I WAS the youngest of three girls, so I became the boy that Dad never had,” Angela Dow says with a laugh. “I’m the tomboy of the family.” 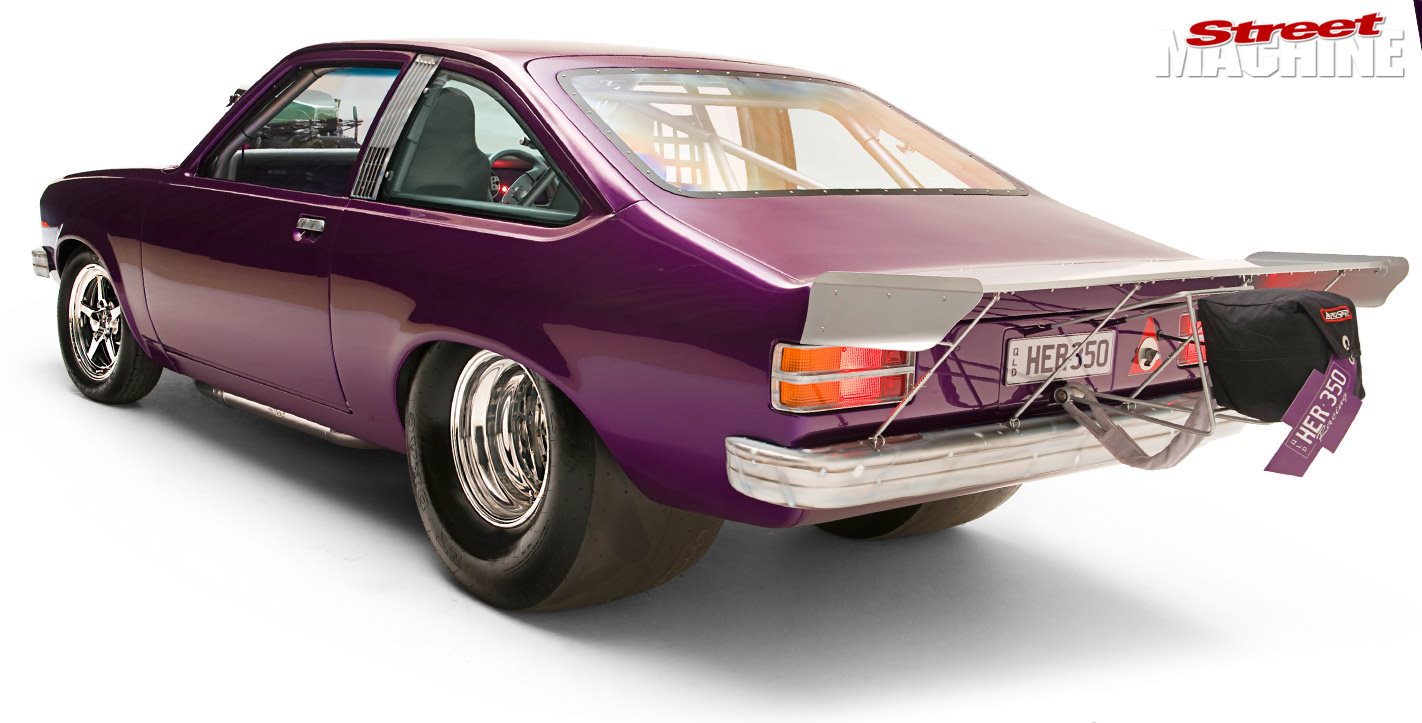 She’s certainly never far away from high horsepower machinery. During the week she’s a trainer/assessor and heavy equipment operator at New Hope Coal’s Jeebropilly mine but when the siren sounds, Angela’s thoughts are on her blown and injected Torana.

She bought the LX hatchback as a rolling shell already set up for a small-block Chev, when she was 20. 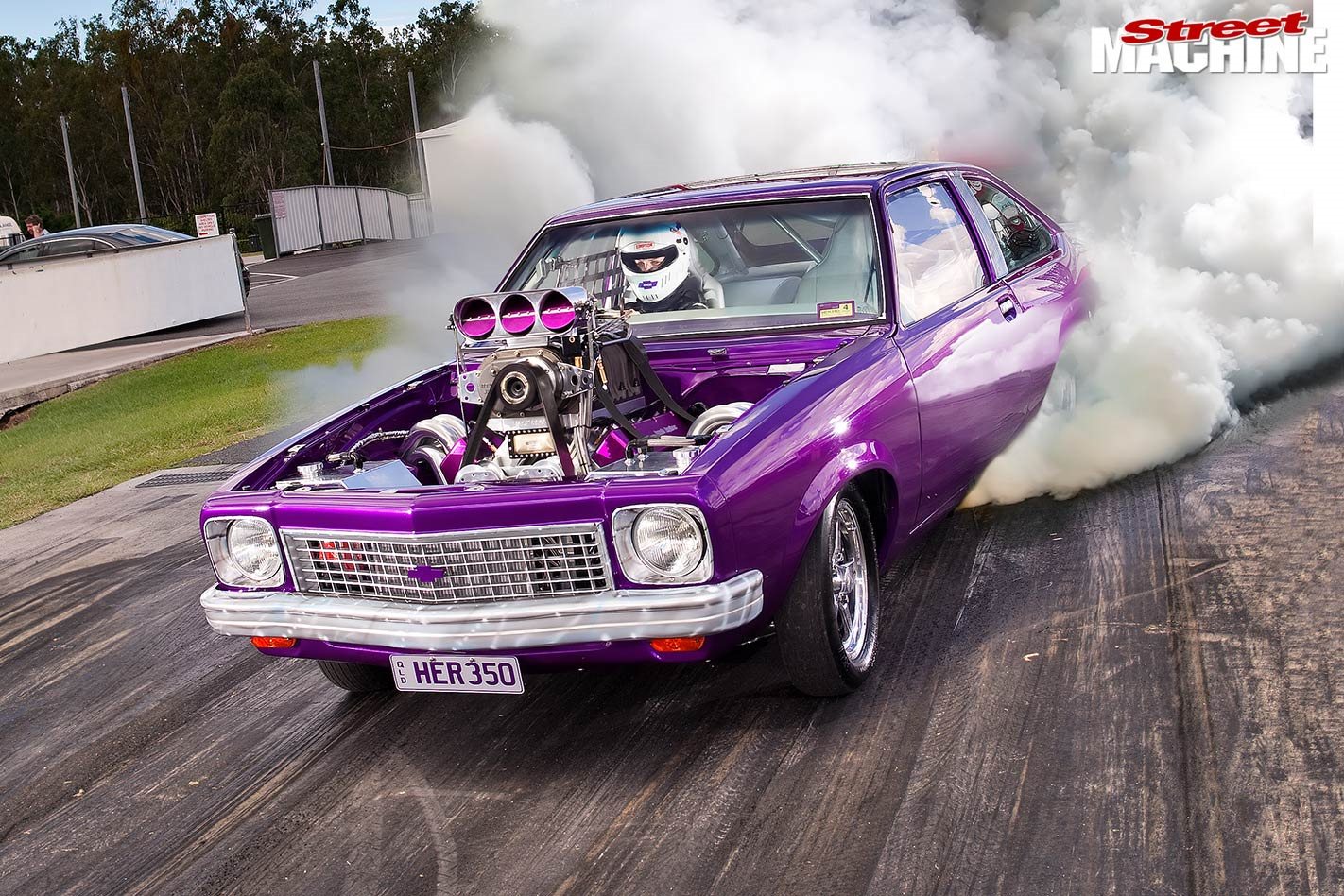 “Dad built what was meant to be a 500hp street car engine — it ended up making 670hp on the dyno. It ran low 10s, naturally aspirated.”

“It was mainly to stop her from racing on the street,” her dad, George, explains. He’s an equal partner in the car and clearly respects what she does.

“Ange should have been a boy — she’s got bigger nuts than me! I drove the Torana once around the block and it scared the shit out of me.” 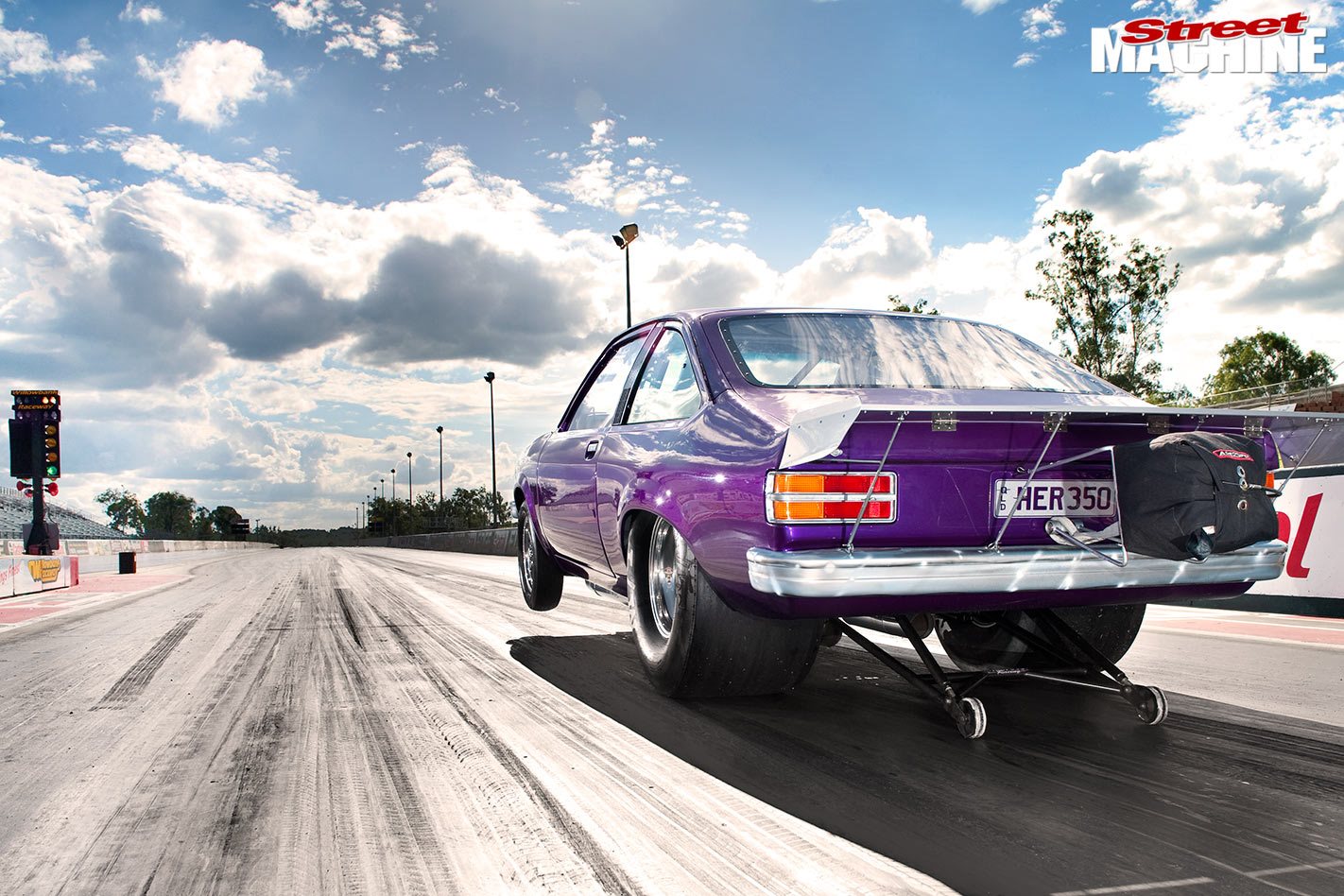 We first featured Angela and her blown LX in August ’05, when she was knocking on the door of an eight-second pass. Not long after that, they stepped the blown Rodeck up in power and ran a best of 8.16@169mph.

“When we first got it going, it had three per cent overdrive. I changed it slowly — every tooth was about an extra three per cent. The last time we ran the car it was around 13 per cent and that was the best it ever went. Every time we changed it, it’d go quicker and quicker.”

A desire to lighten the car and improve its looks prompted a two-year rebuild. The finished product was unveiled at Summernats 22 in the Elite Hall, before Angela hammered the competition in Tuff Street, taking out the Comp Tuff Class. 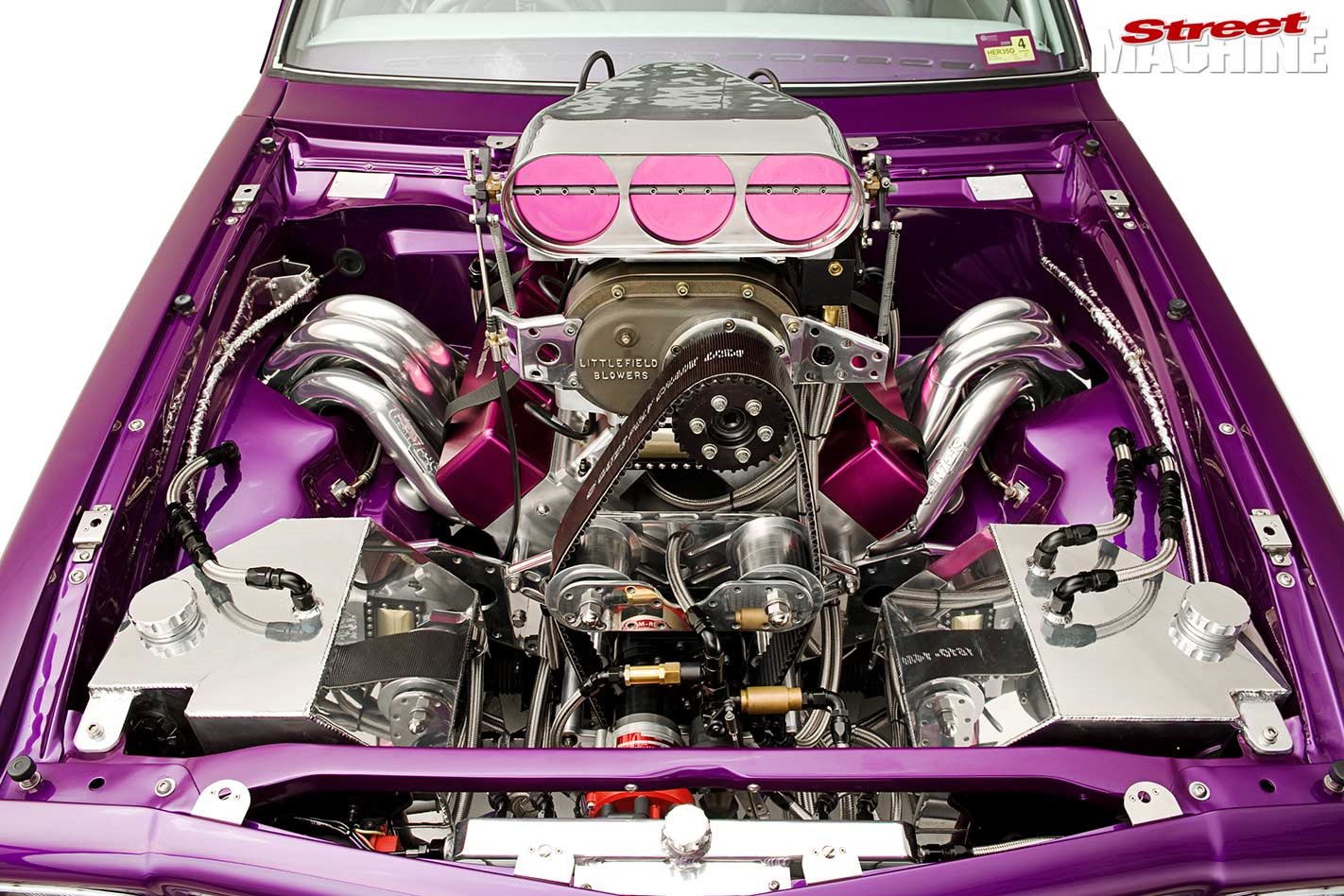 “It’s always been a dream of mine to enter the car in Tuff Street,” she says. “I had the option to put it in Elite but I said the whole way along that it had to go in Tuff Street.”

Prior to the rebuild, the hatchback weighed 3240lb with Angela in the seat. So what does it weigh now?

“I don’t know,” George says. “I’m hoping it’s lighter but what we took out I probably put back with all the billet stuff.”

‘The billet stuff’ isn’t just bling. Heads, rocker covers and blower manifold — it’s like the top end of the motor popped out of a milling machine. 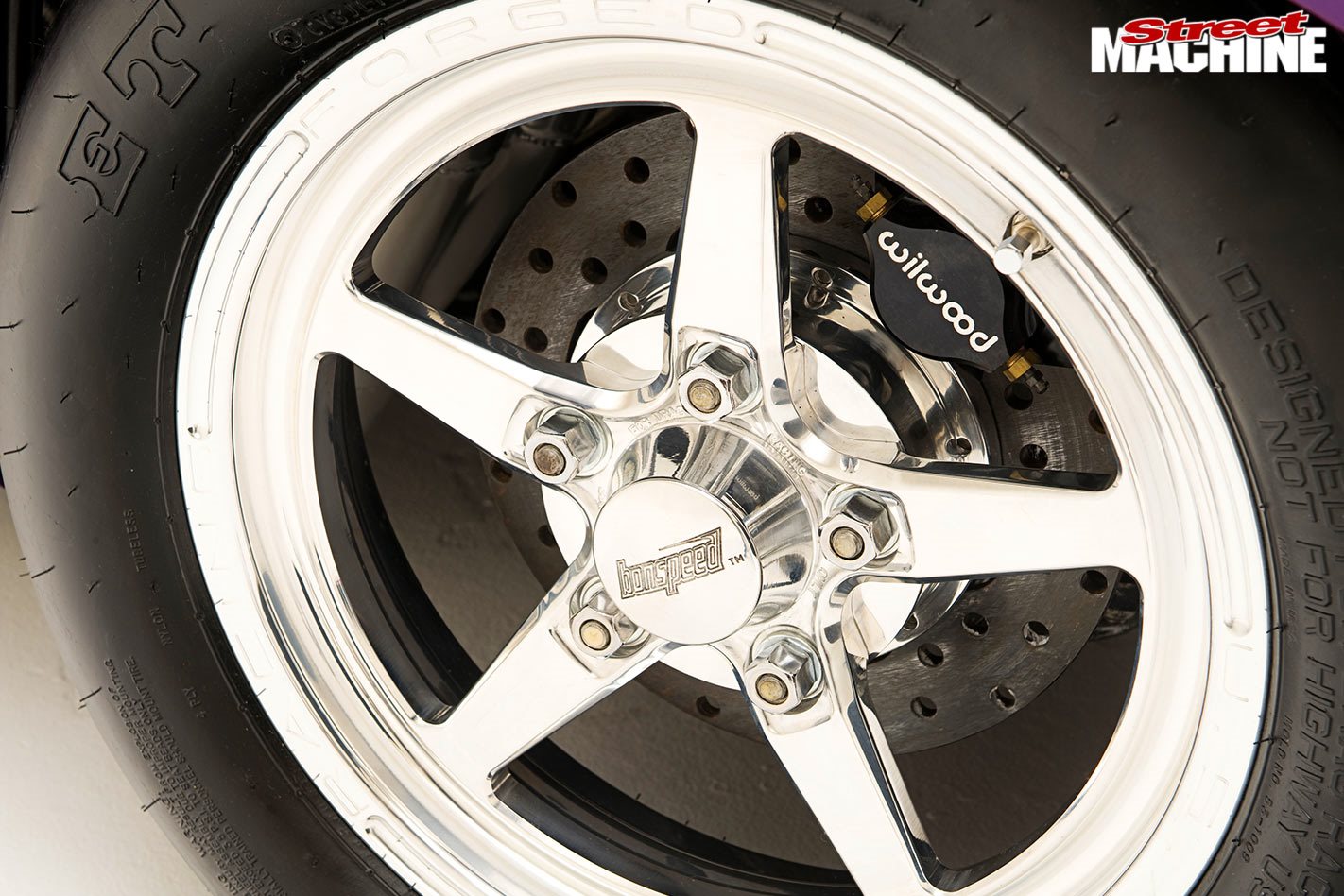 The heads are super-trick JB-1s carved from the best grade aluminium and made in Australia by Steve Jack, at Jack Bros Engineering. They’re one of only three sets made so far and these differ to the others, so they’re unique.

“I took the heads to America,” George says. “One of my mates, Dave Jack, is in New Jersey. He CNC’ed and ported them over there for me. If I told you the flow figures you’d say: ‘Bullshit’ — they are huge.”

But where do you find rocker gear, valves and all the other bits for unique heads? You get them custom-made. “If you heard how much the rockers cost to get made, you’d fall over.” 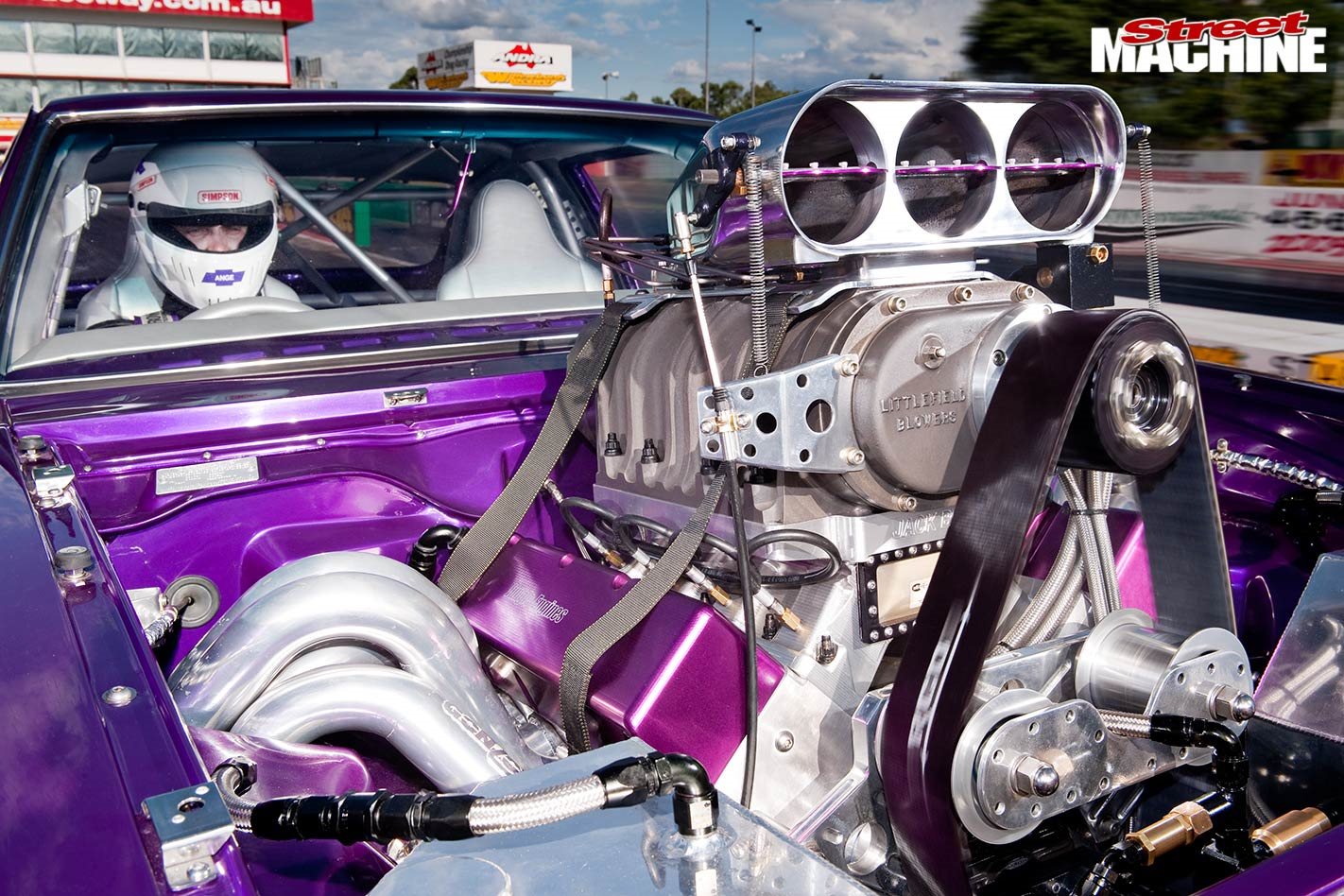 The intake manifold started life as two 40kg blocks of aluminium welded together and trimmed. At 28kg, a little boost isn't going to hurt it

But not all the cost is dollars — a huge amount of George’s time has gone into the powerplant. It’s not like they could pluck rocker covers off the shelf, so George carved them from solid billet, using a milling machine. No CNC programs, no farming it out; just three months’ worth of Saturdays whittling blocks of aluminium down.

“I do it as a hobby — if I didn’t like doing it, I wouldn’t,” George says. “And Ange wouldn’t be able to afford to pay someone for the hours I put into it.”

She knows it. “The labour that Dad has put into the engine — he’s a perfectionist and I certainly couldn’t be running at this level without him. He’s not just my dad — he’s my best mate.” 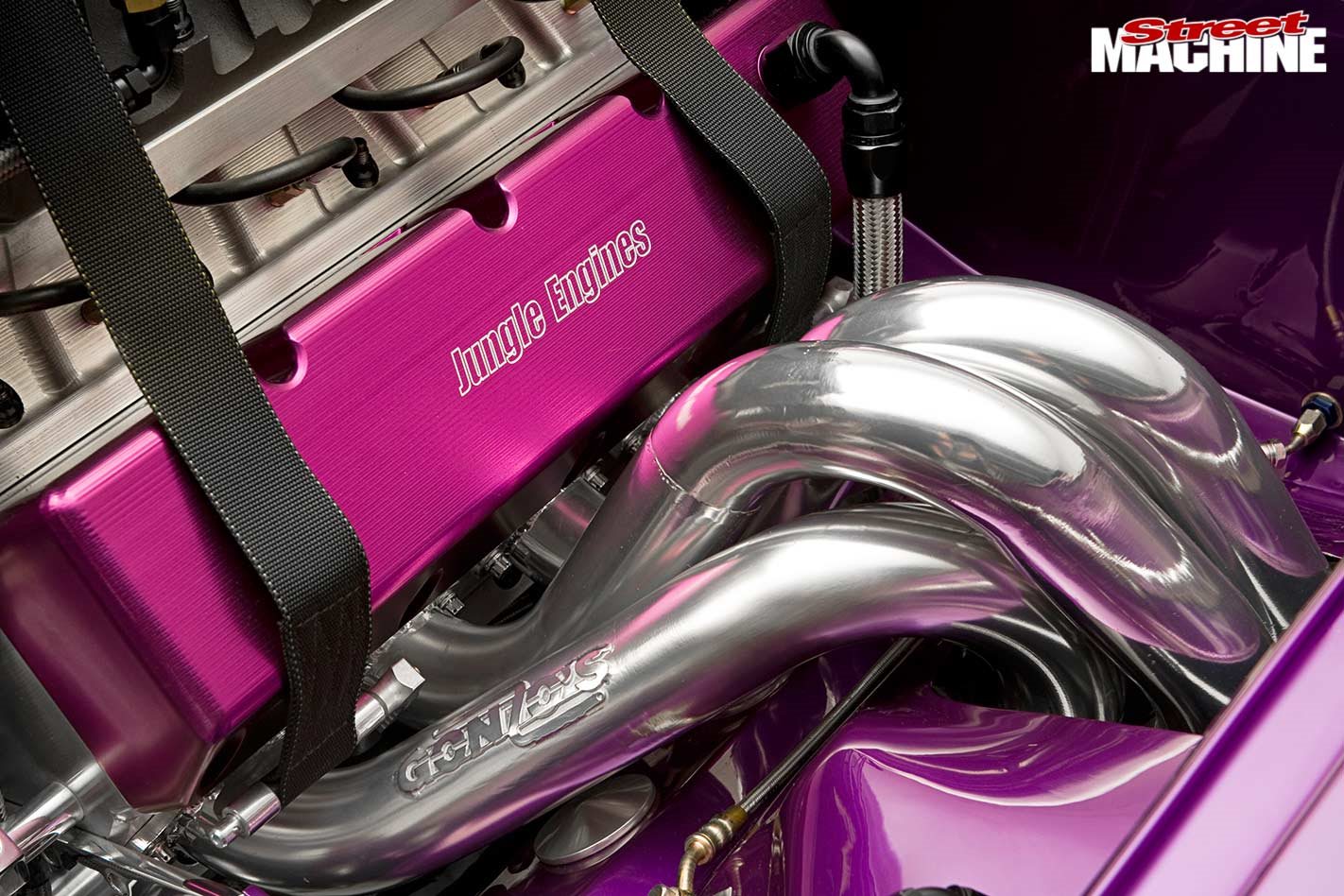 Down below the Littlefield blower, which is set at 20 per cent overdrive in this build, there’s a Dart Little M Block displacing 370ci thanks to a Callies crank, Ridgecrest rods and Ross 9.2:1 forged pistons. With that kind of squeeze and a high-helix 10/71 up top, this 1500hp monster runs on straight methanol, set up by some of the best in the business, like experienced Top Alcohol campaigner Steve Reed.

“Steve did the base tune for us,” George says, “and we did all the plumbing. She’s running pretty fat at the moment but I’m hoping it’ll run into the sevens; I’m pretty confident it will.”

While the engine is George’s domain, the rest is Angela’s doing and he’s proud of what his youngest daughter has achieved. “She puts 100 per cent into it, that’s for sure. It must be in the DNA or whatever.” 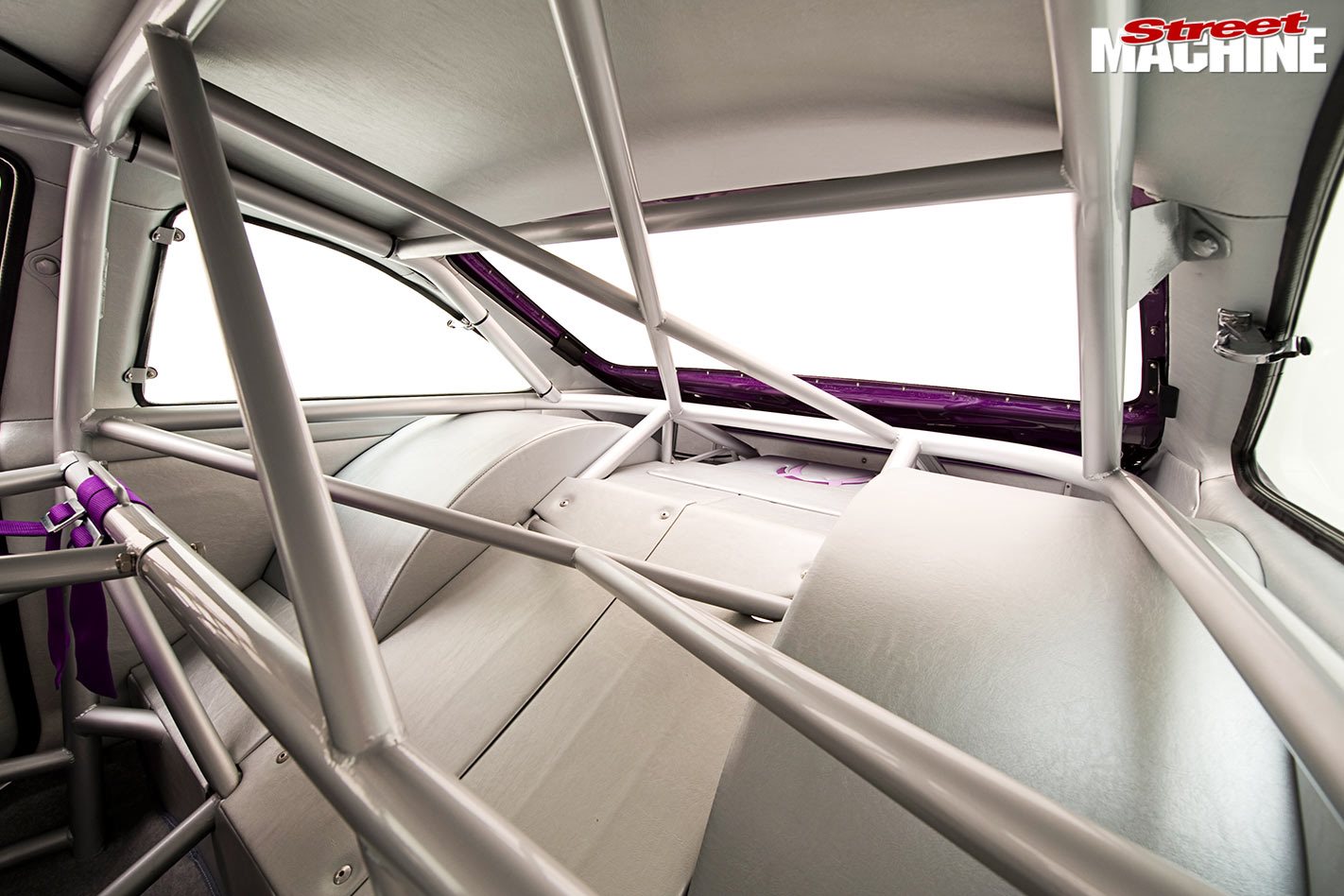 More bars than Taronga Zoo. The tubs and 'cage are as before - luckily they made the tubs big enough to take 16in slicks in the first place!

“I like being actively involved in the car,” Angela says. “I always wanted to paint it a really bright purple and the silver interior really makes it stand out. I just wanted to make it a lot more sleek-looking.”

Inside, the old RCI seats remain but Jamie from Sewfine has covered them — plus the door trims and the custom dash — in silver vinyl with purple inserts. George bent the dash up out of steel. “I probably should have made it out of aluminium but the bender was set up for steel that day,” he says.

The rest is your usual street car fare, with Auto Meter gauges and a B&M shifter, though most streeters don’t have a parachute release hanging from the roof.

The ’cage and tubs are as before but a pair of 16in-wide Mickey Thompsons replaced the old 14.5in rubber. The brakes were upgraded too, with Wilwood discs and calipers replacing the HQ gear up front, while the existing Wilwoods were retained on the rear. That rear is still a 35-spline nine-inch but now with 4.56 gears. However, there’s a sheet-metal diff in the works. 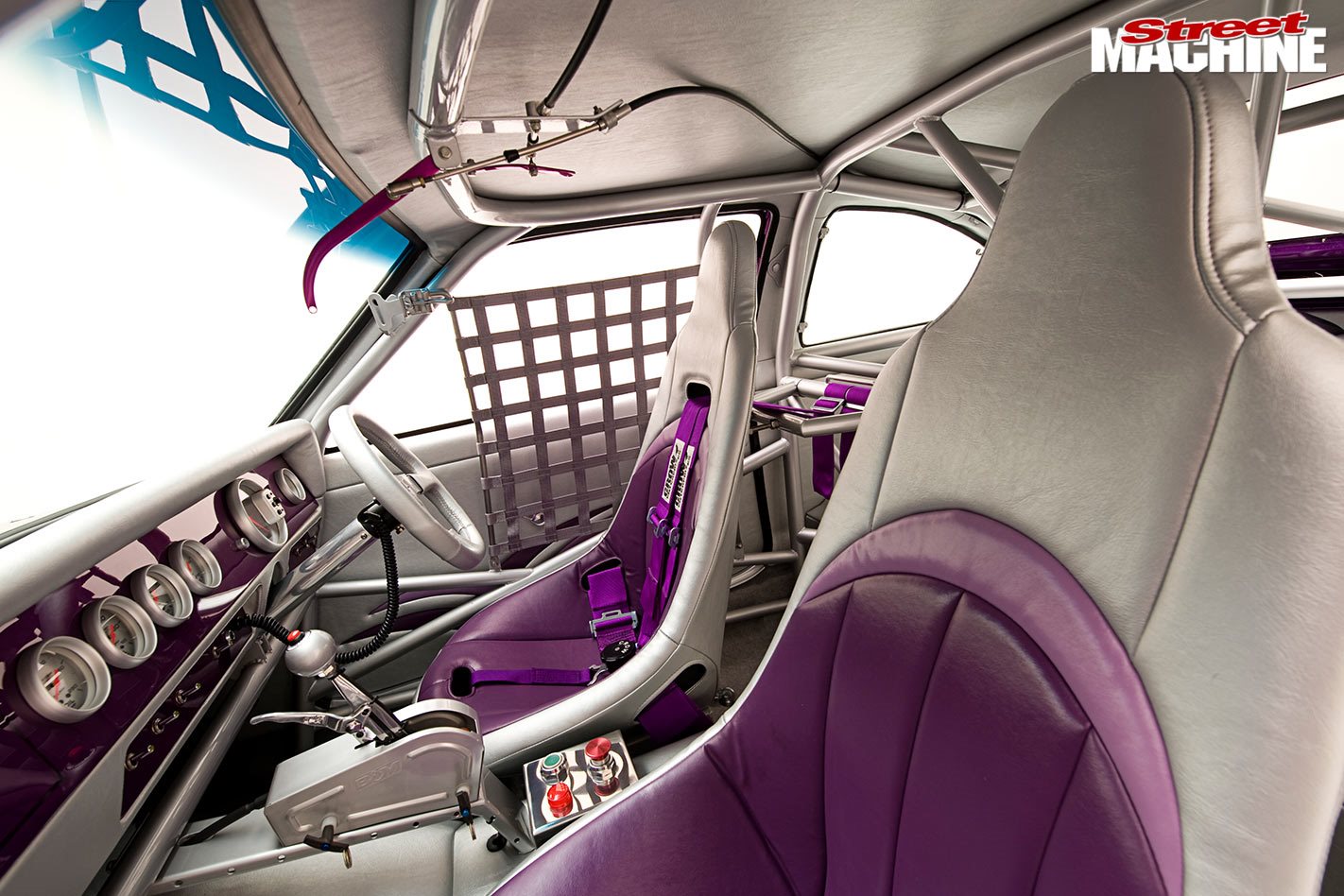 The big red button kills the power while the green button fires the engine. Even these little details are immaculately presented

Bodywise, the rear hatch is now fibreglass, as are the bonnet and bumpers; the rear side-vents are still glass, as is the windscreen, but the doors and hatch now sport Perspex.

Peter Wells was responsible for the paint and airbrushing on the bumpers and headlight surrounds, a process that took some six to eight months.

“He does everything by hand; he’s from the old school,” Angela says. “You can see the end result yourself — it’s immaculate. The work he does is phenomenal.”

With the car looking so much prettier than before, you might think Angela’s future lies on the show scene. Don’t panic. 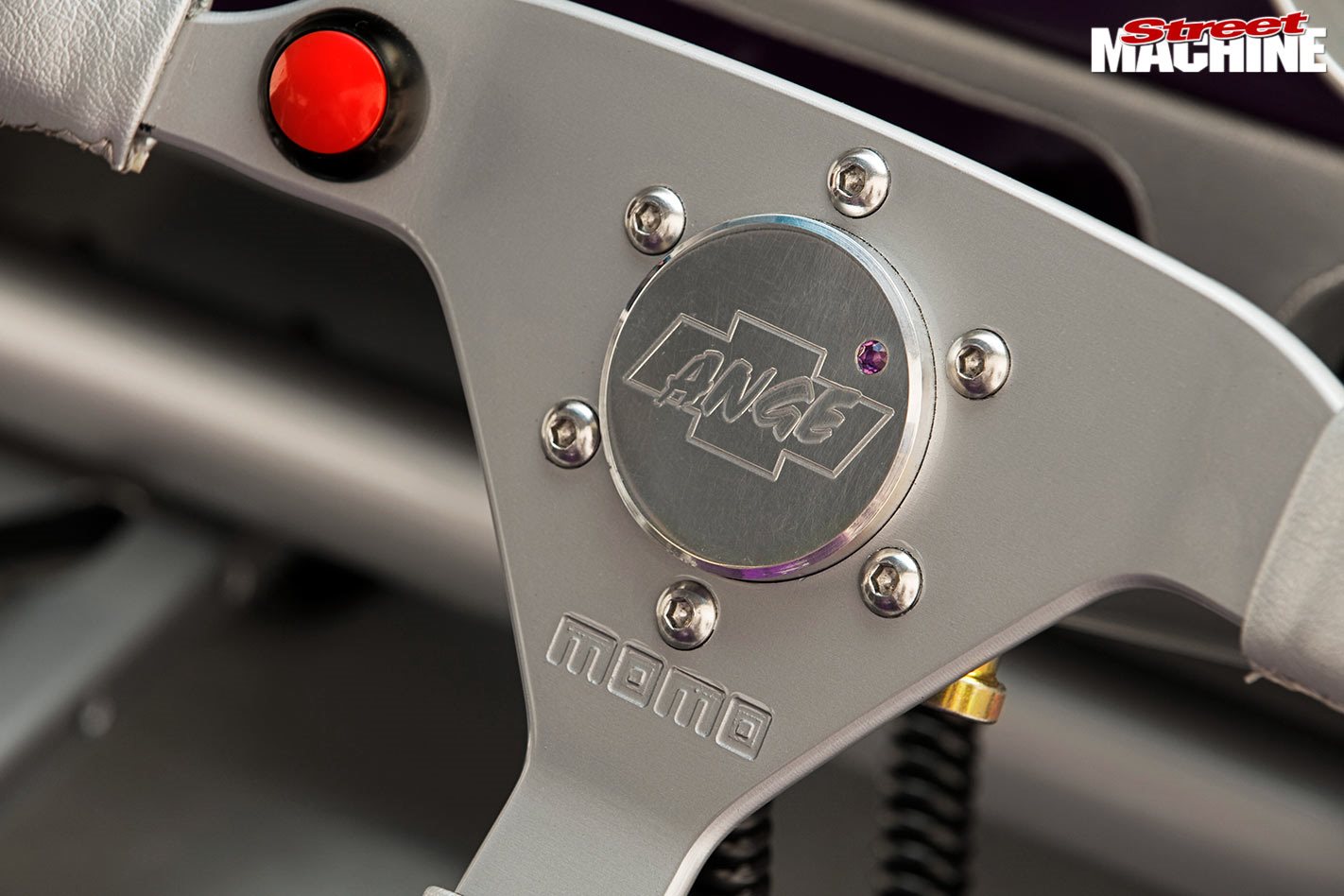 Little touches like 'ANGE' engraved on the steering centre cap make all the difference. Inset into the cap is an amethyst, to match the purple paint

“While we might do the odd exhibition event, the car is aimed at the Streetcar Shootouts and, if it’s fast enough, I’ll enter it in Supercharged Outlaws,” she says.

Going head-to-head with full-on drag machines in an overpowered streeter is a tough gig but Angela wouldn’t have it any other way — she just loves to drive.

“It’s not like a race car,” she says, “because they’re built to run straight. I like the feeling that you’ve still got to stab and steer it down the track.” 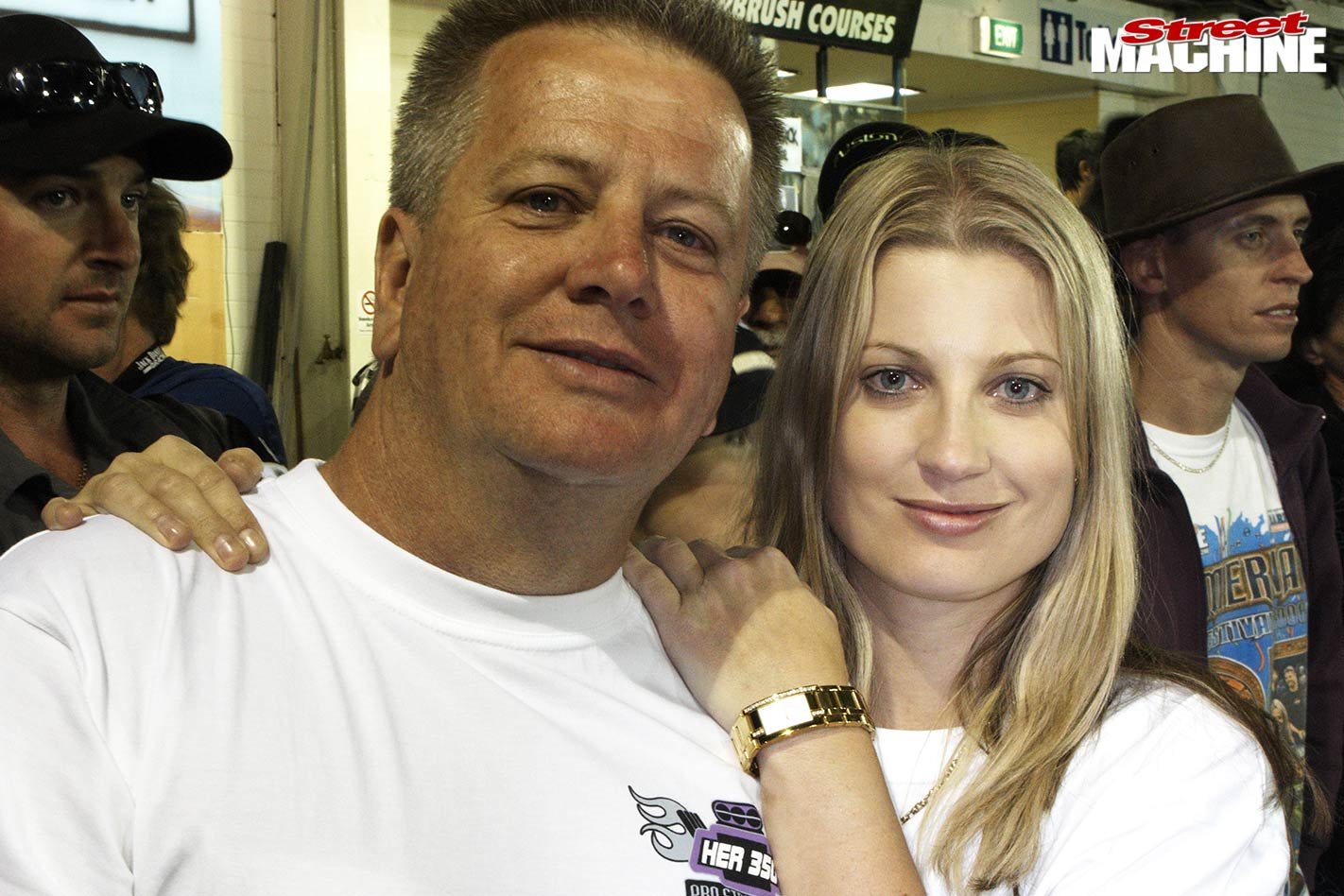 Angela and George at the car's unveilling at Summernats 22

She only laments the fact that the governing bodies in Australia haven’t got together and settled on a uniform set of street car rules.

“I’d like the organisations to join forces or work together and get a calendar of events together around the country. I feel that the Pro Street and Streetcar Shootouts could be huge but until we all get together, merge the rules and move with the times it’s not going to take off.”