THIS article on Steve Edsall’s legendary XC Falcon ute was originally published in the July 2011 issue of Street Machine magazine.

MOST tough streeters are built – you find a cool ride, come up with a plan and the car disappears for somewhere between six months and 10 years. But a rare few evolve instead. Mutations appear between events; tubs here, a blower there, some fresh paint. That’s how Steve Edsall’s XC ute came about. It’s been kicking arse all over Victoria for years but every time we see it, the old Falcon seems to be just that little bit better. 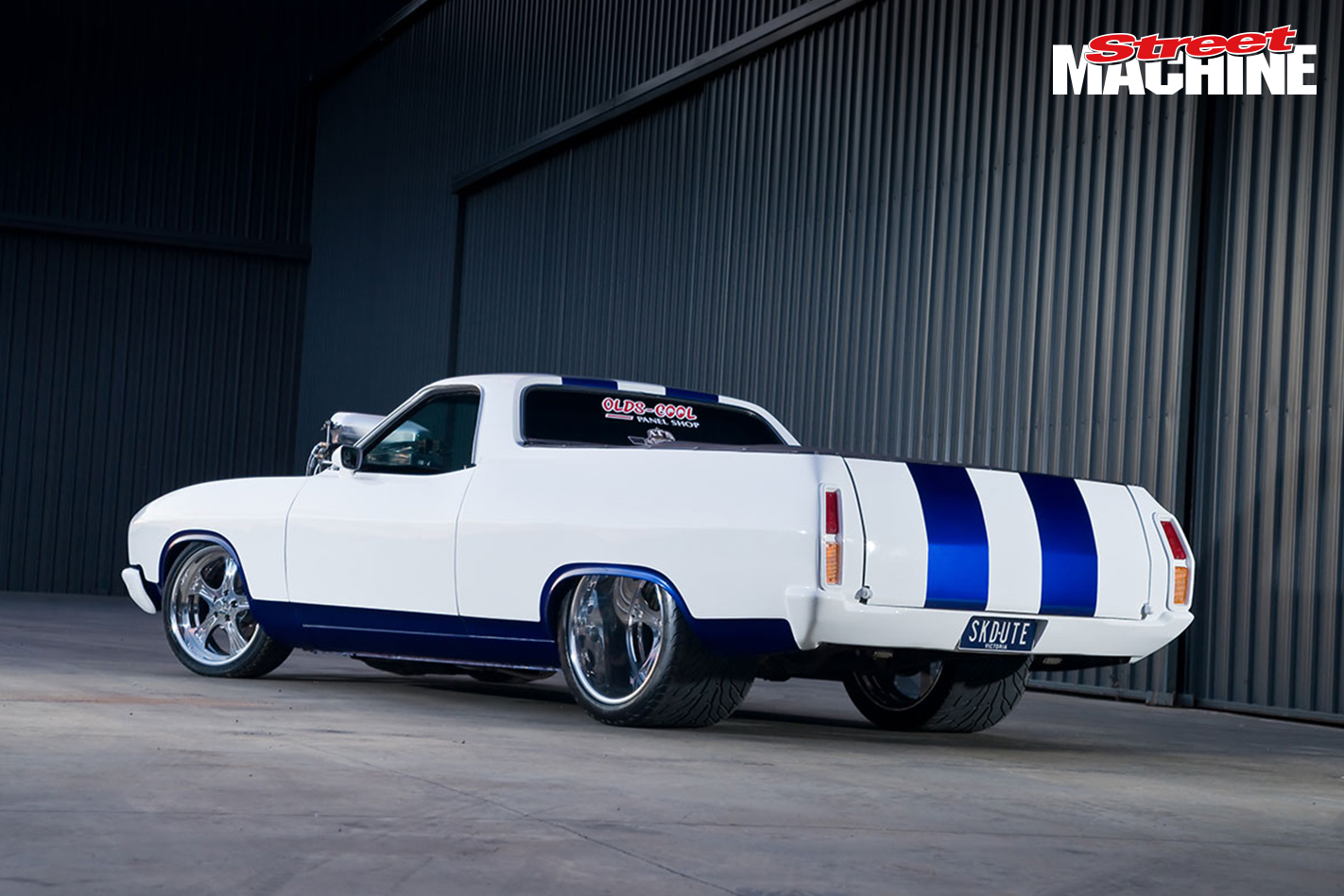 It began when Steve’s dad bought the well-worn hay-hauler. “It was Dad’s street car for years, until we went to a burnout comp where I got the bug,” Steve remembers. “It wasn’t the best but it wasn’t the worst either.” First they stretched the Clevo to 383 cubes and added a tunnel ram, then further down the track they had Doug Rouse, a local truck specialist, swap the Top Loader for a C6 auto.

“Doug’s responsible for a lot of the tricky jobs,” Steve says. “There’s nothing he can’t do.” And for years that’s how we saw the ute – frying tyres with the Clevo singing sweetly. But you know, if you’re gonna be a bear, be a grizzly. If you’re gonna have a burnout car, make it blown. 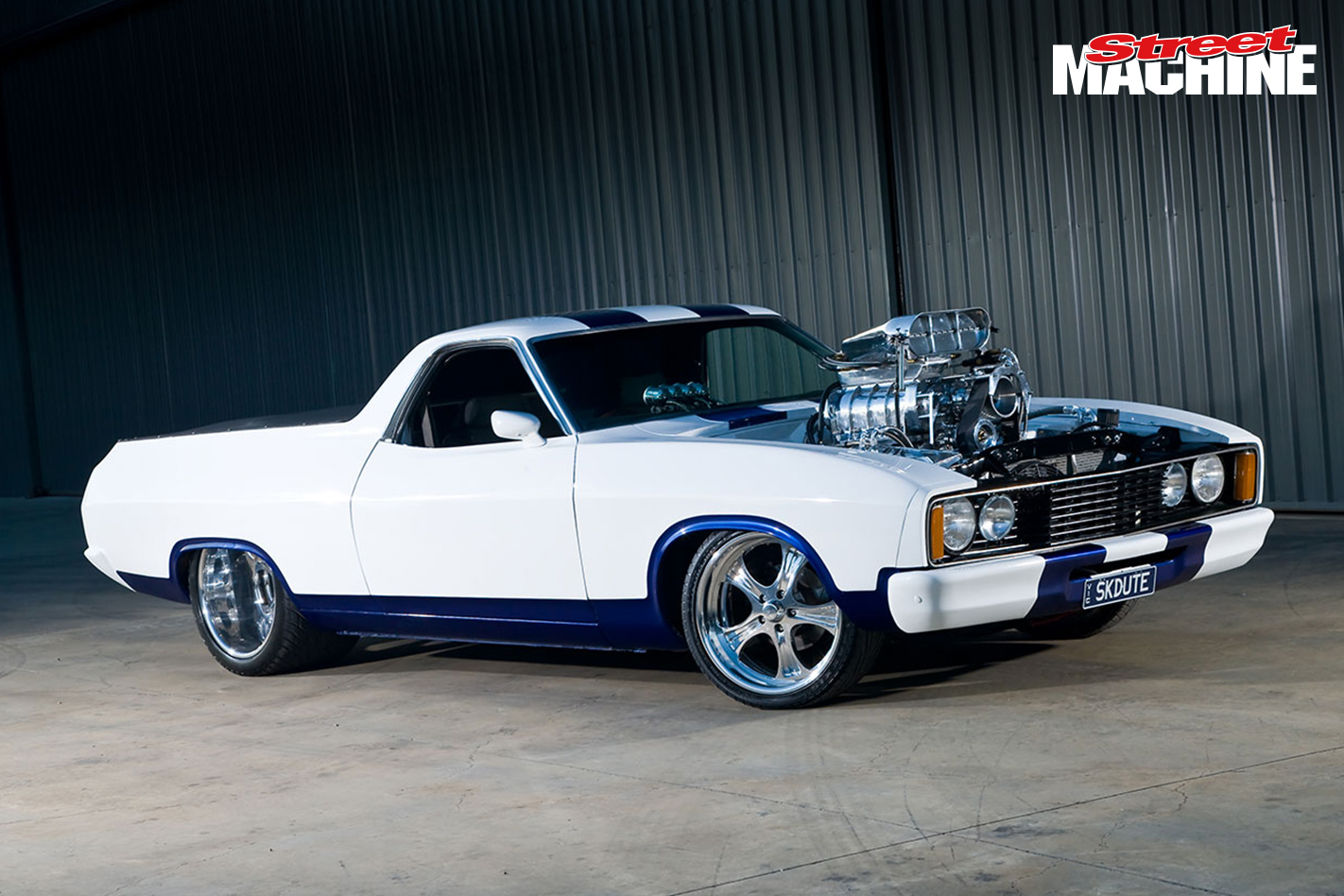 “I found a complete 351 Clevo with a 6/71. I changed to methanol carbs and got two years of torture out of it.” Around the same time he tubbed the rear and replaced the BorgWarner diff with a narrowed 35-spline nine-inch from Shaun McCarroll at McCarroll Diffs, though he never really wanted to get rid of the BW78 rear. “Shaun built me two bulletproof BorgWarners and I always liked that it had one,” he says. But all those fresh new ponies needed something with a bit more muscle to hold them. 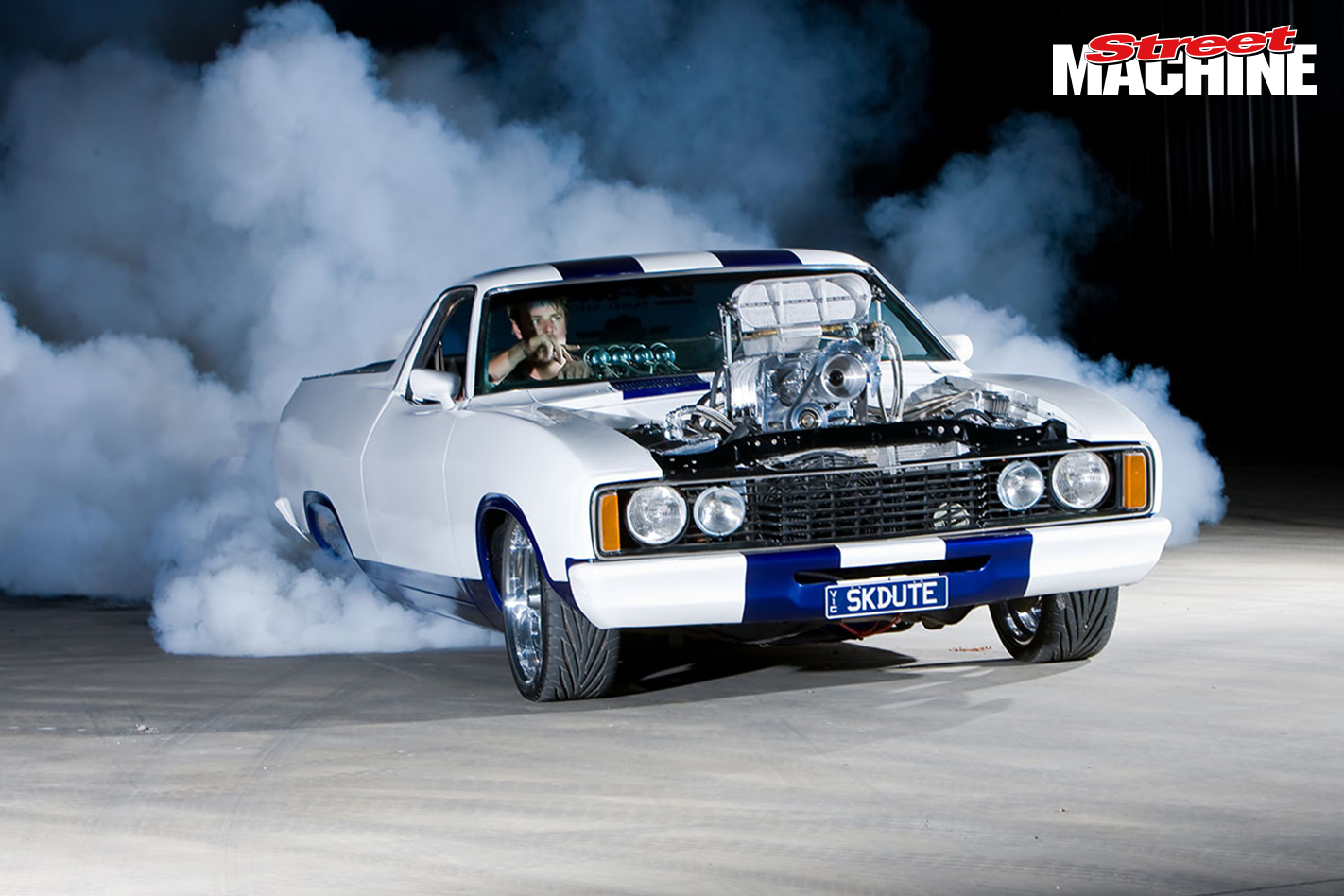 And then Steve decided to get really serious. “Just after the Ultimate Burnout Challenge in 2010 I decided to change the engine and touch the paint up.” The makeover took nine months, but Steve’s stoked. “I wanted something blown and injected. Looks tough and goes killer.”

And after years of tough Clevos, he finally bit the bullet and bought a brand new Dart 351 Windsor. Danny Selva at Selva Racing Power screwed the new combo together and with years of experience building record-breaking engines, you’d be hard-pressed to find anyone better.

There’s no junk here – Lunati billet crank, Crower rods and Arias cold-forged pistons. Throw in a 0.750in-lift Comp Cams bumpstick with Crower roller lifters and the word ‘bulletproof’ comes to mind. Surprisingly, Steve stuck with cast-iron 4V Clevo heads up top instead of trick alloy pieces, but they were heavily massaged by Danny and filled with all the good gear as well. 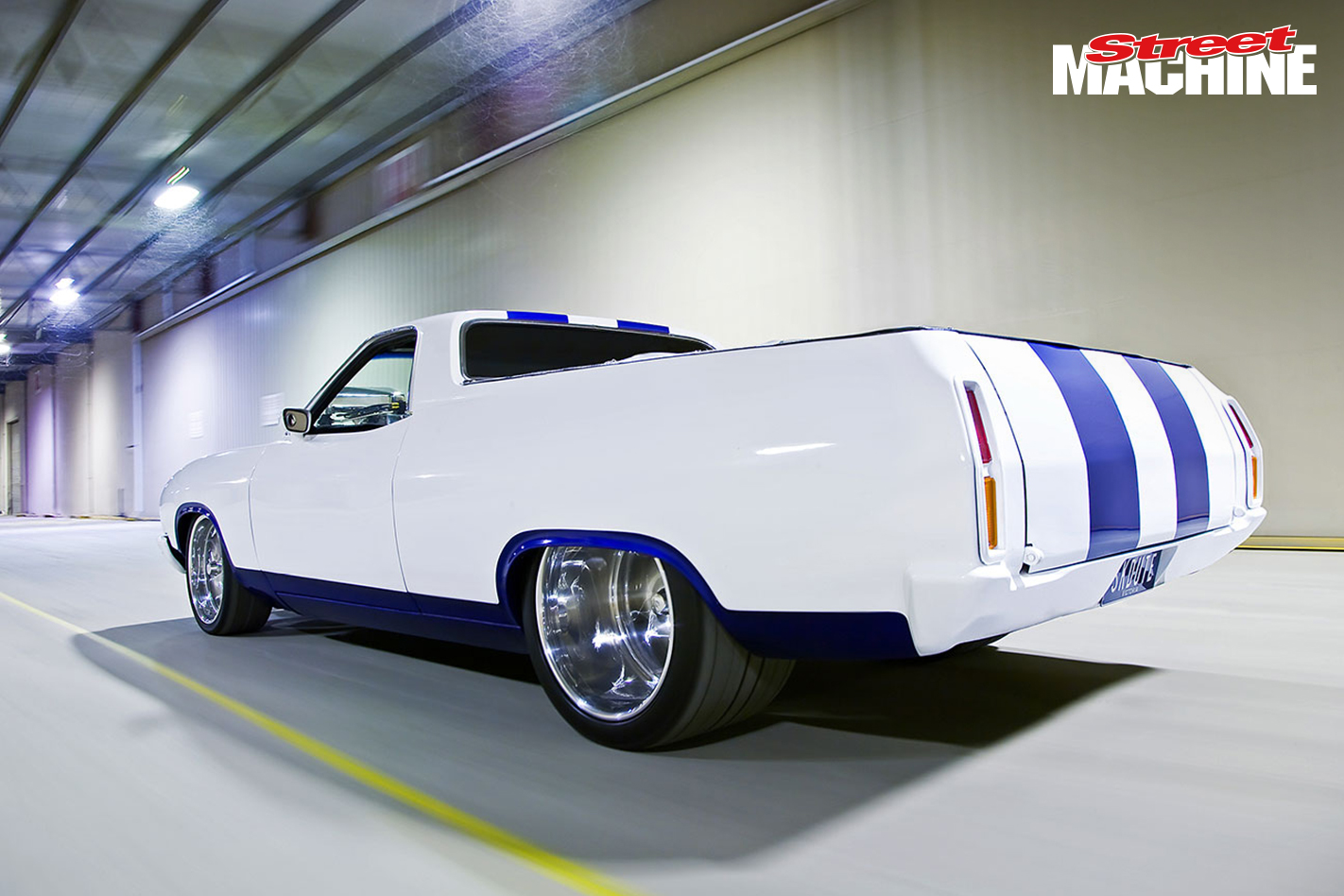 “You can get plenty of power out of the 4Vs,” Steve says, “and I don’t need to lose the weight for racing.” Naturally aspirated with a single carb, the engine pumped out 592hp at 8000rpm on avgas. With the blower bolted on they fired it up with a pair of methanol carbs – and hit the first snag: no matter what they did, it kept leaning out and eventually torched a piston.

“The best reading we got was 900hp at 6000rpm but it wouldn’t climb without running out of fuel; we were at the limits of the carbies. Injection was the next step so I stepped straight up.” He was sent to Rob Ambruosi at R&N Superchargers & Fuel Systems. As the company name suggests, he’s a fuel system guru when it comes to blown engines. 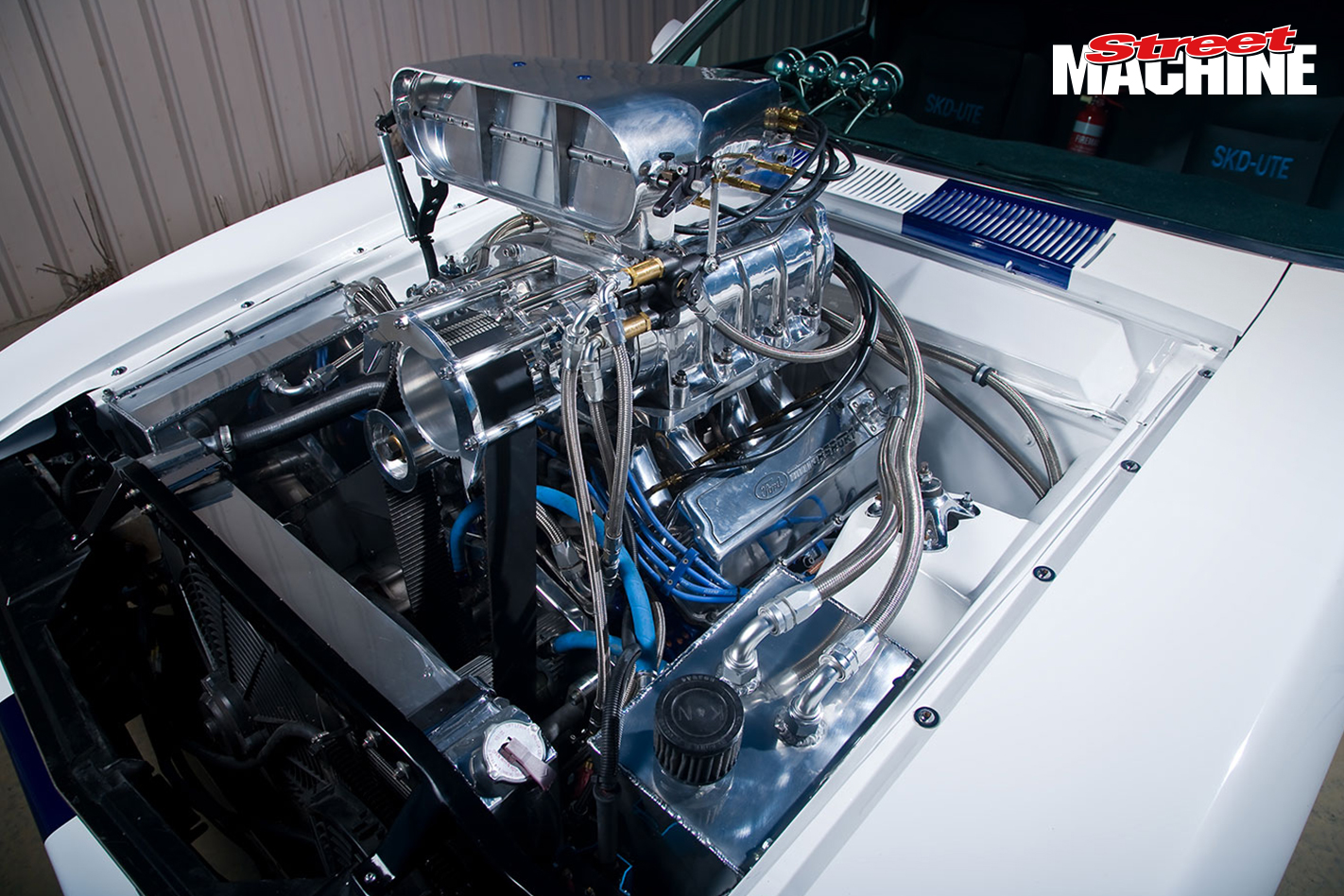 “Rob set everything up,” Steve says. “He made the engine plate and crank support, and set the injection up. Now it sings to 1200hp and it’s still very mild – there’s no point running it on the edge. It’s been perfect; I haven’t had to touch it.”

Backing up the engine is a C6 built by Summernats Burnout Champion Adam Slorach. Any good? “The best trans builder I’ve ever known.” That’s high praise from a serious burnout competitor.

The body was supposed to be a quick respray but in the hands of Jody Vincitorio from Old’s-Cool Panel Shop in Tatura, Victoria, it ballooned into a full rebuild. Given its age, there was some rust to remove, but while he was at it Jody also smoothed over the door handles and side markers, then gave the wipers and the roof-mounted aerial the flick too. With the clutter gone you can really appreciate the XC’s smooth lines. The colour is straight white tinter, with the Cobra markings in a custom blue using three pearls. Who knew a white car could look so good? 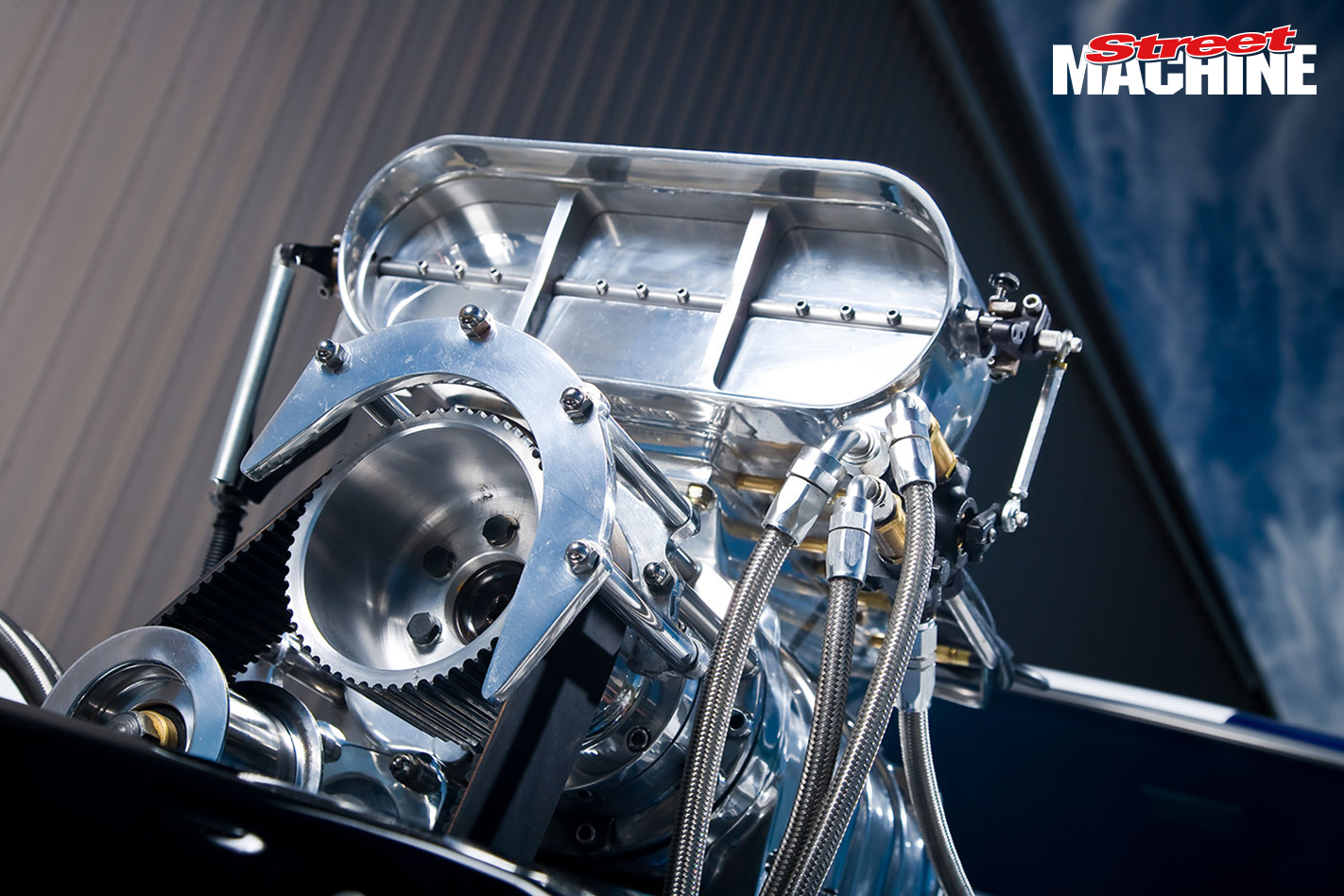 Dropped over a set of Intro Indy wheels – 19x8 on the front and 20x16 on the rear – the whole effect is stunning. The combination of smoothed panels, ultra-fat rubber and that polished mega-horsepower donk up front has created one truly epic ride.

“We picked it up after Rob set up the engine the Thursday before Summernats, and finished it at 2am Friday morning. The first drive was to the burnout track and it ran like a dream all weekend.” 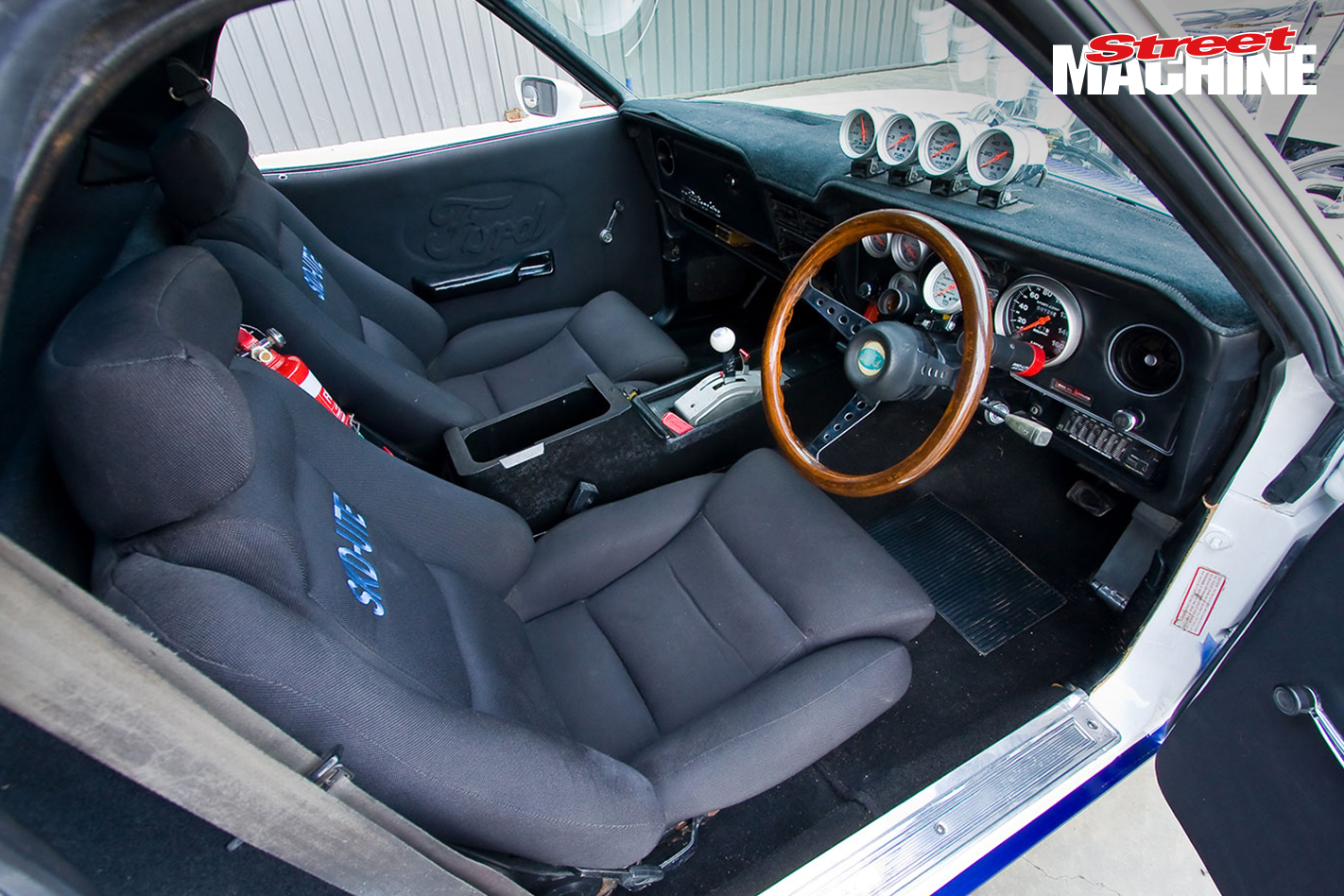 With that big Enderle 110 mechanical pump shifting enough fuel to run a jumbo jet, it’s not exactly easy on the juice though: “You get four laps of the Summernats cruise route to 100 litres of methanol.” There was so much extra power that Steve almost seemed cautious on that first outing at Summernats.

“The throttle cable caused some issues – it was either on or off, just a nightmare!” Despite the teething problems, the wild ute blanketed the pad in smoke and had the crowds on their feet. Then there was the Ultimate Burnout Challenge, where Steve finished seventh after driving from the pad when the oil pressure dropped just a minute into the final skid. 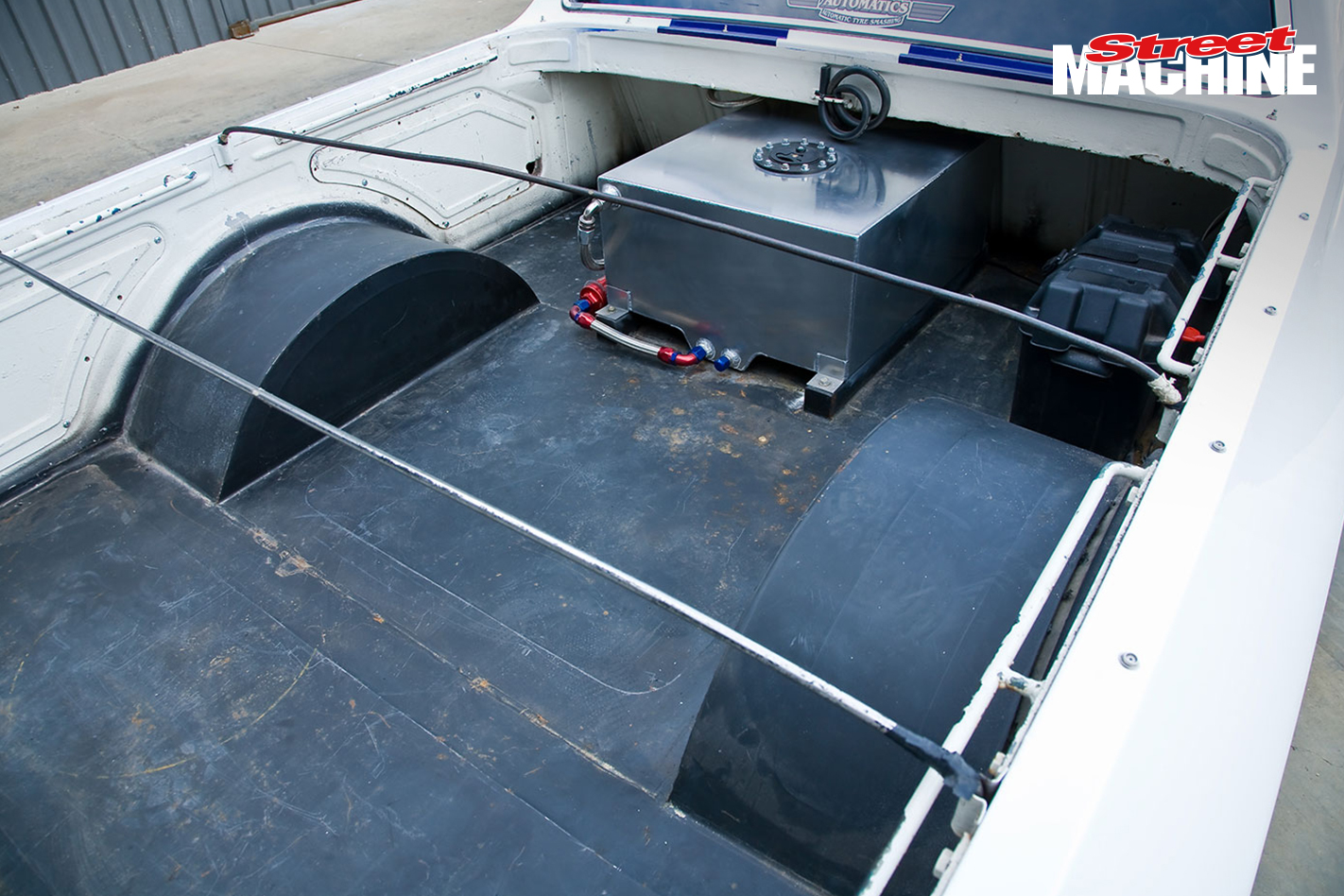 “It was pumping the oil up into the valley and having trouble getting it back to the sump. I saw the pressure drop and decided to save the engine. We pulled it down and opened the holes in the valley, and fitted a new sump as well. It’s fine now.”

With the ute looking so good, Steve’s wondering whether to go full show – he reckons inside the tray is letting it down. “But we had 12 people in the back at Summernats when we were cruising. I couldn’t do that if it was all nice,” he says. It’s a conundrum faced by many car owners over the years. “Nah, I’m going to leave it as it is for now, and maybe slick it up in a year or two.”