KYNAN Hall's DVL XC was the cover car for the May 2015 issue of Street Machine magazine. Since then the car has turned tyres in anger on the burnout pad, although with a few dramas here and there with fire - it is called DVL XC after all. Here's the feature we wrote on the car ahead of its burnout debut. 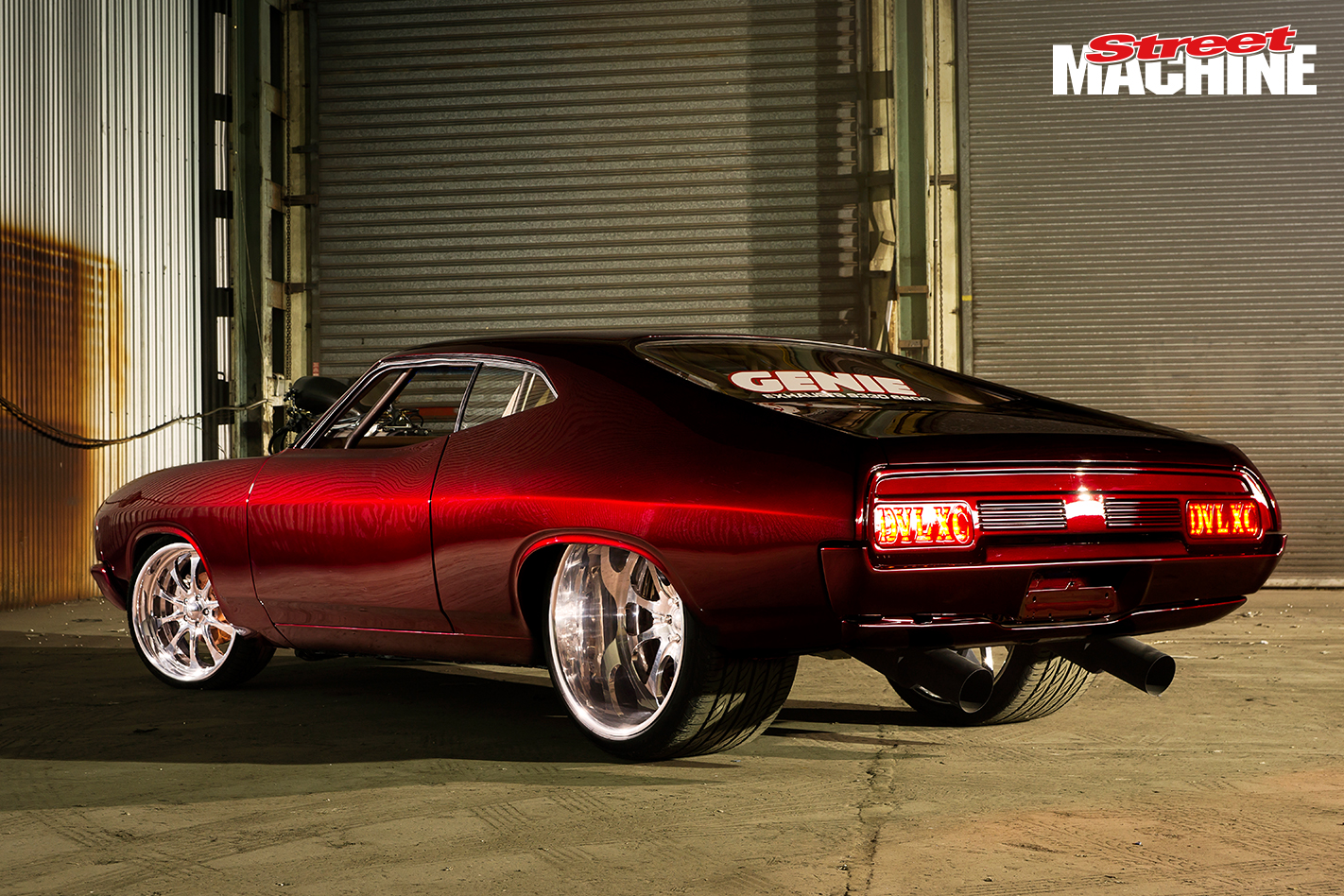 KYNAN Hall hasn’t been near a burnout pad for a couple of years. He’s been laying low while he put together a new car to take it to the guys at the highest level. Let’s get one thing straight – this is not Kynan’s old blue car with a new paint job. Apart from the fact this is an XC and his previous skid car was an XB, there are quite a few differences between the two. Yep, they’re both big ol’ Falcon coupes, with blown Ford engines and big billet wheels, but that’s about where the similarities end. 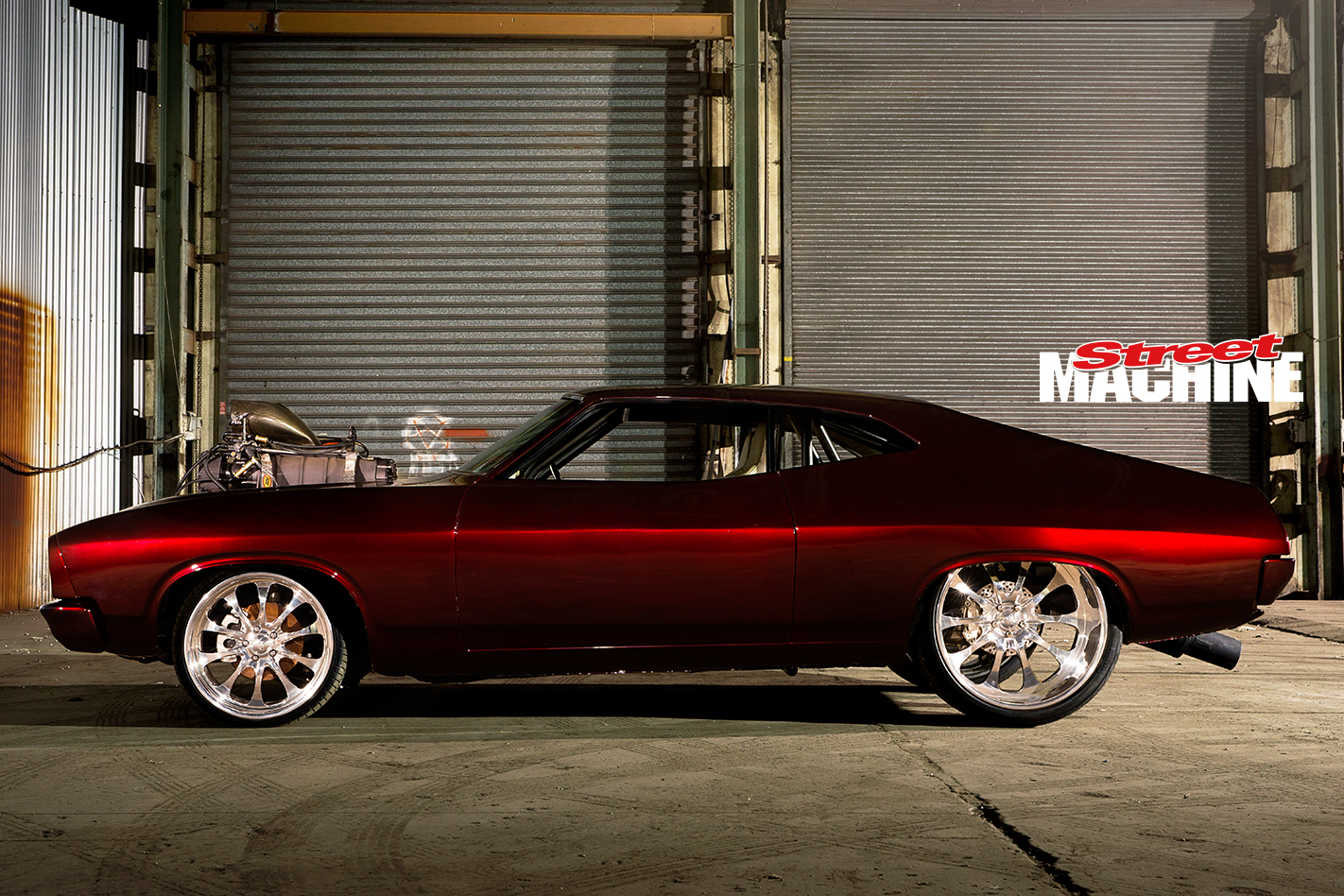 Kynan remembers how he decided to go down the blown route. “I started doing burnouts down at Narrogin Revheads with a mate of mine, Dave Morgan, back in the early 2000s,” he says. “We got talking one day and thought about putting a blower on an XD that we were going to do. One thing led to another and Dave said: ‘Why don’t you put the blower on the [XB] coupe?’ I said: ‘Nah, it’s too nice, I’m not doing that.’ Dave goes: ‘It’s just a bonnet.’ I thought, well, you’ve got a point there. So that’s how it came about. 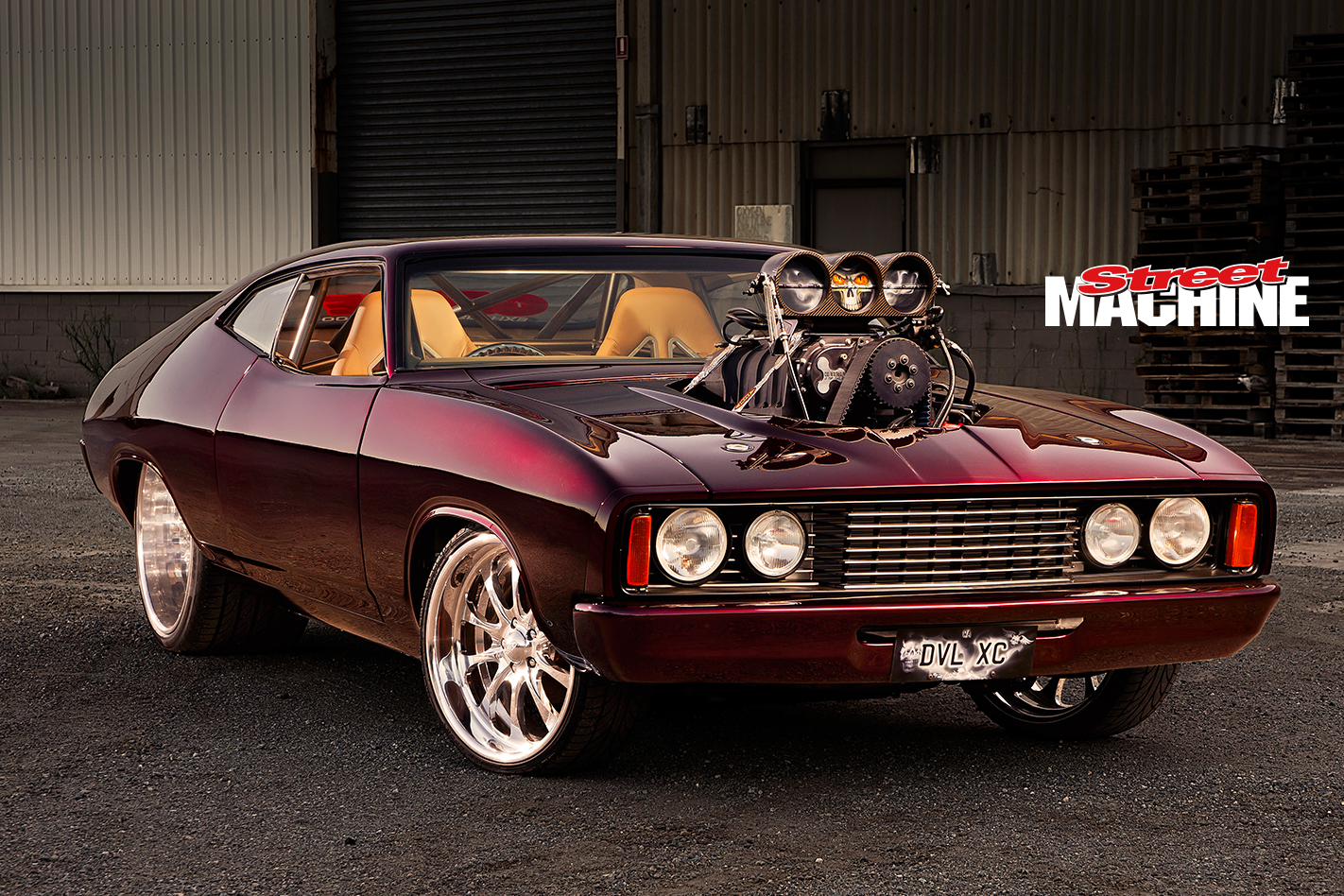 “The first time I took it out I blew the engine up because I had the pulleys around the wrong way – and overdrove the crap out of it. I went on the hunt looking for someone to build an engine and that’s when I met John Napier. I wanted something I could drive on the street and do skids with. All the other engine builders said it couldn’t be done but when I asked John, he said: ‘Yep, we can do that, no worries.’ That was three weeks before Revheads in 2006 and that motor is still going strong. 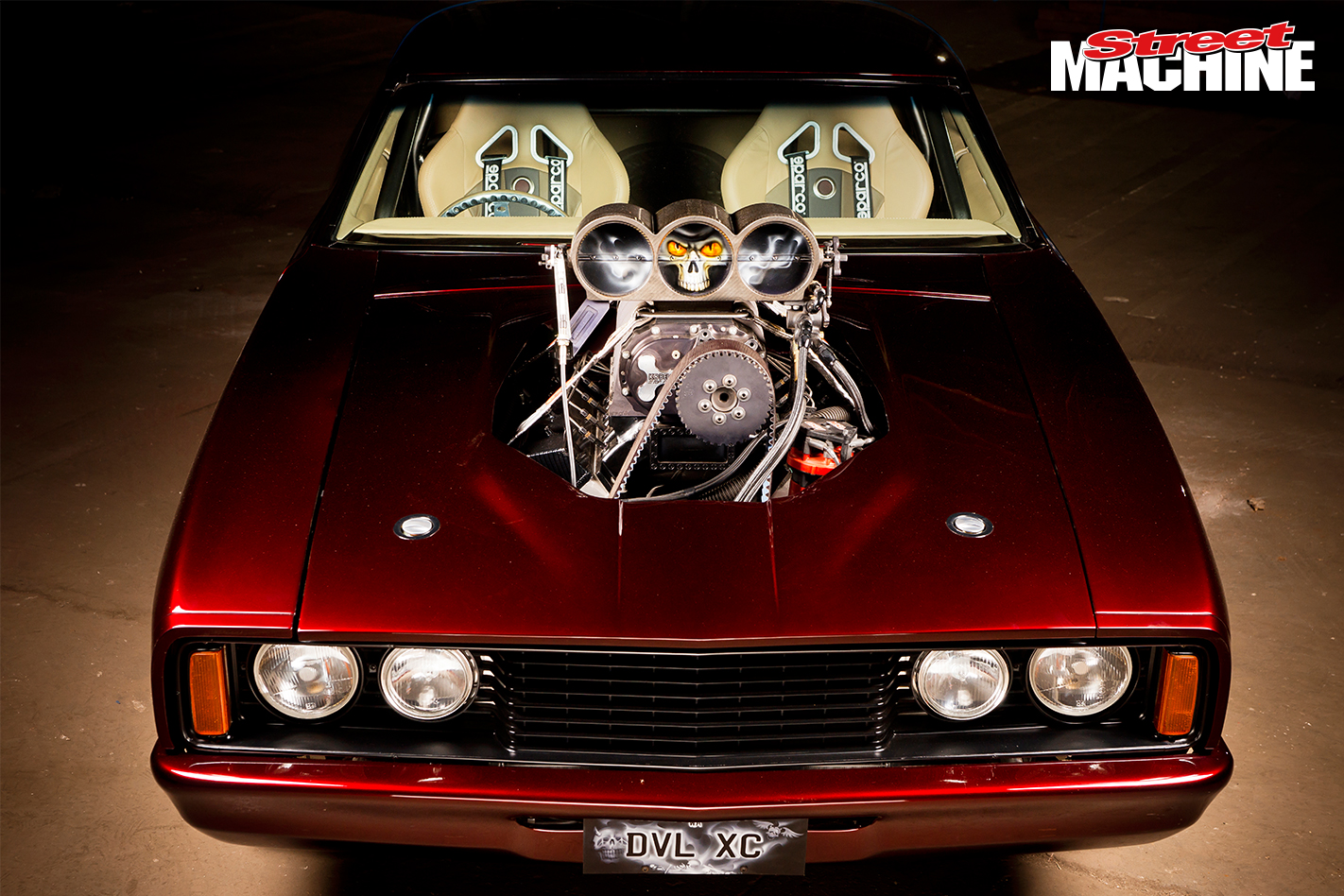 “It’s amazing how much this scene has changed. Back in those days there were only two or three other cars that were blown.”

Things have definitely moved on a bit since those days, and that’s part of the reason Kynan decided to build a new car just for the burnout comps. At one point he was ahead of the pack with his tough blown combo in what is essentially a street car, but people caught up and passed him as engines and blowers got bigger and the West Aussie burnout scene cornered the market on Big & Ugly injector hats. 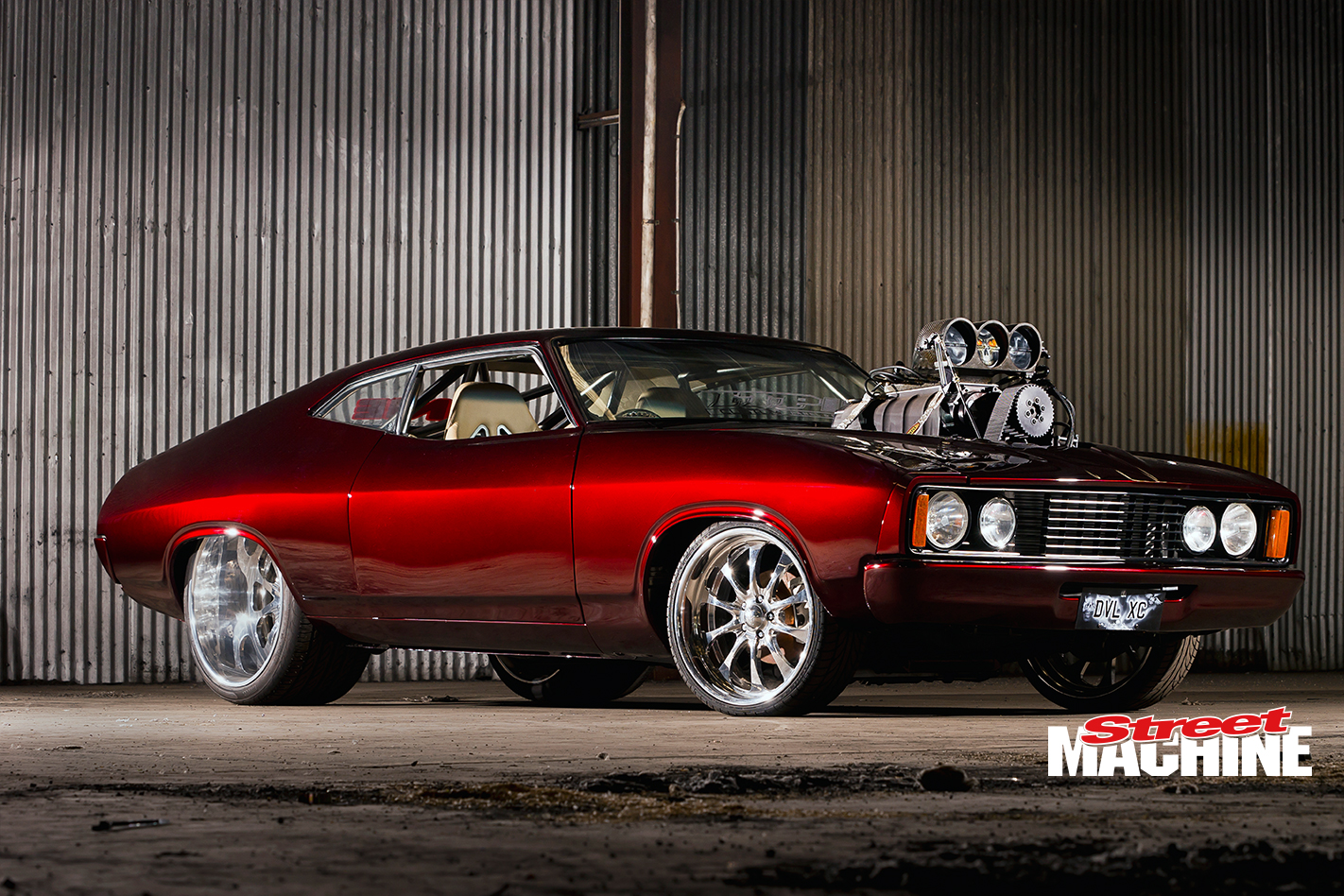 “It got to a point where I was wrecking the car and I didn’t want to keep doing that to it,” Kynan says. “When you’ve got guys like Loader and Nogas building top-quality show cars that do high-end burnouts, that’s where I wanted to be. I was able to be a part of that for a brief period with the other coupe, but there came a point where everyone just went past me. I already had the engine, I just needed to find something to put it in.” 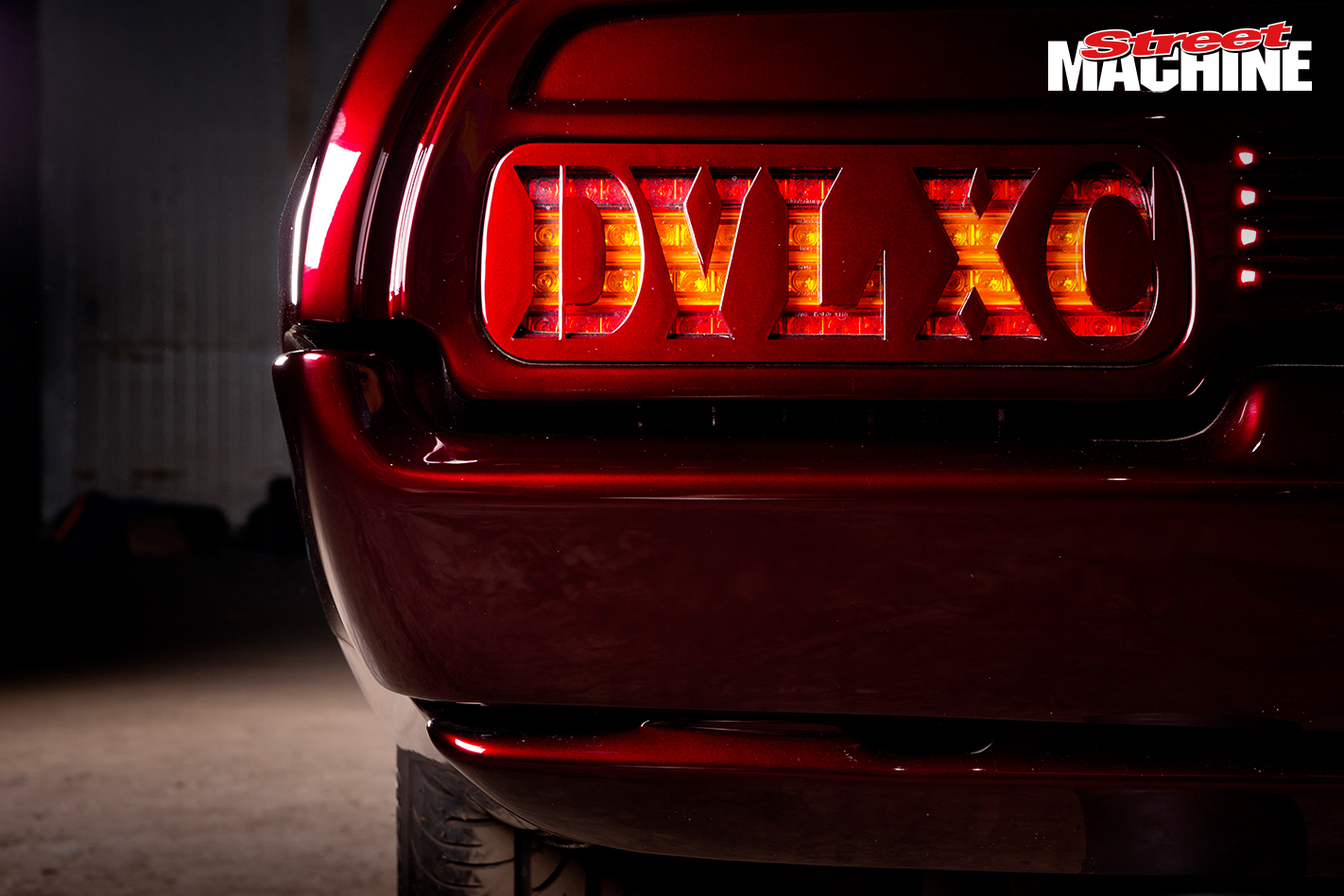 Kynan knew what he wanted – another Falcon coupe, of course – he just had to find one. He actually started off with a different body, but it turned out it was pretty rusty and it would have taken a lot of work to get it up to scratch. Luckily, another came up for sale on the east coast, a complete car – minus engine and box – that was already tubbed and looked to be in pretty good nick. Well, it must have been okay, because we featured it in SM, Feb ’09, when it was owned by Shane Etherington. Kynan struck the deal, hooked up the car trailer and drove across the country to get it. Yep, keen as! 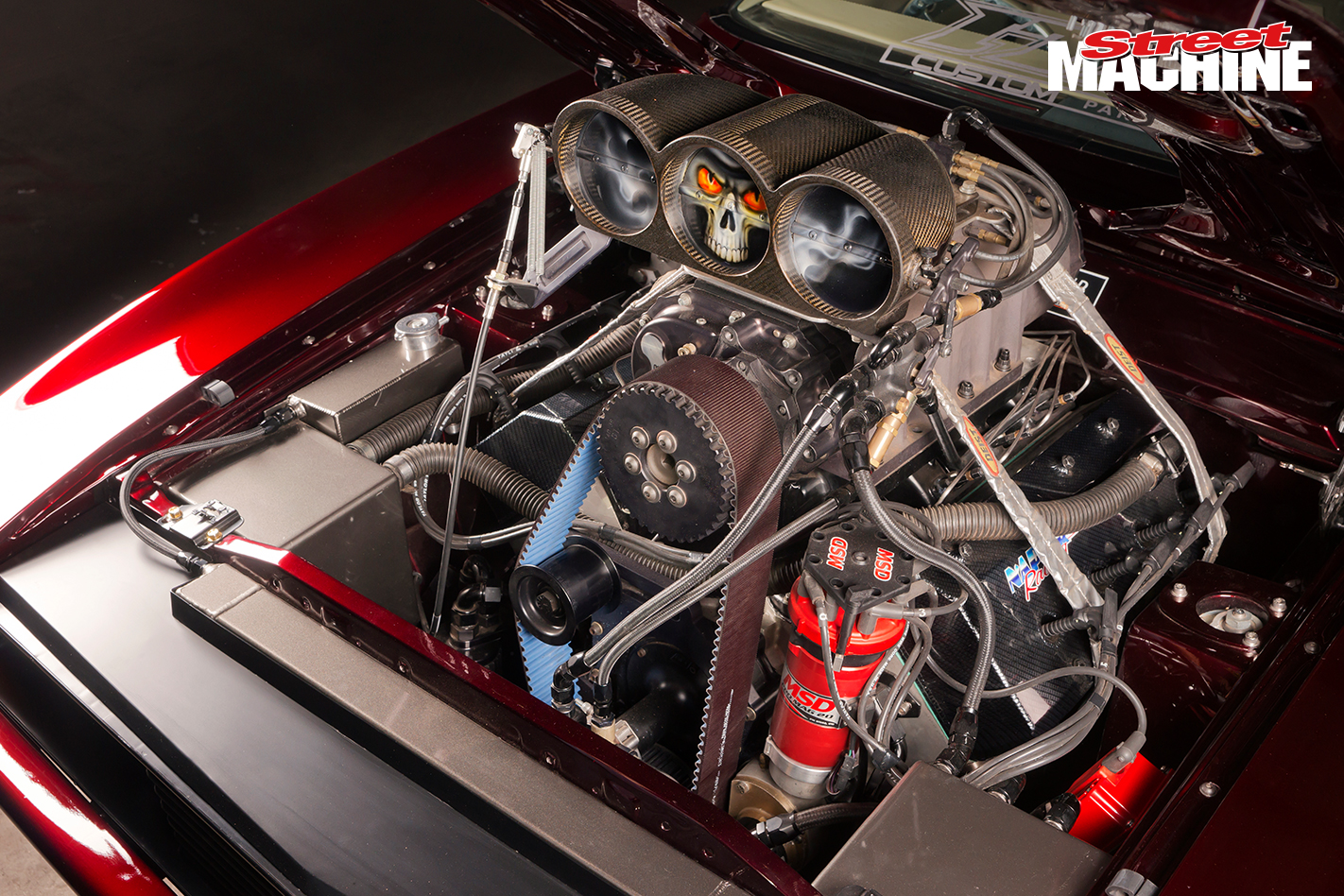 As mentioned earlier, Kynan already had a motor lined up, and not just any motor. All you Ford lovers can put down your pitchforks – this baby may have Hemi heads but it is all Ford, all 526 cubic inches of it. In a nutshell, the bottom half is an ex-Pro Mod motor while the blower and hat are off one of John’s old funny cars. The combo is probably capable of somewhere between 2200 and 2500hp according to John, but obviously they won’t be pushing it that hard. Even with the world’s softest tune in it, this thing will be making well over 1000hp! 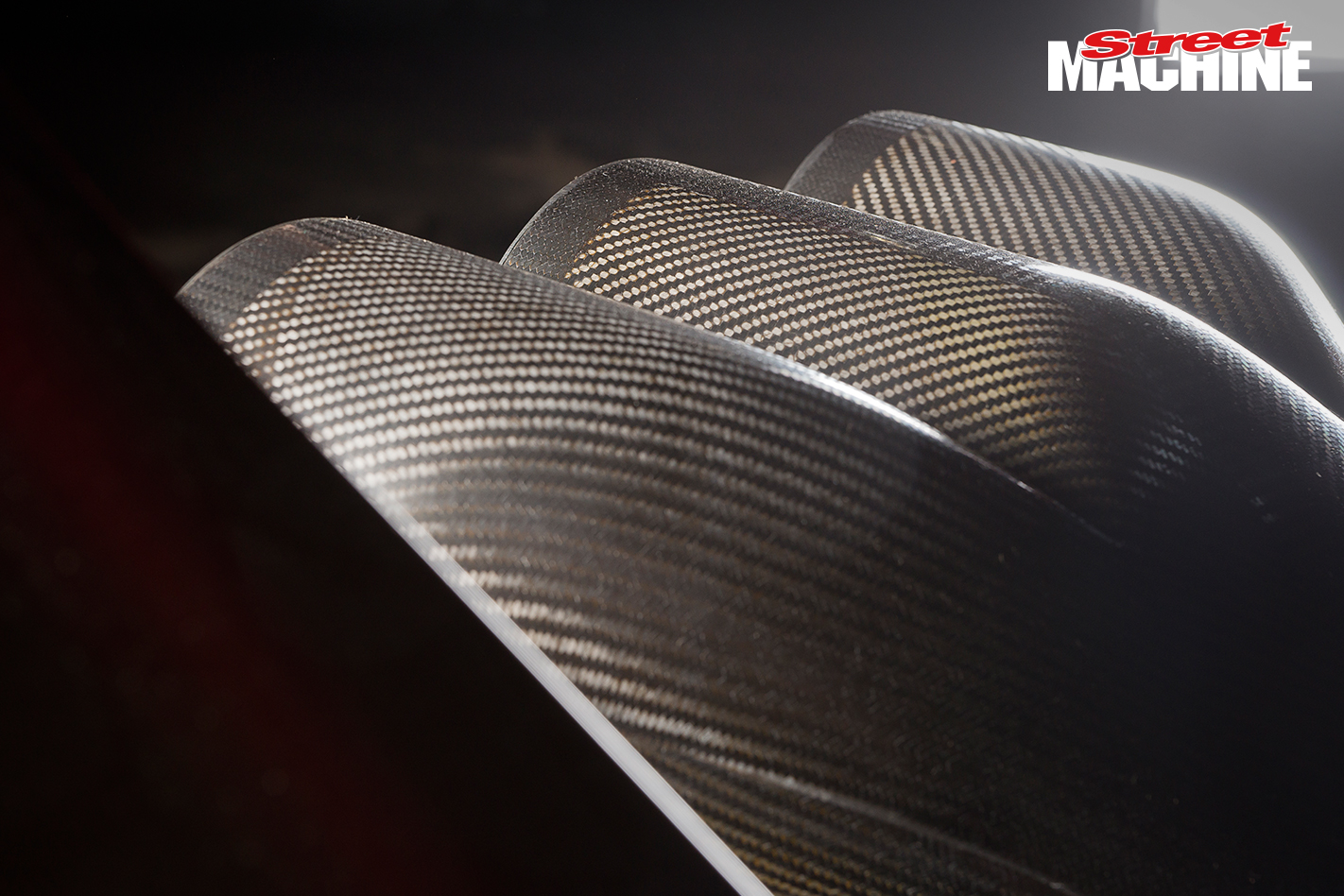 Based around an aluminium Ford Racing big-block, there was absolutely no stuffing around when it came time to order the parts. Of course, all of the rotating stuff is forged and starts off with a Bryant stroker crank, Brooks ally rods and a set of pistons that set the static compression at 12.5:1. Yes, you read that right. 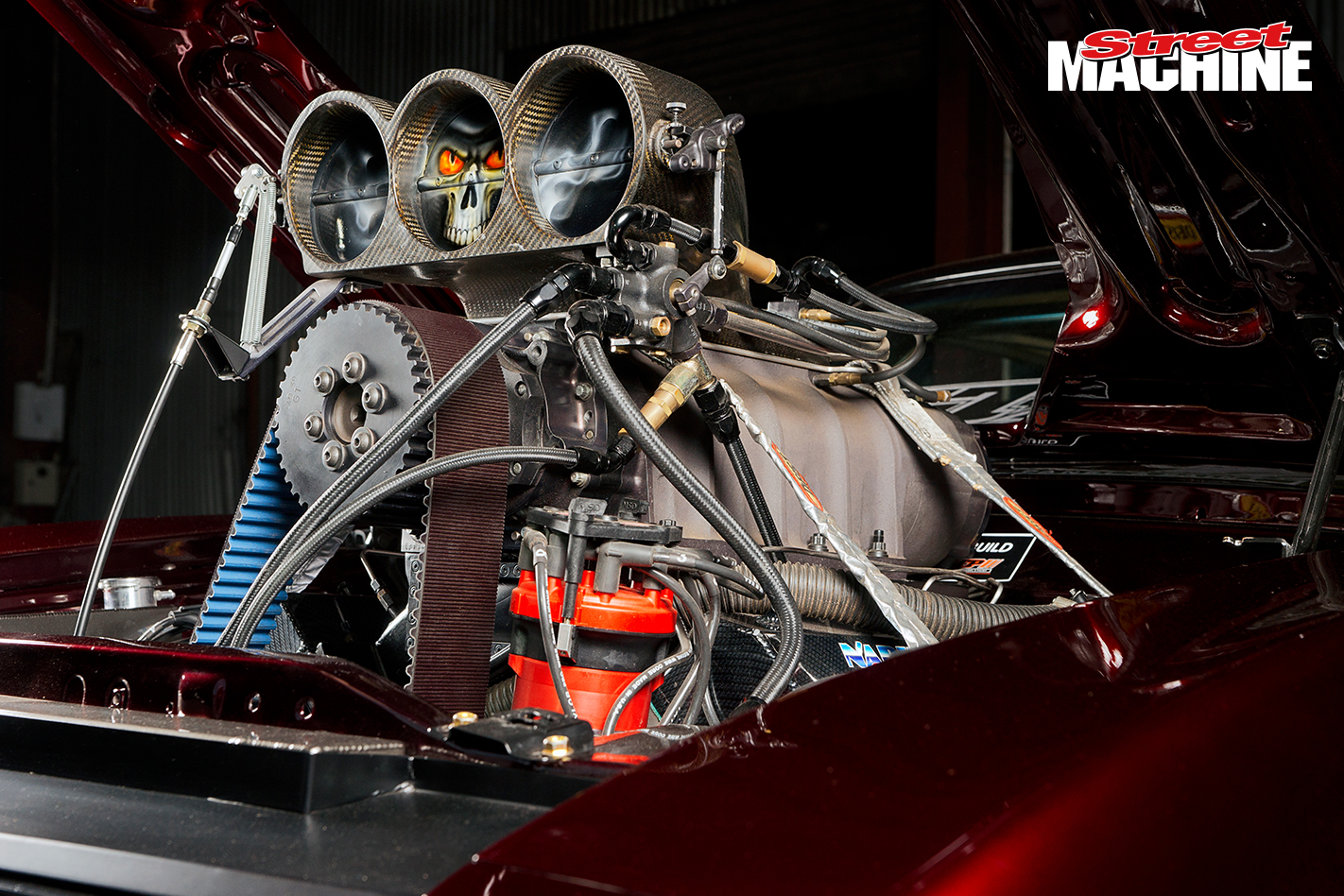 The EPD Hemi heads are filled with titanium valves and the 16/71 Kobelco blower and carbonfibre hat get busy pouring in the methanol, and no doubt this motor will be sucking it down big time. Not to worry though, there’s a custom-built 150-litre fuel cell in the boot. 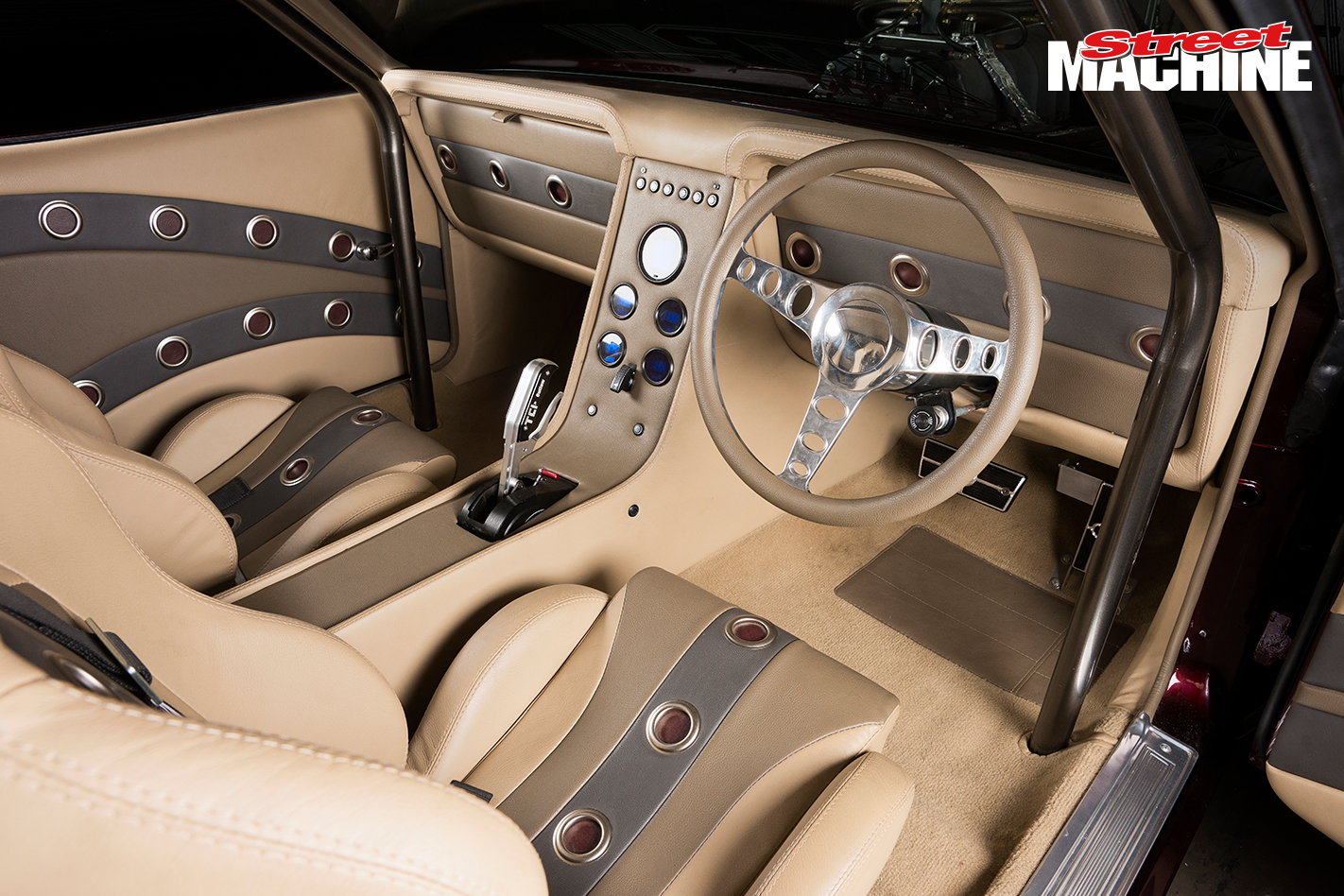 Finding a gearbox that was capable of holding the horsepower – and abuse – that will be thrown at it was no easy task. JW Performance Transmissions in the US supplied one of their full race-spec Powerglides. These things are bombproof and are capable of withstanding 3000hp. JW also supplied the adapter and converter, so the entire driveline has been built with ultimate strength and reliability in mind. No, it’s not cheap, but neither is blowing up your gearbox every time you hit the burnout pad. 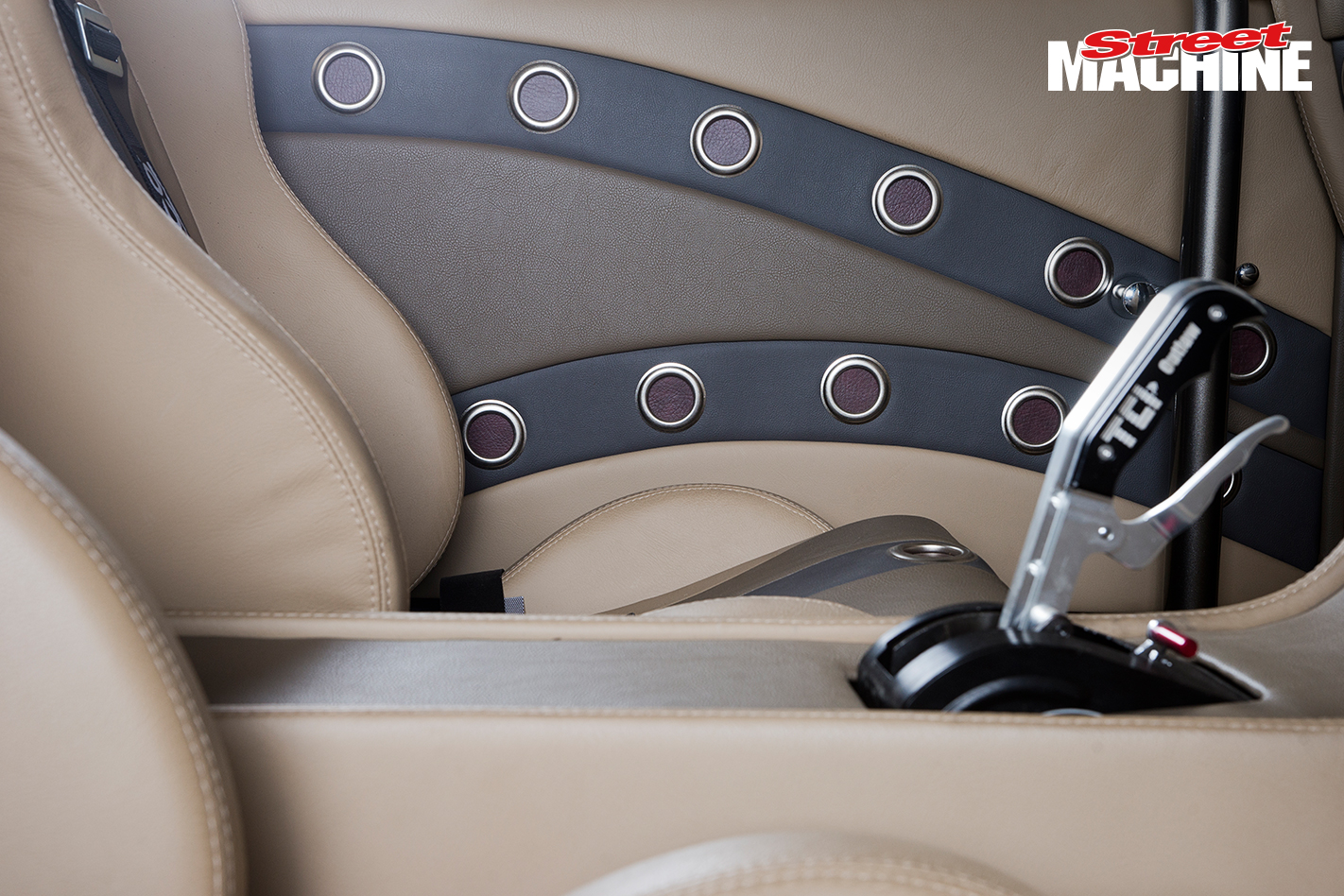 The easy option with this car would have been to slot all that killer running gear into the already tubbed, painted and leather-trimmed body. But there was a small problem – the colour. It wasn’t a favourite of Kynan’s and it didn’t seem to grow on him with time, so it was off to ITP Panel & Paint for a colour change. It wasn’t long before Owen Webb got involved and Brandywine Kandy over a black base was selected as the new hue. Charlie Takacs was the man wearing out his fingerprints as he spent some 300 hours doing the bodywork and painting, and although it was pretty good to start with, there were still a few extra touches added to clean it up. 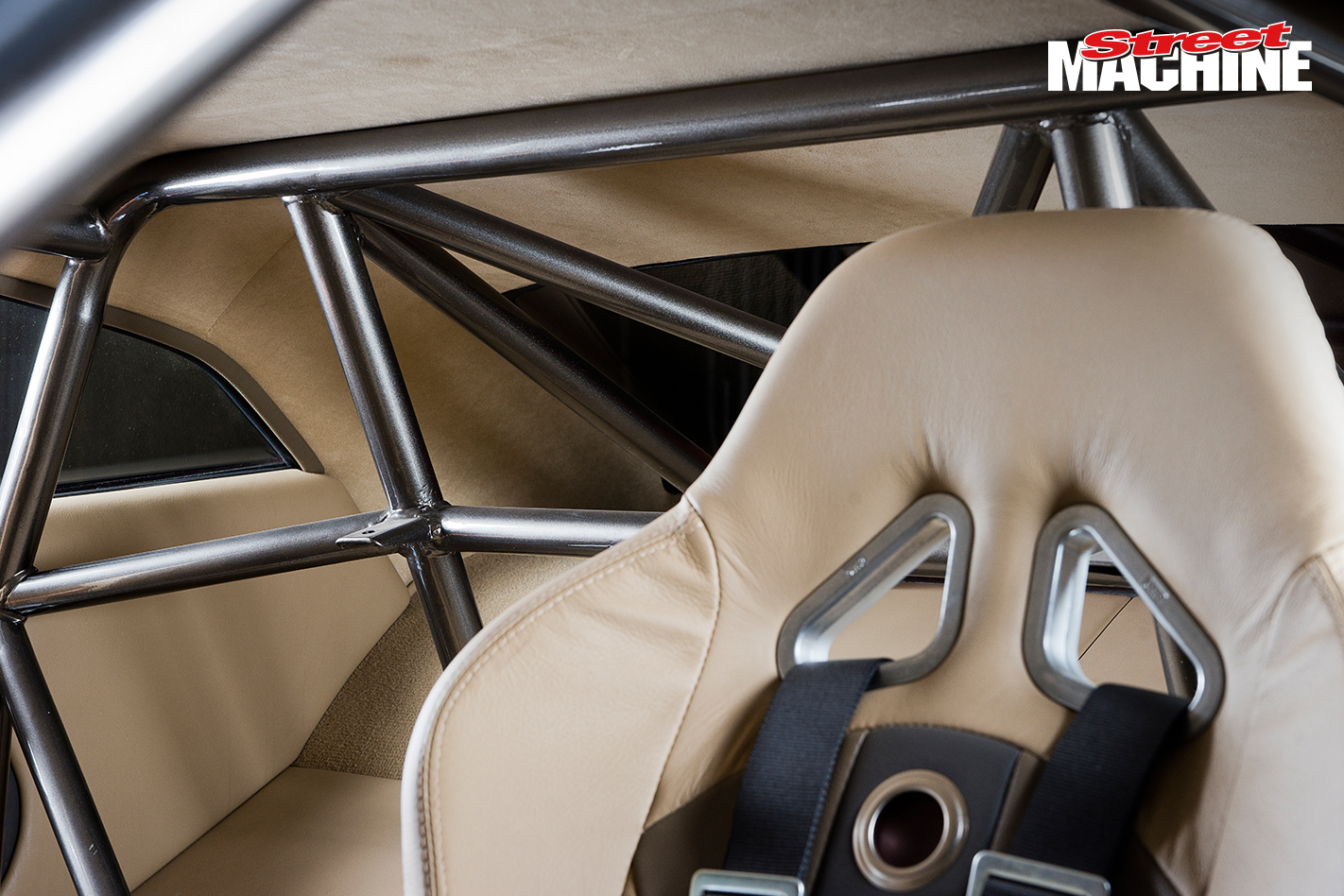 Bumper bolts were smoothed off and a few bars were removed out of the rollcage to make it a little more user-friendly. The engine bay had any unnecessary holes filled and custom boot hinges were fabricated to work around the existing tubs, as the car had previously had a lift-off boot. 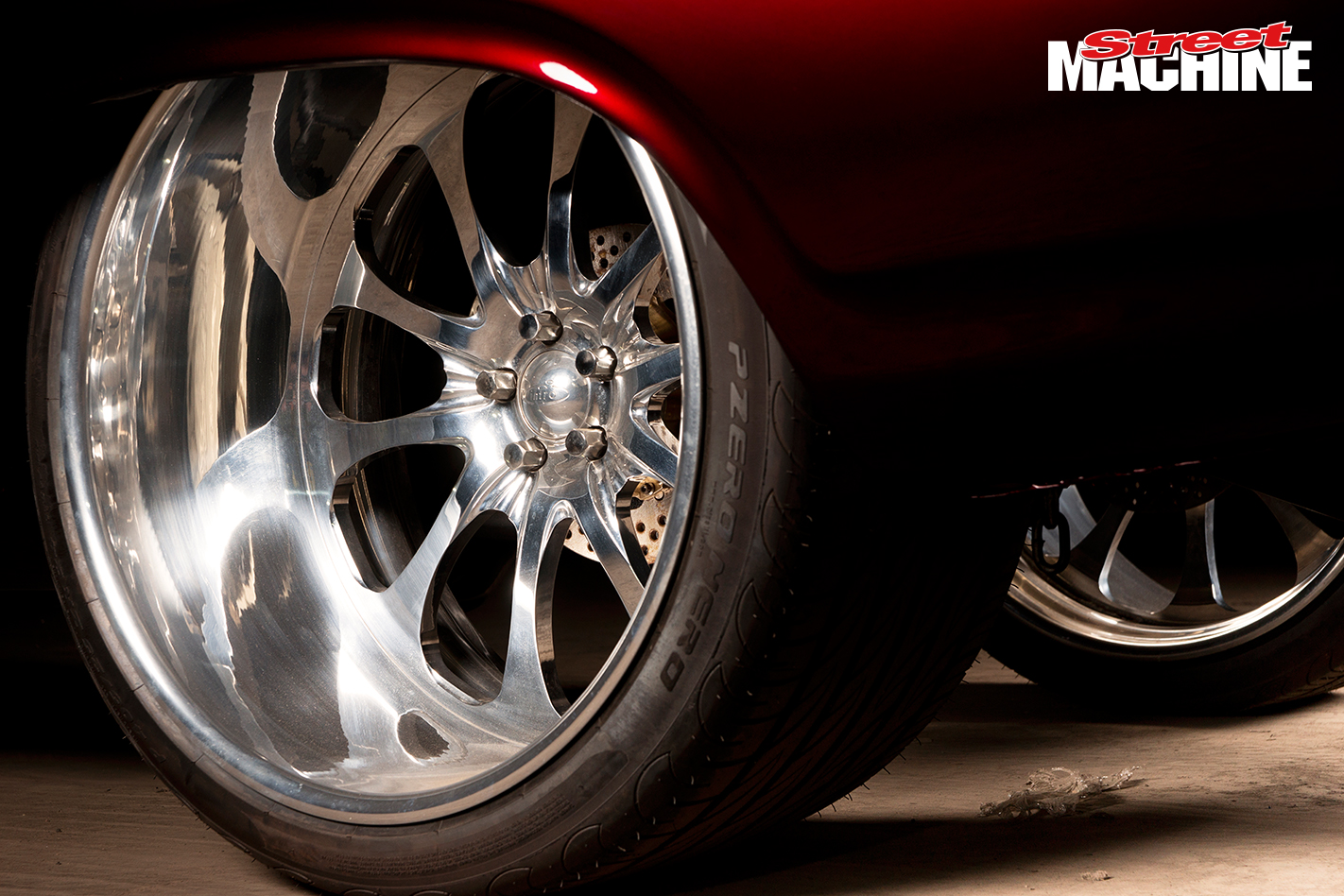 There is nothing left of the original interior either; Kynan took the car down to Southside Motor Trimmers and let them loose. The result is a classy leather-lined cabin with a filled dash and custom centre console that now houses the Dakota Digital gauges. A TCI Outlaw shifter contrasts starkly with the luxurious Billet Specialties Outlaw steering wheel, yet somehow, it all seems to work. And those holes in the seats? “John reckons they’re to catch all the poo once I put my foot down for the first time,” Kynan jokes. 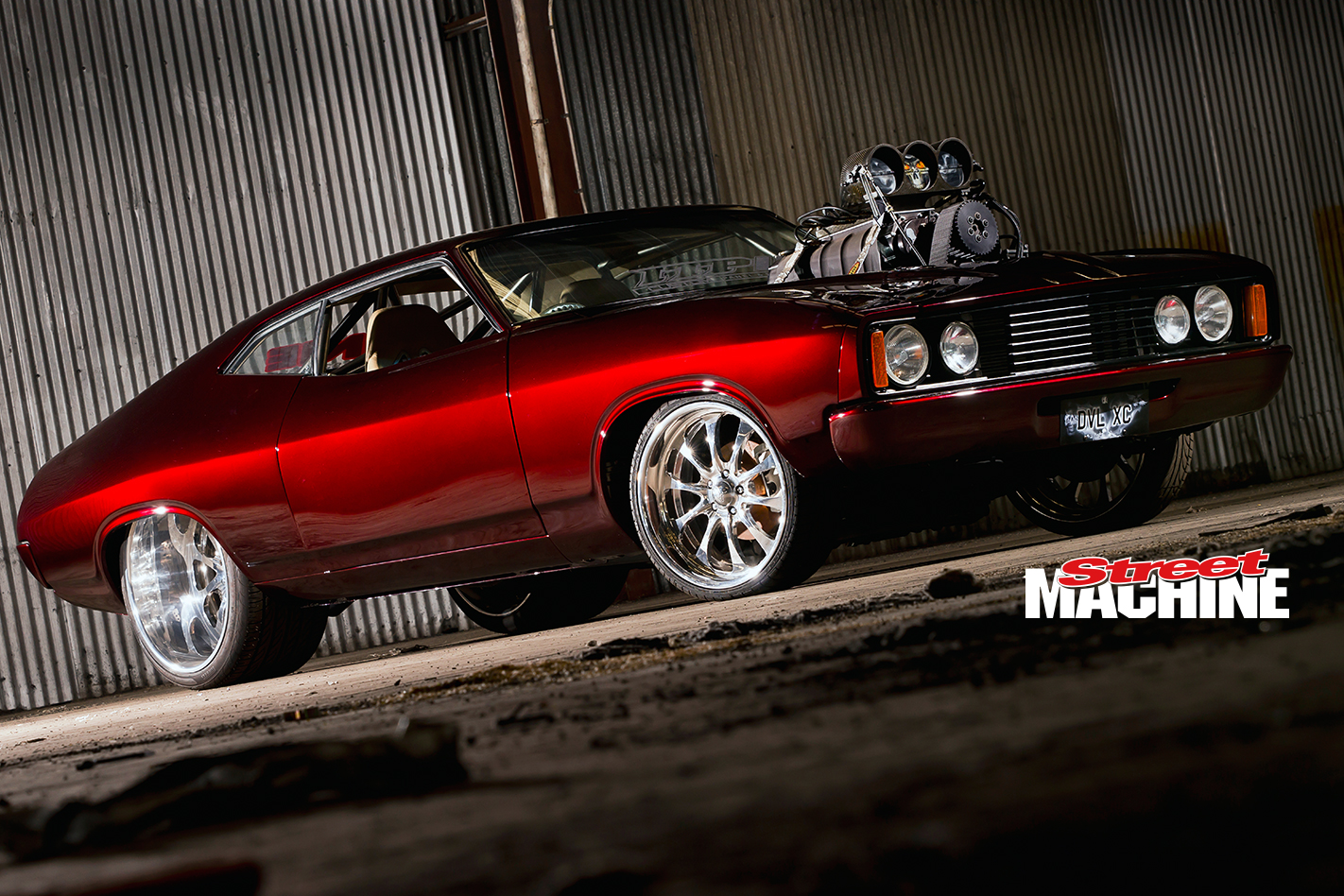 Just about everything on this car is in-yer-face and the wheels are no exception. They are about as big as you can get – most people would be happy to run a 20x8.5 rim on the back of their car, but that’s what is holding the front up! Out back are ridiculously huge 24x17s with the widest rubber Pirelli make, a 405/25 PZero Nero. The good news is, they fit in the tubs no worries, because although they are gigantic, the overall diameter is around 32 inches, which is about the same as a 16-inch-wide Mickey Thompson Sportsman Pro.

It’s pretty insane that people are building burnout cars to pretty much elite show car levels, but we love it. The more people push the envelope, the more rad rides like this we're going to see and that can only be a good thing.