TV SHOWS make it look like you can build an awesome show car in just under a week but anyone who’s been there knows different. So how long does it take to build a car that’s well-crafted enough to win Top Pro Modified and a place in the Elite Top 10 at Summernats while also packing the conceptual punch to win both People’s Choice and PPG Supreme? Would you believe just nine months? 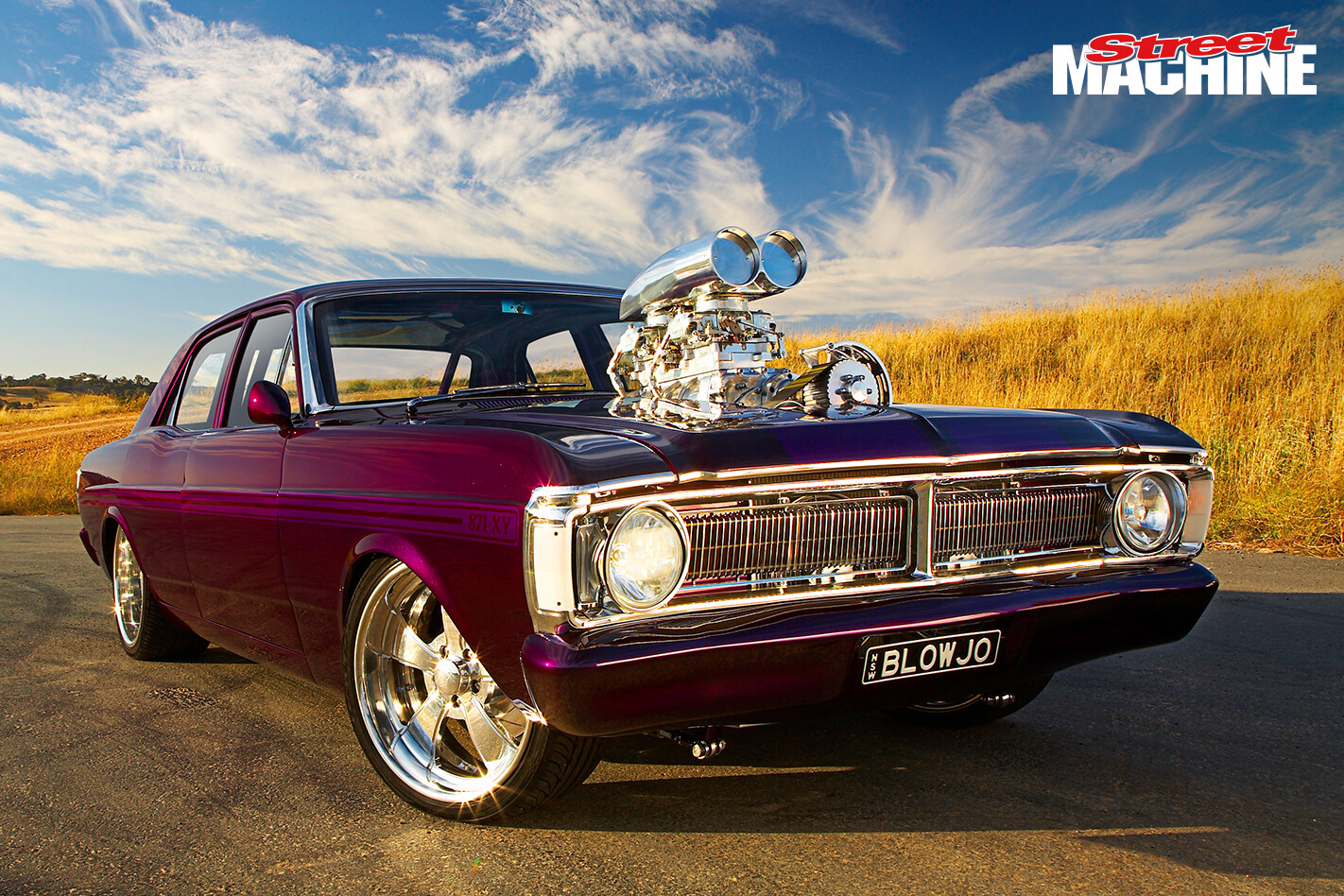 Canberra’s Joe Lore did exactly that but even he finds it hard to believe. “We were just going to do a tough street car to start with,” laughs Joe. “My dad had an XY when I was a kid and it was a childhood dream of mine to build one. Nine months out from Summernats 21, the car was a shell with a rollcage and nothing more. Something snapped inside my brain and I decided it had to be ready for the 21st and that I might has well have a go at Elite while I was at it.” That translated into a no-holds-barred build. Joe and his crew spent every night after work on the XY, with the build completed on New Year’s Eve.

The basic specs are impressive — a stomping 383ci Clevo with 8/71 blower, deep-dish Intro rims, a flat floor, an amazing custom interior and super-smooth undercarriage — topped off with mind-blowing paint and graphics on, in and under the car.

It is the kind of car many builders could easily spend half a decade perfecting. “That wasn’t going to happen to me,” he says. “With a car like this it’s hard to know when to stop, so having a firm deadline kept it under control. It was built for the 21st Summernats and it was going to be there, finished or not. There are certainly things I know could be better but you can’t let it take over your life,” he says. “At one point, one of my daughters asked if Daddy was going to work on that silly car again, which is hard to hear, so I was pretty keen to finish the build.” Like most of us, Joe couldn’t abandon his day job to work on his car, so the whole project was done at night, in his workshop. “I employed a small team of guys to work on the car with me. I originally got Deno and Mud involved just to do the panel-beating but they ended up staying with me until the whole thing was done. They treated it as one of their own projects,” Joe says. 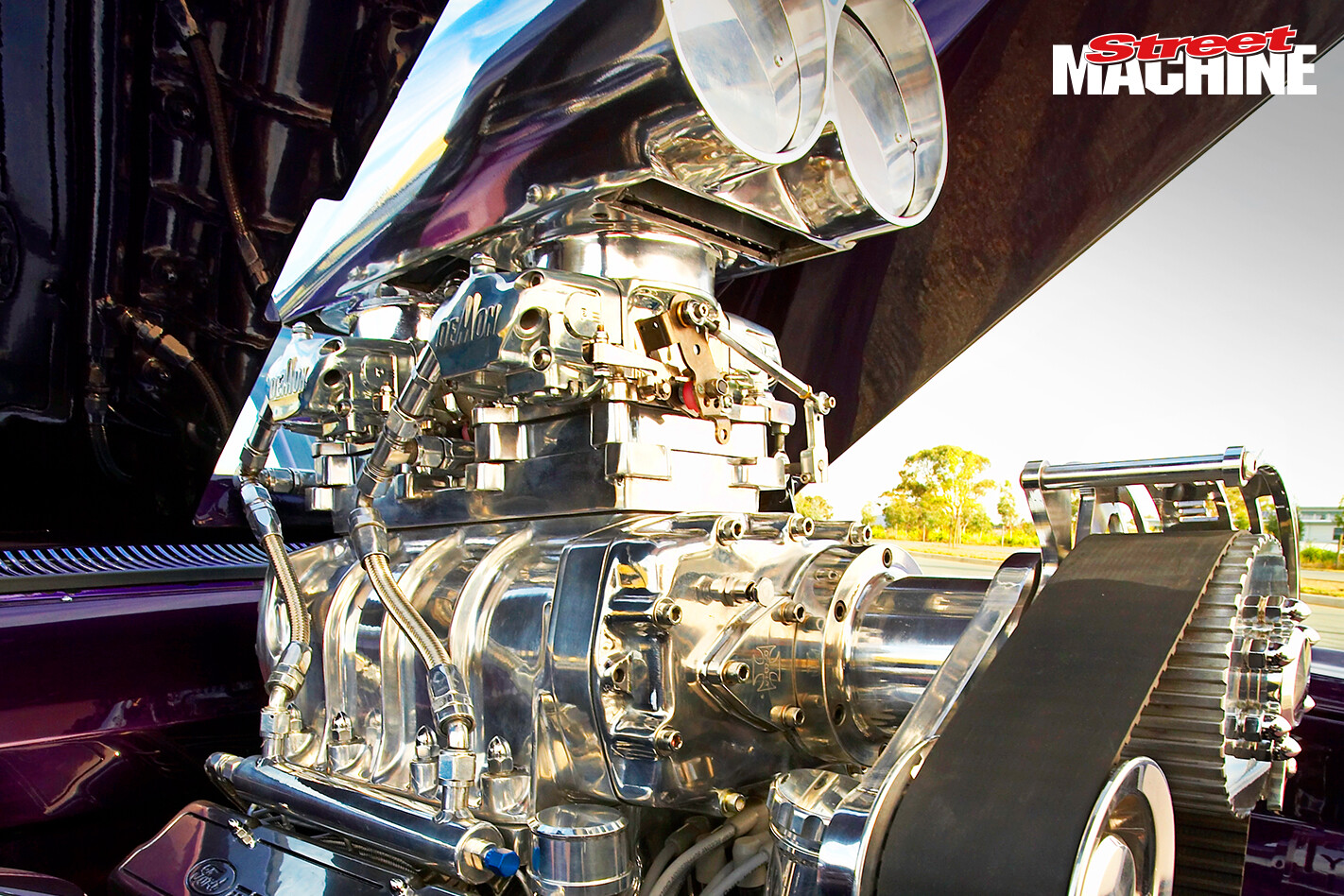 He had the basic look for the car mapped out in his head, aiming for a ‘GT on steroids’ feel. “I was very much inspired by Gary Myers’s Silver Bullet. The paint inside that car is unbelievable. It is the toughest Mustang I’ve ever seen and I thought if Gary could do that to a ’Stang, I could do the same to a Falcon.” For Joe, that meant building an XY “so tough that it would scare people”, yet it still pays homage to the classic XY GT. “That’s why we went for the GT stripes and XY 8/71 graphics,” Joe says. “That way we got the best of the GT style without it looking like a clone. A few times we’d get away from the GT thing and we’d have to pull it back. We tried a flat dash for example but it looked ugly and you couldn’t tell you were sitting in an XY, so we modified the original instead.” 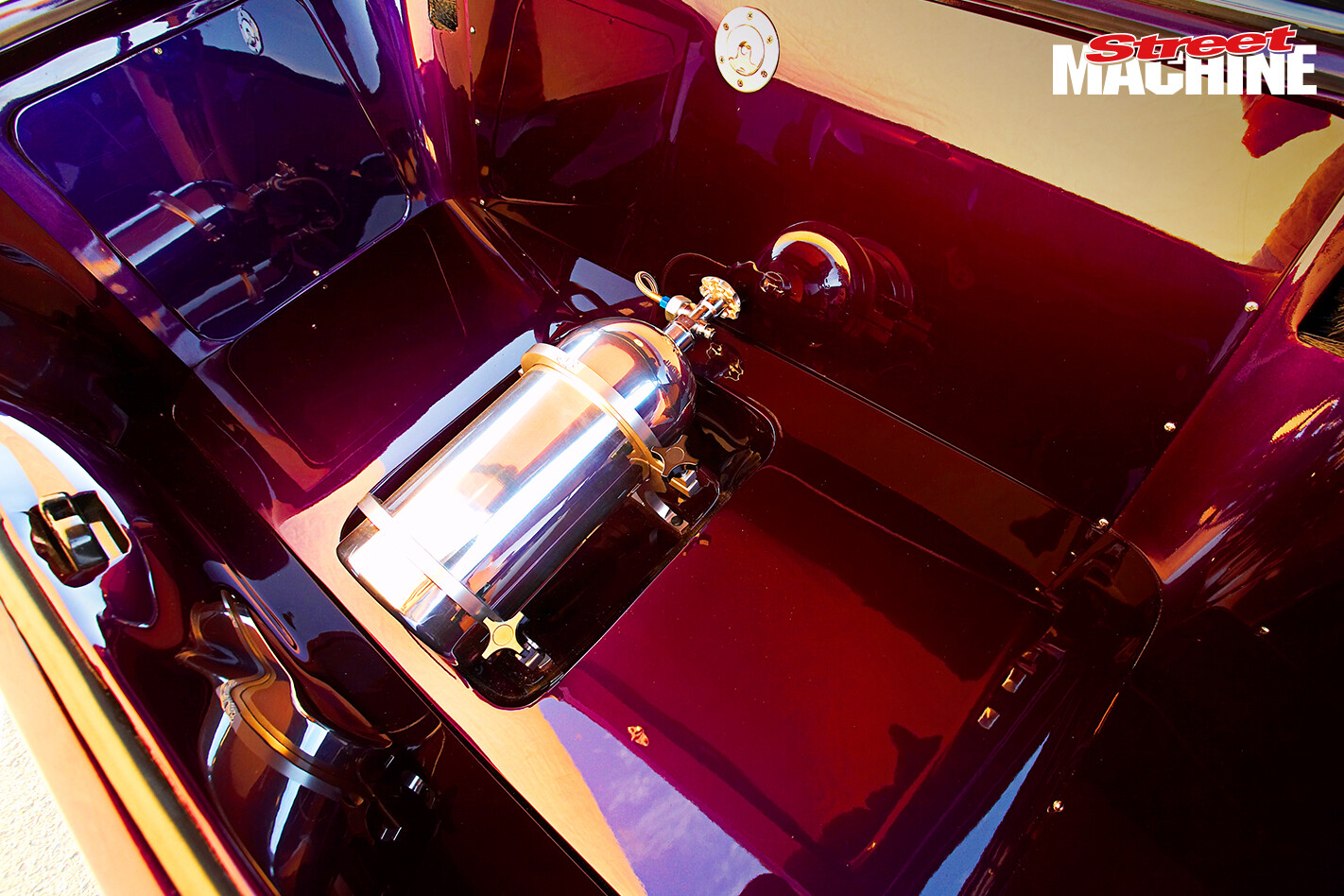 Even with skilled helpers, nothing would have happened without some fairly ruthless co-ordination. “I work in the building industry and if you don’t do your part on time, you hold up the whole project and get hit with penalties. I just applied the same thinking to the XY and made sure that everyone got their piece of the puzzle done according to the timetable. We basically gave ourselves jobs to do every night and didn’t go home until they were done.” 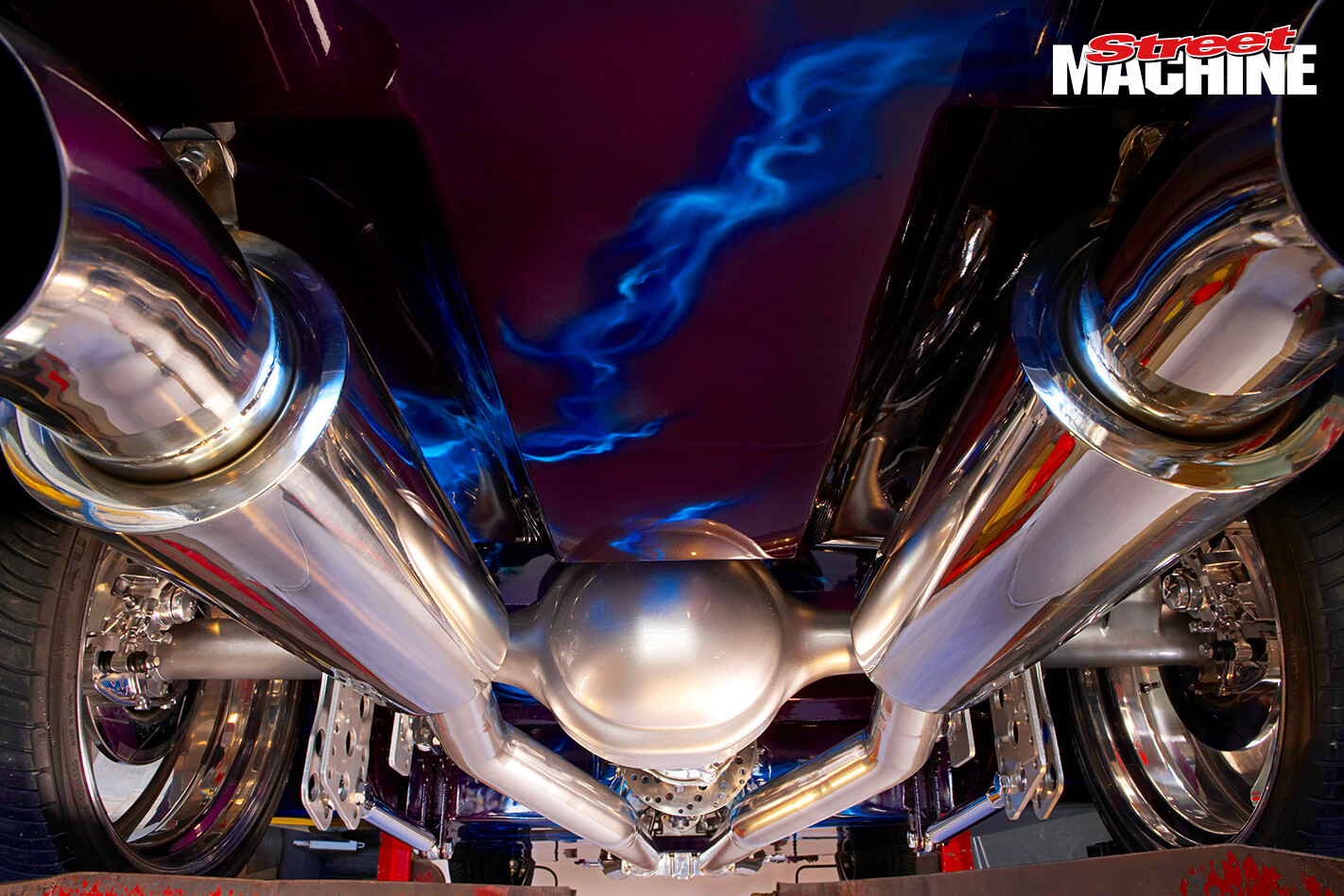 Farmed-out jobs included the four-link rear by the Diff Doctor, the bonnet by Mick’s Metalcraft, trimming by Gav and the engine by Peter Pulford and Ben Gatt. Everything else was done by Joe and his crew, with Joe learning some new skills along the way. “I’d never picked up a MIG before I started on this car but we use arc and oxy for work. We pretty much had two MIGs running on this car full time.” 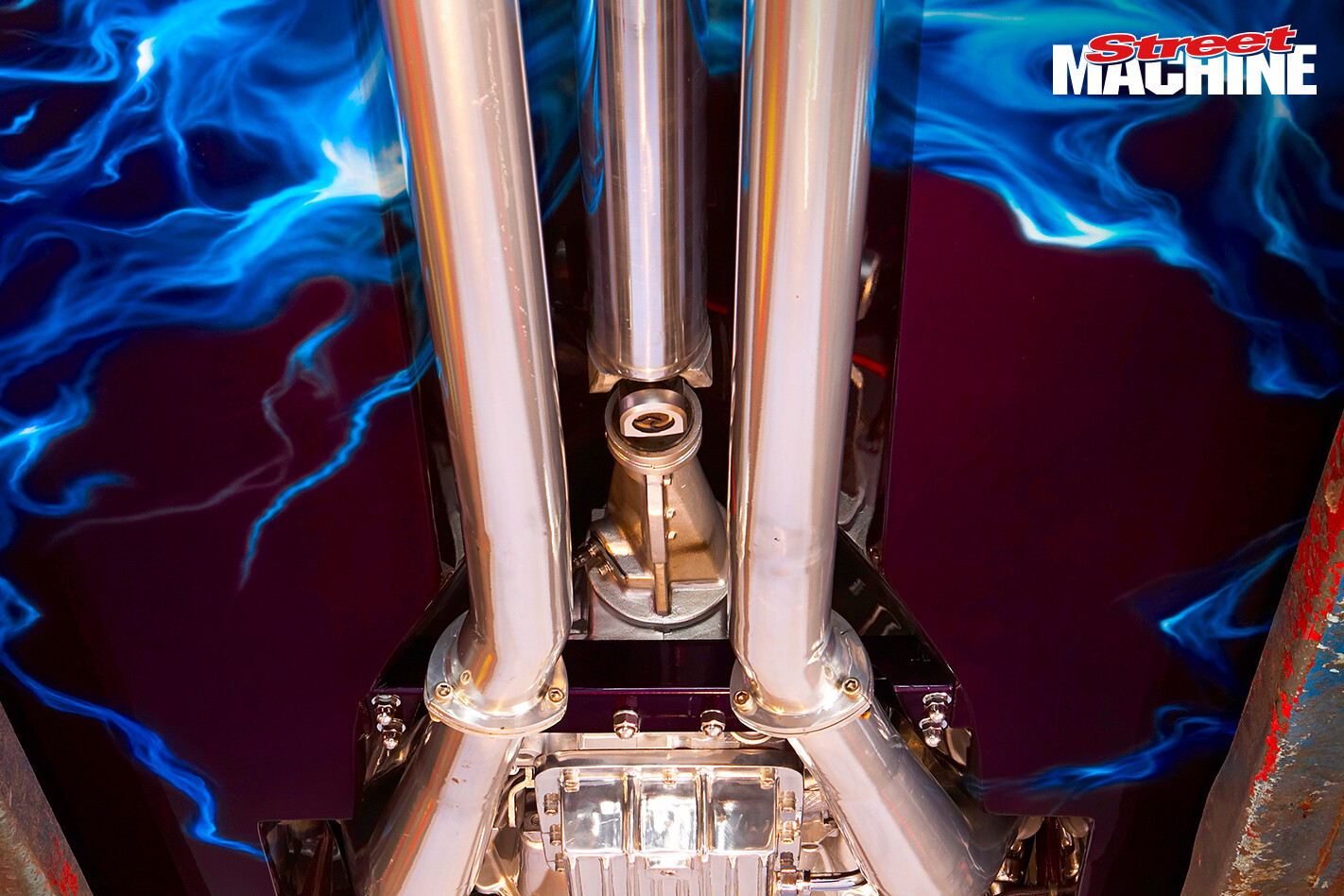 Body mods are extensive and sometimes subtle, with the bumpers modified for smoothness, the door handles filled and the boot mated to the beaver panel. There is a three-layer flat floor, mini-tubs, front inner guards, custom dash and console, new parcel shelf and super-smooth hood-lining.The whole lot was painted by Andrew Ash in a wild HOK Burple duco, with the rollcage and stripes done in a lighter shade of purple. 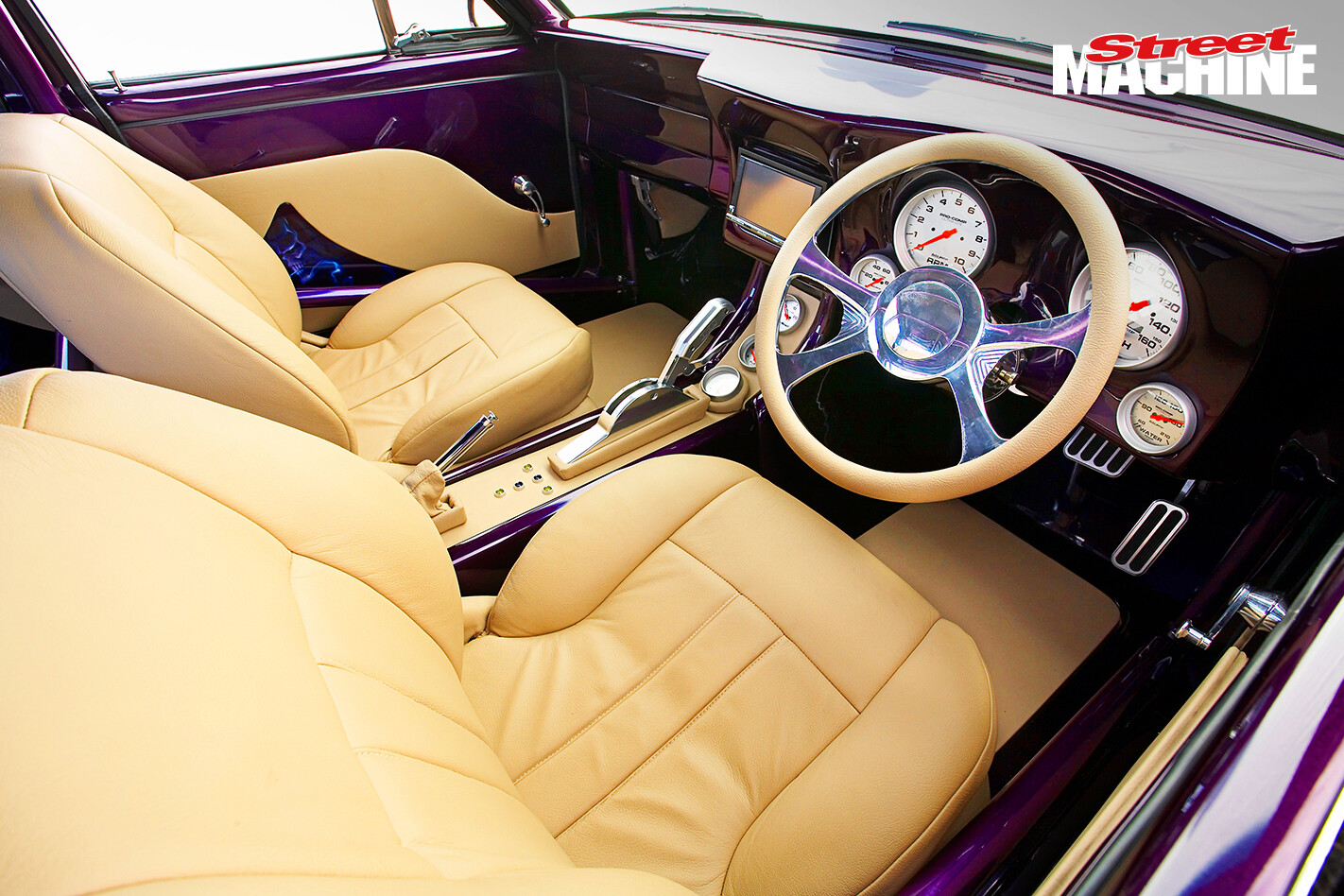 The interior is a real work of art, with the custom dash, seats, parcel shelf, console and flat floor flowing seamlessly into each other, around the rollcage. Making it all fit (after the car was painted!) was a mind-bending process. “To remove the dash, you have to follow a sequence — the back seat comes out first, then the centre console, then the mid console, then the dash!” he says. “It has to be like that to make it look seamless but we can access everything you might want to get at through the instrument cluster and the centre console.” 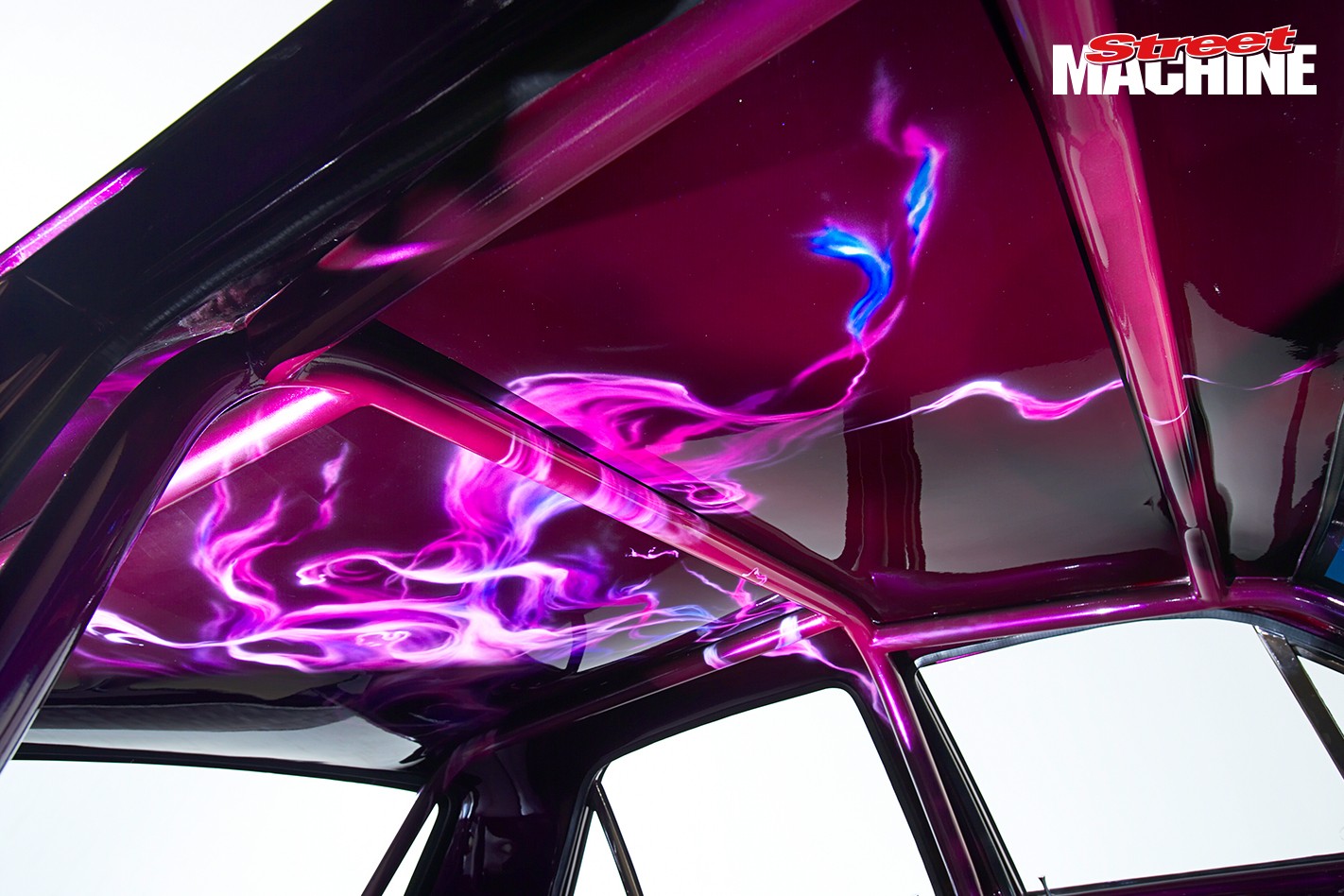 The fibreglass hood-lining was another nightmare job, performed with the car upside-down on a rotisserie. “Basically we laid the fibreglass blanket down over the roof, stretched it out and held it in with pinchmold. This is under the rollcage, so we used rollbar foam to keep the blanket away from the ’cage, poured the resin over it and then scratched away the padding. We then put down layers of glass sheet and rubbed it back and re-glassed it ’til were happy with the shape.” Underneath, the car received an equal amount of attention. “Every piece that follows the rails has had another piece stitched over it to try and get the smooth flow,” says Joe. “We couldn’t have a place where a component suddenly starts or stops.” 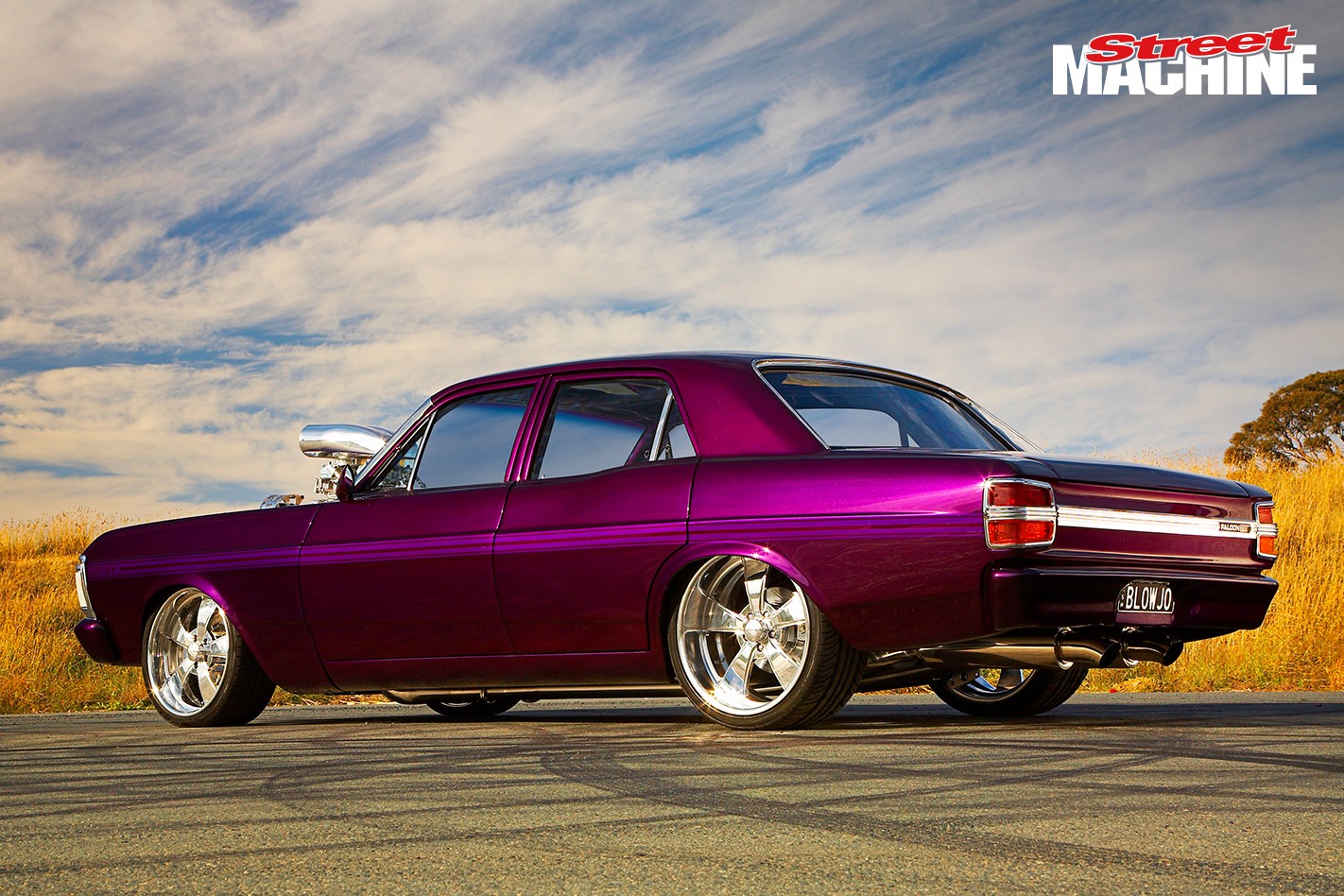 Despite the undercarriage detail and cop-bait exterior, this is one show winner that’s going to be used. “I’m going to drive this car into MotorEx and drive it out,” Joe says. “And once the show duties are over, I’ll take it to WSID. I’ve always intended to race it; that’s why it has the rollcage.” The XY will also see some cruise duty too: “We did so much work underneath it is a shame to drive it, but that is what I built it for — take the kids for a Sunday drive, go for a coffee. At the end of the day it is just a car.”