Wanna get noticed? Go crazy on a late-model car then add some old-school muscle

Wanna get noticed? Go crazy on a late-model car then add some old-school muscle

YOU WOULD think it’d be easy. Jump on the phone to the US late one night, order some parts from a couple of speed shops, have them shipped Down Under, slip ’em under the bonnet and voila! Blown donk. After all, the Yanks have been pumpin’ thump into just about anything with spark plugs for eons and America is the home of V8 performance, isn’t it? 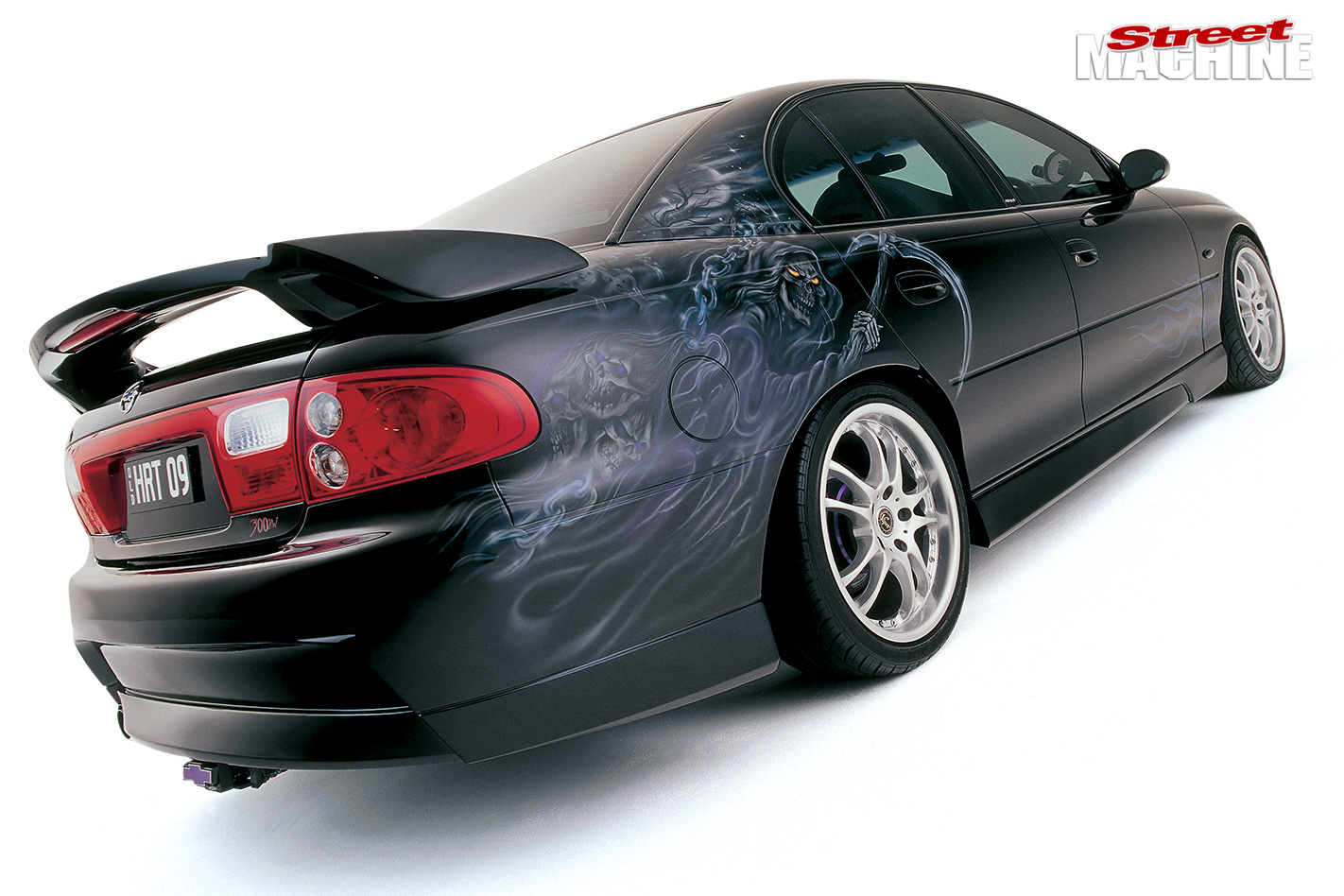 “I rang America,” says Anthony Balsamo, who wanted a 6/71 blower kit to suit an LS1 V8, “and got the run-around from those guys! I couldn’t believe it!”

Sure, Anthony could have fitted an under-bonnet blower but that wasn’t the point. “Everyone’s got the Vortechs and the twin-screw blowers but they just didn’t appeal to me. They might be road-friendly, but they don’t have the visual grunt in them. I built this to be a tough street machine, something wild to blow people away!”

He’s certainly done that. Fitting a 6/71 to a near-new Commodore may not be the easiest, cheapest or most sensible way to go but geez, what a recipe for fun!

With his mail-order plans wrecked, Anthony called anyone and everyone in Australia.

“I rang so many people and not one person would touch the job. They just kept blowing me off and said things like, ‘Nah, the LS1 won’t take it,’ and, ‘Nah, we’re not interested in doing it’.” 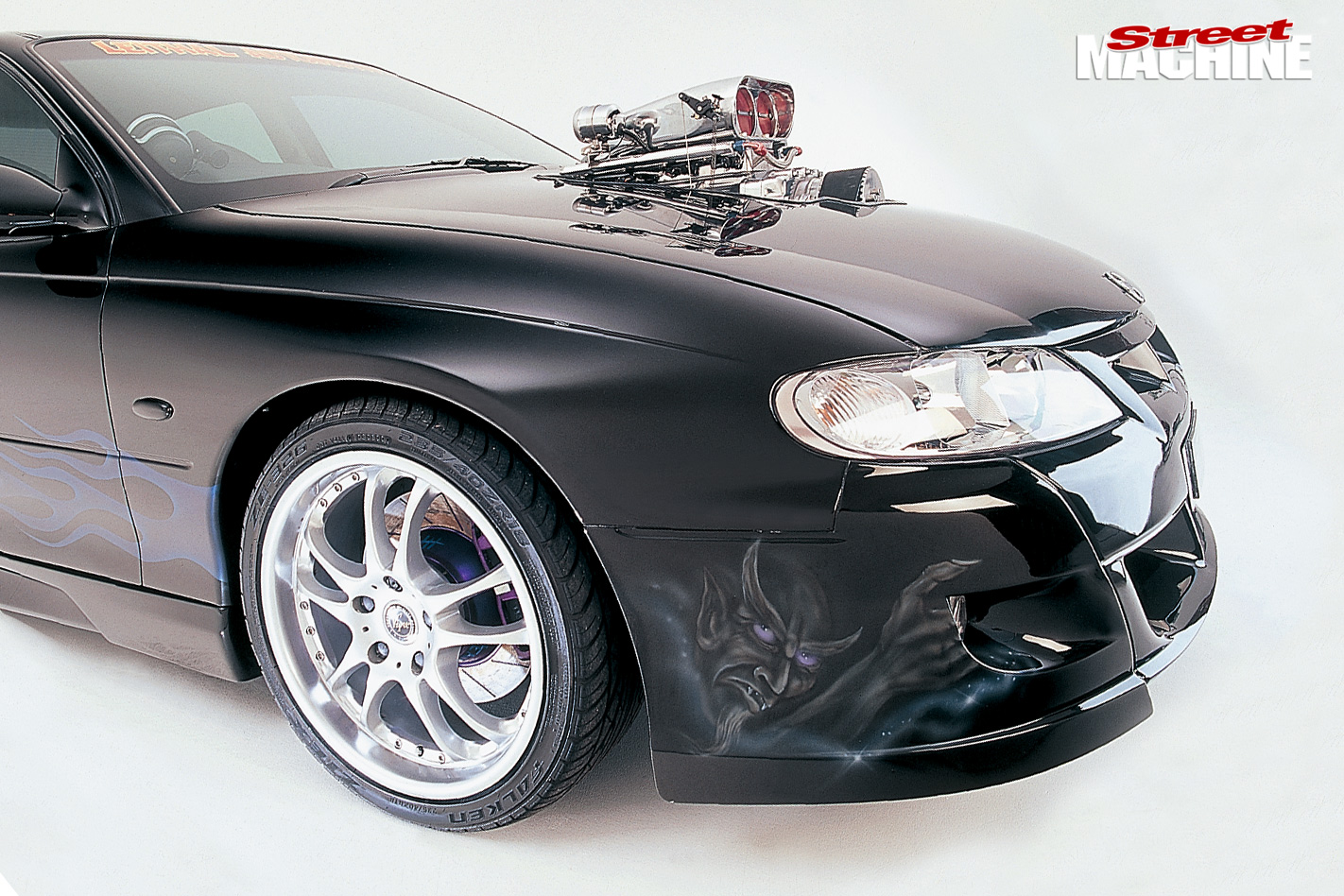 “He’s a young guy but his brain is unbelievable,” says Anthony. “I told him what I wanted to do.” And rather than dance around the edges or make excuses, Leith got into it.

Of course, the marriage of blower to block wasn’t without its share of problems. “I got to the stage when I thought I’d had enough,” admits Anthony. “That was only about three weeks ago! I was gonna pull the pin, sell the blower and put it back to standard.

“It’d been in the workshop three months and we simply couldn’t find anything. Everything had to be made – the pulleys, injector rails. Bits and pieces held us back.”

Leigh relates some of the drama: “We got the manifold as an unfinished prototype. It was no more than a base plate but the design was flawed, as there was no provision for the fuel injectors and it fouled on things like oil-pressure switches and the like. I had to just about build it from scratch but now that I’ve done one, I can do more.” 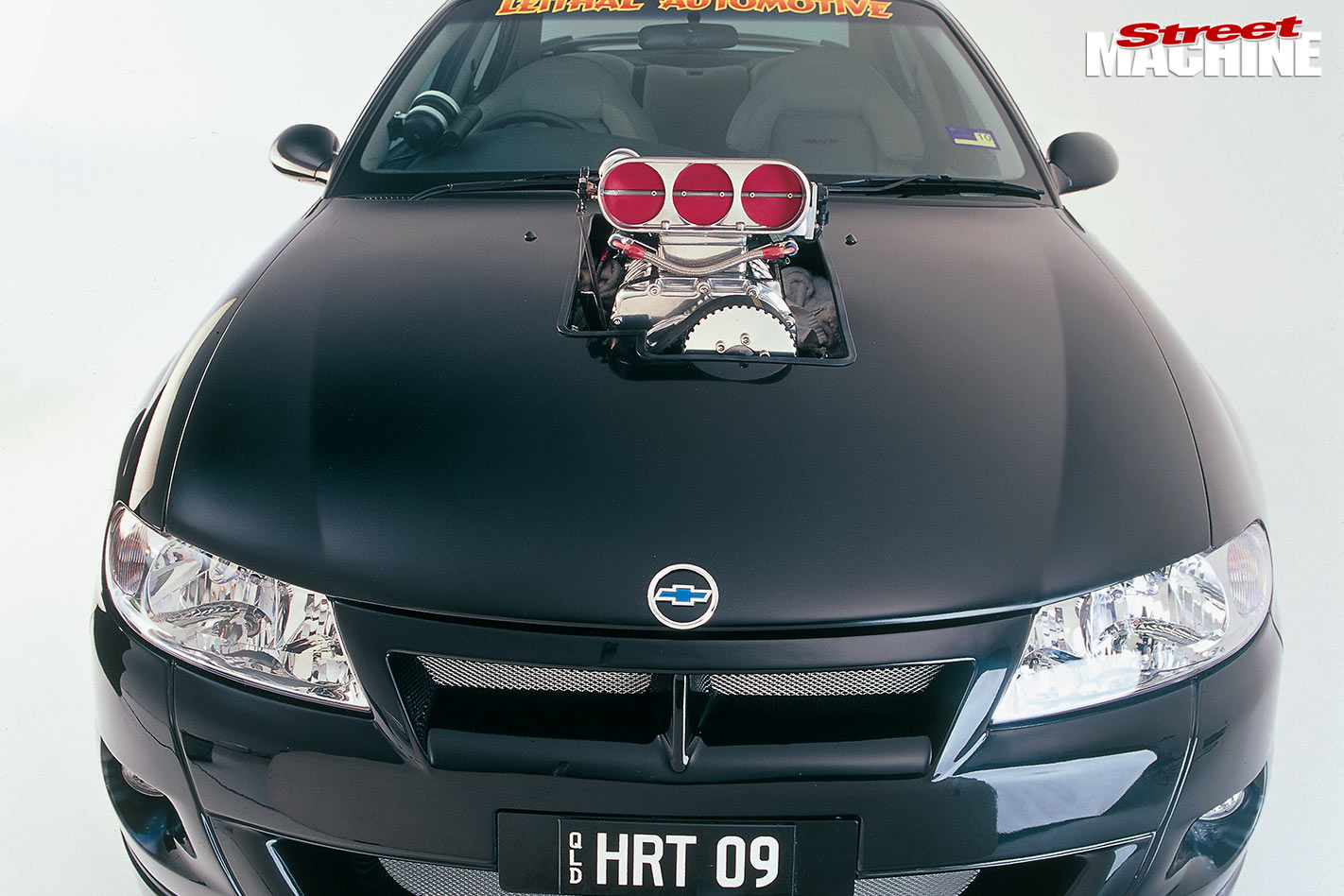 Their persistence paid off. “I’m just rapt with it,” adds Anthony. “I reckon it looks bloody tough with the pump on it.”

The management system was the work of EFI tuners ChipTorque. ChipTorque’s Lachlan Riddel modified the Holden management system to run the supercharged engine, which shows just what an adaptable system it can be. It’s not all sorted yet (see ‘Feeding the Fire’, below) but Lachlan is confident of taking the 6psi-blown LS1 to its potential of around 450kW with a few more hardware and software tweaks.

At present, the exhaust is a stainless twin 2½in system from Hi-Tech Mufflers in Southport but Anthony reckons it’ll need a 3in dual soon. There are engine-bay-mounted tanks for coolant and power-steering fluid built by Henwood Engineering. The over-radiator cold air intake is now redundant but adds a splash of colour to the engine bay.

“I took it up the street and nearly shit myself. It’s so touchy at the moment. I took it out on Sunday and it just went side-on. Laid rubber for 100 metres. I’ve never driven something with so much force straight away! I wasn’t really ready for it. 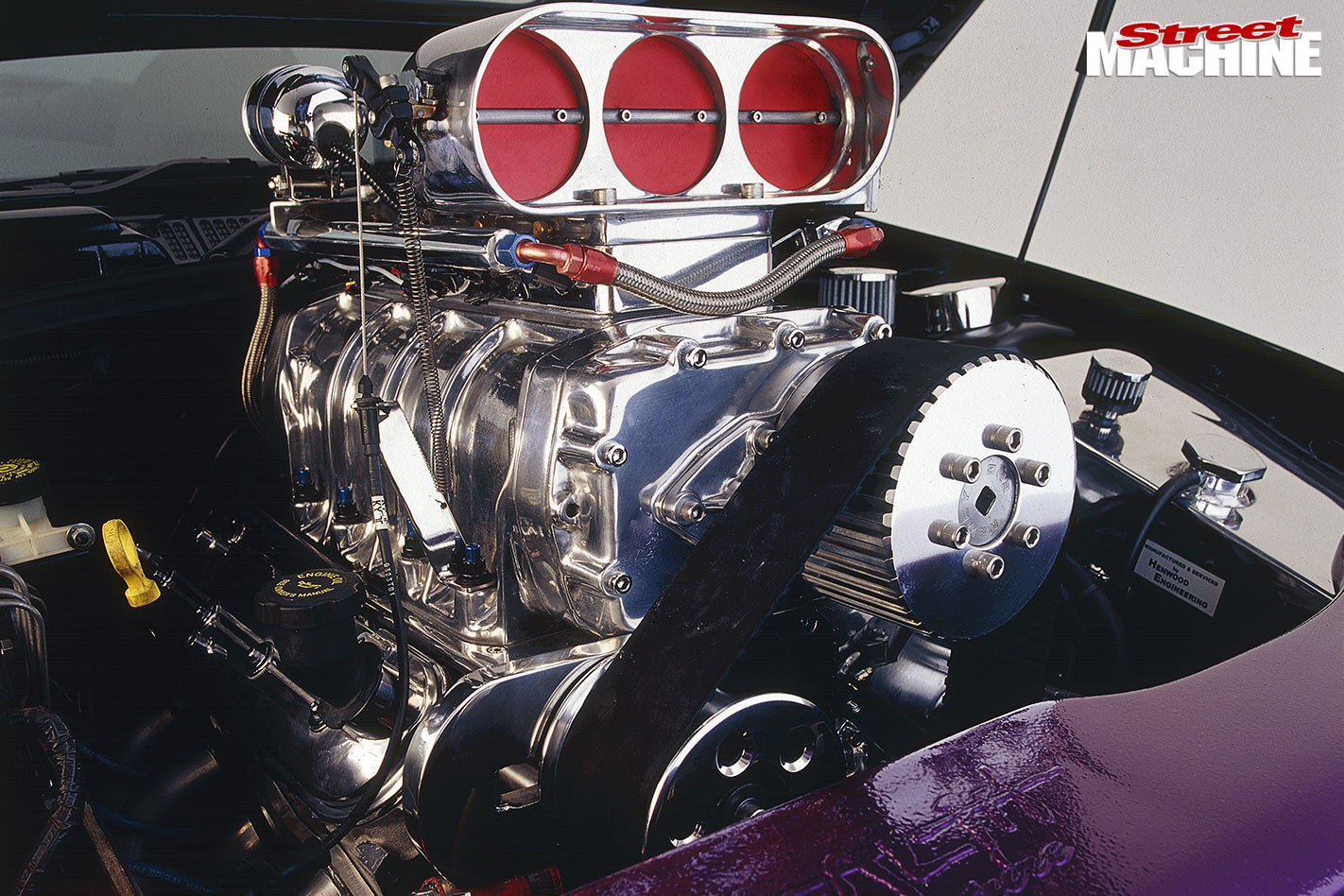 “I was talking to Gary Myers about things,” continues Anthony. “He told me, ‘Oh, mate, you don’t realise the sheer force of the blower. It’s just constant drive and constant power. Sheer grunt. There’s no waiting – it’s just straight power, straight away.’ I have to agree!”

Of course, there’s more to this Commodore than an engine. The car began life as a VTII Executive and came into Anthony’s hands already modified as a Stealth Commodore. The Stealth high-performance range was built in a similar vein to HSV and CSV on the Gold Coast by Parker Performance but for a variety of reasons only a handful were made. The Stealth mods included engine hardware to lift power to around 300kW and sorted suspension.

“But it looked too standard,” says Anthony. “So I decided to get a VX ClubSport-style kit on it. That came from Josh Kennedy at Mint Condition. Of course, we needed to get the VX headlights on it as well.” 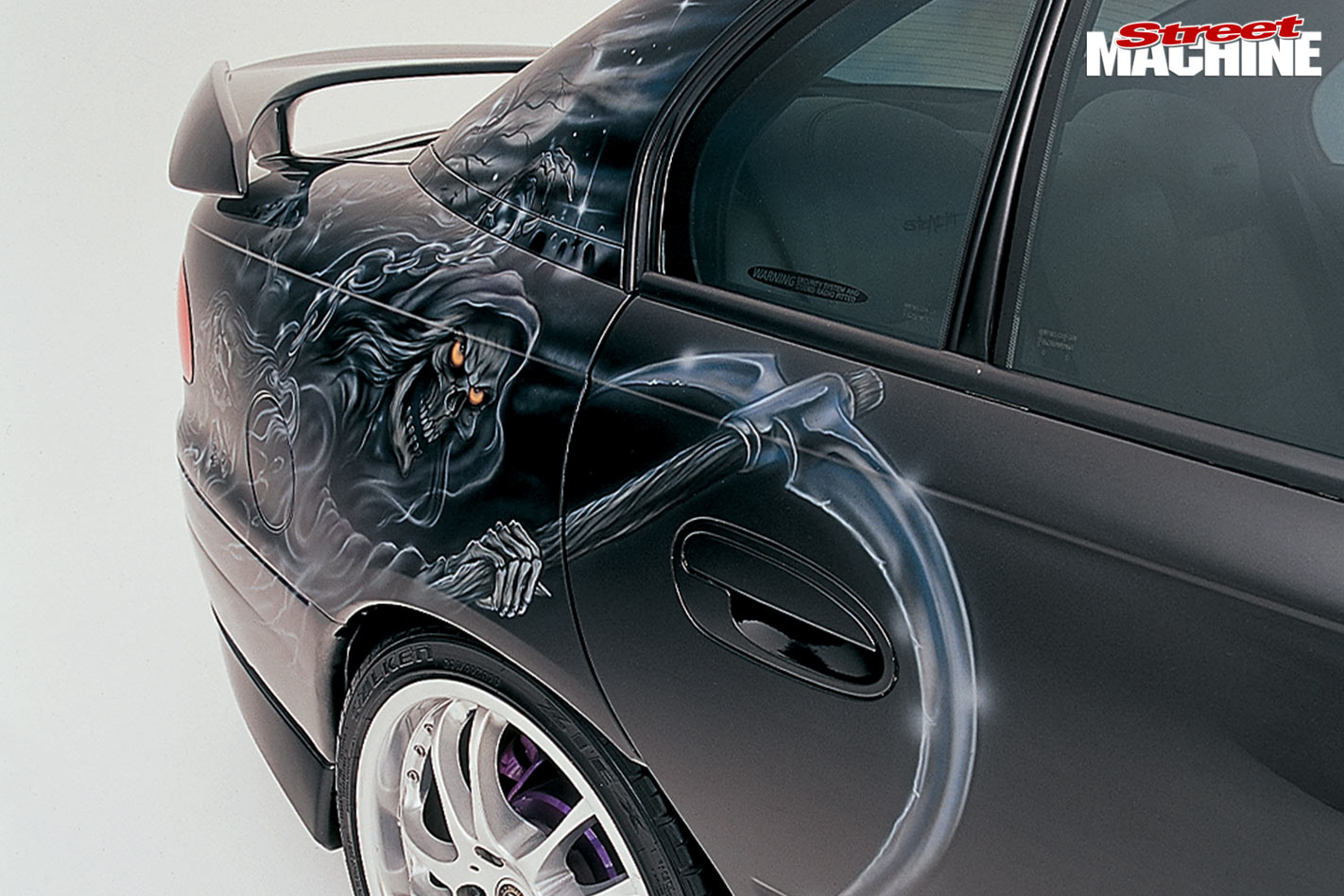 The body was looking handsome but the cabin wasn’t. “The interior didn’t look too crash hot, being standard Exec stuff,” says Anthony. “So I went to Precise Trimming and it’s come up beautiful in an oyster white.” More than a beef-wrapper retrim, Precise rebolstered the seats and added some HSV-style shoulder huggers. There are a few other niceties inside, such as a high-spec three-window instrument cluster with blue faces and an A-pillar-mounted tacho.

The murals are the work of well-regarded Brisbane artist Little Mick. “I like the look of murals, so I thought I’d get some. I’d seen Little Mick’s work, he can do anything. As well as doing murals, he’s a tattoo artist and builds hot rods. Everyone that comes up to it is blown away by the murals.”

The wheels are 18-inch Vipers and they’re mounted over upgraded brakes with 330mm-diameter front rotors. The suspension is a combination of Kings, Konis and Selbys. Other touches include Monaro tail-lights, Berlina boot garnish, black-tinted side flashers and Chev badges. But the car isn’t finished yet. 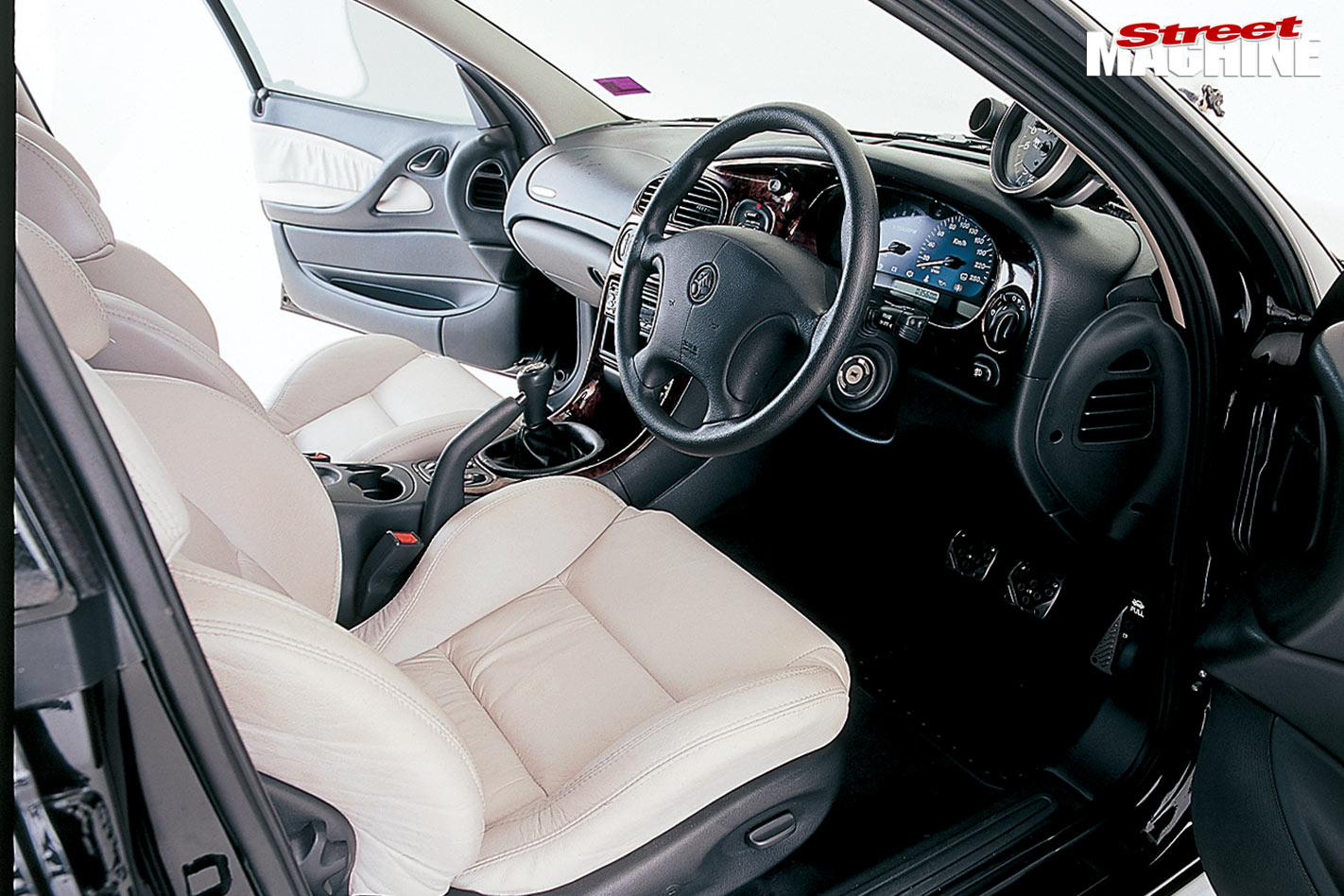 “Underneath will be chromed,” says Anthony. “I’ll go a bit berserk. The block’s all polished and I’d like to do the gearbox too, as it’s alloy as well. I don’t know how far I’ll go with it actually.

There will no doubt be more mechanical money spent too. Anthony has understandable concerns regarding the durability of the standard engine and diff when he wants to enter the drags, burnouts and dyno comps.

“I’d like to get a nine-inch in an IRS housing but it’s big bucks. I’d also like to get a COME stroker crank into the engine. I really want to make it into a tough street machine.”

All of which is more inspiring than surprising. But one surprise is that Anthony admits the car just “fell together, I didn’t really have a grand plan. I just bought it because it was a sleek, quick car. But then I got the itch and, once you start, you can’t stop!” 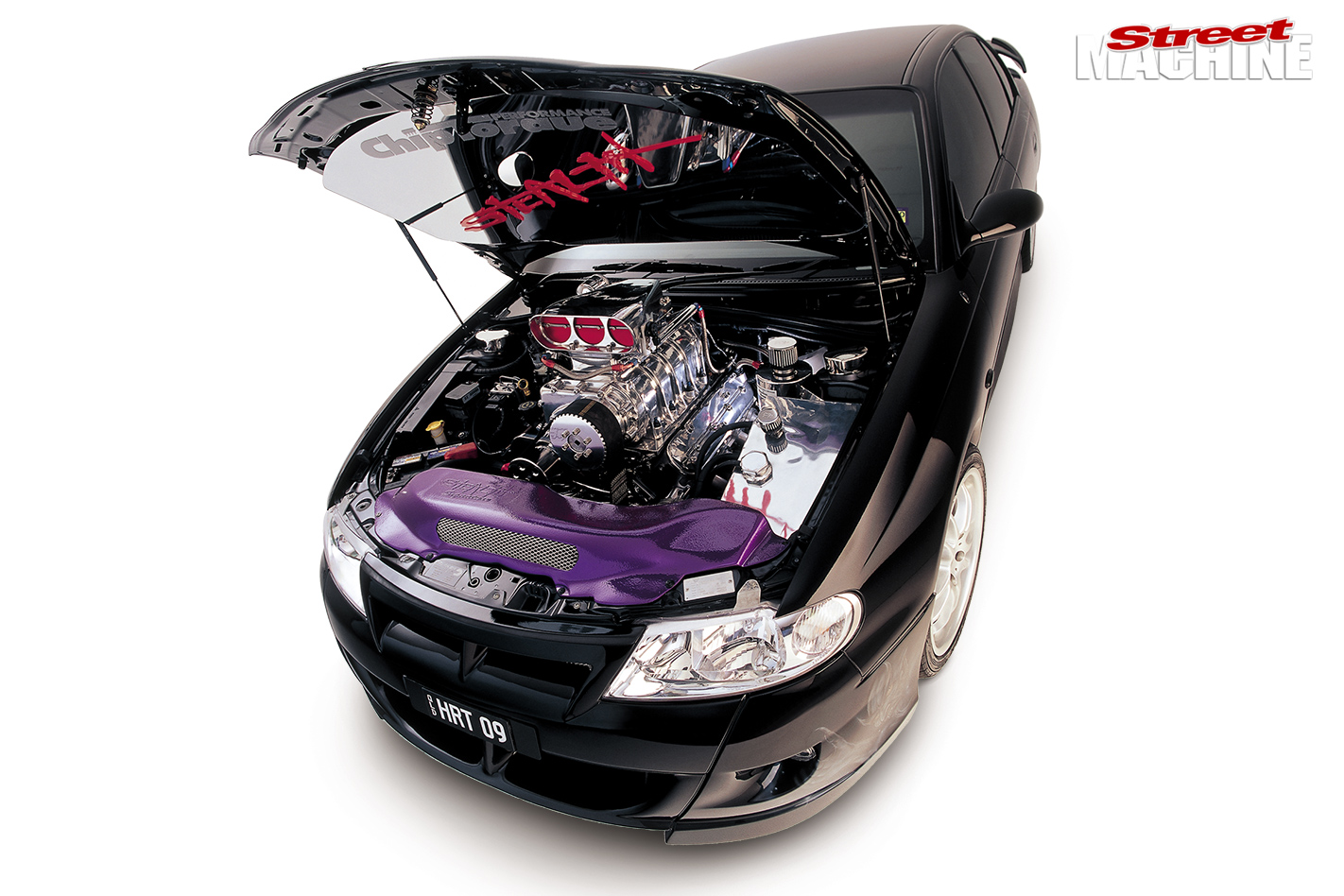 Convincing the factory ECU to run the newly force-fed donk was ChipTorque’s Lachlan Riddel’s task. Lachlan taps into the Commodore PCM with a real-time emulator that allows it to be quickly and easily laptop-tuned ‘on the fly’ to cater for the blower. The software is under control, but the hardware isn’t – yet.

“The injectors are above the hat but they really need to be below, especially with a sequential injection system,” explains Lachlan.

“You get uneven fuel distribution through the blower and you can generate a lean misfire. Plus, the injectors are way, way away from the ports.

“Without having the fuel delivered to the ports, there’s no response. You can squeeze it on and, if it catches, it’ll smoke the bags. Snap the throttle on and you get
nothing.

“So the plan is to fit injectors below the blower in addition to the ones at the top.”