For a former superbike racer, a stock XL was never going to cut it

WE LOVE a good sleeper here at Street Machine, and we’ve seen plenty over the years. 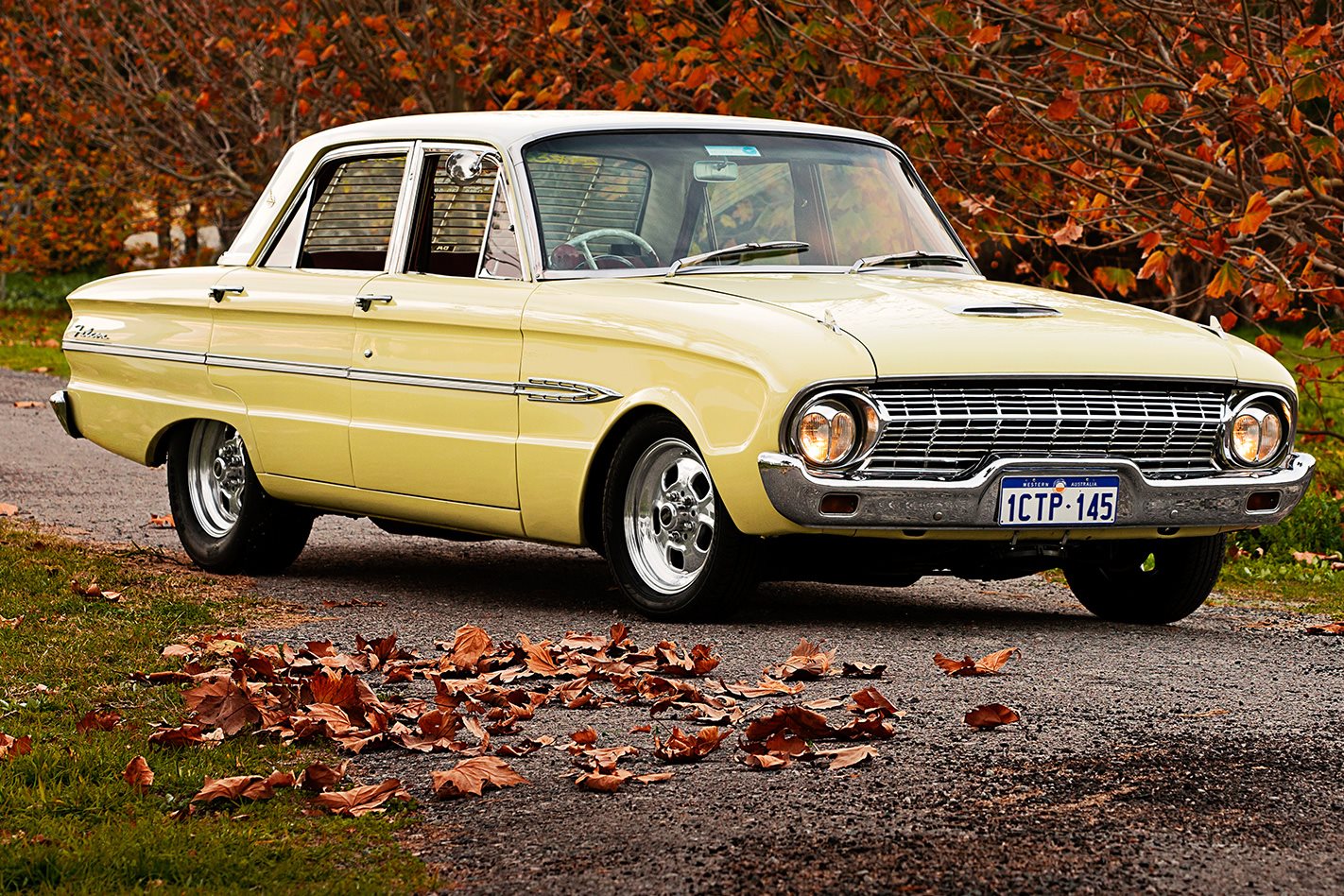 The Weld Rodlites and M/T drag radials are just for the track. Most of the time the old Falcon wears steelies and hubcaps for maximum stealth

You might be thinking it’s not much of a sleeper, sitting on a neat set of Weld Rodlites, but they’re not its everyday wheels. “Most of the time when I drive it on the street it’s got hubcaps on — steelies, hubcaps and venetian blinds,” Wayne says. “The cops don’t even look at it. It’s just a Sunday cruiser.”

But when Wednesday night rolls around, Wayne bolts on the Rodlites and cruises out to Perth Motorplex for a bit of quarter-mile action. And that’s when his Sunday cruiser turns into a street ’n’ strip bruiser. At the moment Wayne’s best ET is a 10.81@123mph pass in the old girl. Not bad for pump fuel, stock suspension and a skinny pair of 235 drag radials.

“I just drive it out there, run it, and drive it home,” he says. He bought the Falcon as a cool cruiser about six years ago for a change of pace. “I raced Superbikes for 11 years. Then I had a big crash and broke my pelvis and hip, so it was time to give up bikes. The idea was to sell all the bikes and go buy a nice Sunday cruiser, and that’s what we did.” 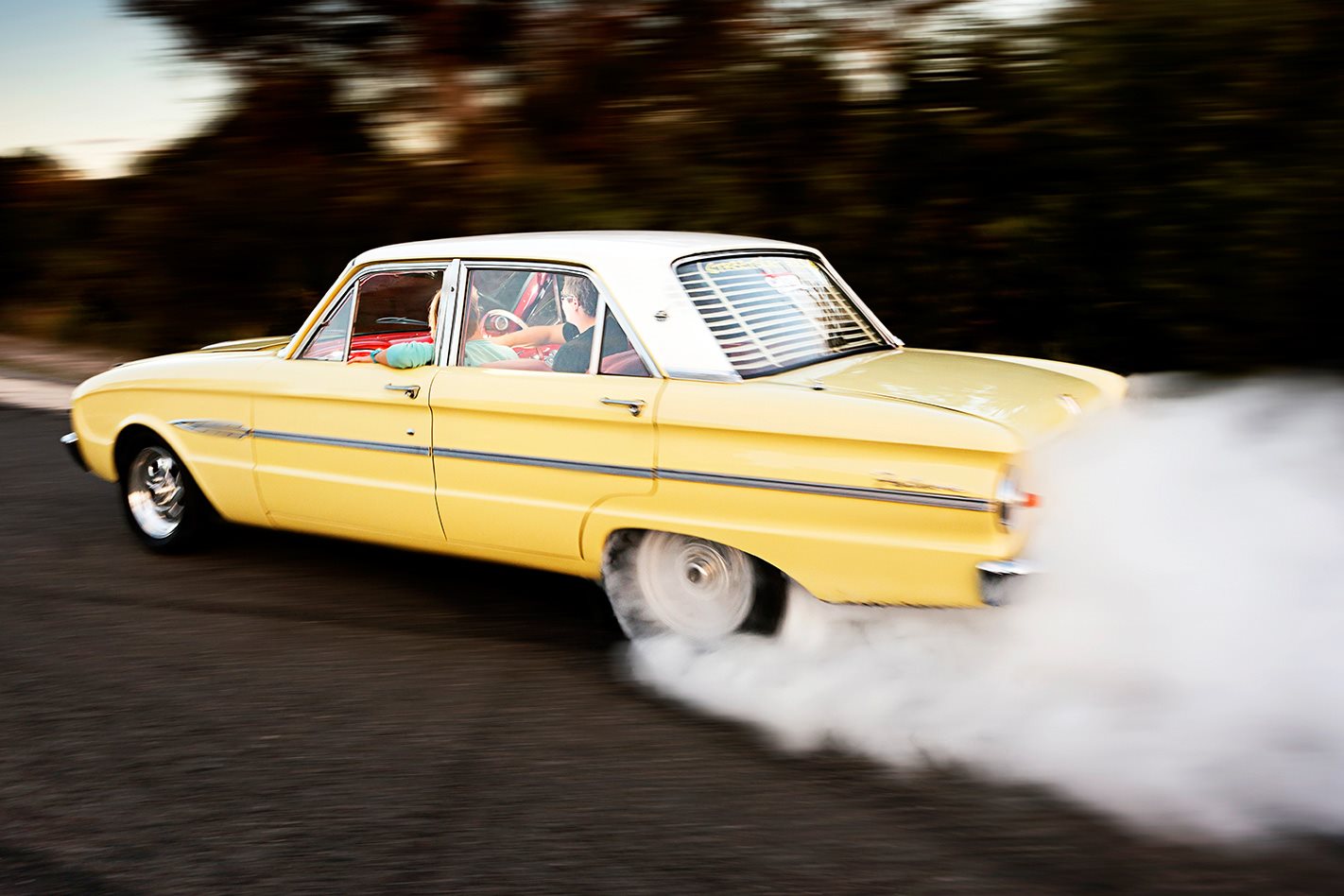 The Falcon was pretty much as you see it here, with standard wheels and an LPG-fed 289ci small-block. “I was just trying to find an early X-series with a really good body. I found that one in Victoria and had it trucked over,” he says.He lasted about six months before the speed bug bit so hard that he had to do something.

Talk about a wake-up call for the old girl! The early bird went from snoozy cruiser to quarter-mile screamer in a heartbeat and with 450hp at the treads it had no problems reeling off flat 11s at 127mph. That lasted for another two and a half years before a smashed piston sent Wayne back to the workshop. 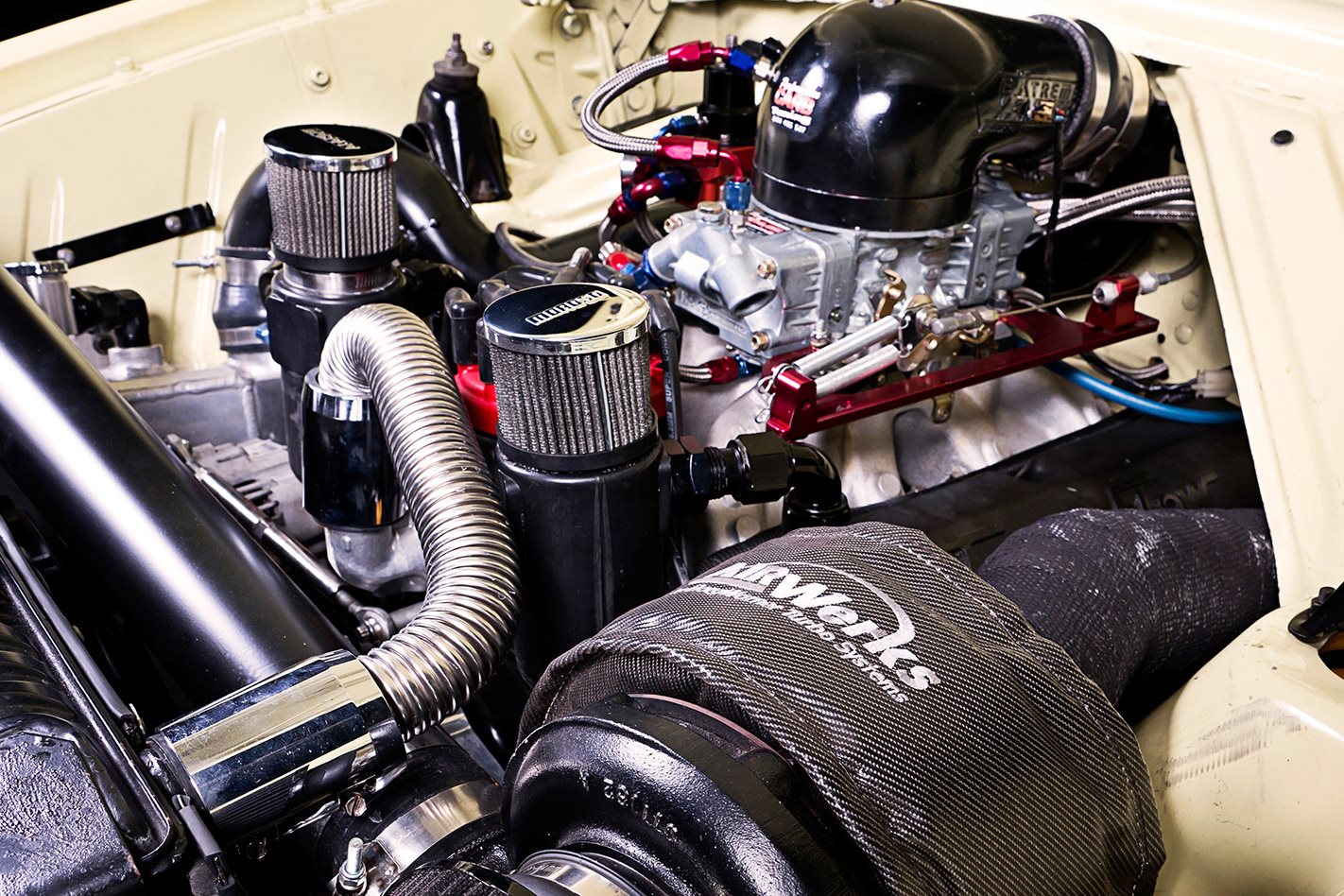 He ditched the 185cfm heads for better-flowing 205cfm AFRs and the little Paxton blower for a Vortech YSi. “That set up had more than 600hp at the tyres but it was too much for a street car,” he says.

Even detuned to 500rwhp the Falcon ran an easy 11.0@130mph, but it was crazy-loud and barely streetable. He only raced it once before deciding it wasn’t the way he wanted to go. “I wanted something a lot quieter and a bit more street-friendly,” he says.

So they dragged a 185,000km AU Falcon five-litre donk from under a mate’s bench and dusted off a set of GT40P heads. The heads got little more than new valve springs, while the bottom end remained stock except for a new timing chain and oil pump — he even kept the factory hydraulic roller cam. 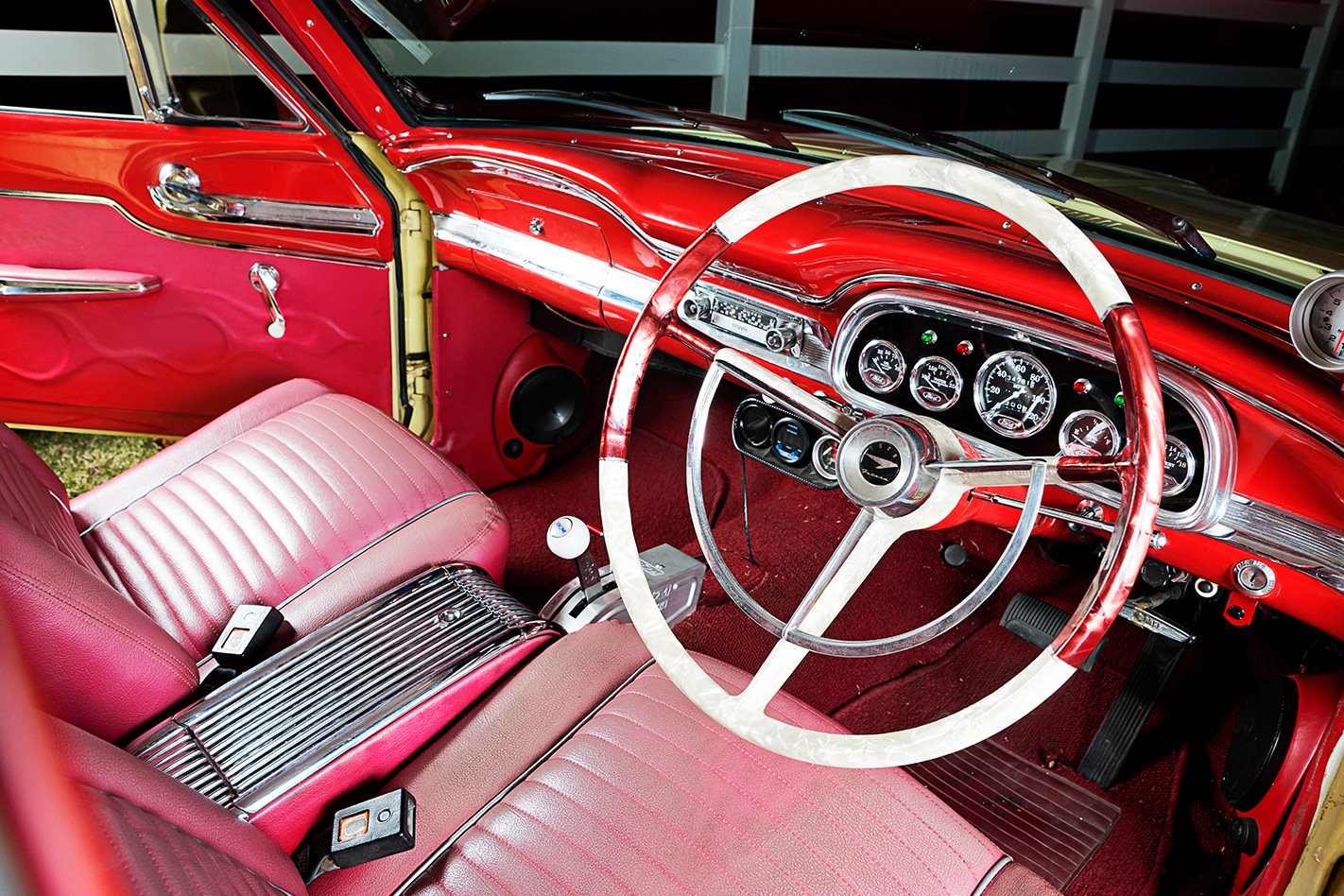 Inside it’s pretty much how Wayne bought the car but he’s planning to give it a spruce-up in the future. In the meantime they’re having too much fun driving it

Up top, Wayne fitted a Victor Jr intake with a self-prepped blow-through 600cfm carb and an Extreme Velocity hat. He recommends not scrimping on the blow-through accessories and went with an Aeromotive rising rate regulator and A1000 pump.

He built the turbo manifolds himself, out of steam pipe bends, and there’s a mild steel crossover joining the two banks under the front of the motor. The turbo is a BorgWarner S300 that he reckons is the perfect compromise of price, power and reliability. 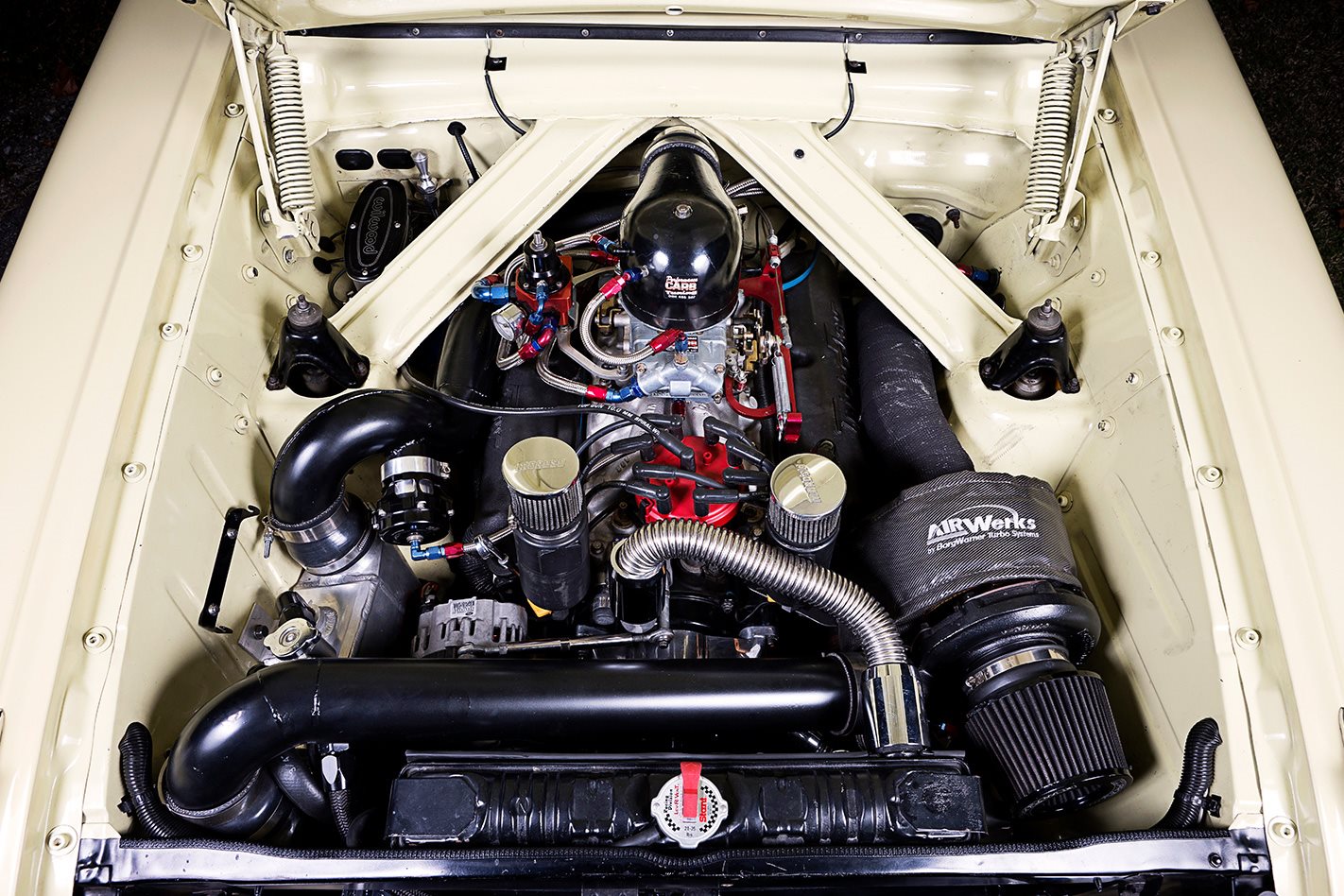 It’s a pretty tight fit in the Falcon’s engine bay. “It all goes in in a certain order or it doesn’t all go in,” Wayne says. Changing the sparkplugs is a half-day exercise

To keep intake temps down, Wayne imported a Frozen Boost water-to-air intercooler from the US — it’s bolted to the driver’s side inner guard. “I couldn’t fit a big enough air to air in the front,” he explains.

Though he hasn’t dropped it on the dyno yet, the new set-up has already proven itself in the real world by running high 10s at Perth Motorplex. But the best part is the drivability. “It’s nice to drive — real nice,” he says. “If you’re not on boost it just cruises around. We drive it everywhere and cruise nearly every weekend. That’s what I was missing when I had the blower on it.

“It’s got four mufflers from when I had the supercharger on it and it was still quite loud but now you can’t hear the thing running.”