Who would have thought that a battle between 100 of Australia’s toughest streeters would see a Holden V8 on top?

WHILE the rest of the world is busy swapping LS engines into everything from old 60s pick-ups to Ford Falcons and Mopar muscle cars, Brenden ‘Bubba’ Medlyn is sticking with the good old Holden V8. That faith in the Aussie bent-eight was rewarded with the overall win at the toughest street-and-strip event in the country: Street Machine Drag Challenge.

“I was in disbelief until it was officially announced,” Bubba says. “People were congratulating me before the presentations, but I wasn’t sure I’d done enough with guys like Terry Seng and Jarrod Wood running sevens on the last day.” 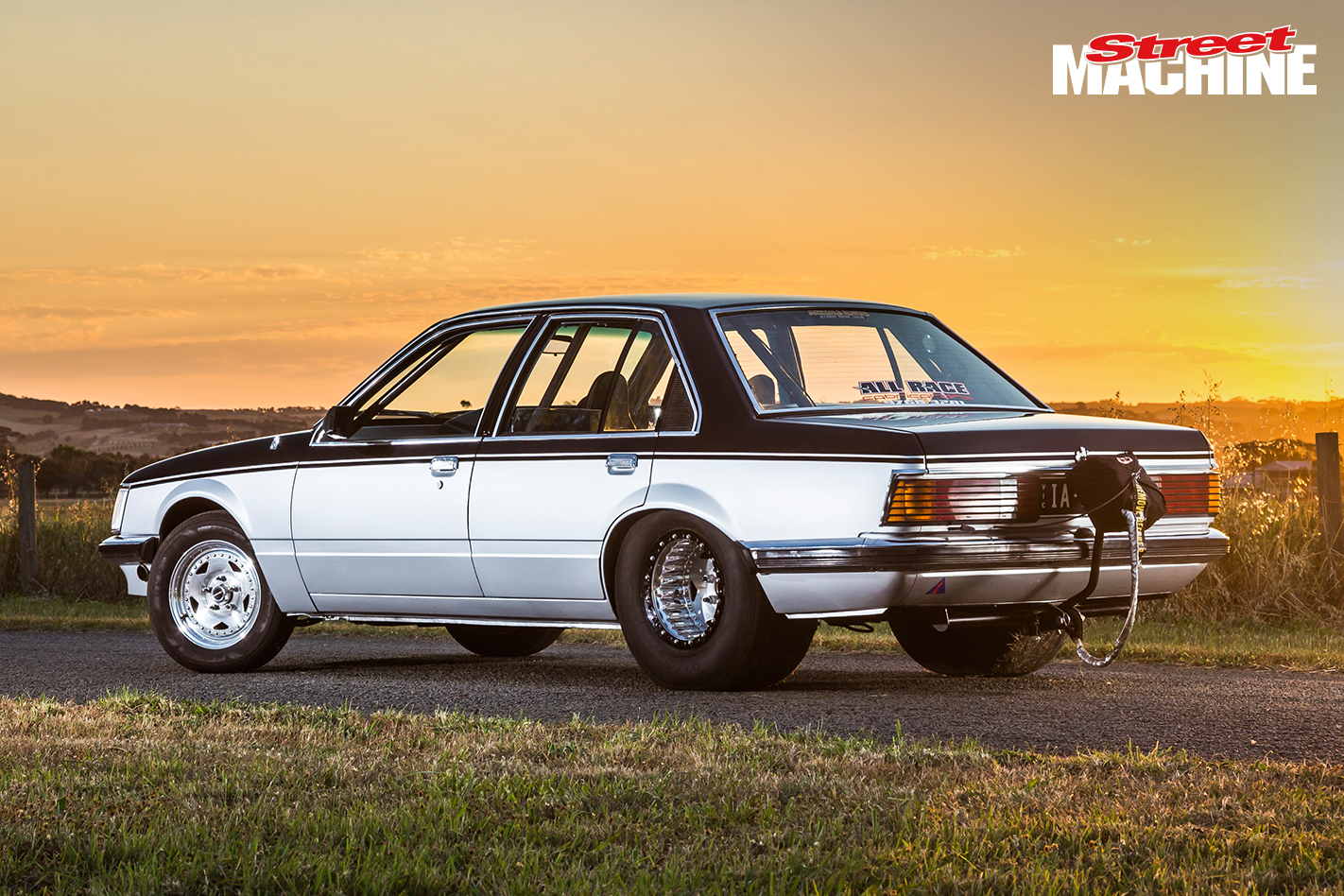 So here it is, Australia’s Quickest Street Car for 2016, powered by Aussie muscle. Bubba’s reason for staying with the Holden V8 is about as simple as it gets. “I stuck with the Holden V8 just to piss everybody off,” he says. “Everywhere you go it’s just LS engines now. I like to be different, but it means everything is custom and that’s definitely not cheap.”

Bubba has got a long history of fanging V8 Holdens around various Victorian car events, and up until now he was probably best known for his old ‘Don’t Tell Mum’ turbocharged VH Commodore. “We did some stupid shit in that car,” he laughs. “Massive powerskids and jumping it off gutters; there was no dare we wouldn’t try.” 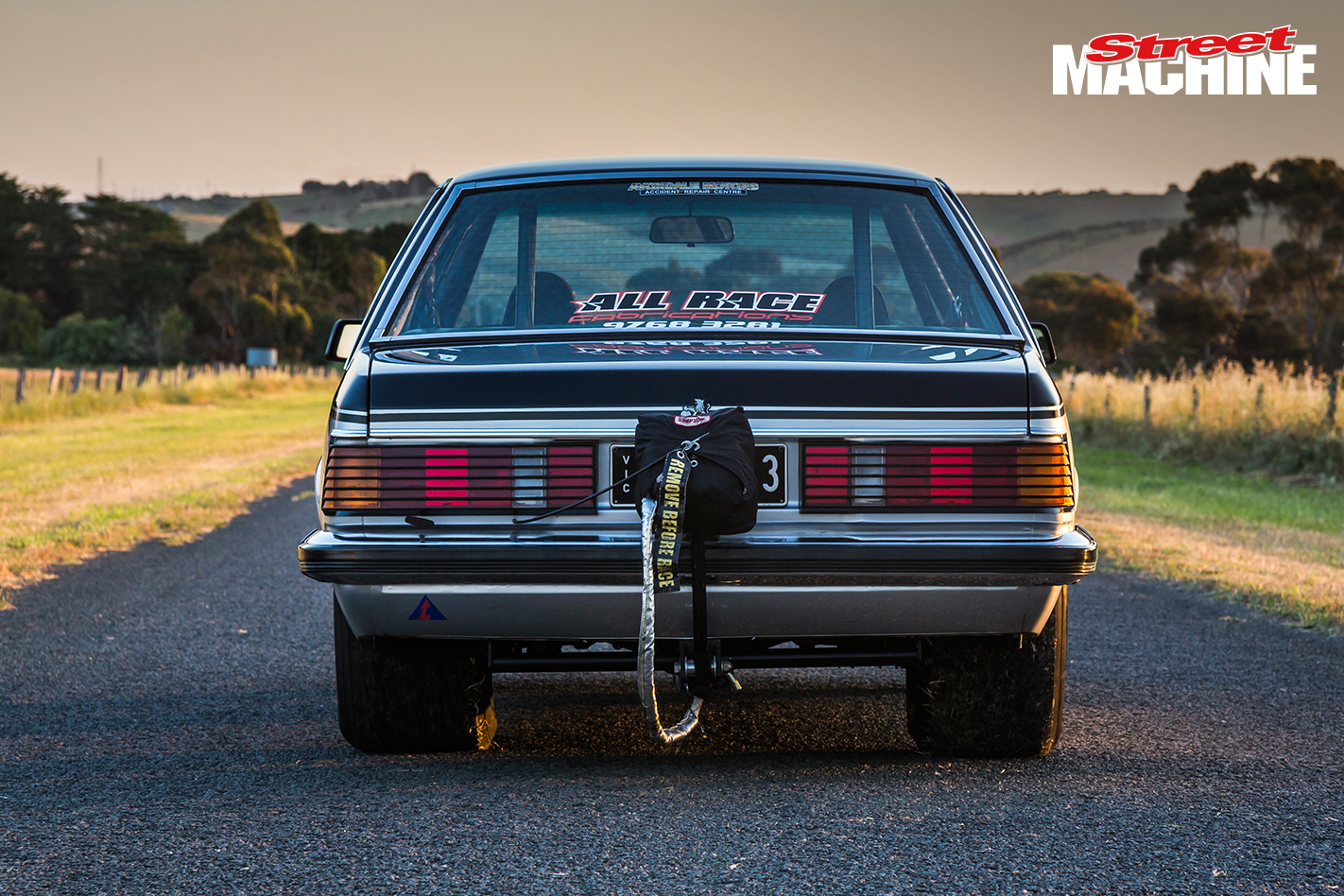 Then he bought All Race Fabrications, and the guys reckoned he needed something nicer to represent the workshop. That saw the old twisted shell retired and another shell was found at All Week Wrecking. “I’ve got to give them a plug,” Bubba says. “They gave me the shell for nothing.”

With the team at All Race at his disposal, Bubba set about creating a powerskidding monster. Everything was done in-house, from the mini-tubs to the chrome-moly ’cage and the engine-bay work. They just gave it a coat of flat black in the workshop because Bubba reckoned he needed to learn to drive it before they made it pretty. The 355ci engine was transferred over from the old car, but that’s about all, and even that didn’t last long before a heavy right foot broke the crank and rods. Going to an LS combo like everyone else wasn’t even considered. Instead, Bubba put a call in to Craig Bennett at Torque Power for one of his Little Paw cast-iron Holden V8 blocks. 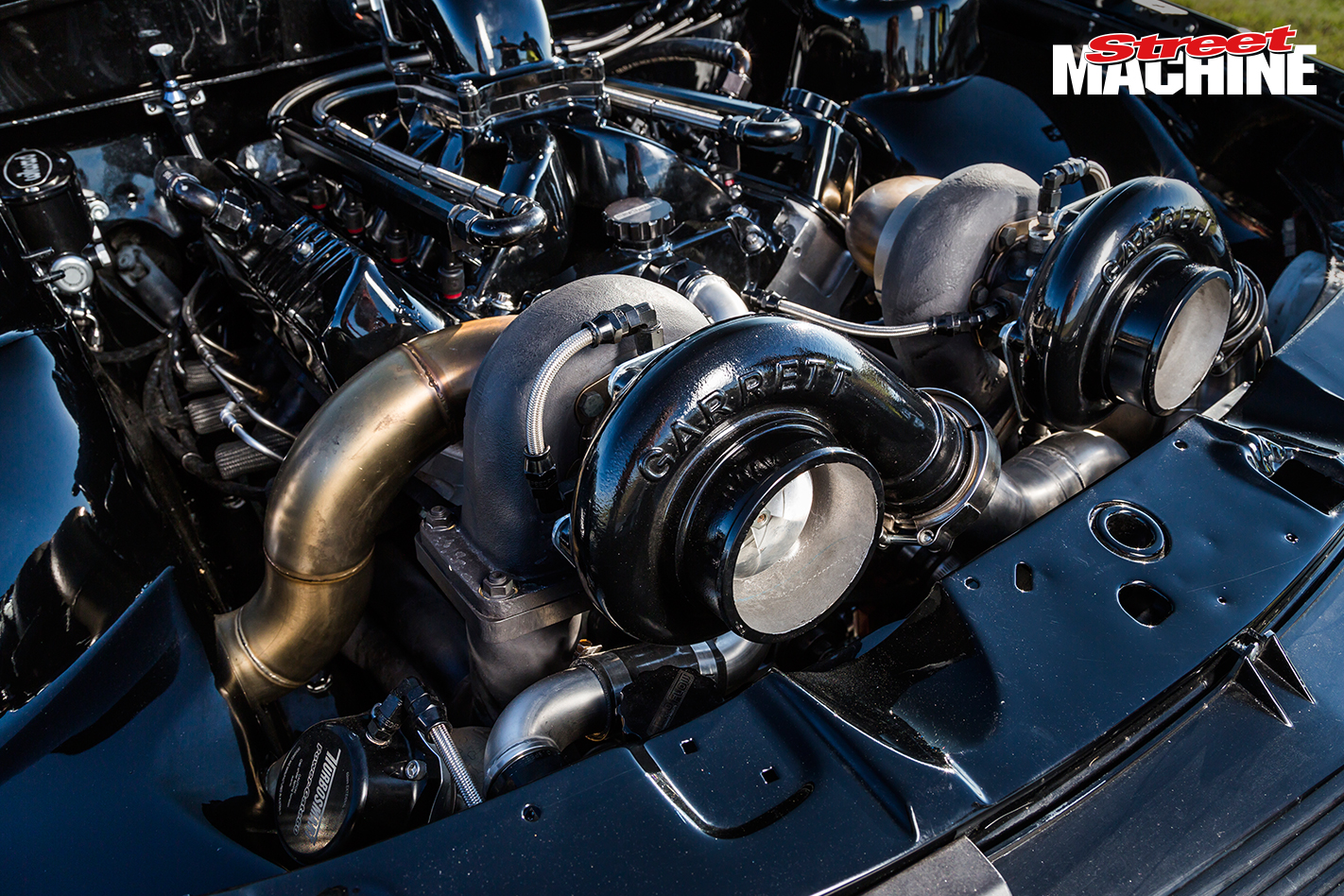 Good mate Daniel Nunziante put Bubba onto Glenn Wells Engines to handle the powerplant from start to finish, and Glenn came up with a 370ci package that is currently pushing out 1009rwkW – that’s 1352hp at the treads! Obviously it’s got all the good gear: COME billet crank, Carrillo rods, JE pistons and CNC-ported Yella Terra –9 heads. The tuning of the Haltech Elite ECU has been handled by Jason at Tunnel Vision, who also made the turbo headers that position the snails out in front of the engine. One of the more trick features is that the pipes for the water-to-air intercooler run through the sills to the heat exchanger in the boot before returning to the front and into the 115mm Wilson throttlebody – it’s all hidden. “My intake temps are awesome,” Bubba says. “Even on a hot day they don’t get over 30 degrees.” 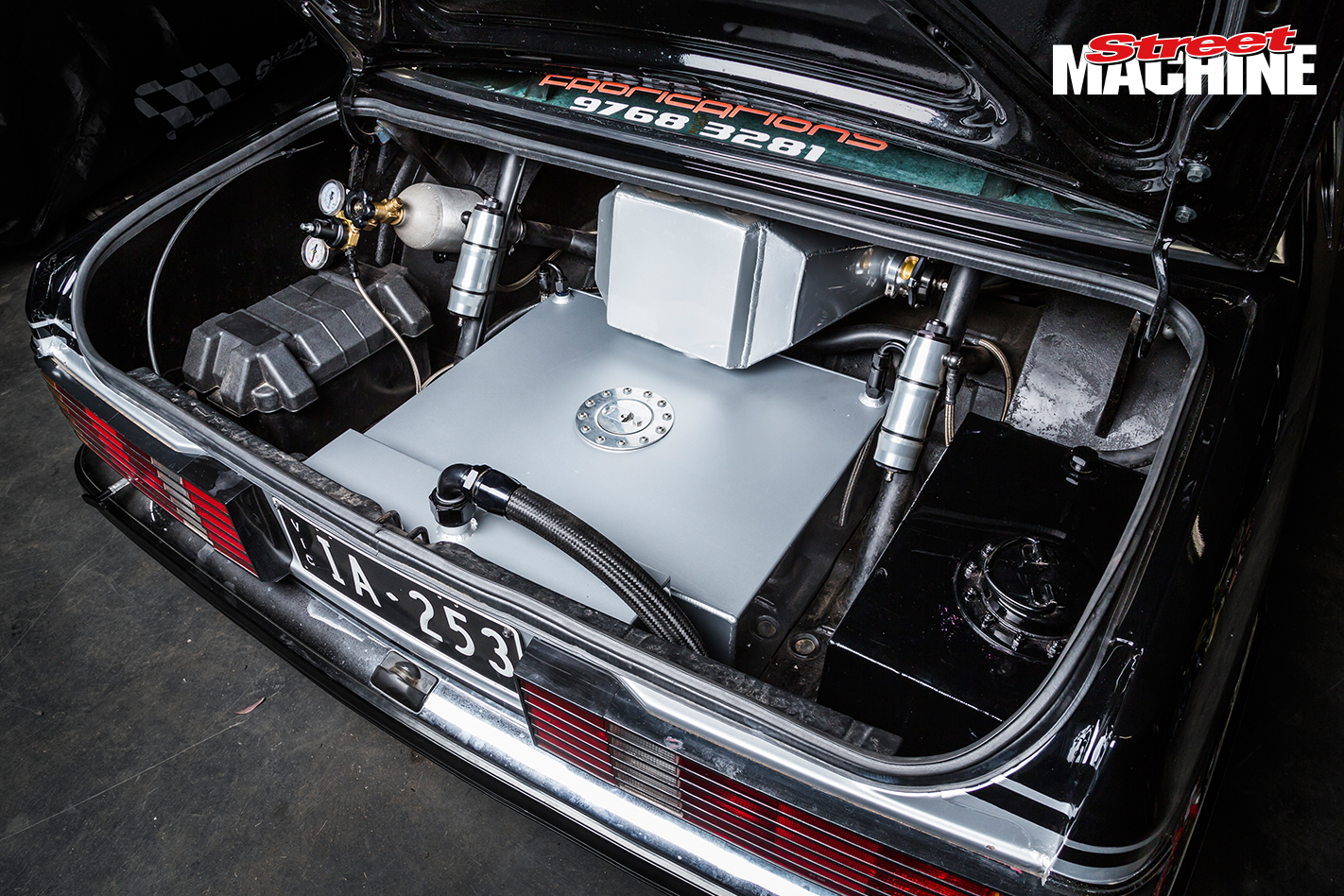 The rest of the driveline is about what you would expect for this level of car, full of heavy-duty bits made from unobtainium designed to transfer obscene amounts of power to the ground as rapidly as possible. The guys from All Race handled the custom 35-spline nine-inch, while the insanely tough trans was built by Matt DeSpirt from MDT using a ProTorque 3000rpm converter.

Last year the guys fronted up at Drag Challenge with Jason still tuning the ECU in the left-hand seat. Bubba’s week started with 9.7s at 144mph and ended up with 8.7s at 162mph as they got a handle on the tune and boost. 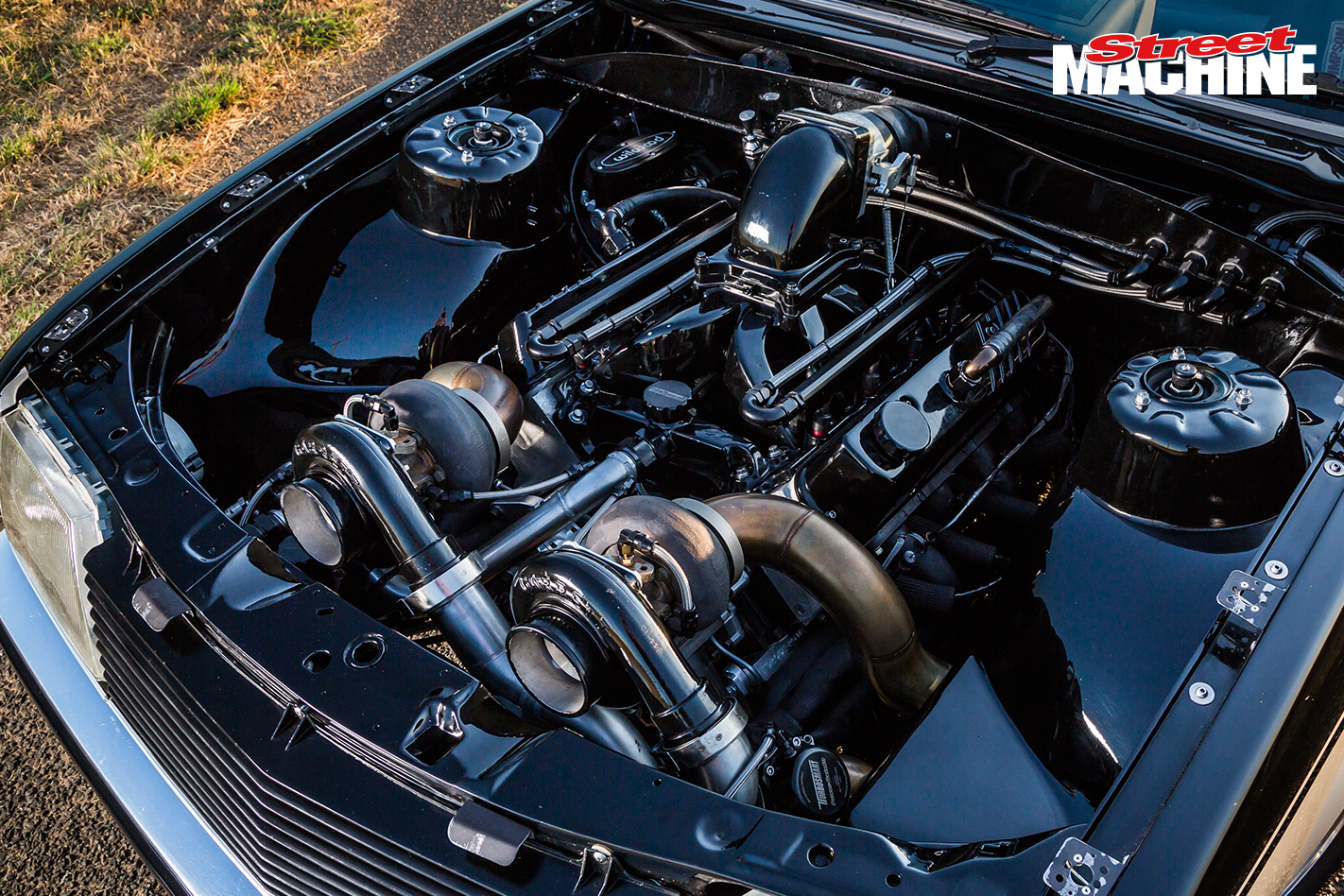 This year they embarked on a full makeover, although that wasn’t really the plan initially. It all started with the engine coming out for a freshen-up and check-over, and the boys at All Race decided the engine bay could do with a spruce-up in gloss black, which then became a full paintjob in gloss black. Then they shipped the Commodore out for proper paintjob, and by the time it came back from Avondale Motors, the design was SL/E-style gloss black over silver. 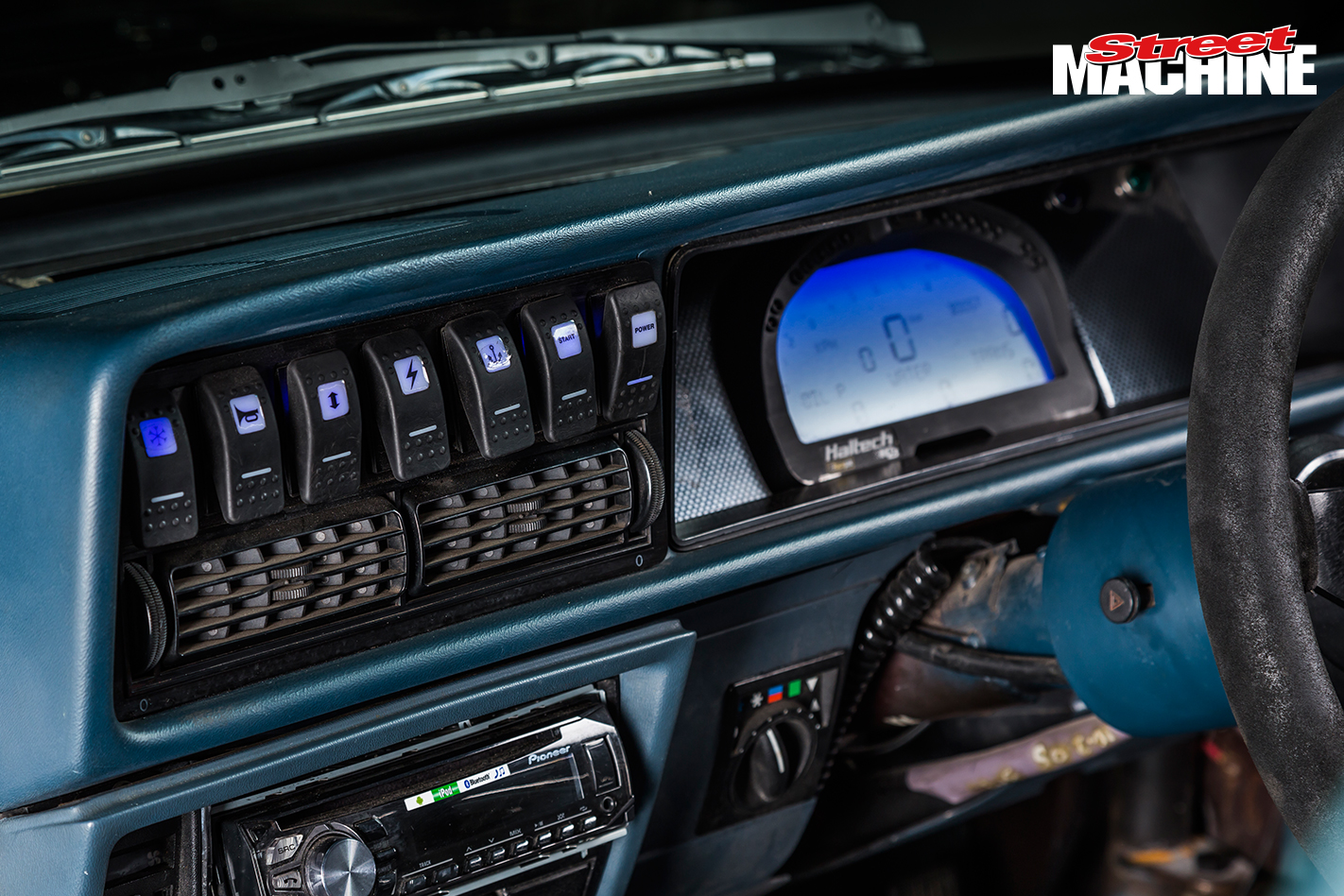 Naturally it had to go back in the booth two weeks before Drag Challenge, when Bubba decided the car needed bigger tyres and they had to modify the rear guard openings. The last-minute thrash saw the whole kit and caboodle back together in time for some dyno testing, where it punched out the aforementioned 1352rwhp, before they headed to the track for Drag Challenge 2016. 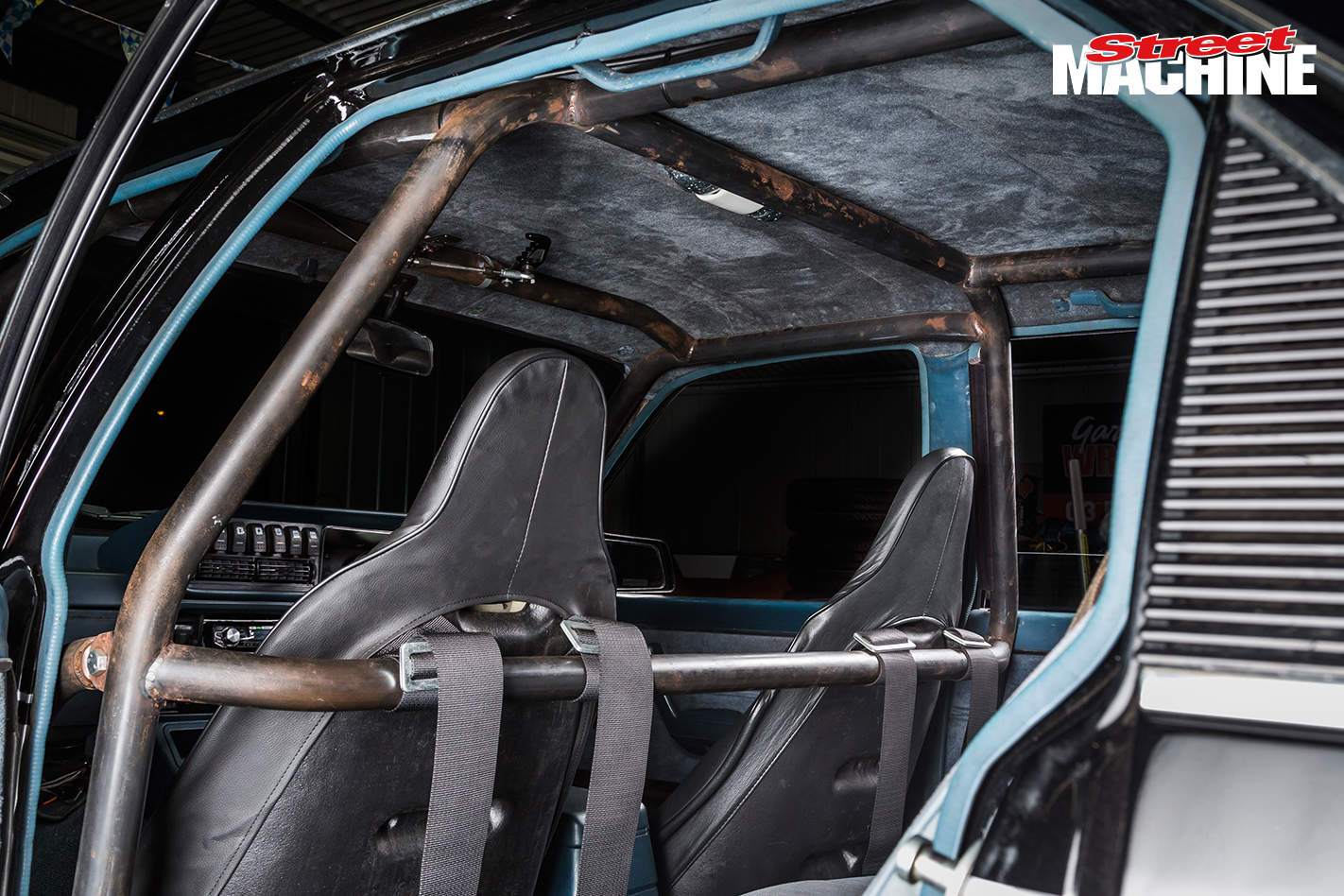 On Day One most teams were struggling to put the power down, and then in rolled Bubba to lay down an 8.2 on his first pass. This was quickly followed by an 8.1 and then an 8.0 before the guys packed up and hit the road while the rest of the field picked their collective jaws up from the ground. For the rest of that story you can head to our Drag Challenge yarn which starts on page 126.

Suffice to say that Bubba is pretty happy with how everything panned out. He ran low eights all week and proved there’s still some life in the Holden V8. Who needs an LS engine? 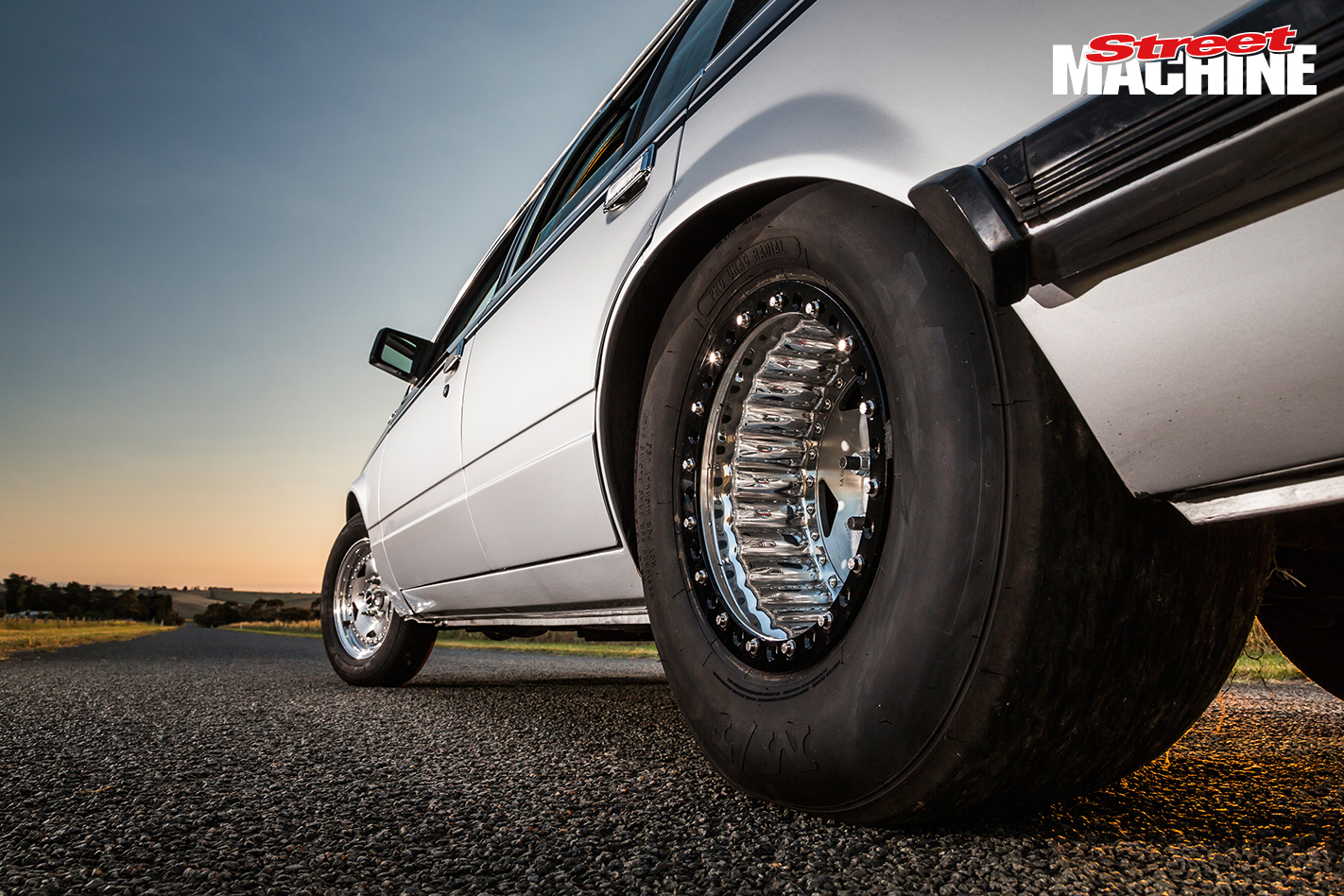 So what does the future hold for Bubba and his giant-killing Commodore? “I want to run sevens comfortably, and then I want to go to Powercruise in February and powerskid the hell out of it,” he says. “Actually I’ve got a good story about that. Last time at Powercruise I was screaming past everyone on the main straight with the tyres absolutely smoking and I get pulled in. They hand the two-way to me and it’s [Powercruise promoter] Gup on the other end. He goes: ‘That looks insane, but as much as it looks insane I need you to slow it down.’ It was the nicest way I’ve ever been told off in my life,” Bubba laughs. 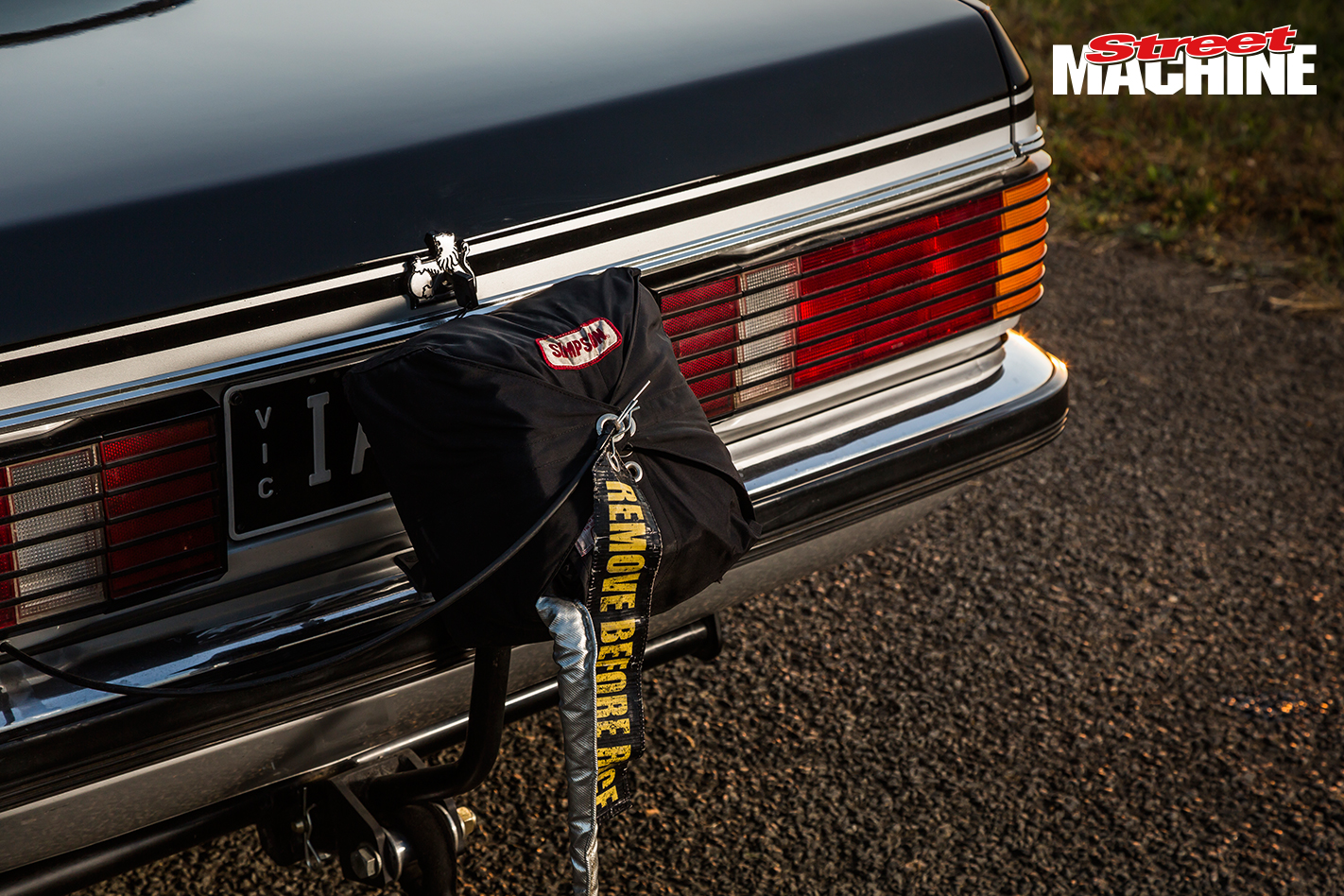 As for Drag Challenge next year, he’s already got some plans. “The new turbos we’ve got are too small, so we’ll definitely have new turbos next year, and maybe we’ll look at more cubes, but that’ll be Glenn’s call. “I can’t wait until next year; I reckon it’ll be hard to stay in the Top Five with some of the cars that are getting built, but we’ll give it a crack.” 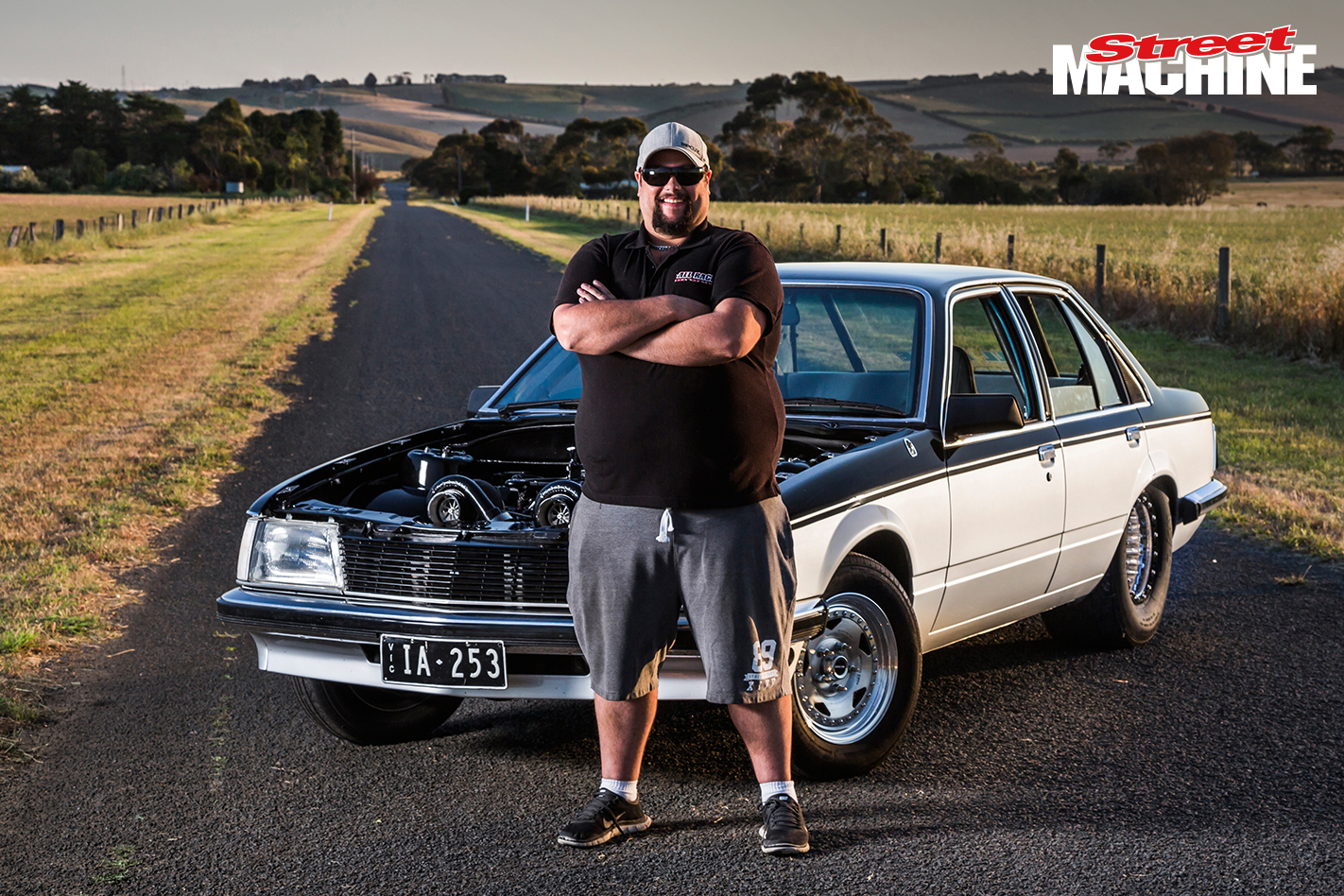 THANKS
All Race Fabrication – Brett, Kane, Shawn and Fab; Daniel Fox at Avondale Motors; Glenn Wells Engines; Matt at MDT; Craig at TSR; Craig Sutton Engineering; Marcus at Speed Pro; Higgins Race Heads; Stix at QuickBitz; Jason at Tunnel Vision; Pazzo and Spy for helping with the set-up and racing; my dad Phill Medlyn, who always said I should smoke rubber and not drugs 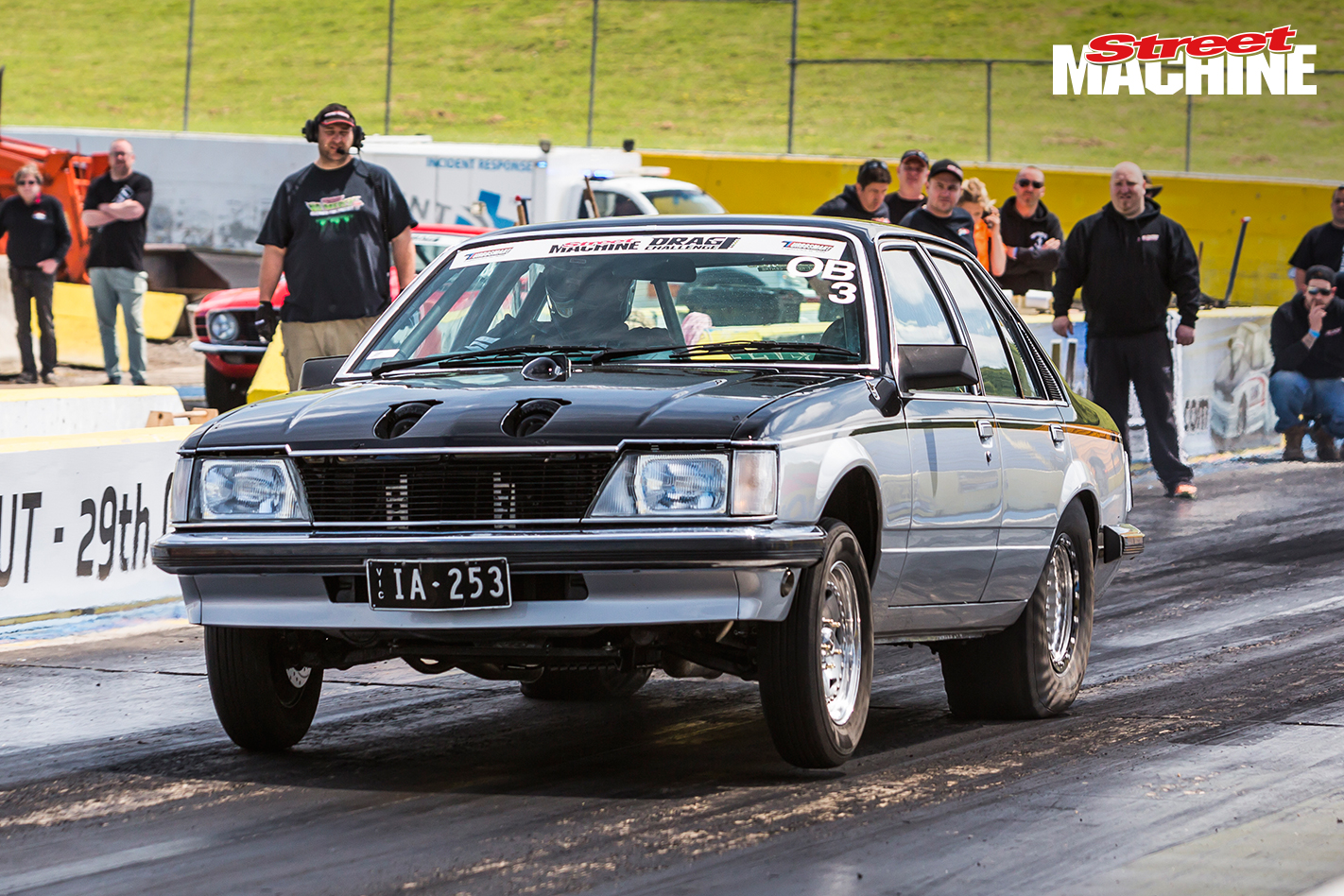