LOU Ackovski’s double garage is, at first glance, typical of most you’ll find in Melbourne’s outer suburbs, but it’s anything but usual. There are a couple of sturdy workbenches, some big toolboxes and a pretty serious lathe. On one wall, there’s a large collection of trophies, and nope, Lou didn’t get those from playing golf. He earned them building choppers; insane-looking, stretched-out beasts, with super-fat rear rubber, ultra-low seats and mind-blowing attention to detail. He’s still got his most recent build in the shed, sitting under a cover. It looks like a bike Satan would happily ride, but it has barely been touched for the past two years. Instead, Lou has been busy building one of the wildest HQ Holdens ever. TOXIC Q (named after Lou’s choppers) looks like the product of a high-end shop, but apart from the trim, engine-build and paint, everything was done in Lou’s humble shed – including the custom bodywork, engineering, fabrication and wiring. “The HQ was just a stocker,” Lou says. “I bought it a few years ago and it just sat out the front of our house. It looked pretty sad; the kids even decorated it for Halloween one year. 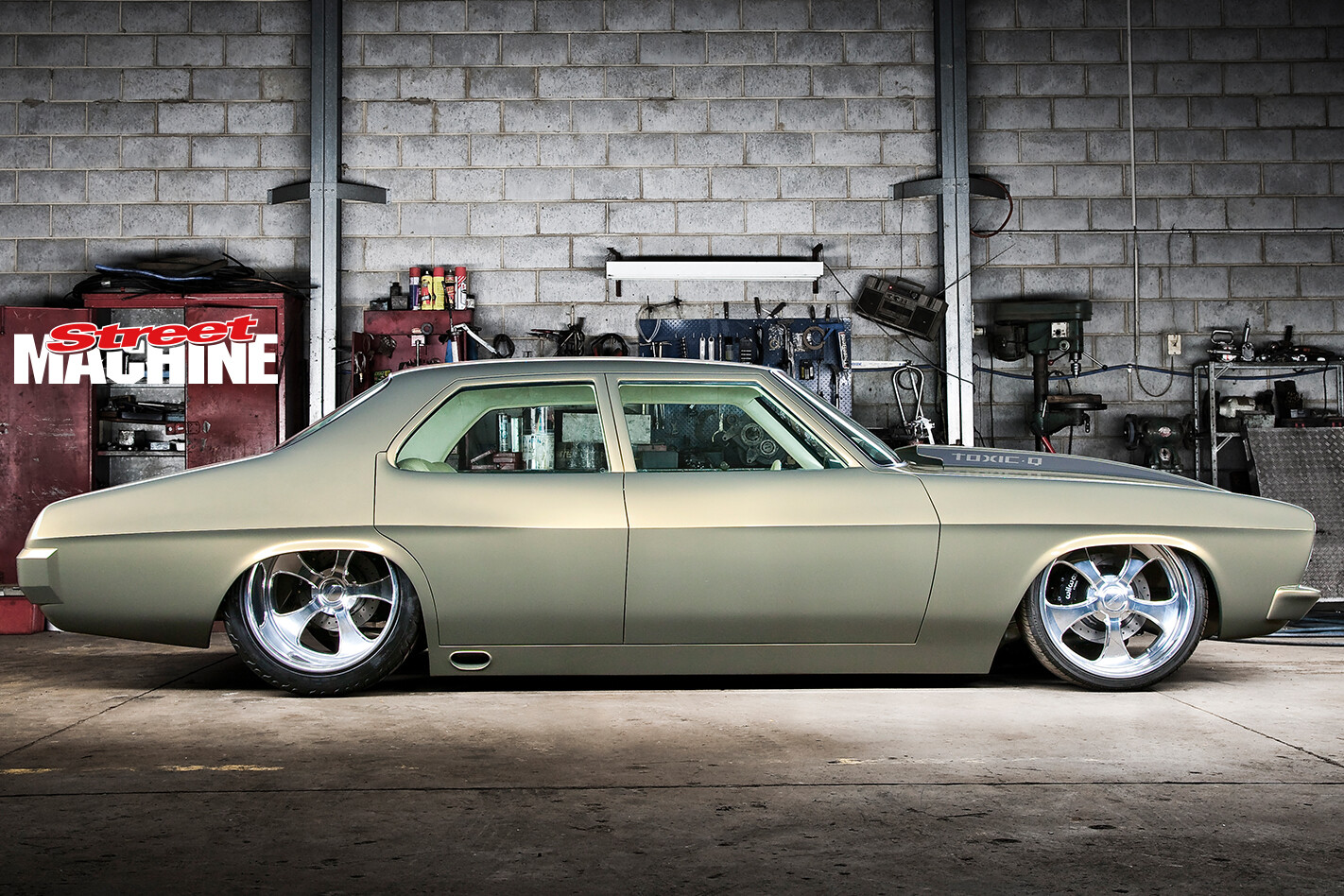 “It had been a long time since I’d built a car. About 20 years ago I had a tough VK. I mini-tubbed it and my older sister lent me some money for some wheels – Simmons B45s of course! Then I got into choppers in a big way. I brought in a frame from the US and built my own bike, then I made a jig and started building my own frames and they got pretty wild. “In the last few years, I began to drift away from the bike scene and I started hanging out with one of my mates from Marsh Rodders,” Lou continues. “I went to some of their events and was really impressed by the whole family vibe. I got enthused about turning the HQ into a tough street car, so I looked around and found the wheels I wanted. That is my philosophy – you have to start with the rims and build the car around them.”

Like his bikes, Lou went ultra-fat on the rear and specified a healthy four-inch lip on the front. “The guy at the wheel shop told me that those rims wouldn’t fit an HQ. I told him not to worry – I’d make it fit.” 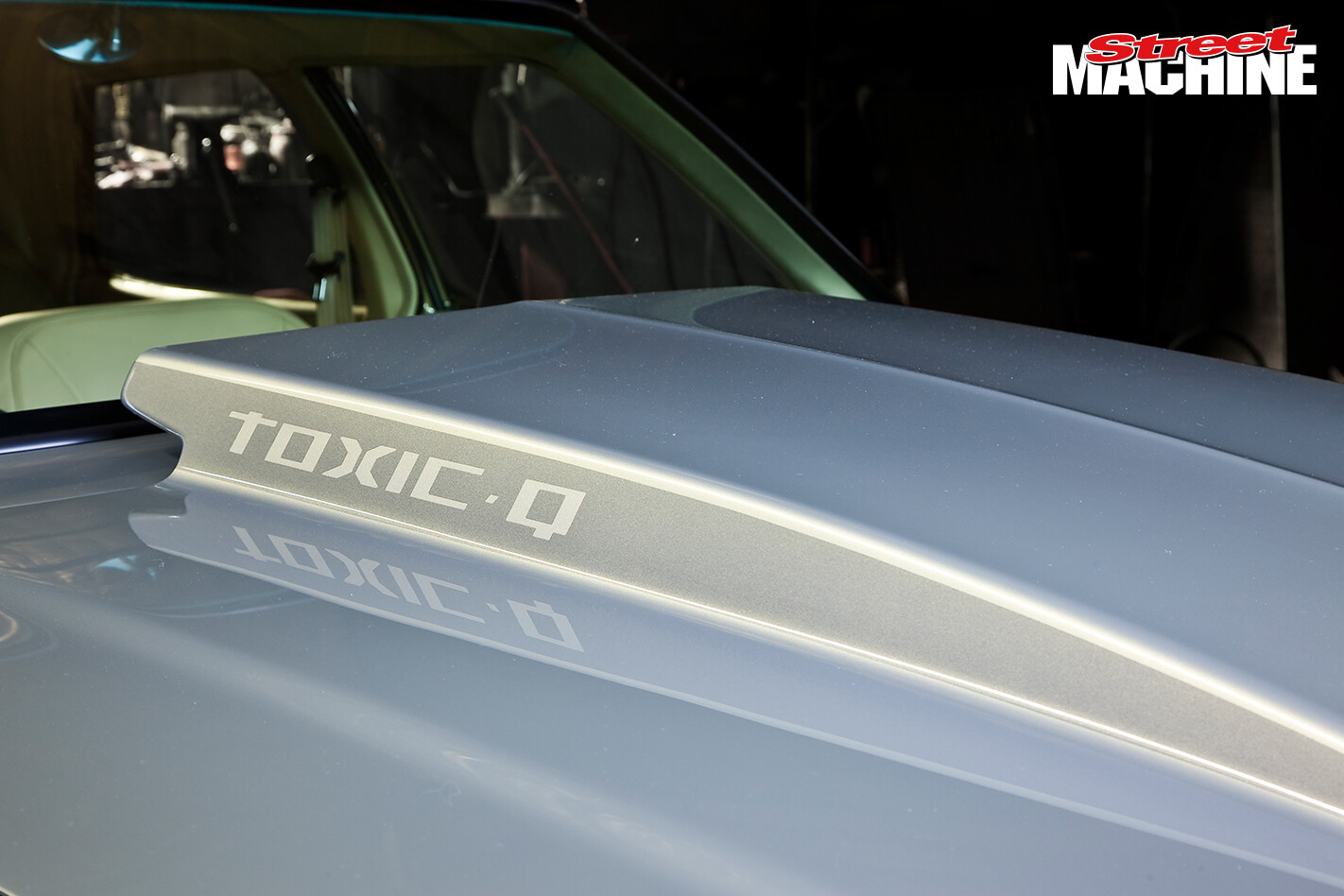 Once the rollers arrived, Lou got stuck straight in. “I ripped off the vinyl roof, cut the floor out and sat the wheels under the body. It looked tough, like one of my son’s Matchbox cars. Then I had to figure out how to make it all work.” What that meant was reimagining the entire structure of the car, including raising the floor to clear the tailshaft, fabricating a four-link out back and cooking up some tubular suspension arms at the front. These narrowed the front end by around six inches and accommodated the dish on the front wheels. Throw in a set of drop spindles, airbags, new inner guards and a set of massive wheel tubs and Lou was able to get the HQ sitting down hard over those 20-inch rims – something many aspire to do, but few achieve. Not only was all of this done at home, but in a relatively short space of time – under two years. “Midway during the build, my father passed away and I stopped working on the car to spend time with my family,” Lou says. “After eight months, my wife encouraged me to get back into it and it felt right. Not only did it take my mind off things, but I knew Dad would have wanted me to finish the car; he was always very proud of my bikes and took a great interest in the HQ.” 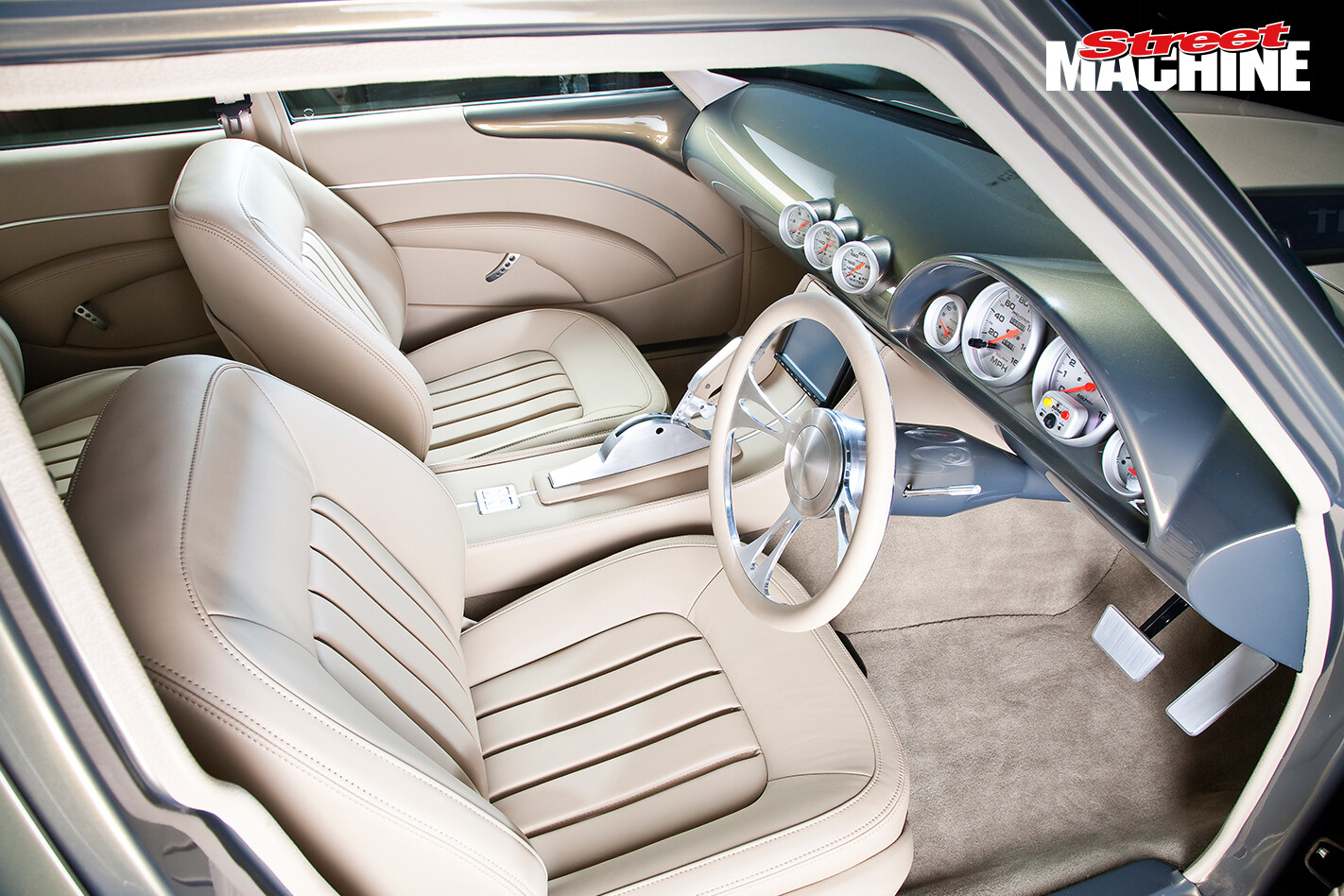 To get the job done, Lou worked 12-hour shifts for three days a week at his day gig, leaving four full days a week to play with the car. “I went at it pretty hard,” Lou says. “I’d get up at 5:30am, have breakfast then go into the garage and do whatever quiet stuff I could do, setting things up, sketching and planning. Then when it got to a respectable hour, I’d start grinding and welding.” 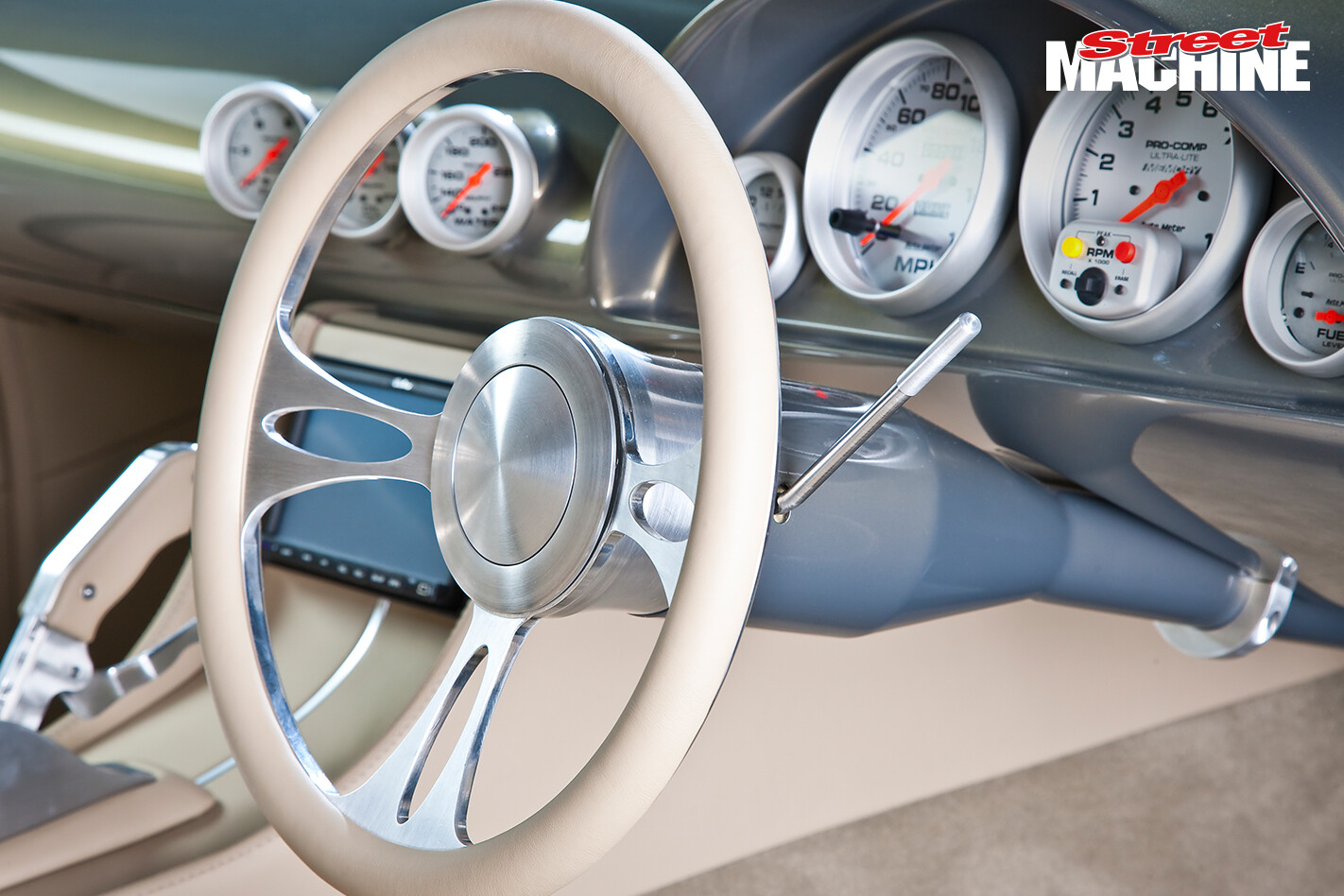 And there was plenty of that to do, with every panel of the car copping major mods. The biggest job was the roof chop, slicing 21/2 inches from the front and 1¾ inches at the back. “I was careful not to over-chop it,” Lou says. “You can go too far and they end up looking like someone dropped a bus on the car.” The end result is swoopy, but somehow factory-looking – the ultimate aim of any custom bodywork, surely? Another major mod, designed to emphasise the car’s stance, was the extended sills, which drop the body even closer to the deck and feature neat side exhaust cut-outs. Maximum smoothness was also the aim of the remaining bodywork. How smooth? Well, we’re talking about deleted gutters, scuttle panel, front blinkers, rear quarter windows, door handles, locks and one-piece front sheet metal, just for starters. And with all factory stainless steel removed, a lot of work was needed to fill in the gaps the trims would normally cover, such as around the A-pillars and at the bottom of the rear ’screen. The HQ’s signature side style-line was significantly sharpened and the bumpers were cut down, pulled in and moulded to the body. The engine bay, undercarriage and dash all received the same treatment. 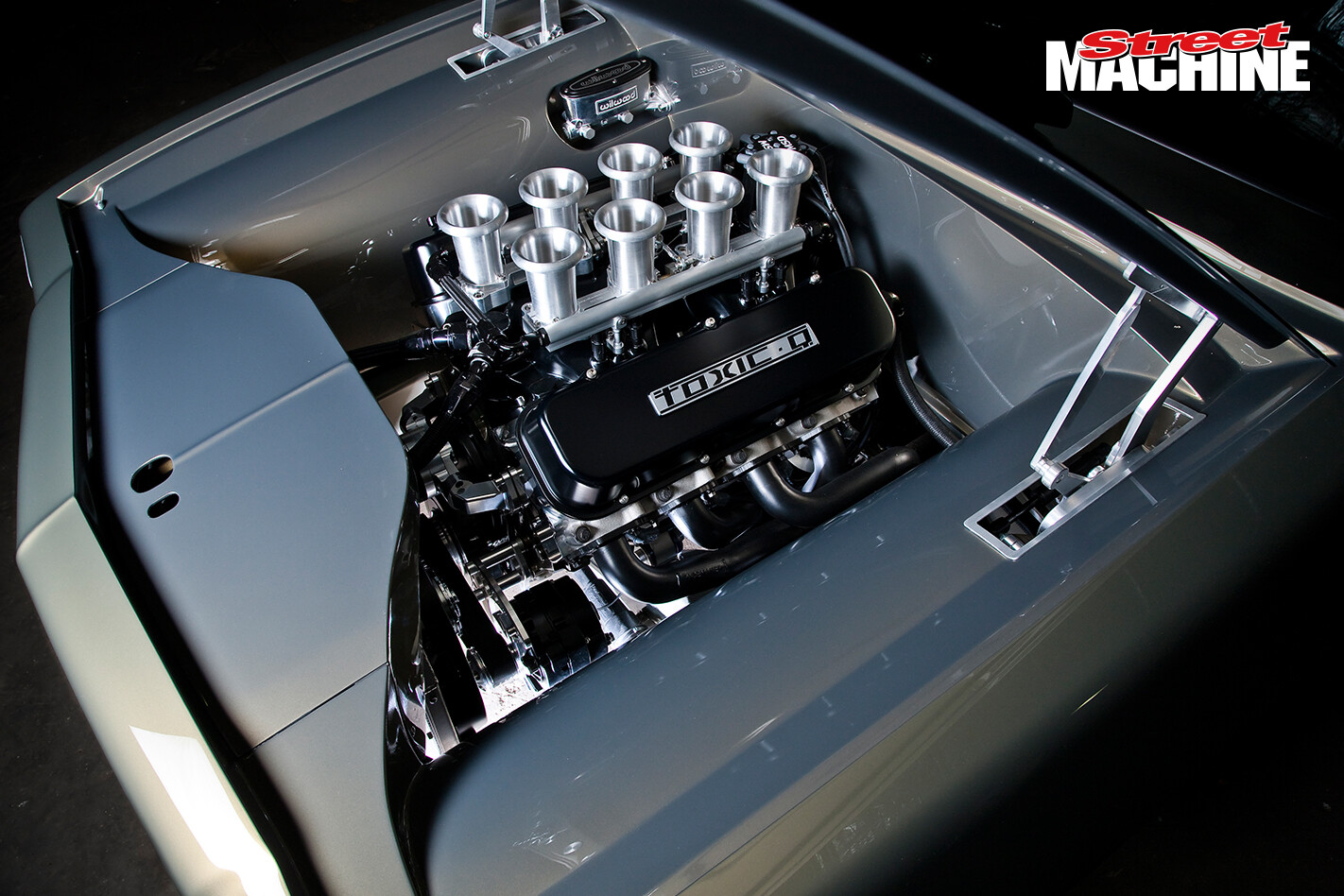 Such a classy exterior demanded an equally stylish interior, so Lou called in Emmanuel Bazzano from The Trim Shop. “I’d seen the kind of work Manny was capable of, so with a few provisos – low back bucket seats and the full-length console – I gave him free reign,” Lou says. “He had a lot of great ideas, but watching him work was mind-blowing. We started with a set of VE buckets, which I cut down and modified so the tops of the seats were level with the tops of the doors. Then Manny sculpted them into the shapes he wanted, made up some templates then did his thing. Doing the stuffed pleats is very time-consuming, but it looks great. Same with the centre console, the parcel shelf and the door trims.” By the time the chassis and bodywork were almost complete, Lou had started doing contract work for Carmine at CAD Customs.

“I had seen some photos of the HQ in bare metal and it was pretty impressive,” Carmine says. “Lou was at the stage of needing filler work, which was going to be way too messy for him to do at home, so we arranged for him to bring the car into work.” After some epic late nights blocking the car back, the HQ was ready to paint, with Carmine handling the six hours of gun work. “Lou could have easily painted it himself,” Carmine says. “He’s a great tradesman, so I feel very lucky to have been able to do the job.” The TOXIC Q airbrush work on the bonnet was applied by Mat Egan, who had imposed his art on some of Lou’s choppers and now works out of CAD when he’s in Australia. So does the bite match the bark? You bet. Under the bonnet is a 468ci big-block, screwed together by Steve at S&S Engines. Lou reckons the engine should make a comfortable 700hp on E85 without leaning on it. A big mechanical bump stick gives the car an angry idle and the whole deal breathes through a set of eight billet throttlebodies. It’s a beautifully presented thing too, with plenty of black fittings and lines to match the rocker covers and neat billet caps covering the bolts. The whole deal is super-slick, but also functional and serviceable – Lou doesn’t plan to keep TOXIC Q in a glass case. The HQ debuted at Meguiar’s MotorEx (July, 2014) and was, by our reckoning, one of the most popular cars with the general public. Lou can’t wait until the car’s brief turn on the show circuit is over, so he can start to enjoy driving the thing. 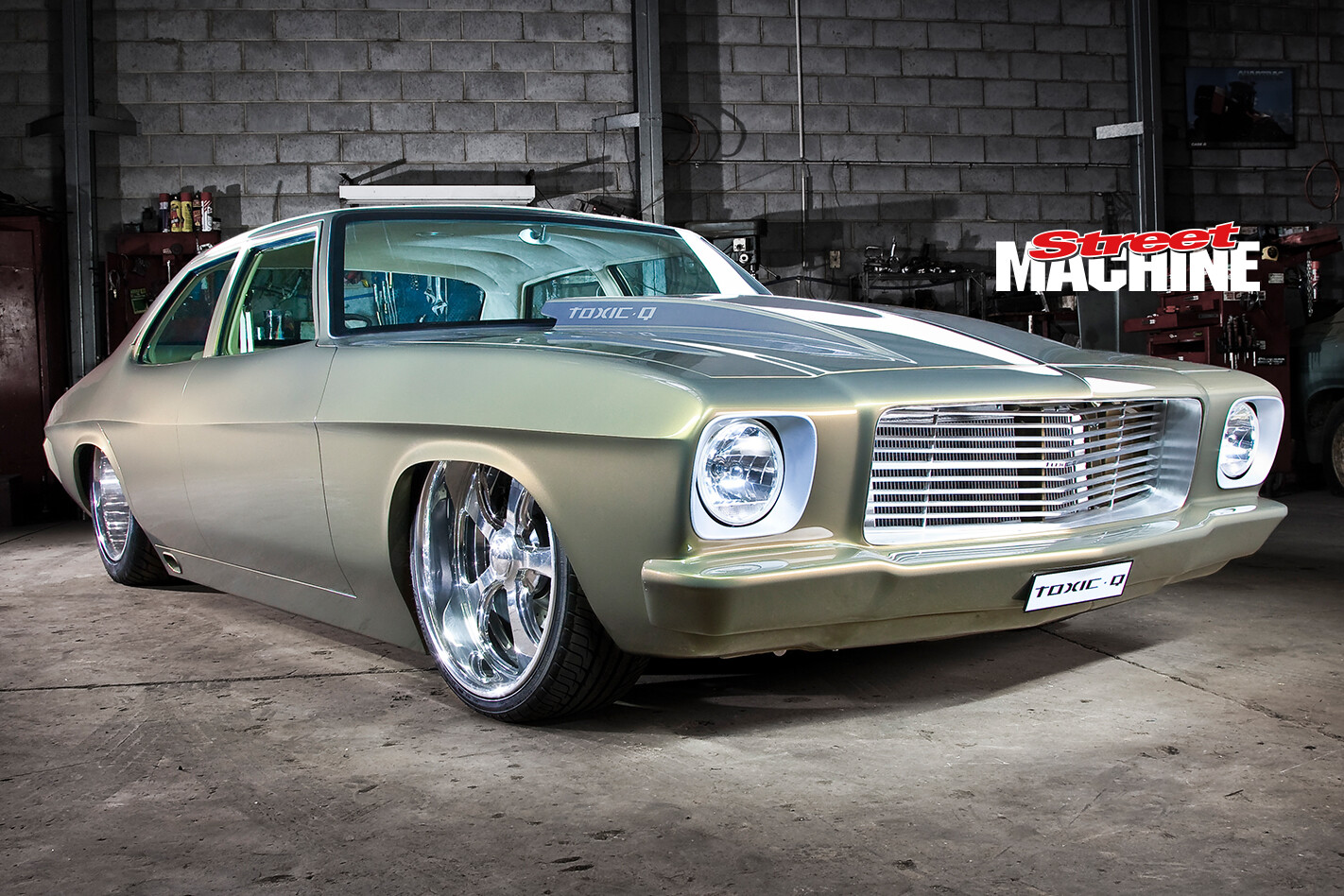 That said, we get the feeling Lou digs the build as much as he does the drive. “I like to tinker,” he admits. “There are still a few bits and pieces that I need to make to finish it off, so if I’ve got some spare time, I come in the shed, put the doof-doof on and start to make something on the lathe. Five hours later, it’s 1am!”