DAN Ulreich runs Midwest Hot Rods in Plainfield, Illinois, just off Interstate 55, the highway that closely follows the legendary Route 66. That means they get visitors from all over the world, Australia included, who drop by as part of their pilgrimage down the Mother Road. But he’s never had any of his cars featured in an Aussie magazine – until now. 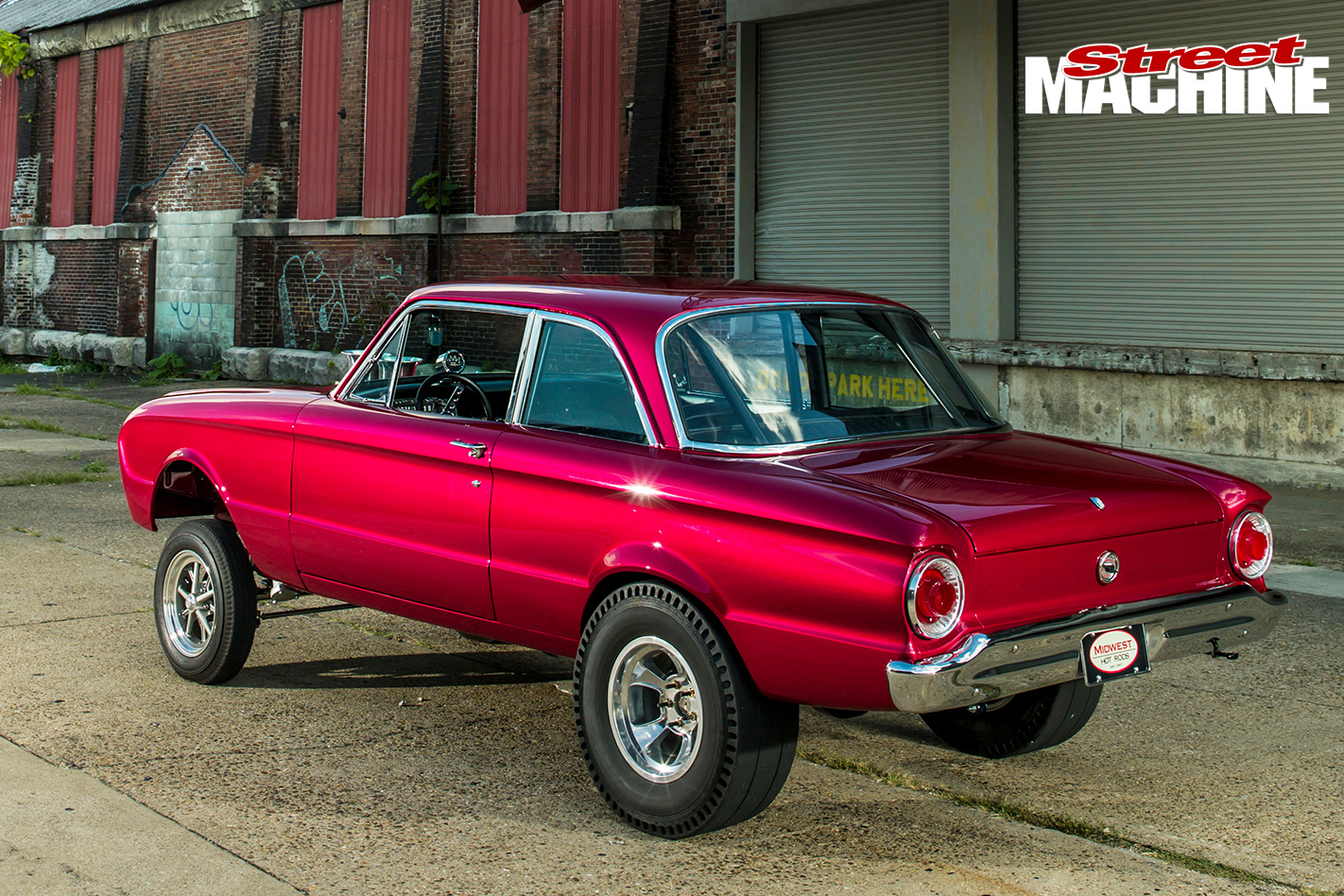 We’re all pretty familiar with Falcons here in Oz. They’ve been on showroom floors non-stop since 1960, but they sure as shit never looked anything like this one. It’s a ’62 model, which we’d call an XK, recognisable by its thin rear pillar and renowned for being too pissweak to handle the rough Aussie outback roads. 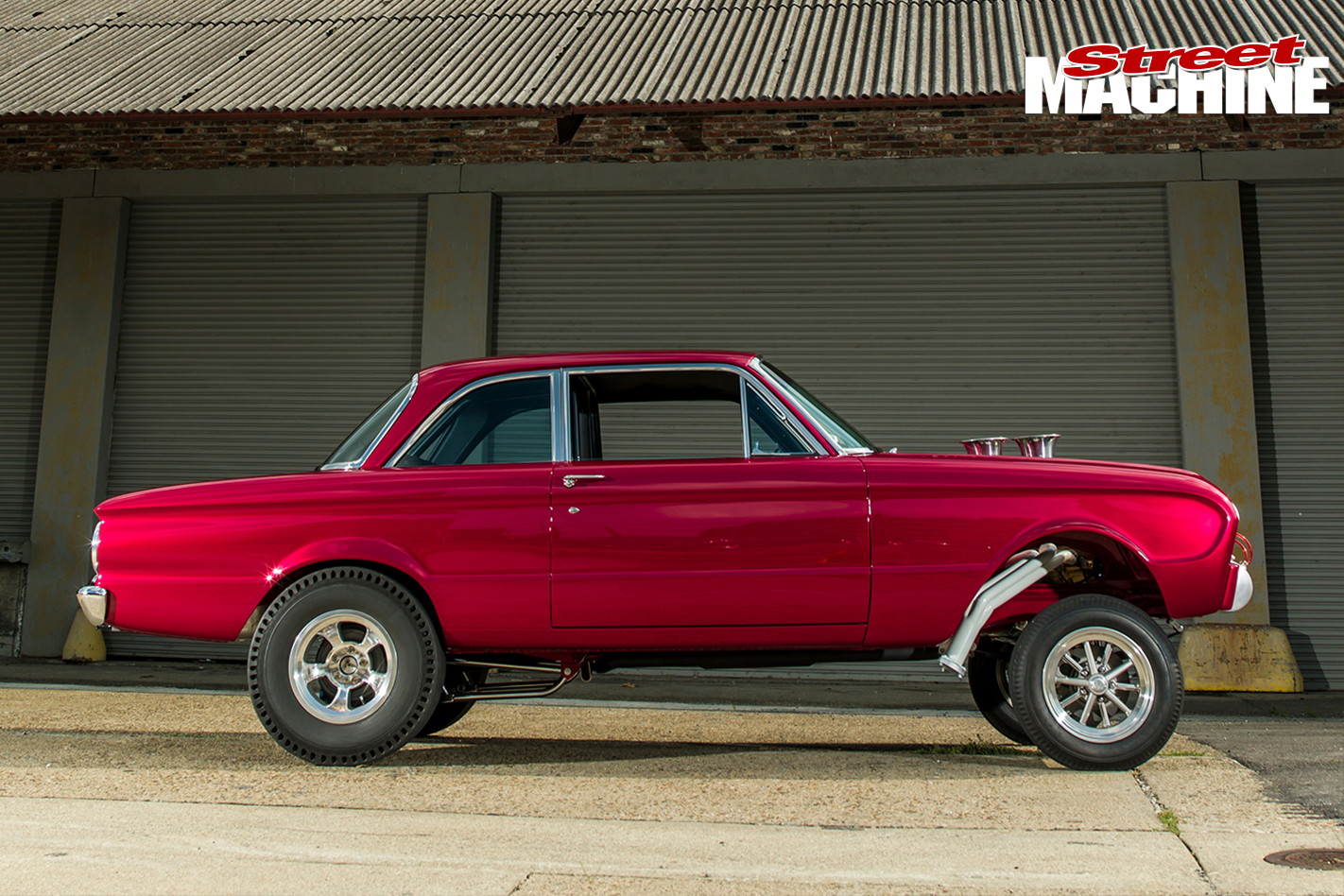 You’ve probably already picked up that this one is missing a couple of fire escapes as well, an option we sadly didn’t get. As the two-door sedan version of most models was the lightest in the catalogue, they were often sought after when it came time to build a quarter-mile racer. 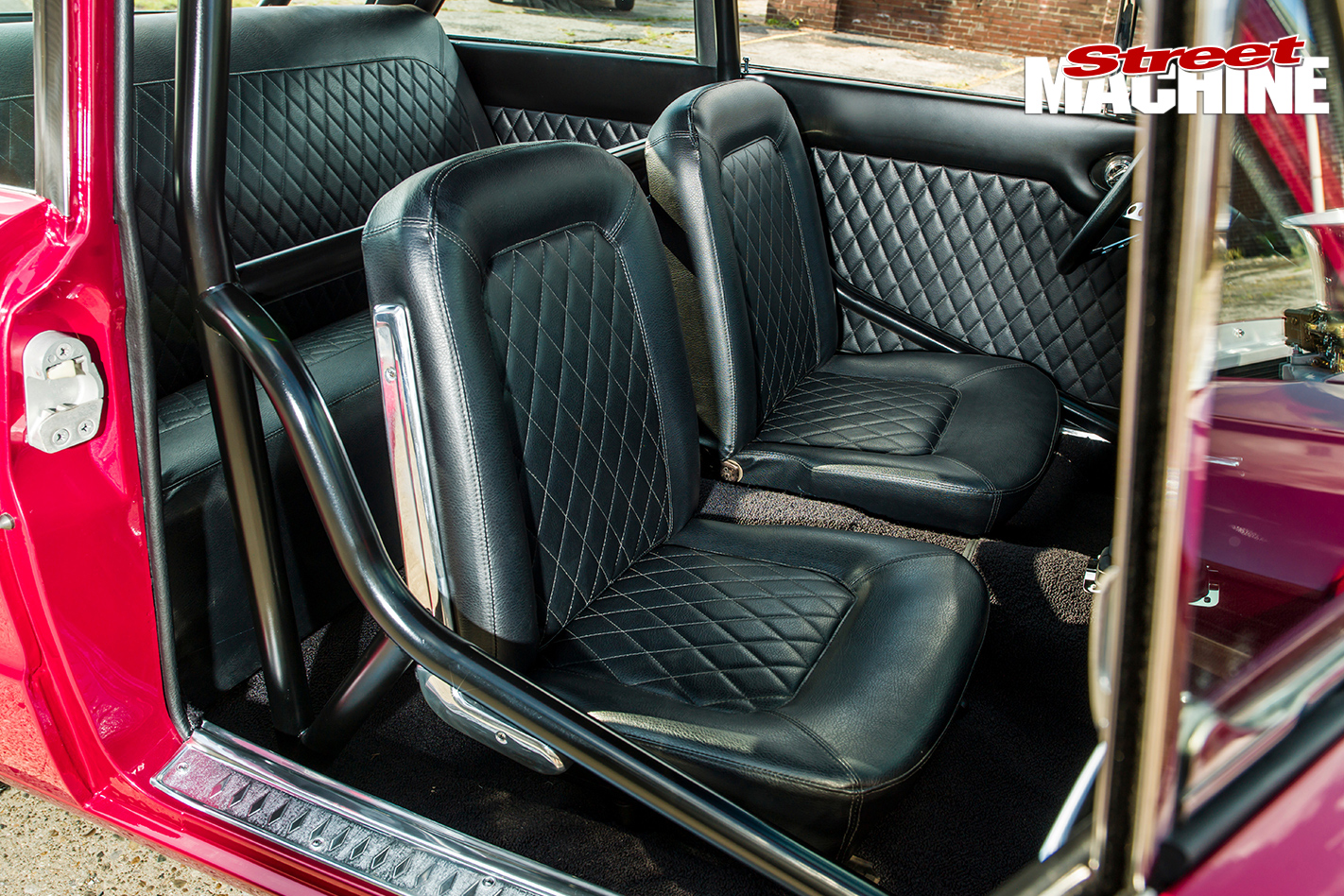 “I’ve always had a passion for gassers, but I’m too young to have seen them race at the drag strip,” Dan says. “I built this one more for the street than the strip; that’s why it’s still got the back seat and the fuel tank is in the stock location.” 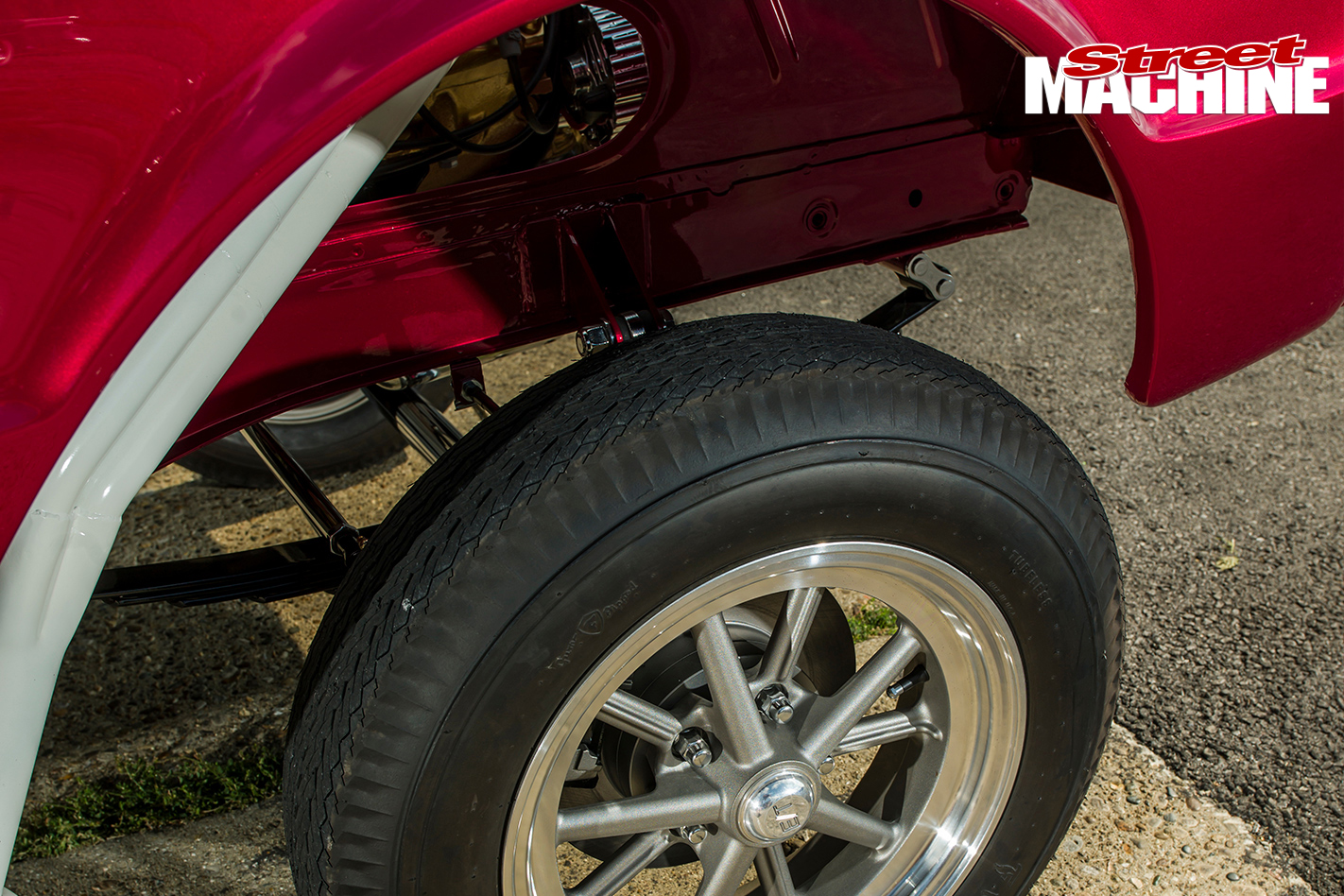 While Dan didn’t have the harshness of Australia’s outback to contend with, when looking for a donor car to start the project off he did have to think about the salt-infested winter roads around his home town and how they would have affected old local iron. That’s why he sourced a very solid example of an early bird from the much drier climes of Arizona. Needless to say, the Falcon copped a fair bit of strengthening in the form of tubular chassis connectors and a half ’cage. 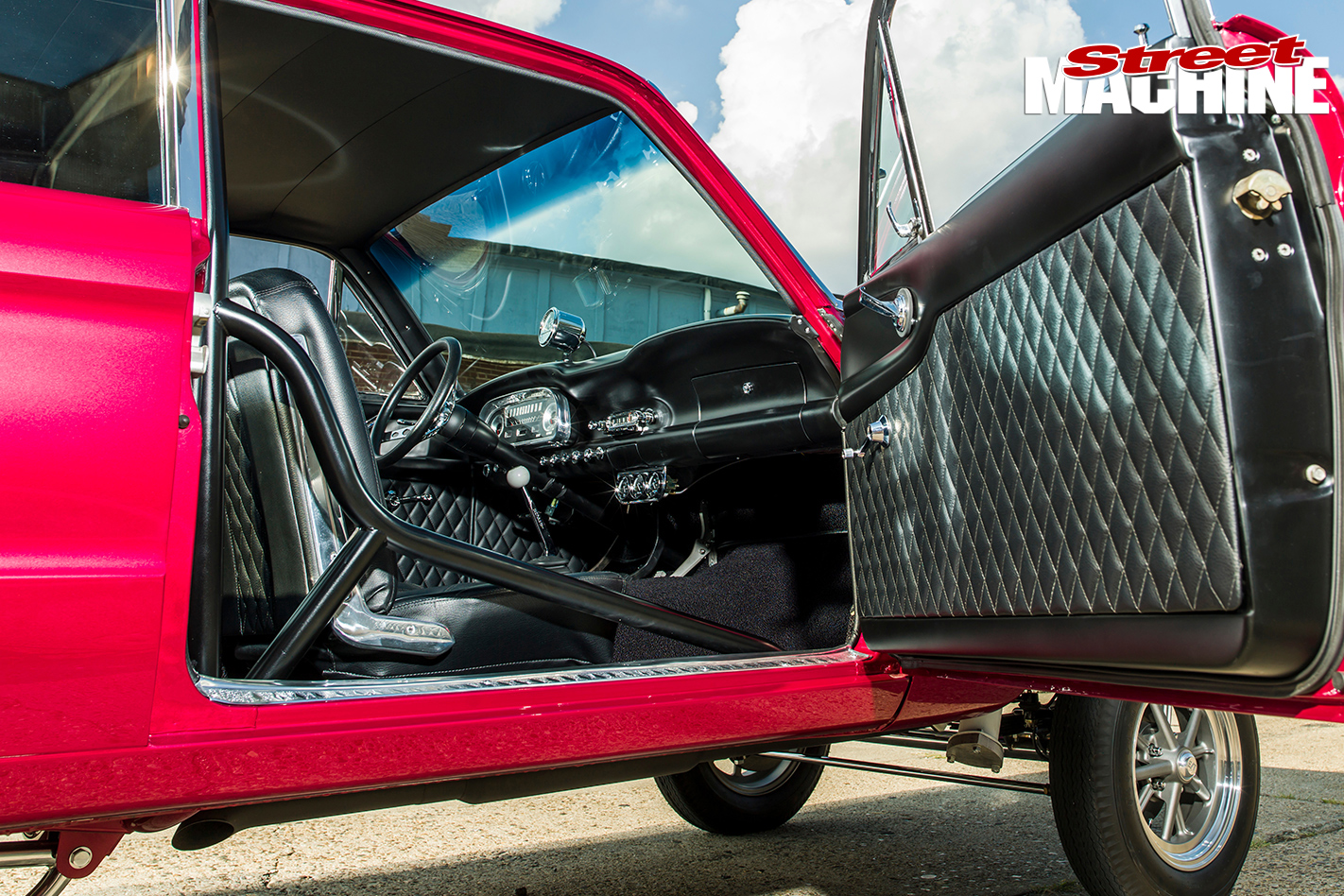 If there’s a downside to building a gasser-style car, it has to be the fact that everyone can see what you’ve done underneath – without even having to bend down. Dan’s obviously got nothing to hide though, with the entire shell painted in 2010 Corvette Crystal Red from top to bottom, inside and out. No chassis-black floorpan or satin-black engine bay for this baby, just a whole heapin’ helpin’ of two-stage paint that looks for all the world like good ol’ candy apple red – but without the drawbacks. 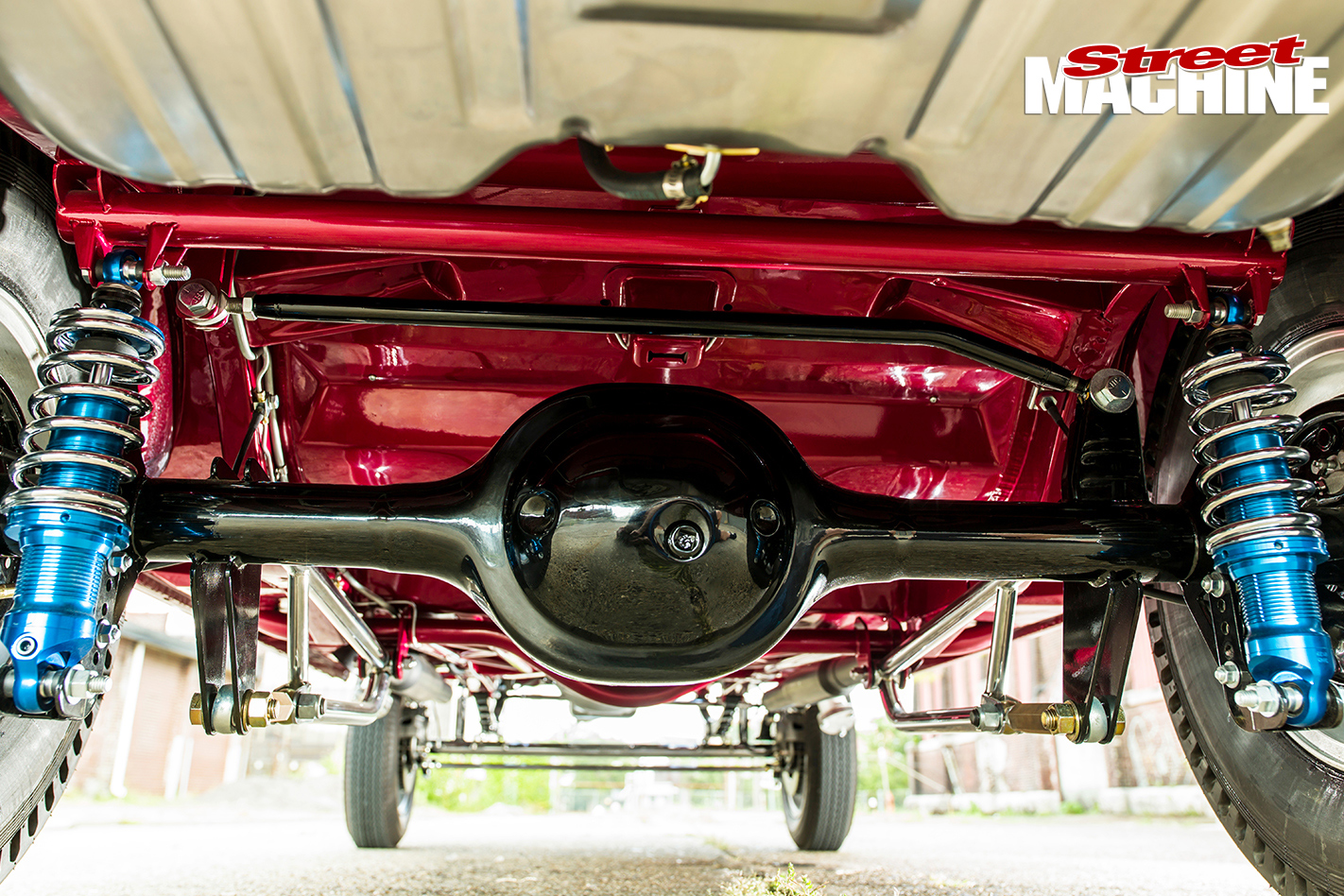 A gasser has to sit up high and mighty, and the best way to do it is with a straight axle and some parallel leaf springs. Not the best set-up for canyon-carving, but if you’re just planning to head mostly in a straight line, then it’s great. Dan picked up the whole front end as a kit from Speedway Motors. They have a few different widths available with various braking packages as options, depending on how much you want to spend and how quickly you want to stop. Out back, the eight-inch diff is held in with a set of ladder bars and Panhard bar fabricated in-house, while a pair of Afco coil-overs control the bump. 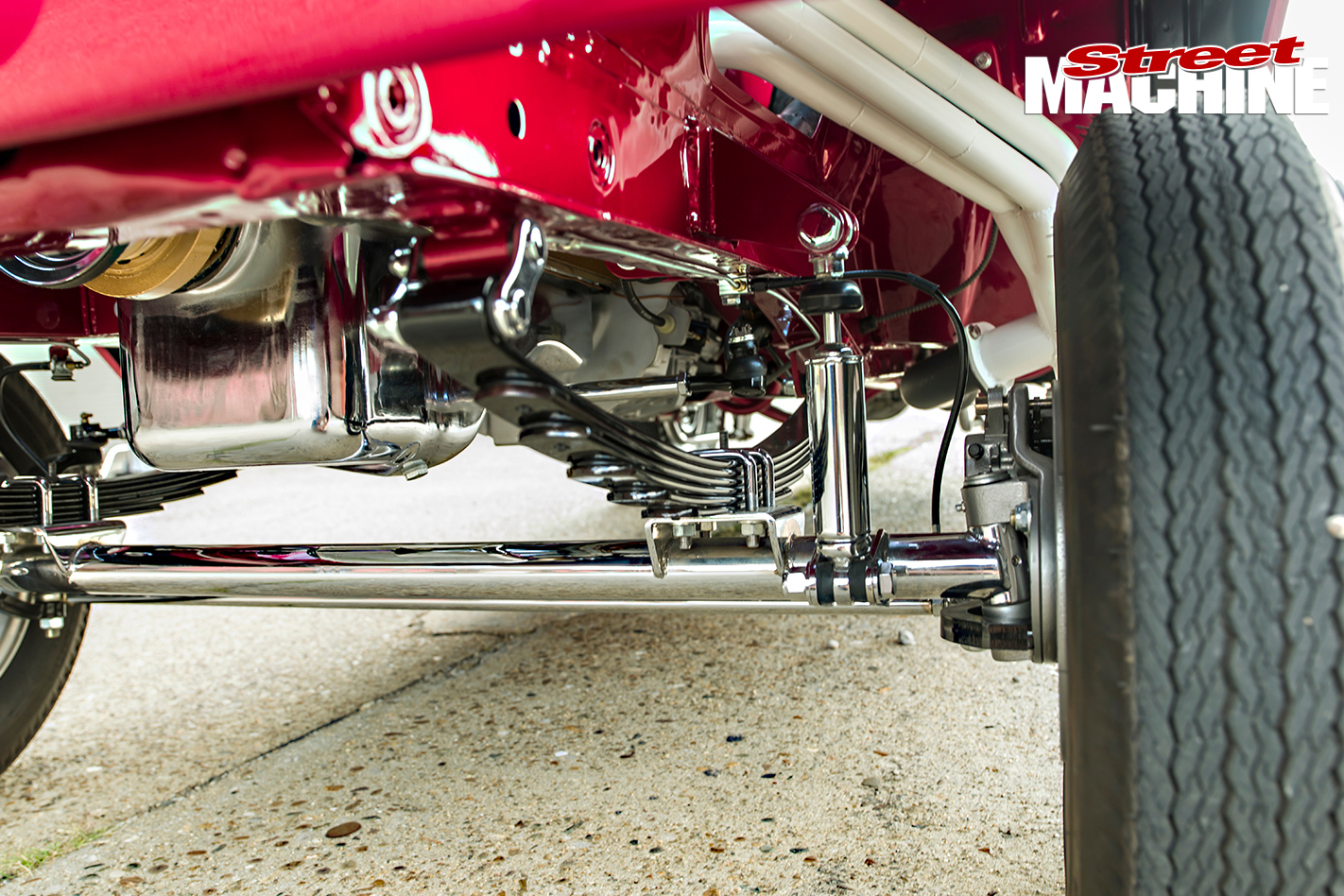 With a body as solid as this one, Dan wasn’t real keen on cutting it up too much. So you’ll notice if you look at the pictures of the boot (that’s the trunk to you, Dan) that the wheel tubs look suspiciously like they left the factory that way. That’s because they did. Dan did have to make room to fit those no-name 15x10 wheels and Towel City pie-crust cheater slicks under the back, so he cleverly grafted a set of ’71 Mustang rear wheelarches in place. A much neater and more finished look than simply radiusing the rear quarter panel. 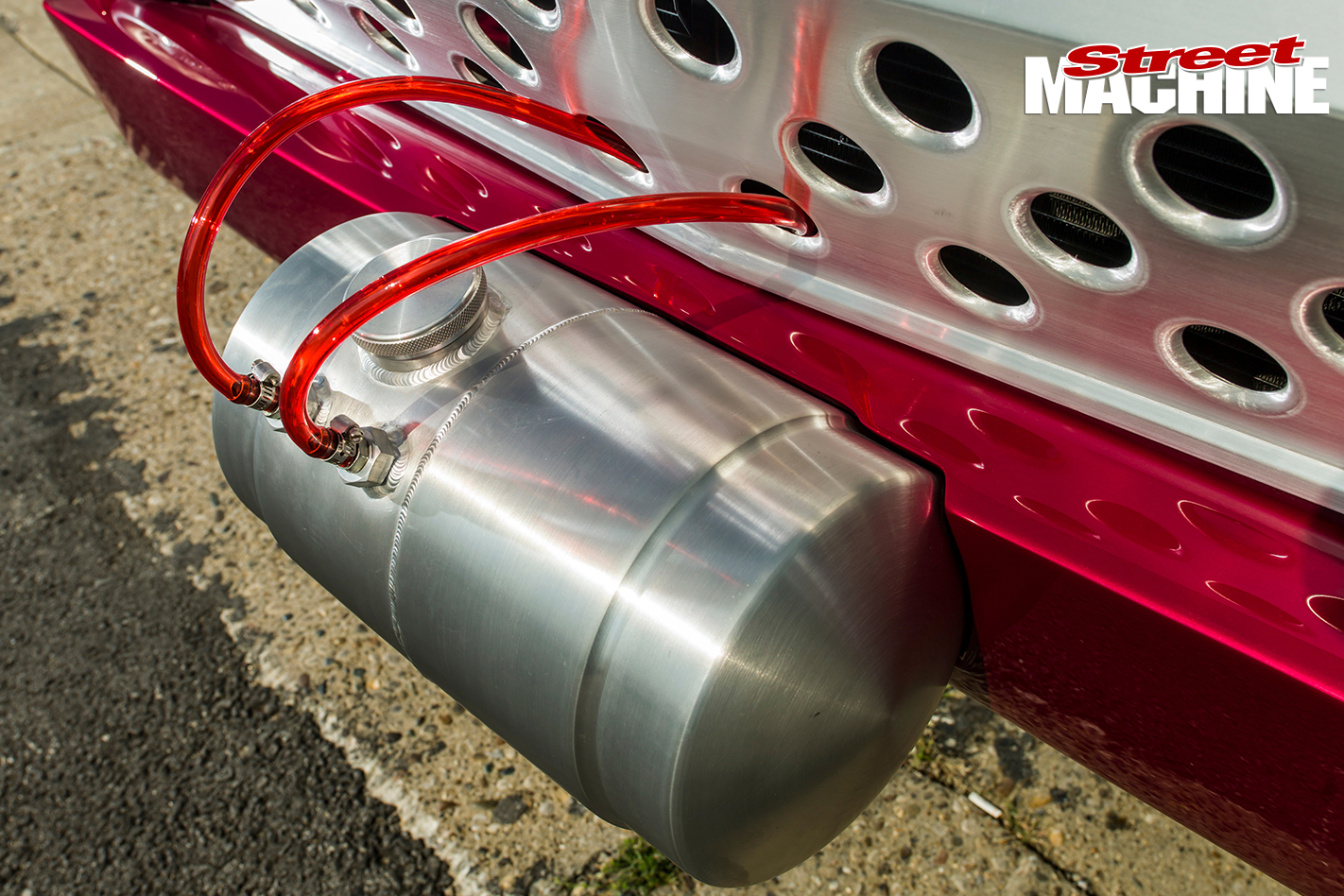 There’s a bit going on up front as well. Gassers don’t need a front bumper – the whole point of the nose-high stance is to get weight transfer to the rear wheels, and another way of doing that is to take weight away from the front. Instead, Dan made up a roll pan for the front and then recessed it to fit the Speedway tank – no, it’s not a Moon tank, it’s also out of the Speedway Motors catalogue.

You’ll notice something else is a little different at the front. That custom aluminium grille is a pretty trick bit of gear with its belled holes and tidy fit into the factory headlight doors, and lends a real aggressive look to the car. 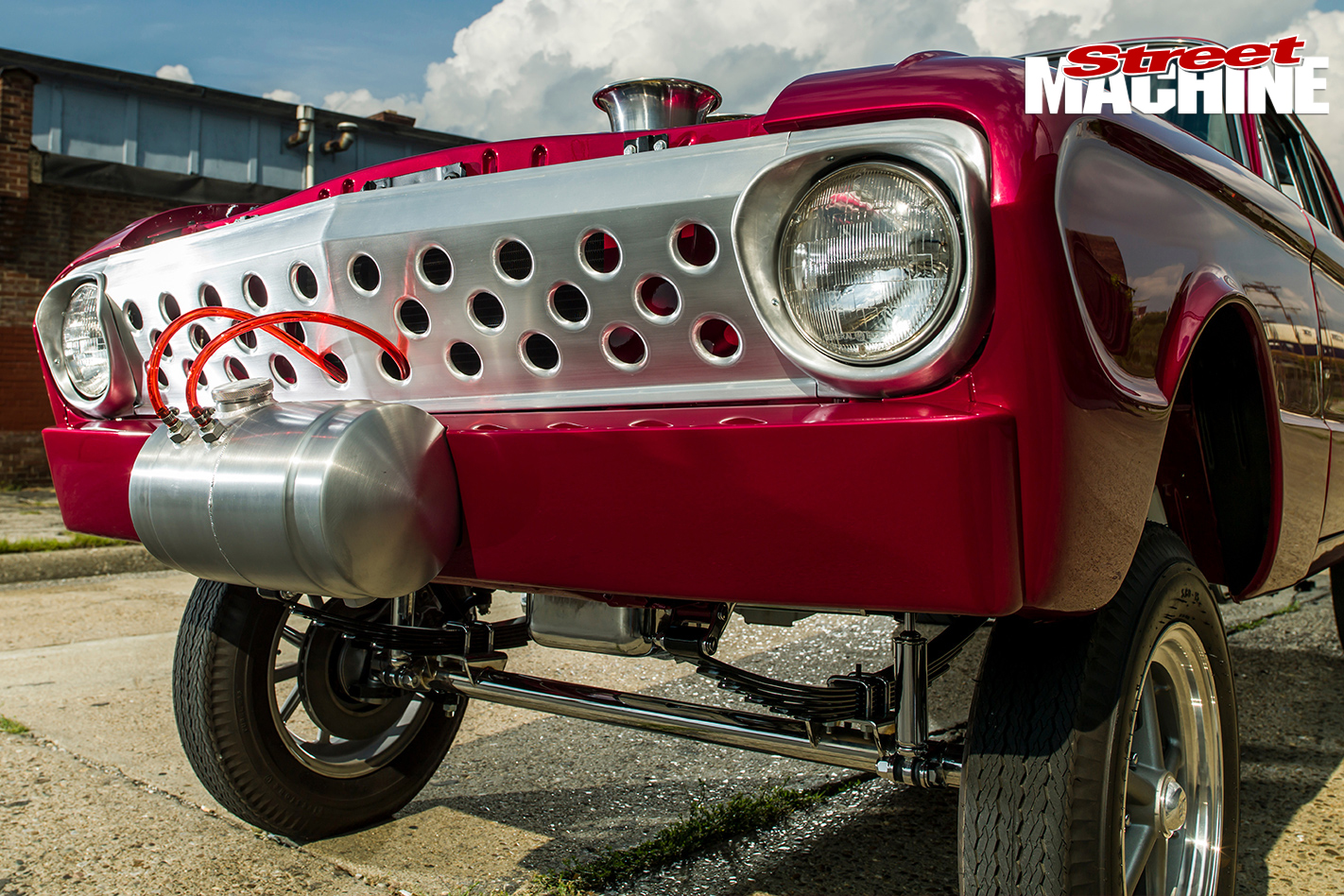 Apart from being totally devoid of any badges, the rest of the body is stock as a rock.

Even though it’s a street gasser, it’s still got to have some attitude in the engine bay or people just won’t take you seriously. To that end, Dan’s had a pretty stout little Windsor screwed together that’s not over the top, but has enough visual and aural impact to let people know it’s not some crate motor with a fancy set of rocker covers. 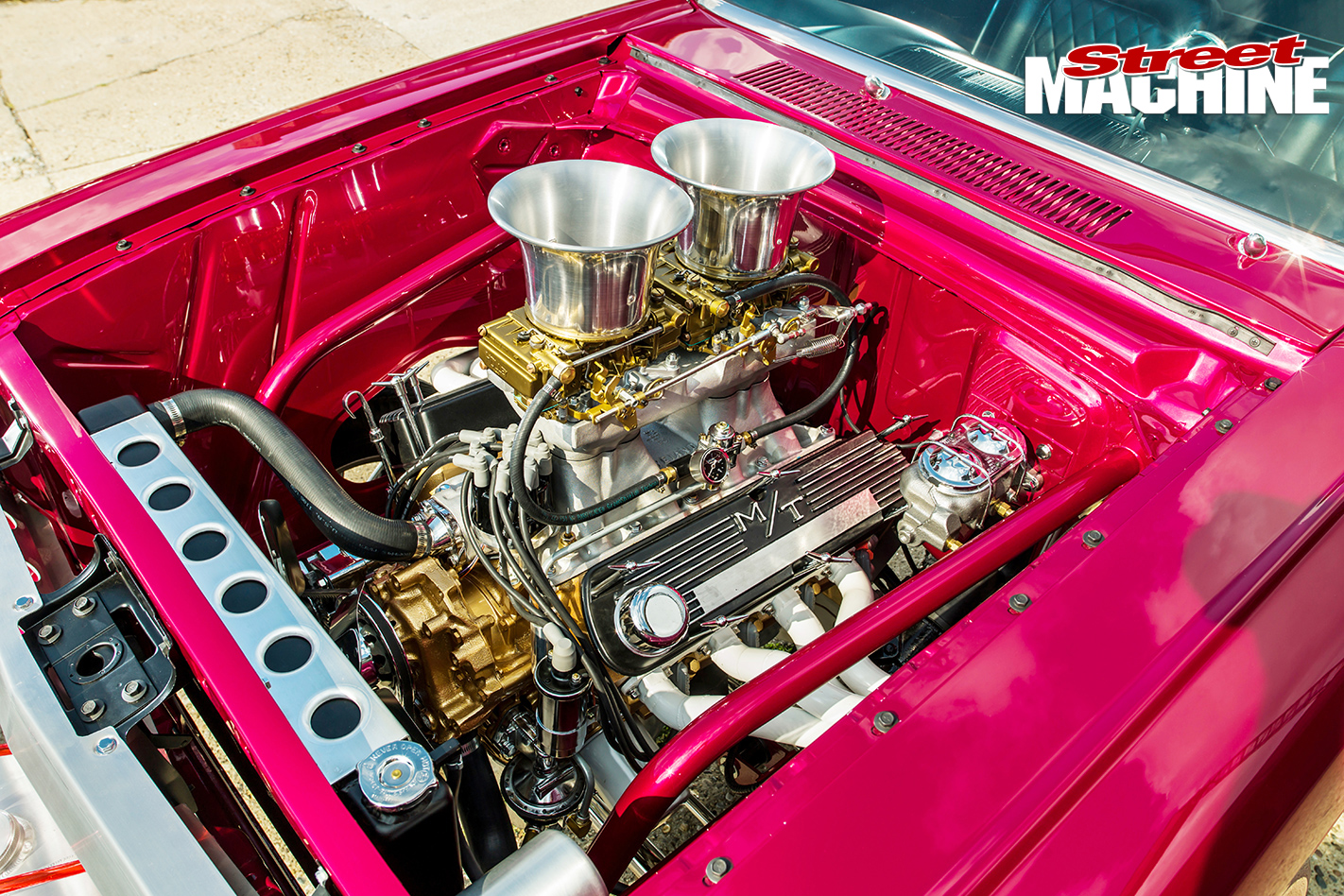 The FoMoCo 302 block has been punched out and stroked to 347 cubes, filled with forged internals and a lumpy roller cam. The visual impact comes from a Weiand tunnel ram topped with a couple of 450cfm Holleys wearing velocity stacks – and if you ever made model cars as a kid, you know they are the coolest option for this style of build. If you’re wondering about that gold paint on the engine: “I painted it that colour to match the gold leaf we used on the sign board,” Dan says. 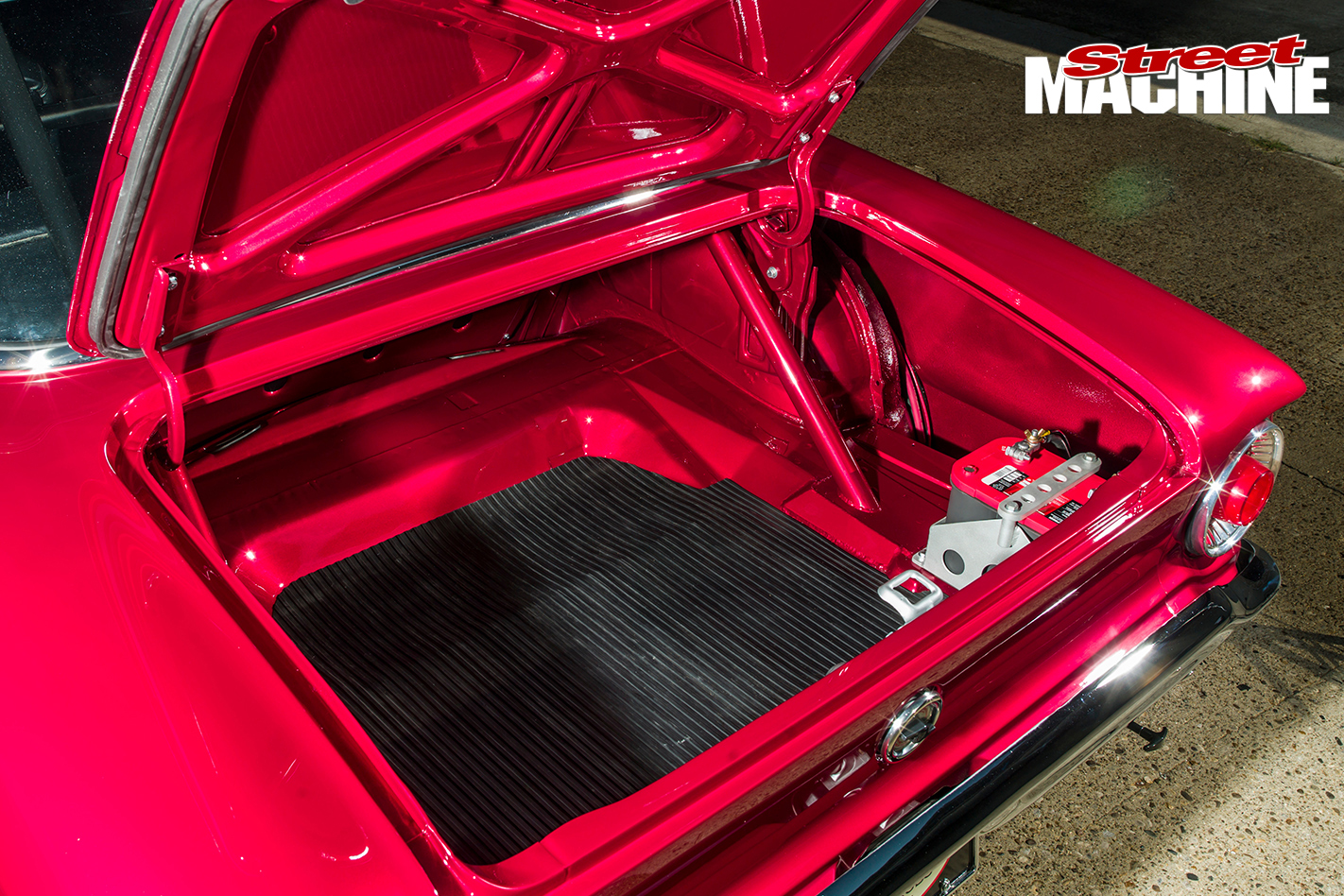 The car has a name – Hell Raiser – but Dan hasn’t rushed into getting the car lettered up yet. For a start, he’s happy with how it looks right now, and the car definitely gets plenty of attention. “I might put some signwriting on it in a year or so, just to change it up a little.” 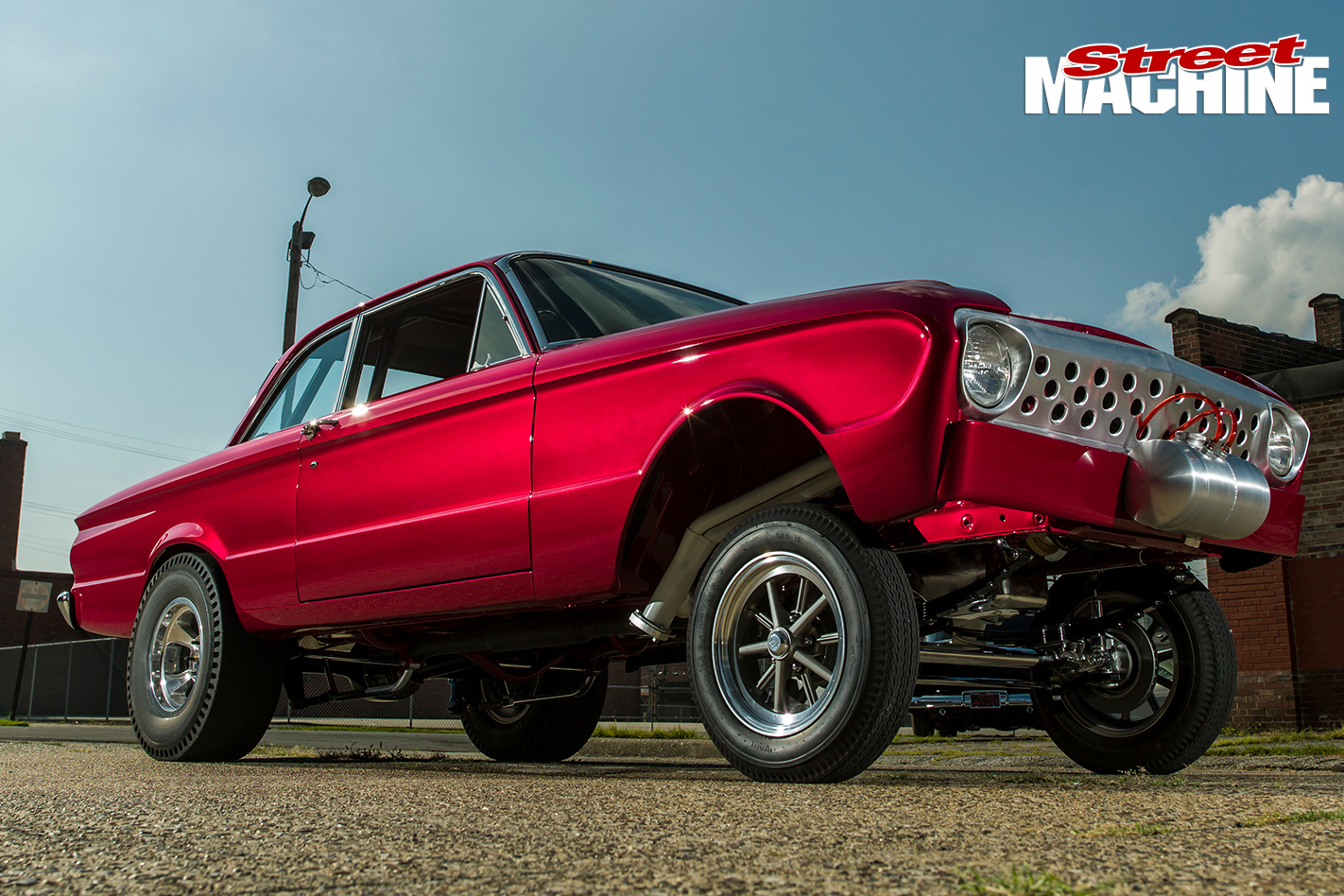 Whether it gets all the speed shop stickers, numbers and gold leaf or not, it’s a really cool tribute to the simpler times of drag racing, and something you can quite easily replicate here in Oz. How long you’d last on the street before the coppers nabbed you is another story, but it sure would be fun while it lasted!