CANBERRAN Terry Keys is no stranger to the modified car scene. His VK Commodore has taken home plenty of trophies since he started competing seven years ago. The 29-year-old’s mantelpiece is chock-full of accolades, including a spot in the Elite Top Five at Revfest, top gongs for audio sound quality three years running at the South Coast Nats, and Best VK-VL at the All Holden Day.

But Terry’s always held the belief that building cars should be fun, not all-consuming: “I didn’t want the car to rule my life. People get too wrapped up in their cars; I’ve got a life outside of the car scene.”

This attitude makes the unveiling of his VK at Summernats 23 — the result of a thorough two-year rebuild — even more amazing. 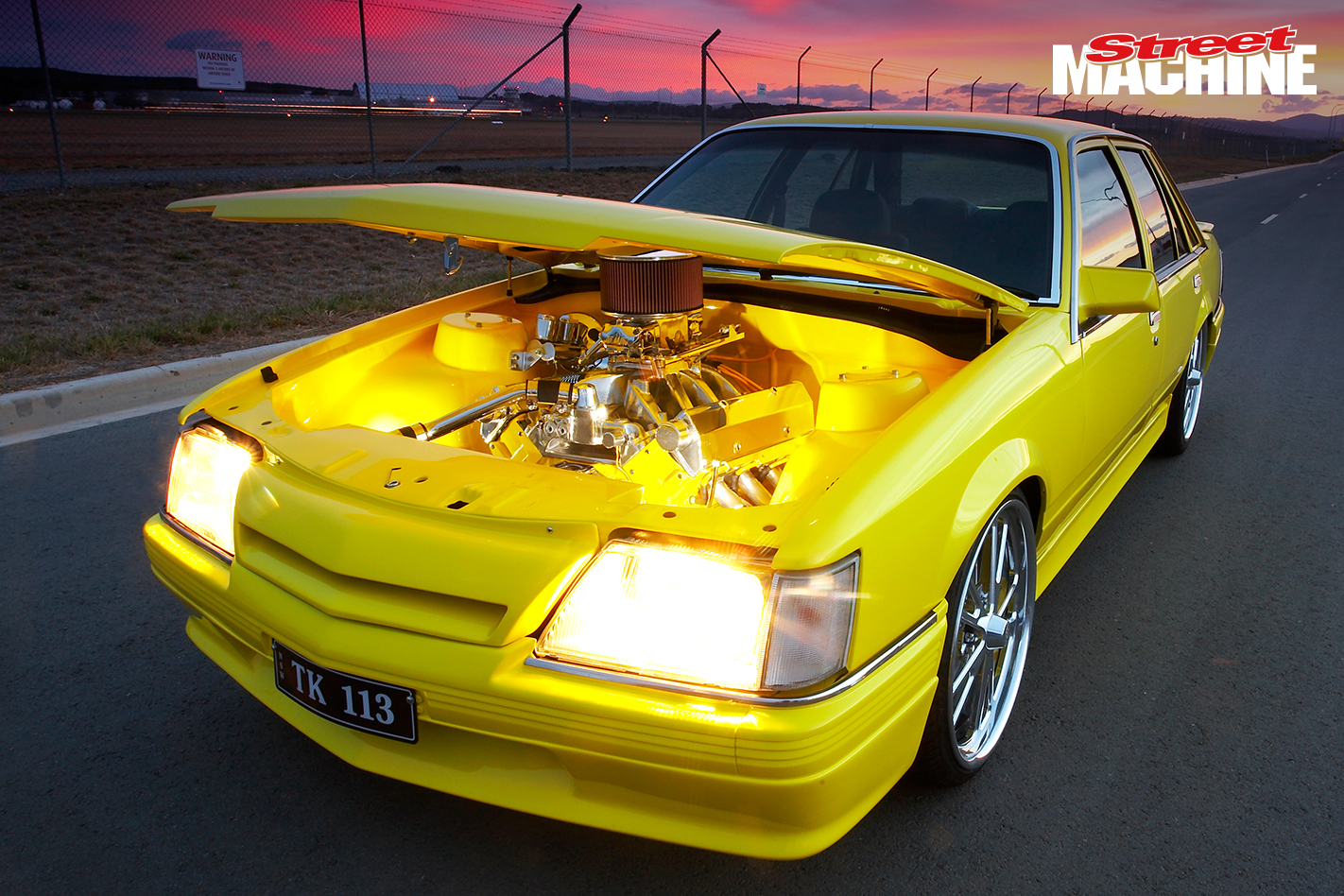 “Having the car unveiled at Summernats 23 was one of the best things to happen to me in the car scene. The atmosphere in the crowd was really good.”

Of the 13 cars unveiled, Terry’s sedan was probably the most affordable, with a budget less than the cost of a new HSV. That’s incredible when you consider some cars parked around it would have cost five times as much.

“I could have finished the VK in a year but I didn’t want it to be the be all and end all,” the windscreen fitter by trade says. “When I had the money, I worked on it. When I couldn’t afford to do anything, it just sat there.” 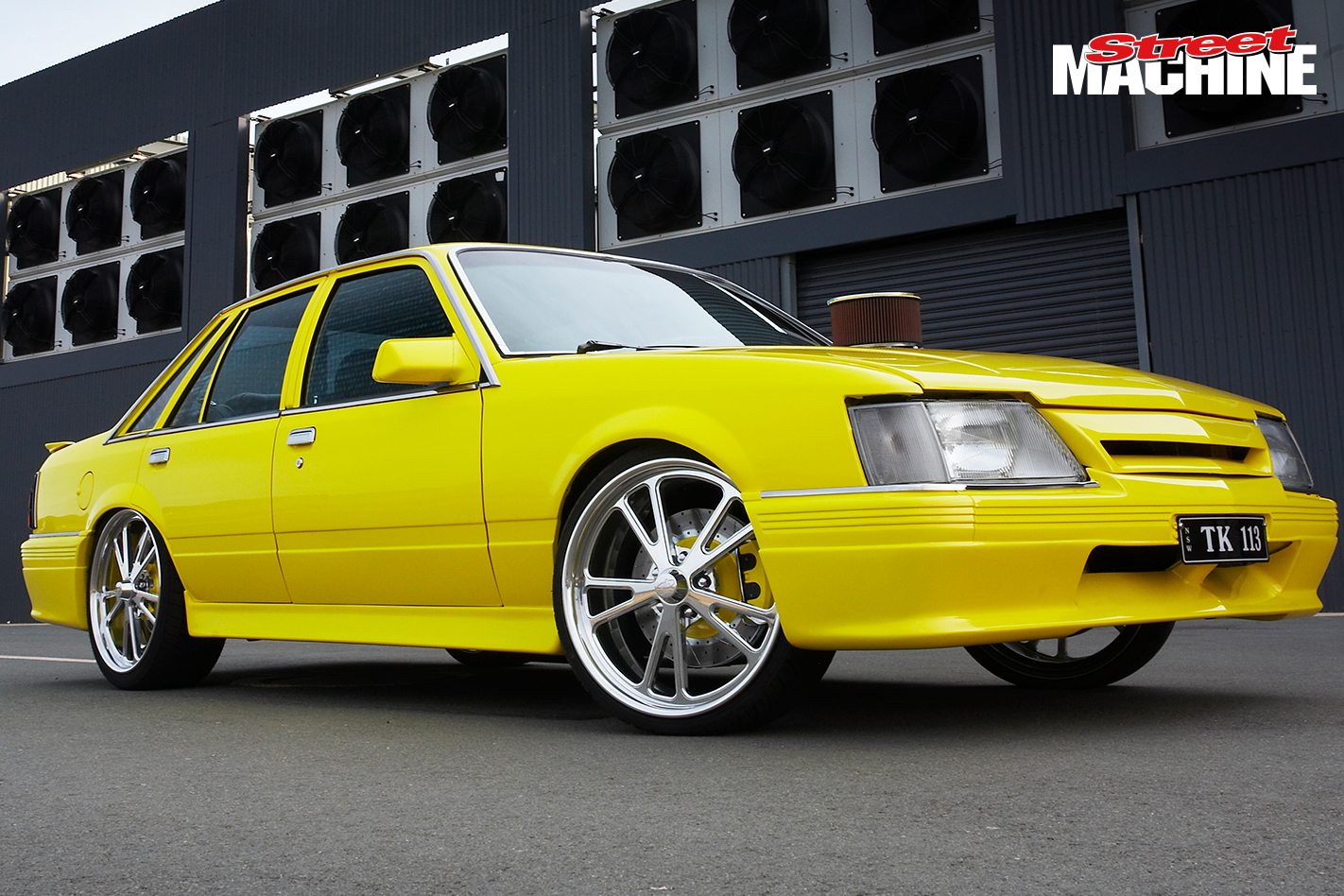 What Terry achieved was a minimalist hot rod theme that can be felt throughout the build, from the buttery smooth engine bay that looks like it’s pressed from a single sheet of steel to the 20x9 Retro rims and all the intricate detail in between. And in a scene where two-tone paint has been dominant, Terry dared to use a bold solid hue. As he says: “Less is more.”

Going your own way can be hard. “I wanted to make the engine bay look unlike any other Commodore engine bay,” he says, “but that’s hard given that everyone’s already done everything there is to do.”

He still gave it good go. After being messed around by another fabricator, Terry enlisted Chris Rourke to take care of finishing the bodywork, spending a finger-bruising 200 hours in the engine bay alone. 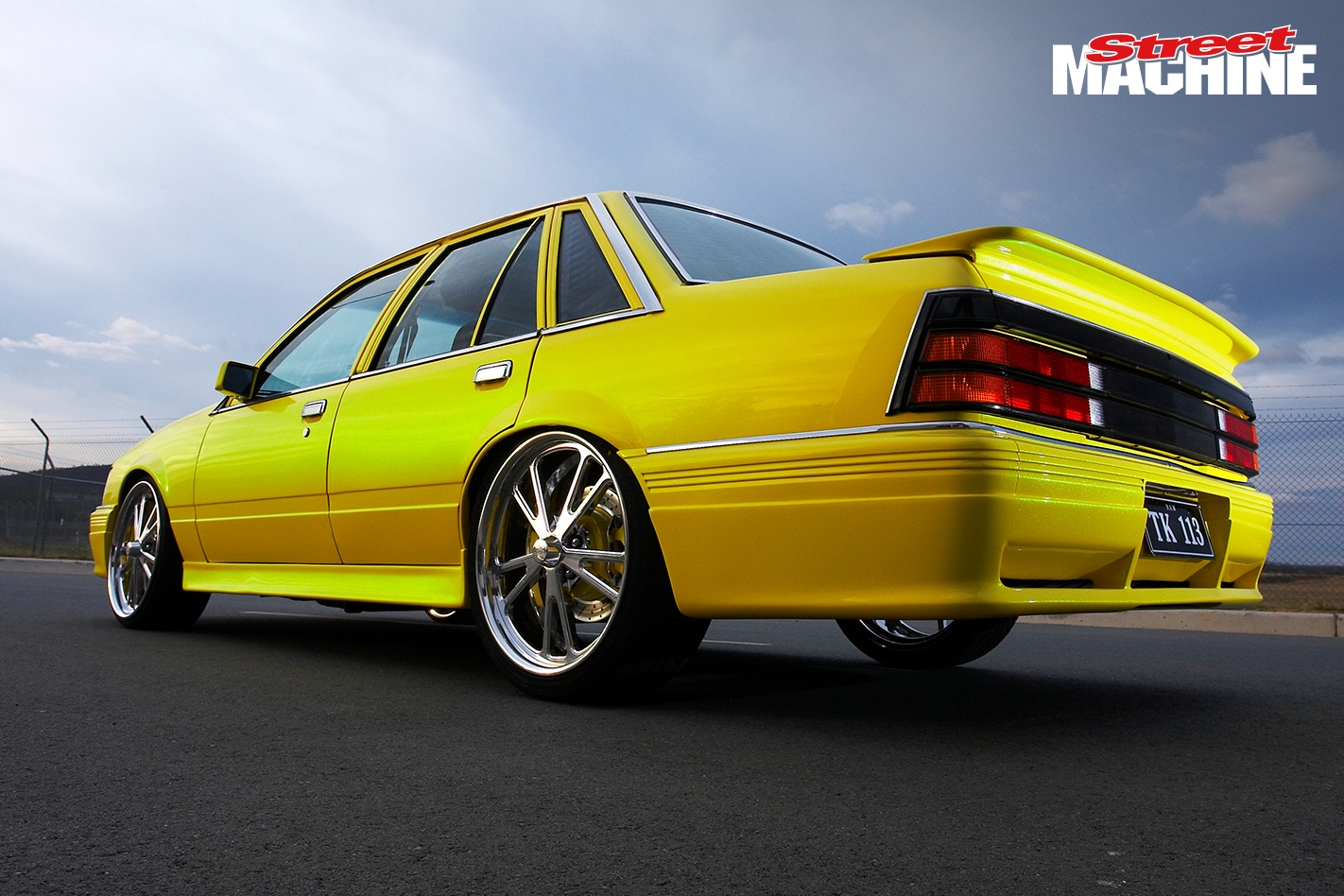 “I gave my car to a guy who promised me the world for six months. When I got the car back I had to redo 85 per cent of it. Most of the fabrication work was complete, but that was only 10 per cent of the job. Chris really saved my arse. It would have saved me $4500 if I’d have taken it to him the first time.”

Chris removed every crease, bump, hole and join, leaving little more than the strut bolts where once there were more than 10 panels joined by messy welds and mass-production compromises. Even the front guards were welded in so they could shave the bolts off. 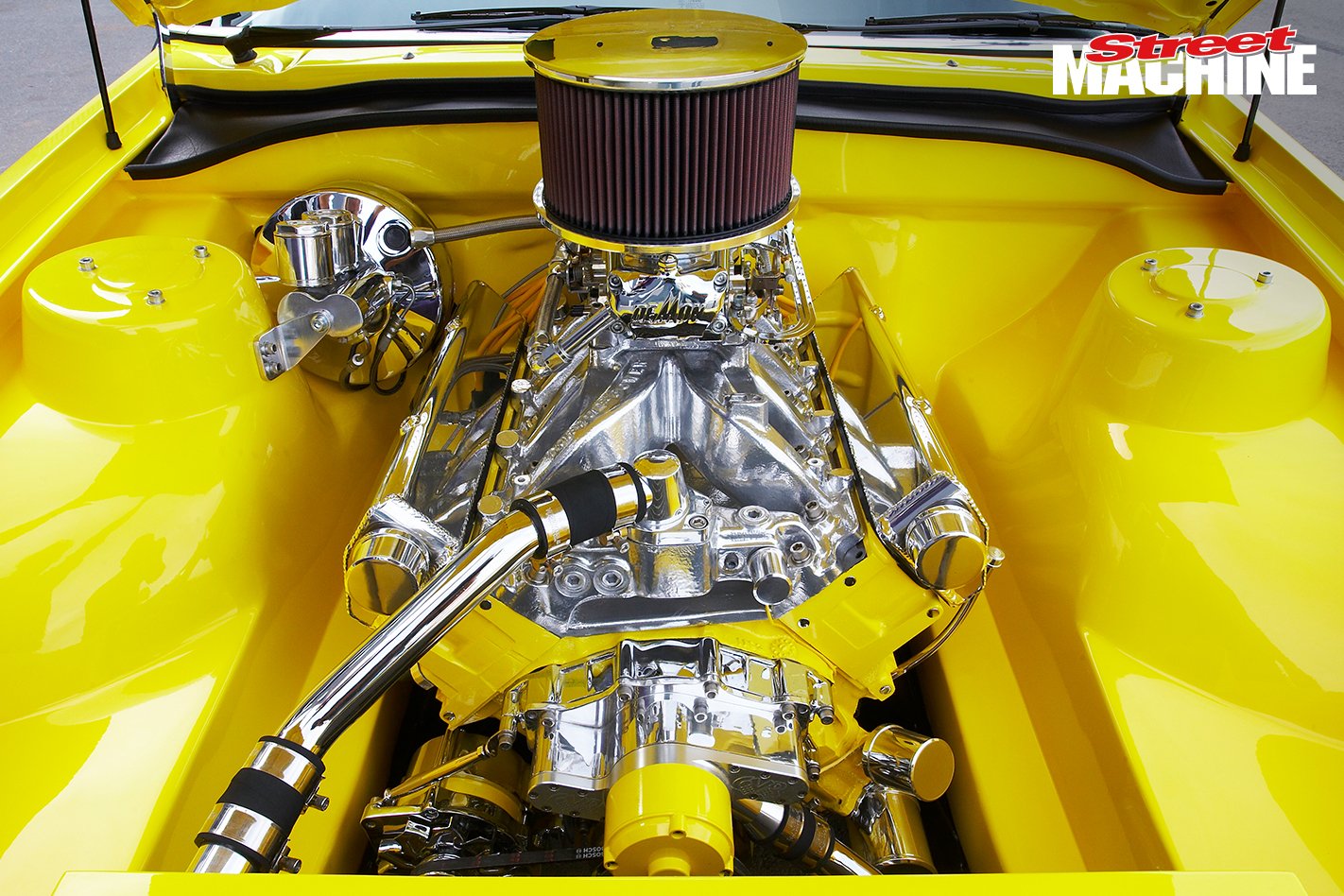 “I wanted to put stuff on the car that you couldn’t just buy. Anyone can walk into an auto parts store and ask for a catalogue,” Terry says. “In my mind, that was what was going to set the car apart from the others. There’s stuff in this car that $250,000 cars don’t have.”

That’s stuff like $5000 worth of custom billet pieces that share the same design motif, and fully welded and smoothed door jambs.

There was one area where Terry knew he’d get what he wanted — his mate Gav at Gas Auto Trim was responsible for the immaculate tan interior that graced the VK’s previous incarnation and got the nod to do it all again. 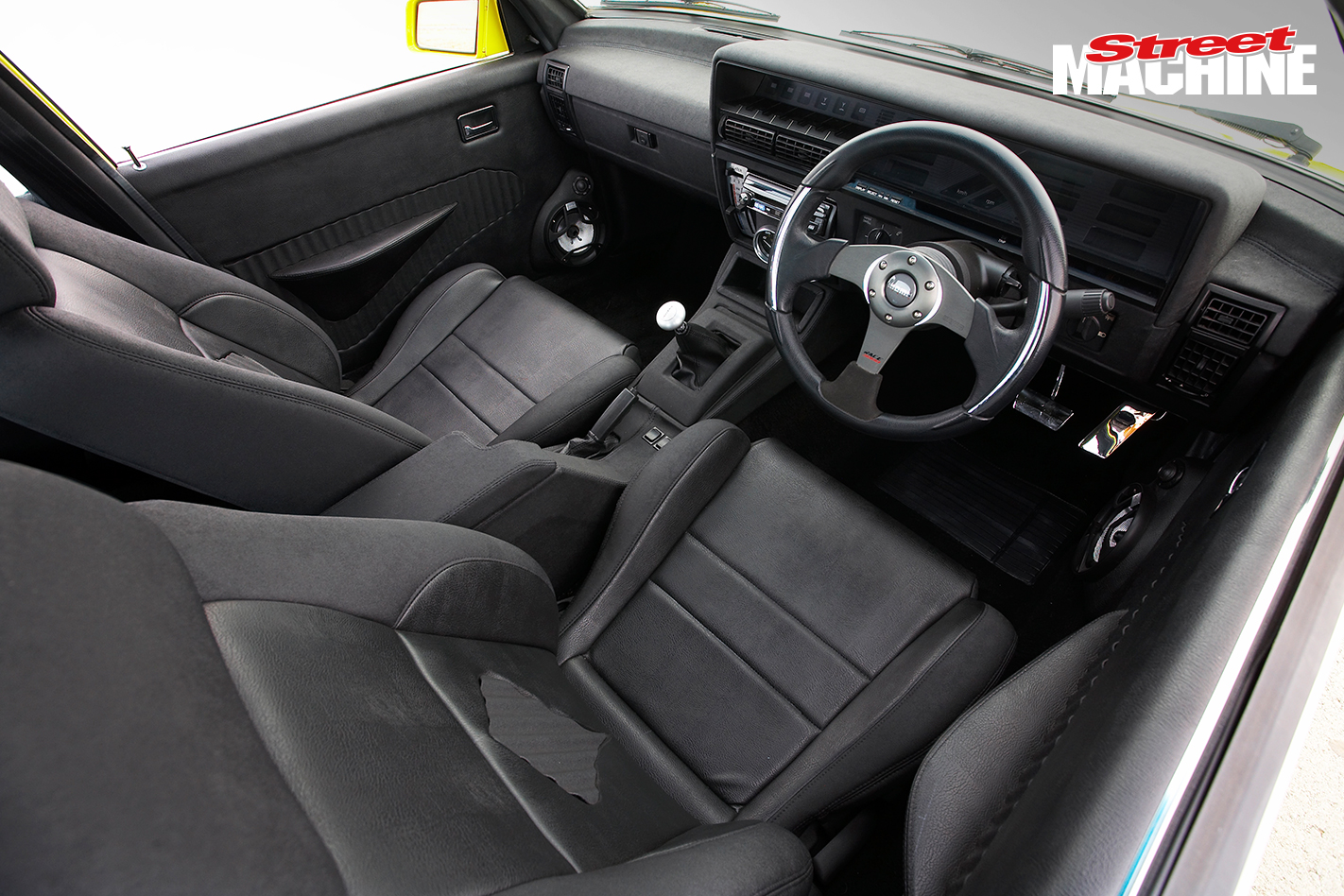 Not wanting to get into a shouting match with the loud exterior, Terry went for a classic black cabin, using leather and suede to re-cover every surface, including the Nissan Bluebird buckets that were modified to fit. The black extends into the boot, where twin 15in Clarion subwoofers share space with a Rockford Fosgate power amp in a clean, symmetrical install.

The VK is no mere show pony, though. Nestled between the chassis rails is the hot 355ci Holden stroker from the previous build. That features a Scat crank and rods, VN EFI heads, a Wade solid cam, Torque Power single-plane manifold and 850 Mighty Demon. Making 383rwhp, the combo has tons of grunt for cruising or respectable ETs, should Terry try his hand on the quarter. If that weren’t enough, the lot has been painted, ceramic coated and chromed to offer the best of show and go. 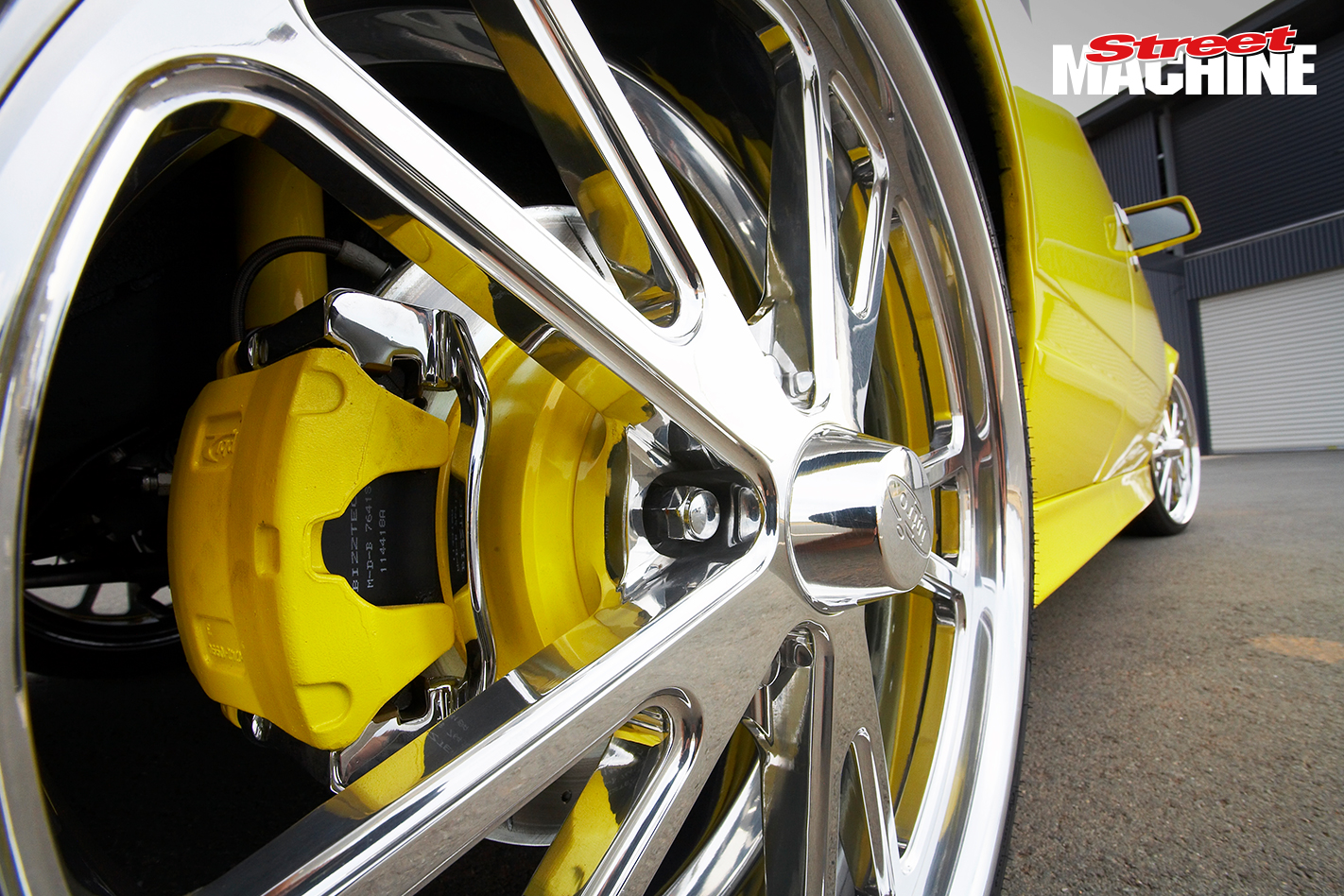 Despite the levels of customisation and craftsmanship on display, Terry says the car is road registered and legal, save for the filter out of the bonnet. “I’d never build a car that I couldn’t register. It’d be nothing more than a paperweight otherwise.”

Indeed, with only a relatively short show life lying ahead for the VK, including a spot in the main hall at Sydney’s MotorEx in July, Terry is itching to get out and drive. The car was built to enjoy, not to look at, and that’s been a rewarding experience.

“Apart from the paint and trim, I had a hand in everything,” he says. “That included paint prep, helping with the trim and a lot of the installation.”