SYDNEY’S Younis family are no strangers to the pages of Street Machine. Tony, the patriarch, grew up on a steady diet of quick street Toranas, and his infamous wheelstanding Anglia has made several appearances in the mag and copped a full feature in Street Machine Hot Rod.

Tony’s eldest son Louis followed in his footsteps and has a number of Torries in his keeping, including a Summernats Top 60 blown, tubbed and ’caged six-pot LC (SM, April, 2012); a nitrous-sniffing small-block LJ that should run deep into the eights once completed; and a genuine survivor LJ four-door which serves as a family cruiser. 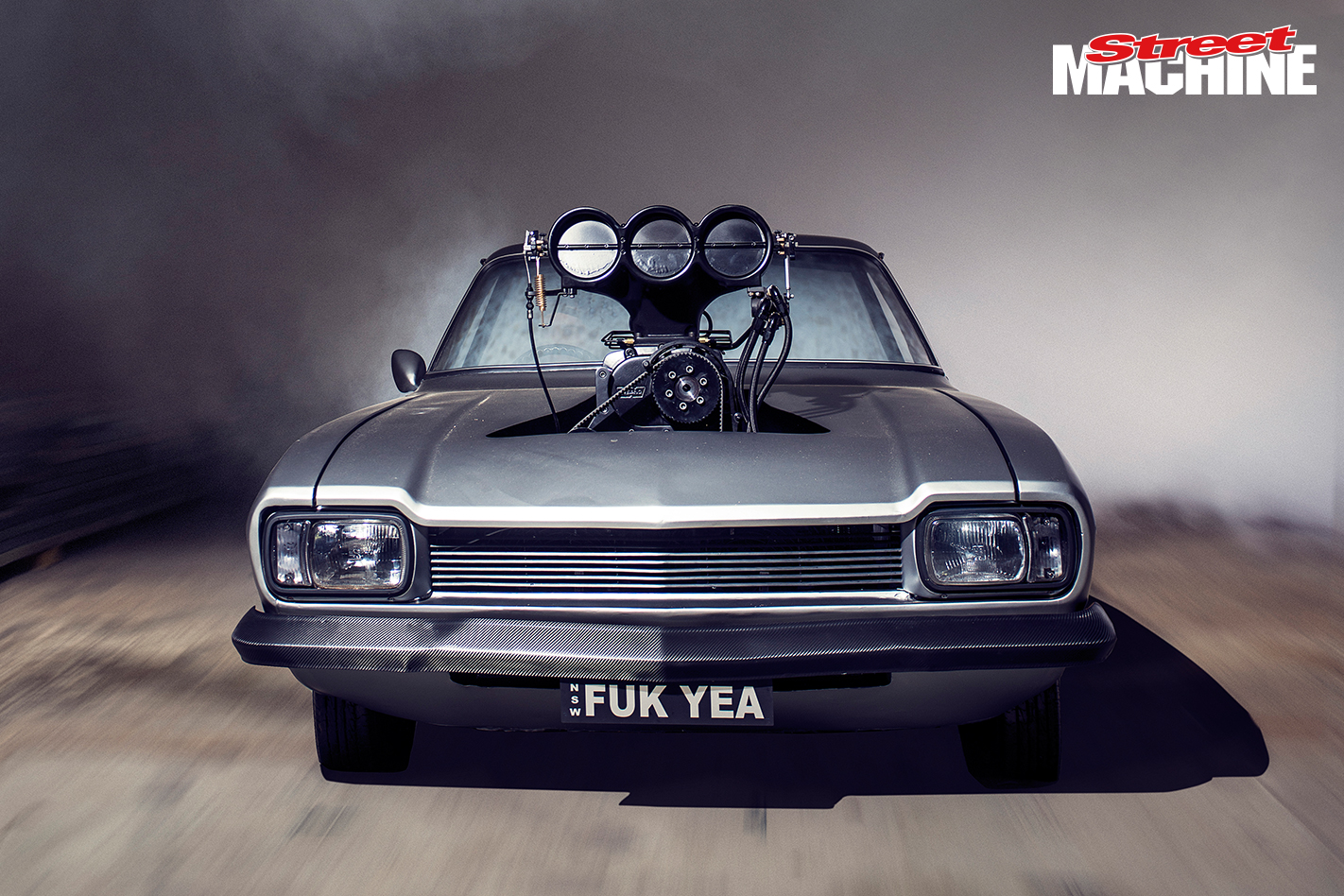 And then there’s Danny, who chose to take the road less travelled and forget about Toranas altogether. Instead, he built himself a Capri. “I’ve always loved Capris and I didn’t know anyone that had one, so I thought I’d be different,” Danny says of his tyre-melting monster. “Cars are definitely in the blood, though. Dad and Louis have both had heaps of cars and all my mates are right into it, too. It’s awesome.” 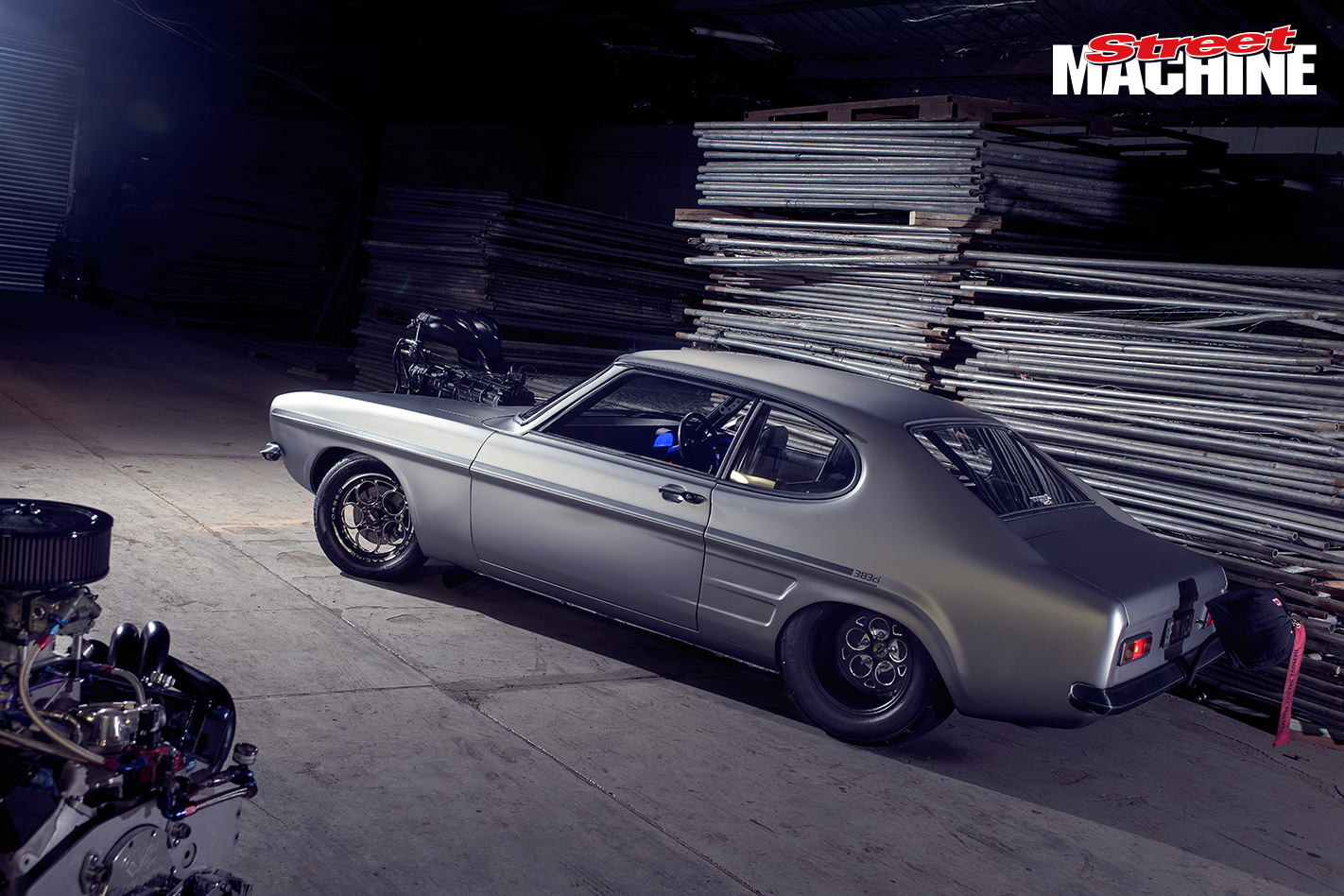 After getting off his P's, Danny ripped out the six and threw in the 383 Chev from his dad's Anglia

At 22 years of age Danny is still a young fella, but he’s had the Capri since he was just 15, and in those seven years it’s been through a number of incarnations. The first build saw the car transition from a stock-standard four-cylinder into a V6-powered streeter with a fresh orange paint job, rolling on a set of Simmonses. Shortly thereafter, though, the Simmons rims were sold off to bankroll a nine-inch conversion, replaced by a set of Weld Pro Stars. The V6 was treated to a rebuild and the car ended up running a 13.8-second pass at Sydney Dragway – not bad for a P-plate-legal ride. But as soon as Danny got off his Ps, the real fun began. 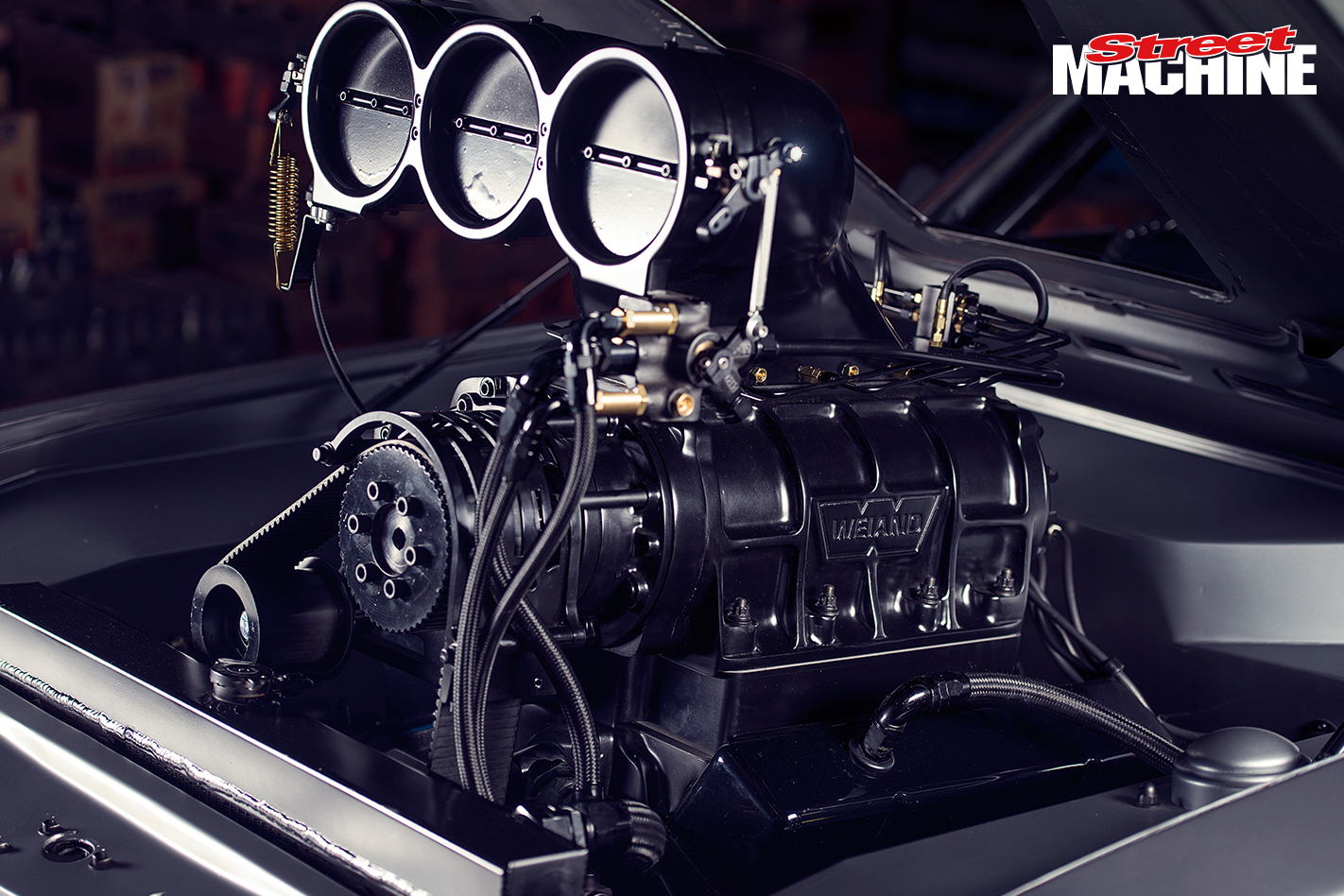 “That meant I could legally drive a V8, so I pulled the V6 out, mini-tubbed and ’caged the car and fitted the 620hp tunnel-rammed 383ci small-block Chev out of Dad’s Anglia.”

A tough street car by anyone’s measure, the Capri was driven anywhere, anytime, flogged to within an inch of its life at events and cruised relentlessly. But it only lasted so long before that pesky horsepower bug bit again.

“The more events I went to like Powercruise, the more I realised that the biggest cars are blown and injected. My old man’s Anglia and my mate Adam’s Datto were both blown and injected too, and I decided that was the ultimate set-up, which is what started this latest build.” 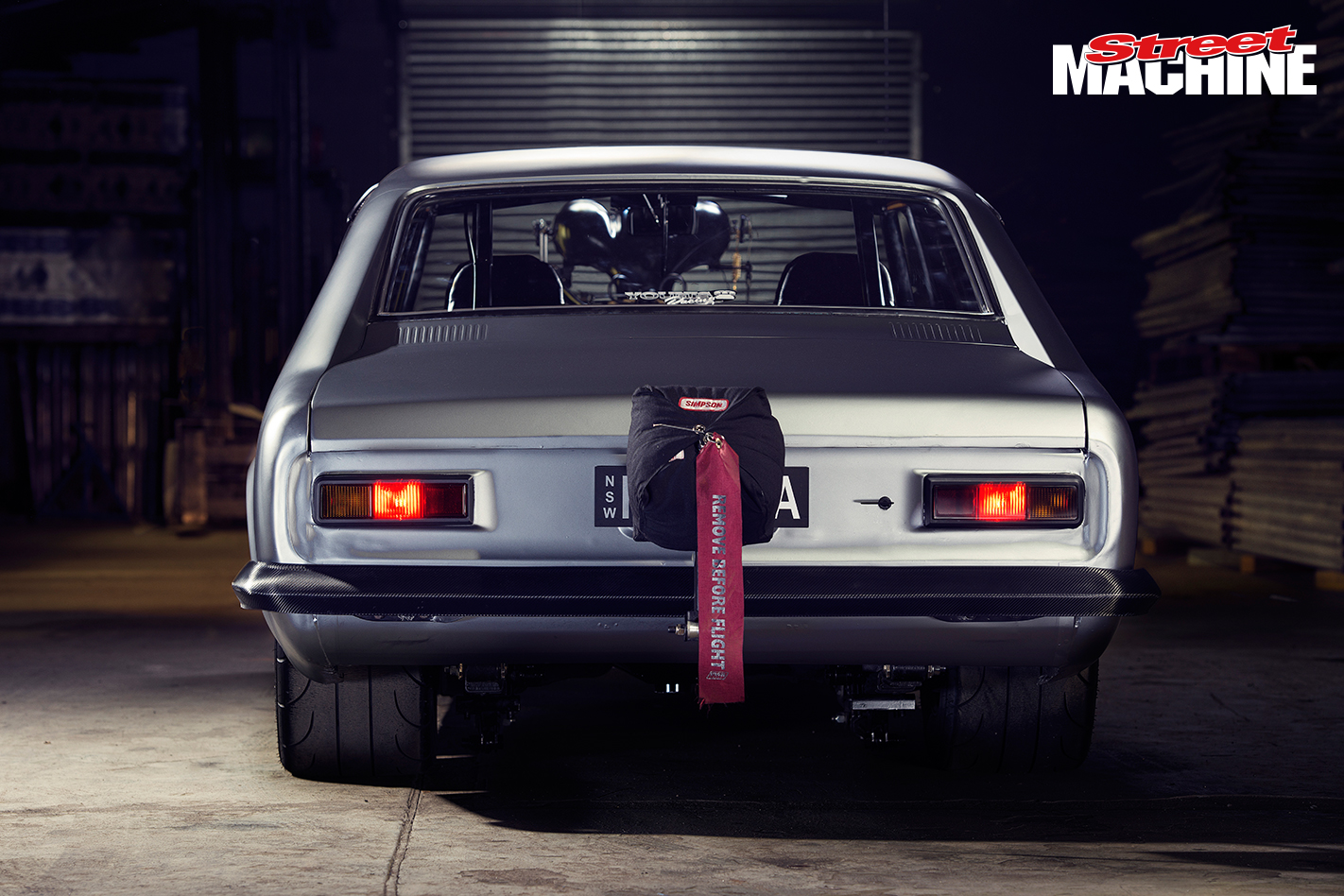 In three short months, the car was given a comprehensive visual overhaul, a mechanical freshen-up, and the all-important 6/71 blower and Big & Ugly injector hat. The transformation was so extreme that we had to do a double-take at Street Machine Supernats before we realised it was the same car.

“I bought the blower and was just going to plonk it on there, but then my mate Adam came over and suggested that we sheet and smooth the engine bay,” Danny says. “We took the motor out and he sheeted and painted the bay and the door jambs matte grey, and painted the blower, motor and everything else black. Now the only chrome on the car is the seatbelt buckles!” 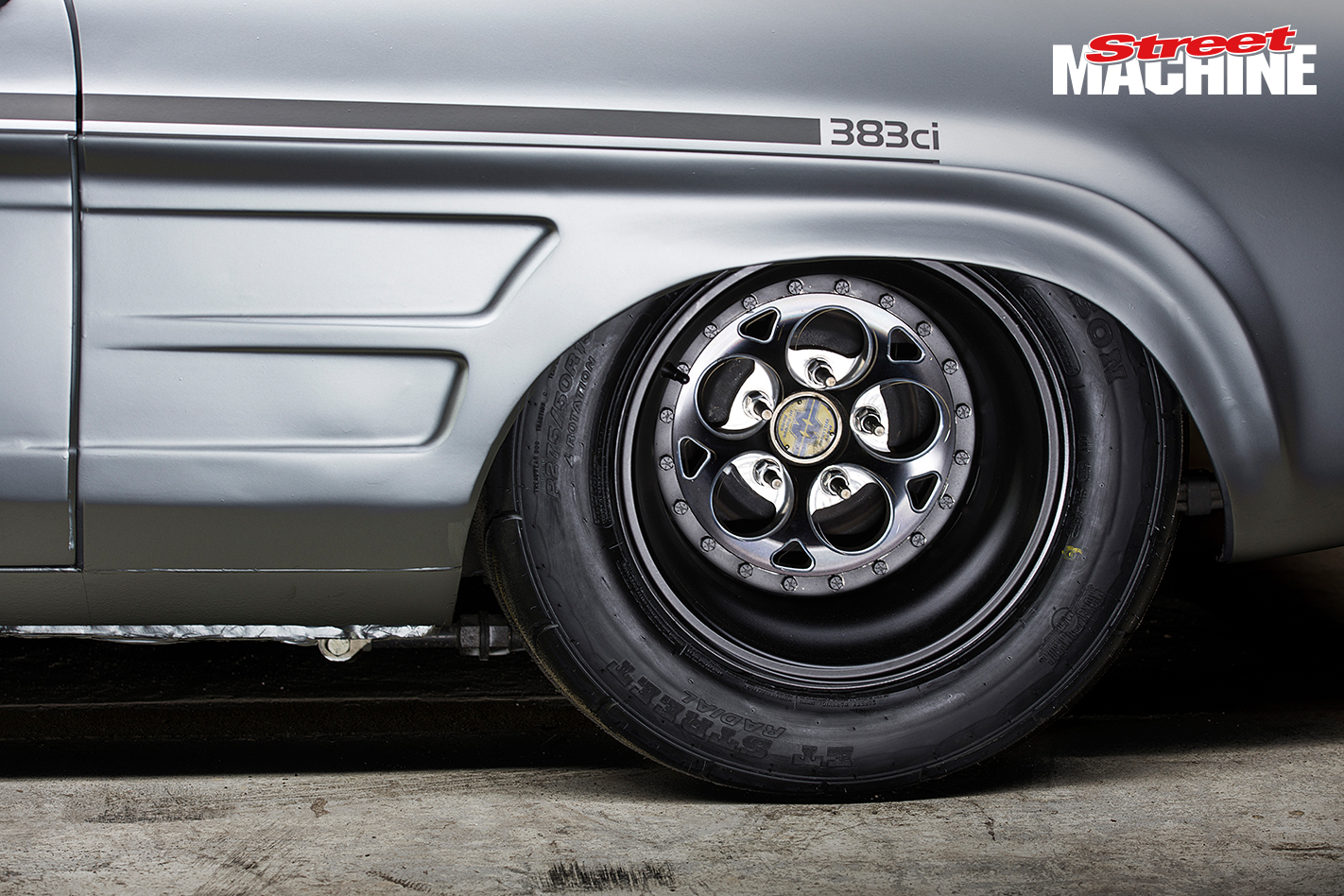 The body was wrapped in matte-grey vinyl by Danny’s signwriter mate Andrew, who made an outstanding job of it on his first attempt. The bumpers had the bolts deleted and were wrapped in carbonfibre-look vinyl, which was also carried through to the stripes, ‘383ci’ decals, tunnel and dash.

In went a Racepak digital cluster and a pair of Simpson camlock harnesses, and the billet steering wheel and other interior components were painted black to match the murdered-out engine bay. The sheet-metal dash and tunnel are the work of Damien ‘Chubby’ Lowe at Lowe Fabrications, while the false floors and custom-made rear seat were knocked up by Danny. 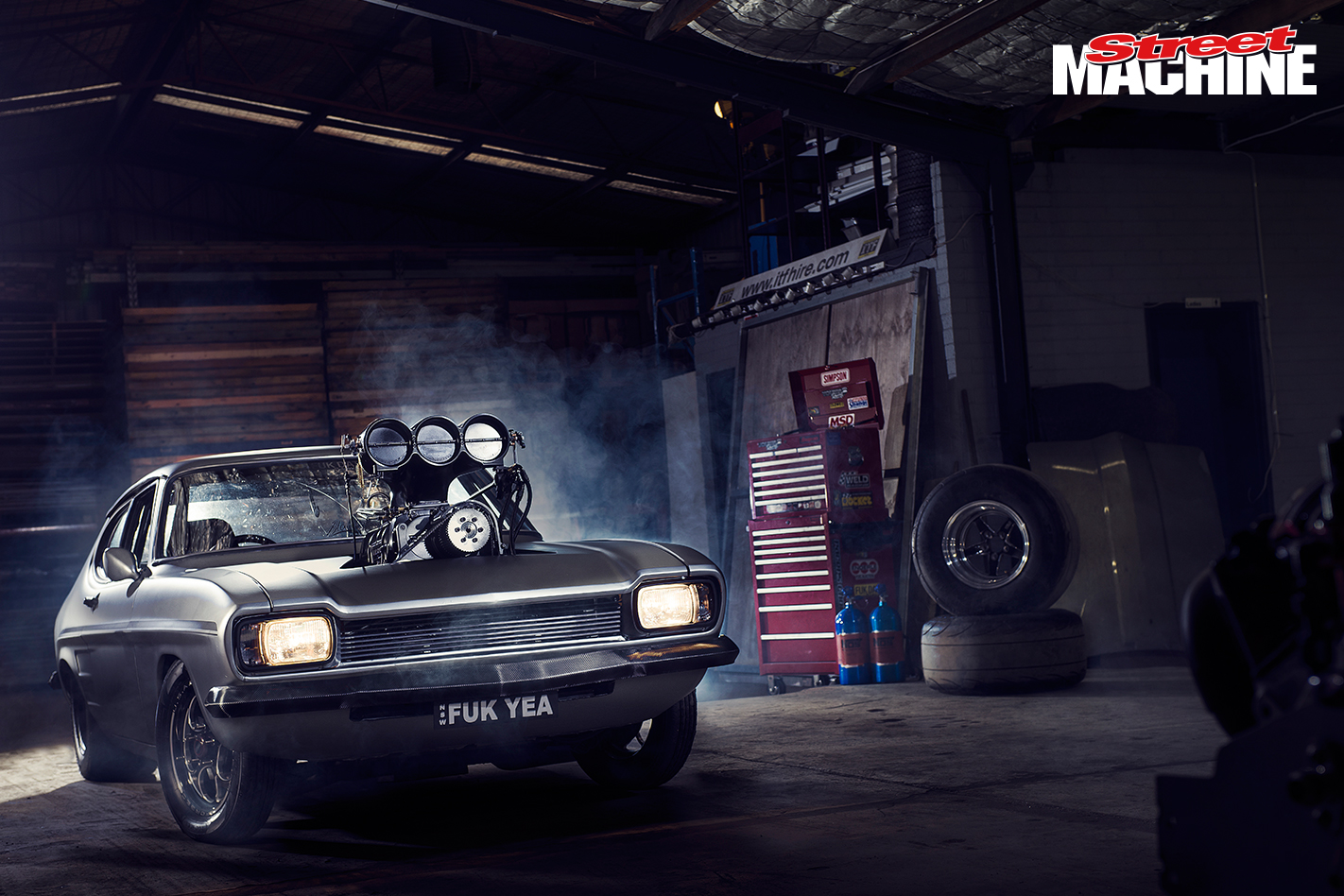 The engine is still exactly the same from the heads down as the nine-second aspirated 383ci combo that was lifted from the Anglia (Eagle crank and rods, JE pistons, World heads and Crow solid cam), but with the addition of a blower and hat, it now makes 1100hp at the crank on meth. “All we really did when we put the blower on was freshen it up and add a crank support,” Danny says.

“We had to adjust a few things in the engine bay, like mount the tranny cooler under the car, move the radiator forward, re-mount the catch cans, and move the header tank under the front guard to create space. We changed to two-inch primary headers and changed the fuel pump, but otherwise we just bolted the blower and hat on. The engine is still running 11:1 comp, which is why I’m running it on methanol.” 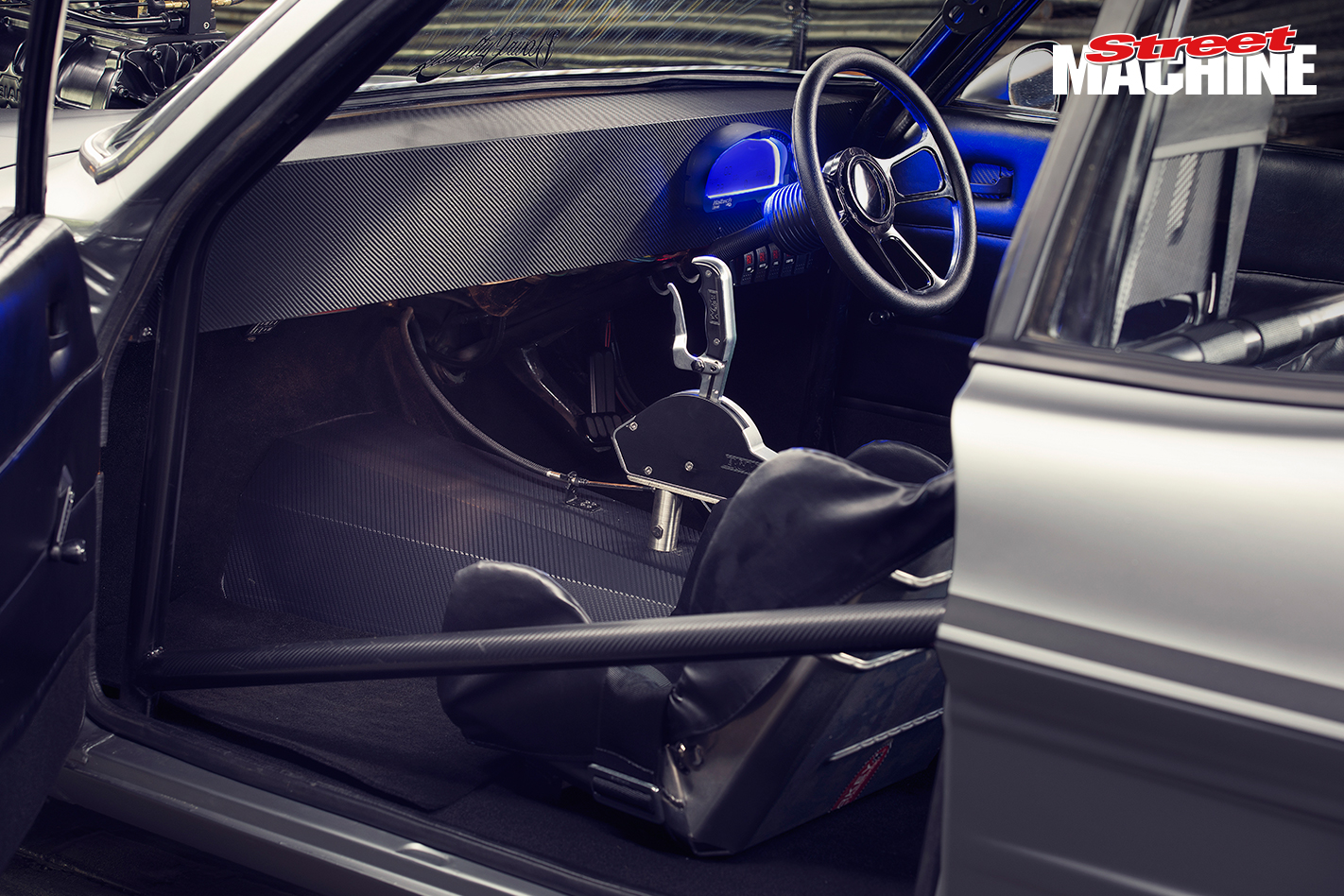 The interior is sparse but racey with a Racepak dash display, Kirkey race buckets, and B&M shifter

And in a move that’s sure to reignite the age-old ‘what constitutes a street car’ debate, Danny intends to cruise the Capri. “Definitely,” he says with a grin. “After I’ve run a number that I’m happy with on methanol, I’ll convert it to E85, get a full exhaust made up, take the parachute off it and cruise it.” His goal is to drive it to the track one Wednesday night, race it, smash the tyres off it in the skids, and drive it home. 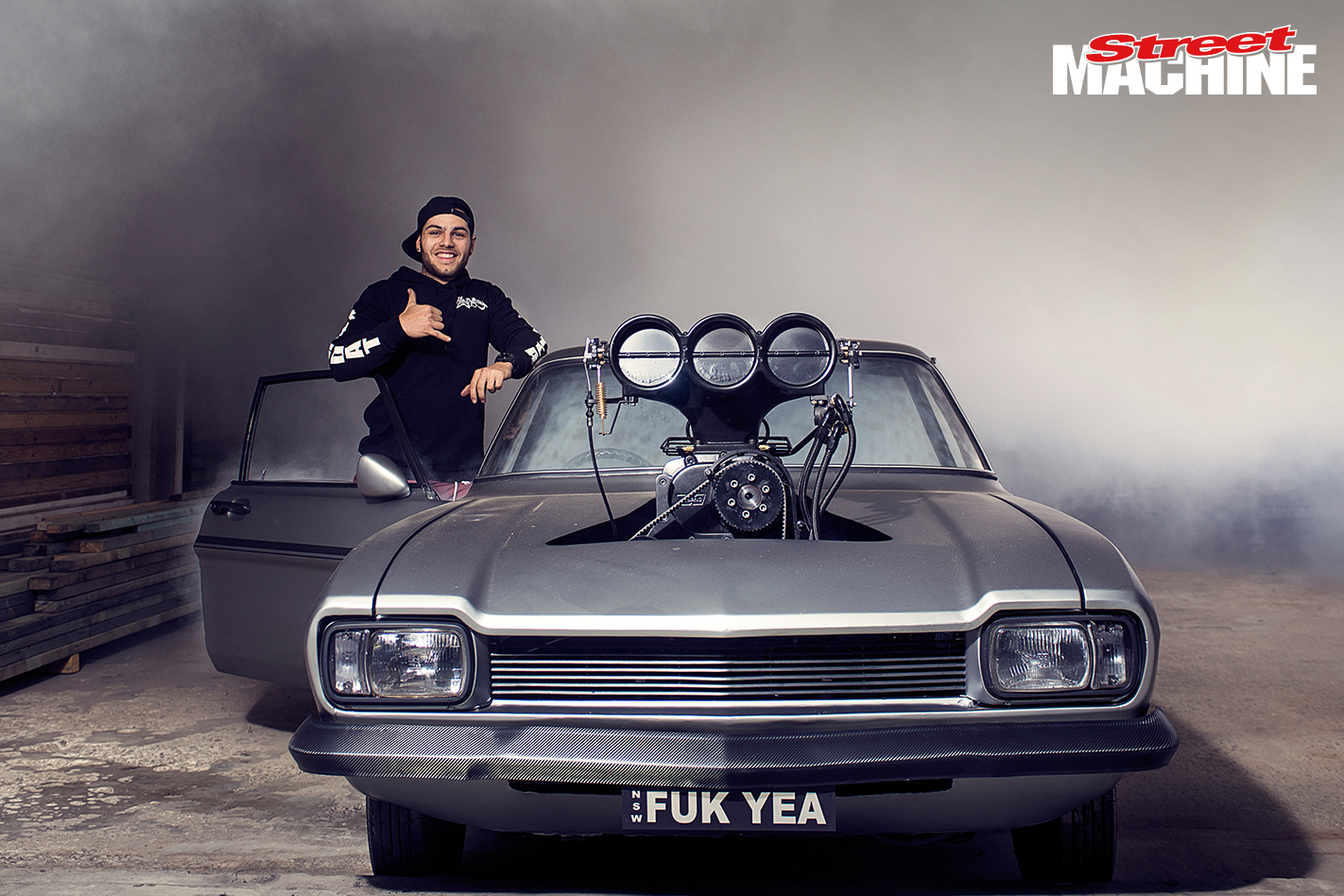 The Capri was built as an all-rounder - it just needs a full exhaust, E85 conversion the parachute removed to be streetable

“It’s an all-rounder car that I can race, skid and cruise – the ultimate street machine in my eyes. I’m looking forward to cruising it four-up at Summernats – that’s why I wanted a back seat. I want to do Summernats, Bathurst Autofest, Powercruise, APSA meets, burnout comps – anything. I want to do as many events as I can afford to do.”

The Capri’s constant state of evolution isn’t showing any signs of abating, either. Danny’s already talking about a colour change, some blacked-out billets and an interior re-trim. He’d also like to build a KE10 Corolla with venetians, hubcaps, an LS and six-speed manual. Knowing Danny, he’ll probably have it halfway built by the time you read this! 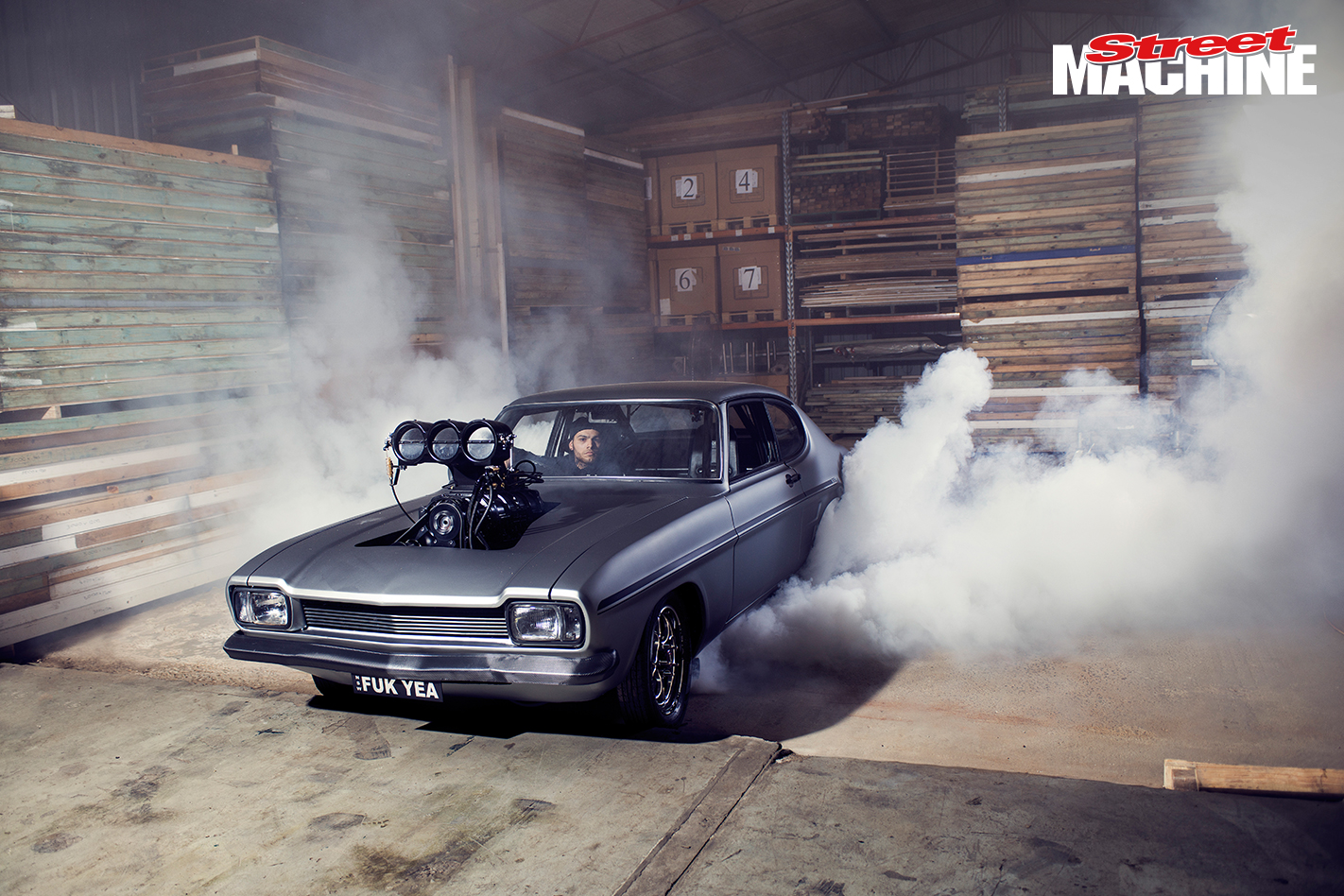 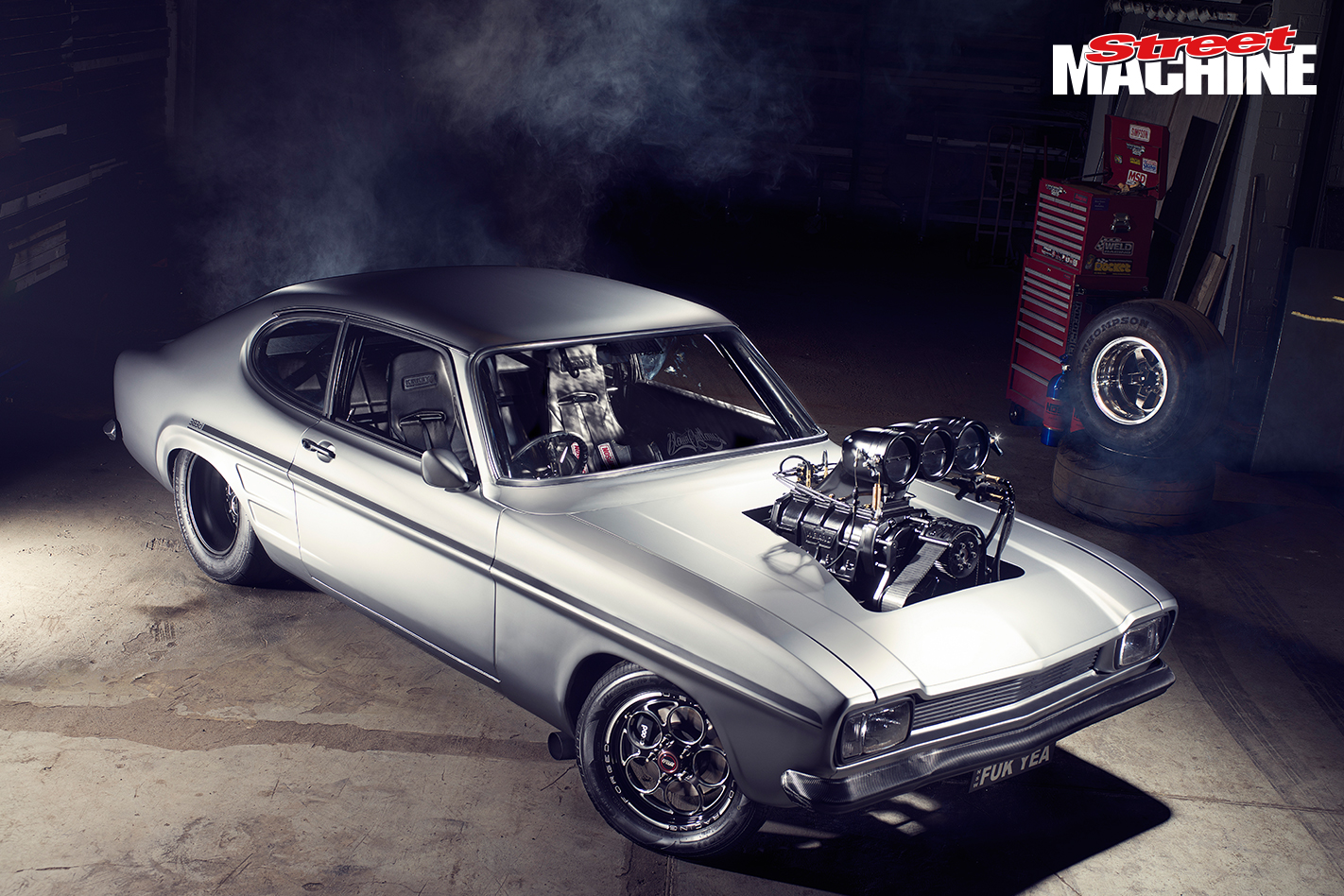 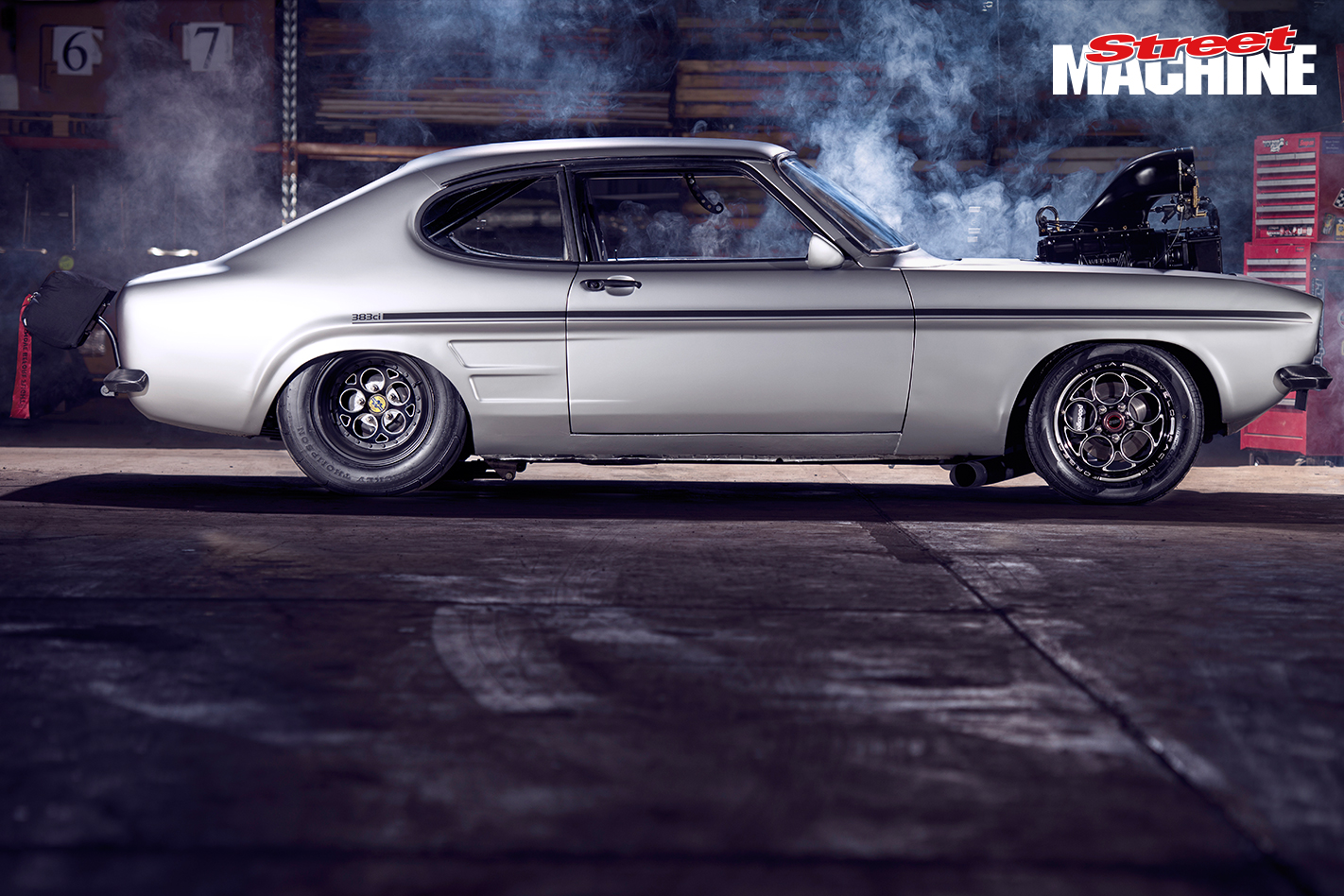 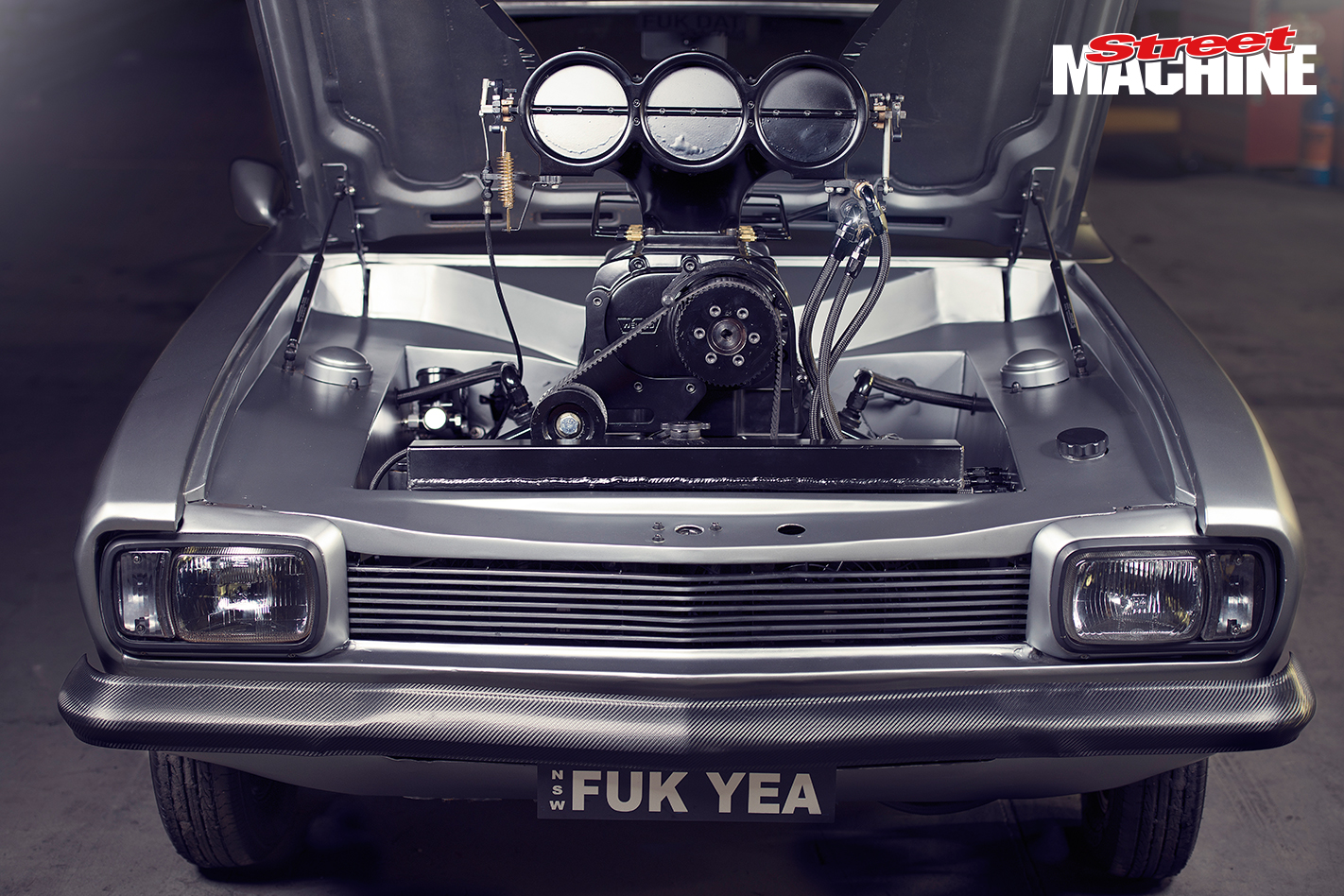 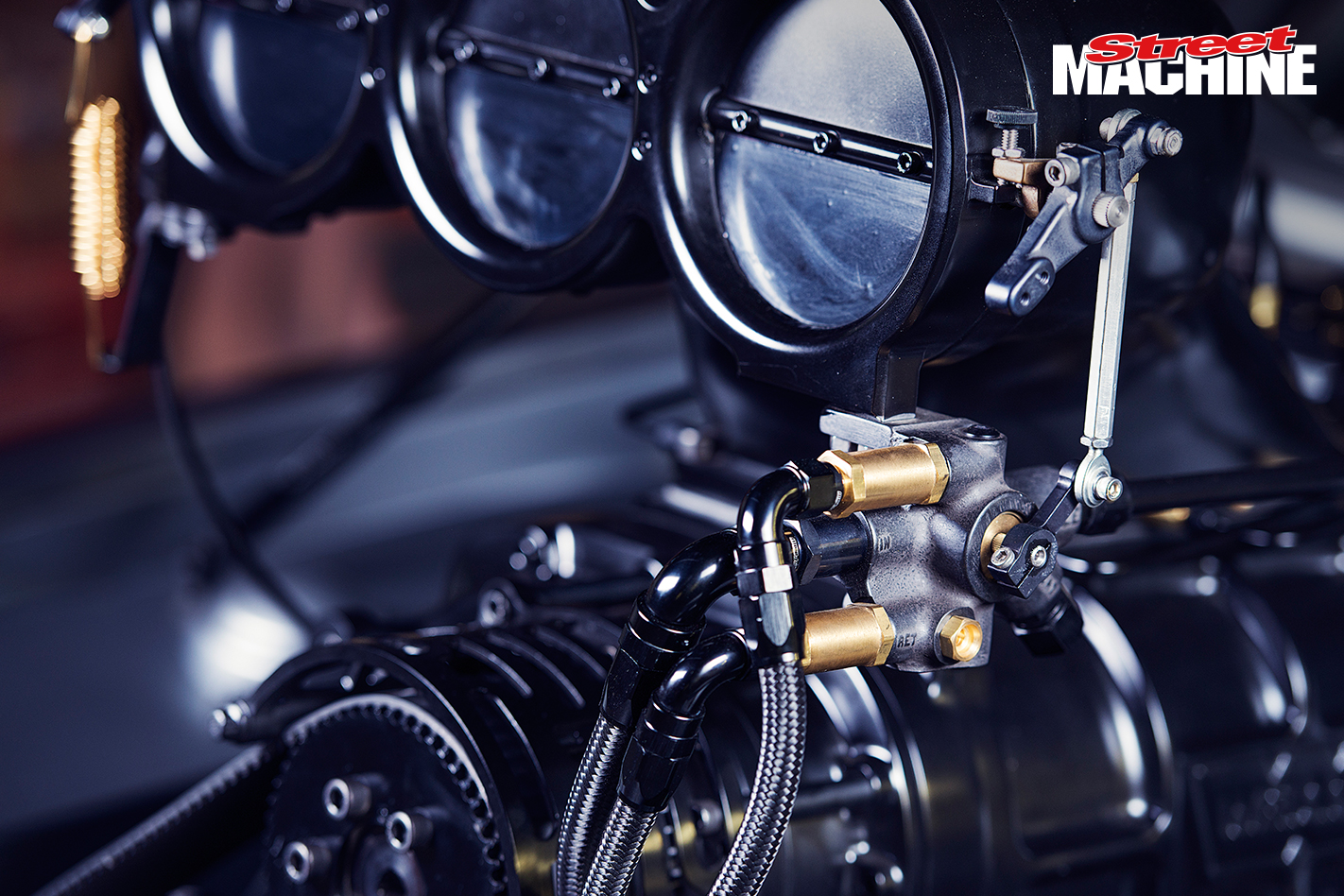 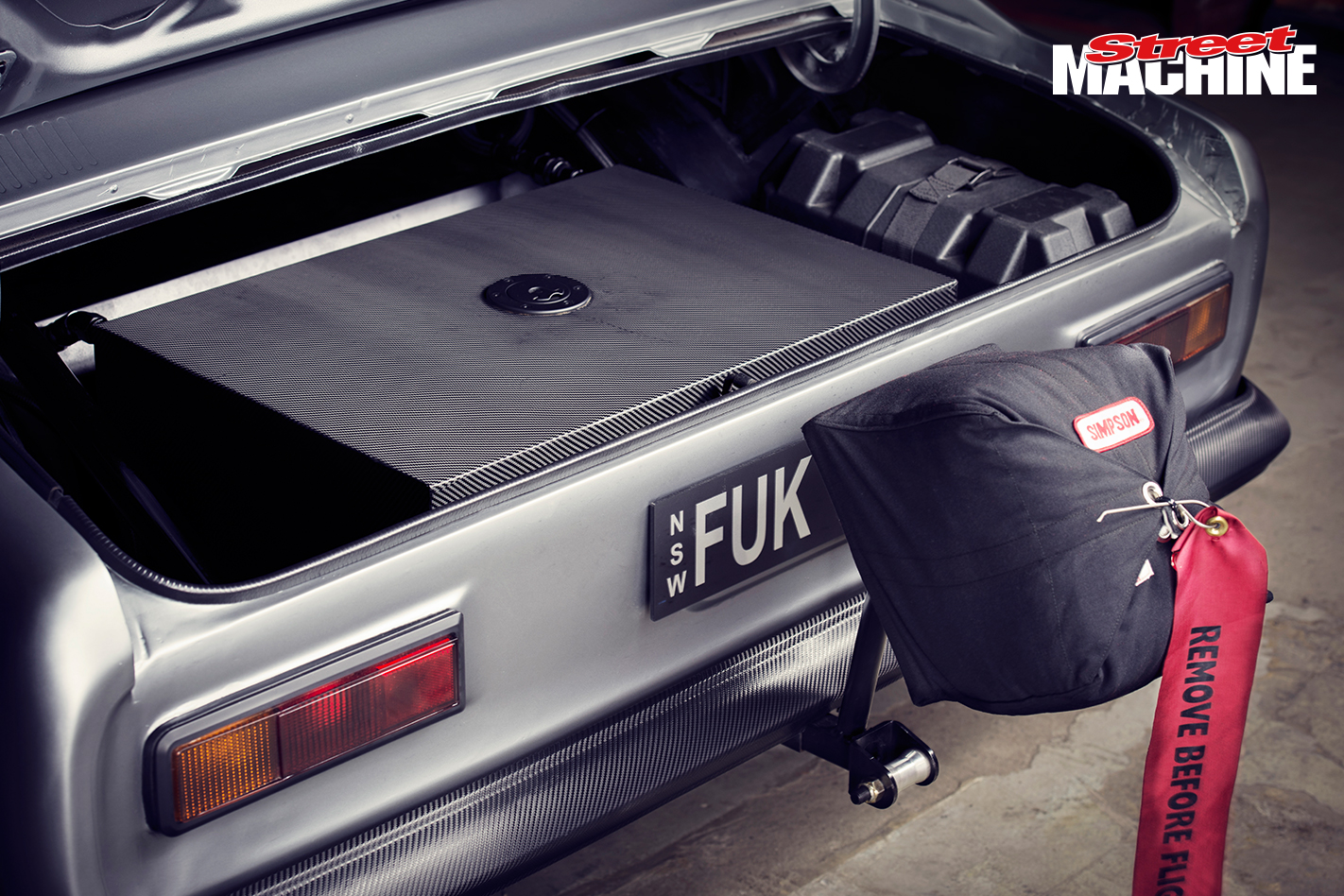 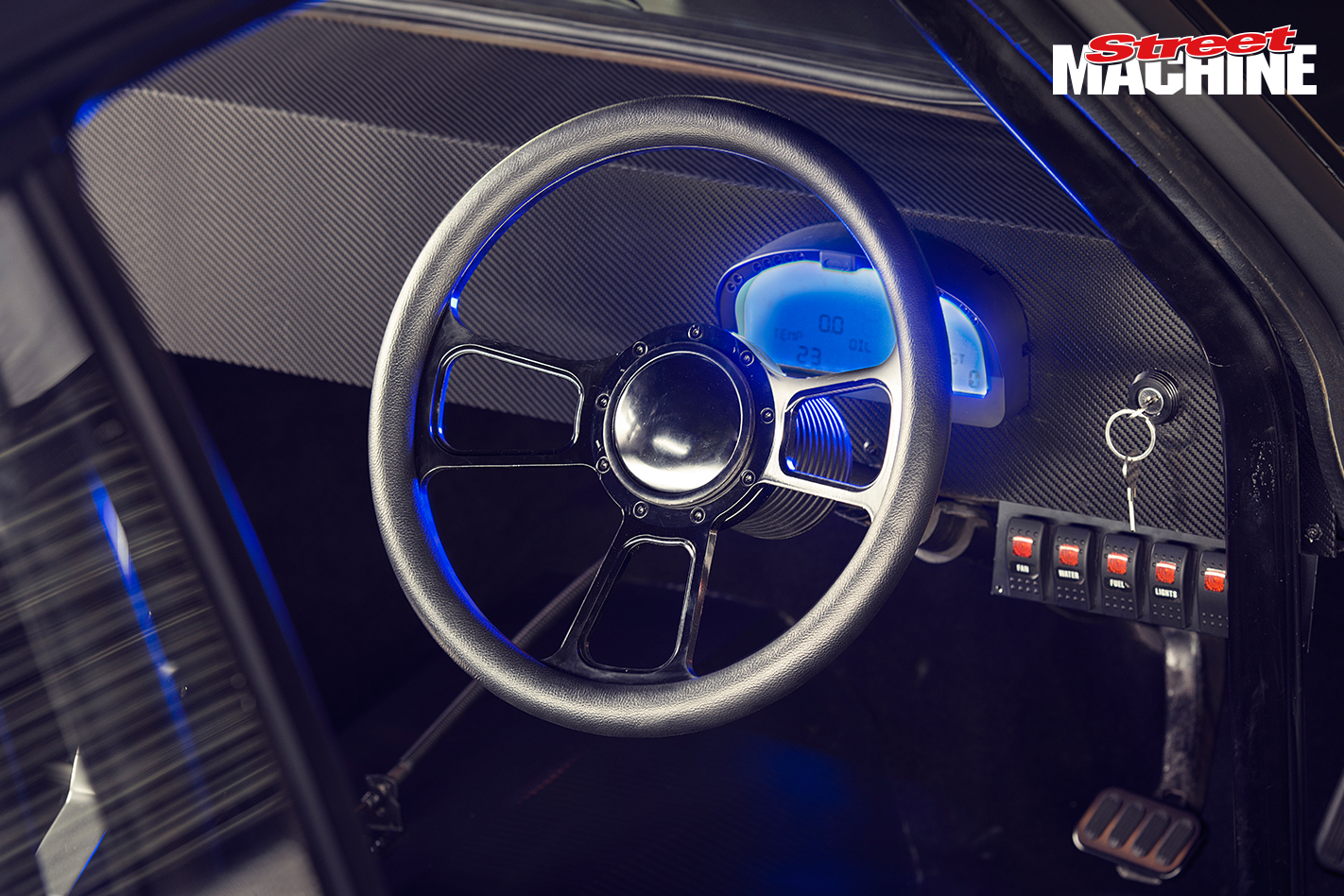