Sticking an LS motor in a classic XW Fairmont is tantamount to Heresy for some, but Jon Freni did it anyway, leaving the naysayers in his dust

ALTHOUGH motivating a Ford with anything other than Dearborn power might sound blasphemous to the Blue Oval brethren, it’s no secret that GM’s LS donks have a lot to offer; they’re cheap, plentiful and produce bulk power. Melbourne’s Jon Freni clearly had few qualms fitting one to his XW Fairmont. “I’m the guy that goes to a hot rod show and rolls his eyes at every ’32 Ford with a 350 in it,” he laughs. “I can thank my brother Dave for helping me think outside the box; his XP runs an RB25/30 and a dirty big turbo.” 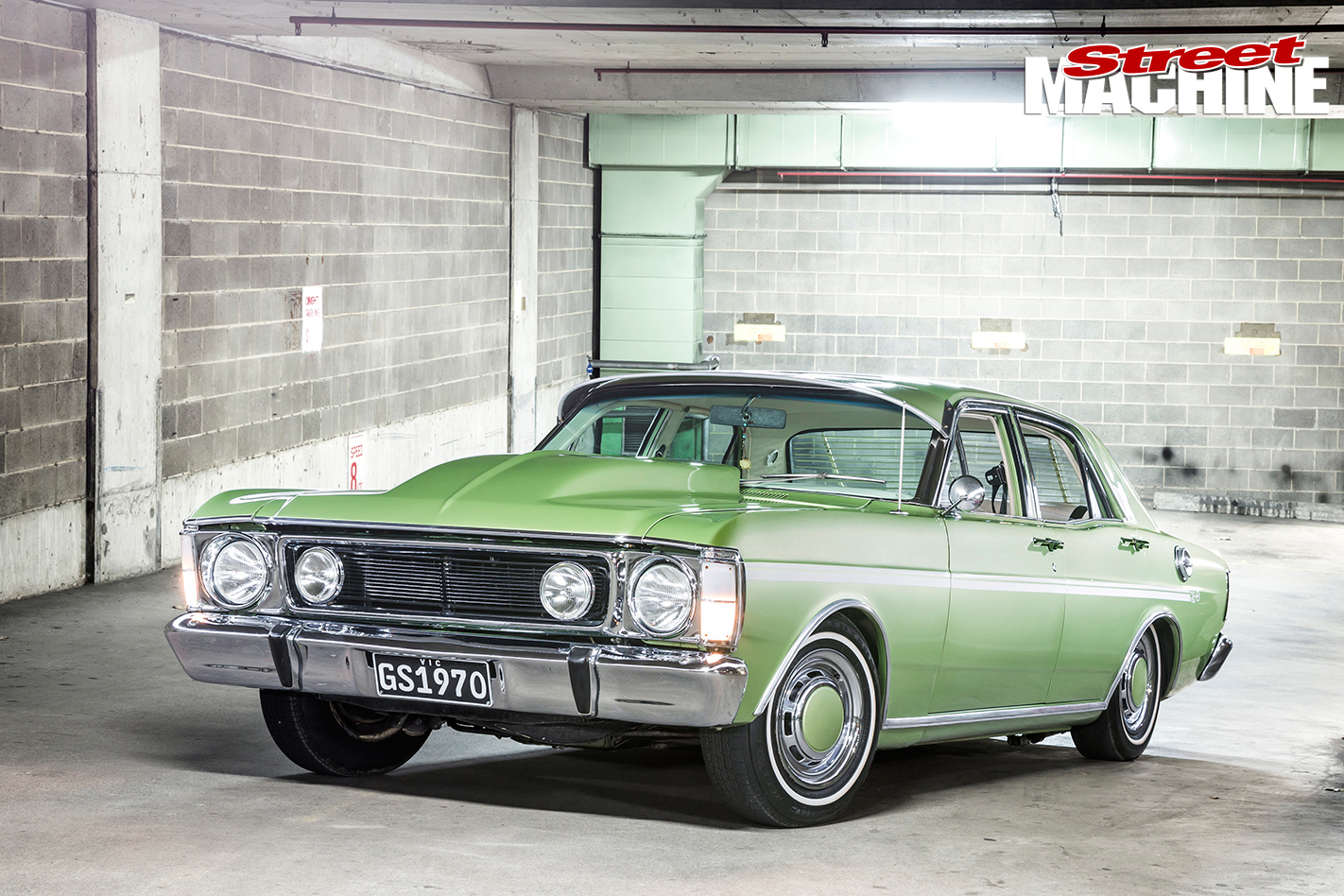 Jon has always loved Fords, and in 2006 decided that his next one had to be, quite specifically, a factory Lime Frost XW Fairmont GS V8. “It took 11 months before we found one that ticked all the boxes, except it had been painted blue,” he says. “I didn’t care if it was hot pink with Barbie airbrushed up the side – the codes were right, so it was coming home!” 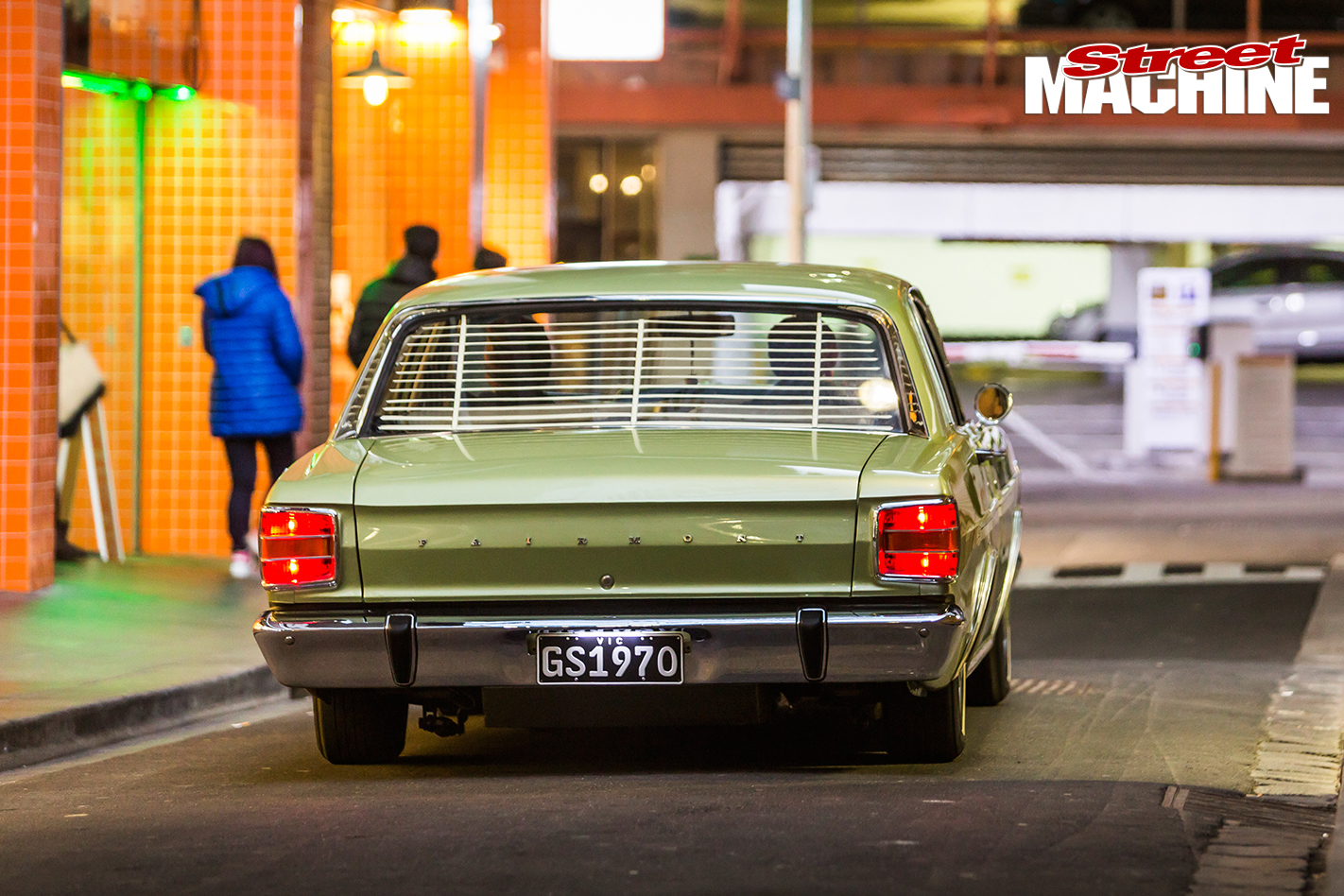 Jon was familiar with the work of Lou Zaffiro of Accident Repair Centre McKinnon, and knew he was the man to help get the XW up to snuff. It was on Lou’s insistence that they sandblast the body. “It was a fairly tidy car, but when it came back from the blasters, it looked like a pasta strainer,” Jon says. 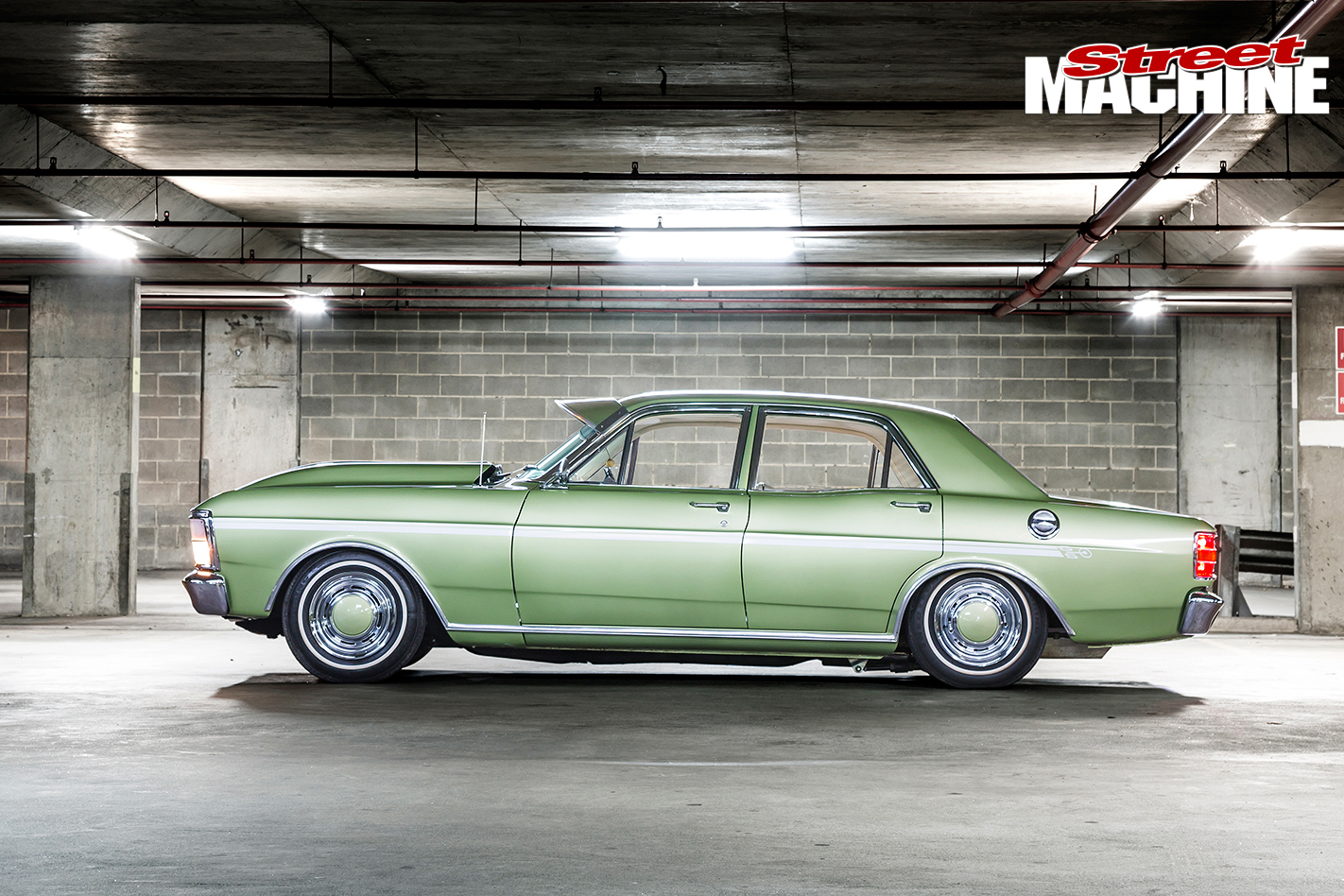 Even though it was more colander than car, Jon decided to blow the budget, pulling the car down and handing it over to Lou and Basil at Accident Repair Centre. The boys even unpicked the rear quarters, and spent 18 months metal-finishing, lead-wiping and filing before even starting on the high fill.

Two full years later, Jon had the fresh shell back home, ready for reassembly. “There were bits sprawled across the kitchen, lounge room and bedrooms,” he says. The partsocalypse included a fresh 408 Clevo by Dandy Engines and a stout C10 by Al’s Race Glides. 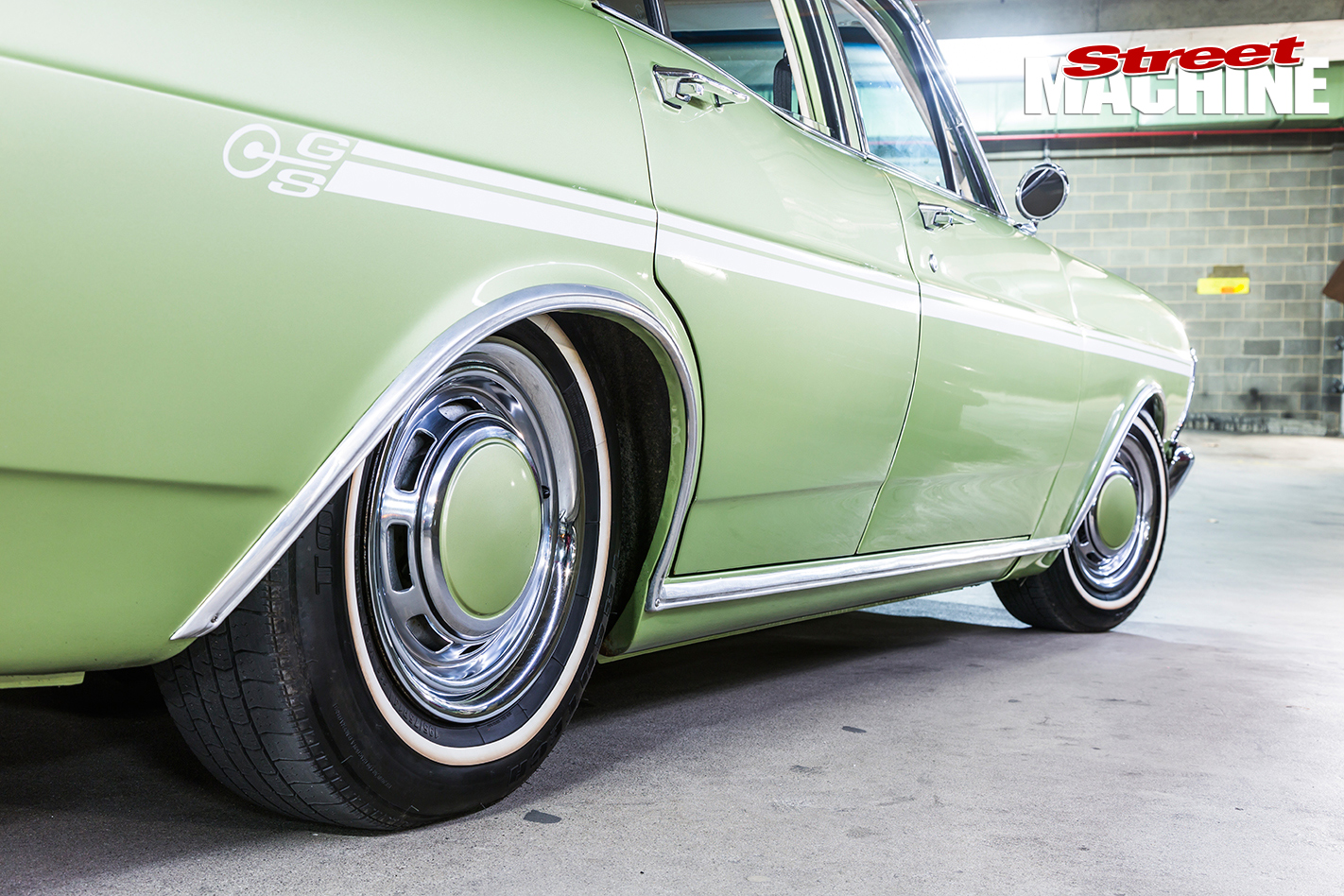 The XW used to run huge Simmons alloys which covered equally huge Hoppers Stoppers brakes, but they've been binned for Cortina caps which were tacked to a set of 14in chrome rims to fit

Jon then applied extra pressure to the project; he decided to have the Fairmont ready for his 2009 wedding day. A month out from the ceremony everything seemed under control; the Fairmont was running and ready for rego. But things went awry. 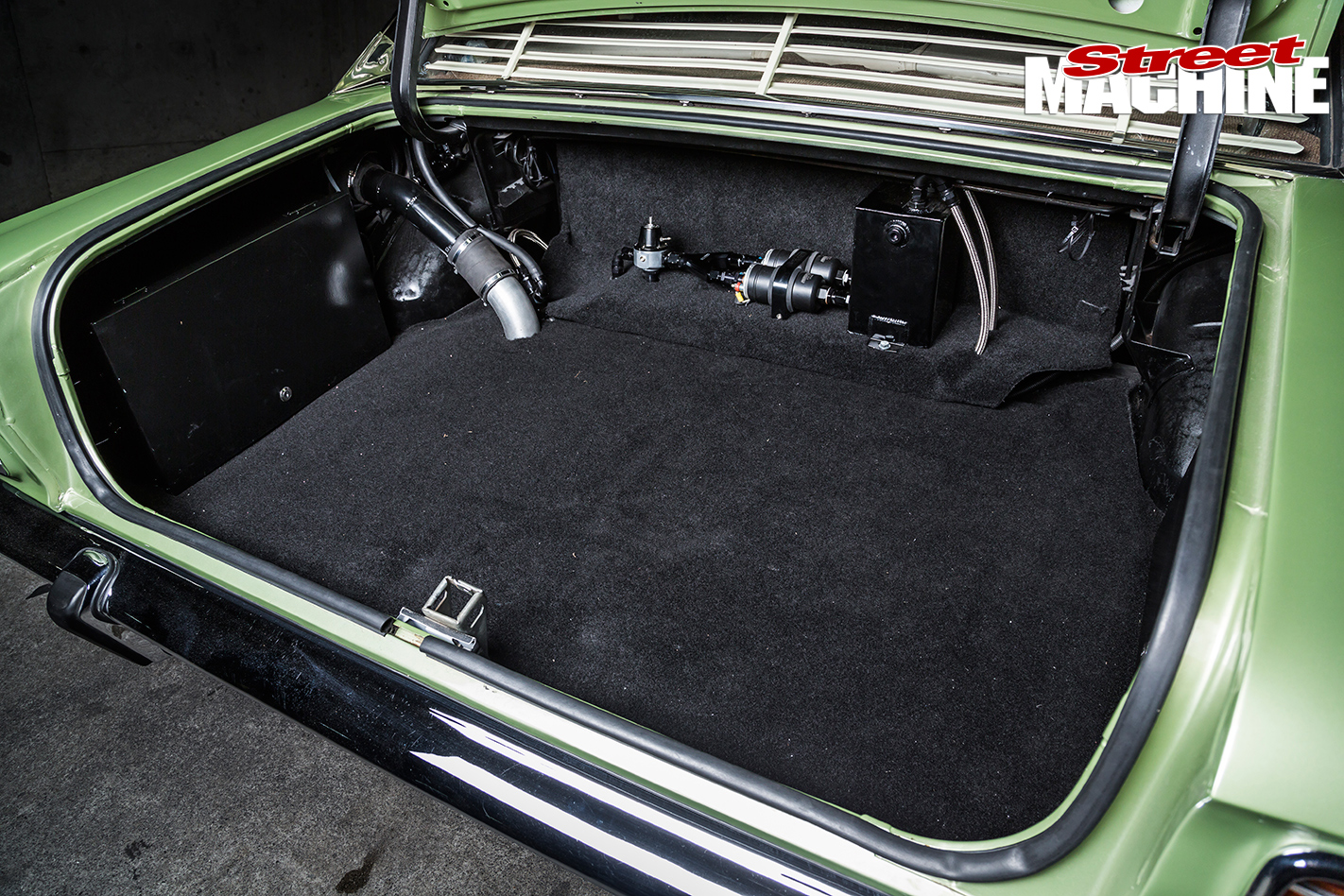 “Because of the fresh engine, a departmental pen-pusher decided it was a suspected stolen vehicle,” Jon explains. “It was going to be six weeks before the cops could straighten it out.” Ragged, desperate and all out of prayers, Jon returned with a secret weapon to sort things out. “I’m all tattooed-up, so I brought my mum with me; mums can fix anything.” And she did! 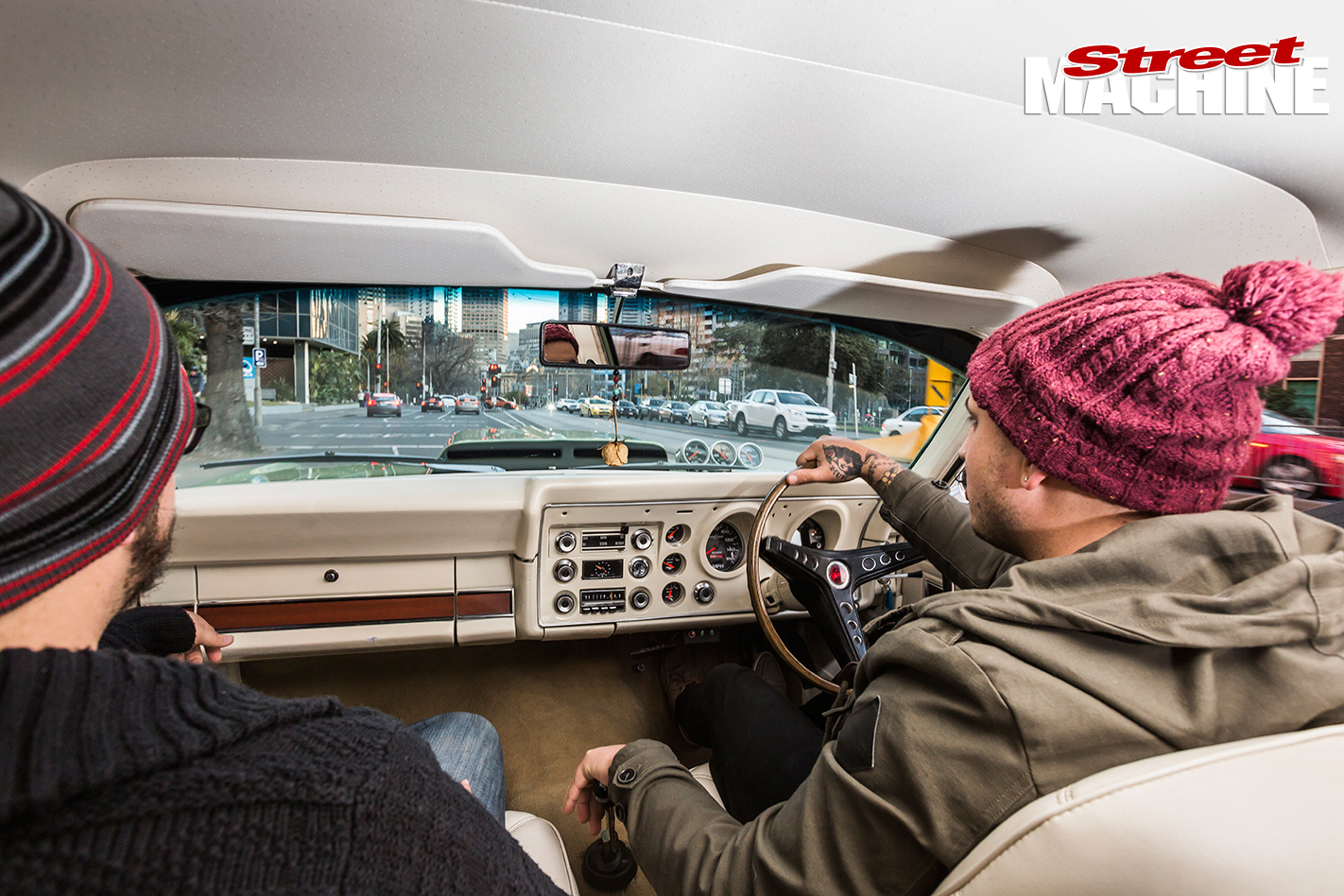 Rego problems solved, Jon enjoyed a summer of serious cruising with the 408, then sent it to Casey Auto for a service. It was ready on April 1st – yep, April Fool’s Day – so he asked his brother Dave to pick it up, a decision that almost binned the Fairmont for good. “I warned him to take it easy; it had front-runners and they make for the shittest steering,” Jon remembers. “When Dave rang and started with, ‘Don’t get angry,’ I recalled the date and laughed at his little joke.” But Dave didn’t laugh back. Sure enough, when Jon got to the scene, "the Fairmont was off the road, deep in the trees”. 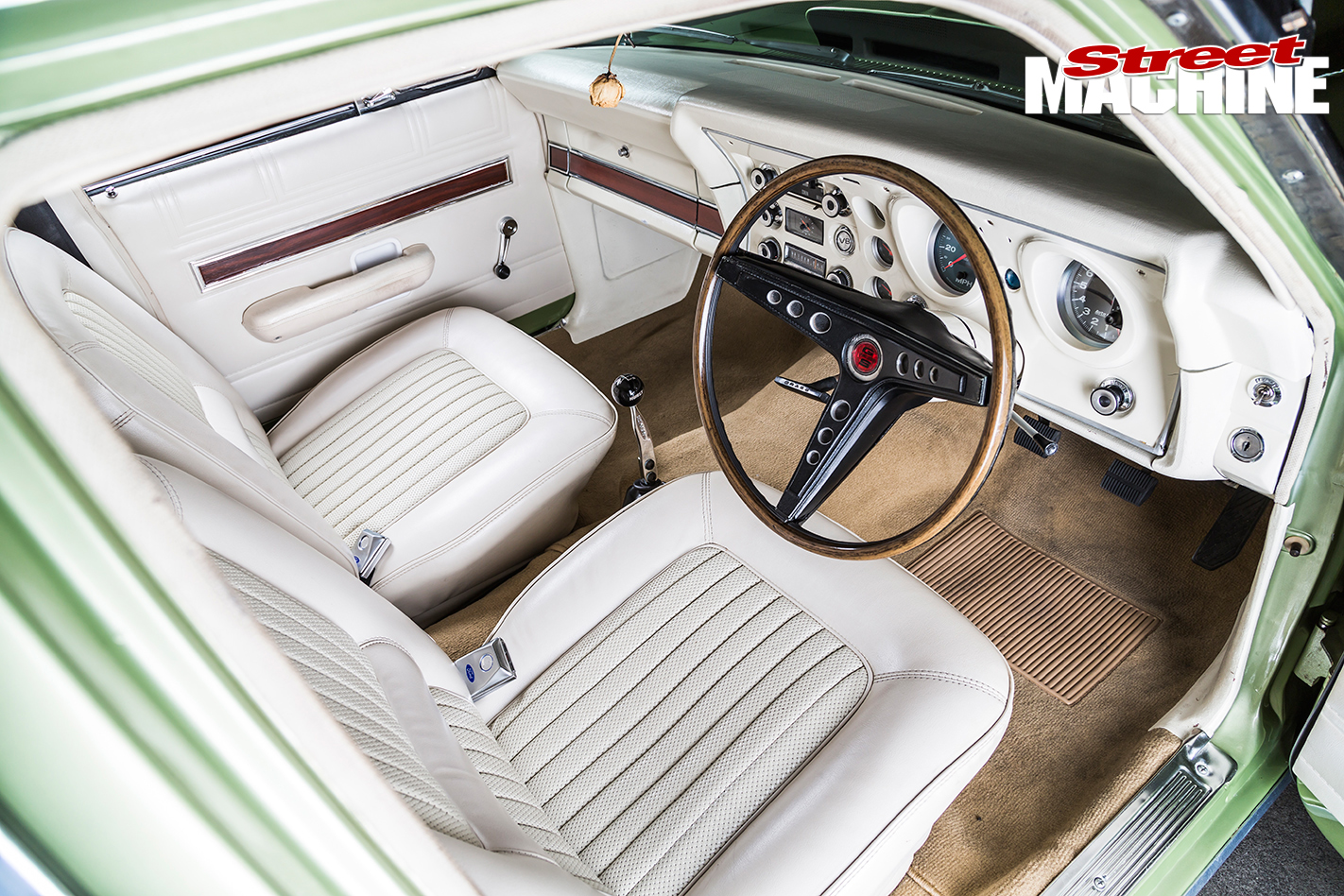 John wasn't keen on the XW's black carpet and decided to change it to buckskin. The rest of the cabin has been retrimmed in the original style

Fortunately the damage looked worse than it actually was. Jon shipped the XW back to Lou, who repaired it, painted the whole car again and changed the GS stripes from orange to white. “We laugh about it now; Dave tells people he’s the reason the thing looks so good!”

The XW ran the same combo for three years, until Jon was pulled over on a routine stop. “I had the wife and kids [with me] and I wasn’t being a dickhead until I opened my mouth.” Faced with a defect for his bonnet gauges, Jon quoted the appropriate by-laws stating they were legal. “Well, because I decided to be a professor about it, I ended up over a barrel.” 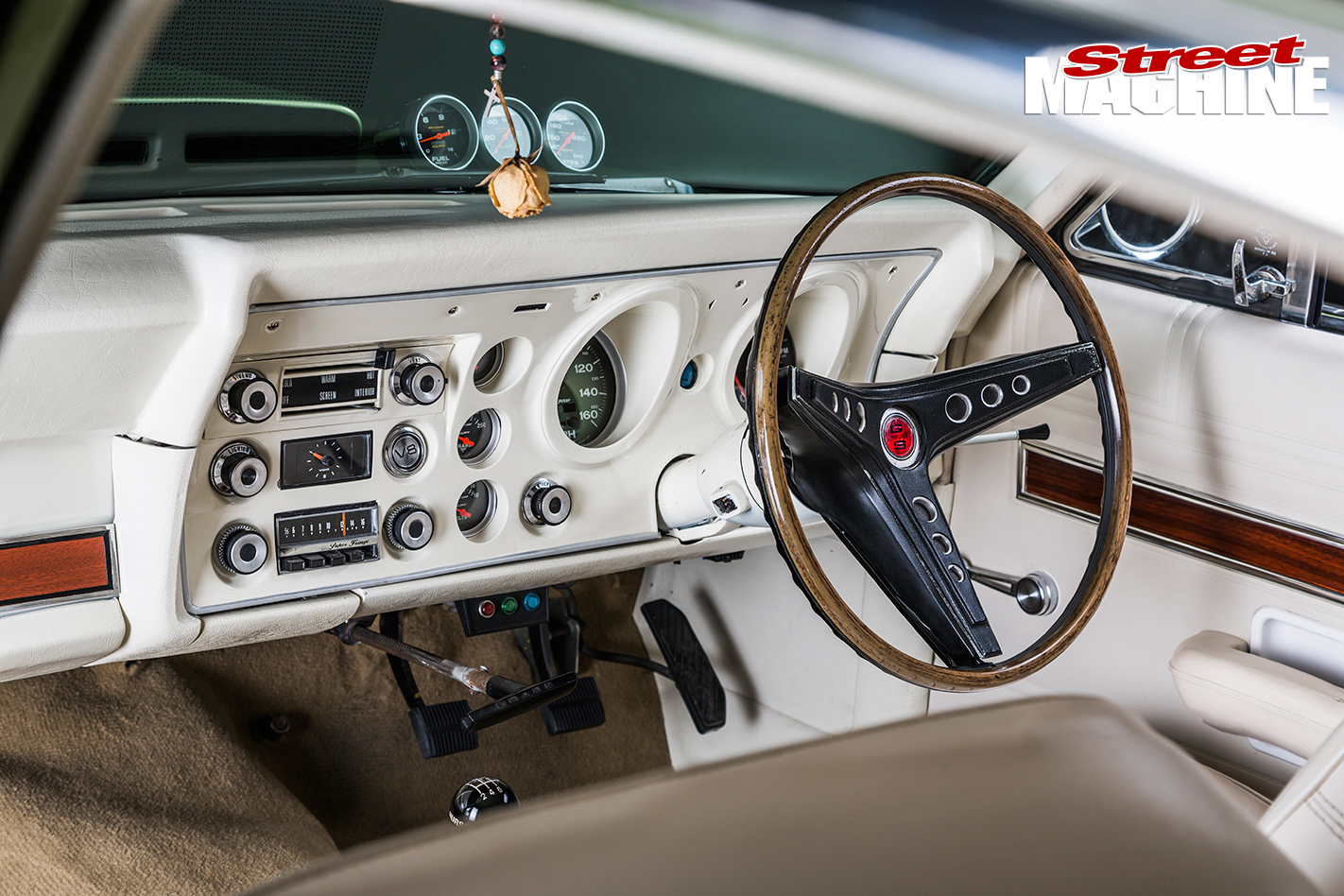 John and Travis Maddicks have modified the dash to accept some Auto Meter gauges and an XY cluster, which includes a central high-beam light that's been repurposed as a shift light

Much discussion and a yellow canary later, Jon took the Fairmont off the road for another 12 months. “I rebuilt everything to meet every standard possible, got it passed, then parked it in the shed again.”

With two kids bouncing around and a third one brewing, Jon let the XW gather dust, until a mate offered decent money for the 408/C10 combo. With that, the Fairmont was officially retired. But not for long. 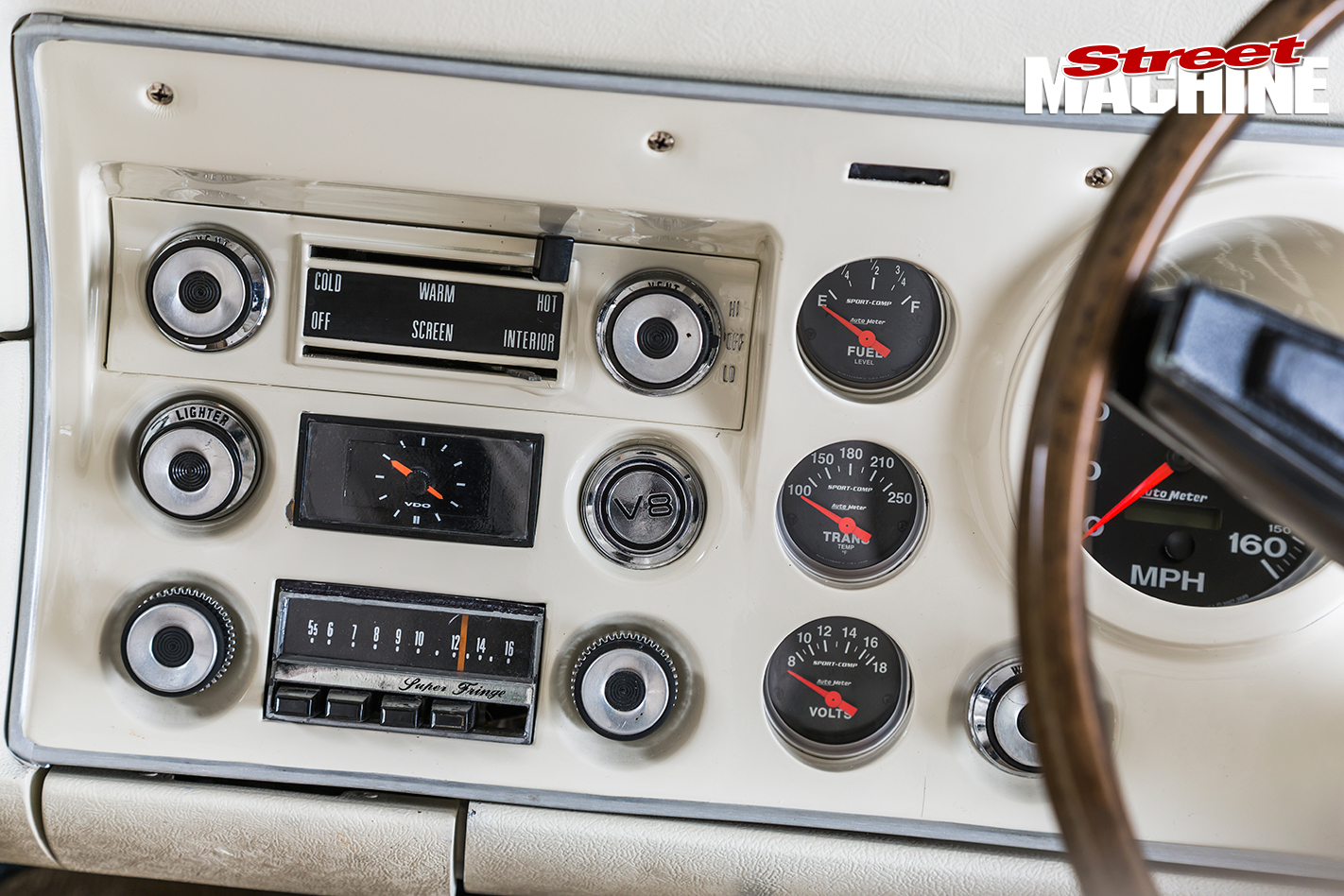 “A few months later, I was having a few drinks with some mates and we brainstormed how to get an economical, family-friendly, freeway-munching cruise machine without sacrificing power.” An LS donk was the obvious answer – a somewhat painful epiphany for a Ford fanatic like Jon, but it was the only option that fulfilled every requirement. 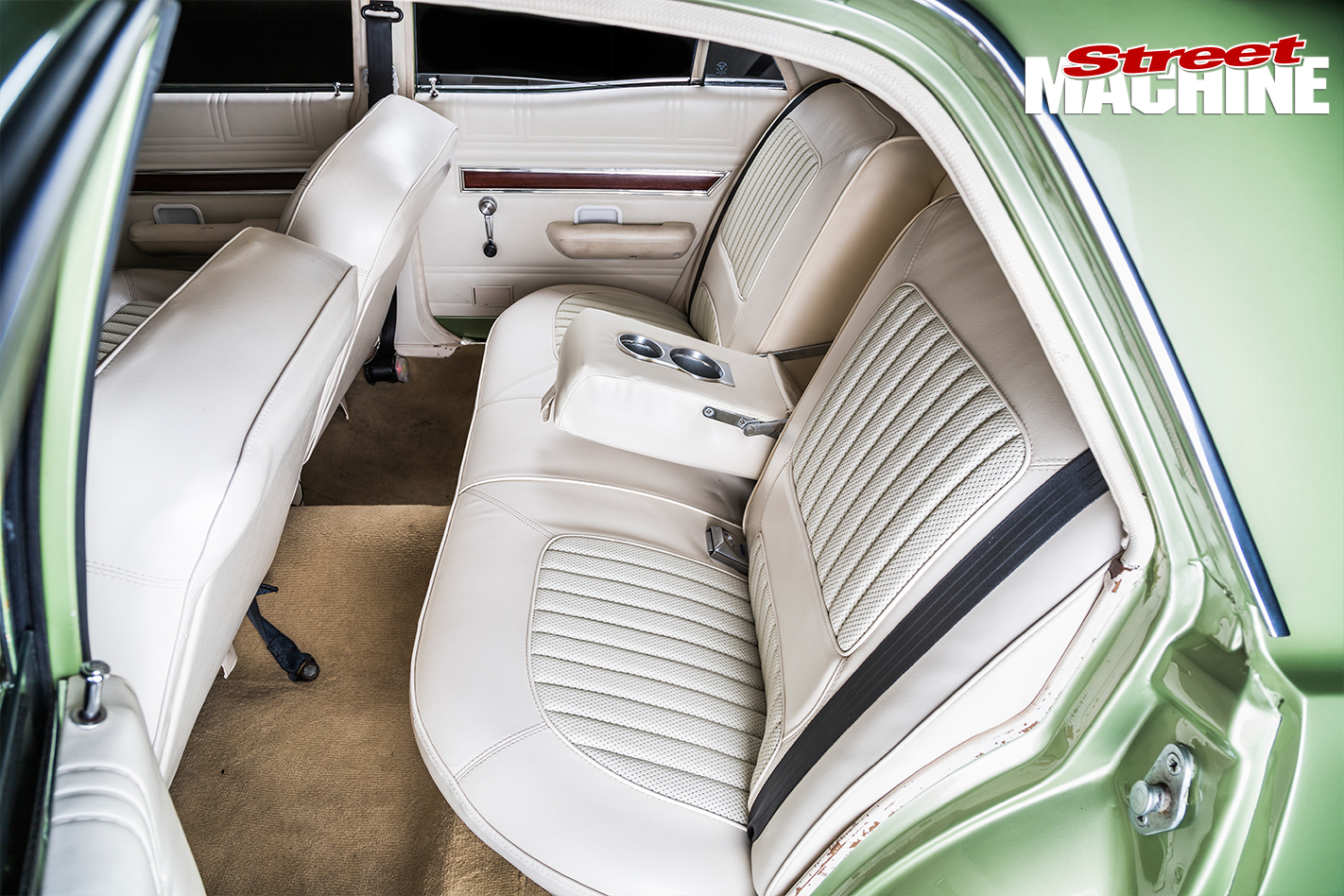 Jon added cup-holders in the rear armrest so the boys don't make a mess. Does he mean his kids or his mates? "Both!" he says

“The next thing I know, there’s a written-off Clubby in my shed and I’m holding a sabre saw,” he remembers. “We kept cutting until the engine basically fell out, then started making shit to fit the XW.” 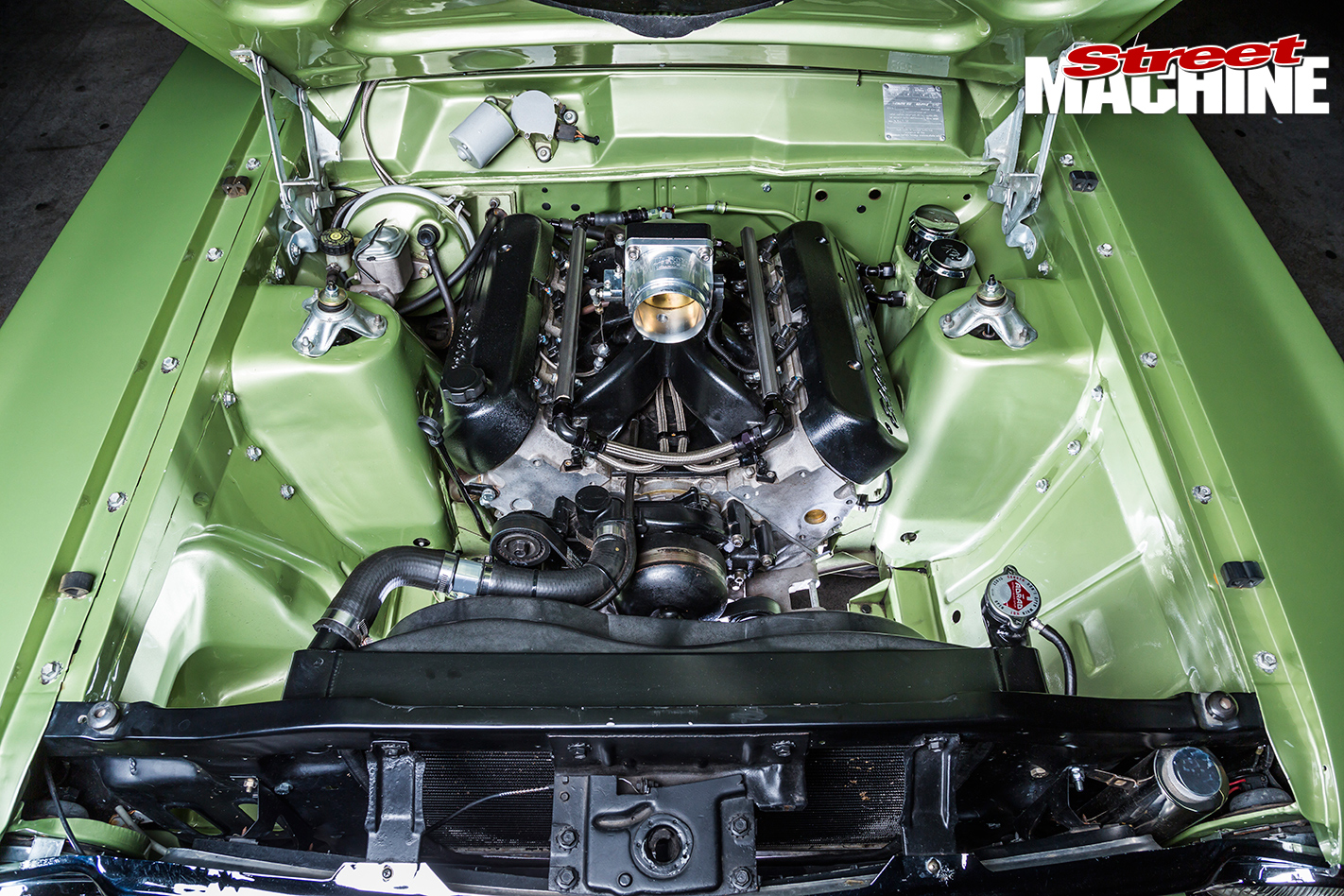 The LS1's alternator has been relocated to the driver's side, so there's plenty of room to add a turbo down the track

With a little help from mates Vince Raffa and Steve Shorey, Jon had the LS sitting snug in the Fairmont’s engine bay in a single evening. “The standard sump cleared the original steering and crossmember like it was made for it,” he marvels. “We got some custom mounts milled up, so the shifter pokes right through the factory hole.” 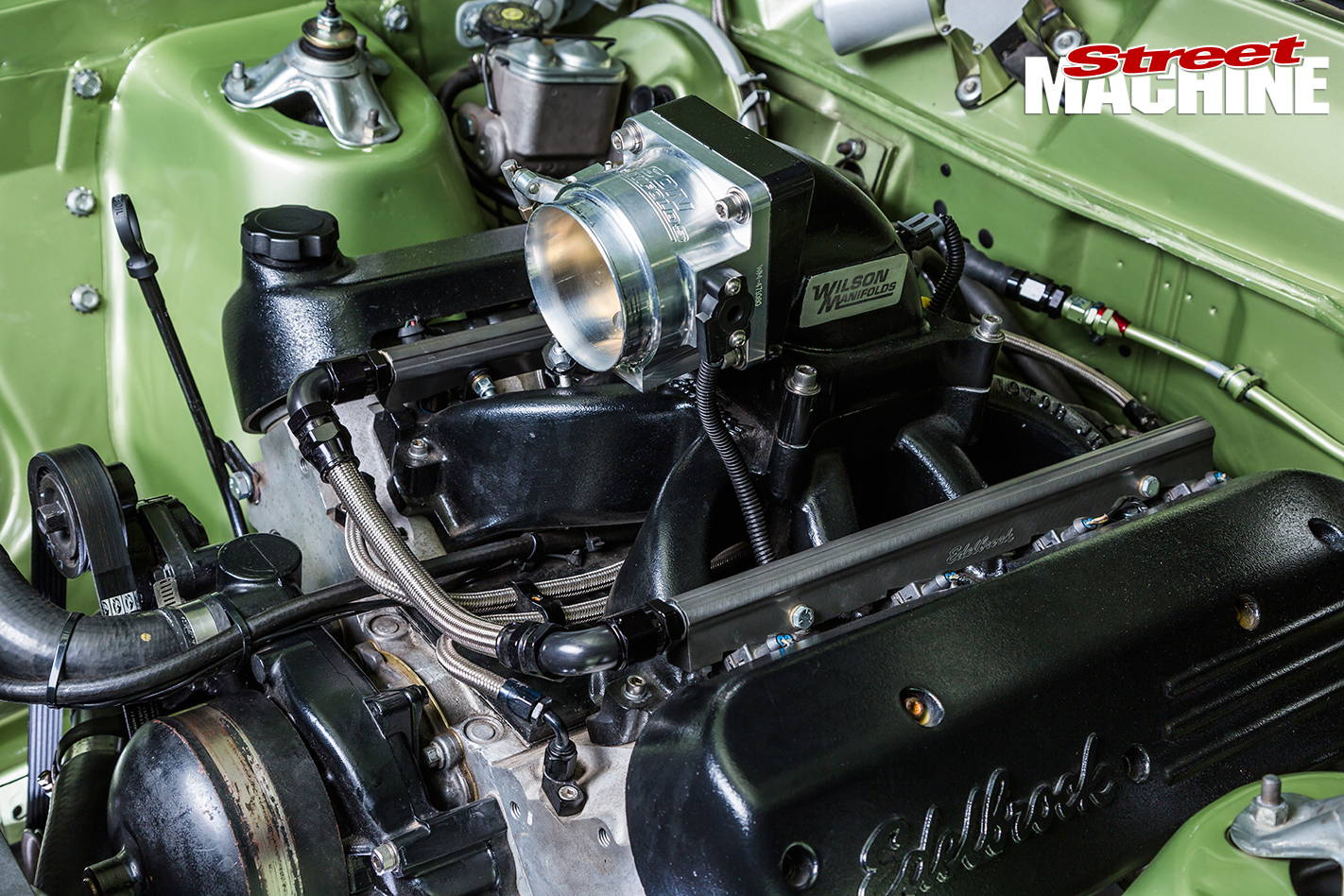 In fact, Jon didn’t cut one extra hole to make it fit: “You could put a Cleveland back in it over a weekend if you wanted to.”

And the response? “I get lots of comments on how I’ve wrecked an Aussie icon,” Jon admits, “but all the Holden boys say how I’ve seen the light and finally made a Ford worth driving!”

Jon has been loving the effortless power of the LS1, but knows it’s only a matter of time before he fits a turbo. There are other projects on his mind, too: “I’ve got a ’42 Chev truck I want to build.” And motivation? “Gotta even out the Ford/Holden ratio; I reckon I’ll fit a Barra XR6 Turbo engine.”