SEX SELLS. So designing a svelte auto-body that mirrors the curves of a jaw-dropping pin-up girl is pretty much guaranteed to be a winner. And a winner Andrew Mitchell's Lincoln Zephyr was, taking out the George Barris Kustom award at MotorEx 2015 with his stunning slammed 'glass body cruiser which was actually moulded from Terry Cook’s world famous, steel-bodied ’39 Lincoln Zephyr, Scrape. It’s one of several dozen bodies he’s sold through his New Jersey custom auto business, Deco Rides.

Andrew Mitchell is a bloke with a penchant for fat-fendered customs who fell in lust when his eyes clasped on Ben Gatt’s Zephyr, Dumped, (SM, Oct ’03). So in ’07, Andrew flogged his custom candy-green ’40 Pontiac to fund the body and parts for his own custom Zephyr build.

With the Australasian agent for Deco Rides being Custom Rods, based in New Zealand, the body did a grand tour from California to NZ, then finally to our fair shores.

Once landed, Andrew got stuck in as time allowed. He explains, “It probably wasn’t the best idea to build a new car at the same time as starting my car business, Autotransformers.

“I started Autotransformers in 2008 after frustrations with working the printing industry,” Andrew says.  After years of modifying, restoring, importing and selling cars, Andrew figured he’d give it a go as a fulltime gig.

Renting a workshop, he worked by himself, doing a bit of everything, but soon extra hands were required, and a panel-beater and spray painter joined him. Two years later, Autotransformers moved into their new 1000-square metre workshop, and after four years they’ve got 10 employees.

The Lincoln was constantly on the back burner, though it was great for stress relief, Andrew says. His calm attitude gives you an insight into how he’s built a successful business with a great team who work well together. And a calm attitude is required when building a car from a bare-shell. With nothing pre-mounted, it’s a completely different ball game to modifying a factory-built ride. For the most part, it’s been a bit of a guessing game, but Andrew’s working knowledge of how a car all goes together has helped him punch on through.

16
The Lincoln Zephyr wasn't a popular car for customising back in the day, but that all changed with the 90s-built '39 Linc dubbed 'Scrape'

Starting off, Andrew reinforced the one-piece fibreglass body with steel, before mounting it on ’39 Ford chassis rails. Next he hung the suicide doors, boot and bonnet, and a heap of work went into creating the super-smooth finish it has today. 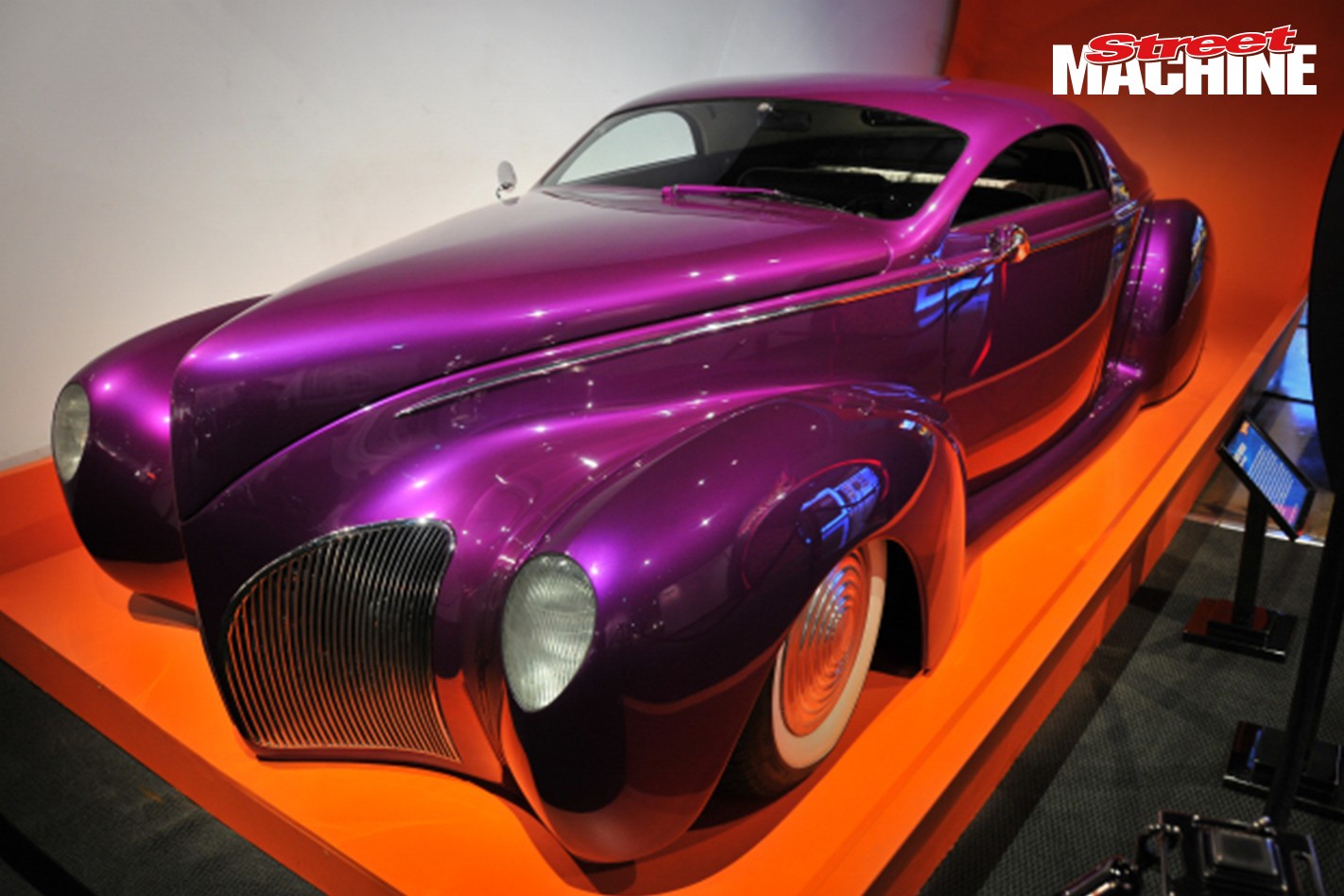 The Zephyr shot to fame with Scrape, a wild all-steel custom '39 Lincoln commissioned by former Hot Rod editor Terry Cook. Terry eventually sold it and used the proceeds to create fibreglass replicas of the car

“Candy paint is difficult to lay down, with the Lincoln’s curves and angles making it worse,” Andrew says. Laying the colour took three long days, and included two silver base coats and six layers of gold candy, topped off with clear. “My main painter Chris did an amazing job, though he still whinges about it!” Andrew laughs.

Inside the quality continues. Late-60s Camaro pews look at home amongst the tastefully crafted tan-coloured cabin, with an equal mix of custom-made pieces and off-the-shelf Billet Specialties items. Dash and console are Andrew’s handiwork while Pete at U-Auto Trim It covered the rest.

16
The most familiar of the 'glass replicas in Australia is Ben Gatt's Dumped (left), which was on show with Andrew's Gold Rush (right) at MotorEx 2015

“Pete did a great job and did it in a short time span. I gave him only three weeks to complete the whole trim in time for the 2013 Adelaide Hot Rod Show,” Andrew says.

Originally ’39 Lincoln Zephyrs came with a flathead V12, but this one has an LS1 for hassle-free daily driving. The engine and trans are straight out of a Holden SS ute that Andrew purchased at auction with only 30,000kms on the clock. He bought the ute primarily for the engine, ’box and a few other key pieces. The only enhancements to the otherwise standard Holden driveline are the stainless extractors and 2.5in exhaust, thanks to D&T Exhaust.

16
Under the bonnet is a mostly stock LS1 from a VZ SS ute, though it rumbles nicely thanks to stainless extractors and a 2.5in exhaust

Wiring up the beast and breathing life into the LS1 was a job that fell to good friend and Autotransformers staffer, Michael Ahrens. It wasn’t his only job on the Zephyr, but it was certainly the most time consuming.

Andrew’s plan was always to put some serious miles on this cool custom so it had to stop and turn as well as any daily driver. Deco Rides supplied a Fatman Fabrications Stage IV front end with a power-boosted rack ’n’ pinion set-up, while up the back they’ve gone for a triangulated four-link, and there are airbags all round. Andrew says, “It was good to have some of that hard work already done with the suspension. I used the ’bags provided by Deco, but used a control system from Adelaide-based Pimp Daddy Suspension.”

Sensible planning has seen the build sail smoothly for the most part. Andrew first set up the car with flat purple paint and minimal interior to shake out the bugs, before they stripped it back down again to recreate in golden glistening perfection. Then they got it ready for its first outing.

“My front seats arrived on a Friday arvo and by 5pm Michael and I did a quick trip to the servo,” Andrew says. “Then I drove it straight to a car show in Port Augusta – a 600km round trip. That was its first test drive!  It won a trophy and it never missed a beat.”

16
The interior is decked out with Camaro seats that fit the bill nicely, and the rear pews are custom

This is a testament, not only to Andrew’s work and vision and the quality of the build, but also the efforts of a great team. “I am thankful to everyone at Autotransformers. It’s come together better than I was expecting,” Andrew admits.

The Zephyr also proved its worth at the 2013 Adelaide Hot Rod Show where it took out a swag of top Street category awards, including People’s Choice, which is a trophy that any car builder loves to receive. It’s always cool to get a bit of recognition from the people. 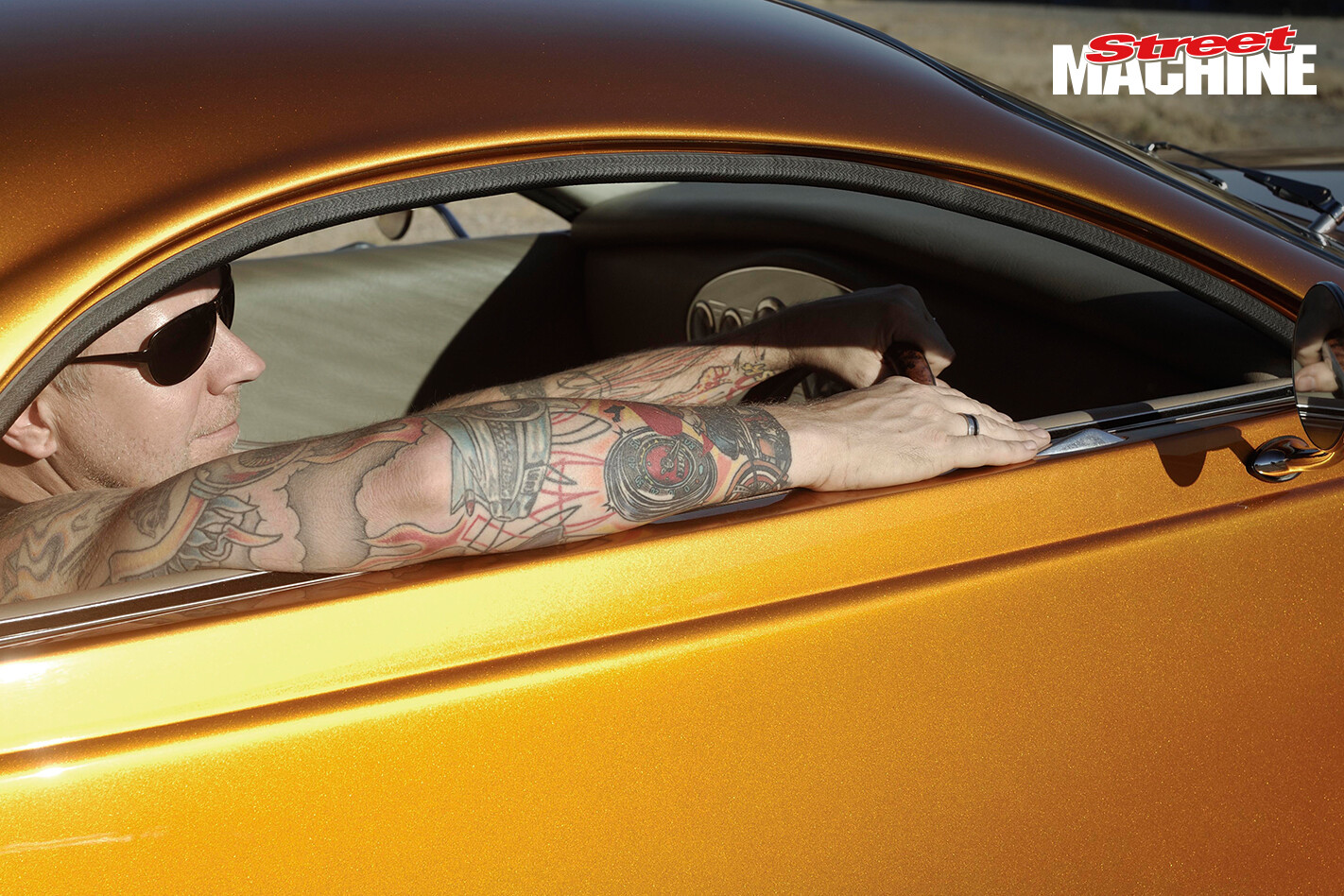 But at the end of the day she’s no show pony. “No one thinks it’s a driver, but that’s what it’s been built for,” Andrew says.