MANY will know the name Tristan Triccas (Tricky to anyone who knows him) from his days at T&M Racing campaigning the IENIL8 Capri – a car that once topped Street Machine’s fastest street car table. So it makes sense he would look to the lightweight Pommy coupe when searching for a Sunday driver. 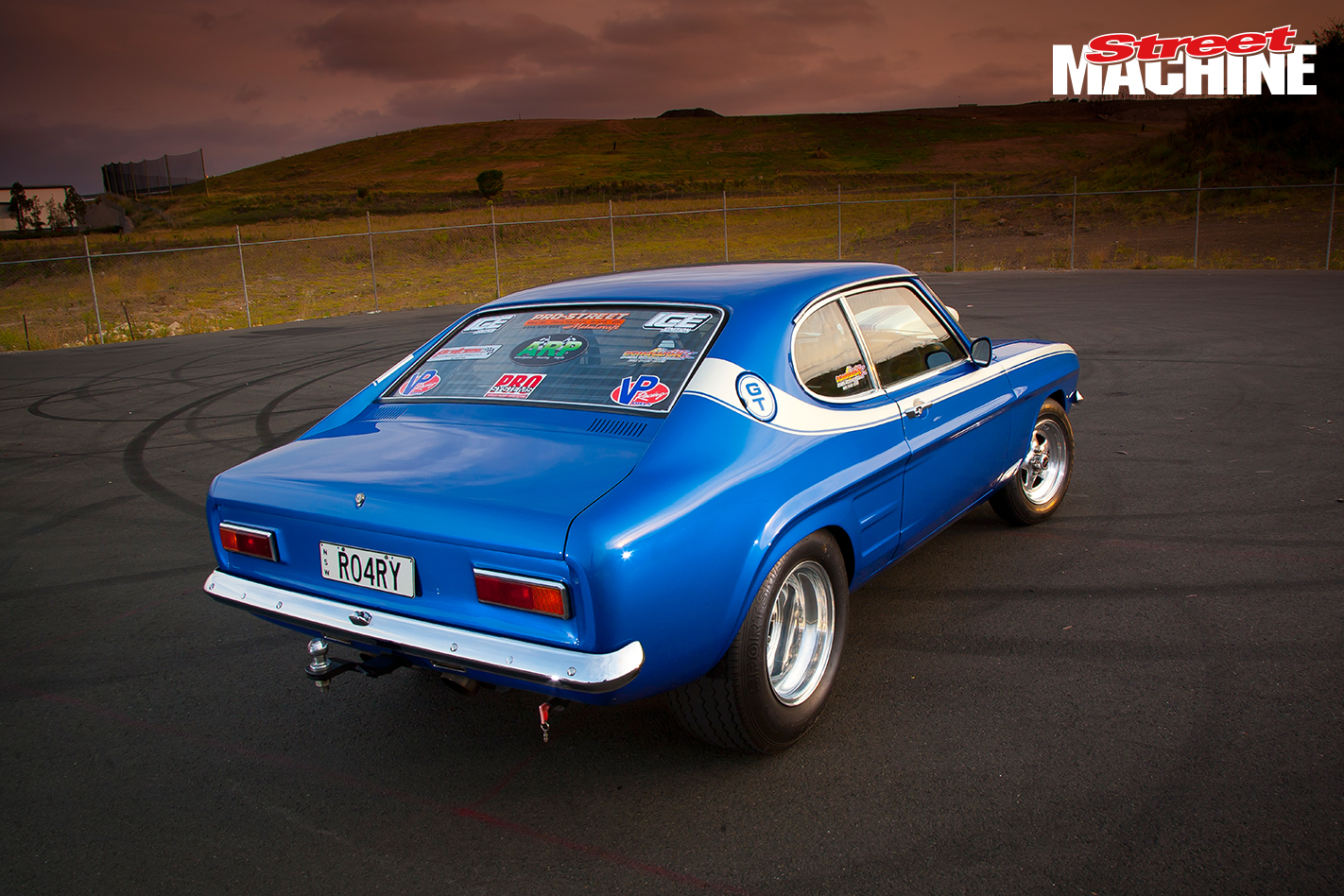 Tristian did a lot of work on the Capri for its previous owner Joe Ora, then he ended up buying it!

“I was looking for good weekend cruiser. Something I could take my wife Jacqui, and kids Ezekiel and Arabella out for a run,” Tricky says. “But originally I was searching for a Mustang.” However he couldn’t refuse when Joe Ora told Tricky he could buy his sweet blue Capri. “I knew the car well,” Tristan says, “Joe had spent three years on a pretty decent build. I’d also done a lot of work on the car over the years – I bought it virtually as is.”

At first Tricky was wondering if he’d overdone it. “It wasn’t very discrete,” he says, “it was in your face and loud!” An outing would leave your ears ringing and young Zeake called out ‘roary’ whenever he heard it coming. That’s where Tricky got the inspiration for the apt RO4RY plates. 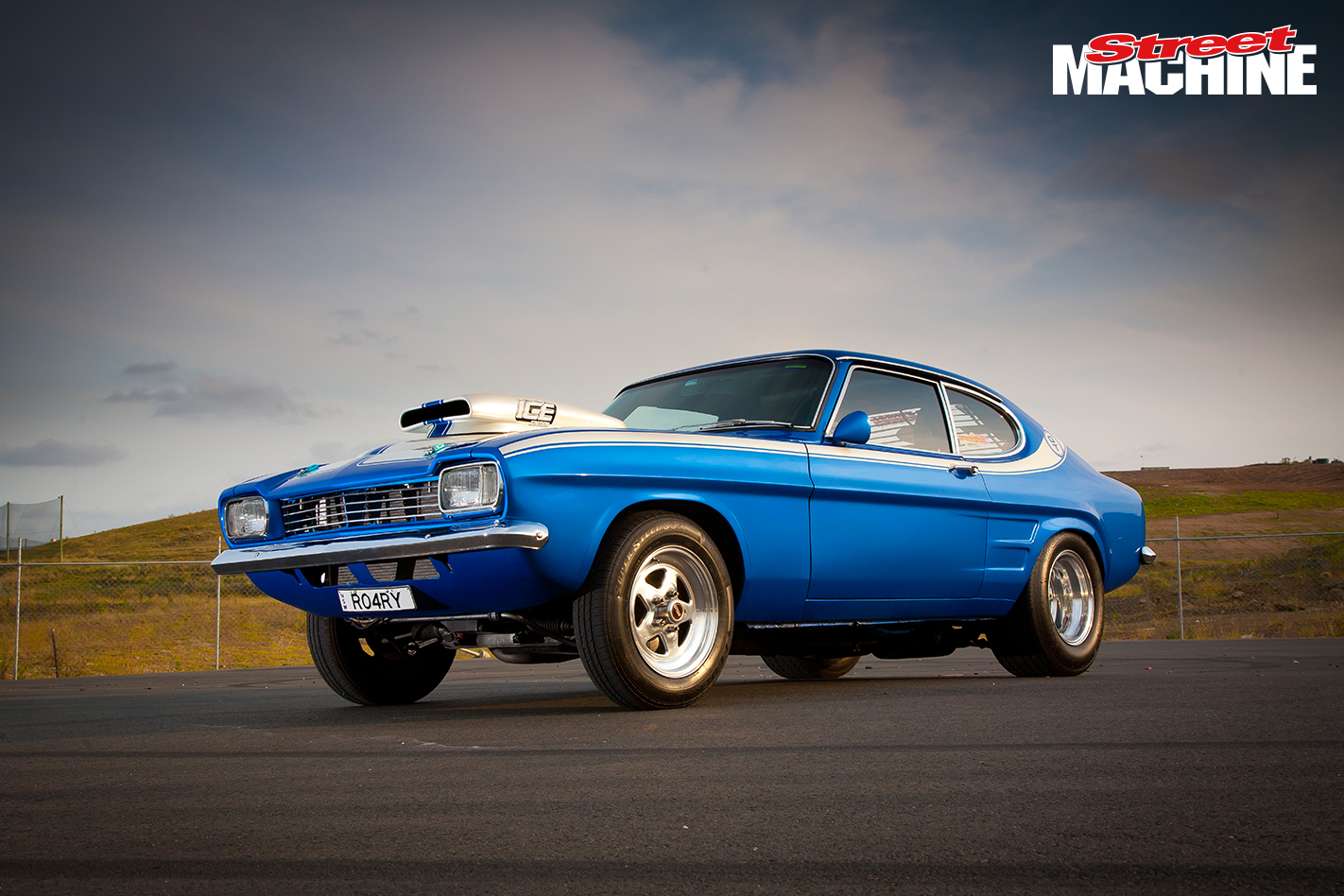 Upon acquiring the car Tristian wanted to make it more streetable, so he upped the horsepower to over 700hp

So how do you make a 650hp street/strip monster more street friendly? Tricky’s unusual solution called for pulling the engine, extensively porting the Edelbrock heads, upping the compression ratio, sliding in a bigger cam and topping it off a larger carburettor – which just so happened to bump power output up over 700hp. Sounds like the perfect solution – errrm, not! 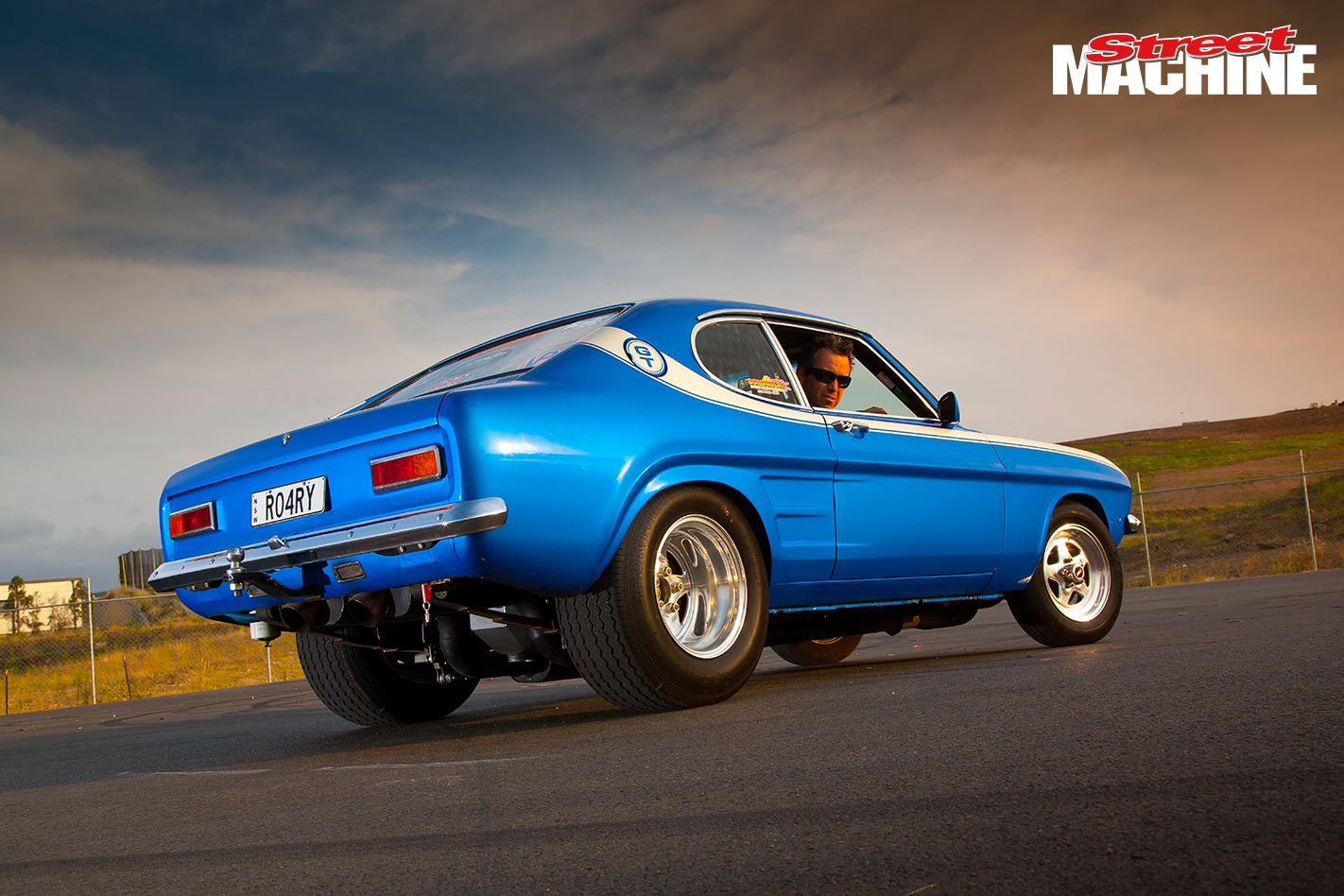 To be fair, four big mufflers – each packed with stainless mesh - were also added, and the already great interior was stripped, and sound-deadening Dynamat was applied everywhere. A heap of other insulation was also added as everything went back together. It would be a stretch to describe it as Lexus quiet, but it’s quiet enough to hold a regular phone conversation via the Bluetooth hands-free function built into the newly-fitted Pioneer CD/tuner. 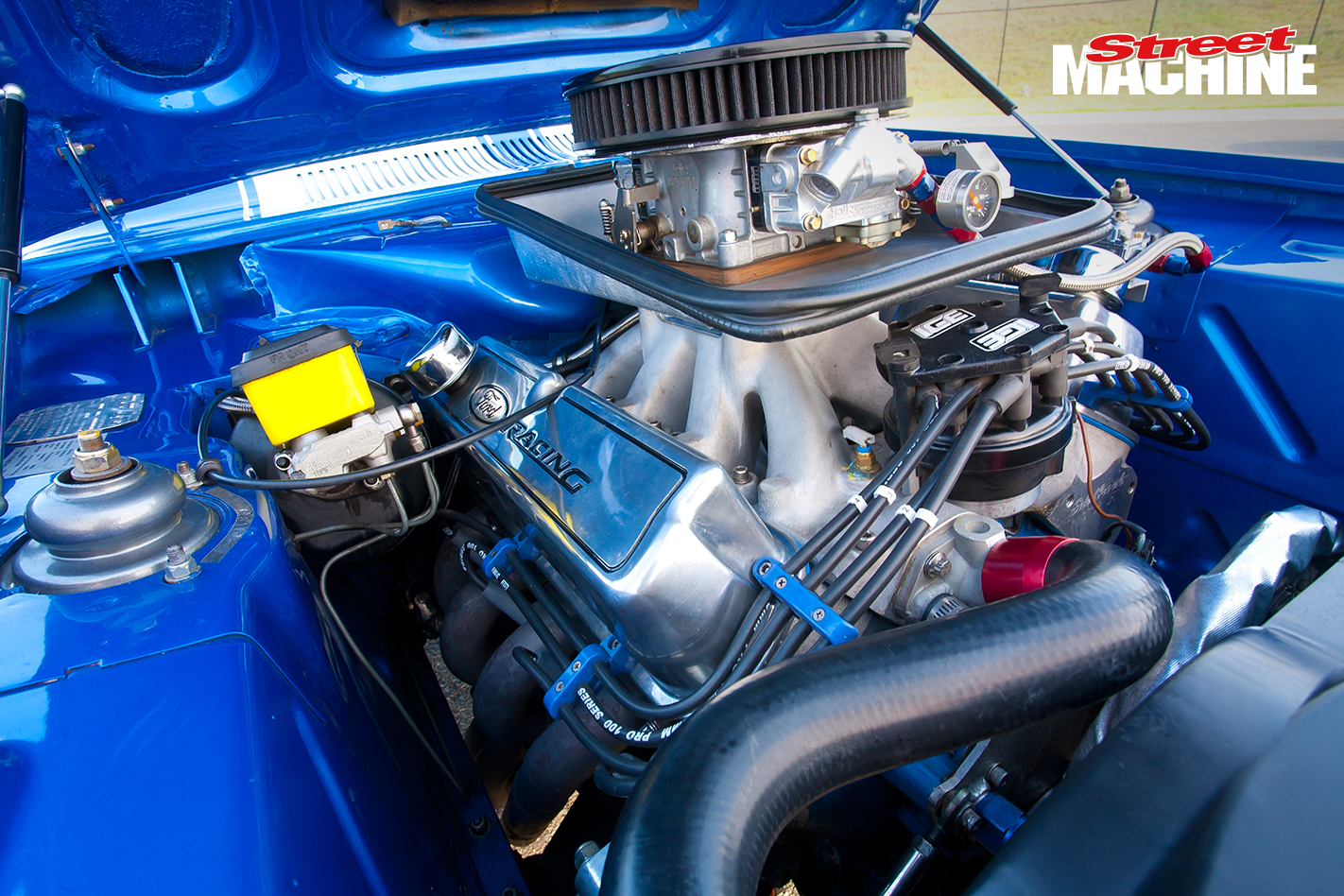 The engine is a 427-cube Windsor making 700+hp. The ICE Timing Control feature allows Tricky to take out timing to allow the engine to live when doing lengthy runway runs

Tricky runs Affordable Race Parts (ARP) and hogged out redesigned ports using his new T-Rex program on his Centroid CNC head porting machine. Those bigger ports and a monstrous carburettor by Patrick at Pro Systems solved the Capri’s insatiable thirst for fossil fuel! Bigger for better economy, who would have thunk, eh?

Sticking with the weekend cruiser philosophy, a Gear Vendors overdrive unit was added behind the trick top-of-the-line C4 by ProTrans and Dominator converter. “I love the overdrive,” says Tricky, “at 110km/h, she purrs along at 2700rpm.” 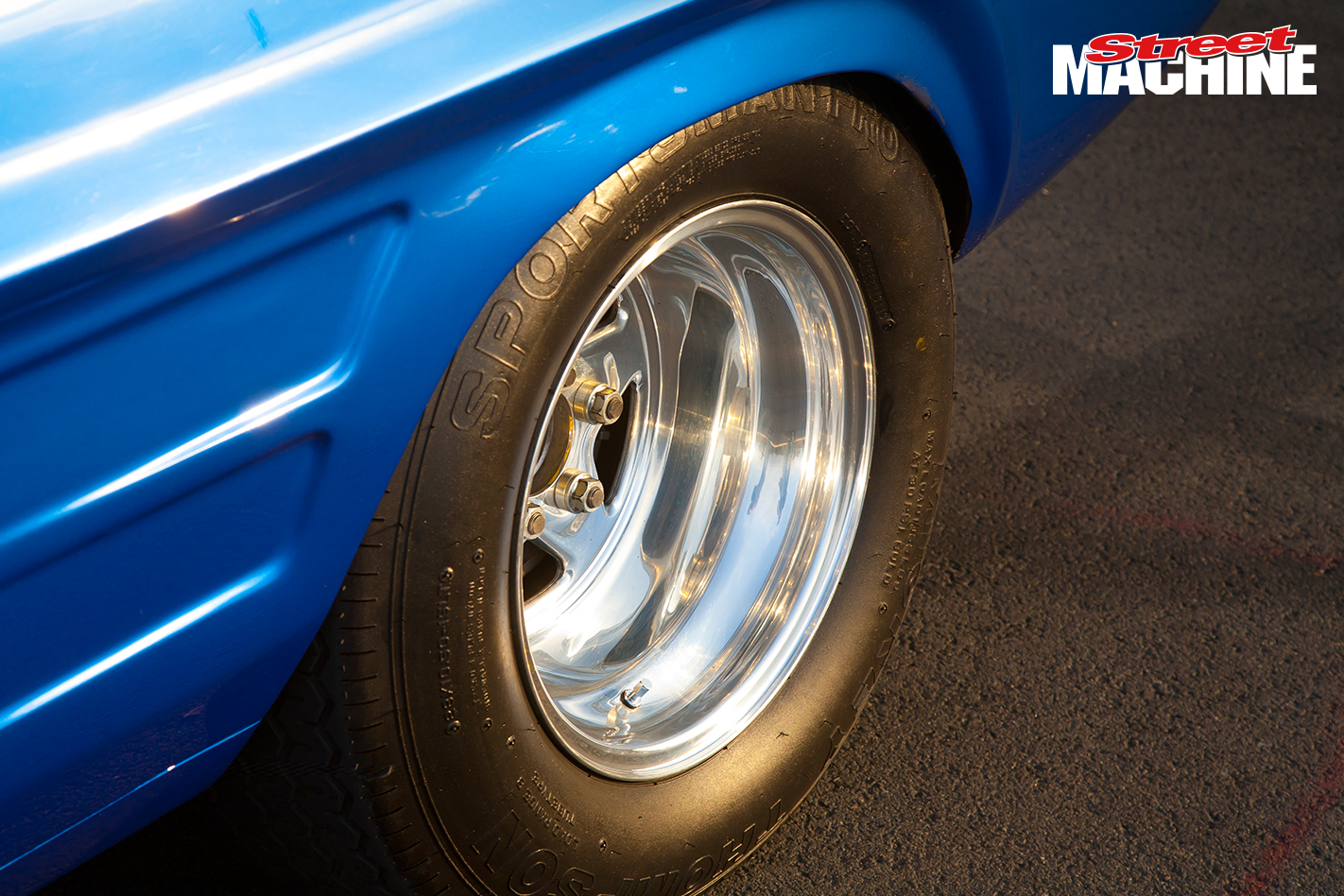 Turning those fat 275-wide Micky Thompson ET Streets (tucked up into the mini-tubbed rear) is a bullet-proof, 35-spline Mark Williams 9-inch by Craft Differentials – which is connected to the C4 via a beefy tailshaft by Sydney Drivelines.

The classy blue hue is a factory WRX colour and was laid on 10 years ago – Joe picked the colour himself. He also designed the kick-ass side stripe because he didn’t like any of the Capri’s factory schemes. 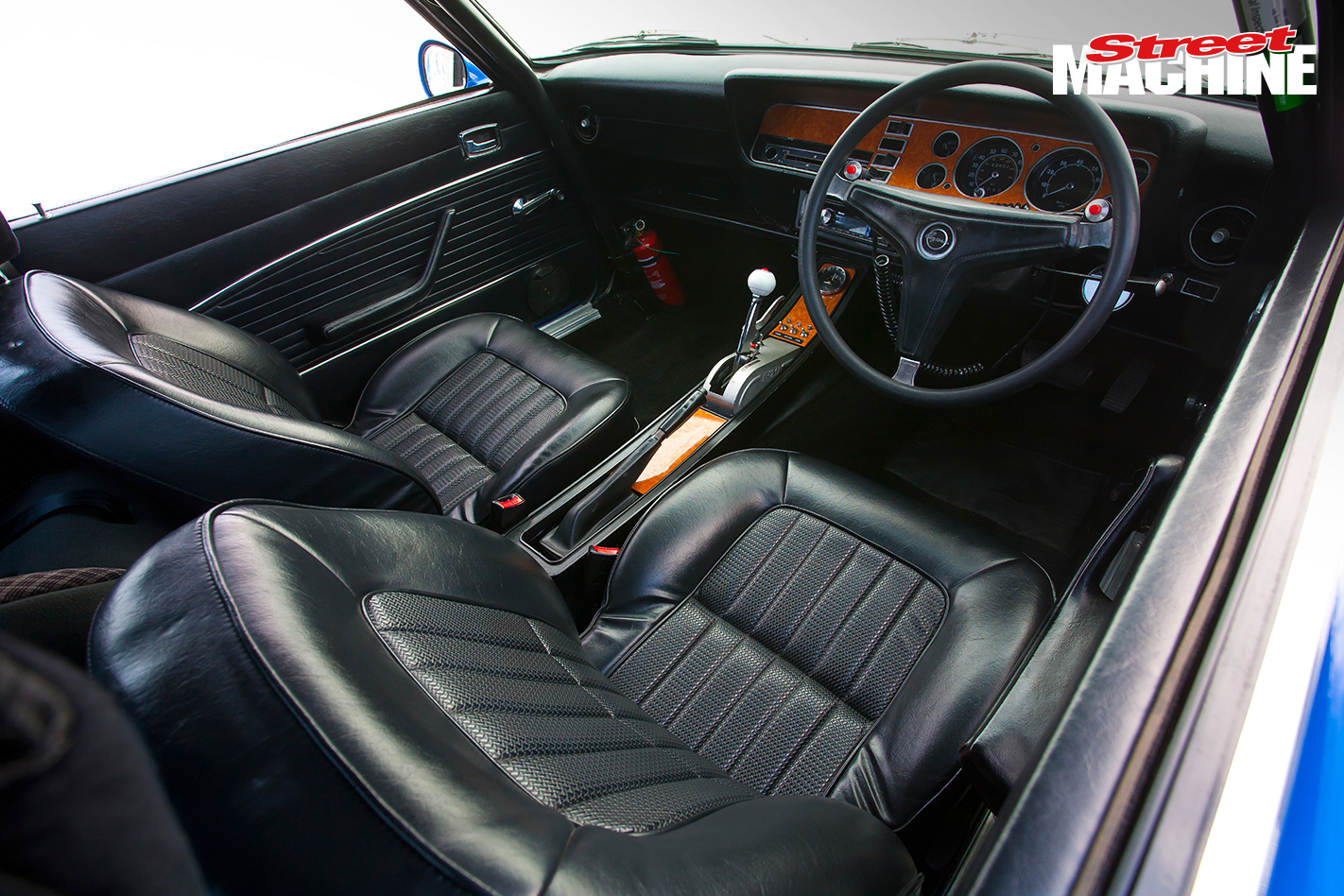 The interior is all mostly factory-spec apart from the cage, gauges and shifter, and it has been refreshed over the years

The refurbished interior is also past its 10th birthday, although it’s been refurbished somewhat. “None of the factory gauges worked,” Tricky says, “It had aftermarket gauges and a big-arse tacho.” He ditched all that, sourced another factory dash, had it refurbished and pieced it all back together, with lots of help from who he says is the best auto electrician in the world, Yea Paulu. “More room, more visibility, more everything,” says Tricky. Future upgrades include AC and cruise control.

The interior’s biggest departure from the street theme is the Pete Cleary six-point roll cage, because Tricky loves entering his mighty Capri in all manner of motorsport events – and has kicked some highly fancied butt in the process! 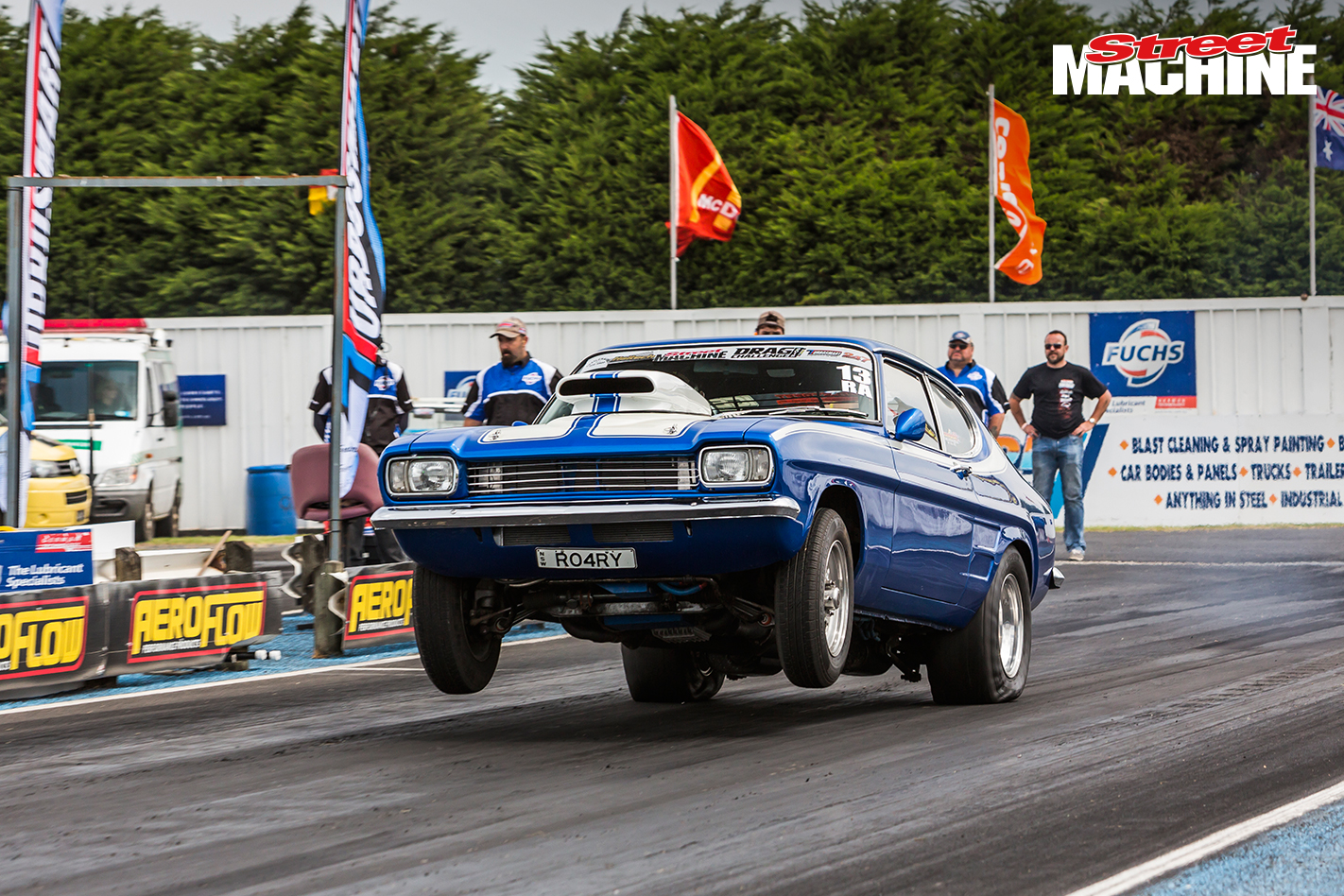 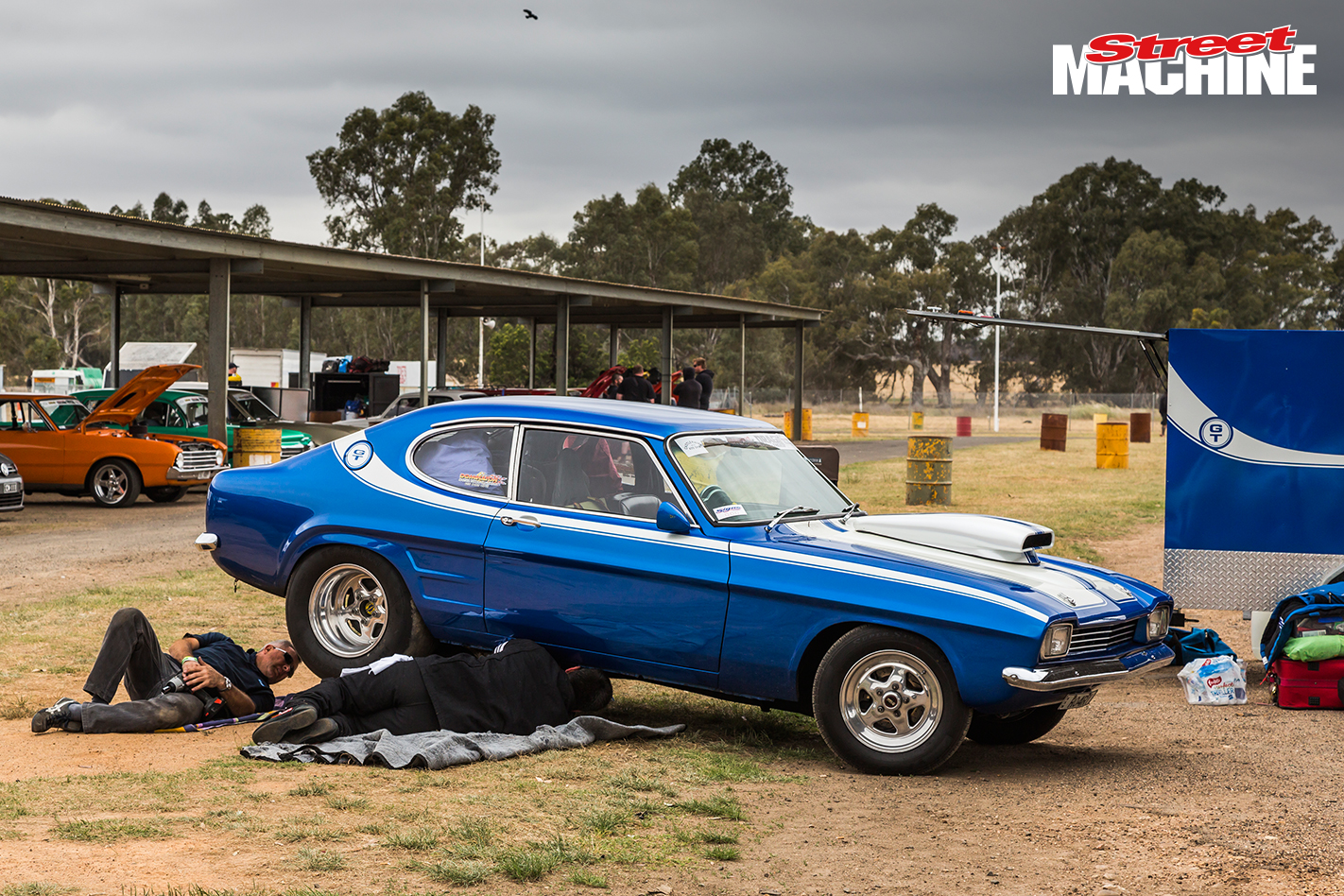 It’s also had a fair bit of success at the strip. Not only has the Capri complete two Drag Challenges – winning Radial Aspirated in 2014 and runner up in the same class for 2015 - it’s run 9.5@142mph in aspirated form and 8.76@158mph with a shot of giggle gas. Talk about versatile! Tricky swaps the 3.55 street gears for 4.56s, empties out the PULP, tops it up with MS109 from VP Racing Fuels and off he goes. 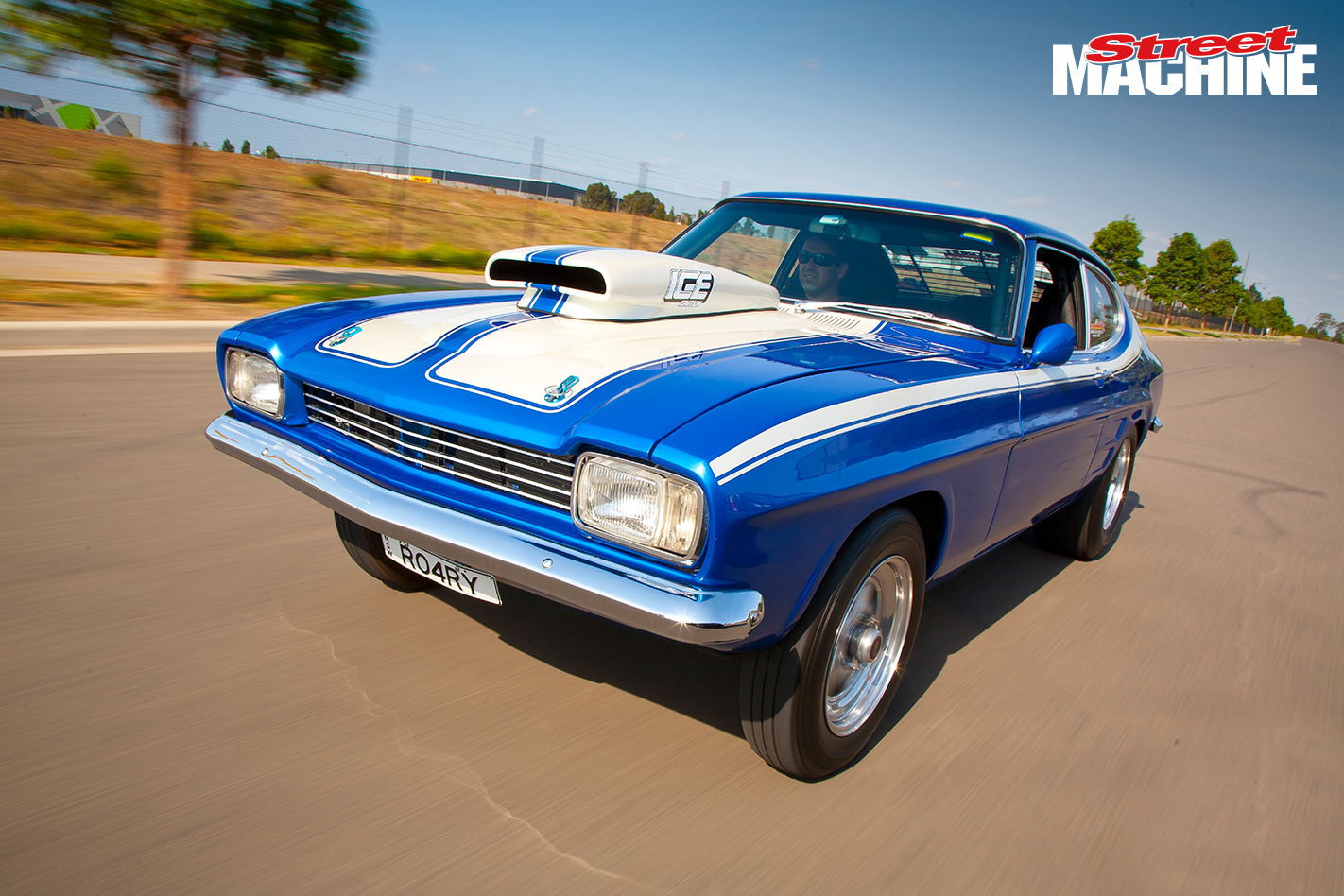 As well as sorting the rear shocks, Con from Pro Street Metalcraft fabricated the trick parachute mount – which doubles as a tow bar. For race meets, Tricky has a Go-Kart trailer he drags along. At the track, he unbolts the towbar tongue and bolts the parachute in its place.

One of the keys to being able to run hard on the loud pedal for 20 seconds and more is the ICE Timing Control system. On the speed runs, Tricky can knock a bit of timing out as the speeds ramp up. At the strip he can do the same through the top end. And it also allows the 427 Windsor to happily run on 98 pump fuel. “It’s a great system, I love it,” says Tricky. 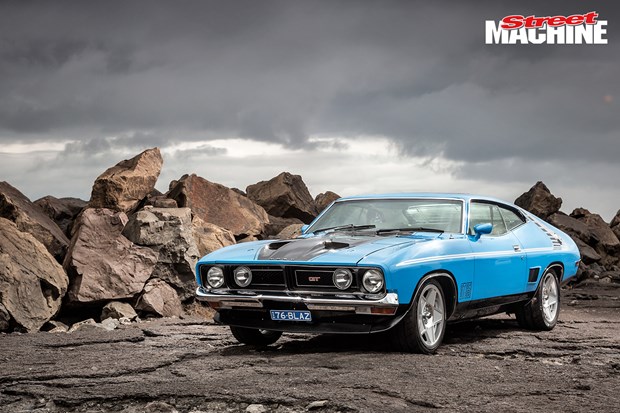 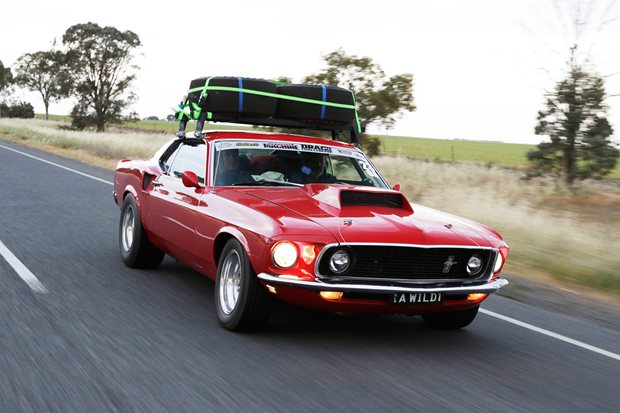 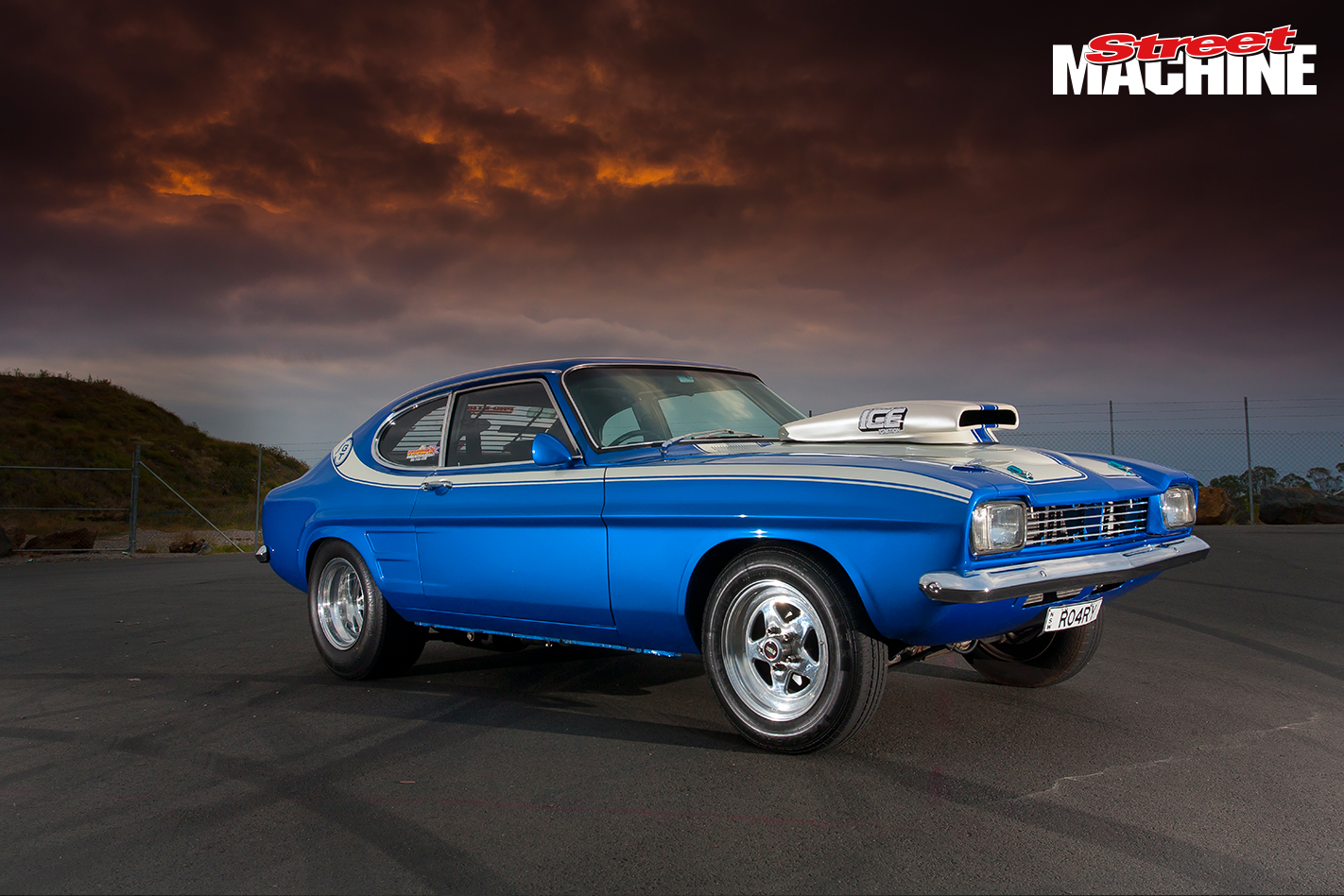 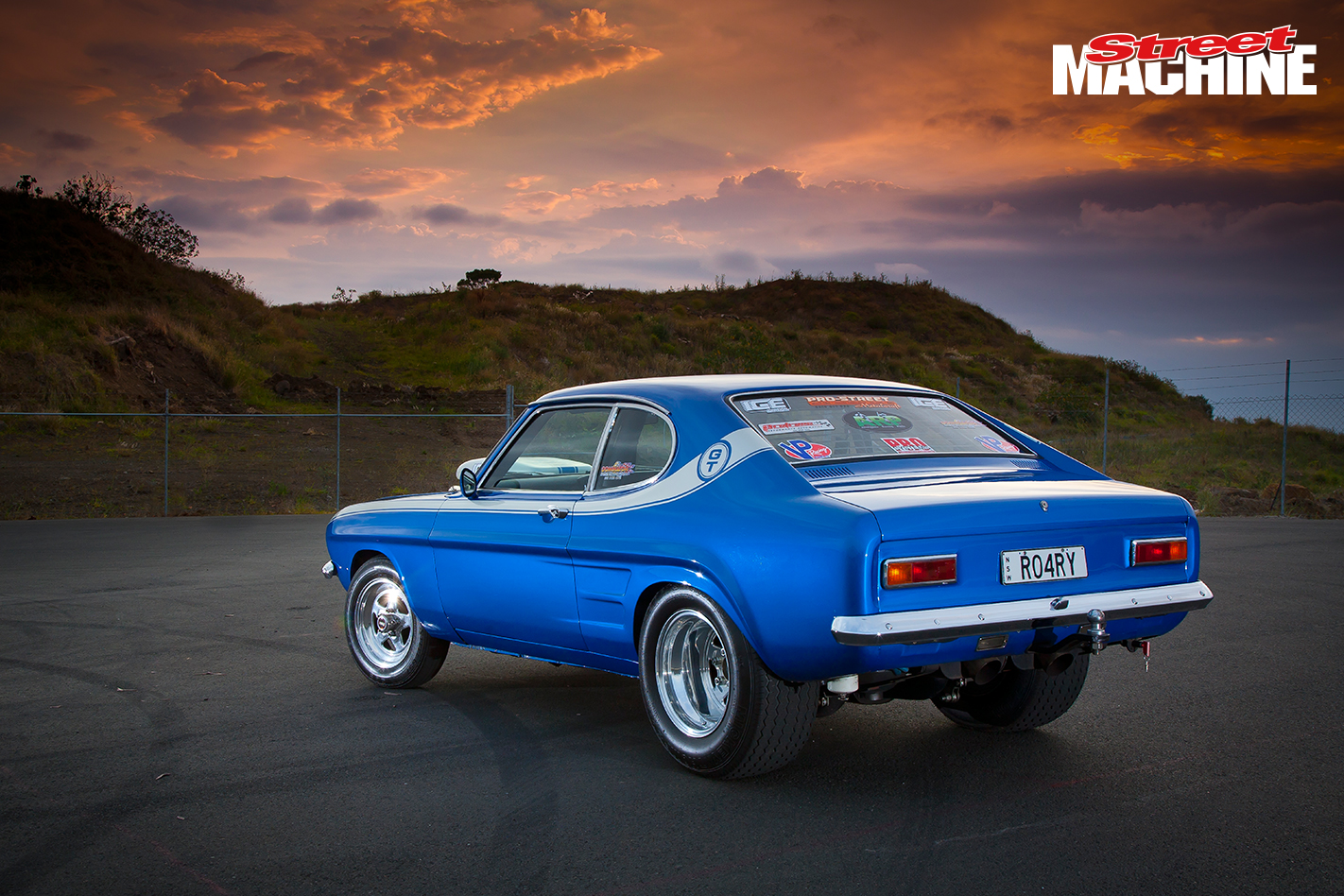 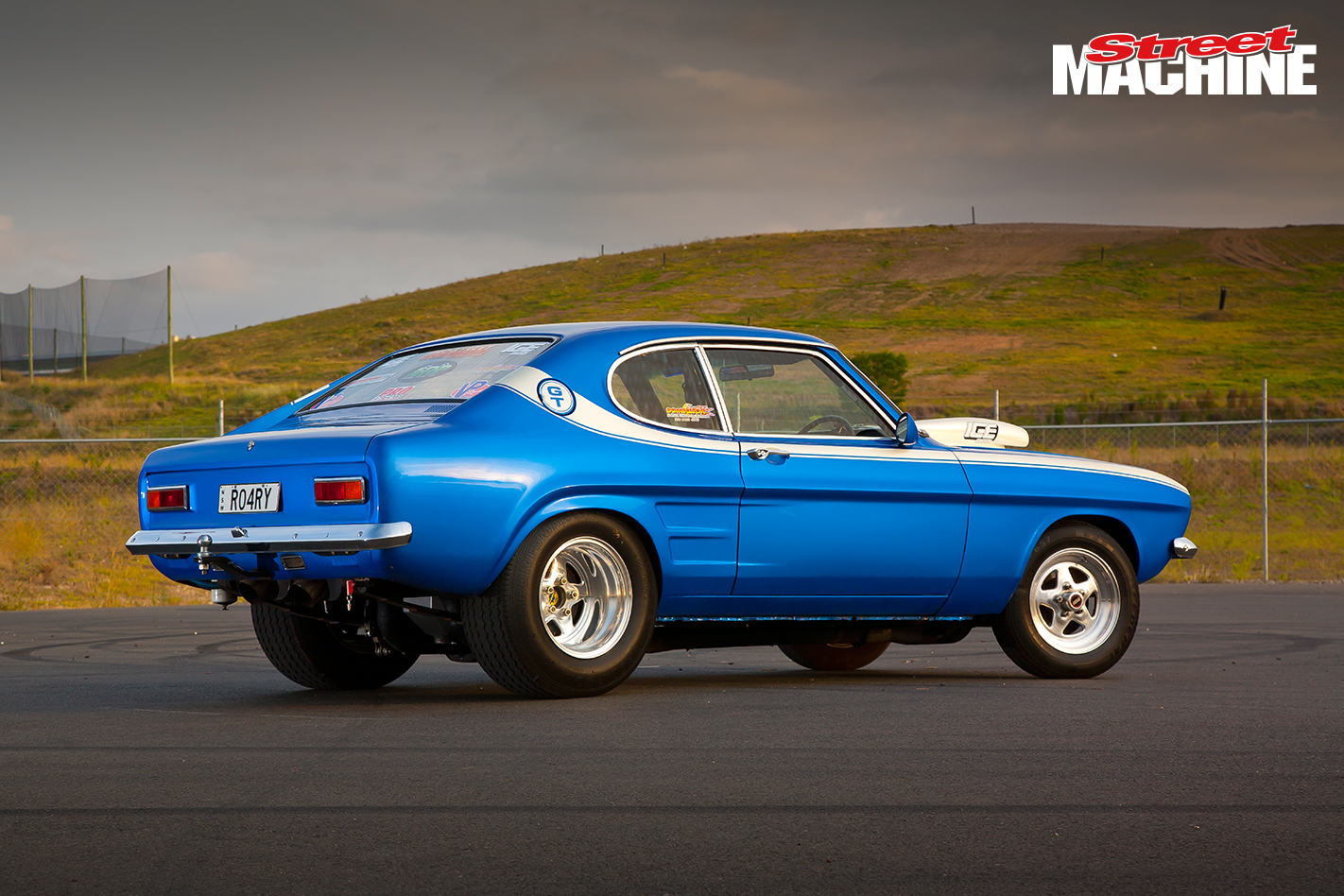 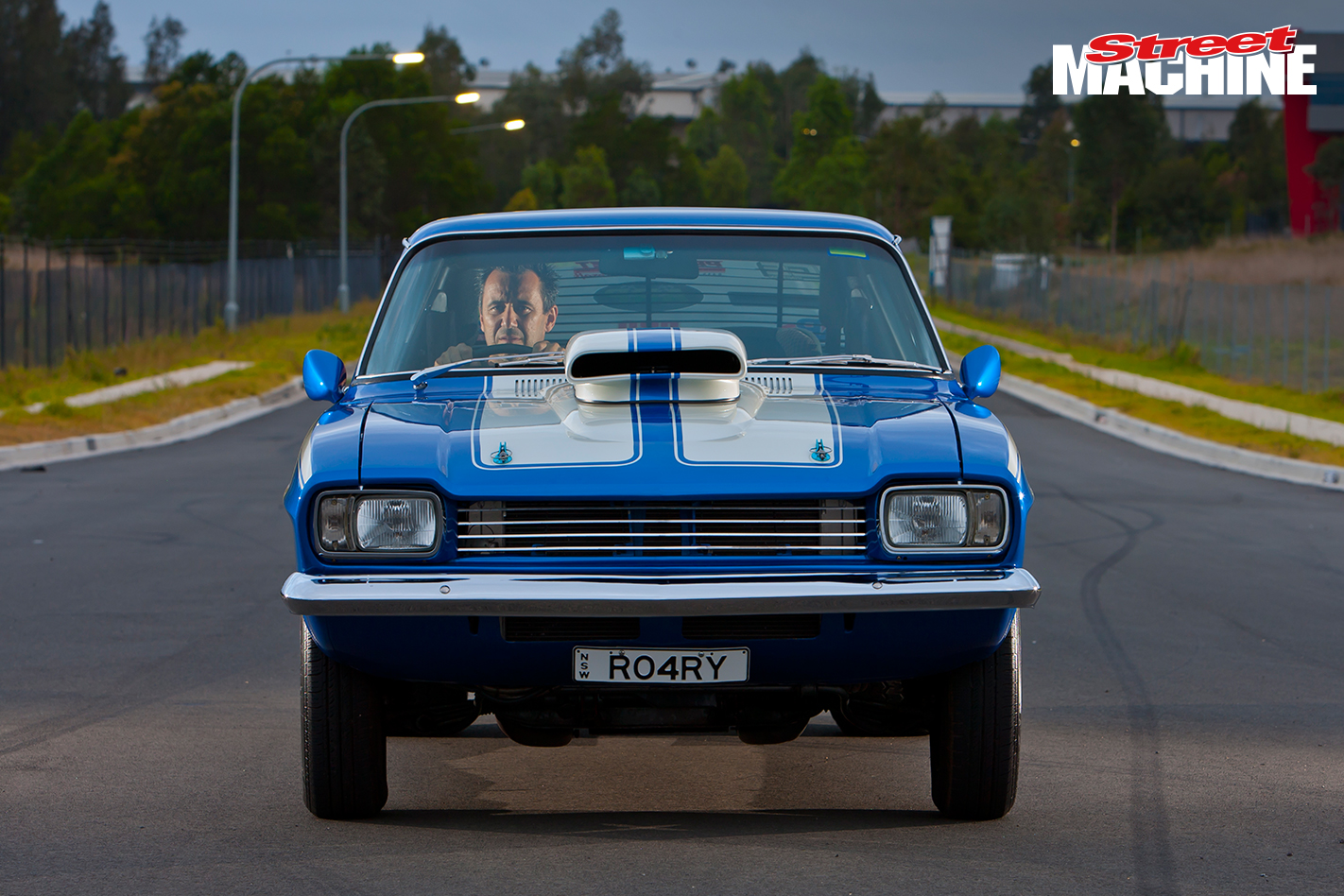 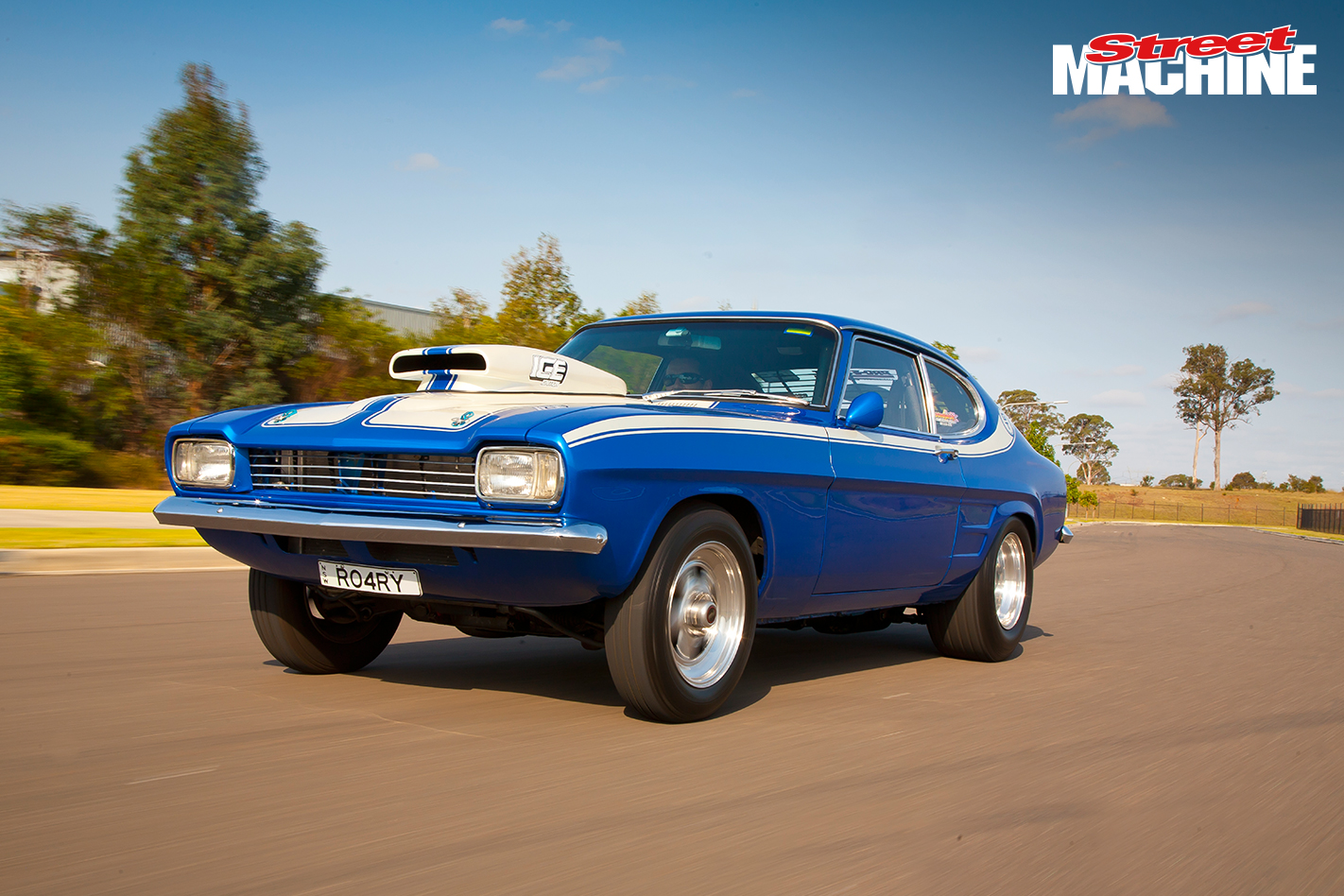 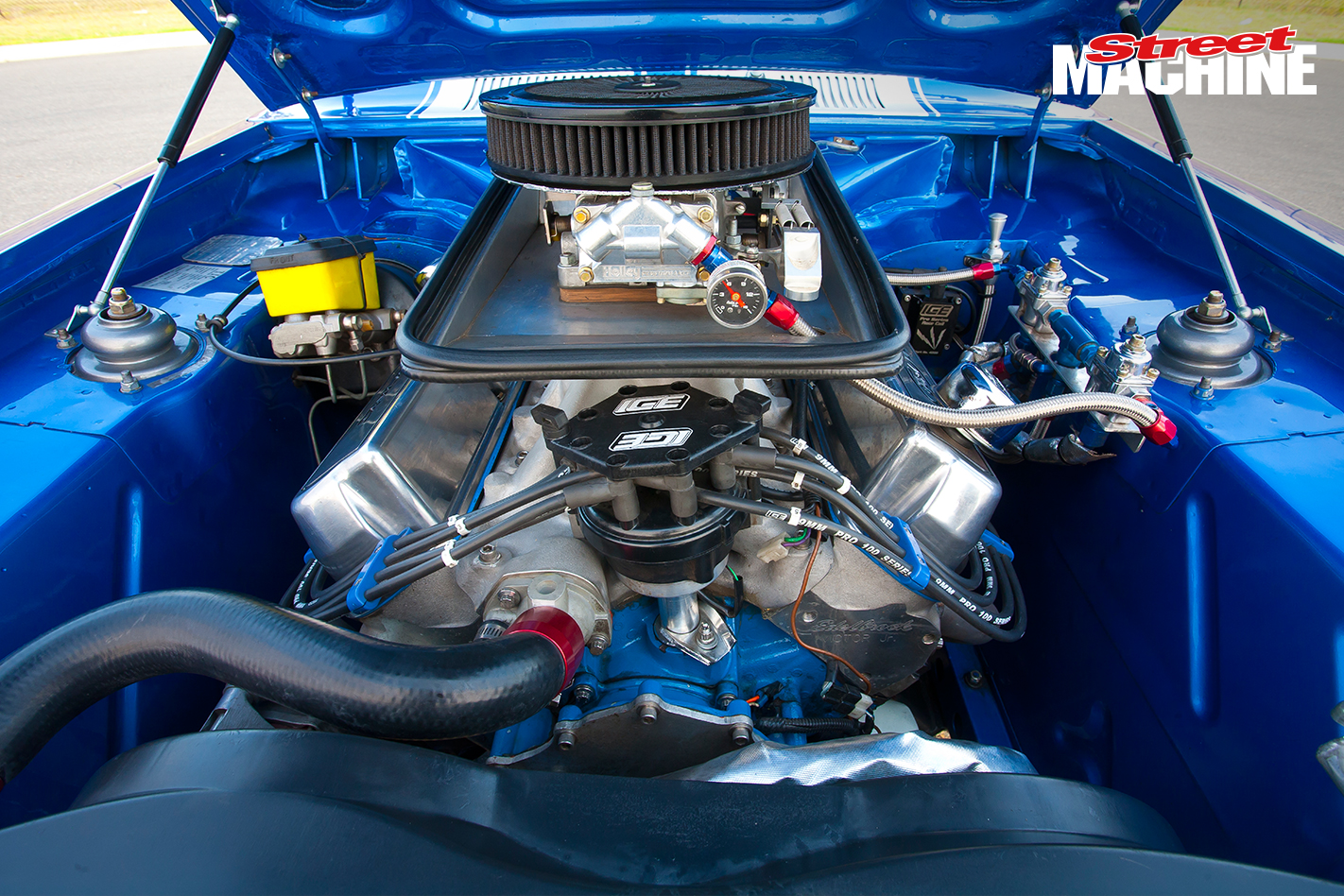 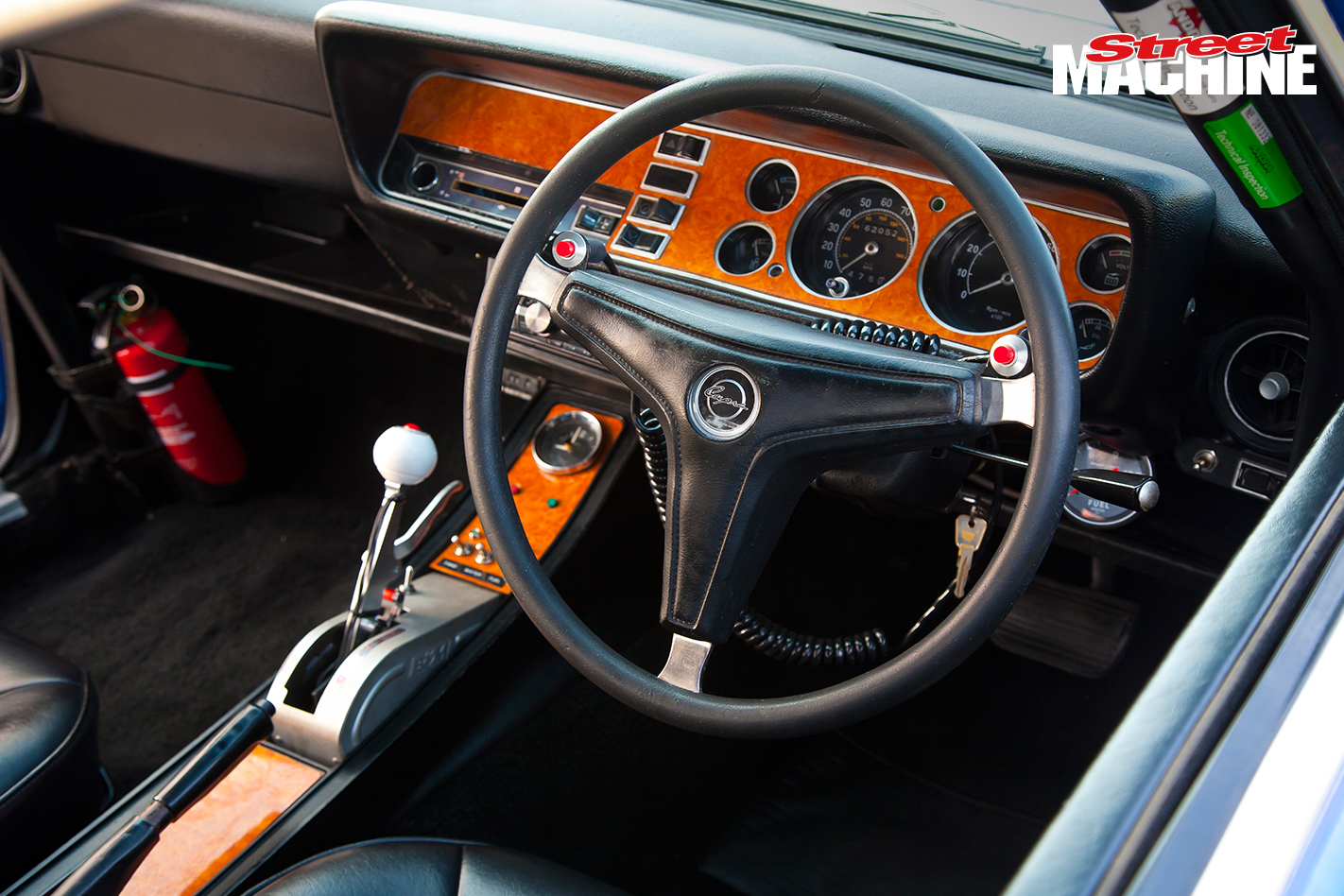 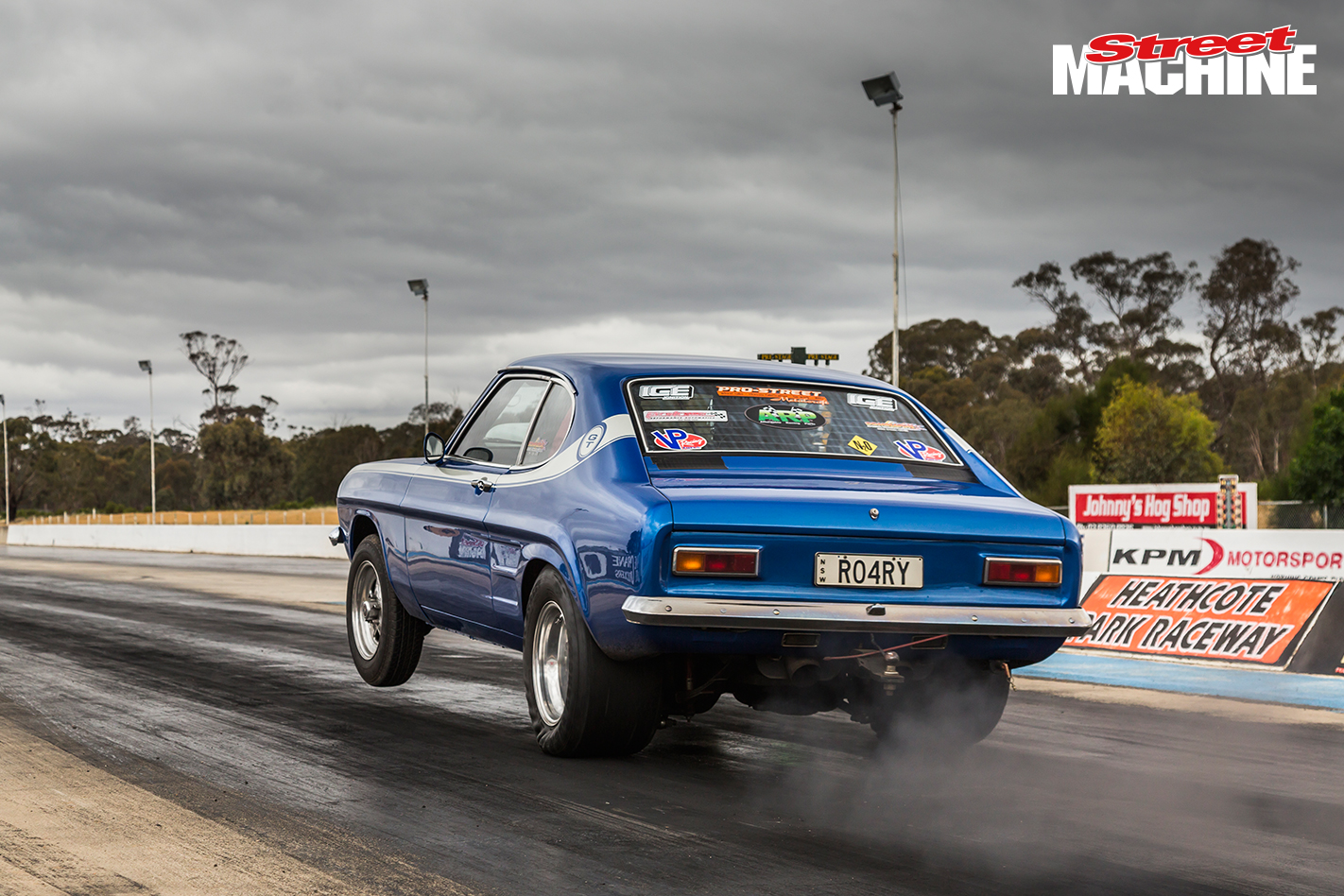