THE PLAN was always to do just one show, then drive it home,” Paul Bennett says. “It’s my selfish car.”

The words carry the confidence of someone who has been planning the build for a large chunk of his life. “I’ve been crafting cars for others for more than 30 years. I’ve just turned 50 and I’m a workaholic. But I’ve started on my bucket list with this.”

There’s far more to this astonishing street machine than meets the eye. Debuted at MotorEx in 2012, the car was an on-and-off project for more than a decade.

Finding and buying a Goliath in the first place is a good yarn. Paul had just moved to Kurrajong on Sydney’s far western outskirts, and while settling into the area he went exploring.

“I saw it in a paddock,” he says. “There were three under a tree — a coupe, wagon and a sedan. The tailgate was open so the yard ducks could roost in it.

“There was something about them that kept drawing me back. I knocked on the door but the mother was very hesitant about selling for sentimental reasons — they’d driven their kids to school in it.

“She called it Golliwog; it was black and red. Her husband was a tech teacher. He overheard some students talking about Paul Bennett and it was too much of a coincidence for him. He asked the students, they convinced him that this Paul bloke was going to do something good with the car. So they relented and sold them to me.”

Of the three wrecks, Paul’s focus was the wagon and I had the sordid pleasure of helping him remove the engine, then gas-axe the chassis of this rare oddity in preparation for its rebuild.

Back then, Paul reckoned it would take three years — “I thought I’d give myself a week off every couple of months to work on it.”

It was a sensible target. The gutting took a few hours, another week or two of between-job efforts had the basics of the chassis and some initial work on the body done.

The car isn’t much larger than a classic Mini or VW, which threw up all sorts of challenges. Paul had to work hard to make everything fit within such tight confines, including bulky essentials (batteries, brake system and fuel tank) plus a stack of trinkets such as a reversing camera, electric windows, solenoid-actuated door latches, cruise control, sat nav and more large hardware like the airbag suspension system and air conditioning.

“Every square inch of this car has something in it,” Paul explains. “Every inch has been redone. It’s so small I had to use every nook and cranny.”

The depth of the chassis rails was a bonus — the voids between and outboard of them hide brake parts under the driver’s seat, and airbag gear under the passenger. Nothing hangs below the sills and Paul even used the rails themselves — one is a supplementary air tank for the suspension, the other runs coolant lines for the heater in the trailer.

As much as space, weight was important in the midget machine and the result of Paul’s close attention to detail is 50/50 front to rear weight distribution in a car that just nudges 1170kg.

Amazingly, most of that was done in 1999/2000. Then the Goliath was wheeled out of the way for a while, while Paul got on with some paid work – and building his stunning Willys (SM, Apr ’07).

Around a year ago, Paul woke up one day with that creeping feeling that it was more than a decade since he’d started building the Goliath. Sure, the chassis, suspension and much of the bodywork had been done, but a non-negotiable deadline was looming.

“I wanted it completed by my 50th birthday,” he says. On top of that, he wanted to show it off at MotorEx.

“Between customer builds, I put in a fair bit of effort in the last year. Then I closed the doors of the workshop for the last eight or nine weeks and we got stuck in.”

The whole interior was sculpted from steel. Everything was outlined using 20mm tube and then sheeted to the tubing’s shape, from dash to tailgate. It was designed to be installed in sections and everything comes out that way for easy servicing.

The headlining is fibreglass. “Steel is too heavy,” Paul says. The outside of the roof served as the buck for the headlining. It was laid-up, quartered and stitched together with a fillet removed so it fits inside and is stiff enough to span the cabin edge-to-edge.

The dash is Dakota Digital and all minor controls — wipers, washers, ignition and lights — drop down from under the steering column. The major electrics live on a panel with an extra metre of wiring behind it so it can be placed on the driver’s seat for easy diagnostics.

Trim on the seats is leather but despite appearances, most of the interior is painted.

“We had blokes at MotorEx asking how we got the leather into the car without any seams. People were discussing it — ‘Wow, good job, you’ve stretched it really well!’ When I explained that it’s all painted, they thought that I must be taking the piss.”

All the badges were laser cut from aluminium then polished, as were the ovals on the seats. Eight downlights add vibrancy to the cabin.

Inspired by a Splice pine-lime ice-block, the colour is a DeBeer blend that Paul spritzed up with plenty of platinum and gold pearl. “I wanted to get a sunshiny, warm summery highlight in it.”

That summery feel-good stuff was also the basis for Paul’s display.

“I saw a bloke at The Entrance demonstrating surfboard shaping. That gave me the idea to curve the surfboard to exactly match the shape of the roof.”

So he filled a garbage bag with expanding foam, hand-moulded it then speed-filed the board to mirror the car’s turret, before fibreglassing it.

The Goliath is powered by a Toyota 4.0-litre alloy hemi V8 from a Japanese market Crown.

“These engines were designed to get a two-tonne limo moving. It was ideal. The whole engine only weighs 220kg. No-one puts together an engine like Toyota — I’ll get half a million kays from this.”

Still, it was the project’s single setback. Paul’s apprentice Dan explains: “It hadn’t been started in a while and the carby was dry. We were pumping fuel into it but it wouldn’t fire. Sideshow [the electrician] was tweaking the dizzy and BOOM! it blew up.

“Paul came through the door and said: ‘What was that?’ It sounded like a cannon going off. Sideshow wobbled around, the side of his face black with oil and his hair smouldering. It was like a cartoon! Fuel had trickled into the sump and when Sideshow turned the dizzy, it sparked.”

The sump was blown into a globe-like shape but that was the extent of the damage. “It could have been enormous,” Paul says. “We’d just painted the whole car but it didn’t even damage the crossmember.”

Apart from the sump replacement and some minor fiddles, the engine hasn’t been opened. The EFI was replaced with a carby and the Crown’s auto was ditched for a Supra five-speed. Under the rear is a sheet-metal nine-inch, while the narrow nose is chock full of radiator. Vented by a thermo fan, it’s from a Corvette and should have no trouble keeping the baby Toyota V8 cool, even towing.

“You will never see this car without the trailer,” Paul says. “It’s a Pro Touring touring package.”

At MotorEx, the Goliath landed gold medals for Overall Innovation, Impact and Display, Bodywork, and Best of Breed — Street Machine.

But that’s not why he built it; he already has a stack of Elite car builds under his belt.

“This is 100 per cent my style and my soul in this car and I built it purely for me. I don’t care if anyone likes it or hates it but I’m so proud that people seem to enjoy it.” 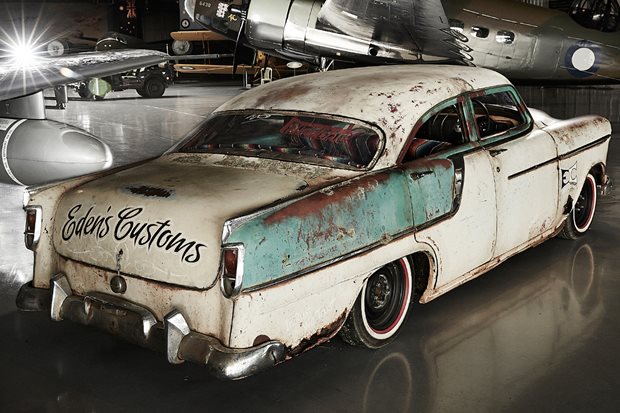 A wild, chopped FC Holden, built for dragging in the dirt and freaking out the squares! 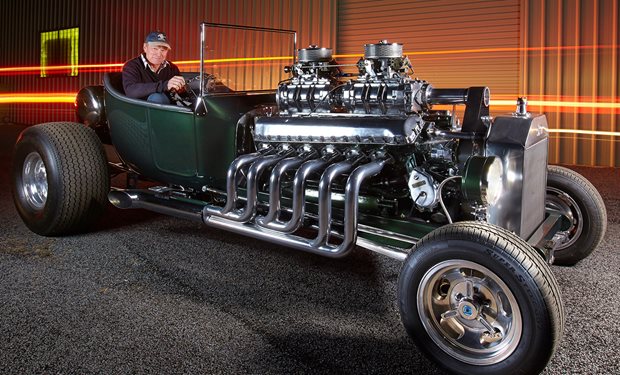 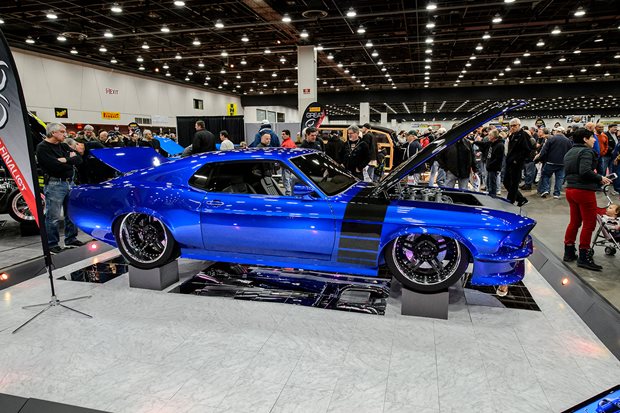 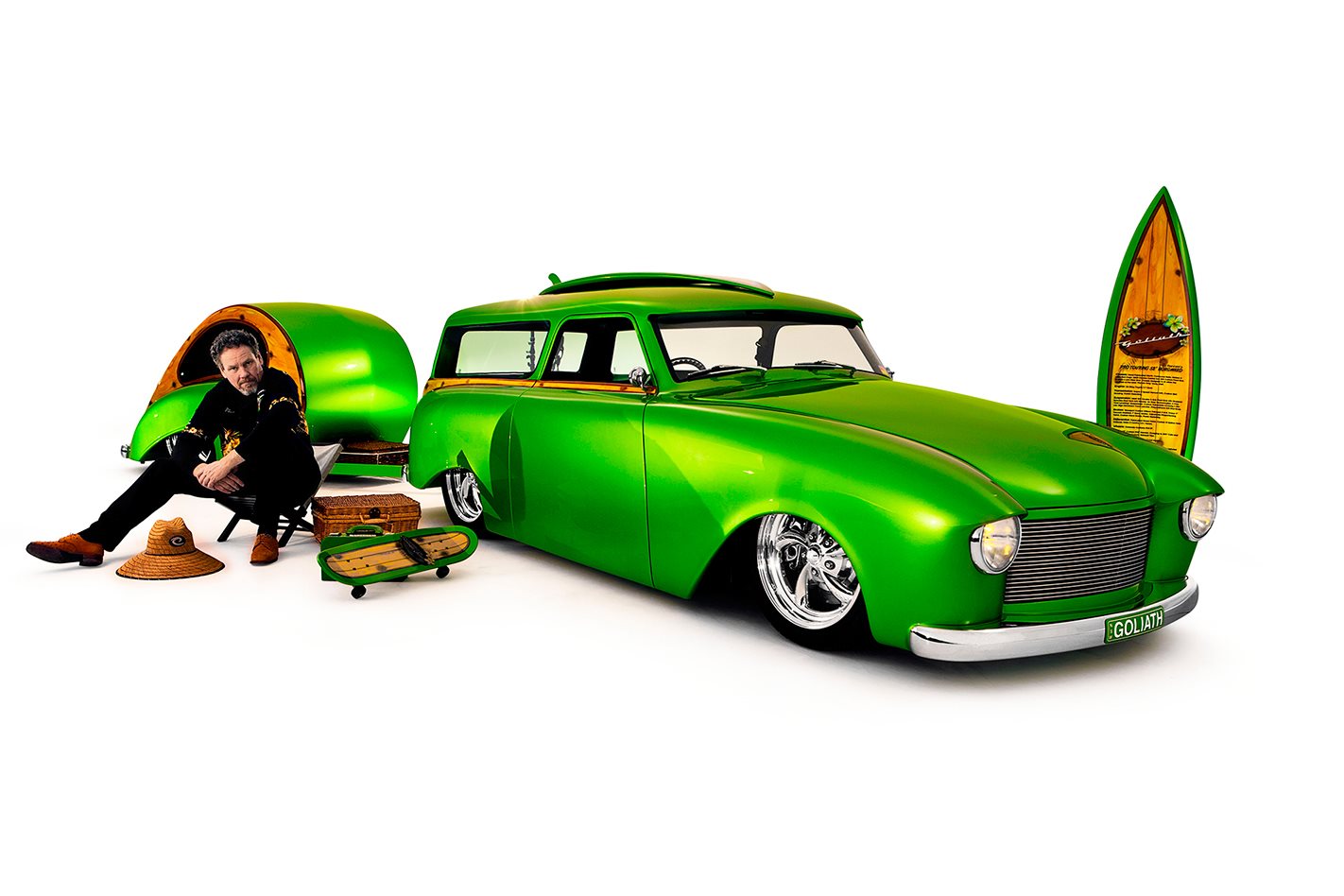 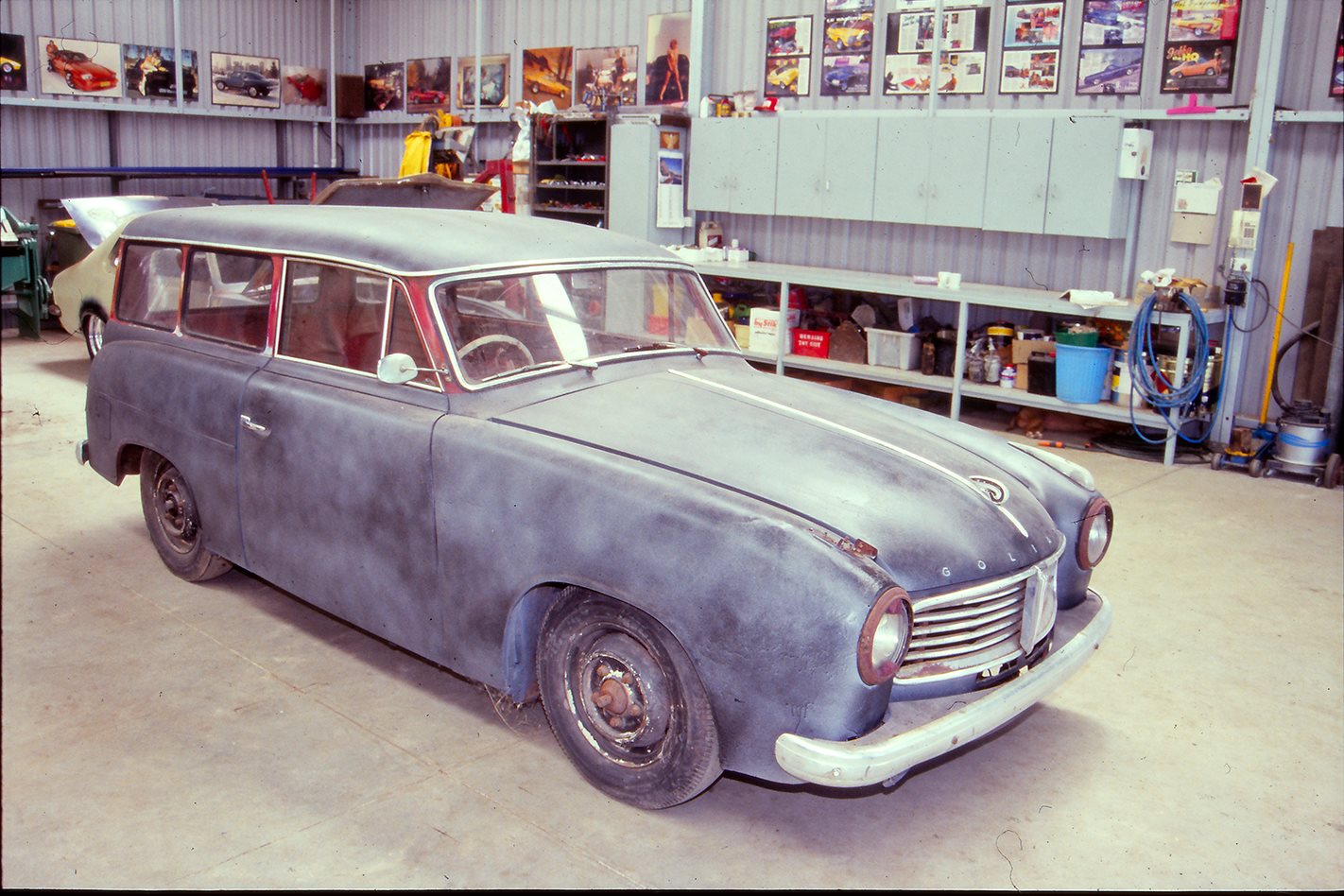 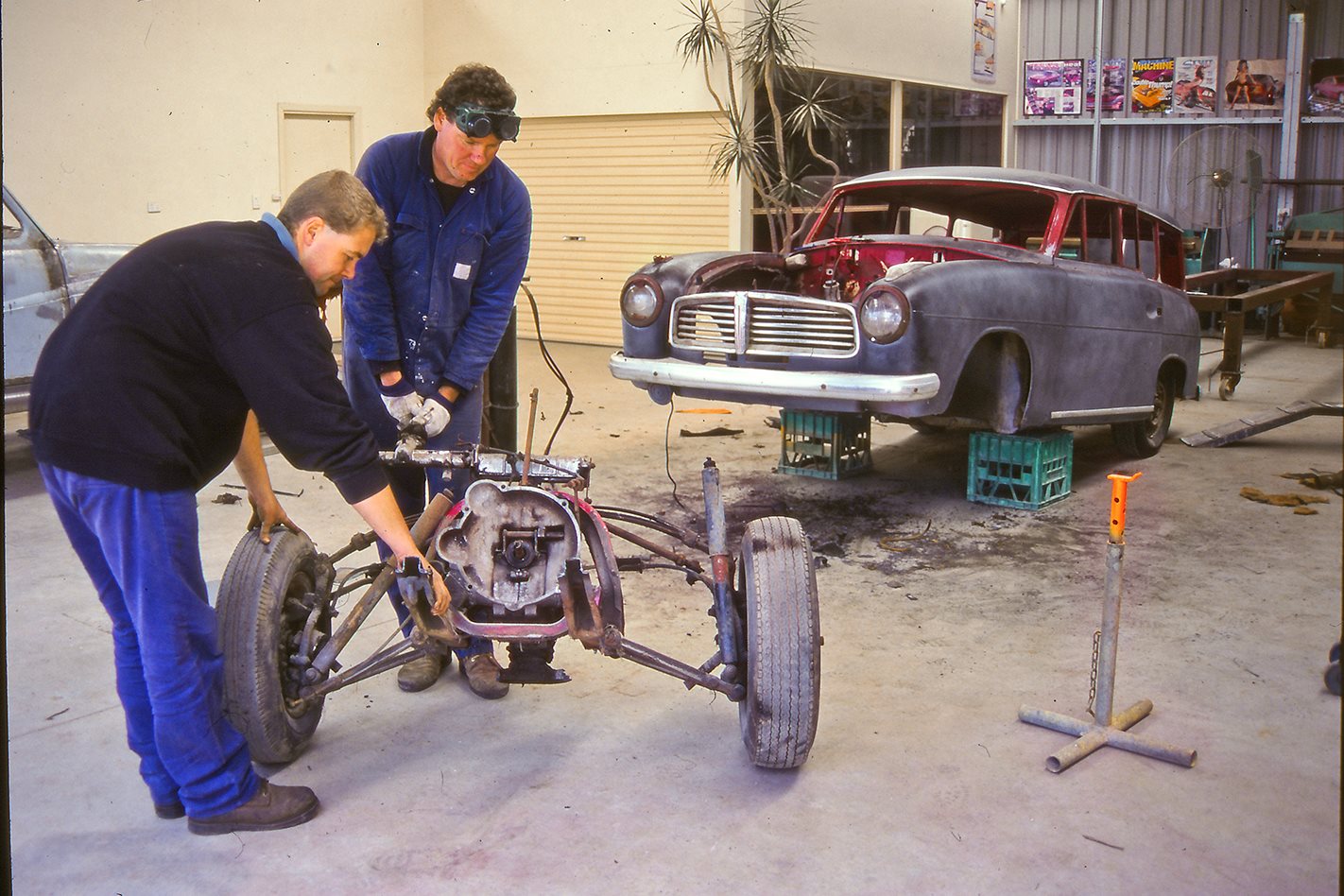 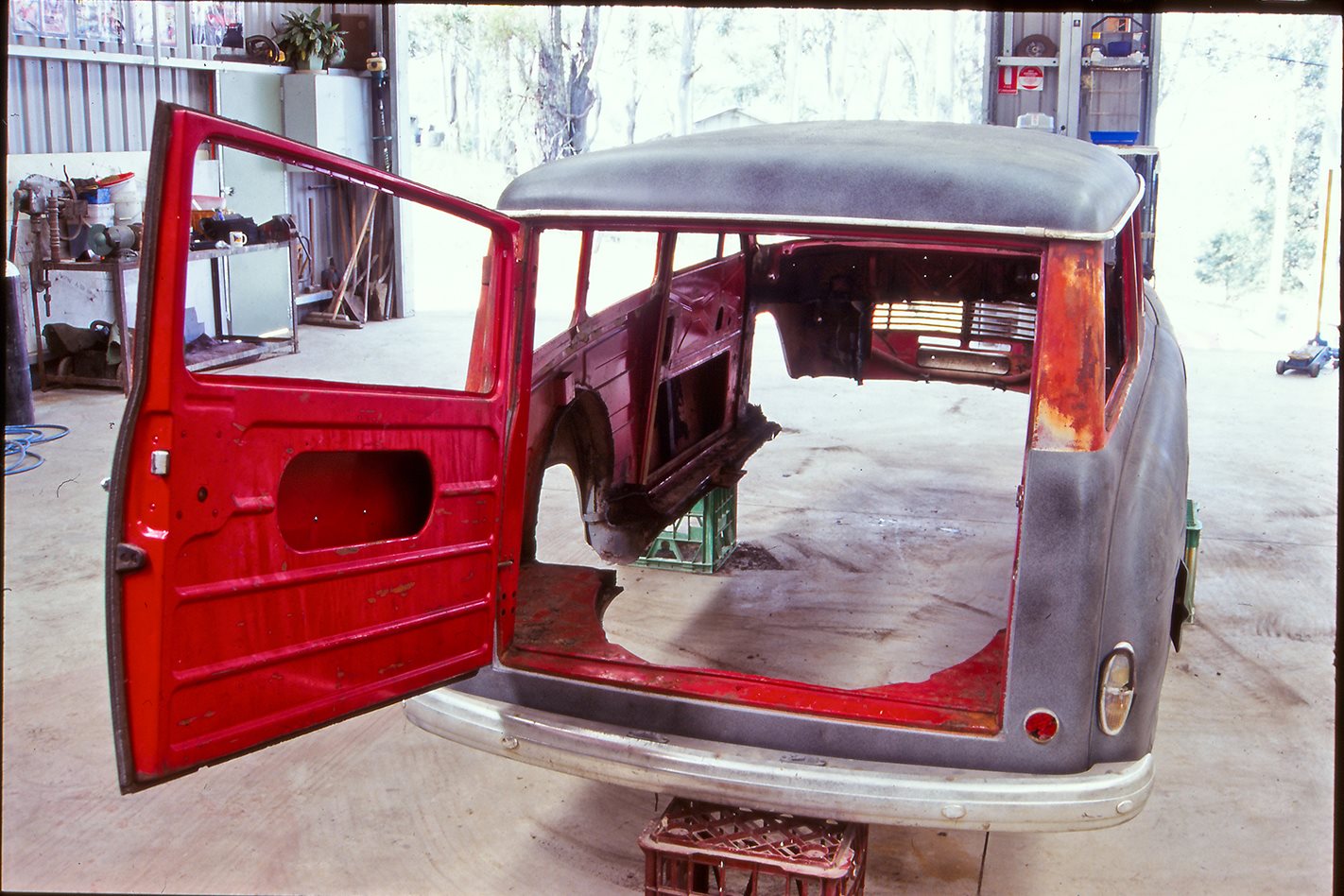 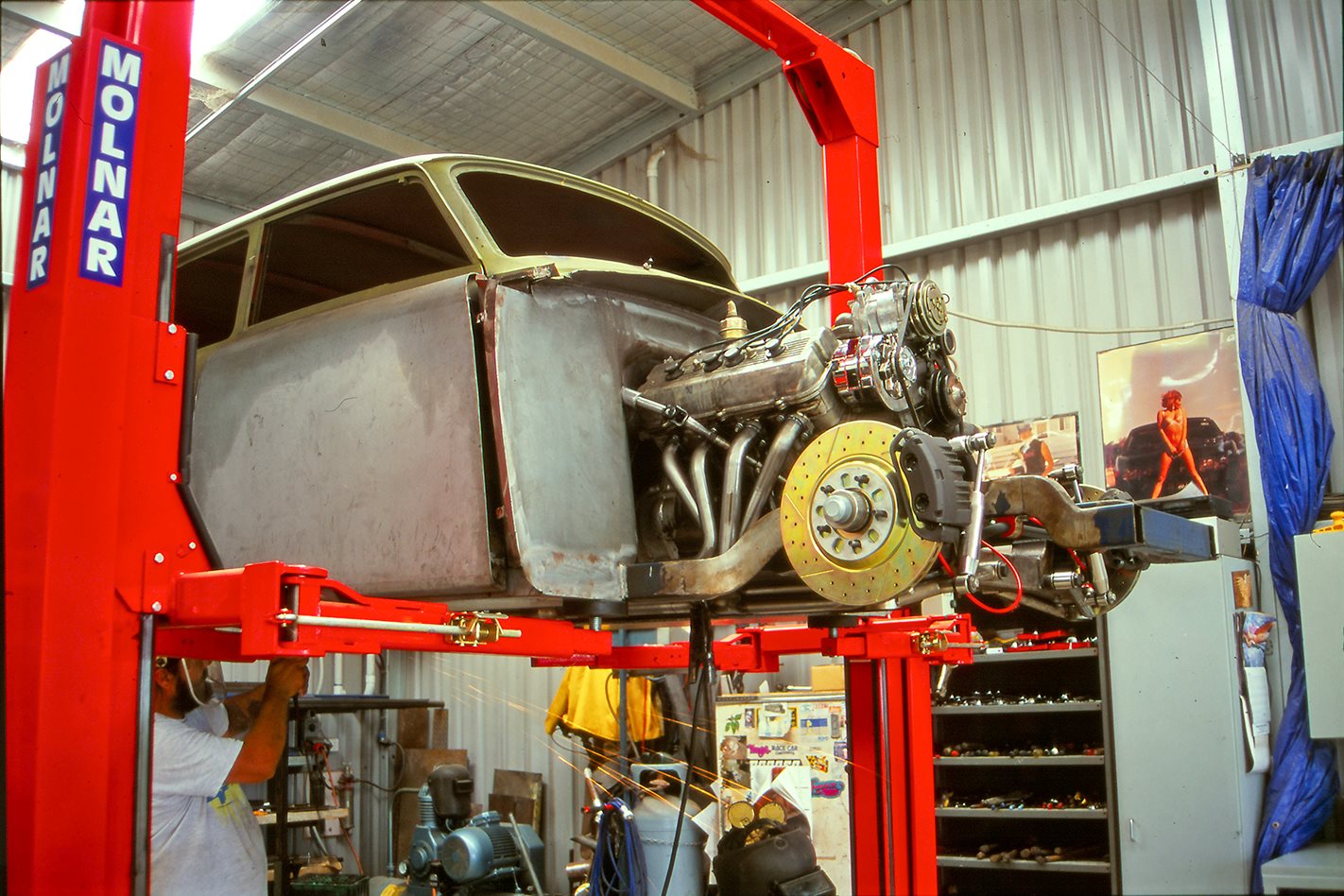 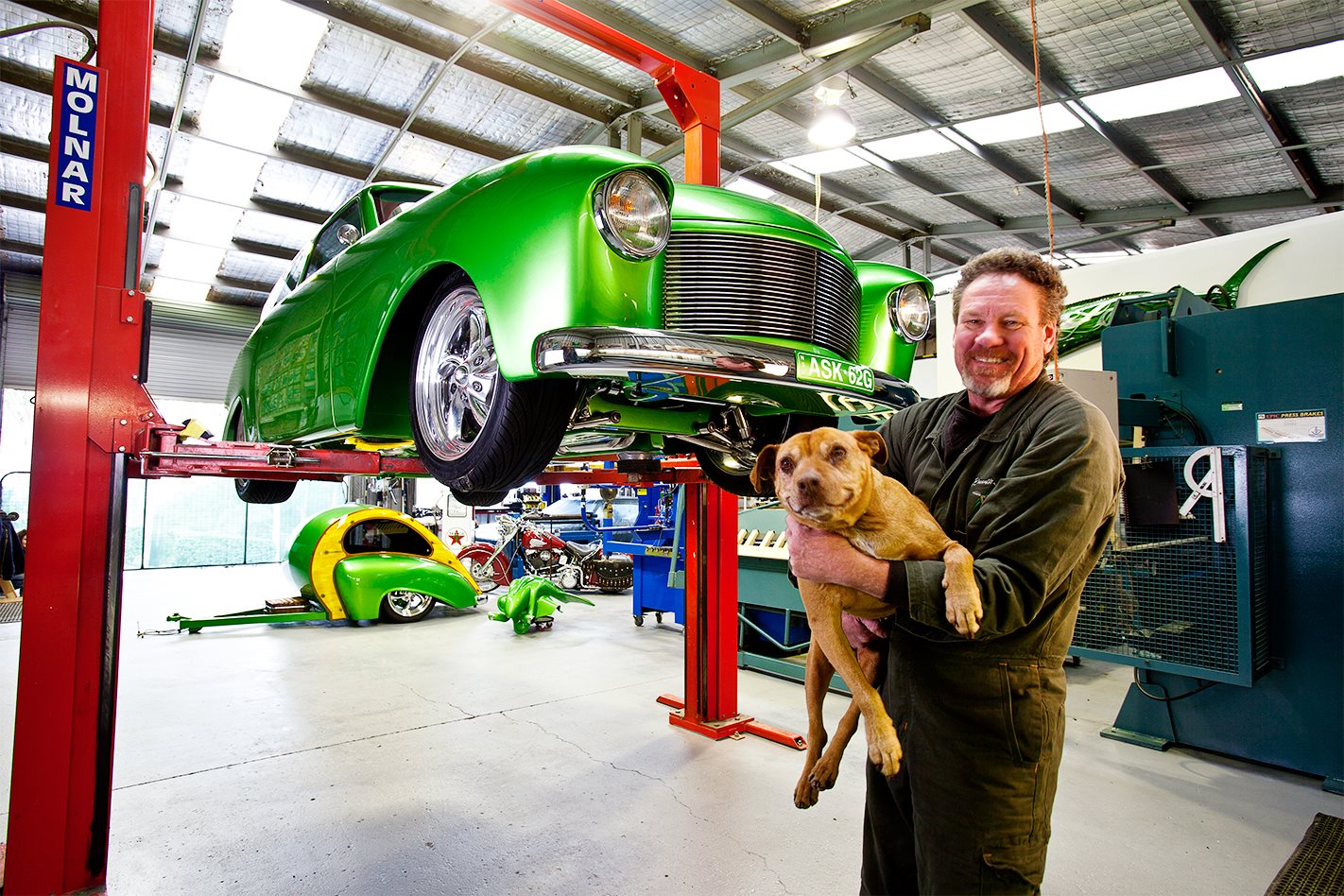 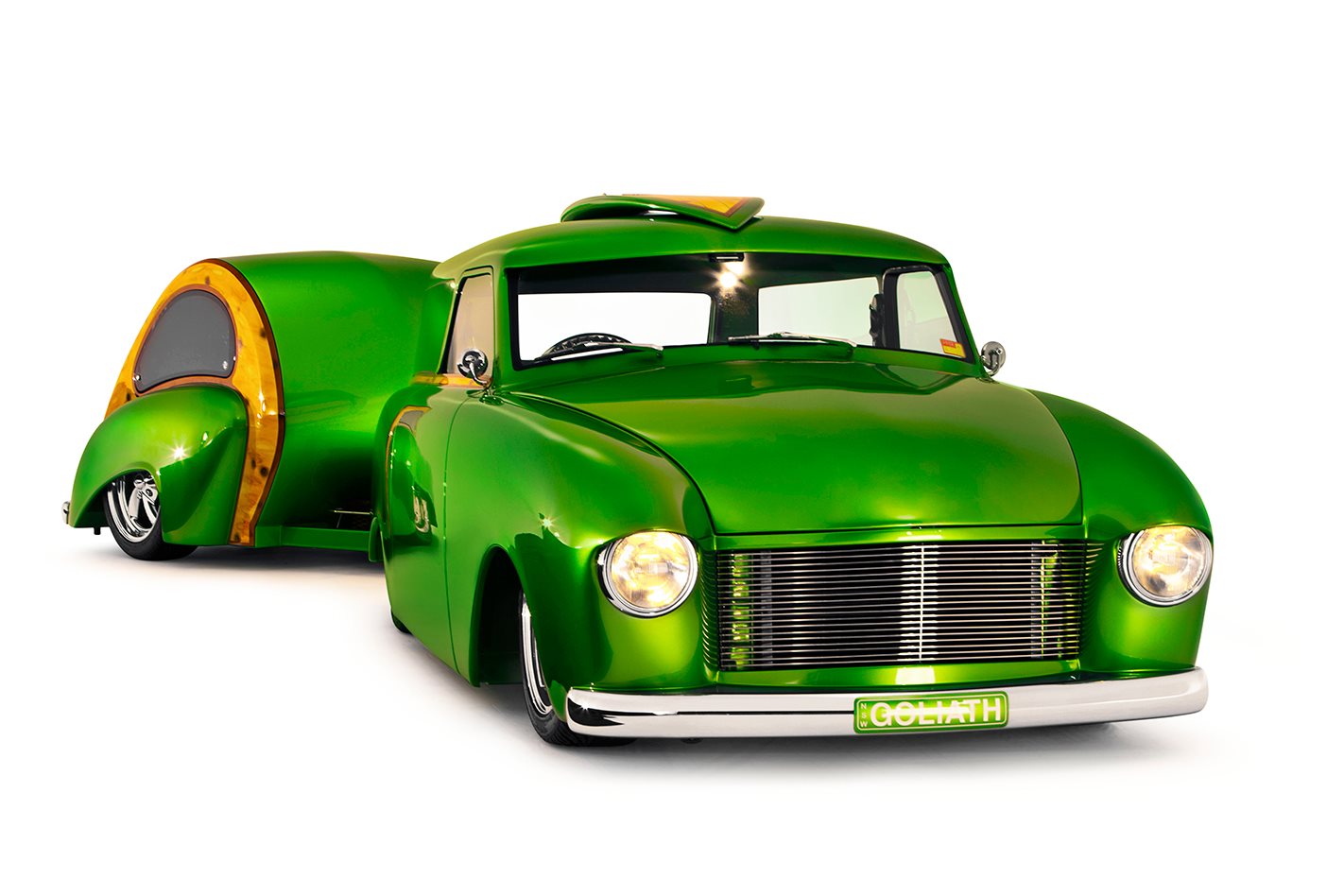 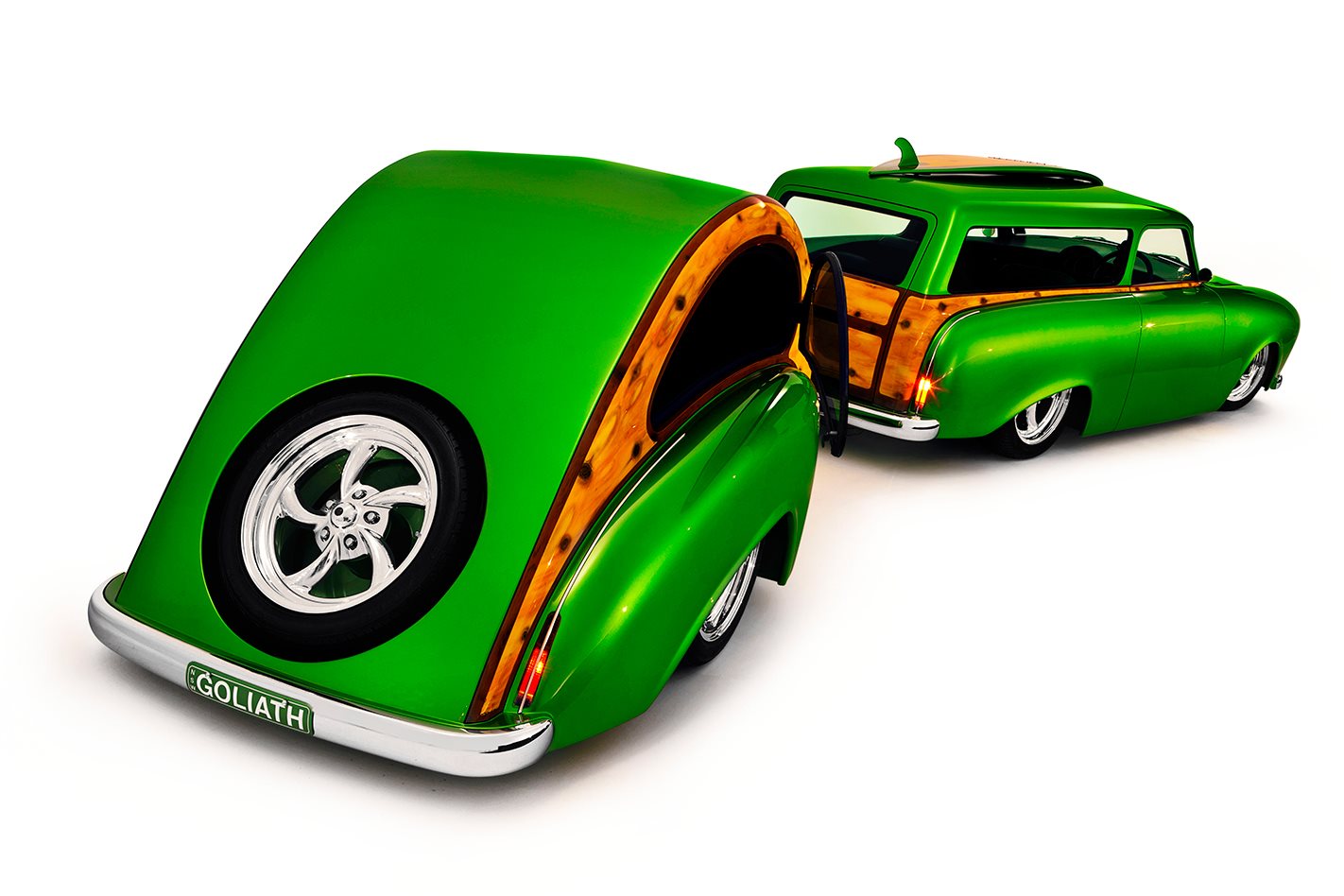 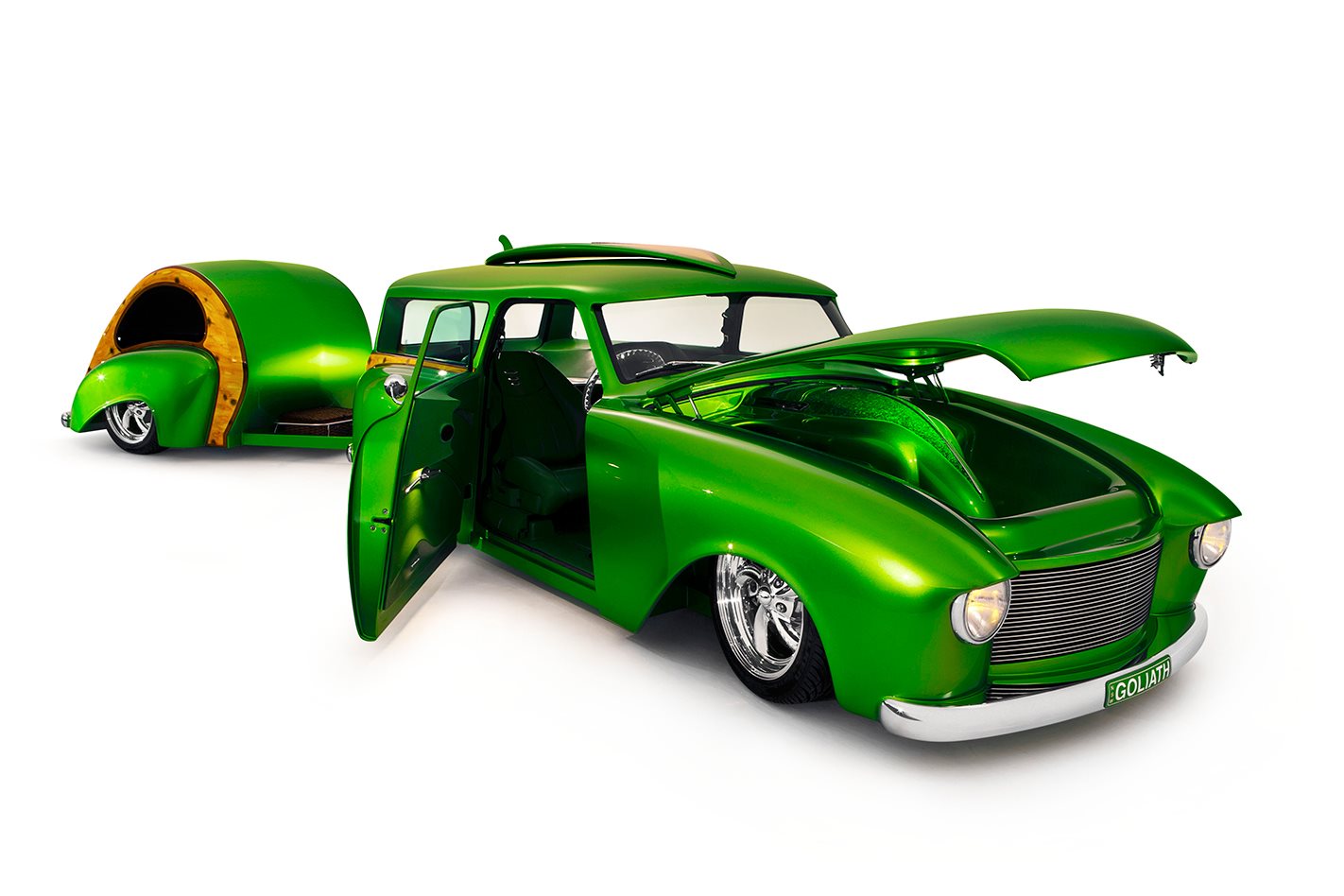 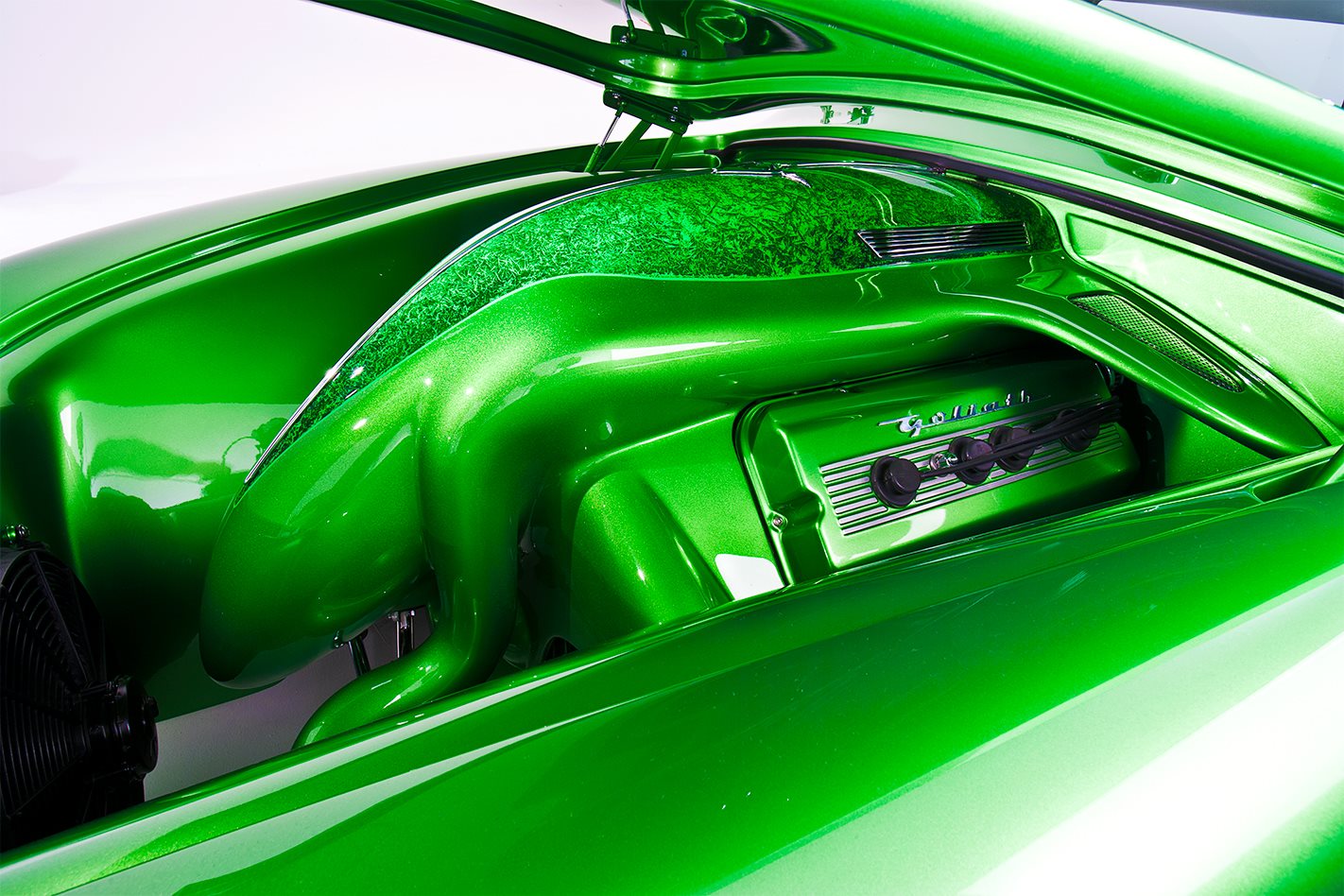 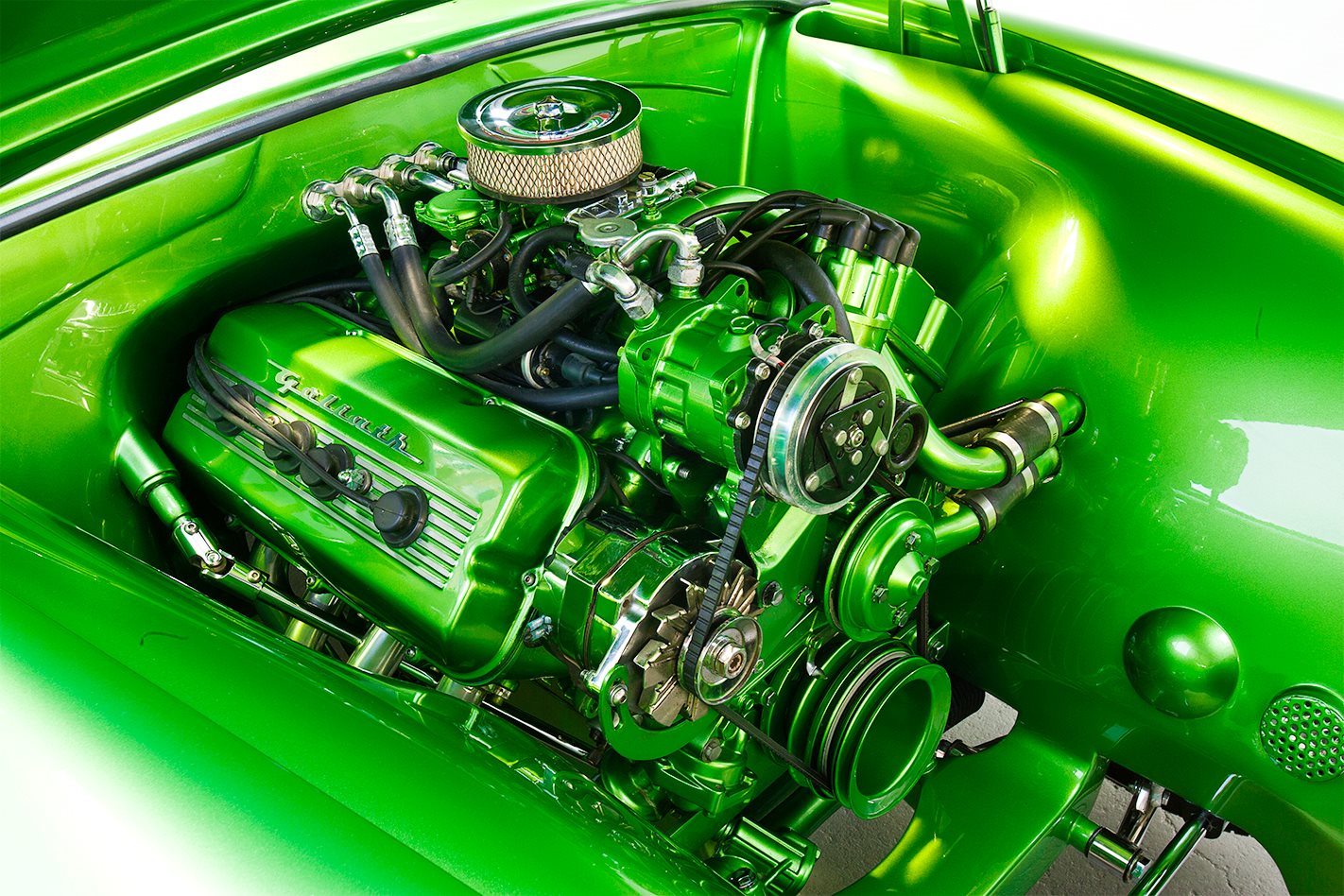 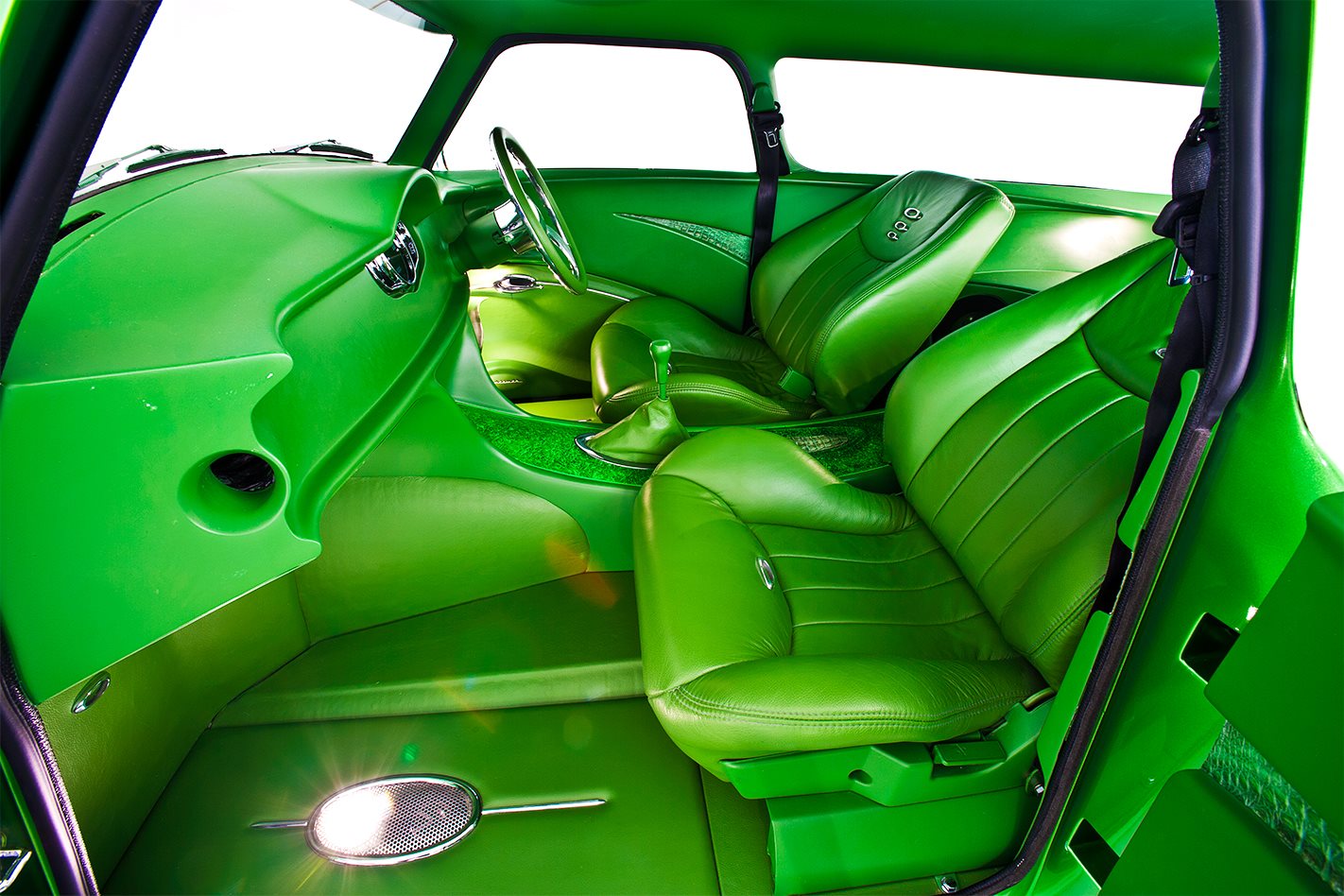 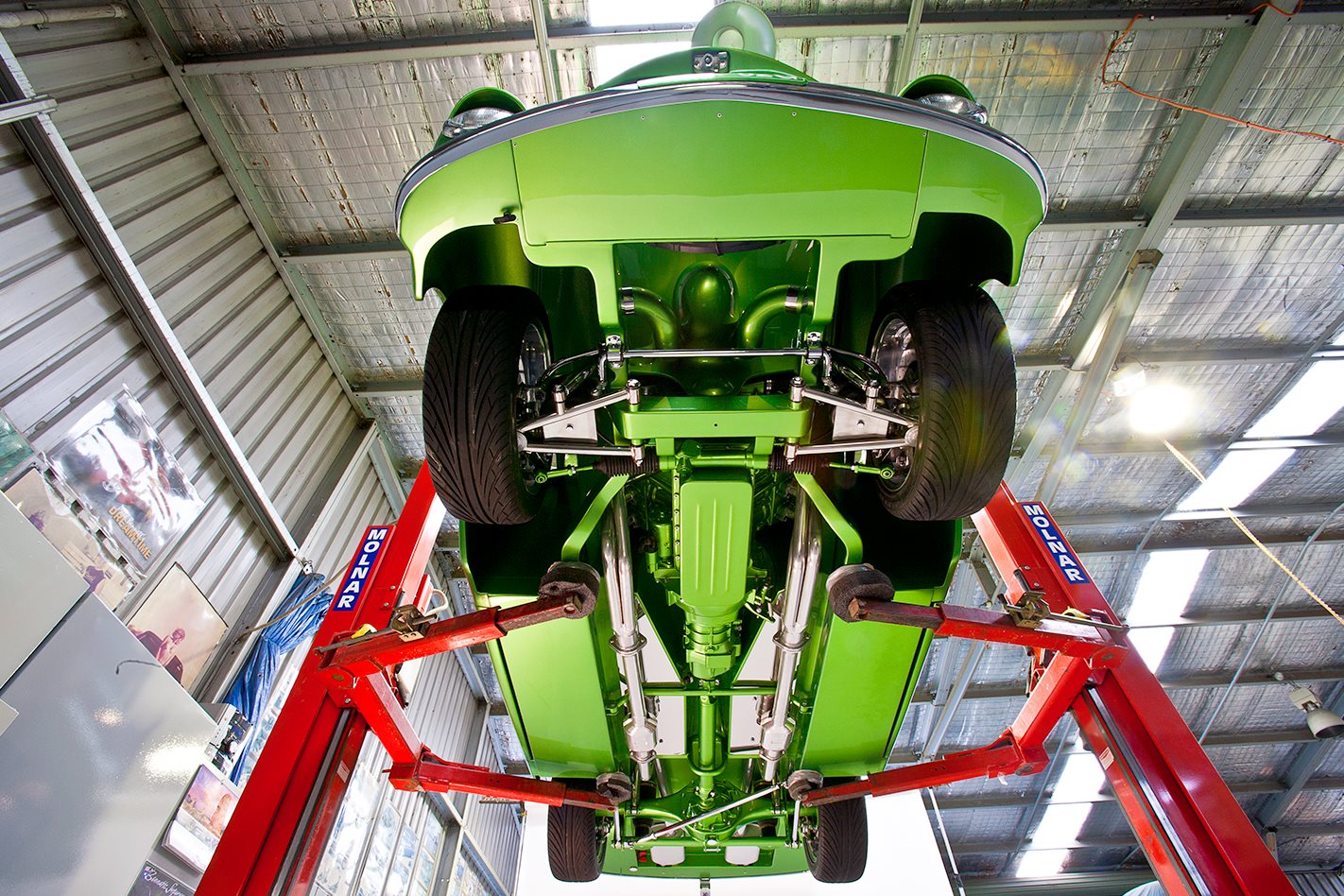 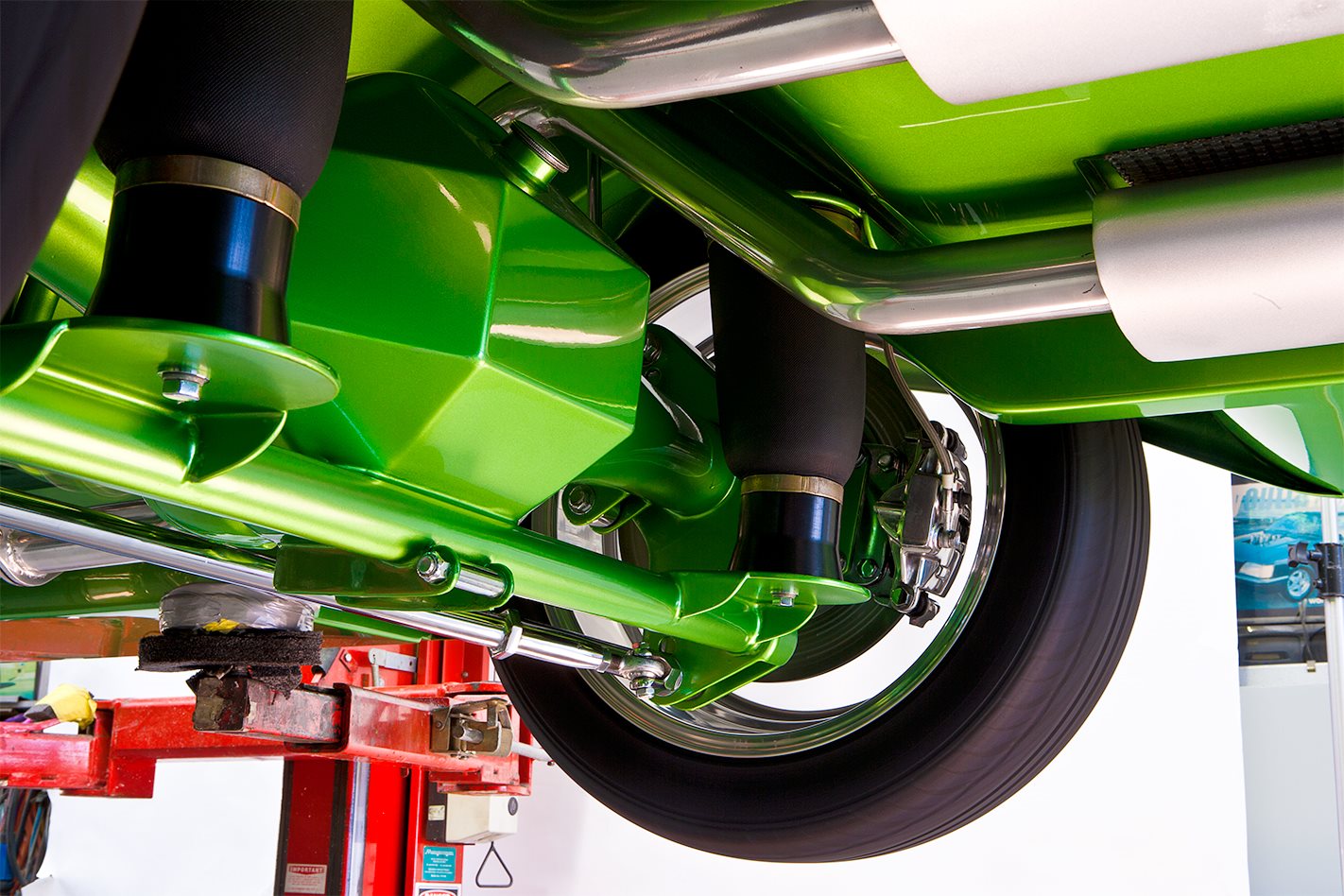 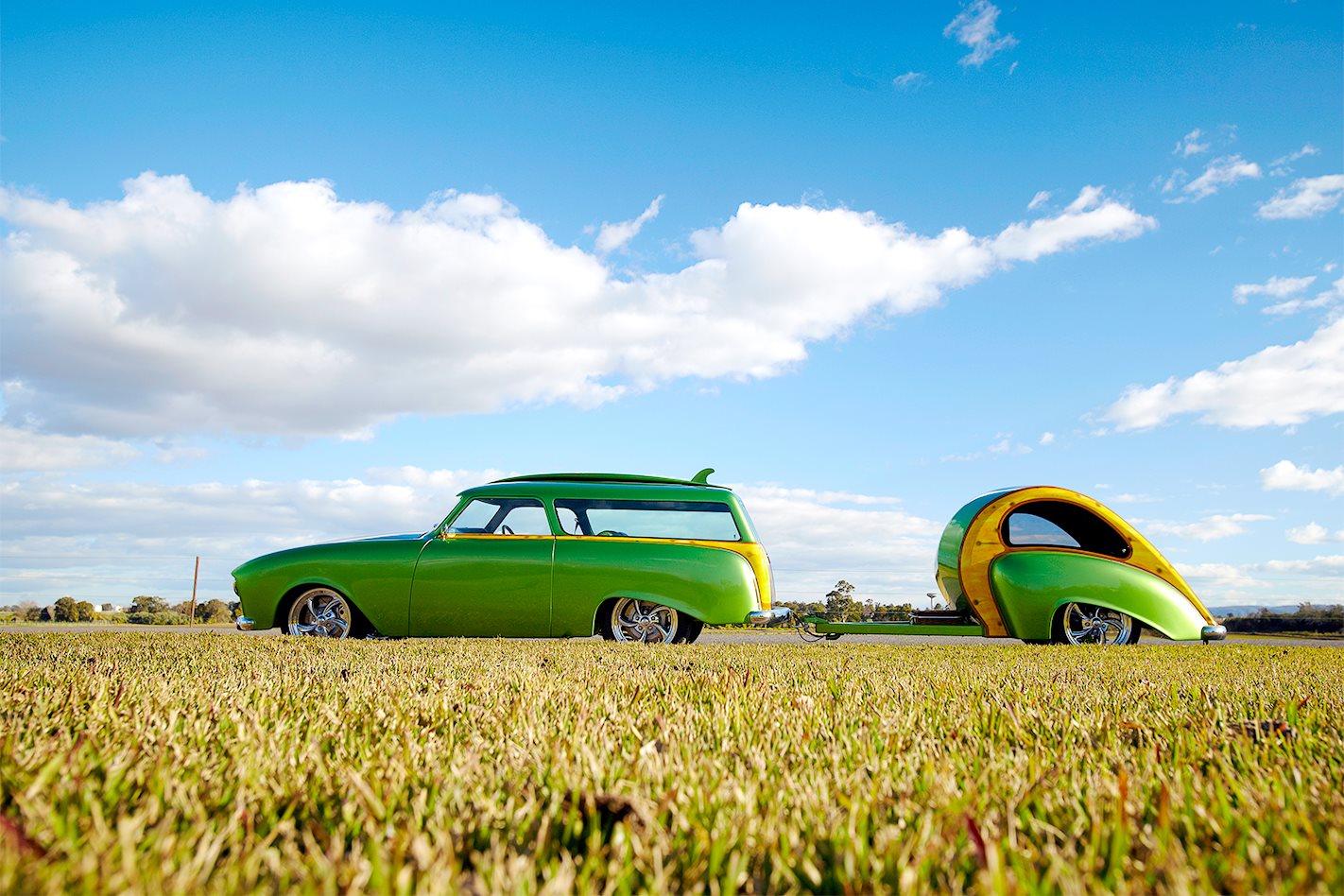 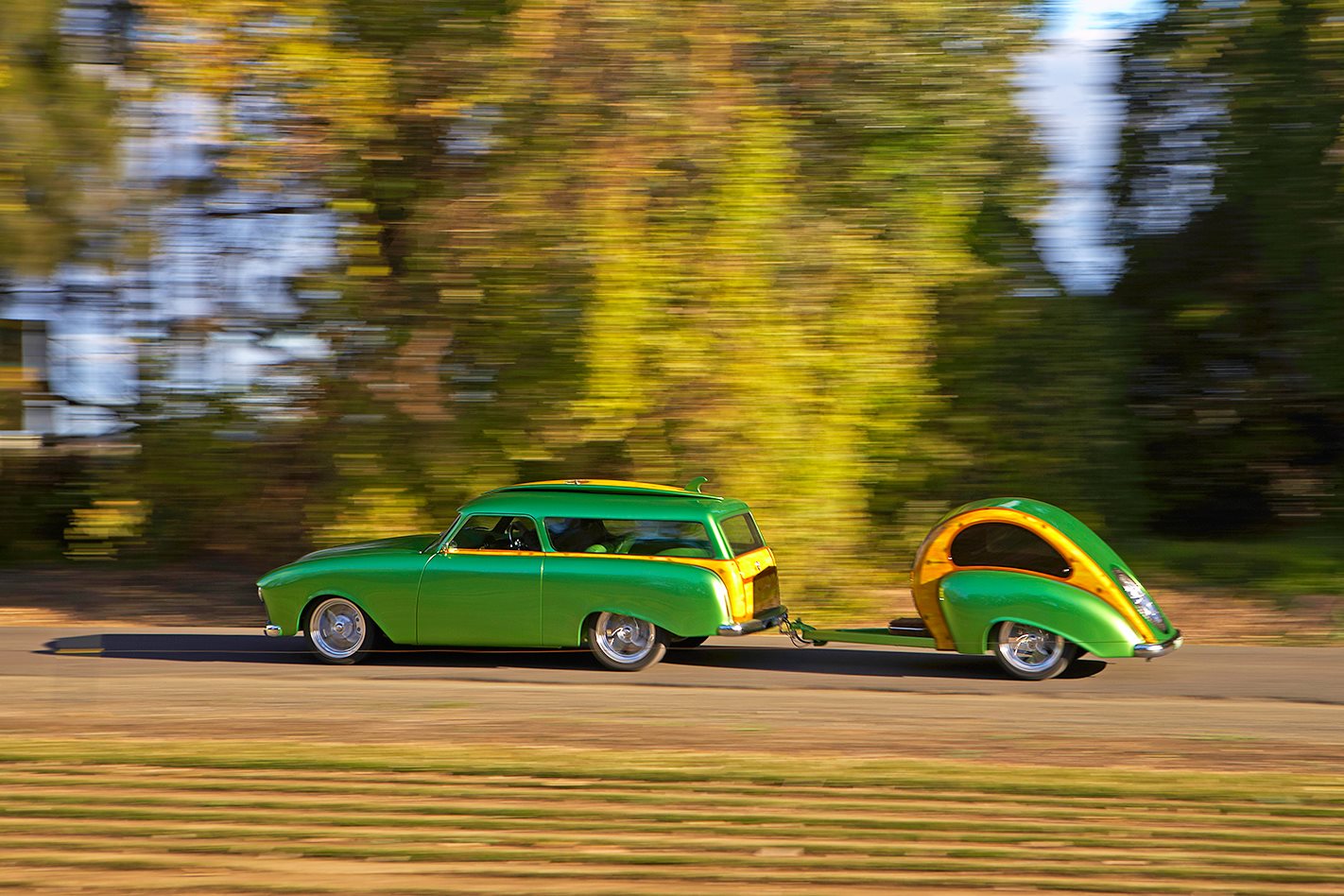