These days there’s some tough big-inch alloy-headed Holden V8s, but one of Bob Kotmel's all-time-favourite combos is the TQ20-TQ30, flat-top, stock-stroke 308

THESE days there’s some tough big-inch alloy-headed Holden V8s, but one of my all-time-favourite combos is the TQ20-TQ30, flat-top, stock-stroke 308

Back in the 70s, Sig Erson was the first well-known American cam company to start manufacturing cams for Holden V8s. Until then, Holden cams were regrinds.

Then someone ground the TQ20 intake and TQ30 exhaust lobes on a US blank billet with 106° lobe centres. Installed six degrees advanced, these tiny little cams defied logic. Cars would run well into the 12s with over 105mph terminal speeds, yet were civil on the street. They easily made more than 300hp (Moroso) on pump fuel.

For a bottom end, there was nothing special required. Block prep was simple: polish the valley so the oil ran back and then deck-plate the bore and hone the cylinders for Federal-Mogul 30thou-over cast flat-top L34 pistons.

These had to be set up with big piston-to-wall clearances and would rattle when they were cold – they were nearly as strong as forged pistons. The stock cast-iron 3.062in-stroke crank could survive every abuse imaginable. All that was needed was to carefully chamfer and balance the oil holes – if you were cashed up.

Absolutely mandatory was fitting SPS high-tensile rod bolts to the stock rods and resizing with two- to three-thou crush. The bearings used were L34 Repcos. Oil seals came in two types, rope or neoprene, and the only blocks available in the 70s were Trimatic patterns. Later blocks had the Chev bolt pattern, which made it easy to run a Powerglide or TH400 gearbox. 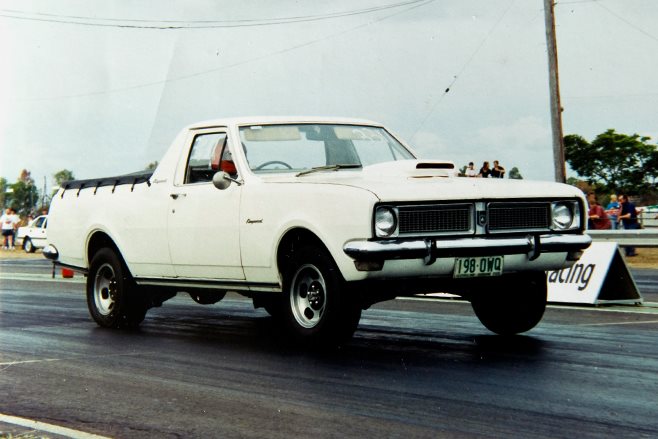 Bob wrote our first tech story on the humble Holden V8 way back in SM, June/July ’82! It is interesting to look back and see that back then, the 308 was regarded as somewhat fragile compared to its Chev brethren, and Bob listed a litany of woes that befell street-driven V8s in the 70s

The best timing set was the Rollmaster double-row with a JWIS chain, as it made it easy to degree the custom-ground TQ20-TQ30 cam. High-tensile pushrods added some lift, and roller rockers were essential because the stock pressed-tin fulcrum-style rocker arms were crap and used to mushroom over the ends of the valves. Also, when some decent valve springs were used, the pushrods would go right through the stock tin rocker arms. Grey and white Isky doubles were used for the valve springs.

Before alloy heads came on the market, the stock cast-iron red heads had to be ported by someone who knew what they were doing. If you tried to copy the porting techniques used on any conventional head they wouldn’t flow. Most people were getting 400hp of air flow out of them. If you rolled the short side back into the seat, however, the heads would flow perfect cfm per square inch of valve.

A stock 1.75in intake could flow 410hp, and a 1.94in intake valve could flow 480hp. The exhaust on the other hand was too easy to make flow. With just a radius seat, the stock 1.5in valve would flow nearly the same as a 1.75in intake. The heads were machined to give a final compression of 10.5:1 with the flat-tops.

The stock two-plane manifold would knock quite a bit of flow off a good set of heads, and the best intake to run at the time was an out-of-the-box single-plane Edelbrock Torker with a two-inch open spacer. Later came the Peter Michaels manifold and the Torque Power manifold. For a carburettor, my favourite was a 650 double-pumper fitted with stepped downleg boosters and an 800 Holley baseplate. When the carburettor was set up right it was a bolt-on 20ft-lb and 20hp over anything else.

For exhaust pipes, we had two very good manufacturers: Genie and Pacemaker. Both sets of four-into-one extractors worked well. For tri-Ys, the best designs were the pipe-over-cone type – if you got the wrong type, they were a bolt-on 50hp loss and you’d lose half a second and 5mph at the track. The other thing we found was that turbo mufflers aren’t made equal. One particular brand lost 100hp on the dyno. It wasn’t until we cut them open that we found out why: the two-inch turbo mufflers had a much smaller 1.25in pipe in the middle.

We also used a blueprinted Precision oil pump and a re-curved stock Bosch Holden electronic distributor with a 302 XD rotor and stock early-model 308 small cap. A red Bosch GT40 coil was as good as any.

For oil, Pennzoil 25-50 or Penrite HPR30 was used. On most motors, I made my own louvred windage tray or used a High Energy pan. It’s essential to have some sort of oil control in the 308. Fuel supply is also critical. I used a Holley red or blue pump set-up with around 5psi pressure. While this combination sounds basic, it embarrassed a lot of Chevs and Fords in its day, and would hold its own against a lot of cars these days. In a 3150lb car, like the old sludge ute, a combo like this would run low 12s at 109mph all day.