DONE deal. Rob Belsito handed over the dough and now the seller had to sign away ownership of the tidy 308-engined Torana. His face went pale and his hand shook. Maybe he knew he’d regret it or maybe he wasn’t sure it was going to a good home. Whatever the reason, he was nervous. But he signed. Rob walked around to the passenger’s side while his mate climbed behind the wheel — Rob had never driven a manual. The mate he’d entrusted to take him and his new toy home smoked it up all up the street. 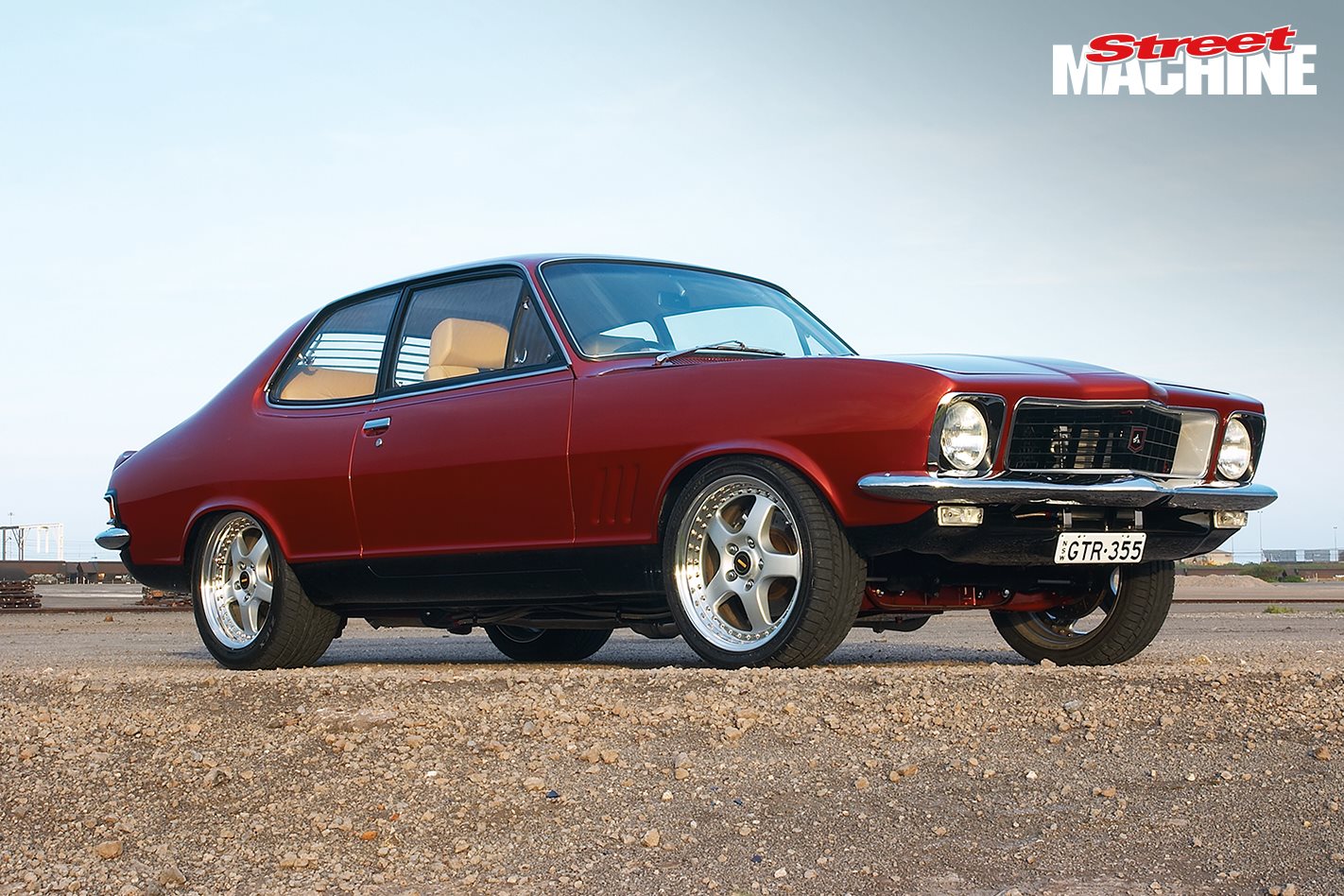 God knows what the nervy seller thought, and who really cares? Fact is, the Torrie went to a great home and if the bloke recognises this as the car he once owned he’d have to be happy. Rob’s done an awesome job, turning a decent street machine into an elite-class winner. He scored a Top 20 and Top Tudor at Street Machine Summernats this year, and Top Coupe/Tudor and Top 10 at the Sydney Car Festival before driving home to Wollongong in rain and fog.

“That’s what they’re built for,” he says. “It drives smooth and loves cruising.” 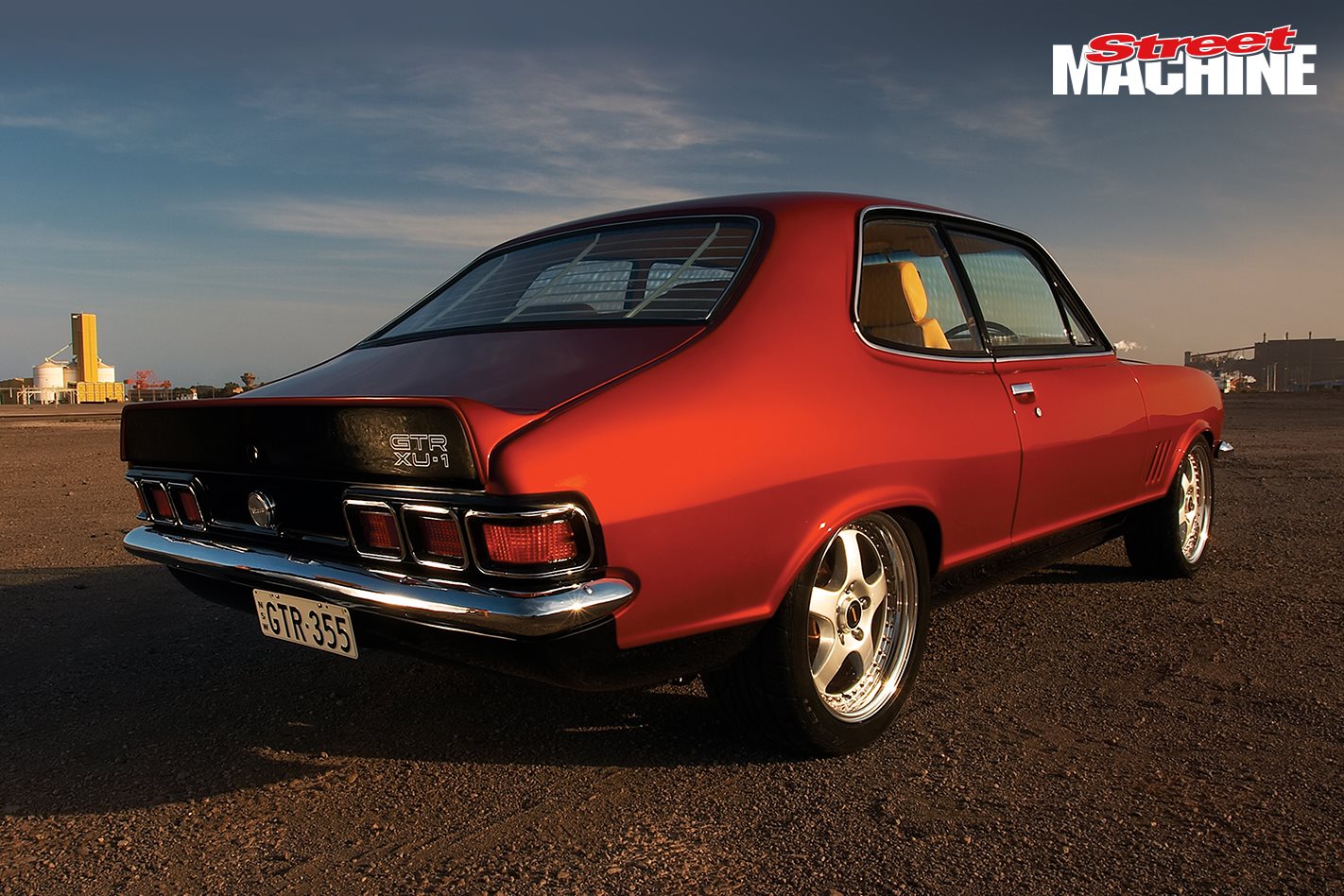 Rob set out to own an LJ that was different from the rest. He’d not seen VL Group A injection fitted to one, so that became the centrepiece of his first ever car build-up. He just wanted to create something that’d “hold its own on the street and at shows” and reckoned the project wouldn’t be hard.

“How wrong I was,” he grins. “I have a newfound respect for modified car builders as I now understand what’s involved.” 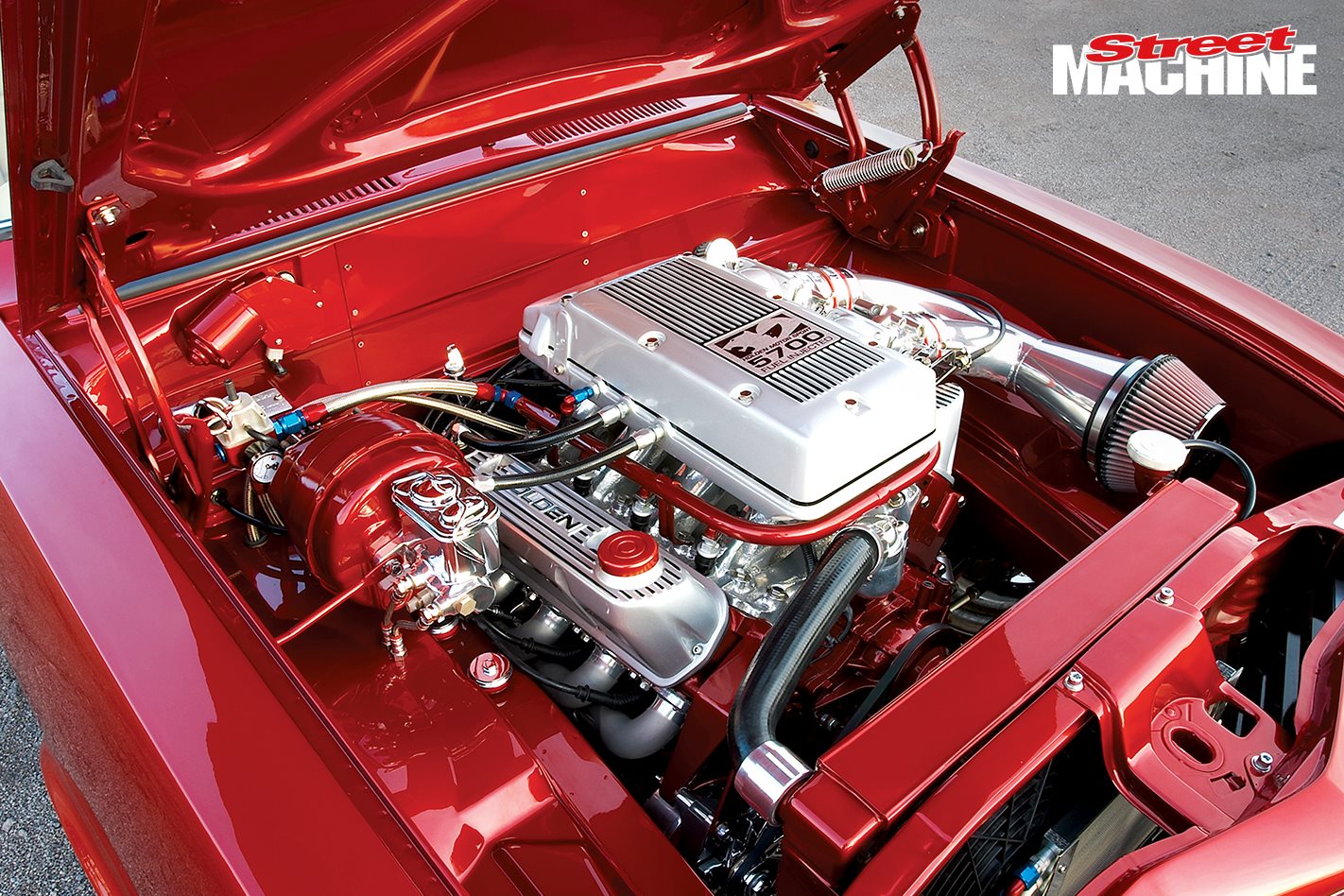 He wisely chose a car already engineered for a V8. He stripped it, bead-blasted the body, patched a little rust and began a three-and-a-half-year build. He had a plan and pursued it relentlessly through everything from the powerplant to the mass of perfect details around the car.

Ultra Tune at Erina rebuilt the donk around a 355ci Harrop stroker crank, ACL flat-top pistons and a mild COME cam with 218deg duration in and out. Super Flow worked up a good set of VS GTS heads. At 10:1 compression, the engine likes 98-octane juice. 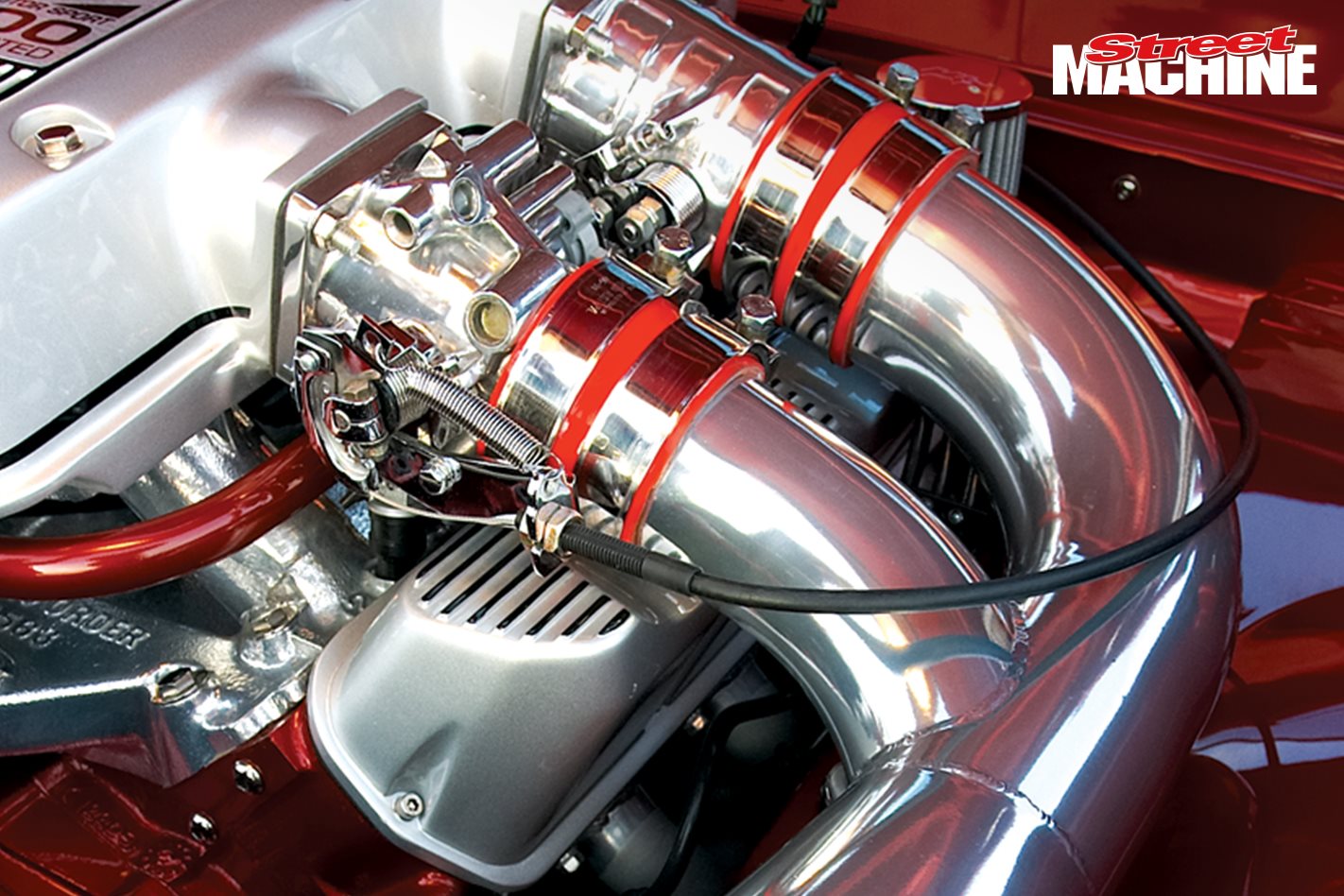 Rob expects about 350hp at the crank when he finally gets to the dyno. 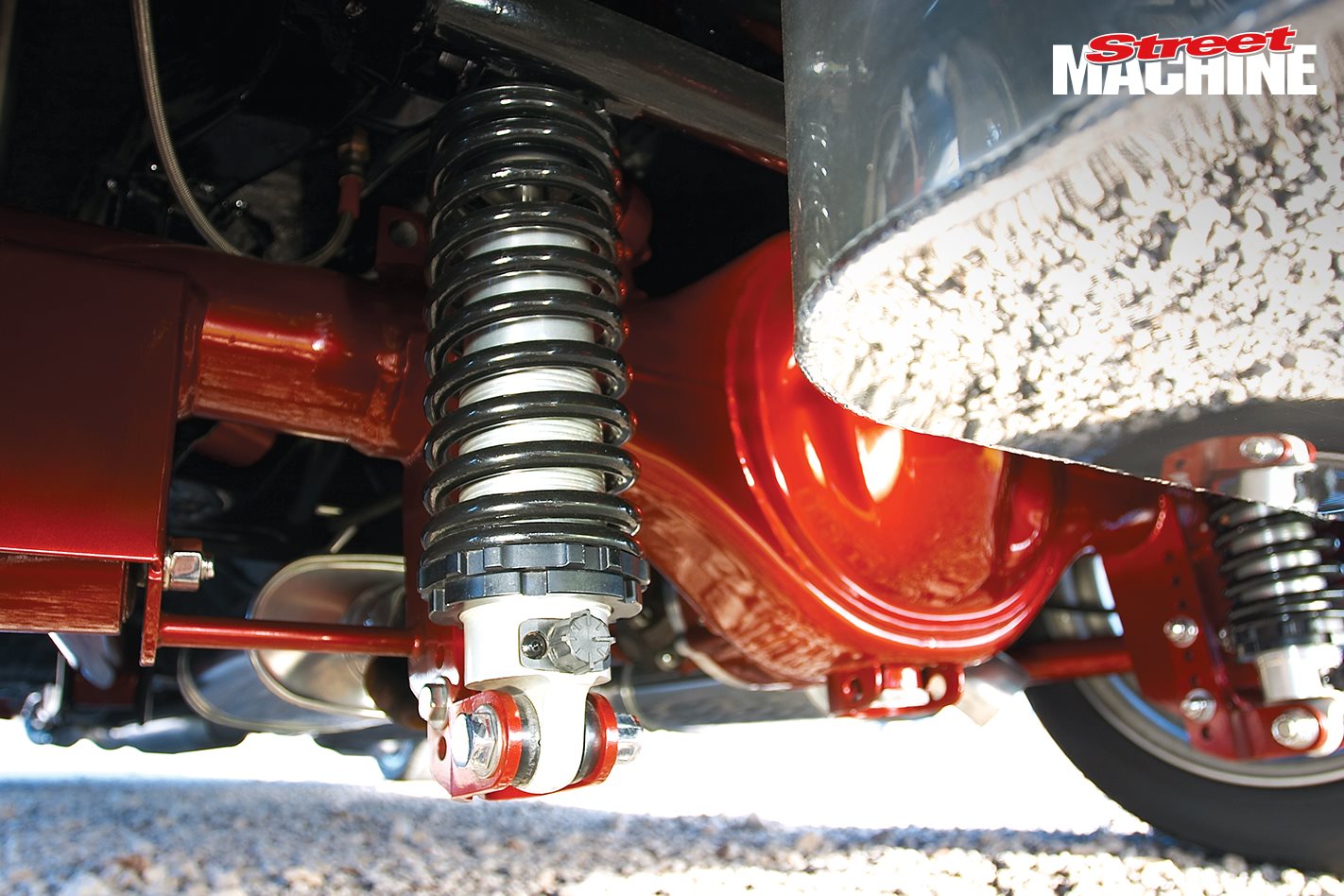 The grunt is funnelled through a damn-near unbreakable driveline, which includes a manualised Turbo 350 and a CSW nine-inch diff, complete with billet 31-spline axles, Moser alloy pinion support and a full spool.

Body mods go way beyond the ultra-smooth engine bay. The rear arches are stretched and the back-end’s tubbed to fit the nine-inch wide wheels. The mirrors, passenger-side door lock and aerial are all gone to clean the lines, and the battery lives in the boot. 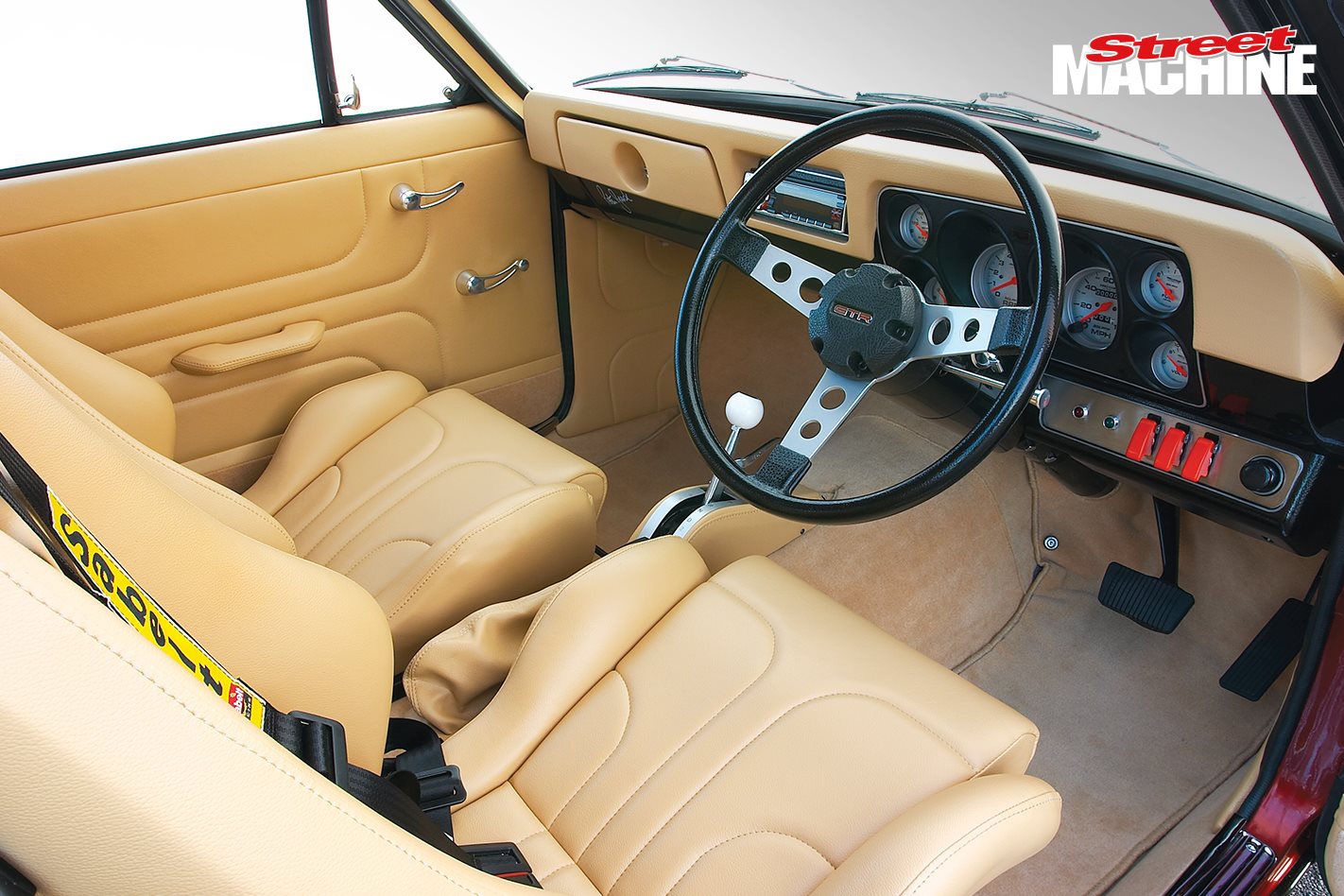 The engine is exactly the same colour as the body, and even the radiator’s been sprayed. What’s not painted red is chromed and polished — except the rocker covers which are painted silver with black pinstriping. Parts like the induction snorkel and many brackets had to be made from scratch. 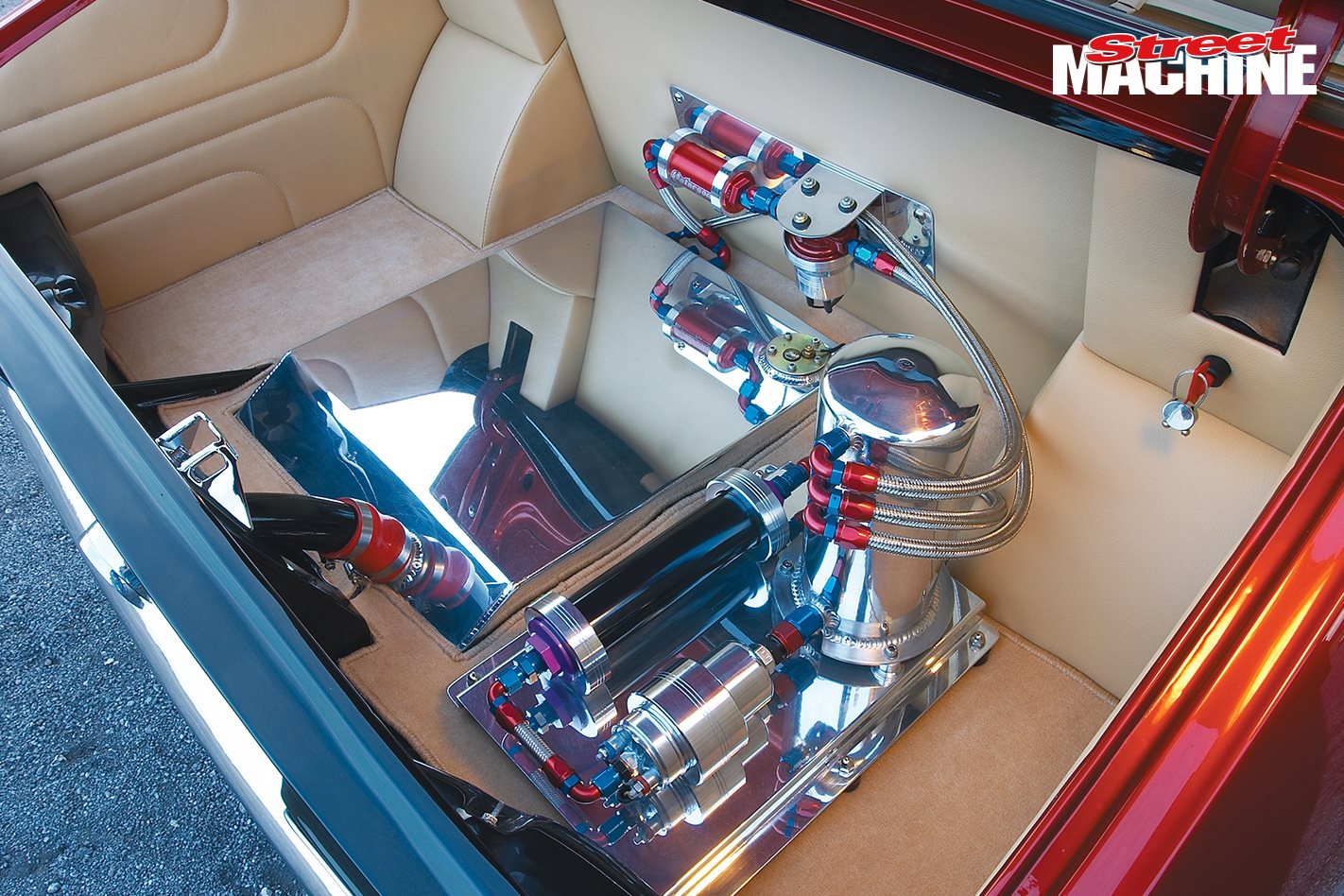 Slide underneath and there’s even more perfection — everything’s painted or polished. With the tubs in place, Rob had a bar welded between the chassis rails to mount coil-over shocks; the lower mounting points on the diff housing are reinforced by chrome-moly bars. All the trailing arms are fabricated from chrome moly, too. And painted red. 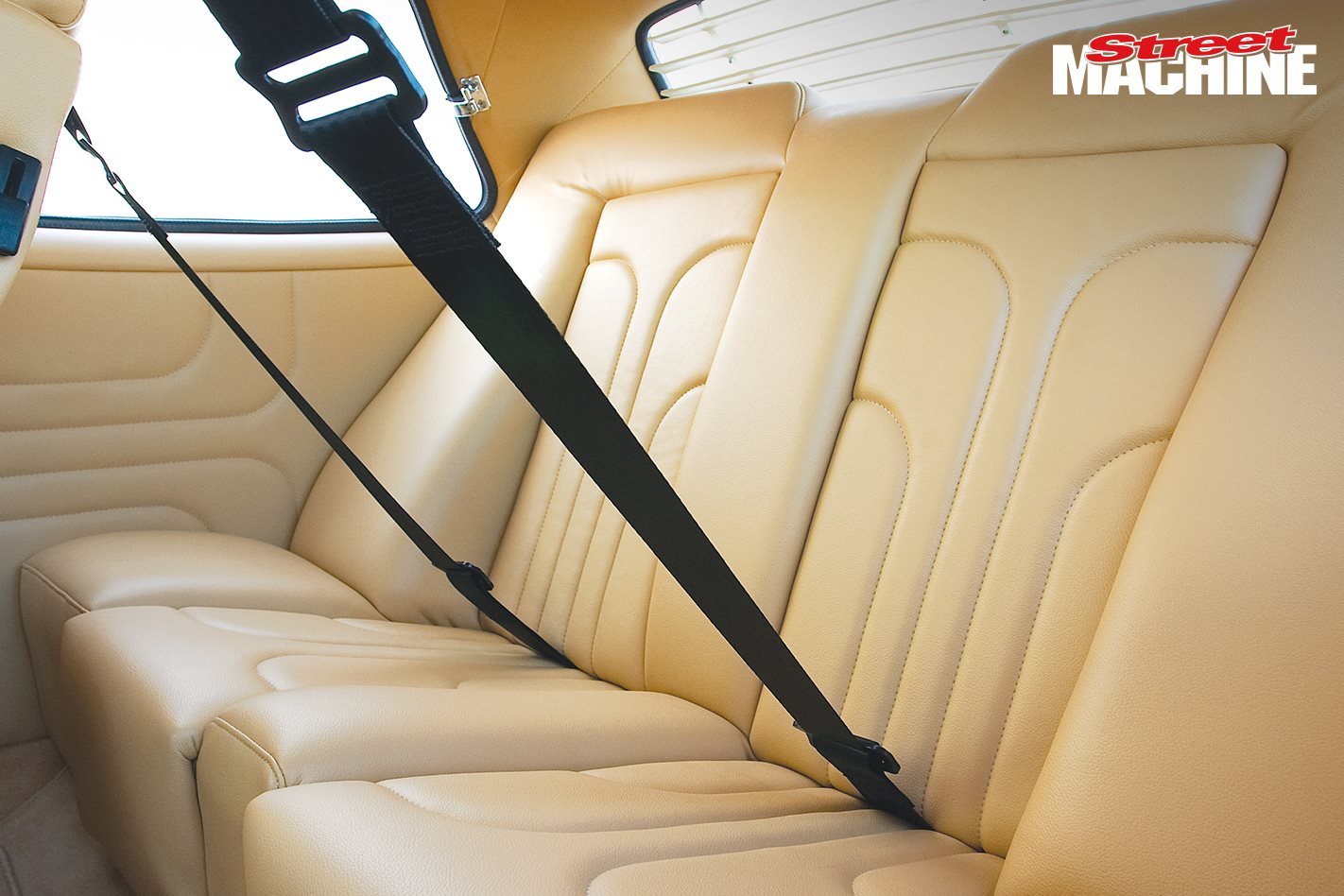 The Torana stops like a demon on Commodore brakes — DBA discs from a VL V8 all ’round, with a CRS VT caliper kit up front and VL V8 calipers at the back. Rob chose an XB master cylinder and modified a ZF Fairlane booster to clear the rocker covers. All hoses are braided and the solid lines are hidden as far as possible. 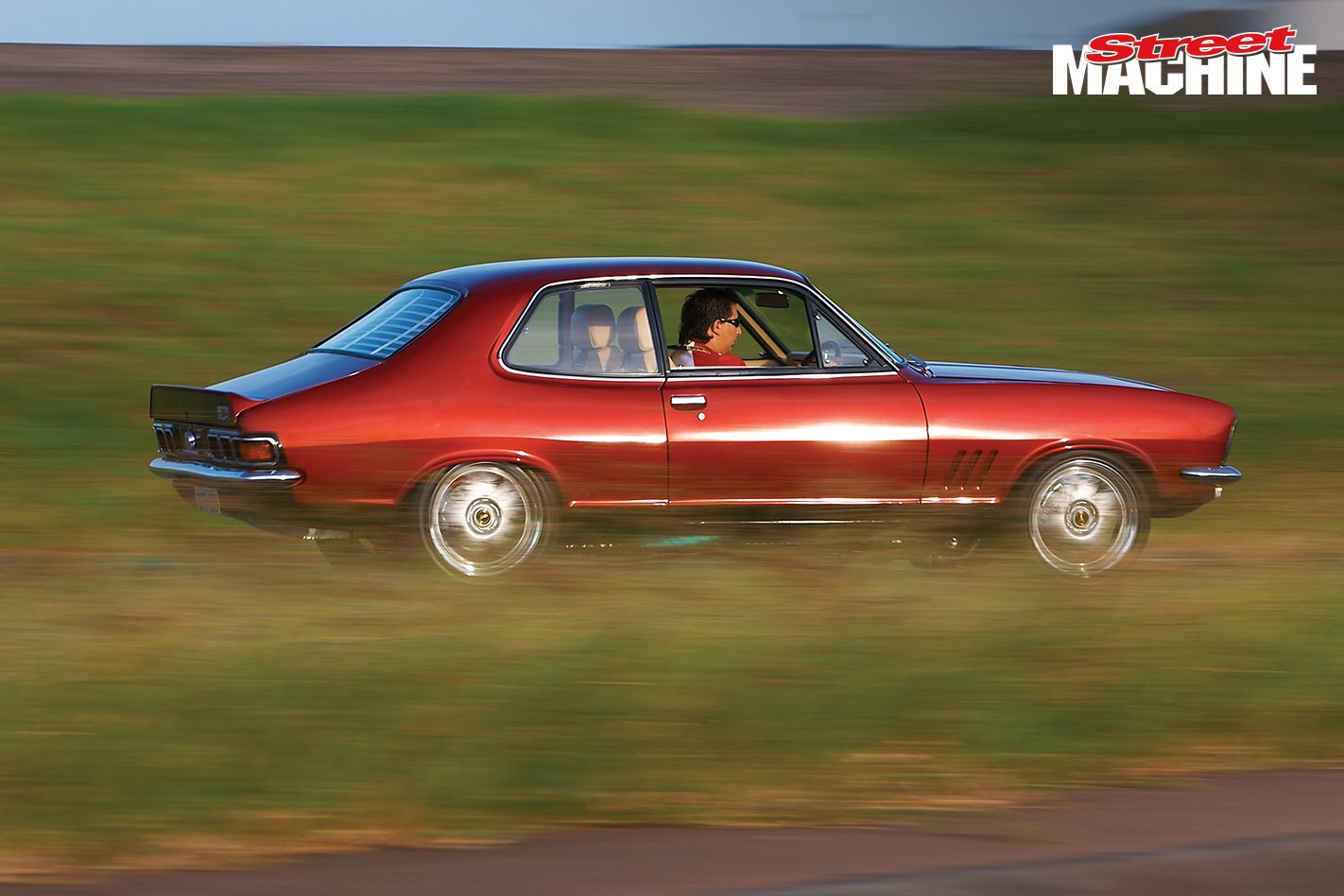 Rob’s rapt with the job Steve at Cools Auto Trim did inside — a full re-trim including hood lining, while the parcel shelf hides the rear speakers. Rob retained the standard dash face but fitted silver-faced Auto Meter gauges. The lower panel is modified, with stainless inserts, warning lights and aircraft-style switches. The fuses are hidden in the glovebox and the ignition and coil — MSD 6AL and Blaster three-coil respectively — are under the dash. The boot’s renovation includes a gas strut system for the lid.

What a way to make your debut as a car builder. Unfortunately for show-goers, Rob doesn’t plan to do another unless he wins the lottery and you can almost hear other crafters breathing a sigh of relief. His long-suffering wife, Gessica, who married Rob in the middle of the build, is enjoying getting to know her hubby better now that he’s got time on his hands.

His next job is to finish the house. Knowing Rob, he’d turn a cottage into a castle.