AS YOU may have already guessed from the pics, Queenslander Darren Ryan is a card-carrying humpy fan. “I’d always liked the look of the FJ humpy shape, as my dad Ronald Ryan speedway-raced them in the 1960s A-grade,” he explains. 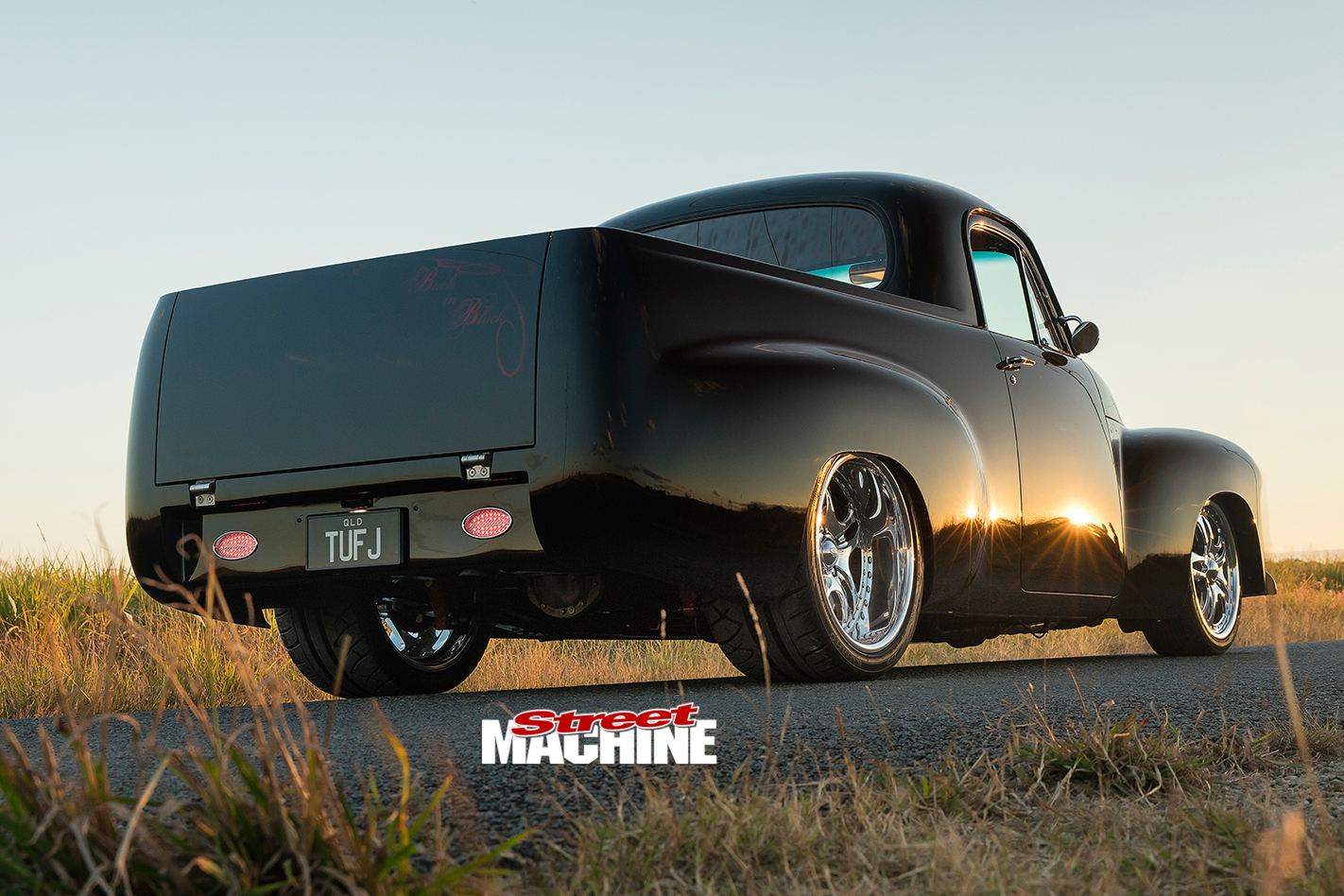 Darren particularly liked the idea of owning an FJ ute, and figured he’d get around to it one day. But several years ago, fate stepped in and gave him a sharp nudge, in the form of a mystery illness.

“The doctors thought I had lung cancer and the prognosis wasn’t good,” he says. “After the test results came back I found I actually had [the inflammatory disease] sarcoidosis.” 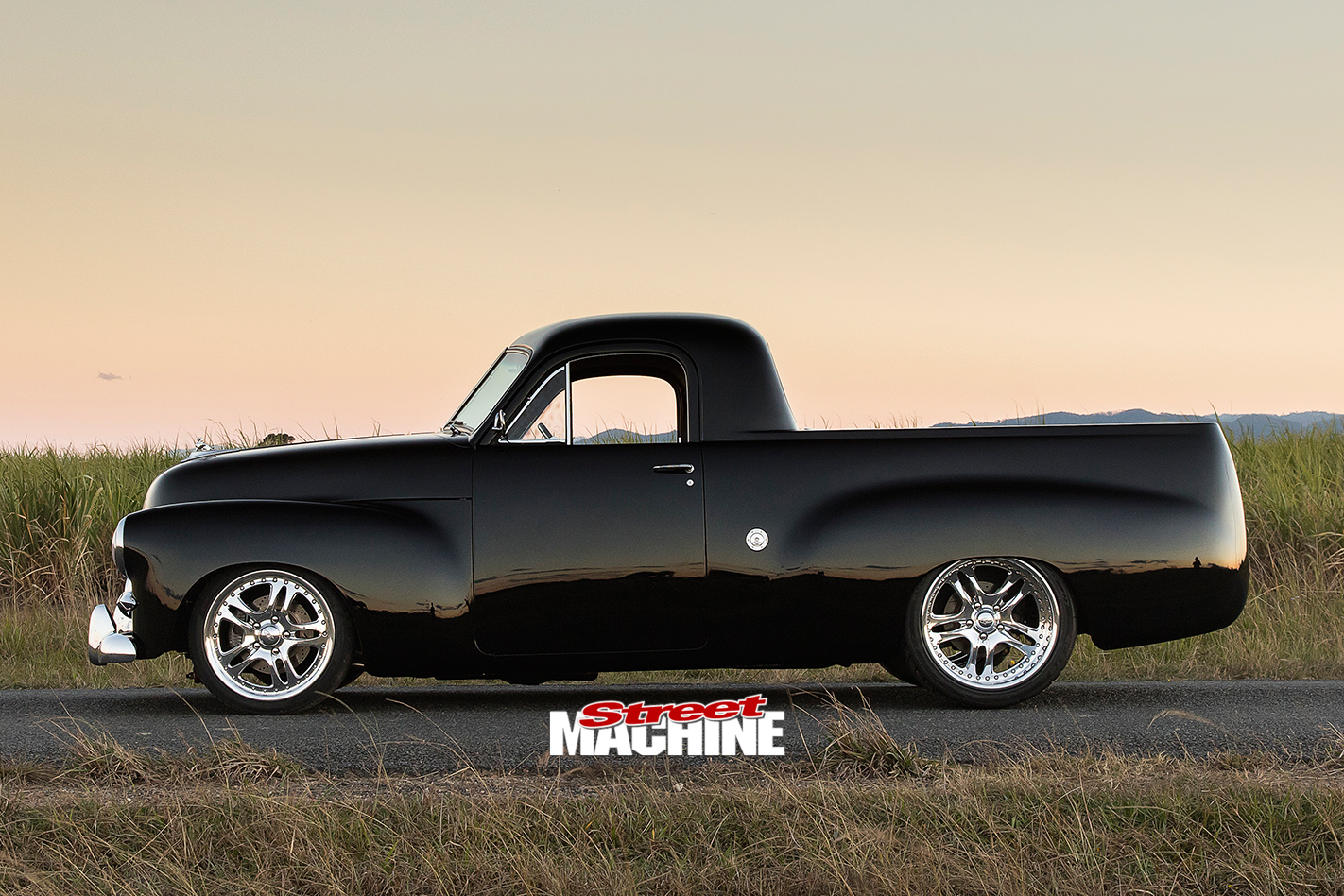 Though afflicted with the illness for the next five years, Darren’s relief at not facing a death sentence was massive. “After that, I figured I wasn’t going to die wondering; life is too short,” he says.

So, straight away he and his wife Lucy started the search for Darren’s dream car: an FJ ute. The pair finally found a useable example on eBay, though it was located in the Blue Mountains. After much communication and a heap of photos they did the deal and had it towed home. 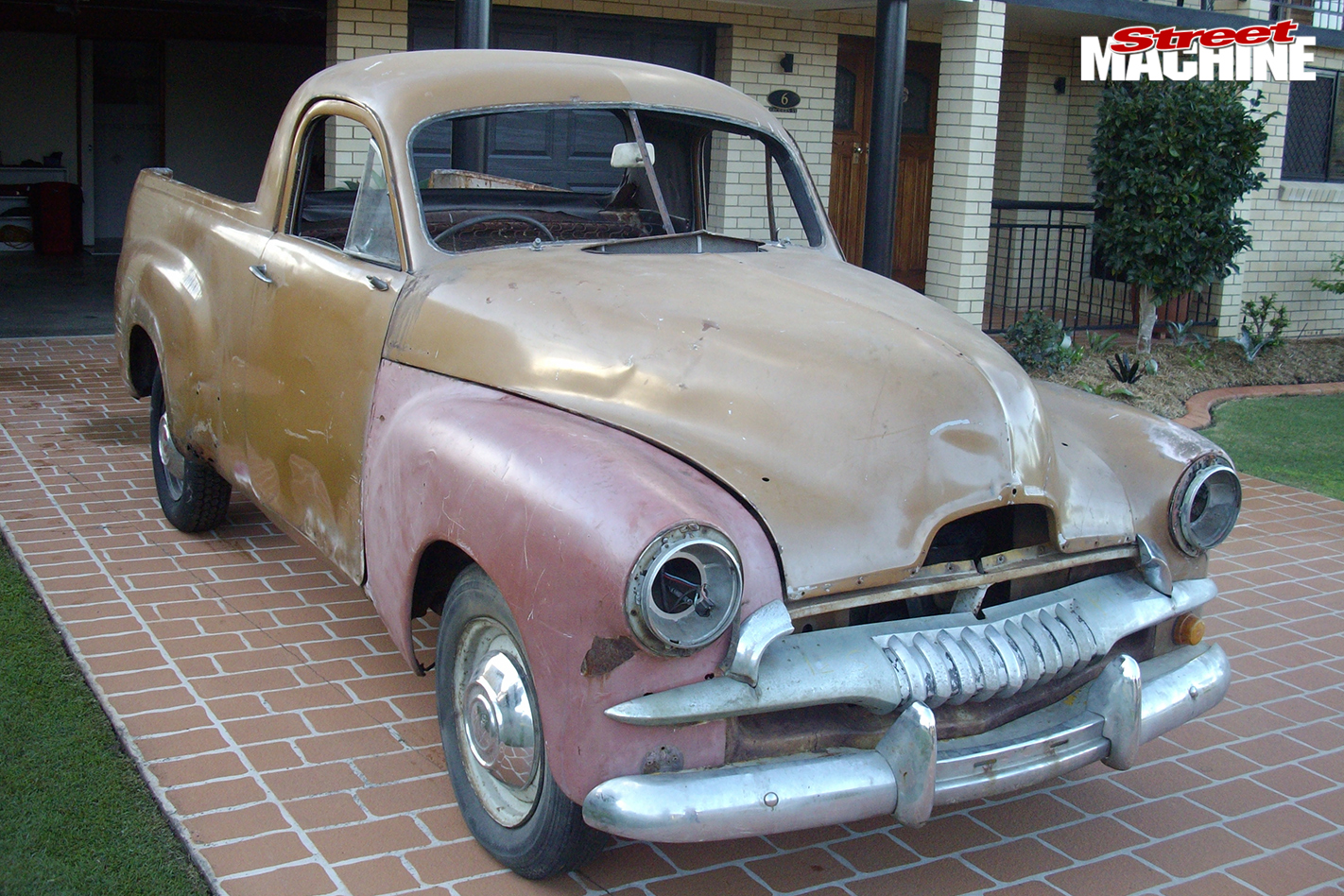 It wasn’t until it was backed off of the truck that the Ryan family saw it in the flesh for the first time. “Our youngest daughter Alice took one look at the dusty, straw-covered jalopy, turned to Lucy and said: ‘Mum, you can’t fix that, it’s too broken!’” Darren laughs. “It had sat in an old farm shed for years. It really looked like an old bomb, so that’s what we nicknamed it – the Old Bomb!”

The kids may’ve been doubtful, but Darren had a clear ambition. “I wanted mod cons in an old car, yet keep the original body and interior – the look of the 1950s, until you lift the bonnet!” 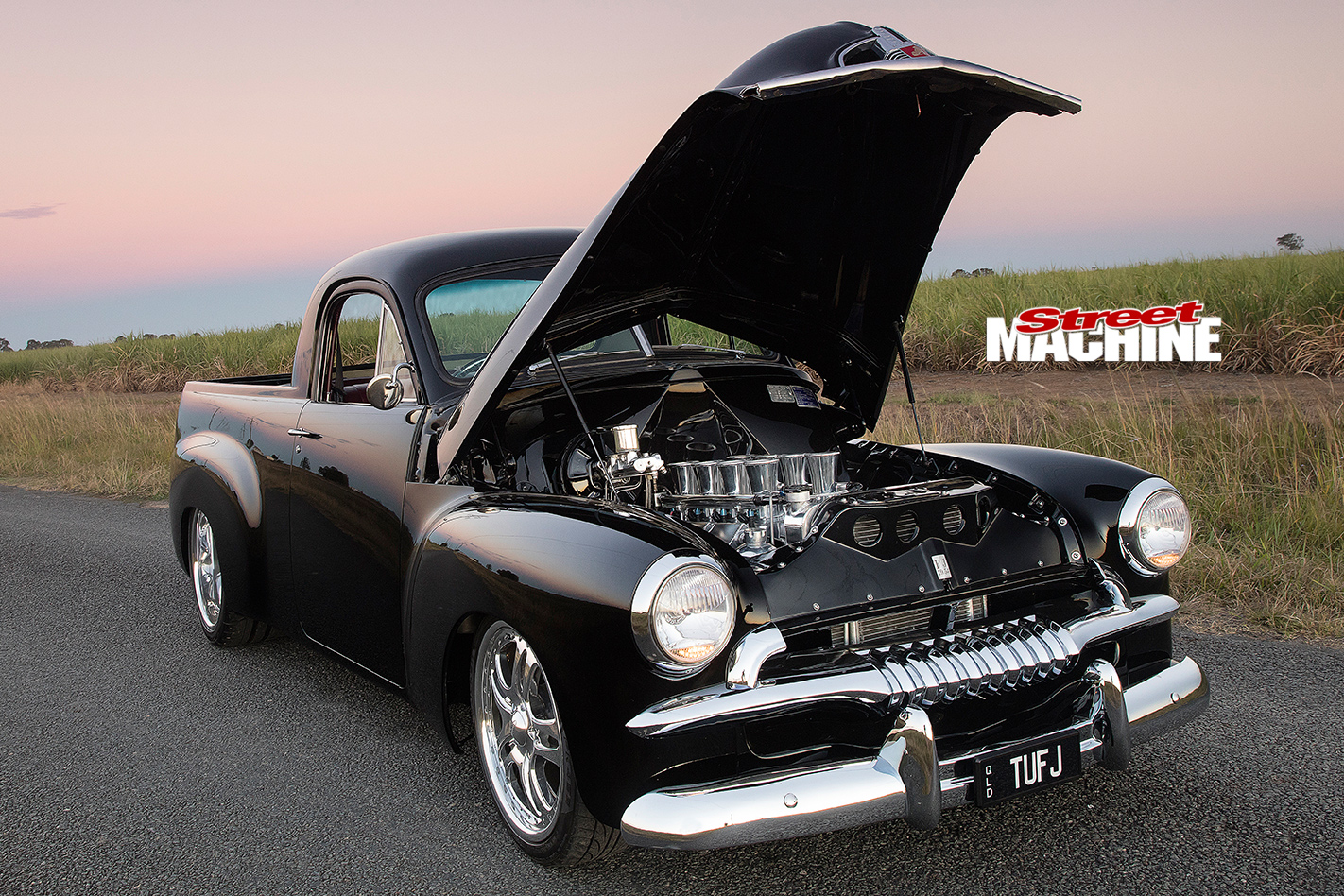 Darren wasn’t thinking of a hot straight-six either. Nup, he wanted to up the ante with an injected eight. To that end, he sourced a cheap VQ Statesman and ripped out its 5.0L, T700, electronics and other gadgetry. James at Full Race Fabrication was then given the ominous task of mating the ute with its four-decades-newer driveline. He went about recessing the firewall two inches, adding a Pat Gardner independent front end, massaging the floorpan to suit the large new gearbox, fabricating a fuel tank and popping in a pair of mini-tubs at the rear. 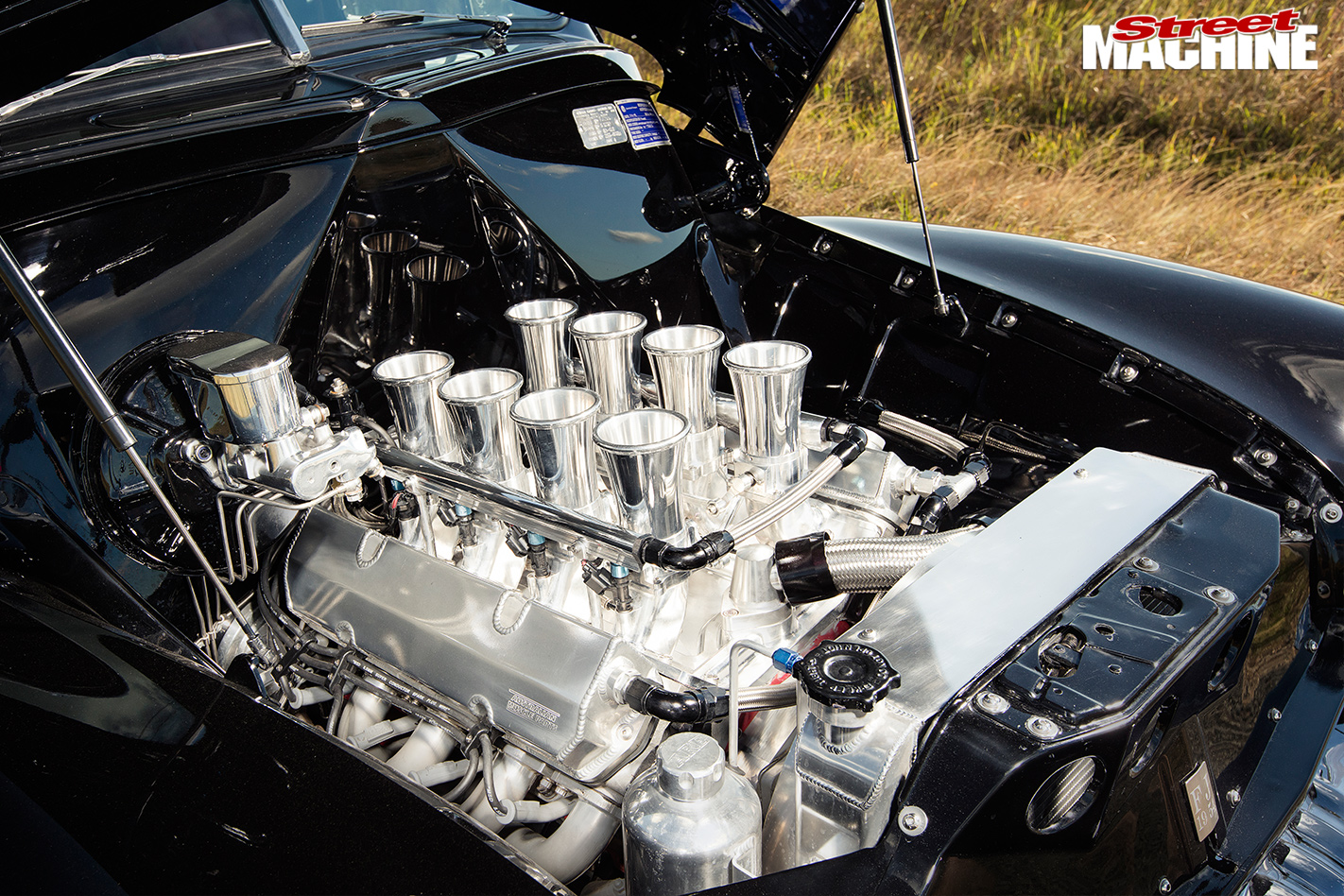 With the car all set up, Darren decided that sliding in a 304-cuber where a 65hp 132ci six once sat still wasn’t enough. So he had Daniel at DNS Automotive stroke it out to a beefy 396 cubes, and topped it with some super-sexy EFI trumpet stacks from Bliss Custom Machining. 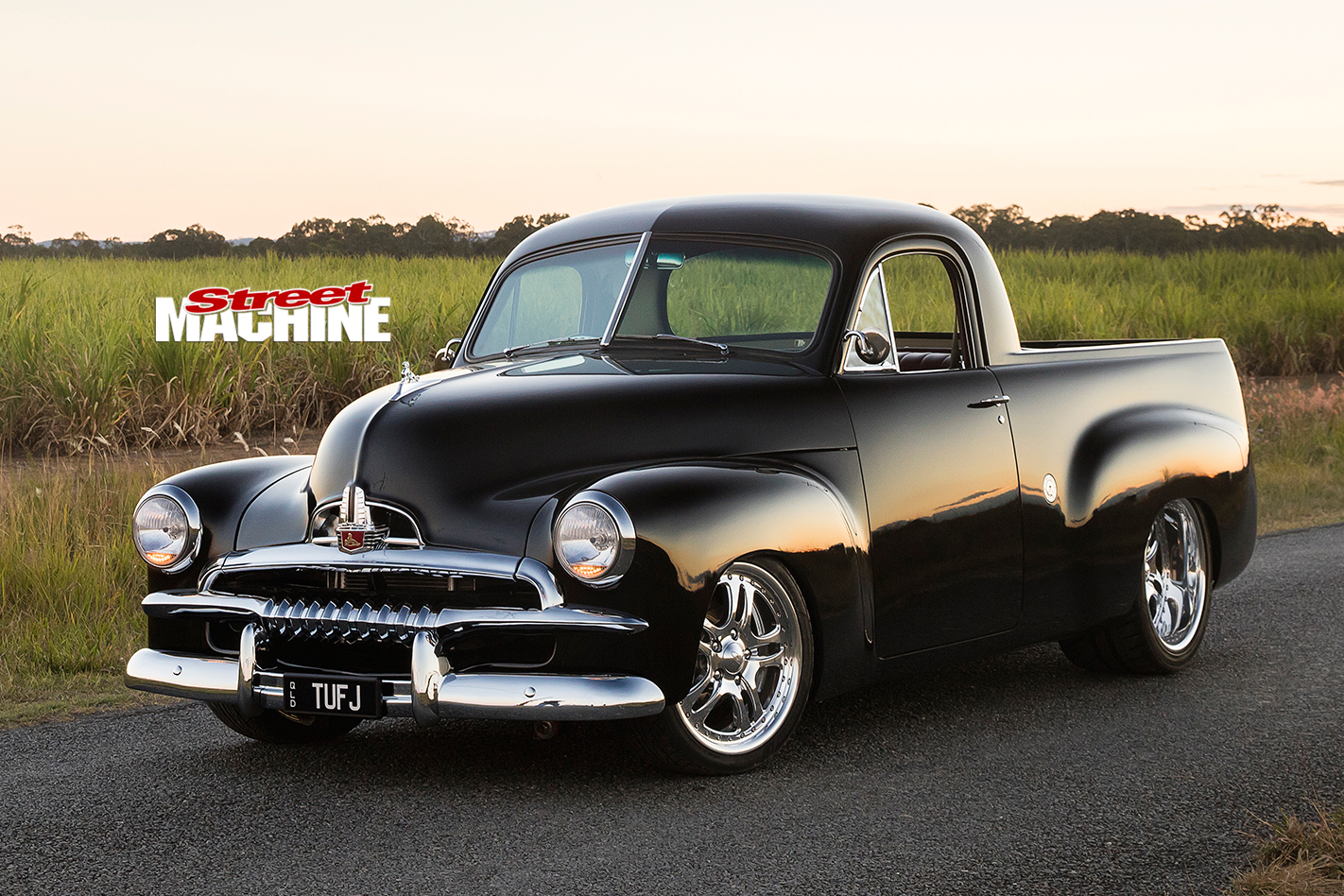 Getting the ponies to the road is a shortened VR BorgWarner diff with 3.45s, Truetrac LSD and 31-spline axles. VR Commodore slotted discs and calipers ensure the humpy pulls up smartly, and sitting snugly under all four corners are Showwheels KWC Forged split-spoke rims – 17x7 up front and whopping 18x11s filling the tubs up the back. 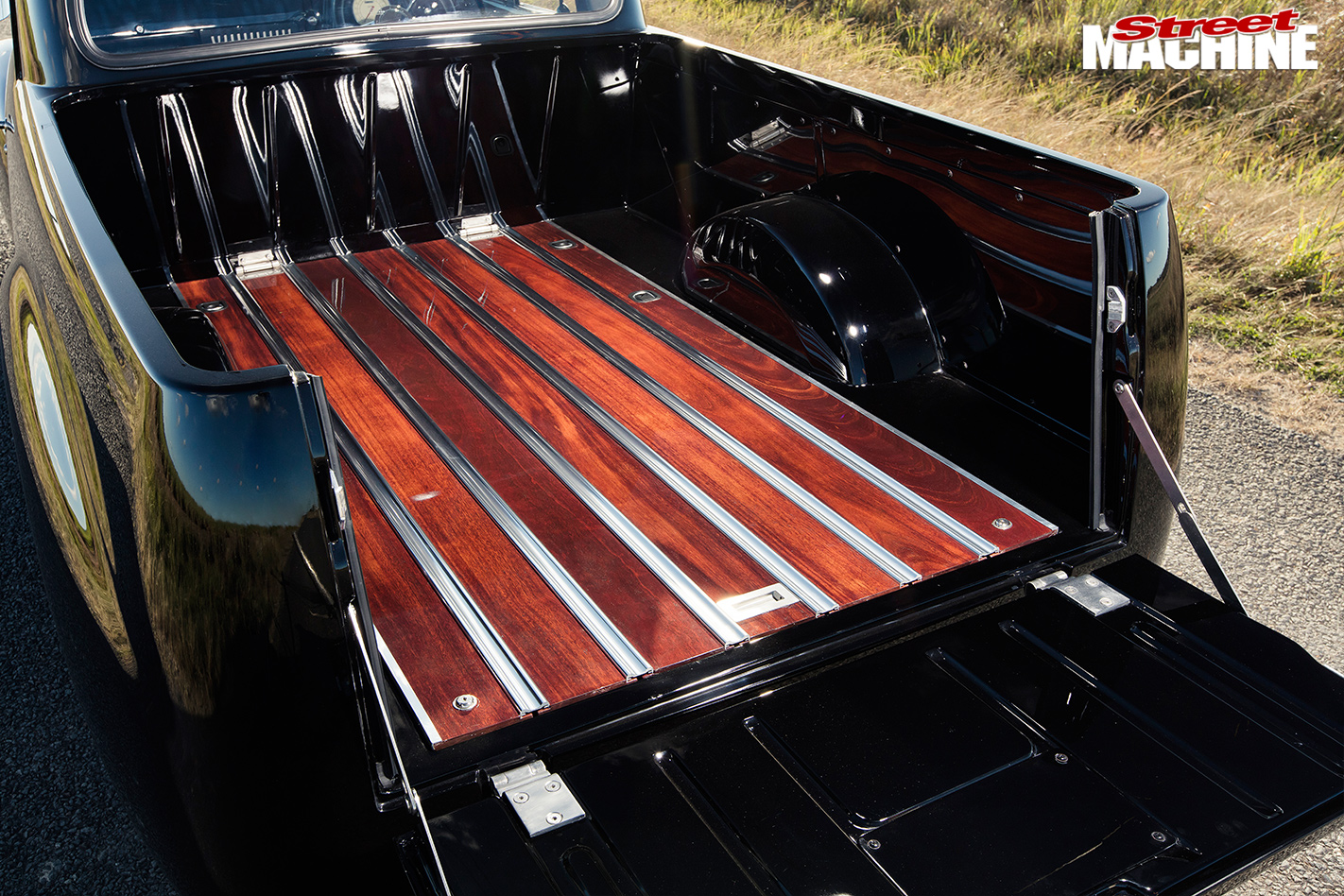 Yet it’s the striking cleanliness of the body, swathed in high-gloss black, that really smacks you in the face. “The biggest turning point of the build was the body,” Darren says. “Brett McHugh did all the work. He is one top bloke! He turned the Old Bomb into the magnificent machine it is today.” Brett spent a year finessing body, getting it arrow-straight in preparation for the unforgiving black hue. “Brett’s many years of experience and attention to detail have really shone through on this project. It still blows me away just looking at it!” Darren enthuses. 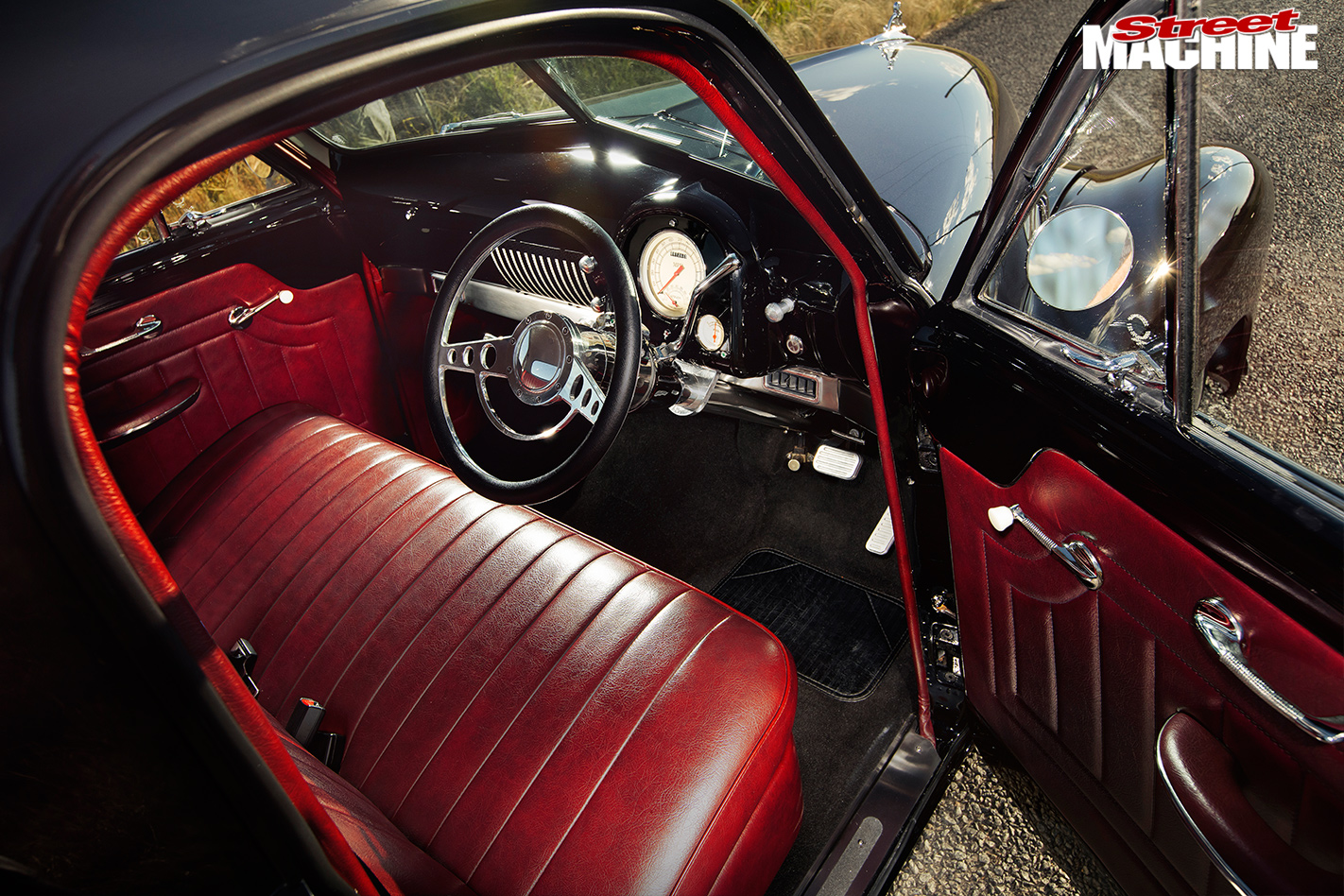 By comparison, the interior is demure. Darren’s vision was old-school cool with sneaky modern niceties. Dean McHugh (Brett’s bro) got the job and has kept mostly to spec, swathing the bench in Antique Maroon vinyl and the floor in practical black carpet. The only visibly new additions are the Flaming River steering wheel and column and the Vintage Air cooler housed in an attractive stainless piece, fabricated by mate Adrian Grey. 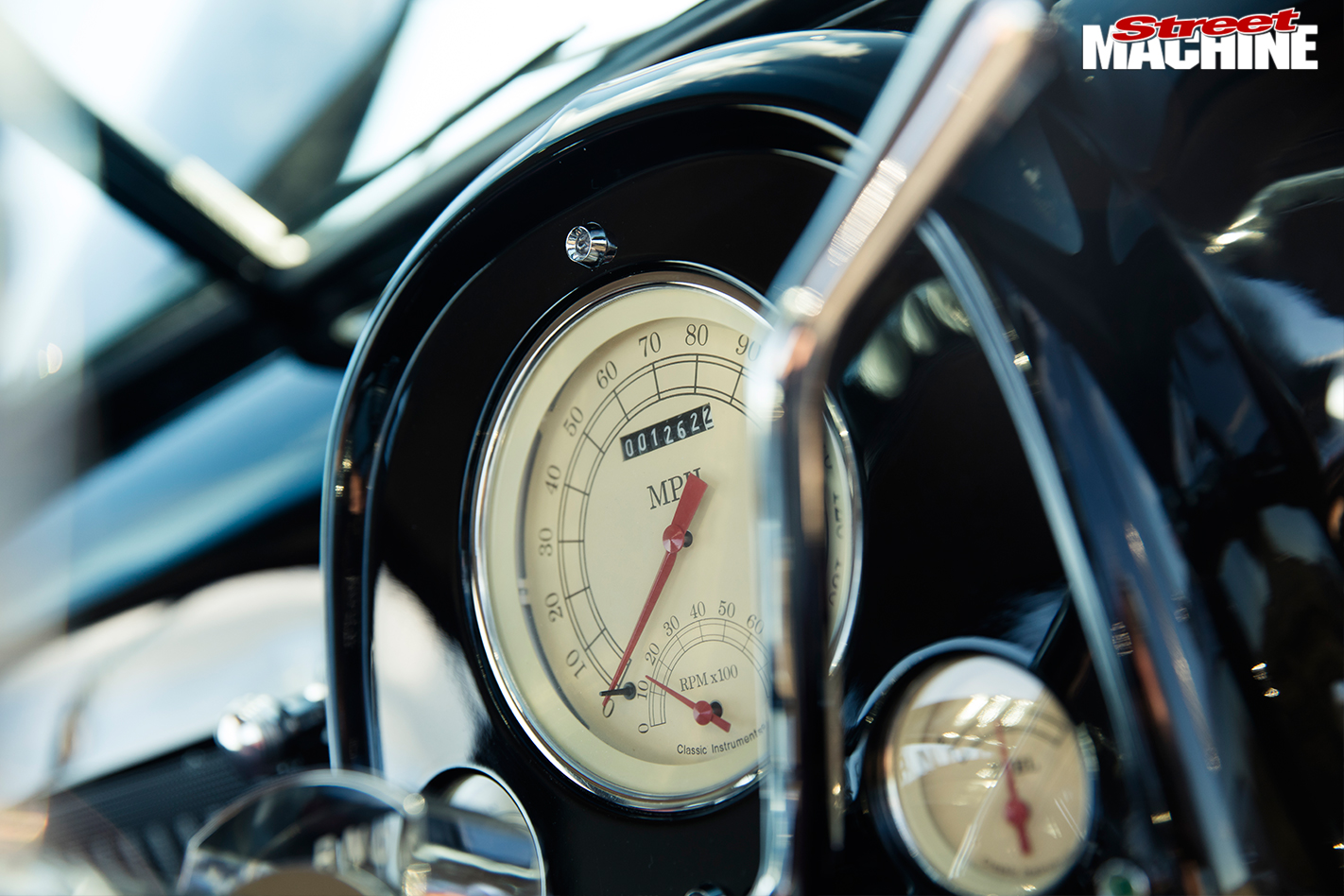 “Adrian made numerous stainless-steel items throughout the car – most are hidden,” Darren says. “The tailgate hinges were made to match the originals, and it took two days to hand-make just one hinge. Once he’d finished, Adrian told me to never ask for another pair!” 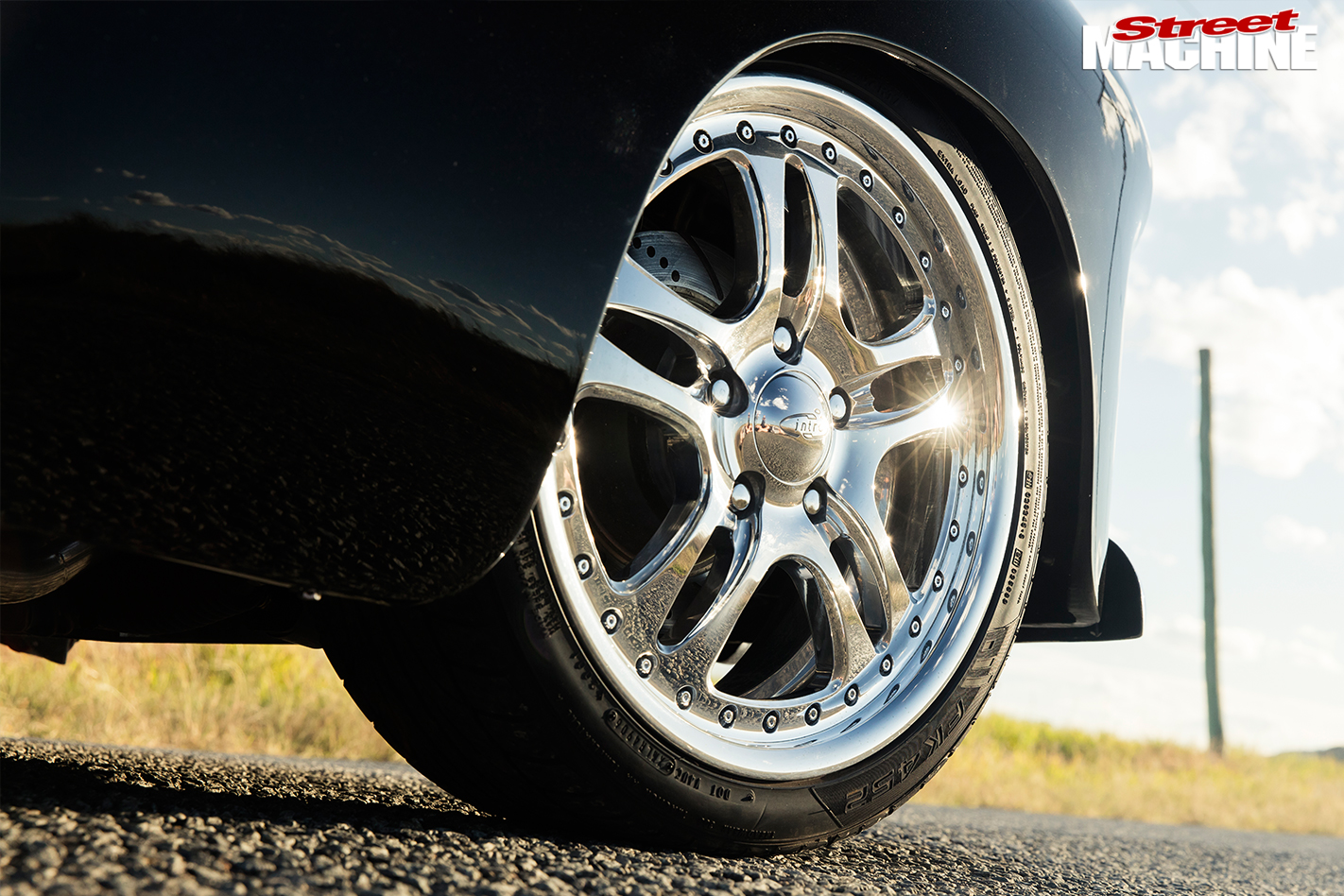 With the ute completed and looking the goods, Darren and Lucy decided to show it off a little. “We entered it into the 2015 Queensland Hot Rod Show. It was pretty nerve-wracking as we’d never done a show before.” They were chuffed to place third in Best Ute, so they returned this year – and took home first place! 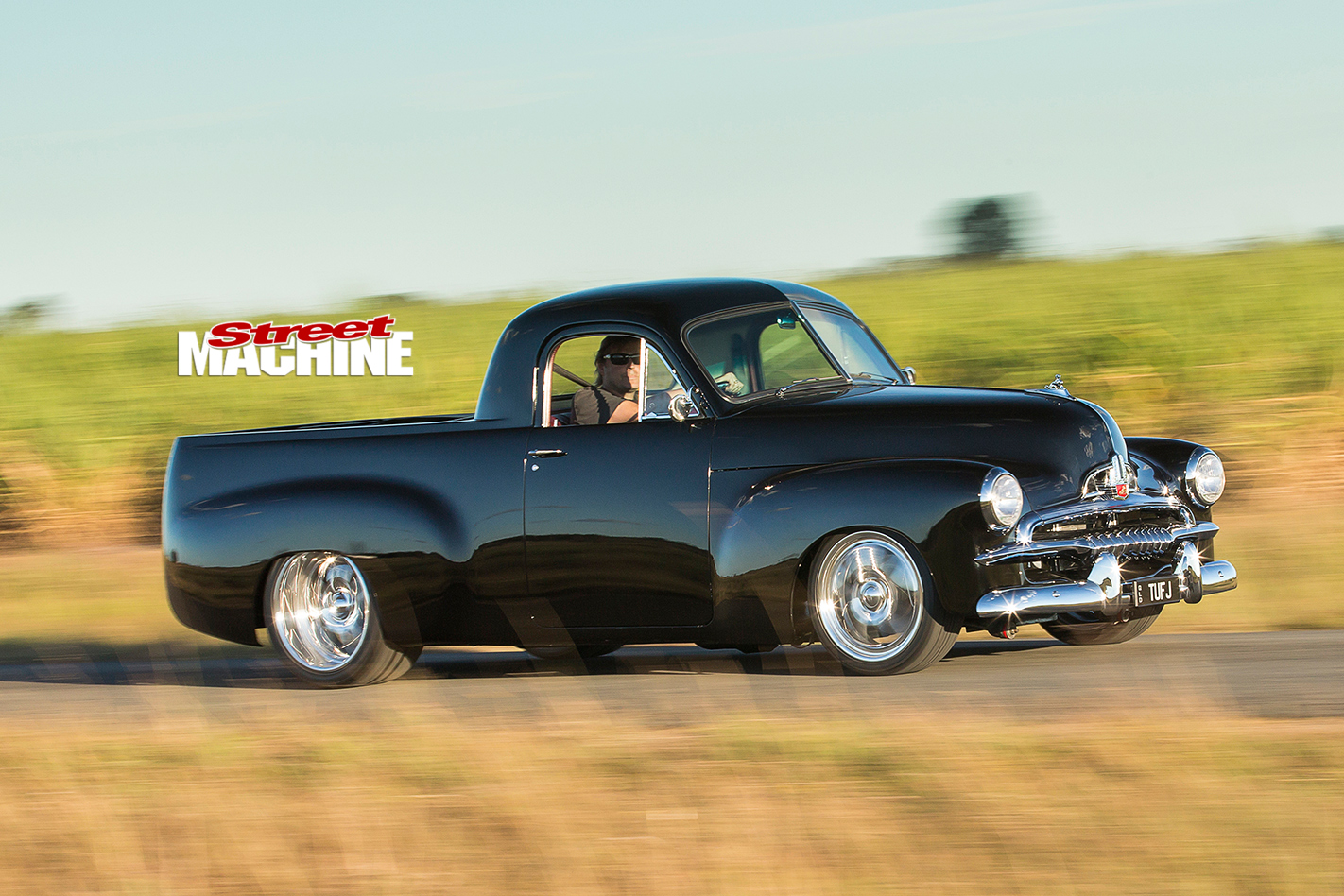 “It’s funny how things turn out,” Darren marvels. “I still pinch myself – I can’t believe we own it. But we still call it the Old Bomb and it is a driver – I take it to work every Friday and out on weekends when time permits. And it was great to drive out of the show this year with the kids in the front seat beside me.” 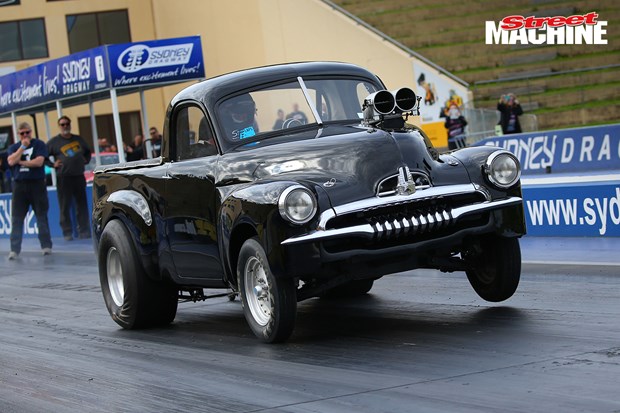