ADAM Styles is no stranger to horsepower. Last time we visited the Albury-based revhead, it was to check out his heavy-hitting VR Commodore ute (SM, April 2010). So what, you say? Well, with a Vortech-blown, 440-cube small block Chev, it was good for 1000hp on pump fuel. Out back it ran a tubbed rear, complete with a 9in diff and 305-wide Pirellis. Combine all that with a G-Force four-speed, and the ute was one seriously brutal streeter – a little too brutal in fact, especially for a bloke with a young family. “It was an amazing thing to have as a run-around, but it was a bit too much for my missus.” 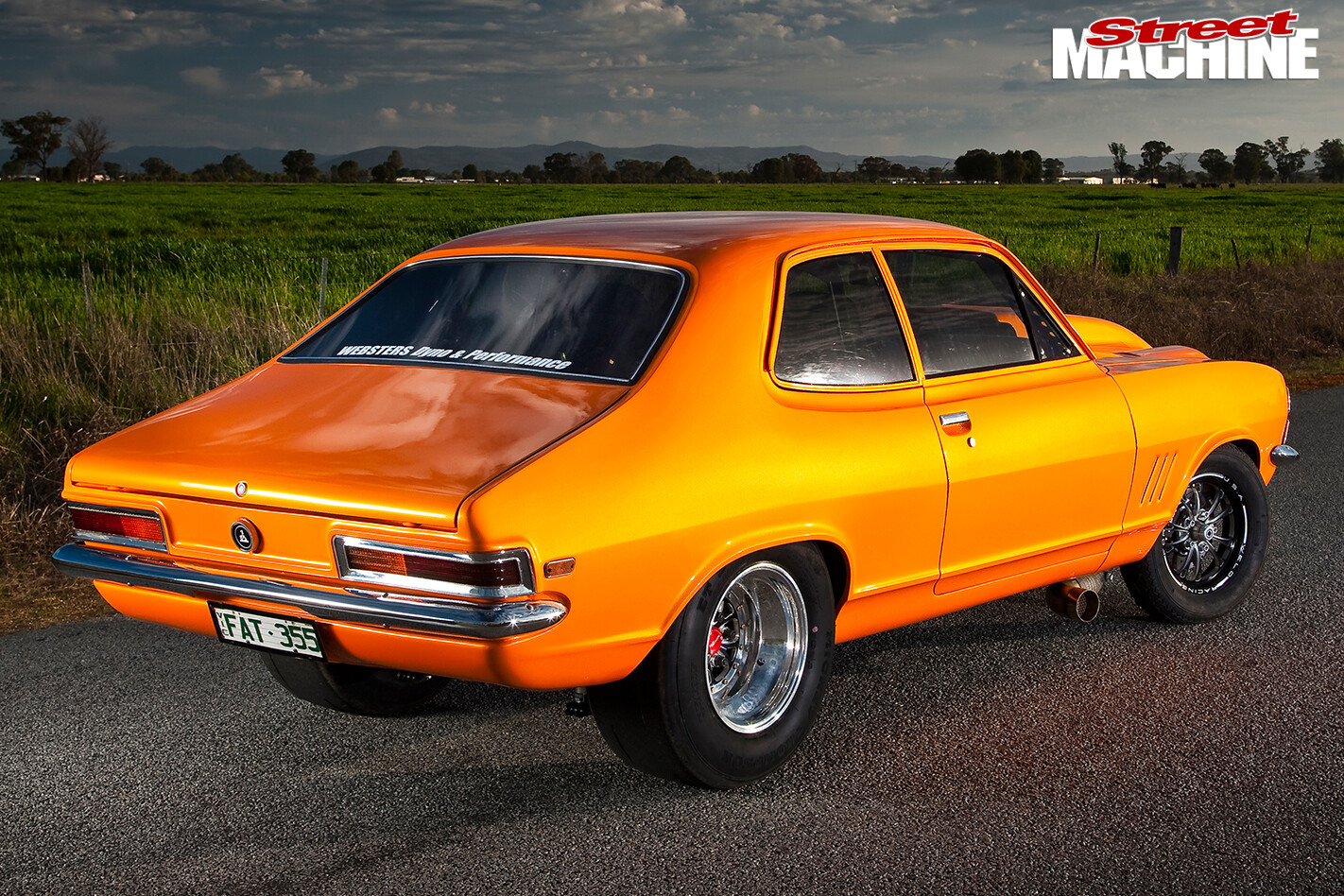 Adam’s solution was to sell the ute off and put the cash towards an LC Torana with even more horsepower. Genius! 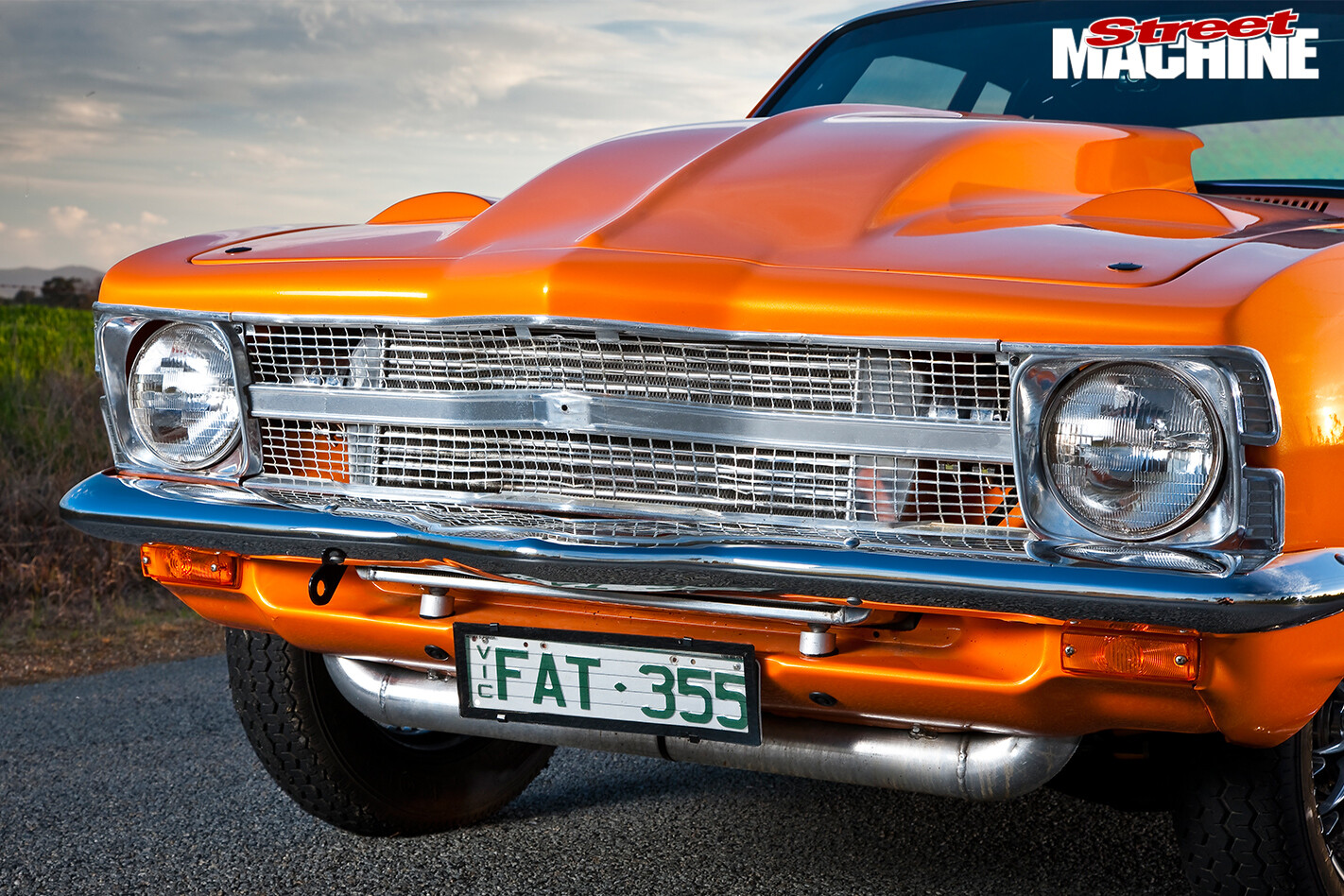 “The idea is that we can do the drag racing thing as a family with this car and get everyone involved,” he says. “I just love Toranas. I had a few LCs and LJs when I was younger, and we’ve got an SS hatch with an under-bonnet 6/71 as well.” 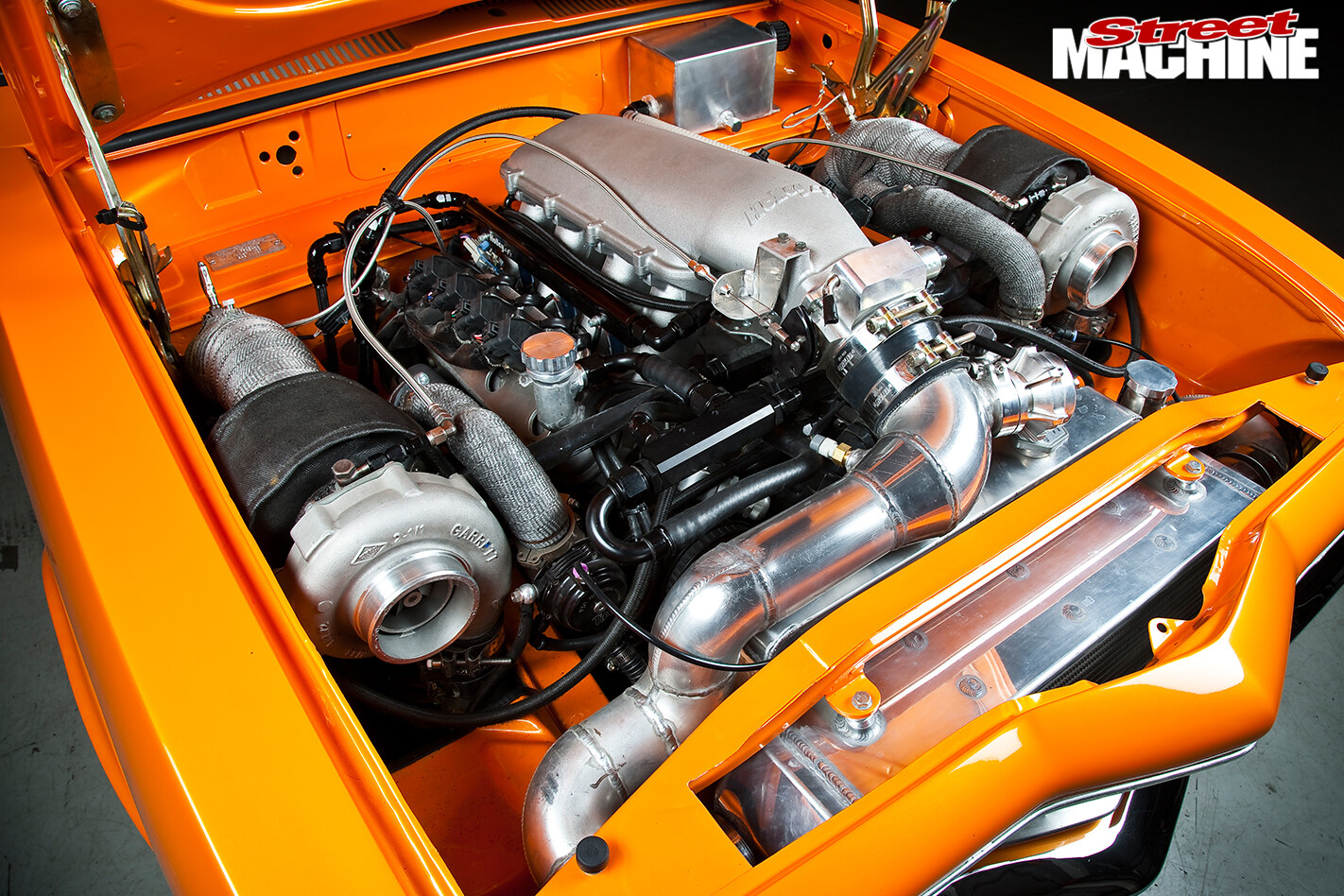 He bought the LC locally and once it was home he immediately started measuring the engine bay to see what size turbo they’d be able to fit under the bonnet without hacking up the inner guards. “Then we just started cutting,” says Adam, extending the rear quarters 140mm, tubbing the car and making the necessary incisions in the engine bay for an LS-based twin-turbo set up. 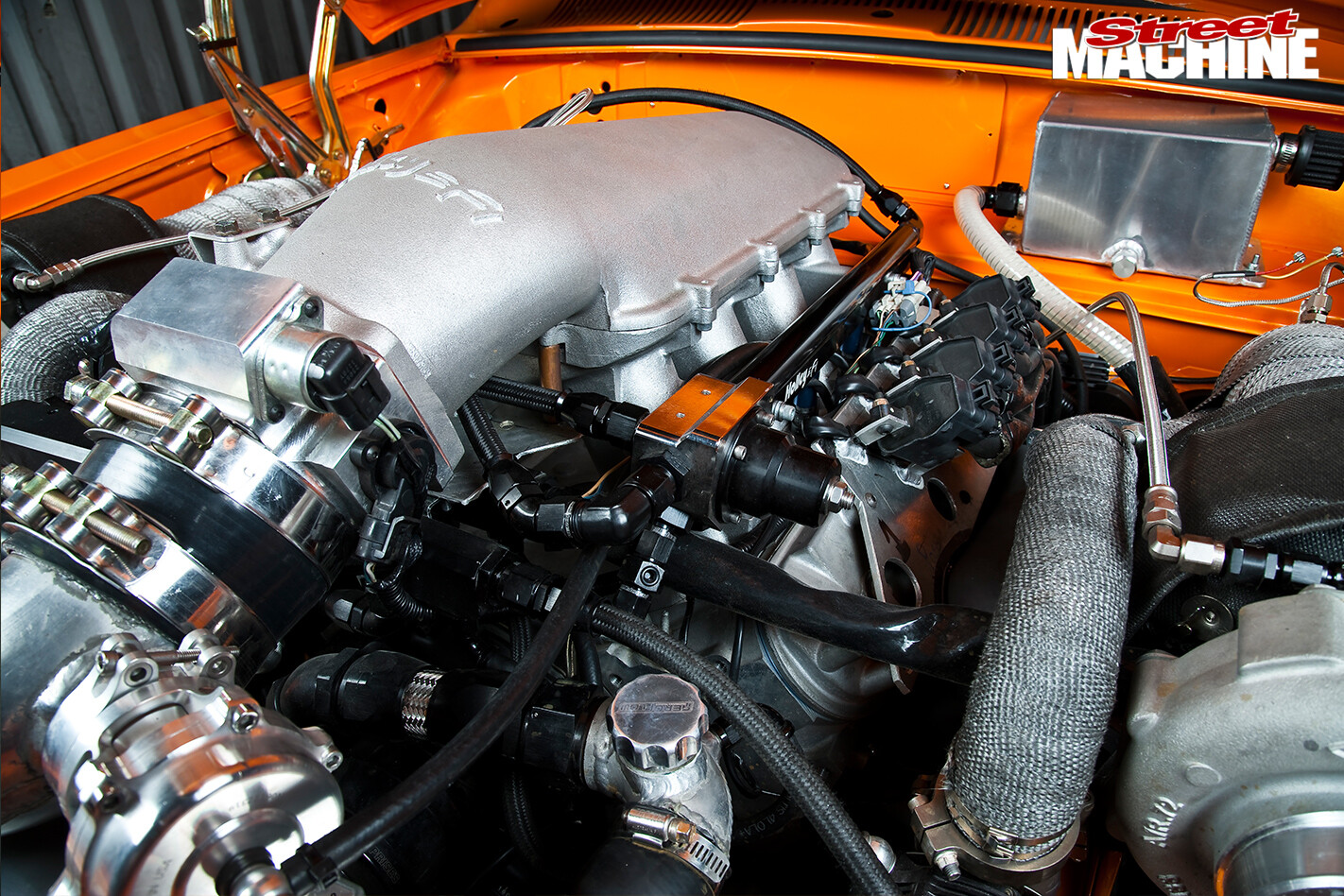 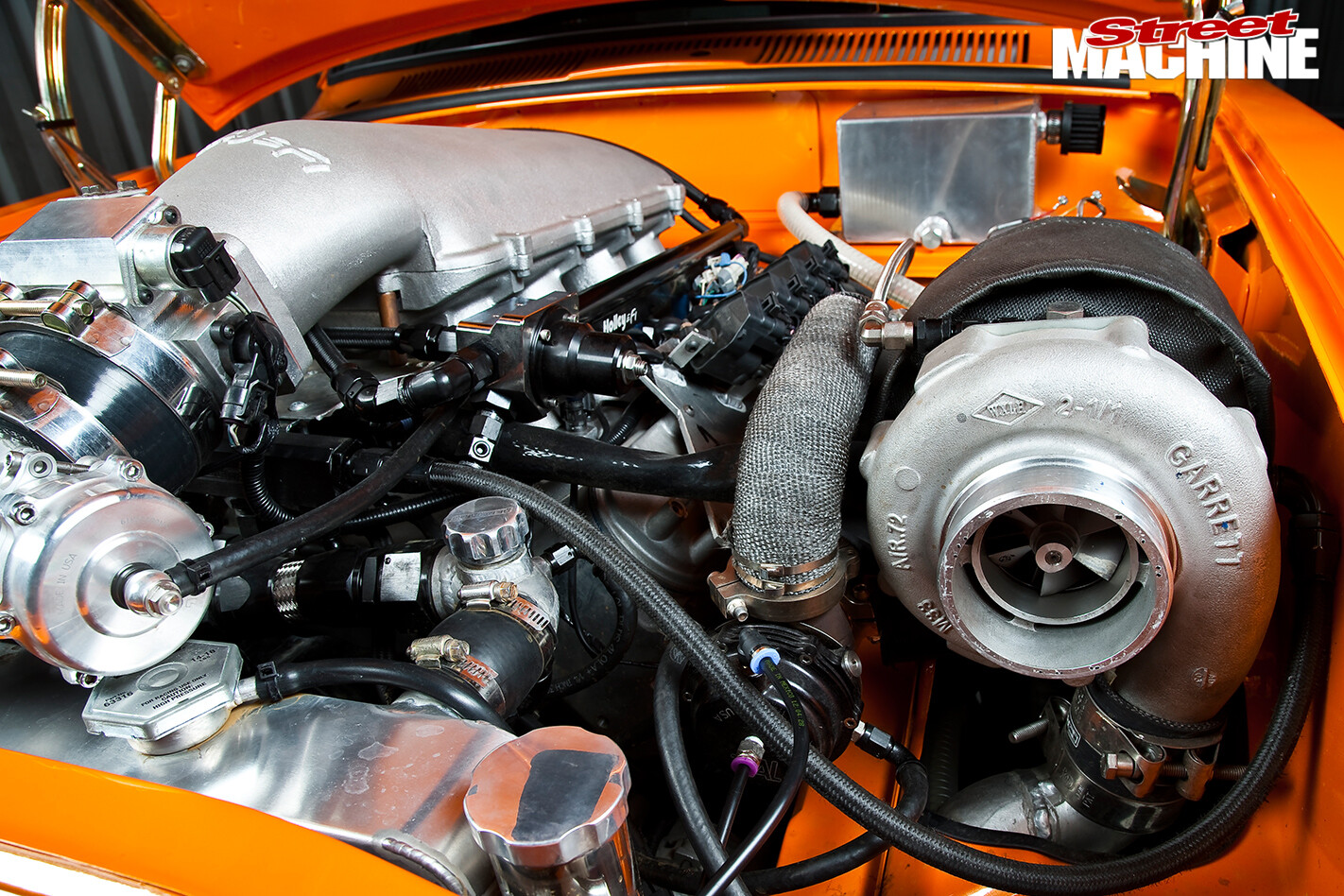 Adam installed and removed the engine from the bay up to 30 times during the assembly stage, ensuring a hassle-free fit that also complied with Mod Street rules, which prescribes the use of standard suspension and limits modifications to the factory firewall. 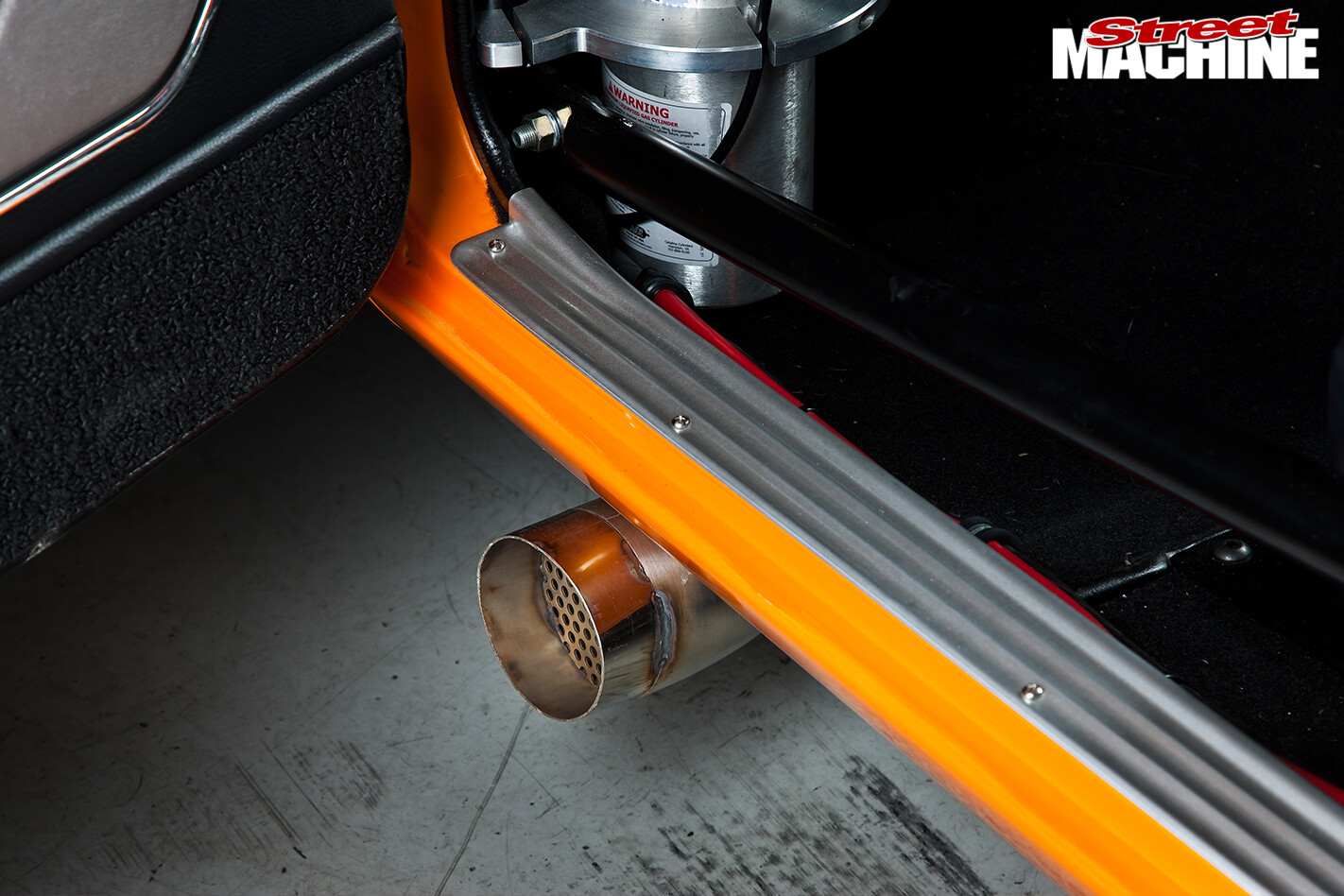 “Because the LS doesn’t have a distributor we’ve got within 10mm of the firewall and, with some material taken off the cross-member and an off-the-shelf Moroso sump, we’ve got the engine sitting nice and low in the bay. In fact, the starter motor is still on the driver’s side. It looks like it was supposed to be there.” 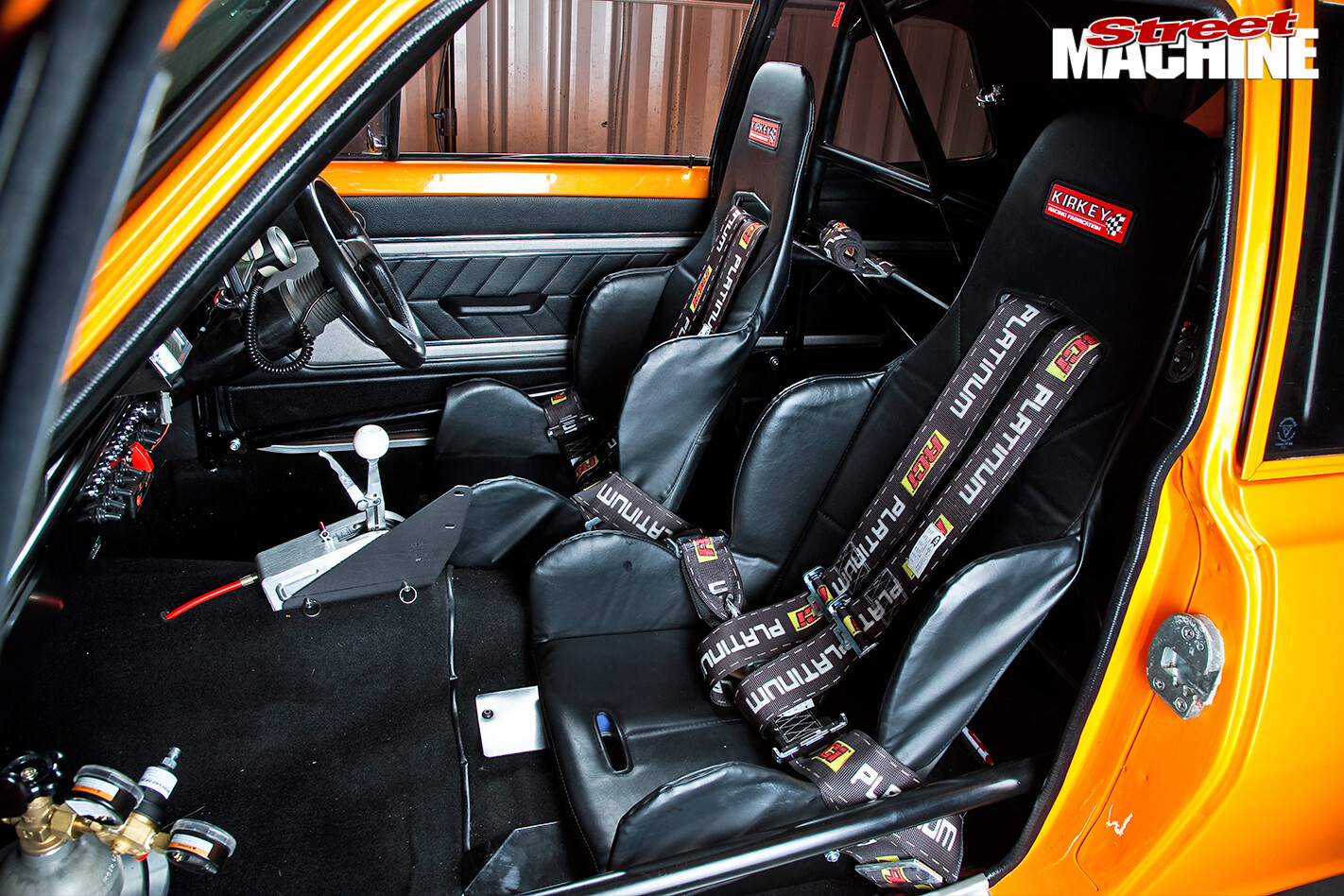 Using a cast-iron six-litre block for strength, Adam’s L98-based stroker engine rests at 408 cubes courtesy of a Lunati crank, Eagle rods and Diamond pistons. A hydraulic roller cam completes what is a simple, but effective combination. For the externals, Adam (who is a boilermaker by trade) fabricated his own exhaust manifolds, then got PWR to knock up an intercooler and plopped a Holley manifold and 102mm throttle-body on top. Turbos are GT4094s, with TiAL wastegates. “The secret to getting the power down is all in the electrics,” he reckons, alluding to the bevy of gadgets scattered throughout the car. Take for example the Leash Electronics boost controller, visible in the cabin where the Dedenbear C02 bottle sits in the passenger’s footwell, with its digital interface mounted squarely in the middle of the dash. “It’s totally automated and winds in boost over five stages throughout the run,” says Adam. The ECU itself is a factory VX Commodore computer so he didn’t have to deal with drive-by-wire. 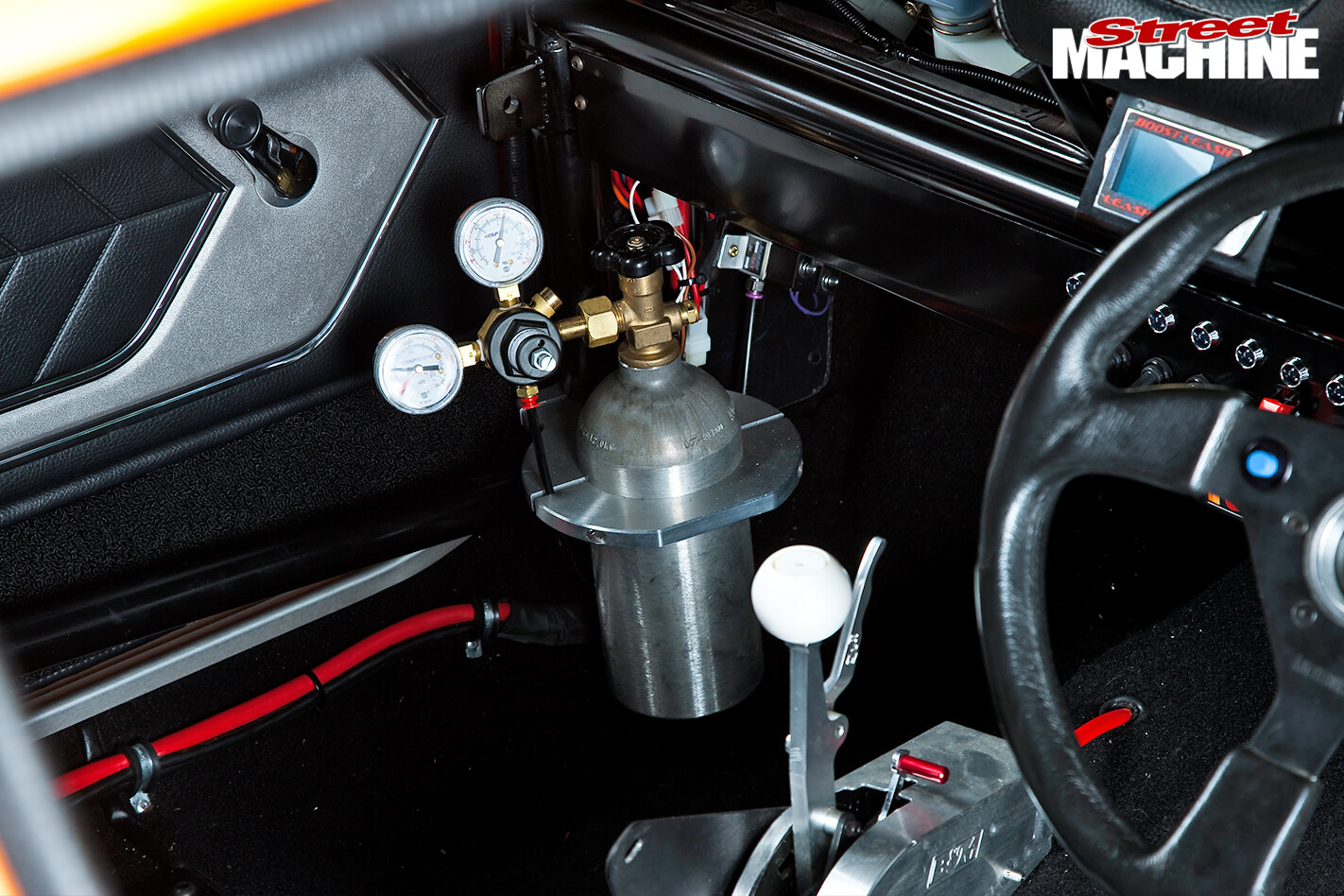 Behind the 408-cube LS is a two-speed ’Glide combined with a 3800rpm stall converter. “The Coan converter is used by some of the fastest cars in the world so it was the only choice. Plus, it’s fully serviceable by us – we can pull it out and pull it apart without needing to send it away,” explains Adam, reinforcing that both throughout the build and throughout its life on the track, he intends to remain very hands-on with the LC. 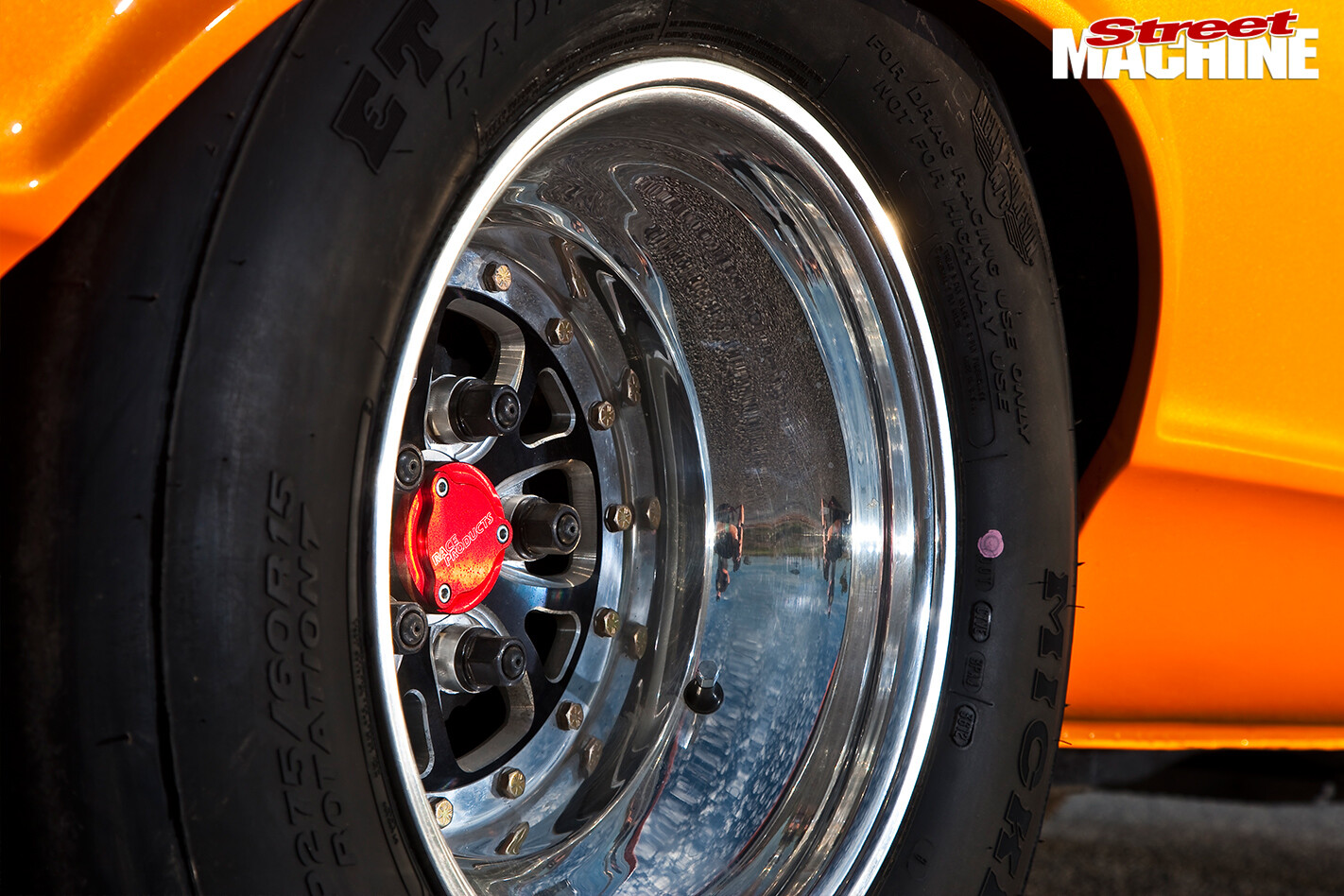 Interestingly, Adam has added a large ice-box to help cool the transmission. Filled with water whilst cruising the street and topped up with ice at the track, the heat exchanger keeps the gearbox cool and stops heat from transferring back up the driveline and into the engine, according to Adam. “With the extra length in the trans lines, we can carry plenty of extra fluid too,” he adds. 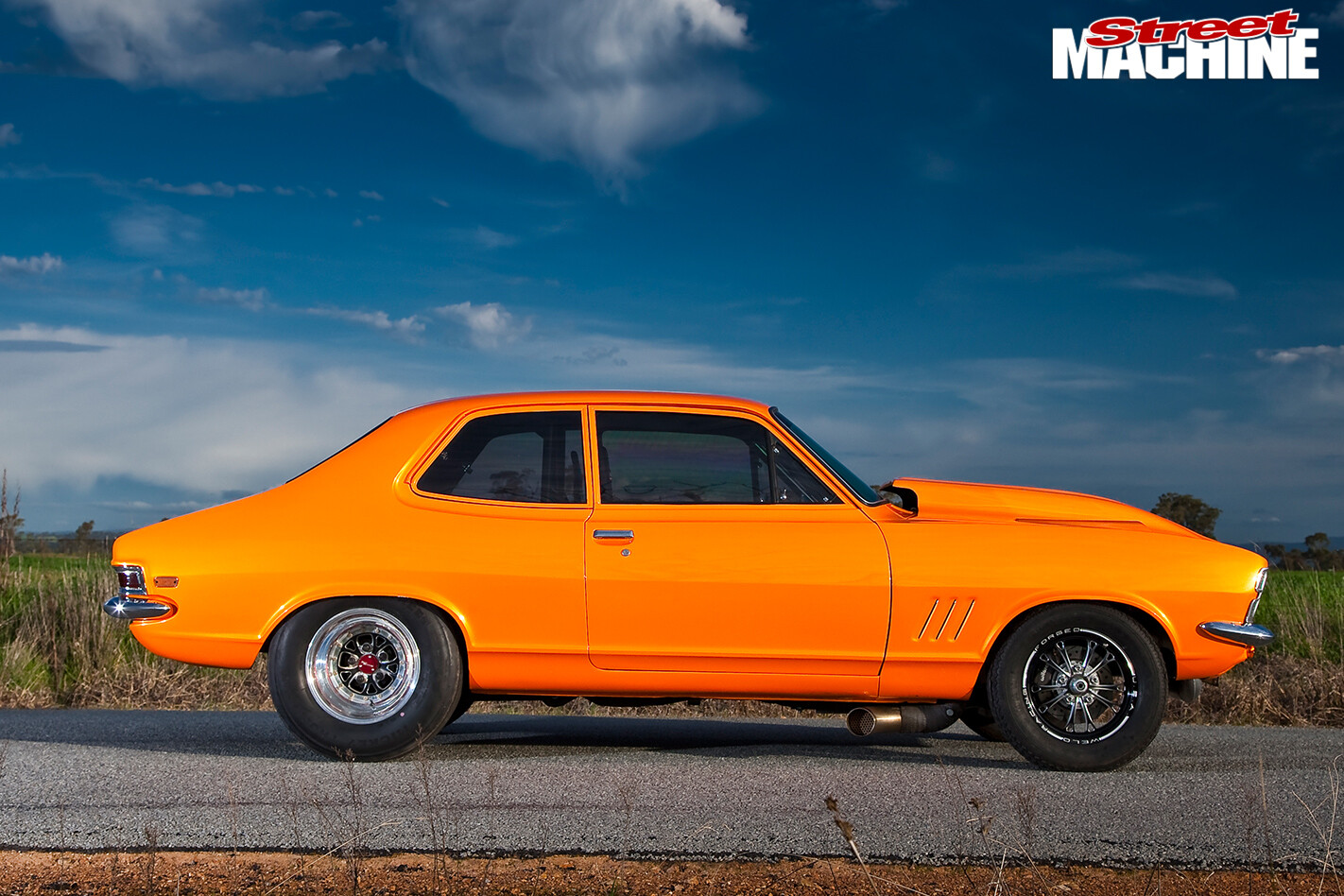 With the engine and driveline sorted, Adam reluctantly turned his attention to the finishing touches. “I wanted to paint it flat black, I just wanted to go racing!” he laughs, but admits that his wife and kids picked the vibrant orange colour. “I’ve tried to involve my family throughout the build, so that it’s not just me tinkering away out in the shed. Ange and the kids love the car scene, the next project will be a drift car for our son Caleb; LS-powered of course! “Ultimately I want to be in the Top 10 in either Mod Street or X275, but I’ve always had one eye on making sure we can put it on club rego too. That’s why we’ve tucked the cage up out of sight, plumbed back the wastegates, kept the standard engine management and kept everything under the bonnet. Eventually we’ll be driving it to the track to race it; now that’s a street machine!”