IF YOU’VE looked under the bonnet of Anthony Barbara’s sweet HR, you'll know it hasn’t got a red motor any more. If you're wondering what the hell it is, don’t worry — everyone in the SM office guessed wrong too. “Sometimes when it’s idling, you’d swear it’s got a red motor in it,” Anthony says. “It’s that close, it’s not funny. I’ve had people say: ‘That’s a nice red motor — Jeez it’s smooth,’ and then when I take off they’re like: ‘What the hell?’”

Okay, for those who didn’t cheat we’ll put you out of your misery. It’s 2.5 litres of Mazda V6 and while that might sound strange, there’s some method in this mechanical madness. You see Anthony’s had the HR for years now — seventeen to be exact, and the engine was starting to get tired. “It used to belong to Cooma Tyre Service and was used to pull bogged four-wheel drives out of the snow. It was a two-speed auto and that’s one of the reasons I bought it — automatics had the wider tunnel. And regardless of that I was going to cut the back off it anyway.” 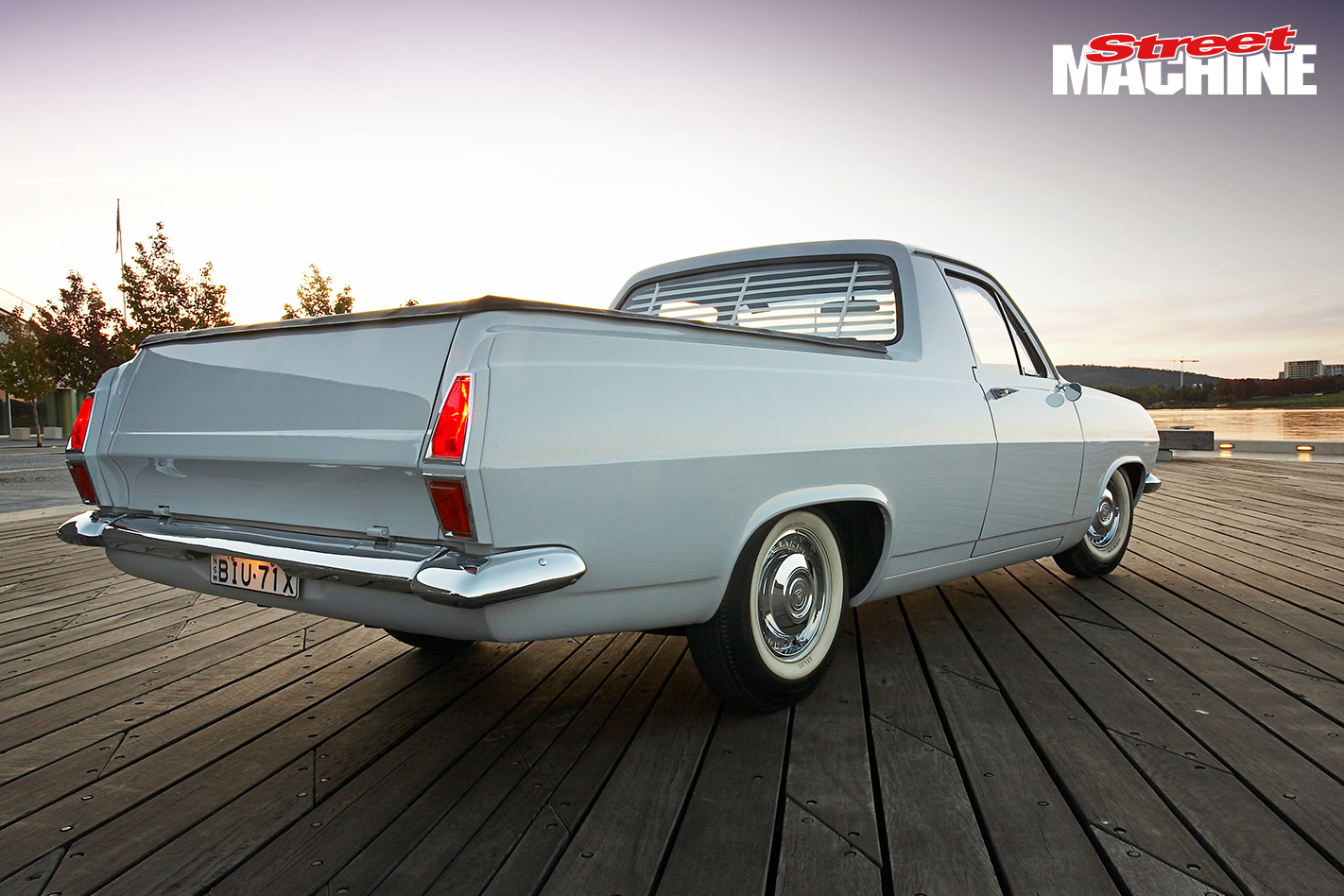 Have a look at the rear end and you’ll notice a set of HR lights, instead of the HD units fitted from the factory. “I’ve always wanted to do it,” Anthony says. “I always had HRs, always sedans. I thought: ‘Why didn’t the utes have the sedan back end?’ The station wagons do and look cool but the panel vans and the utes don’t.” So Anthony performed a skin graft on the old girl’s bum. Now she’s got an HR station wagon rear end, a smoothed tailgate to suit, and the upright spare. “I wanted the spare wheel upright because if you get a flat you don’t have to unload the whole car to get it out.”

After a three-year rebuild Anthony had the old girl up and running, with the interior trimmed and a nice little 186. This was around 14 years ago. “Yep, that paint’s about 14 years old,” he says. Despite a thief nicking his freshly prepped front panels during the initial build, everything else went smoothly. But even with a five-speed Supra box behind the 186, the ute still didn’t have the get up and go Anthony was after. “I said to Paul, a good friend, that I wanted to change the heart. I loved the whole car but it had a rock lobster under the bonnet. And he’s going: ‘What?’ and I said: ‘A rock lobster — all shell and no guts!’” Anthony recalls with a laugh. 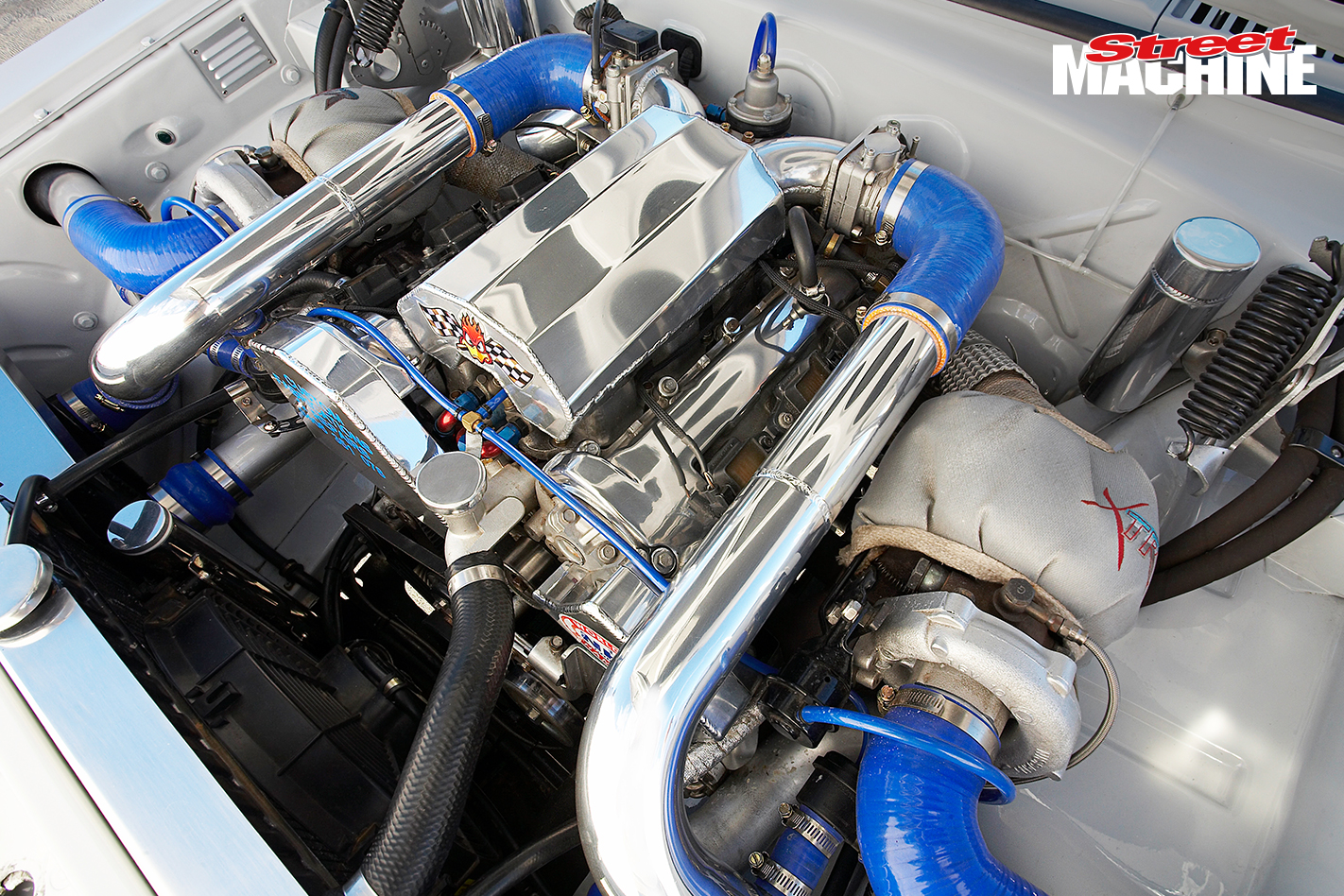 As it happens there was this little Mazda KL-ZE V6 sitting there on the floor of his shed. “Paul said: ‘Why don’t you put that in it?’ I asked what it was and he explained how it’s quad-cam. He said: ‘That little engine is so packed it’s not funny. It’s so well thought-out.’” As motors go, the boys could have done worse. The little Mazda gives up half a litre to the 186 but makes a hell of a lot more power. If fact it’s got more power stock than any Holden red motor-based six-pack, even the legendary GTR XU-1. The boys tore down the engine, played with its guts and liked what they saw — the KL-ZE is one tough little donk. Being a front-wheel drive engine they needed an adaptor to use a different gearbox and make it rear-wheel drive. On the advice of his mate Travis, Anthony took the ute across the border to M&A Engineering where Mick knocked up a suitable adaptor and a nine-inch diff to slip under the rear. 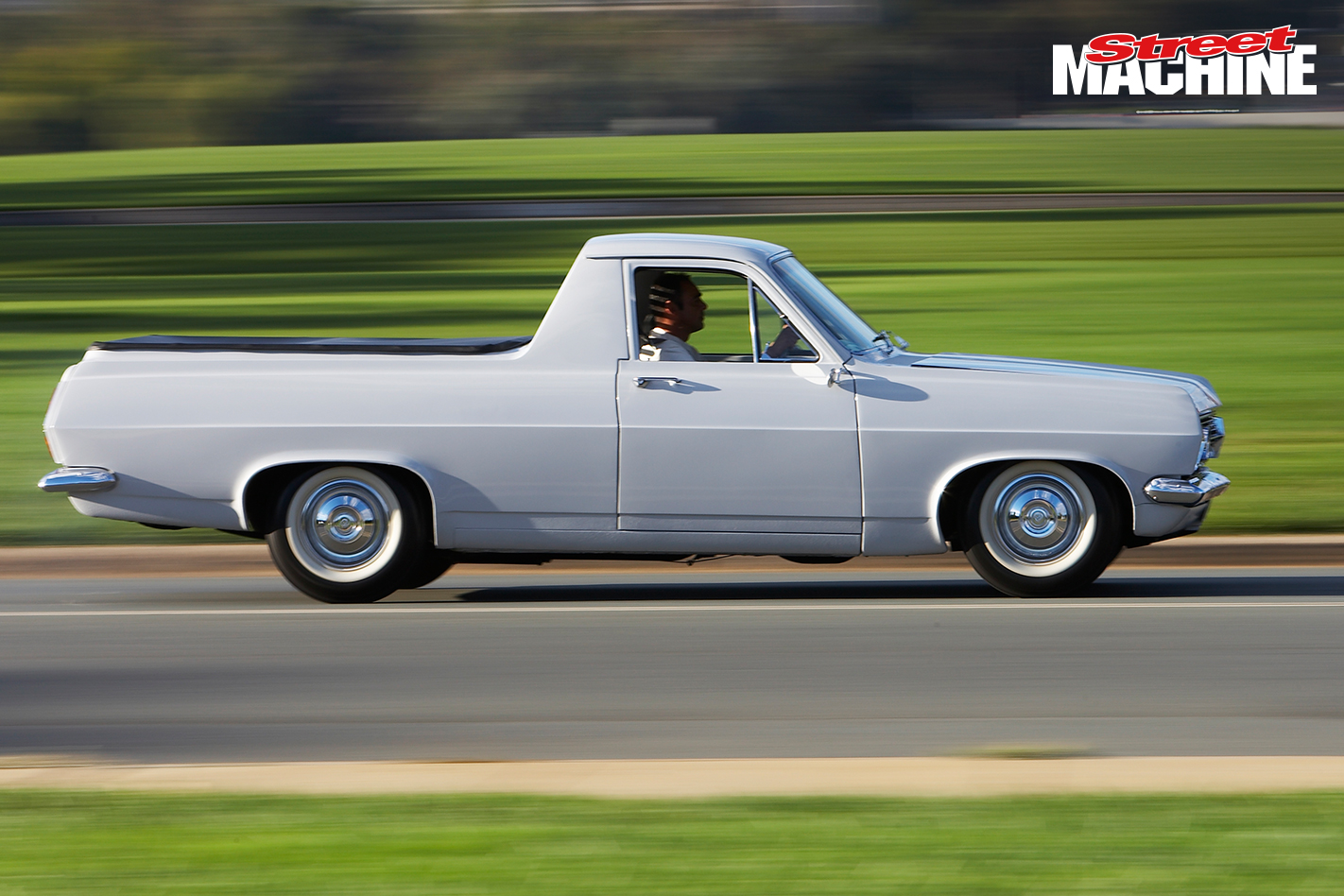 Naturally, the question: ‘What do you want to do with it?’ came up. Anthony’s plan was for a carby manifold, with the ECU running the ignition. But Travis, who already had a twin-turbo Holden V8-powered Hilux, said: “I’ve got any idea!” All of a sudden there were injectors, intercoolers, turbos and throttlebodies flying all over. But they still needed a suitable intake, so Eric from Custom Performance Fabrication & Welding whipped something up. “He said: 'If you don’t like it, I’ll start again.' And he came back with this. When I got it I thought: ‘It looks like a rocket.’”

Ben from Intune sorted out the fuel system, injectors and rails, along with the wiring of the Microtech LTX-10 ECU, which works with 1JZ Toyota coil packs. Internally, there are a lot of stock parts because not much needed changing. The factory 10:1 comp pistons were ditched for some customised forged Skyline pistons and Anthony says the heads, featuring reground cams, are off a three-litre, but that’s about it. 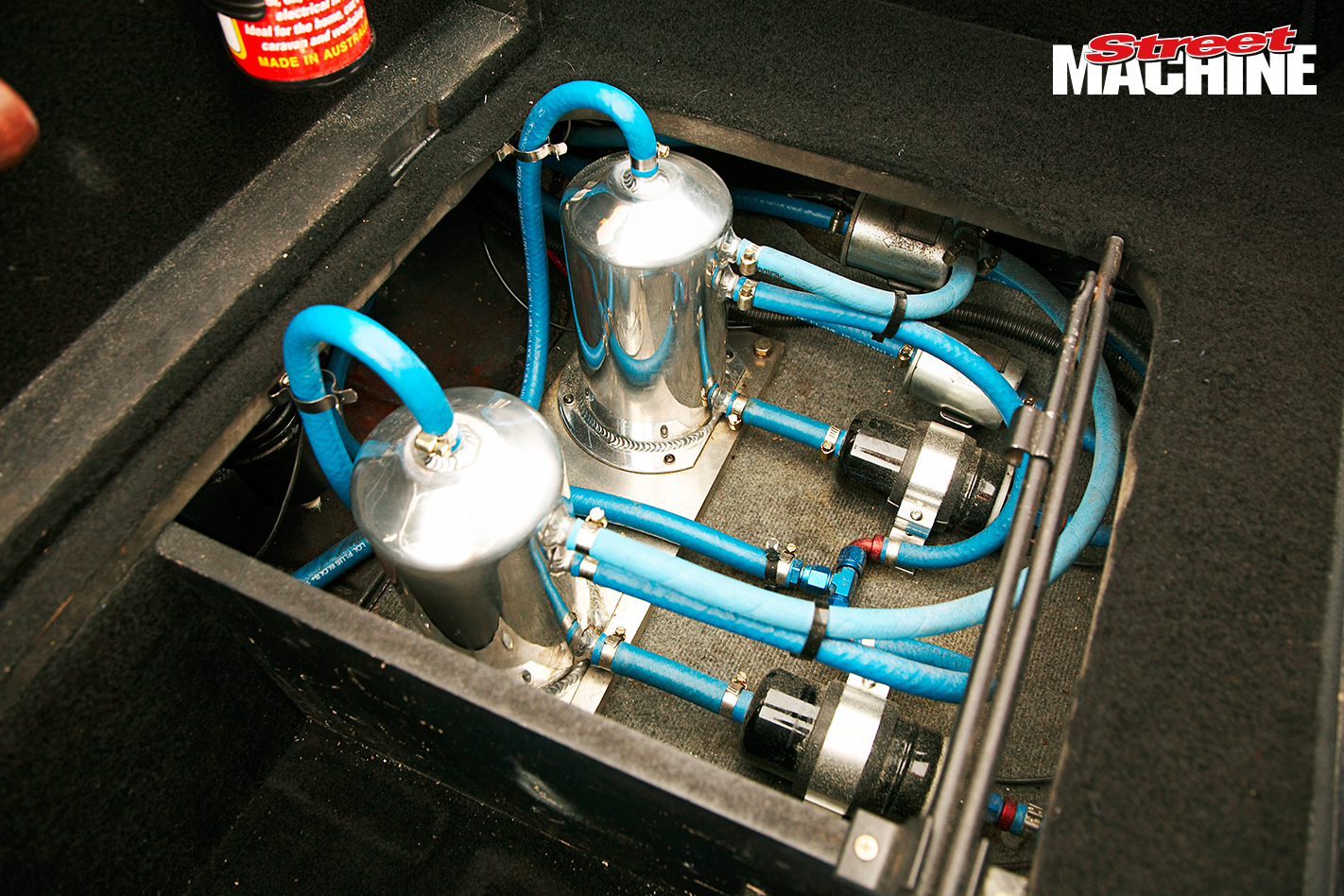 With the fairly small Nissan VG20 turbos pumping in between seven and 10 pounds of boost, the diminutive V6 really gets the old HR ute moving. In fact it does it a little too well, according to Anthony. “I’m going to change the diff centre in it and go a little bit higher because at the moment it’ll do 145km/h in second gear! HR’s aren’t really good at 170–180kays, and the thing just wants to keep going. I’m sure the body was going: ‘No more, no more.’”

Plus there’s the matter of stopping. “Stopping it? It’ll stop no problem," Anthony says. “It’s just those tyres don’t want to know about it. They want to keep going. I run no booster on the rear, that way it pulls up straight. If you run the booster on the back it'll kick to the side, so I had to take that off for the engineer's report.” 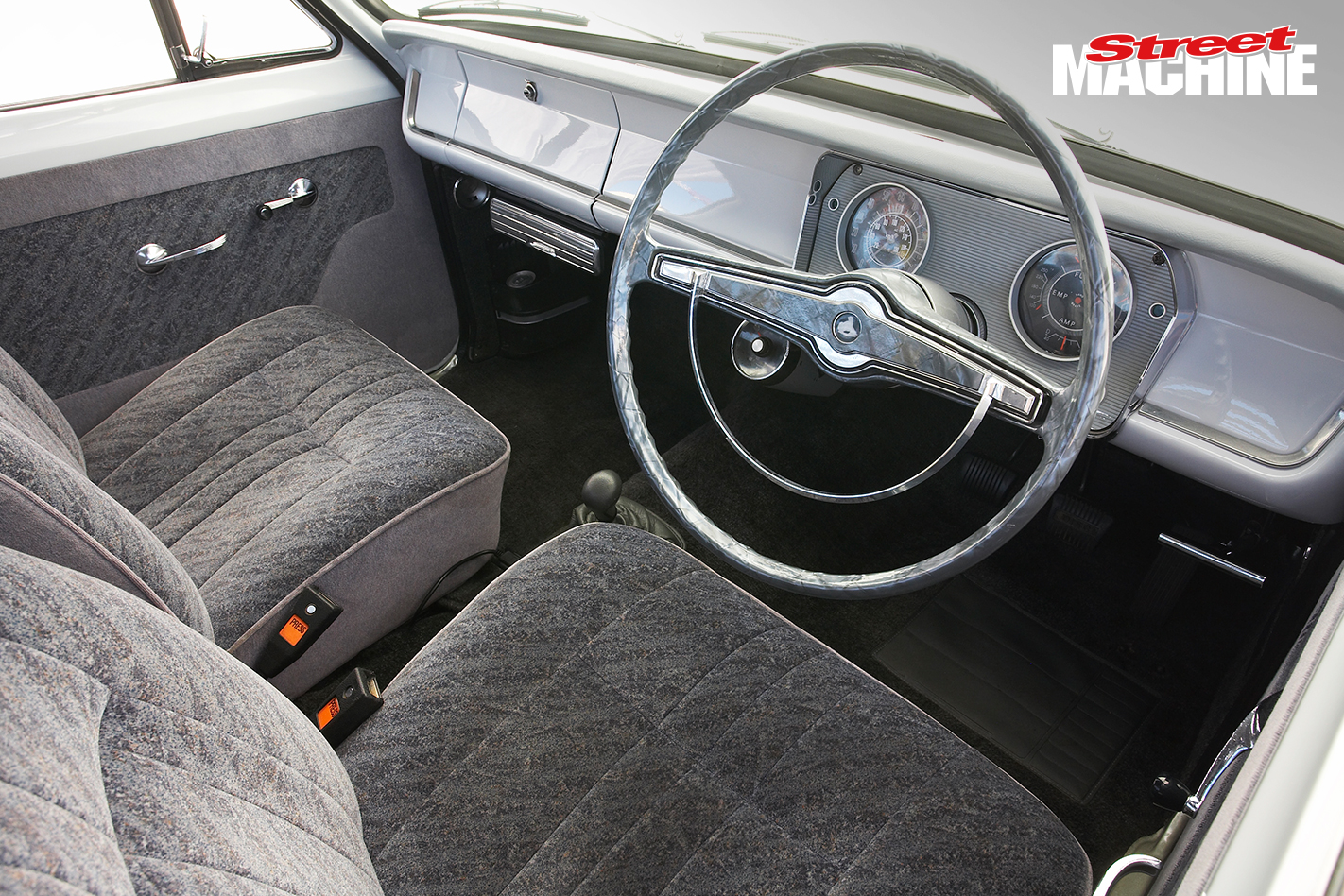 Since finishing the drivetrain transplant in December last year, Anthony says he hasn’t had the chance to click up many miles but he’s trying to correct that. “At the moment I haven’t even had it dynoed because I’ve only done 700km in it. I was waiting until at least 1000km before I stick it on a dyno. It’s just too young for that.” Then it’ll be back to Ben for a proper tune but Anthony doesn’t seem too fussed with what kind of power it makes — he’s pretty happy with the way it is now. Whatever the result, we reckon that the locals will be avoiding any HR utes at the lights, no matter what they sound like.