IT’S mid-morning and 40 degrees in a quiet Sacramento side street, Northern California. Scott Mugford wipes his brow and chuckles. His Blue Collar Customs (BCC) shop has just finished work on their third car for Metallica’s frontman, and all-’round car guy, James Hetfield and Scott still can’t quite get his head around how far he has come. 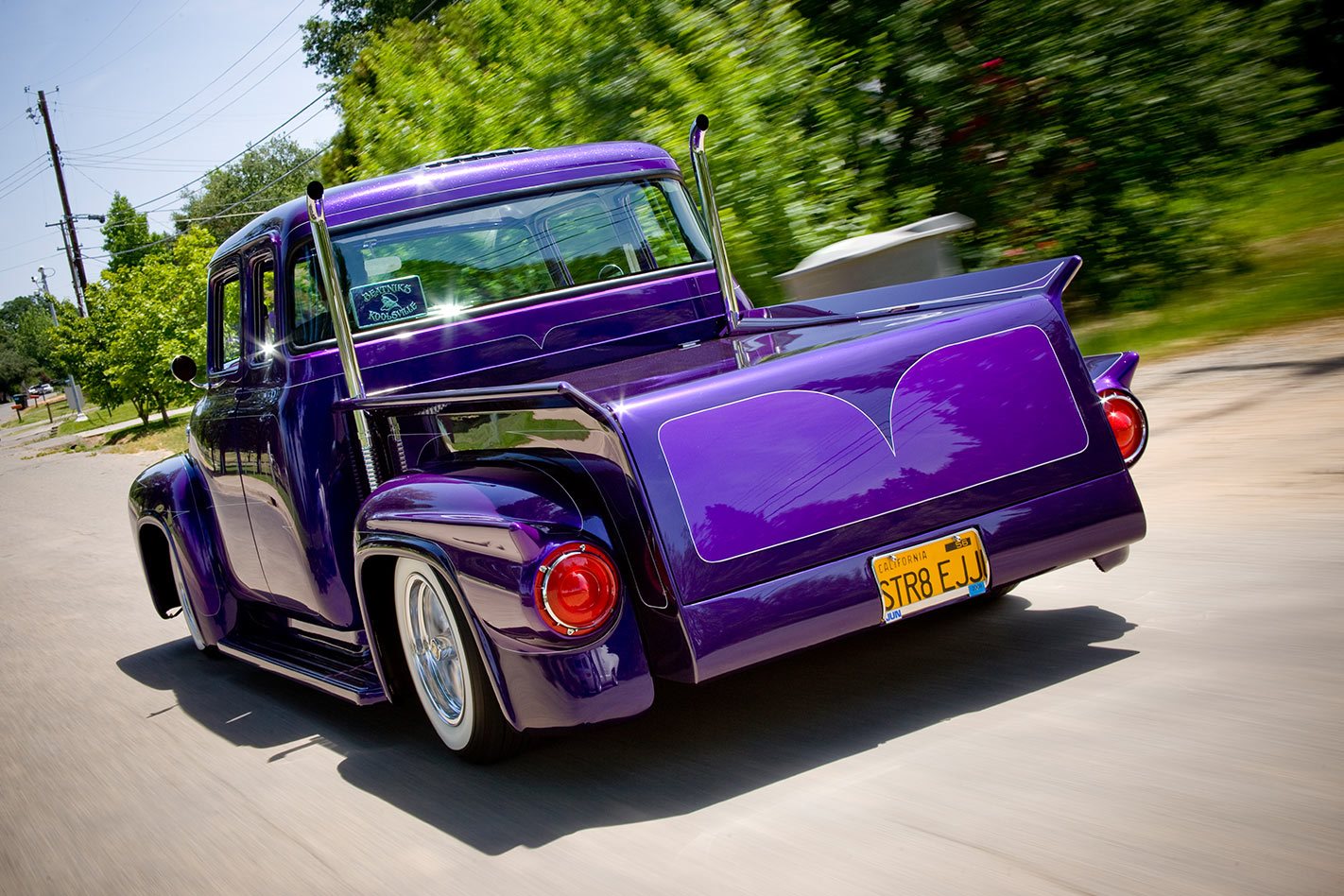 Now let’s face it, a guy such as Hetfield has money to burn when it comes to cars. Veyrons, Ferraris and Lamborghinis are all just a phone call away.

But thankfully this is no tell-tale about a spoilt media star with more money than sense. Nor is it the story of a Johnny-come-lately rodder throwing hissy fits over the smell of the fresh leather in his shiny new cab. Quite the opposite, in fact. 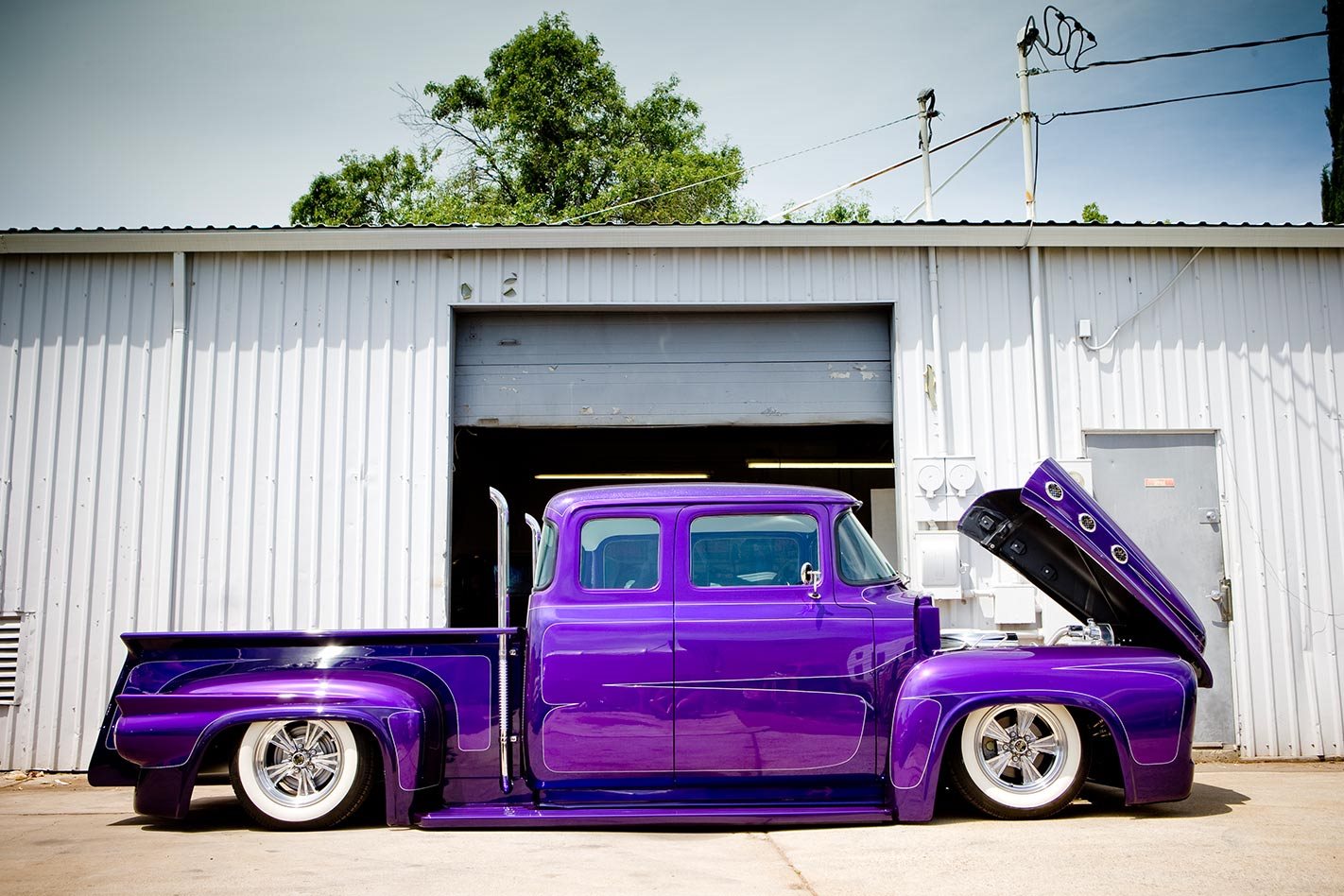 Scott met Hetfield in 2004 at a show in San Francisco. The singer was impressed with a Model A rod he had there and afterwards the two men kept running into each other at various car shows in and around northern California. It wasn’t long before Hetfield commissioned BCC for his own Model A, which was never finished.

“Remember, all this happened back in ’04 when the Rat Rod scene was huge,” points out Scott with a stroke of his beard. “James was kind of into some of that stuff, but his style was growing and changing really quickly at that time. He was moving much more towards finished Kustoms rather than rough, but safe, beaters. But it’s still kind of a shame that car never got finished. It has a 427ci motor, roll cage, drilled everything. It’s really neat.” 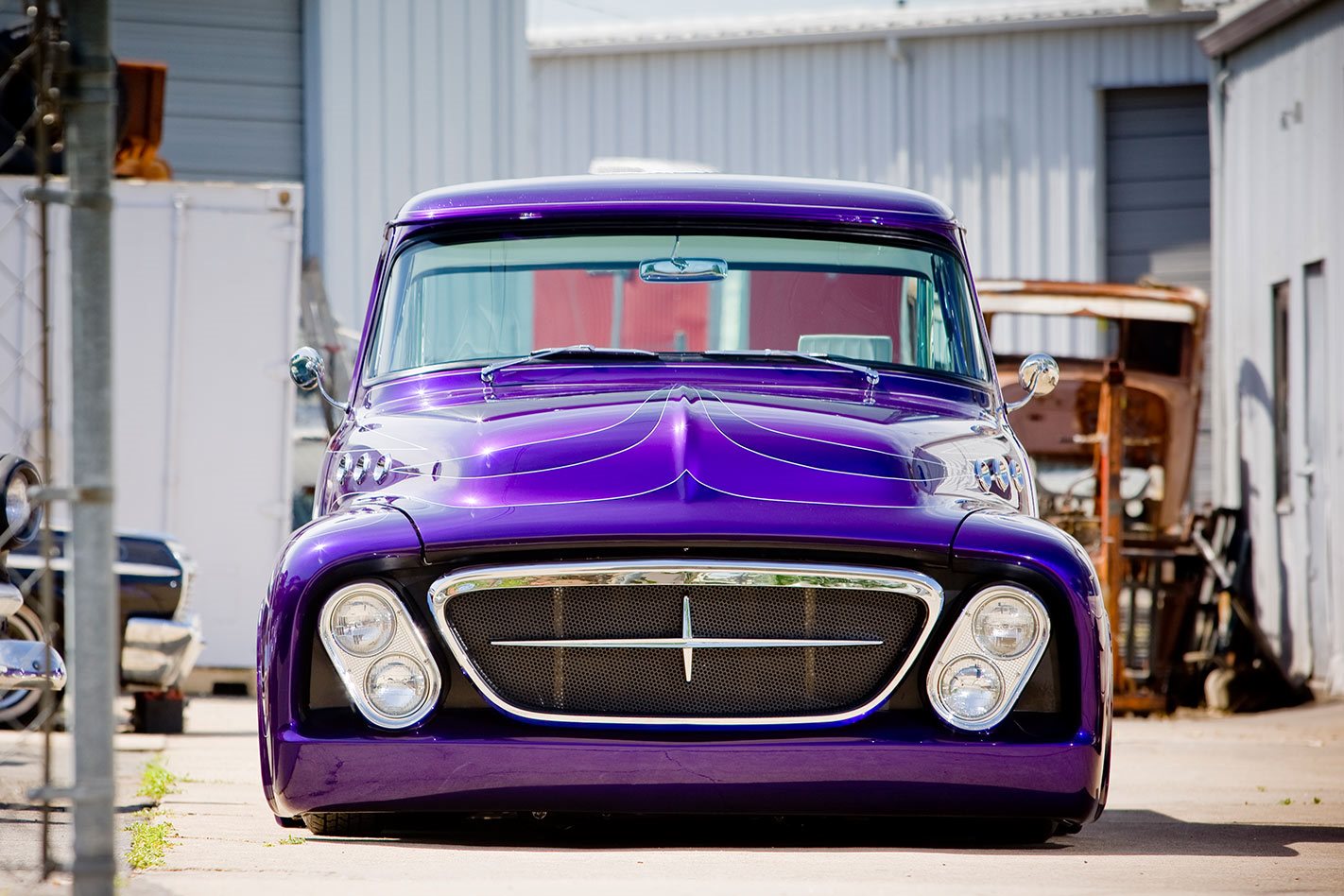 Things were moving quickly now and soon Hetfield had another project on the boil with BCC. This time he went for a five-window ’36 Ford which, after a tough five-week thrash, debuted at the Paso Robles Cruisin’ Nationals show, 2006.

As far as cars go this is certainly the one that put Hetfield on the map and got the world talking about him as a genuine hot rodder. It was also the springboard for what came next. 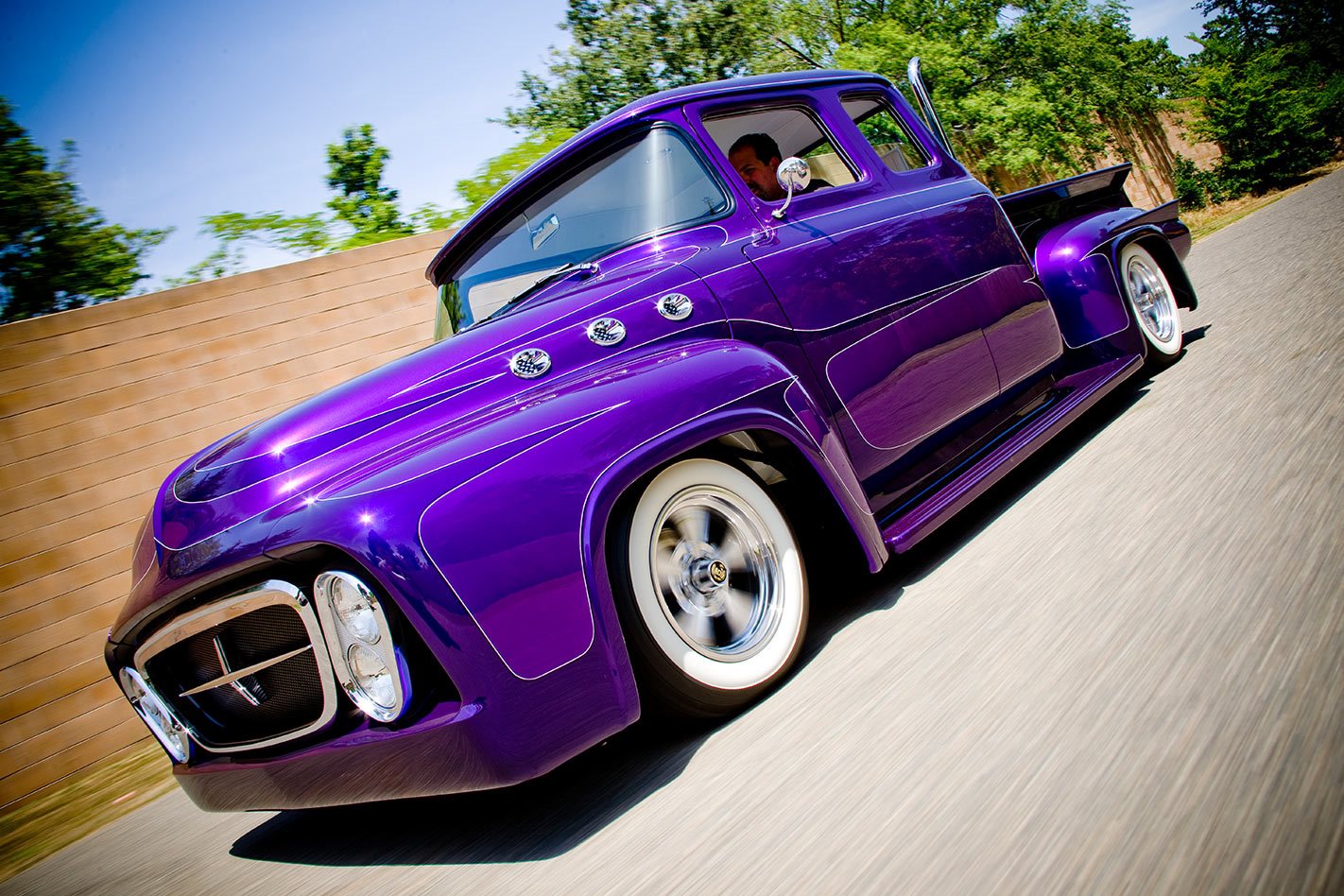 All ’round Air Ride suspension sits the truck where it needs to be, but when Hetfield wants to stretch its legs up goes the ride height and off he goes

“James really wanted a daily driver,” begins Scott as he eyes the truck with a combination of pride and apprehension. (The ’56 Ford is about to be delivered to its expectant owner and the last thing anyone needs right now is a scratch or a ding.) 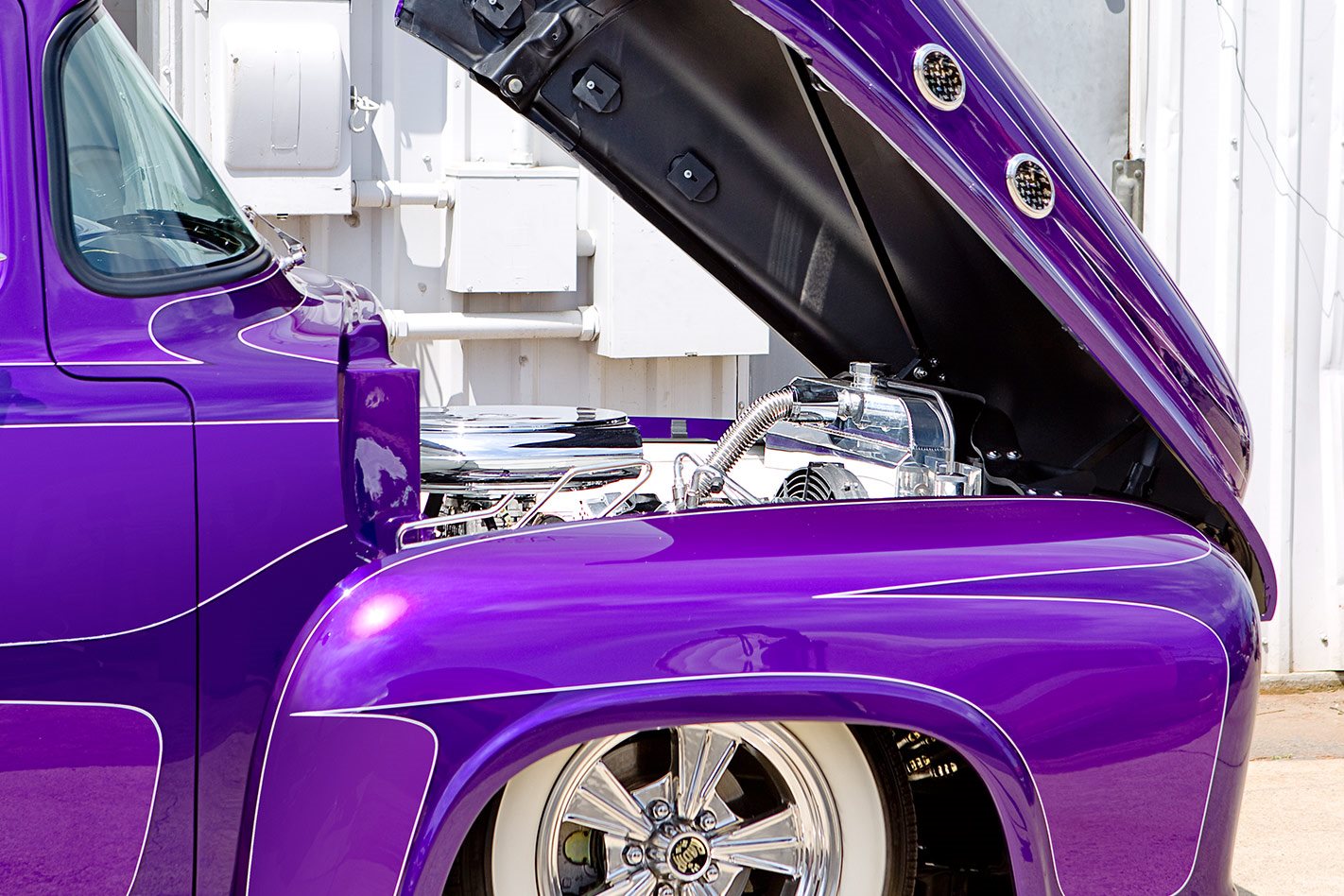 “He bought it off the internet from some old guy,” continues Scott. “It already had the extended cab and a flatbed on it. The funny thing is it was also painted purple, but a completely different purple to the one you see here today.”

As well as building a daily driver the original idea saw Scott and the BCC team installing a new front clip and chopping the top. After that the truck would be delivered to Hetfield’s workshop and Scott would help him finish off the project there: the Metallica man has an excellent garage and is more than handy around a toolbox... when he gets the time. 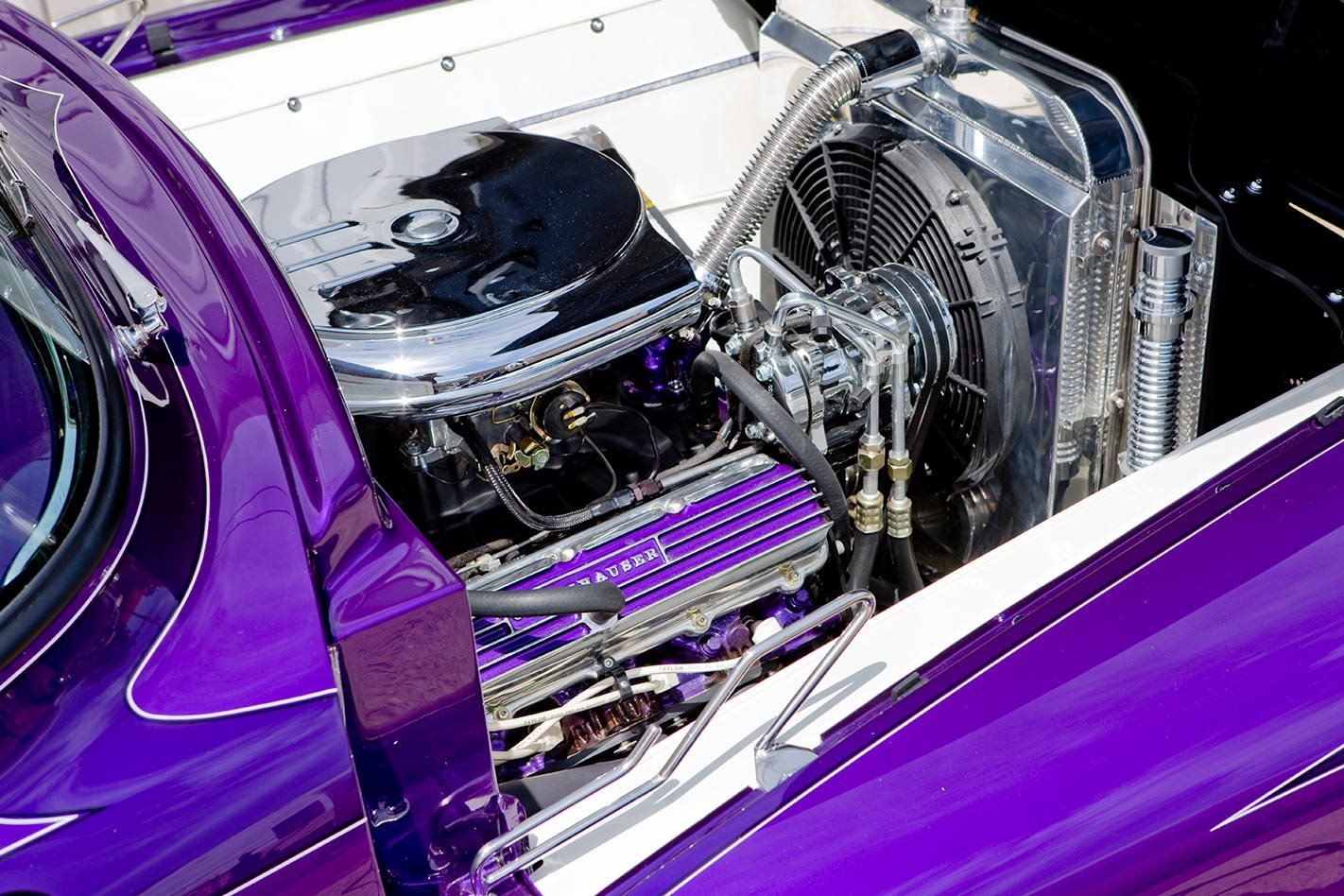 Unfortunately the best laid plans often take a hard right when it comes to taking on someone else’s hot rod project. Like peeling back the layers of a bad onion the further Scott and the boys got into the truck the worse it got. First, and most alarming, was the cab which on close inspection turned out to be a diamond shape, rather than square. Next up was the chassis that came complete with a chunky girder for extra strength! Naturally as BCC started to address these issues the truck just got nicer and nicer until it surpassed the daily driver mark and headed full-tilt for show car world. 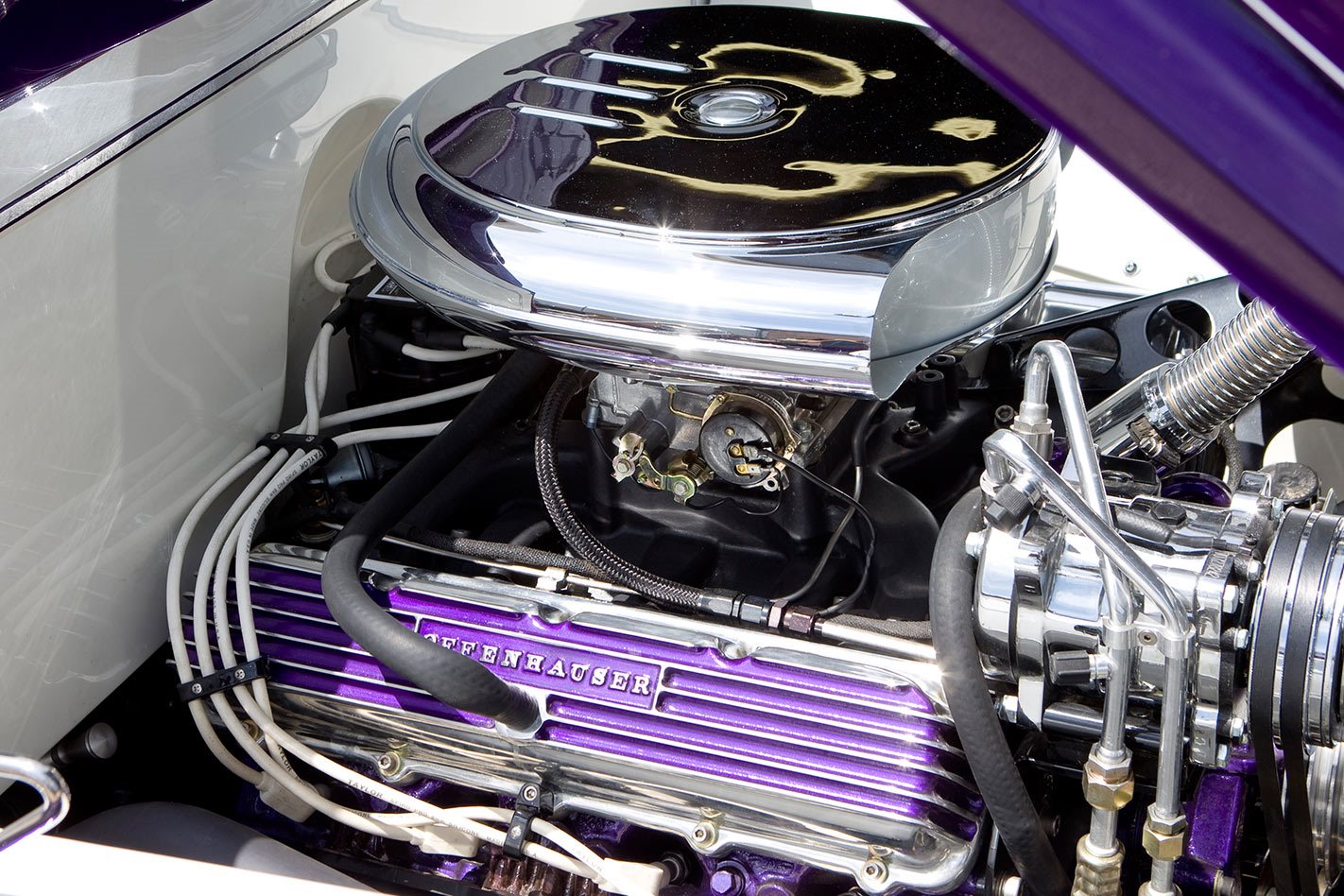 “What you have to understand about James and his truck is that he will actually drive this thing,” points out Scott, clearly happy that this will be another BCC success that sees more tarmac than it does show halls. “For him, his financial freedom means he just gets to enjoy it the way he always wanted, which is great. And we know he’ll get in the thing and go 90. He uses his stuff for sure and we went into the project knowing this.” 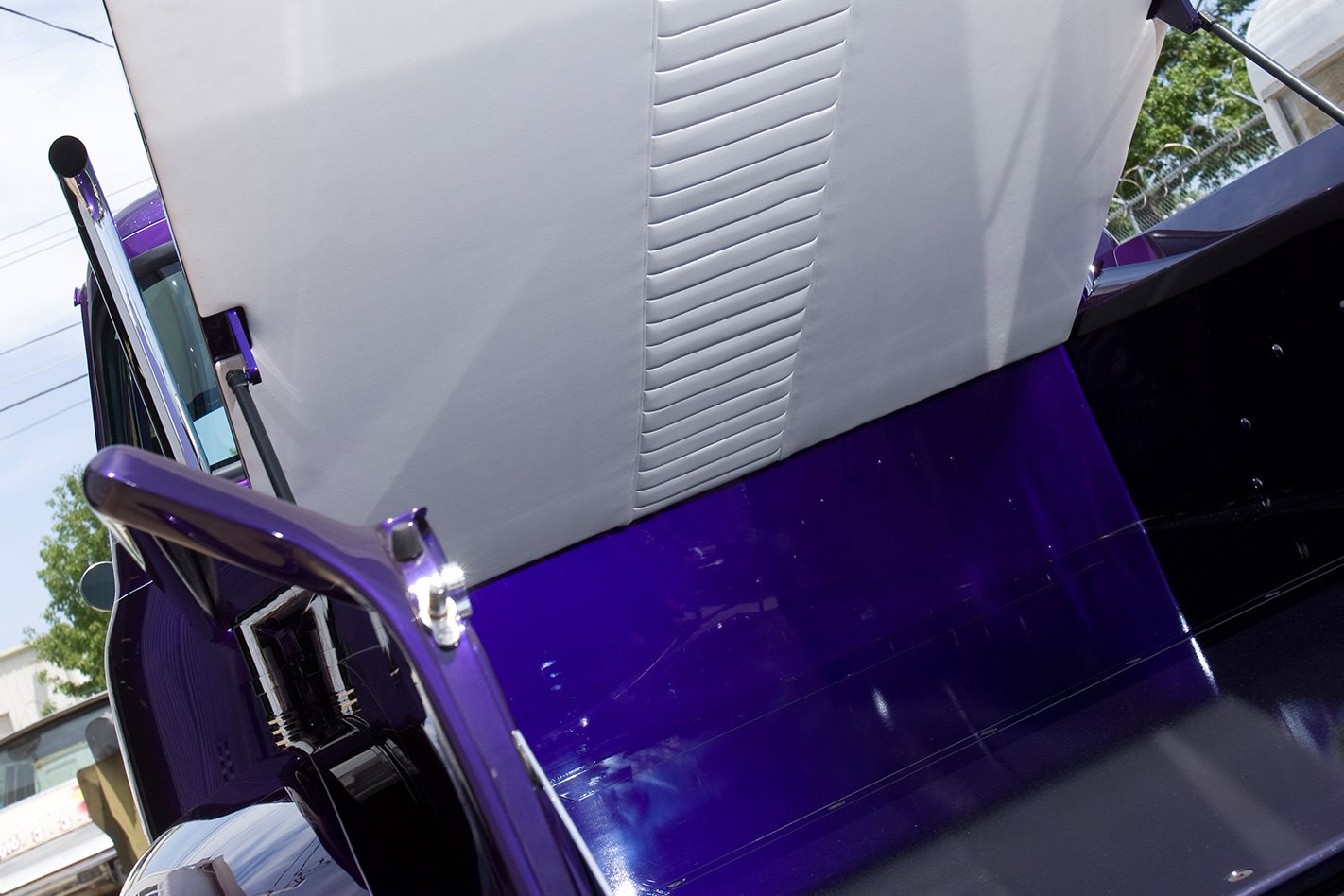 Despite its ramshackle beginnings the vision and execution of Hetfield’s truck is faultless. Think what The Jetsons might be driving if they ordered up a Kustom truck from Gene Winfield and you are in the ballpark. Now hold that thought. 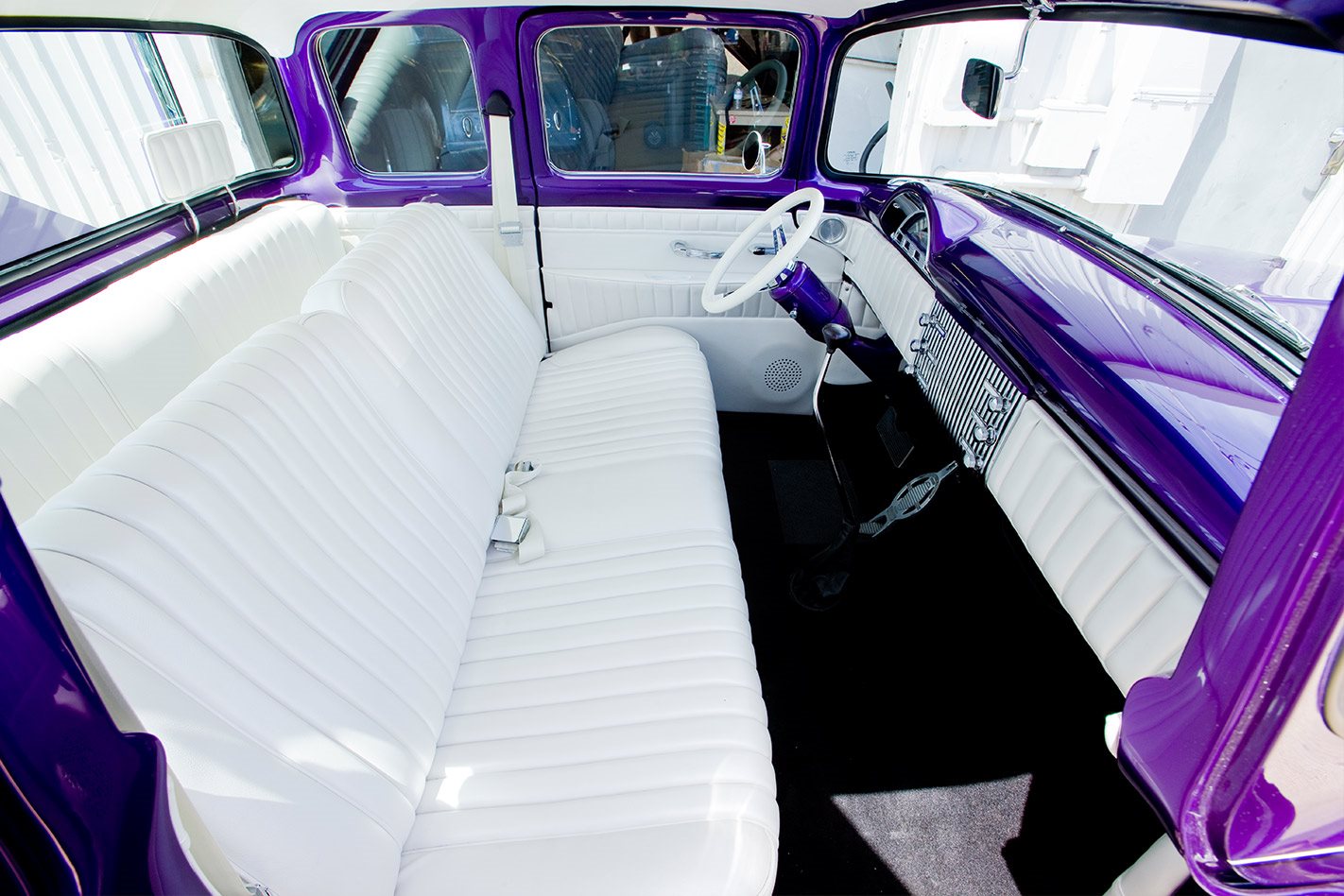 While this Ford is all about the look, it’s certainly built on very solid foundations. When it arrived at BCC it was running a 455ci Olds motor which worked well. Scott crossed it off the to-do list because of this. What then happened was as the rest of the truck got better and better, the Olds started looking shabbier and shabbier until at last Scott could take it no longer and sent it away to Rex Hutchinson Racing Engines for a freshen up. Backing up the 455 is a TH400 transmission that pushes the power back to a nine-inch rear end. Taking care of business at the front is a Mustang II clip while an Air Ride suspension set-up looks after the stance and the speed humps.

As far as the bodywork goes the cab features a beautifully executed 2.25in chop, five-window conversion and big rear window. Up top there is a ’58 Chevy Impala vent hiding a satellite antennae while the headlights are from a 1960/61 Ford pick-up canted sideways. 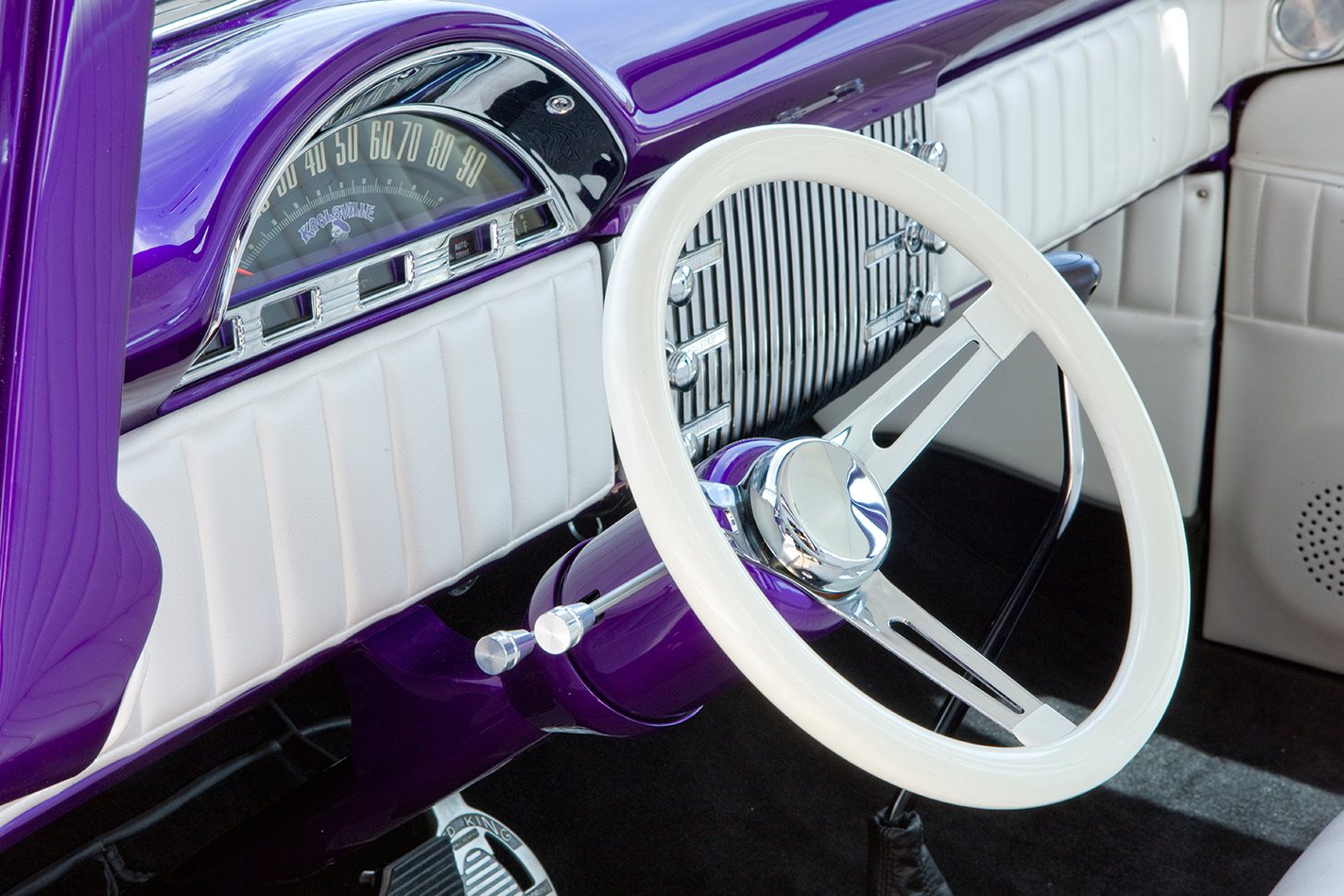 The grille is from a 1960/61 Chrysler complete with a Thunderbird bar. Other trickery includes a hood that rolls forward when you open it complete with ’53 Buick vents and Saturn emblems just to ram home that Jetsons feel. The inner fenders and firewall were all built from scratch.

“When it came time to build the bed the truck had got pretty crazy,” admits Scott with a rye smile. “Obviously we had to keep with the theme and I remembered seeing a truck in a magazine a long time ago with a bed that had a Nomad tailgate. 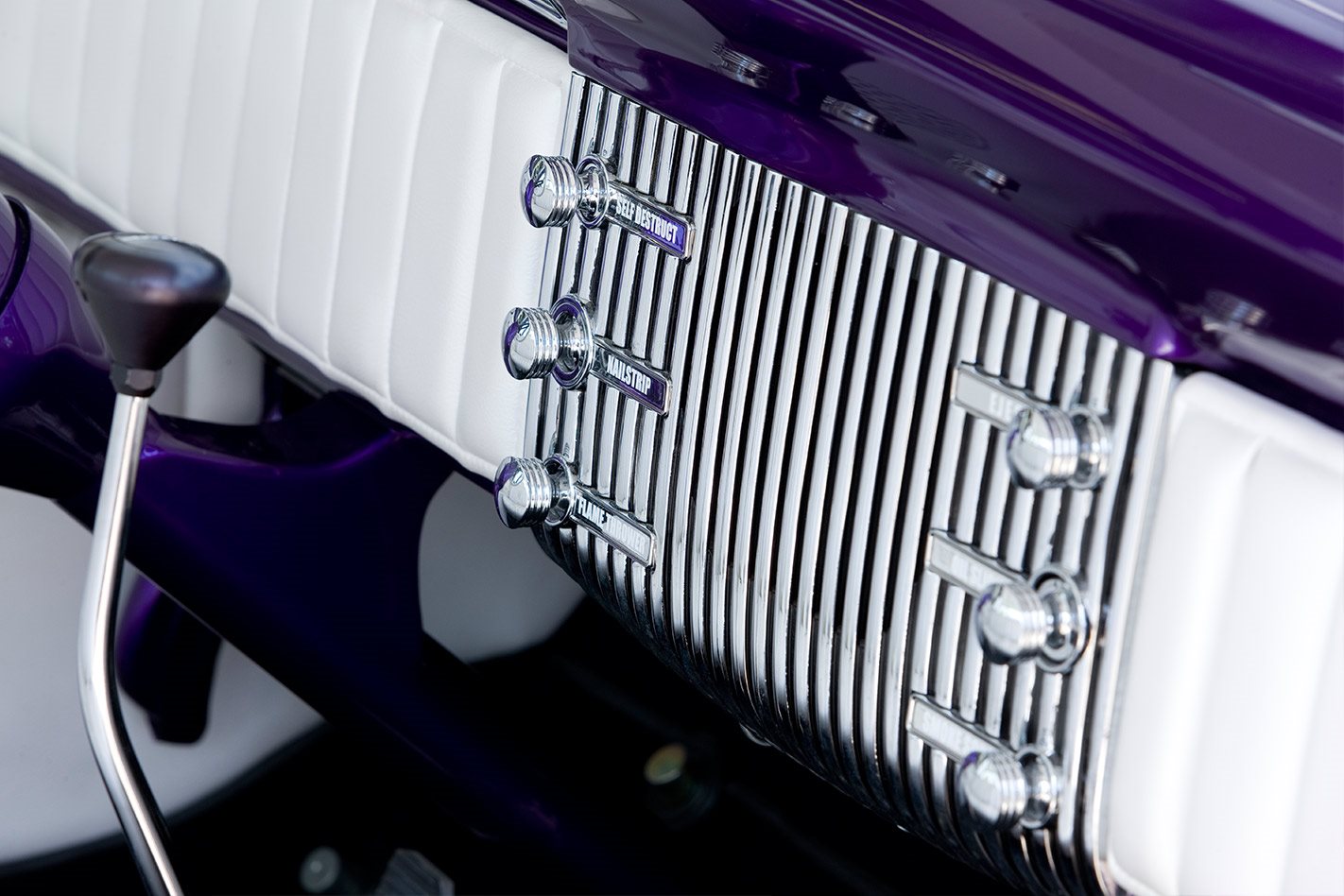 “That truck was a Chevy but I thought it would be kinda cool to do something similar with a Ford. At the time I had a ’57 Ranchero. I started looking at that and the width seemed to be really good and so the work went from there.

“The great thing about teaming up with James is that he is an artist and he understands how things evolve. When we told him about the bed he said, ‘Can you really do that?’ And we said sure and he just let us run with it.” 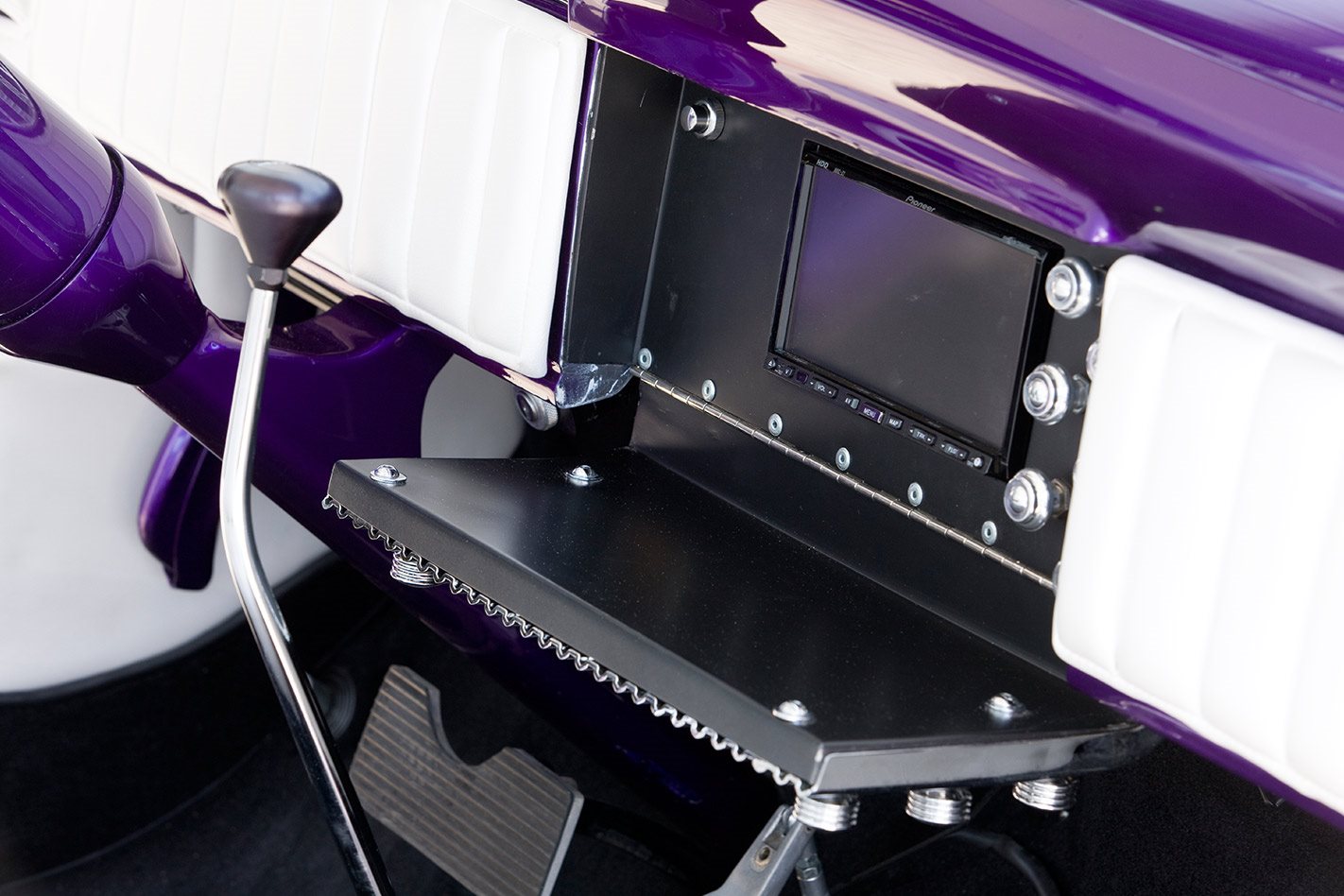 Aside from the super swoopy tailgate the bed features taillights that are a combination of ’57 Ranchero and ’56 Thunderbird. The bed floor is aluminium and lifts out to give access to the suspension, battery and compressors. The rolled pan is exquisitely crafted while the two-tone purple paintwork works brilliantly with the fins and curves. For extra pop, painter Jason Haskin went for a metalflake roof and black and white pinstripes. 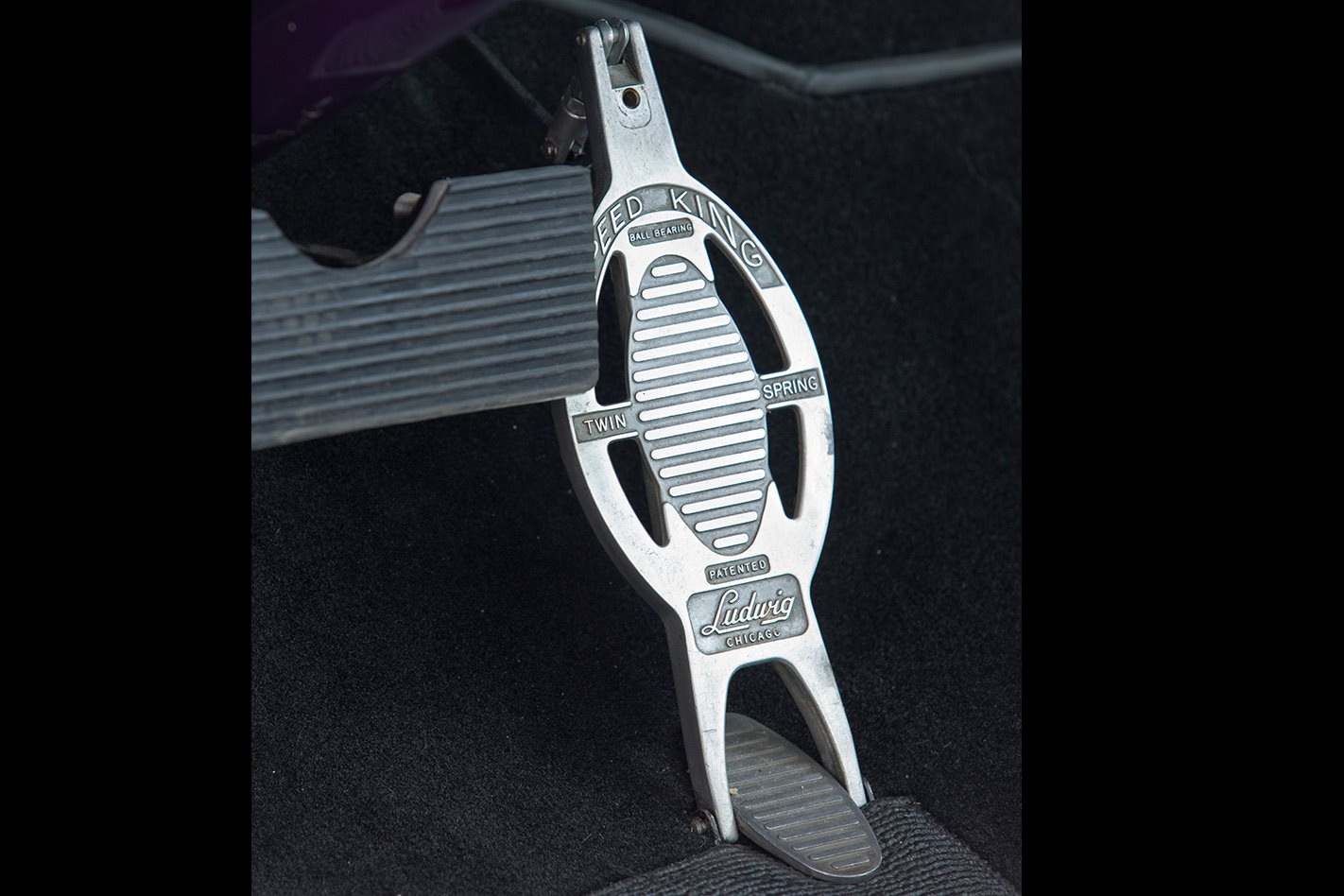 While all the metalwork was done without visuals, when the time came to fit the interior BCC decided to sketch it out... just to be sure. Whether or not they were being a little overly cautious is hard to say, but there is no doubting any part of this truck in terms of vision and execution. The inside of the cab is incredibly well finished and features a host of great details such as the manual side window winders that have been converted to operate the now electric windows.

After just a small amount of time spent with Scott and the BCC team it quickly becomes clear that, as a group, they are very proud of the ’56 Ford and no doubt they should be. But surely it wasn’t all plain sailing, surely working for a man such as Hetfield comes with its own set of challenges? 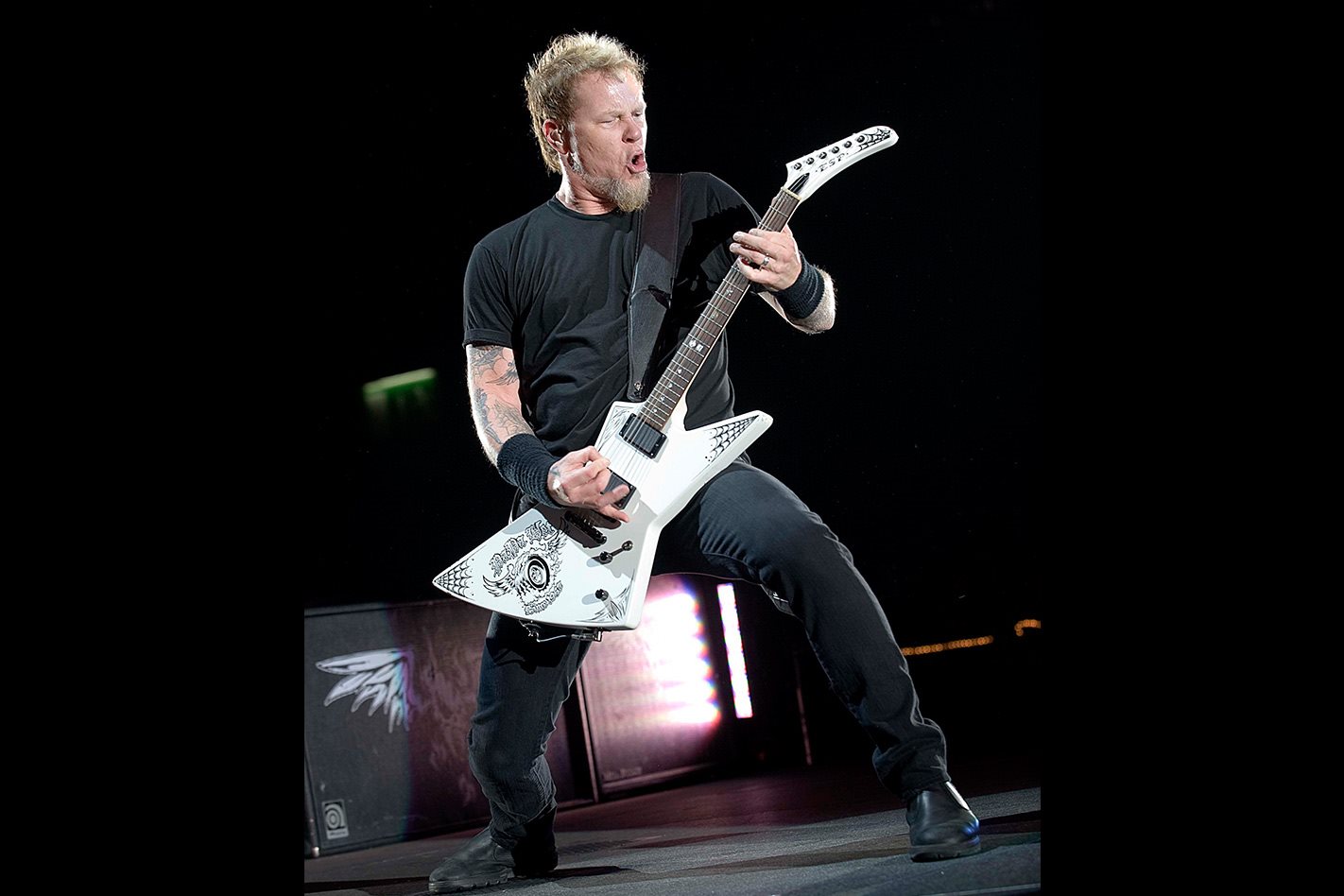 “Well, there is always pressure because we always try to put deadlines on cars, otherwise they never get done. But there was definitely no pressure coming from James. Never once has he called us and hounded us.”

With Hetfield’s next car already in the workshop and well underway it seems as though Blue Collar Customs, through their skill, integrity and ingenuity, have found themselves official hot rod builders to Metallica. Now all that remains is to get the other three guys measured up for their cars and all will be well with the world. 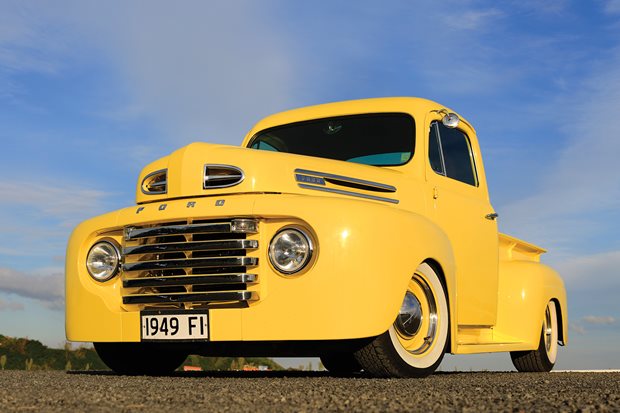 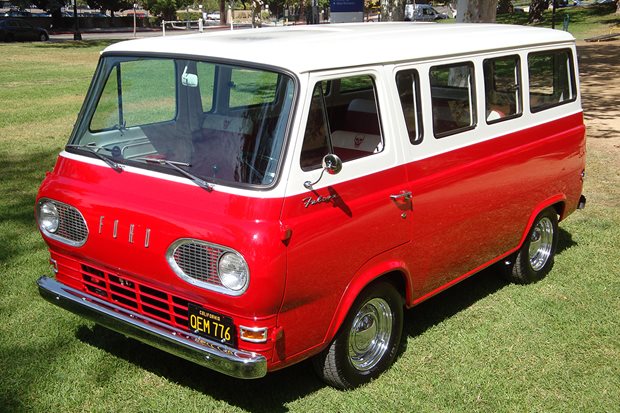 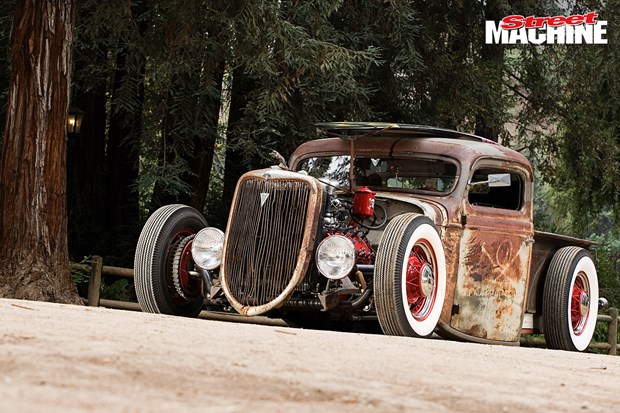