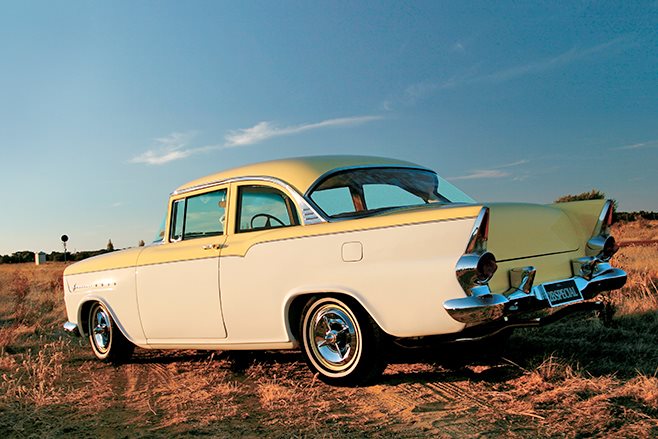 Starting off with a pretty much rust-free stocker, Greg drove the old girl around Perth, resplendent in its two-tone grey livery. That was fine for the first 12 months, until he got tired of being left behind by all his mates’ more powerful rides when they were out on cruise days. Then the spindly king-pin front gave up the ghost and Greg decided to give the FB a thorough update. 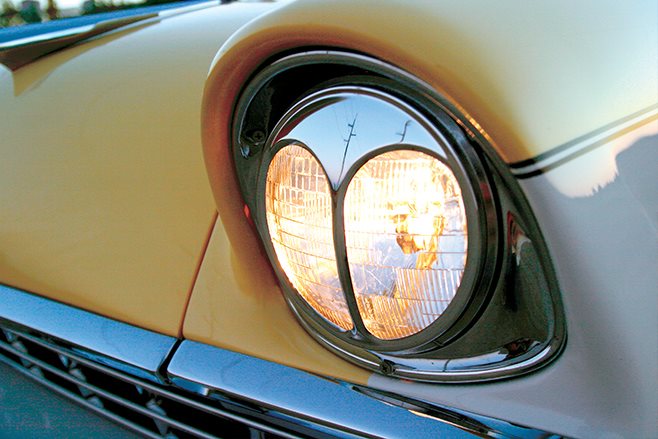 Since Greg works as an electrician in remote mining areas and only gets back to town one week in seven, his best bet was to send the car off to the capable crew at R&M Restorations. Proprietors Ray Towel and Charlie Blogna are well known around WA for their extremely high standards of workmanship and evident throughout this custom FB.

Ray and Charlie got to work and brought the FB’s underpinnings up to scratch with a ¾ chassis, an unusual Jaguar XJ6 front end and a Ford nine-inch out the back. That’s some pretty heavy-duty hardware, but registering a V8 in an early Holden can still be a little difficult in WA, so Greg opted for a 262 Chevy V6. 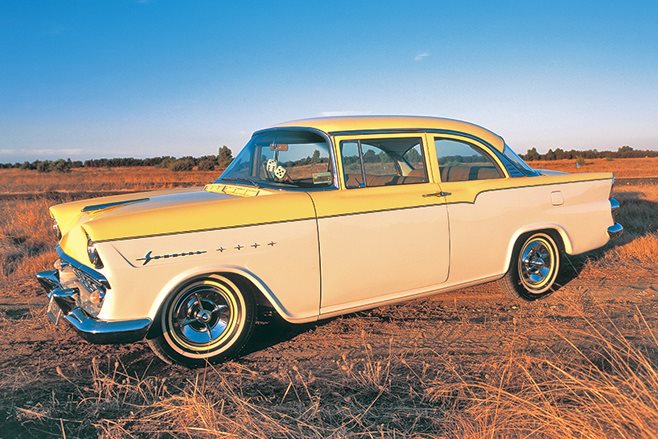 With the mechanicals sorted, Greg had to finalise a theme for the rest of the build. Having spent some time among them, the local rockabilly crowd had a real influence on Greg’s thinking and he decided to go for a subtle mild-custom look.

“People like it because it’s not so in-ya-face, and so they appreciate the subtlety of the modifications,” is Greg’s opinion. 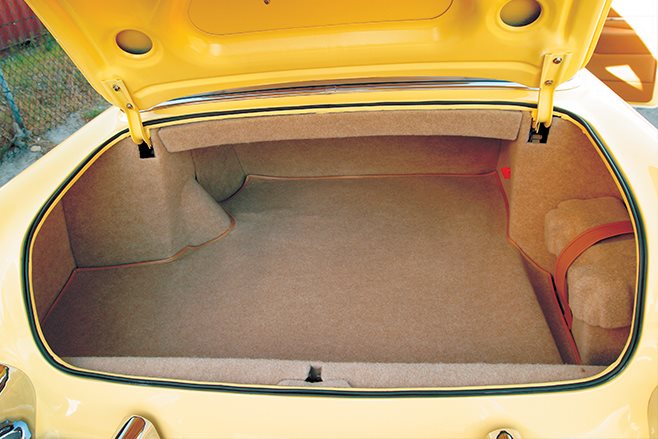 Bodywise, Greg, Ray and Charlie decided that an unchopped two-door would be the business. Another pair of good front doors were found so that the originals could be extended six inches. The boys at R&M got to work welding up the back doors too – and yep, those rear windows do go up and down. The removal of the rear quarter window also adds to the clean appearance, but the fronts were left in place for ‘air-conditioning’ duties. 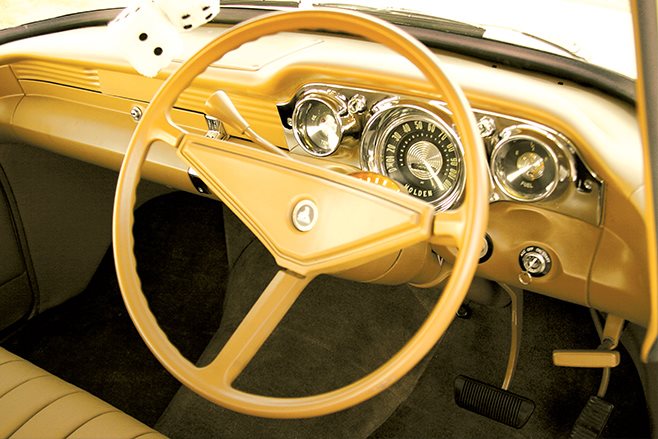 The rest of the body was also tidied up with the removal of all badges as well as the door and boot locks, but don’t worry – Greg can still lock his car with a keyless remote, so don’t go getting any ideas. A Falcon station wagon fuel tank was fitted to the boot floor and the filler neck was relocated to the rear left-hand fender. This really tidies up the rear of the car, not just in looks but by avoiding those horrible fuel stains that you see on the back of most FBs. The other advantage with the Ford tank is that it has a recess for the spare tyre. 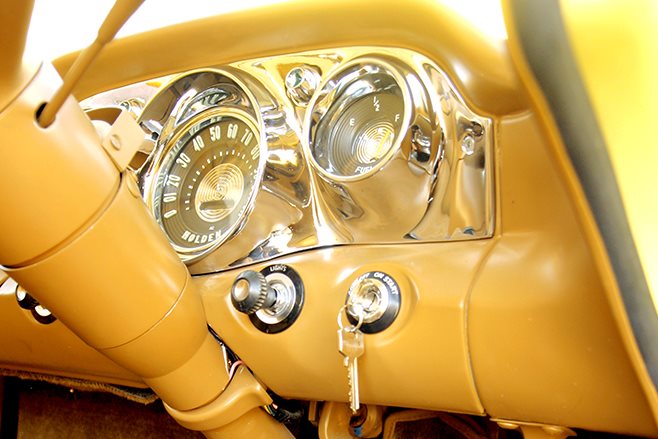 The hardest decision for Greg to make was the colour. He had always wanted a yellow car and was contemplating doing a standard two-tone with a yellow body and white roof, but after some discussion with his painter, they came up with the scheme that you see on these pages. Once again a subtle change, but one that adds a lot of impact to the car. The colour for the main body is Snow Crest White and there is a very fine black pinstripe separating the two colours. Could this be the new custard slice? 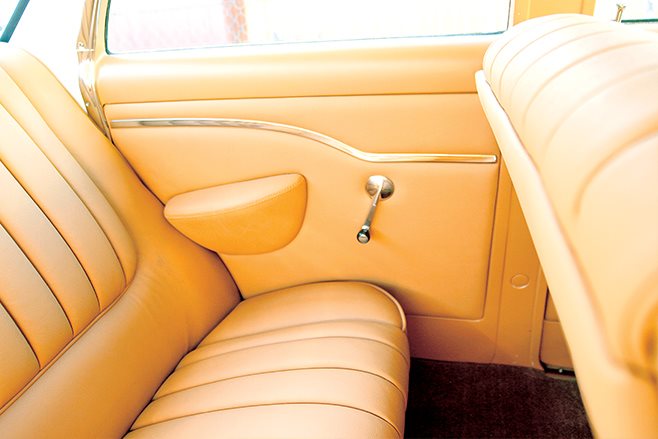 Greg was also subtle when it came to the interior – there are a lot of changes that really aren’t obvious. The front bench has been made up from two original seats and modified to tilt forward to allow access to the rear. The rear bench has also been modified so that it covers the unsightly wheel arches that the Holden designers thought you wouldn’t mind looking at. After the door-lengthening, the standard door trims weren’t any good so a new set was made up. These were given some extra sparkle with the addition of some ’57 Chevy interior trim that fitted like it was always there. All of this fine work was then covered in Palomino leather and the hard surfaces were given a satin finish to match. Adding to the mildly-updated but still factory-looking interior is an LC Torana steering wheel and column, and to allow for a bit of cuddling and canoodling the column shift was left intact. 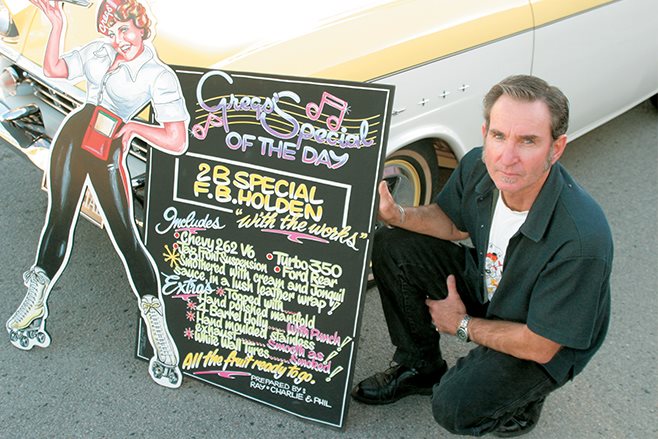 Greg Wilton lets the metal do the talking, but offers a menu to answer the more obvious questions

To complete the mild custom theme, Greg chose a set of 14-inch wheels dressed up with spinner hubcaps and whitewall tyres, although he also has a set of 17-inch Billet Specialties SLX95s to go on it for a change of pace.

So far the FB has only been entered in one show – the 2003 Perth Hot Rod Show – and walked away with 2nd Radical Custom, Top Standard Paint and Top Engine Bay as well as an invite to the Meguiar’s Showcar Superstars final in Sydney. For the meantime though, Greg is pretty keen to just enjoy driving the car. 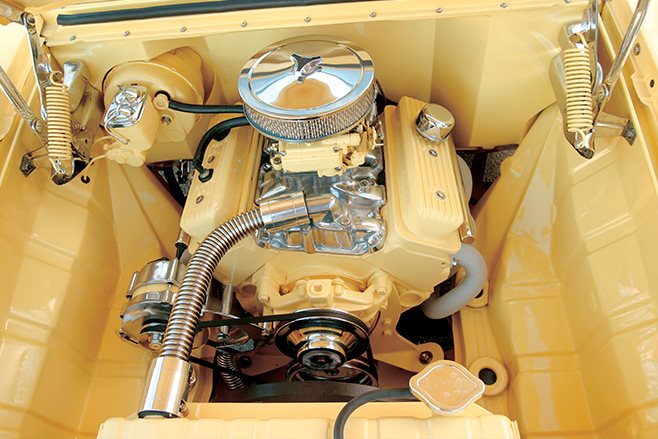 You may have to look twice at the pics because at first glance you could think the donk is a small-block Chev. The difference is, the boffins down at the Chevrolet factory lopped off the front two cylinders and did a cut-and-shut on the rest of the bits. Of course, since this is basically three-quarters of a 350 Chev (do the maths) a trusty Turbo 350 bolts right up to the back of it. The little V6 fits quite nicely in the detailed engine bay – bathed in body-colour paint and snuggled up to the smoothed firewall, it looks like it was always there.

Apart from the 290 Holley and the tubular headers, you would think it was a factory installation, although I doubt the factory would spend the time bending up and polishing a twin two-inch stainless exhaust. Quite a few hours were spent filling the stainless tube with sand, then heating and bending until two mirror-image pipes were done to perfection. Mounted up against the detailed floorpan, which is coated in the same Jonquil Yellow that covers the upper half of the car, they look a treat and blurt out a raspy tone that lets everyone know that there’s something different under the bonnet. 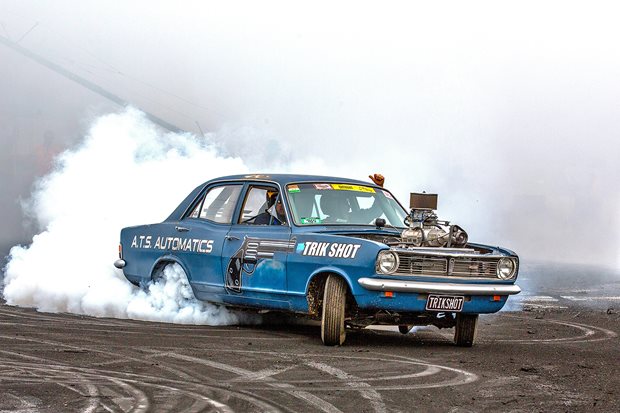 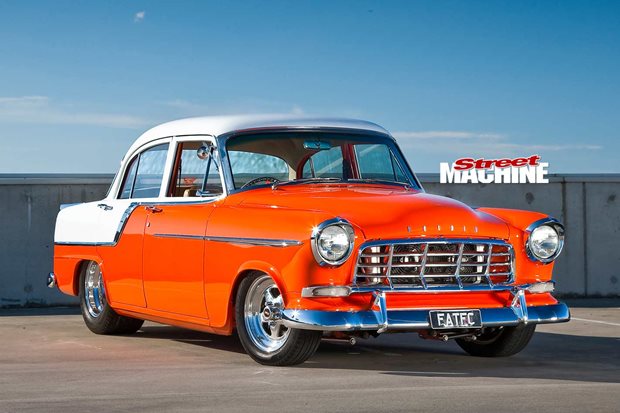 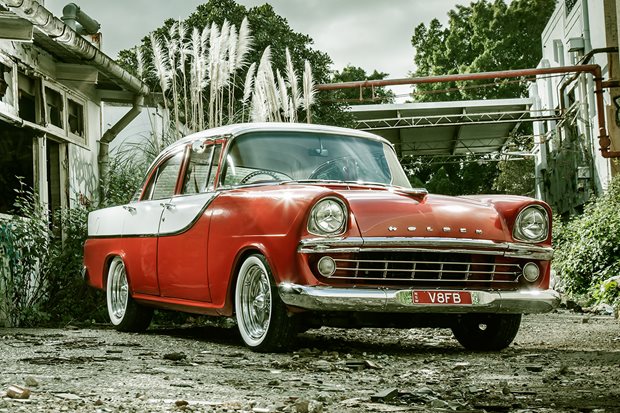 We all love a sweet Holden FB on whitewalls. So how about Jason Fuller's stunner, that's packing an injected V8?