Peter Clifford set out to build the car he always wanted as a kid. Here's a look back at the early stages of bringing his dream car to life

GEN Xers are a nostalgic bunch. They are ardent devotees of the trappings of their youth — 1970s and 80s toys, TV shows, movies, music and BMX bikes are worshipped, and childhood memorabilia is collected regardless of adult age and alleged maturity. 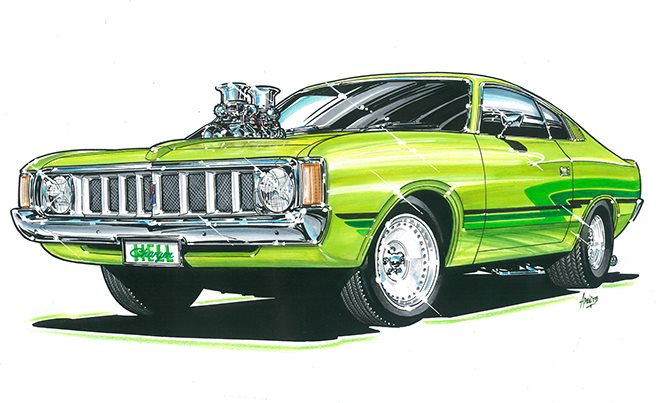 It could be that Gen Xers experienced the best of both worlds at pivotal times in their lives — living as kids through carefree, low-tech days when things were safe and simple, then growing up as the world discovered computers and technology at a cracking pace.

Forty-year-old Peter Clifford from the Gold Coast is a proud case in point. “Eighties street machines, custom panel vans and Gen-X music are my passions,” he said, “so the 80s theme for my VK Charger is set in stone — that won’t be changing. I want to make this car look like the hotties I loved as a kid.” 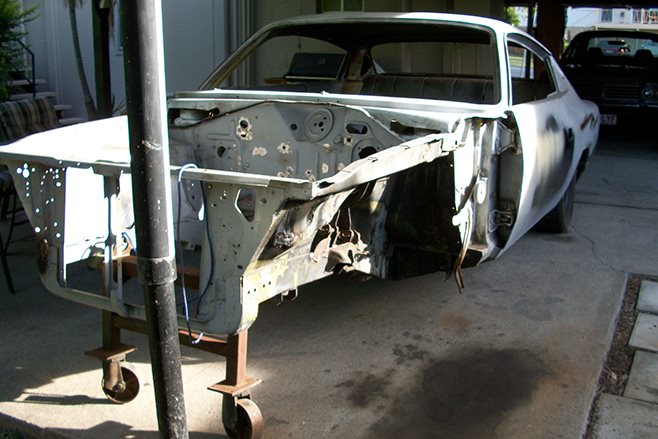 Before the rebuild, Pete's VK was a nice 340-powered unit, with just a little rust starting to poke out

There’s been a strong trend for 50s and 60s-style cars in recent times, so it makes sense that the 70s and 80s are getting a look in now. The build sheet for Peter’s Charger will make any Gen X car nut froth at the mouth — ginormous rear and cheese-cutter front Center Line rims, carburetted 6/71, velocity stacks, tramp rods, wheelie bars and no doubt a lace garter ready to hang from the rear view mirror. 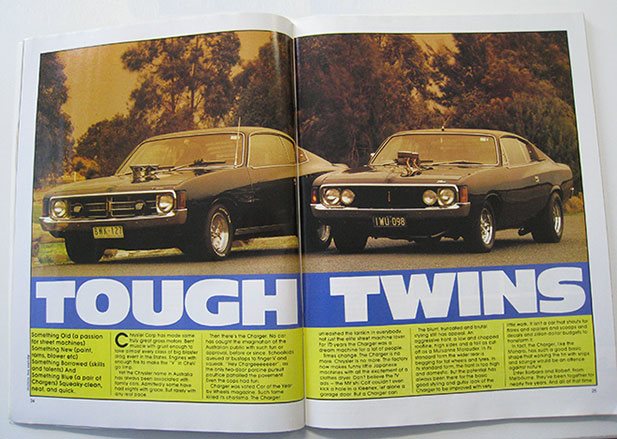 The Blueprint I and II Chargers of Robert Johnstone and Barbara Nicholaisen (SM, Dec '85) were a big influence on Peter's VK

An avid Street Machine reader from day dot, Peter’s been heavily influenced by these pages: “Rick Van Meerveld’s VJ from the early 80s and the ‘Blueprint’ twin VJ and VK Chargers a few years later — that’s the look I’m striving for.” 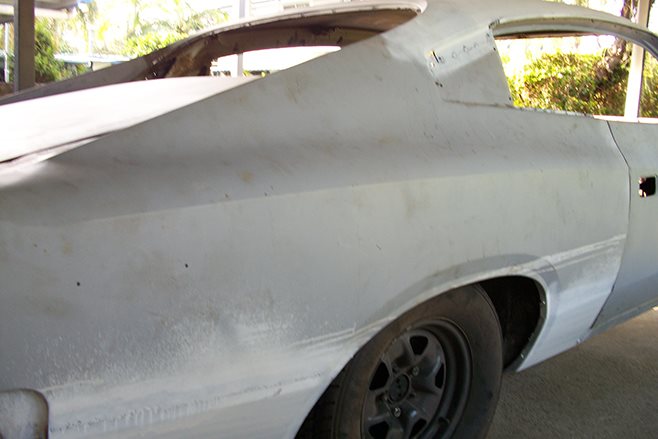 “The Charger is such a sexy shape that to alter them too much is unnecessary,” Aden explained. “Some 80s builders used accessories and graphics to give essentially stock-bodied cars maximum visual impact so that’s exactly what I’ve done here.

“The VK’s fibreglass C pillar moulds have been replaced by fluted VH units and all the body strips and chrome have been shaved. The main demand from Peter was that the car retain its factory Pampas Green paint, so we’ve worked the graphic shades to not only complement that unusual colour, but to also flow with the body pressings and tail-lamp recess.” 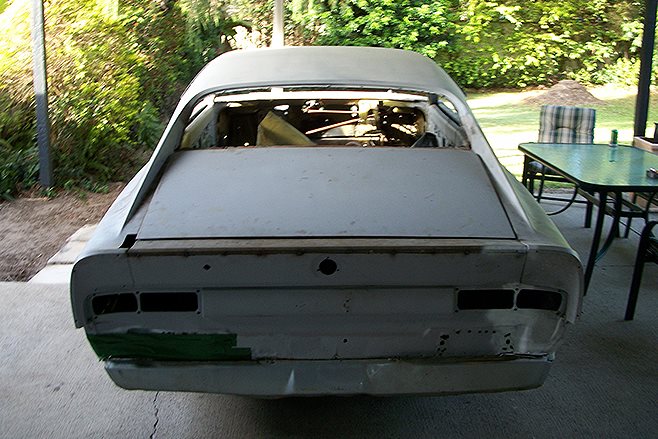 Fresh chrome and the sharky VK Charger grille will be retained, with the green hue offset by satinfinish Center Line Autodrags and wheelie bars.

A polished and detailed 6/71 blower and cool M/T valve covers with wingnuts are set to camouflage some modern bottom end concessions. The 360 Chrysler small-block will be stroked to 408 cubes and fitted with a deep Milodon sump and oldschool F248 Crane cam, while the alloy heads will be roughened and painted to hide their pedigree.

A 727 Torqueflite with 3800 stall converter is ready to go, along with a shortened nine-inch running 4.11 gears. The factory interior will receive a thorough pornification in original Boca Raton cloth and retain its factory sports wheel and tacho dash, although Peter is on the hunt for a set of threespeed Hurst Lightning Rods.

“The graphics were the biggest surprise for me,” Peter said. “I was adamantly against them but now that I’ve seen Aden’s concept I’m keen to give them a go — in vinyl initially in case I change my mind. “I have a Pro Stock letterbox scoop and a set of polished 15in jellybean rims that I can bolt on for a more streetable look, so at least I can run it with an 80s theme either way.”

With the Charger shell currently receiving final rust repairs, the build should soon be over the hump that makes a project feel like it’s going nowhere. “I can’t wait until it’s painted and I can start the reassembly. Aden’s concept is exactly what I was hoping for and it will keep me inspired to get it built sooner rather than later.”

A period Valiant panel van build is slated as Peter’s next project, which will make for a great duo at any car show. We just hope the Voxson wireless and graphic equaliser can still crank Def Leppard to 11! 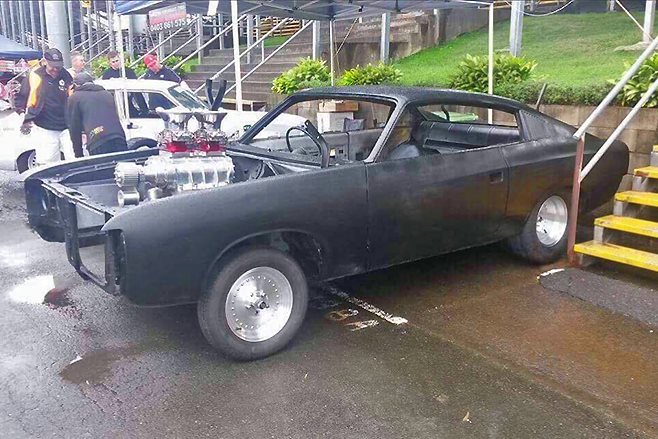 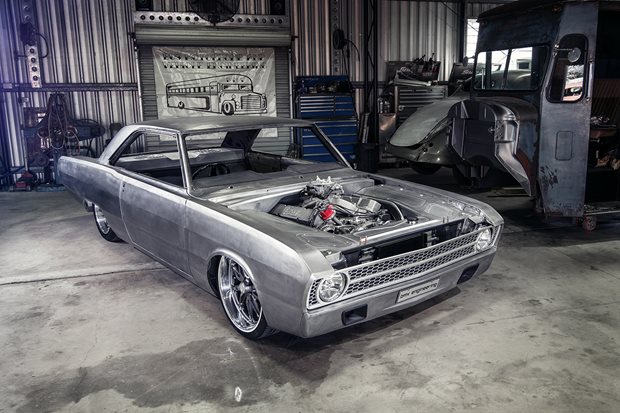 An Aussie first, this elite VG Valiant build blends show, go and flow and draws on a motorbike for inspiration 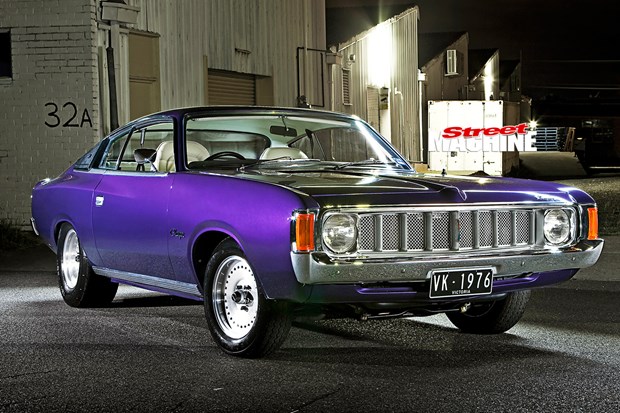