CUSTOM car legend Rod Johnston from Wongarbon in NSW passed away on the 27th of February, aged 79. Rod and his son Hud have built a fleet of cars over the years that were low on budget, but high on creativity. We’ll have a tribute to Rod online soon, but in the meantime, check out the FJ Holden that we featured in the May 2011 issue of Street Machine.

17
From the custom grille on the nose to the sweet exhaust outlets in the sills, the FJ coupe is packed with custom details

HUD Johnston and his dad, Rod, had just polished off Christmas lunch in 2005. There’s not much to do in Wongarbon, NSW, except build cool cars and talk soon turned to ‘what if’ projects.

“We had an FJ Holden shell and some doors left over from a project — believe me, it wasn’t much,” Hud says. 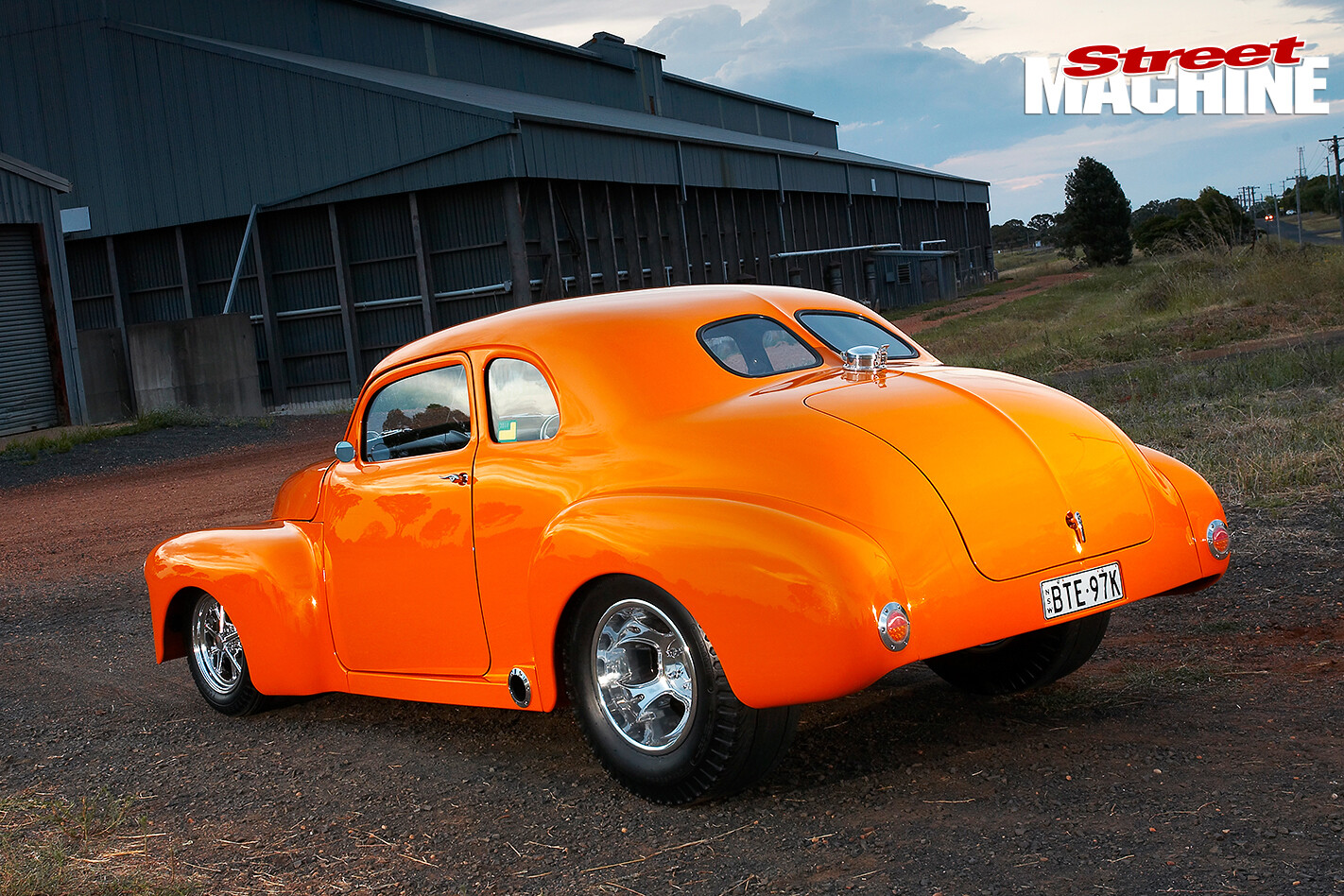 So the remnants were dragged into the shed that arvo and the chin-rubbing began.

“We had a few parts waiting for the right project — a Hurst shifter and the Toyota Hemi in our ’40 Ford parts chaser that we always said could be in something better.” Using styling cues from early Anglia, Willys and Chev gassers as well as dry lakes rods as a starting point, the Humpy was soon sporting a short back ’n’ sides. “We roughed it out pretty quickly but didn’t get stuck back in until the following Christmas,” Hud says. “Coming up with something different with an FJ isn’t easy.” Although the list of handcrafted parts seems endless, everything has a function and nothing’s directly from a catalogue. “Why have parts everyone else has? Besides, it helps keep the costs down if we can make at least half of every part.” 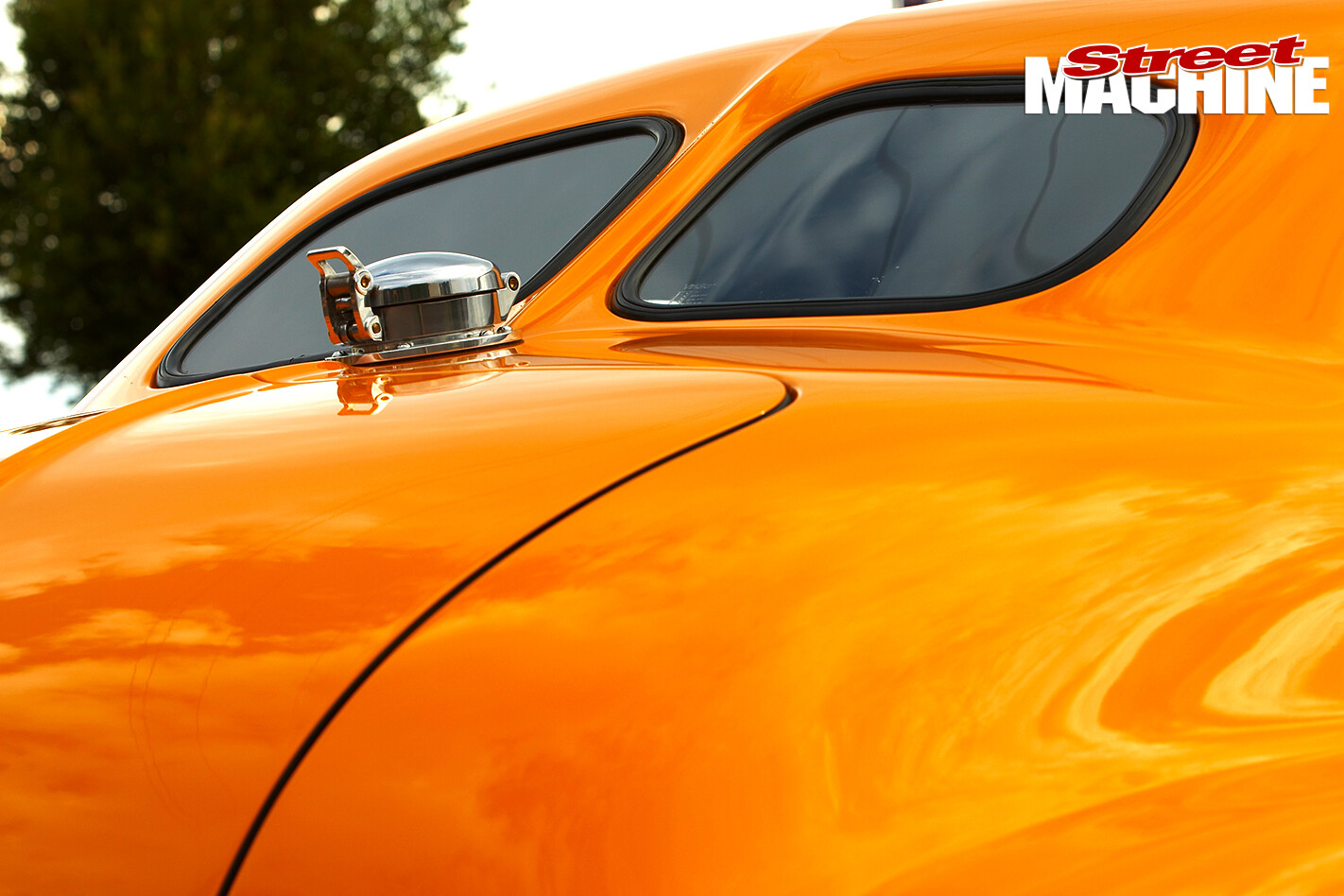 And their work is done with rudimentary tools. “Yeah, here it’s a hacksaw, drill press and file — that’s our CNC machine! What we couldn’t do we gave to Tony Heaton Machining & Metal Polishing. Dave Little took care of alloy welding.”

For the two-inch chop, the rear of the roof was moved forward six inches after removing a matching slice across the roof behind the B pillar. Doing that necessitated a custom tulip panel between the boot lid and rear window. A swage line to complement the hood was beaten into this new panel, flowing into a fabricated rear window divider and tapering away into the roof. The rear window was reworked to accept flat glass and the boot skin was unpicked and given the same swage.

17
Hud referred to the roof cut as a 'gentleman's chop'

The front doors were lengthened eight inches, with the B pillars moved and canted forward above the beltline, and the rear door shells were shortened and welded up. Then everything was smoothed. Fixed glass replaces the wind-up rear windows and the front quarter vents were deleted. Getting one-piece glass to clear the hinges in early Holden doors is tricky — a filler panel where the quarter window once lived provides a channel and somewhere to mount handmade mirrors. 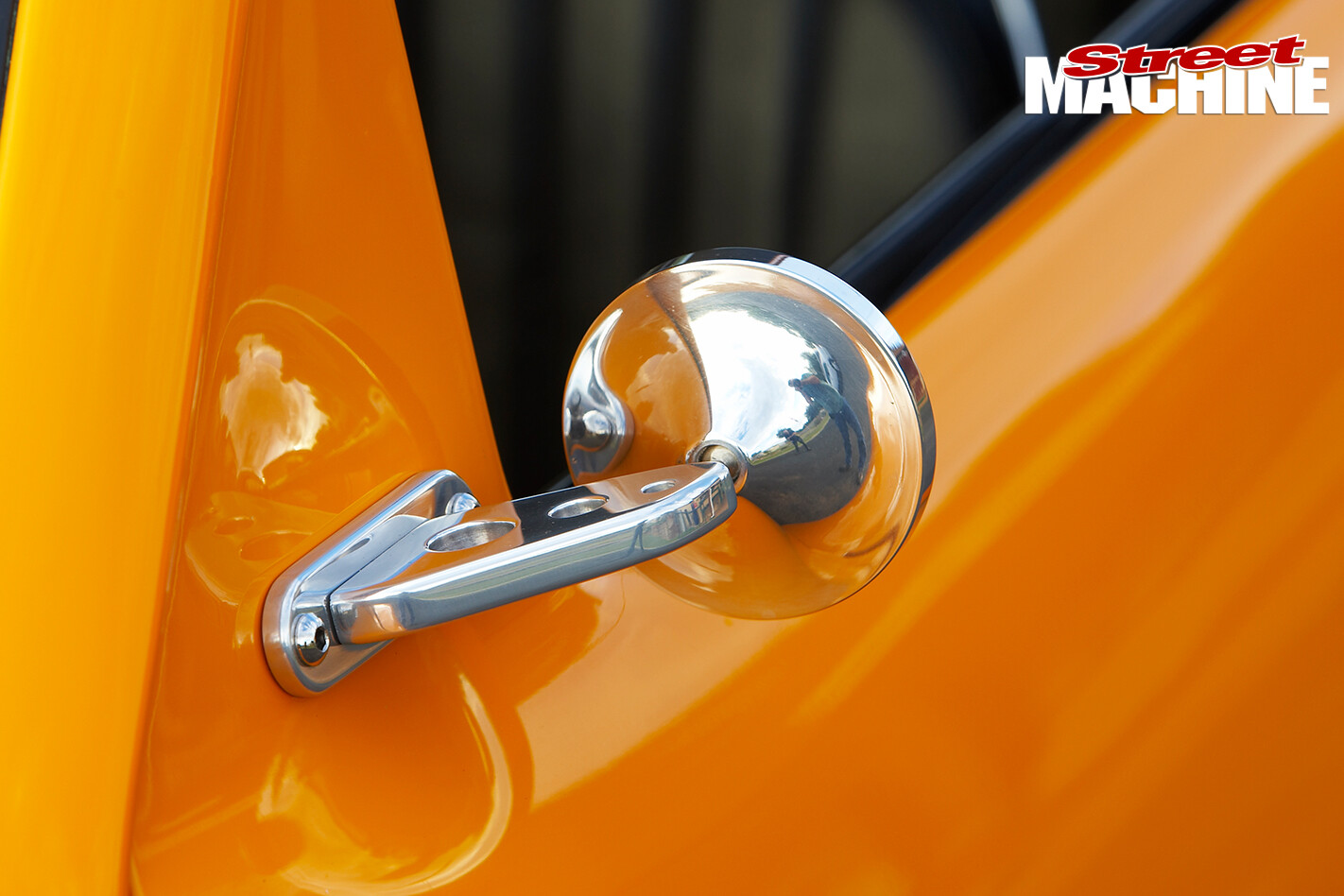 A Johnston-fabricated spun alloy Moon-style fuel tank lives in the boot. It’s fed premium 98 via a fuel filler above the boot lid with “the biggest, ugliest cap I could find — from a Cobra. I like to make a feature of the parts that normally get shaved off. That screams hot rod to me,” Hud says. New sills were made from 3x2 RHS tube wrapped in sheet steel, and feature exhaust ports in front of rear guards widened three inches; the front guards got a 2½in pump. The wheel arch lips were reinforced and smoothed with 13mm steel tube and radiused to suit the tyres. “I moved the front arches to put the tyre forward and inwards, to give the altered look. It helps with turning too.” Also up front, the three-inch rubber rake pointed the headlights downwards, so they were cut and tilted back. The aluminium grille was inspired by an Anglia gasser. “Designing and making our own parts such as the grille and light bezels saves the stress of tracking down and restoring original bits. That’s the fun of customising.”

17
While the Toyota Hemi is a lot smaller than the Mopar version, the FJ firewall still had to be reshaped to suit

How about the Hurst-shifted Hemi? “We looked at hot grey or red sixes but this car needed something different. The Toyota Hemi V8 in our pick-up was being wasted.” At 110kg and less than five litres, that keeps engineers happy. The pick-up also gave its Supra five-speed ’box and Currie nine-inch to the cause.

The rebuilt Hemi was topped off with a trio of Barry Grant Demon 98 carbs — “More pressure and more reliable than traditional 97s” — and the stock inlet manifold was modified to accept a custom tri-carb adaptor.

“The money saved from the engine swap we put into the Rodtech suspension, which saved us from building steering set-ups and sump mods from scratch.”

While it was engineer-friendly, shoehorning a Hemi into the tiny FJ engine bay was a nightmare. “We had to retain a certain amount of FJ to keep away from the Individually Constructed Vehicle rule book.” 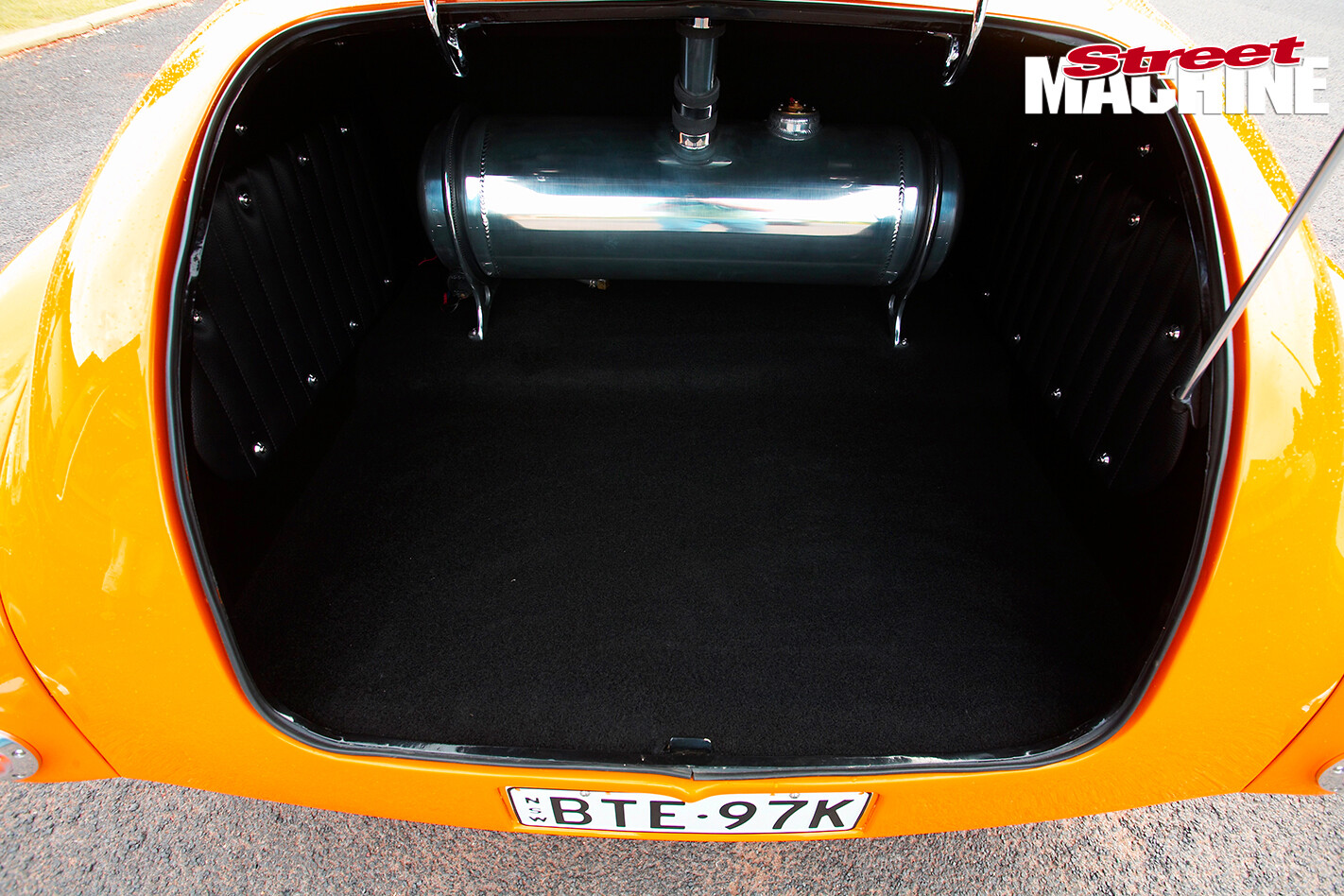 A tube chassis was integrated into the floor — except this FJ has two floors. The top floor has removable panels to access bits such as the exhaust; the bottom floor is seamless and machined caps cover every thread.

Inside, while items like the Hurst shifter and Kirky vintage sports car buckets are the real McCoy, everything is Johnston-modified. A $50 sprint car wheel wears drilled aluminium inlays in the spokes, the dashboard lost its hump and gained Stewart Warner gauges in custom bezels against a background alloy plate. A collapsible aftermarket steering column hangs on a custom aluminium column drop. The rear squabs and door panels were made by the Johnstons then trimmed in diamond tuft black vinyl by John Morphett. Filling the engine bay with the Hemi meant some hardware moved indoors, such as the master cylinders for the fabricated pedal system. A Harley tool bag replaces the FJ glovebox; that space now houses the battery.

The car was registered on Christmas Eve 2010 and won Top Wild/Mild Custom at Summernats 24. “We plan to drive it a lot more once the show thing is over,” Hud says, “but we’re surprised at how well it’s done. We don’t build to impress judges, we just try to improve on our last car.”