KHAIN Mackey’s 275 radial-equipped HR Holden is one of the pioneer cars of radial racing. The car, formerly powered by a single-turbo small-block Chev, seemed to be on a personal-best mission each time it went out. It wasn’t backed with a high-dollar race team or a bunch of sponsors barrelling cash and product into it, just one bloke with a passion.

With the new upgrades, Khain is looking at running low sevens and close to 200mph with his leaf spring Holden

A couple of years ago Khain pulled the car out of racing for a bit of a revamp, having run a 7.65 at a staggering 186mph – this was on a stock leaf-spring Holden chassis with a nine-inch, CalTrac bars and a set of QA1 coil-overs!

The initial plan was to upgrade the 400ci engine. Originally built by Allan Farrer, it wasn’t really a big-ticket item, with a Little M block, Eagle steel crank, GRP alloy rods and a set of Racer Pro 23-degree heads, but it had been showing 1800hp in the car. “I hadn’t planned to step it up,” Khain says of the engine overhaul, “but I broke the turbo on 32lb of boost and a mate had a set of turbos going at the right price.”

When we featured Khain's HR back in SM December '06, it was running a single T76 Garrett with a blow through carb and a dry-ice intercooler

Speedfast Garage in Penrith completed nearly all the fabrication upgrades. The first job was to get the two big GT47 88mm turbos mounted in the engine bay; it was a big squeeze to get the four-into-one headers with 17/8-inch pipe and three-inch collectors to coexist with the massive turbos. A set of twin 60mm HKS wastegates hang off the turbo exhaust plumbing, with four-inch alloy dump pipes off the back of the turbos.

Some of the engine bay sheet metal has been lost in the process – as has the radiator. Instead there’s a boot-mounted 20-litre tank with a Meziere electric water pump and twin –10 lines front to back. The tank is also fitted with the transmission cooler, and Khain has the option of filling this with ice before each run. 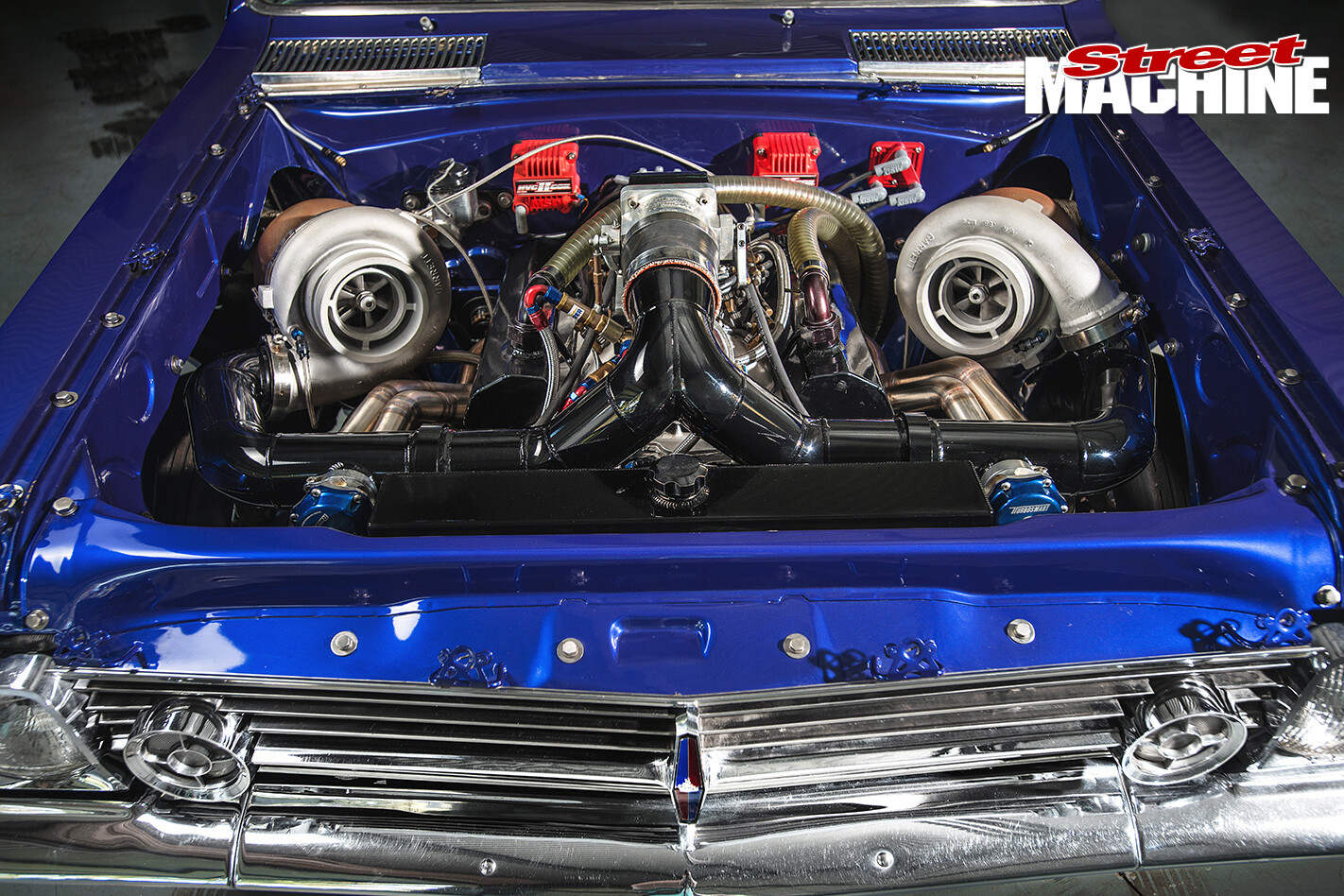 Unlike most big-horsepower deals these days, the car does not run EFI; Khain has stuck with mechanical fuel injection, and there are 16 nozzles plumbed into a Super Victor manifold with a Wilson 95-degree elbow. A 20-litre front header tank feeds an Enderle belt-driven fuel pump, and Khain reckons he hasn’t touched the tune since it has been in the car. “The system is good for around 32lb of boost,” he says, “but once I get beyond this point I’m going to need to start upgrading.”

A single-channel Innovate air/fuel sensor monitors one bank of the exhaust, and while the dash display is a Racepak, the logger is a basic Innovate LM-1 system that has worked faultlessly. It does allow the monitoring of extra channels though, like air and fuel, rpm, CO2 (through the boost controller) and boost. 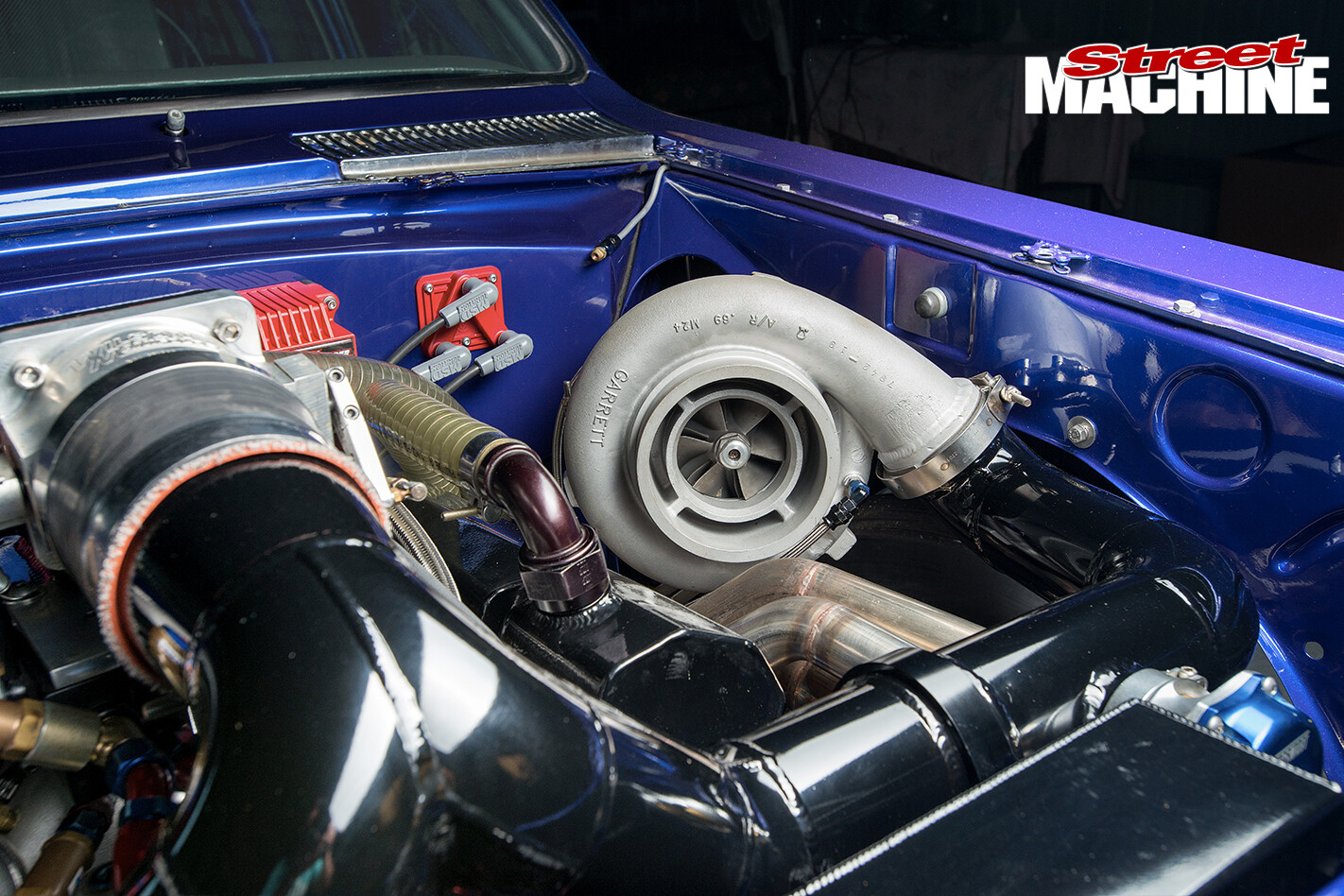 The ignition system is an MSD Digi 7 piggybacked with an MSD 8, and Khain has added the twin-coil option that runs via a Mallory splitter to the distributor.

With everything sorted, it’s time to see how this new deal performs. “I’m going to take the car to a few street meets for some light testing,” Khain says. “I will start on 28lb and see how it goes.”

It will be interesting to see how the power is delivered through the twin turbos compared to the previous big single; after all, radial success is all about power delivery.

For a mid-seven secon car, it's pretty basic inside. Apart from a Racepak dash and Innovate LM-1 AF meter, it's distinctly low tech

“While I’ve added a turbo, I’ve removed some weight from the front and added it to the rear,” Khain says. “I haven’t had the car near a set of scales for a while so I’m not sure what the weight split will be from front to rear.