SOON after Adam Reeves sold his HK about 10 years ago, he experienced an emotion well-known to many street machiners: seller’s remorse. Determined to right that wrong, Adam found this very tidy HK Kingswood, which now hides a tough VN-headed Holden 383 under the bonnet good for 580hp!

Tough HK! How’d you get it to this stage?

In 2011 I spotted one for sale on the internet down in Toowoomba. It was a rough six-banger cruiser that was about five different shades of white, with pretty bad rust damage – which had been repaired poorly! A year later she was ripped apart and underwent a three-year rebuild, which included replacing the full windscreen cowl, floor panels and a few other important bits. It was a big job. 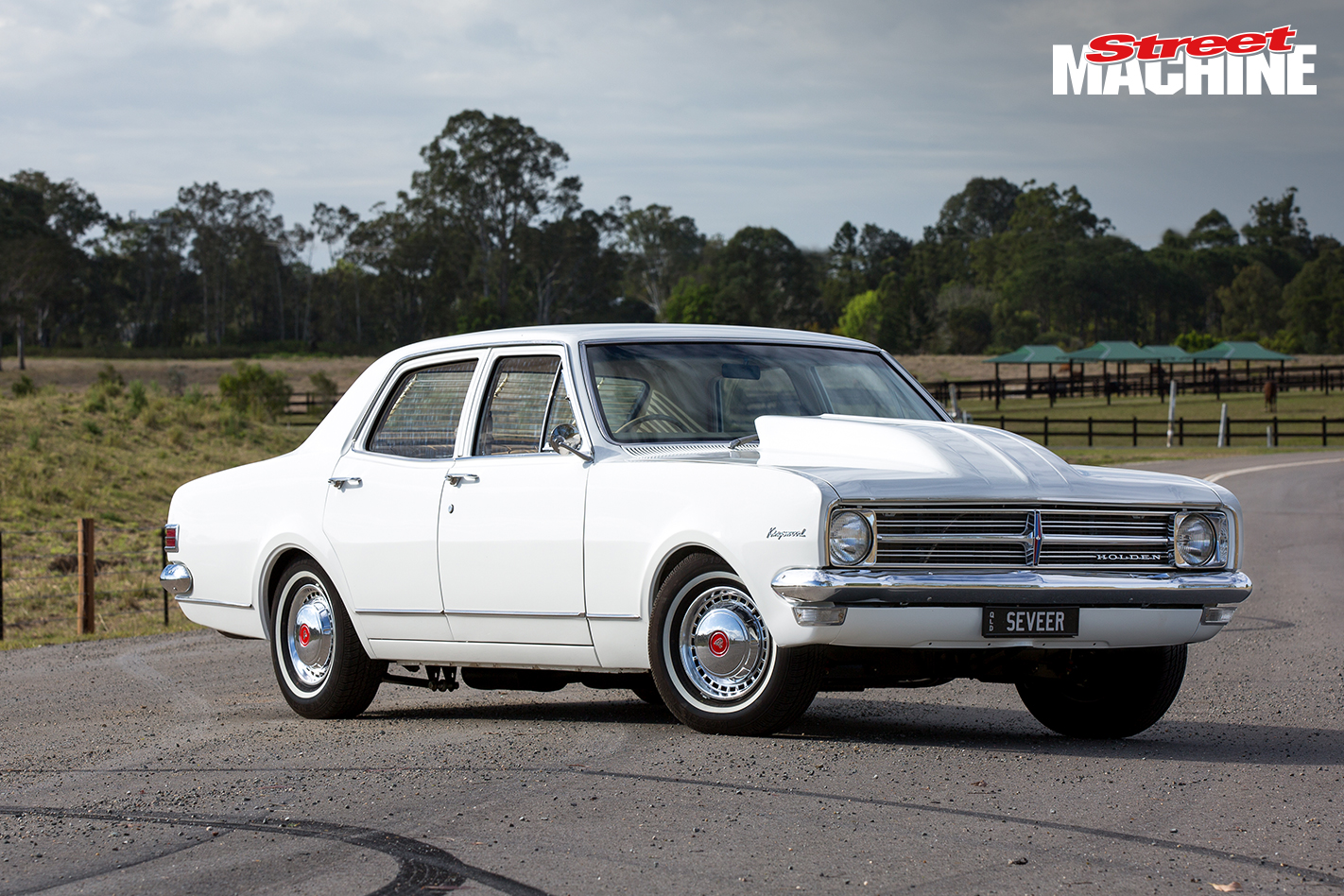 With all that body work you must’ve played with the engine too?

Yeah, the trusty old 186 and three-speed combo is long gone. I always wanted a VN-headed combo, so I got a Holden 304, which was then built to 383 cubes by PHAT Engines. It has a solid-roller cam with COME 590-series alloy heads, Probe forged slugs and a COME rotating assembly. The Harrop single-plane manifold has had a bit of work done to it, including removing all the runner webbing for better heat release. All up this engine puts out over 580hp, which is a lot more than I had originally planned, but Phil Wedrat and the PHAT Engines crew blew me away with their talents. 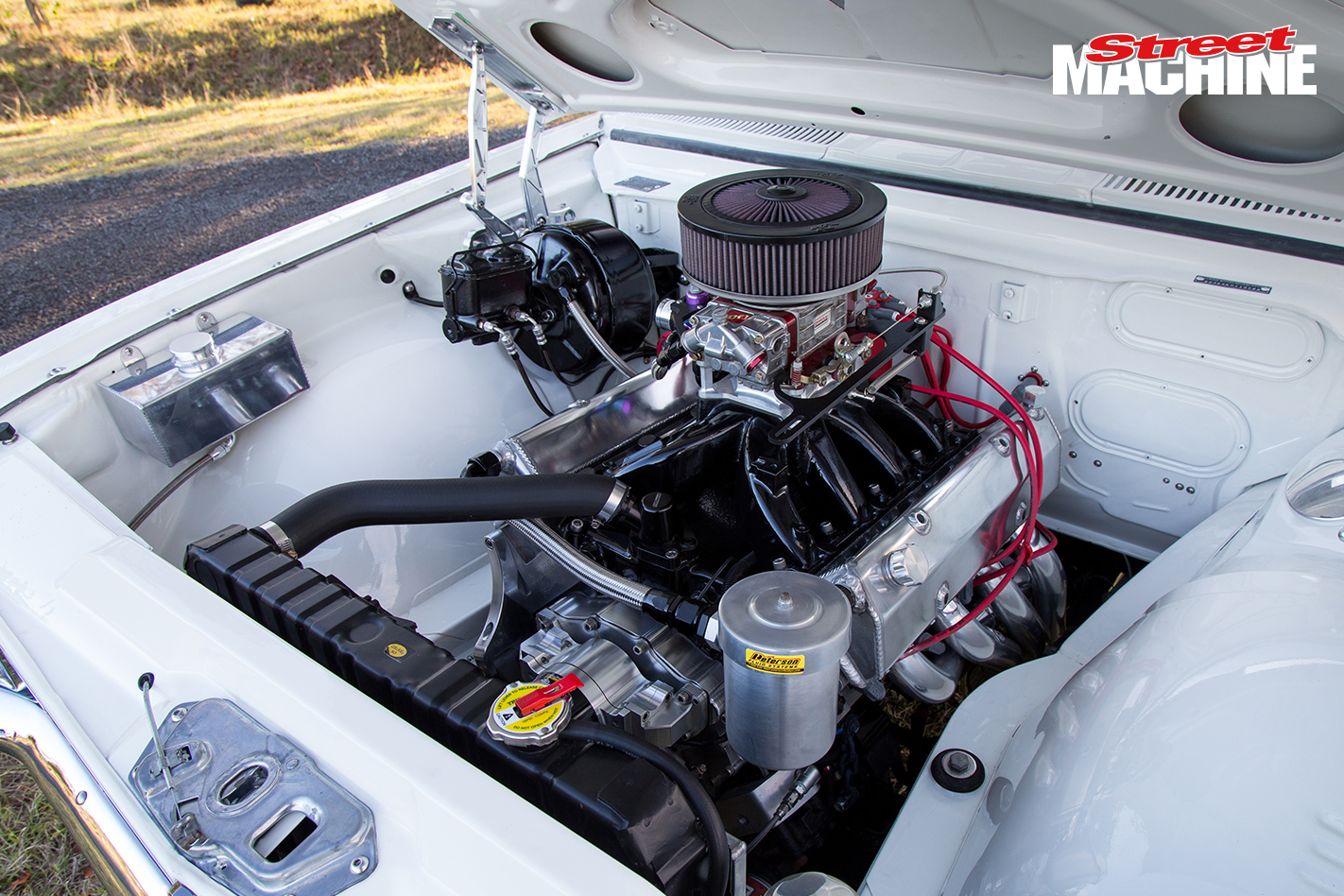 What did you do for the exhaust?

Phil from PHAT Engines hooked me up with Les, Scotty and Chris at Fat Pipes Custom Exhausts. Since no one does a quality set of headers for plastic-powered HKs, the boys started from scratch and built the custom 17/8in headers. The 3.5in X-piped system with stainless mufflers and resonators finishes things off perfectly.

What transmission are you using?

She has a Stef’s Race Glides full-manual transbraked ’Glide fronted by an eight-inch TCE 4500rpm converter. There’s a custom 3.5-inch driveshaft made up of chrome-moly 1350 yokes, unis and weld ends from Strange Engineering, and it has a nine-inch in the rear with 4.11 Motive gears in a nodular carrier with a Strange 1350-series chrome-moly pinion yoke. It’s all supported by a custom set of Fireball Custom Fabrication traction bars built by Andy McConnell. 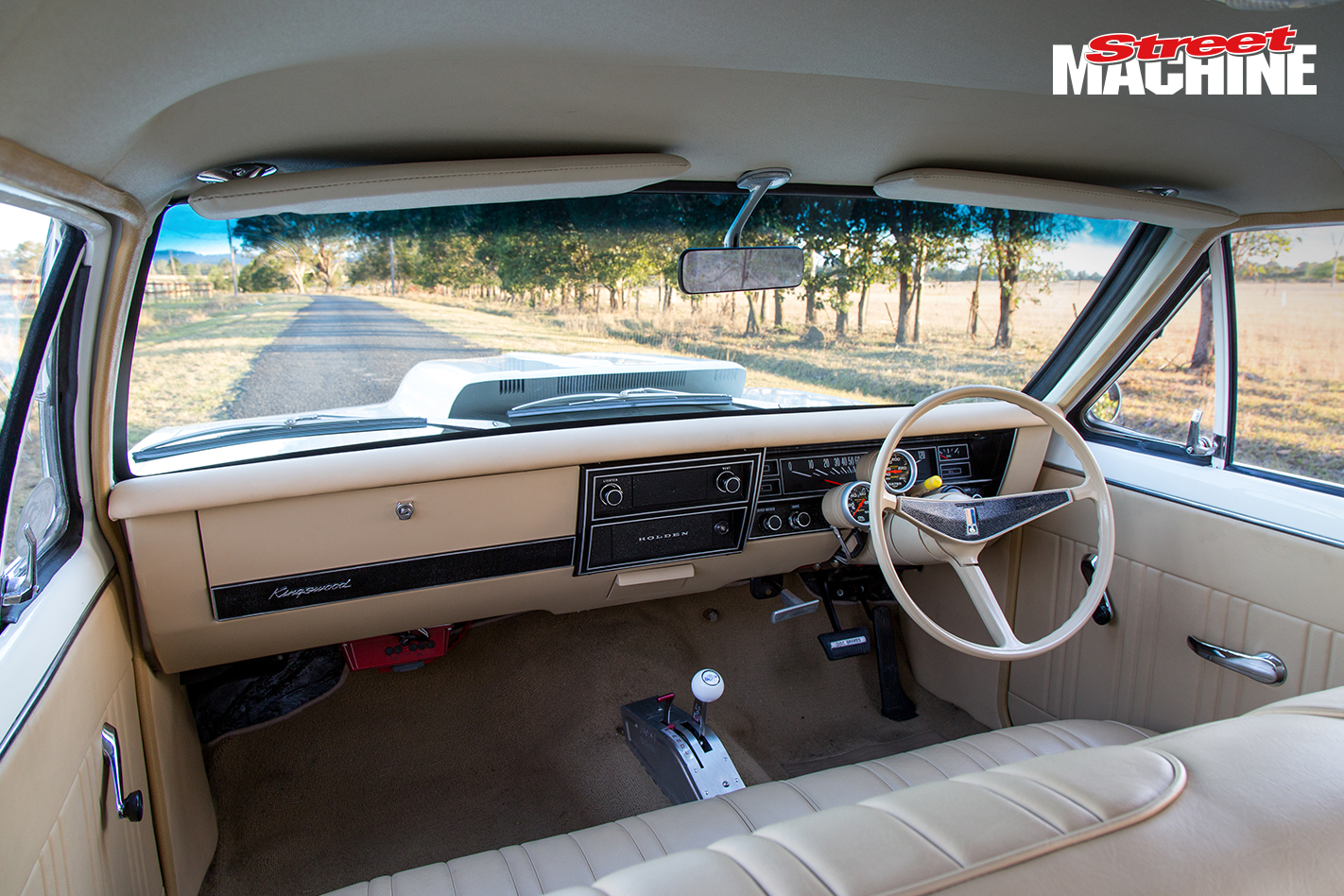 Greg Anderson at Spectrim Auto Interiors on the Gold Coast took care of the trim. It took me three goes to decide on the final colour, but after that my only instruction was no front armrests and to keep to the original style. He nailed it better than I could have imagined. 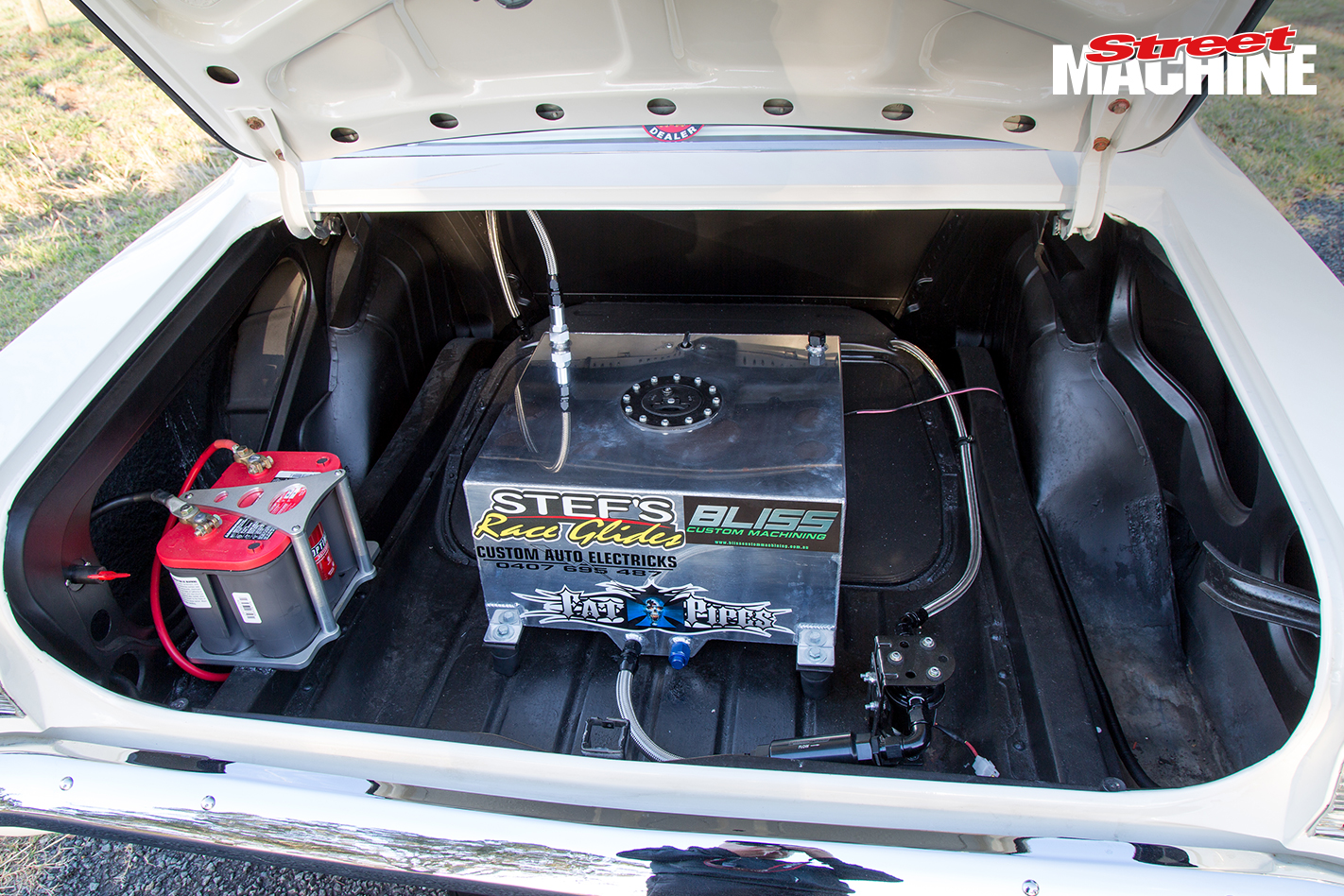 It looks pretty stealthy from the outside; love the hubcaps!

Our original goal was to run 11s on hubcaps. I wanted to keep it looking nice and simple. The only change from factory is the four-inch Alfa Motorsport Fibreglass cowl scoop – more for necessity than for fashion. Chris Osmond grafted it on for me. Same with the paint; I didn’t want anything attention-grabbing, so we stuck with two-pack Ermine White to keep the exterior clean.

What’s next on the agenda?

I’ve had her out to Willowbank and did a best of 11.74 at 98mph on radials. The convertor is letting us down though, so we’ll do better when we go out after Summernats. Then I’d like to up the compression a little and put it on E85. Hopefully then we can crack a 10. 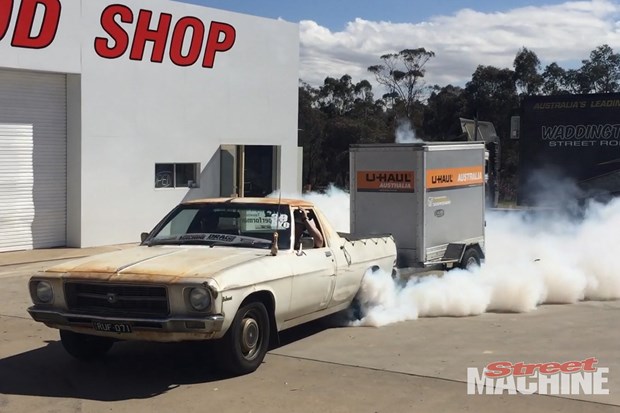 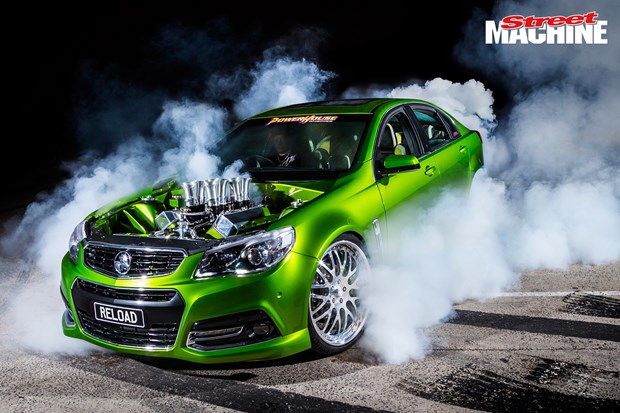 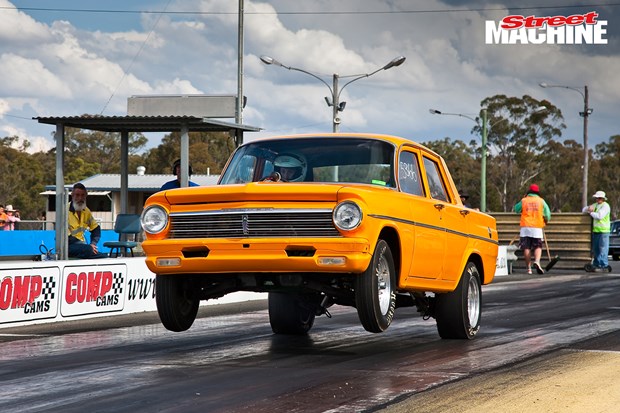