THE modern Mustang is renowned for a great many things; not all of them good. However, the performance capabilities of the factory 5.0-litre Coyote engine on a stock bottom end are quite incredible.

For around a year now, Bill and Nicholas Tzavaras, father-and-son owners of Northmead Auto Centre in Western Sydney, have been working on their twin-turbo 2016 Muzzy, which they bought straight off the showroom floor, drove back to the shop and pulled apart. 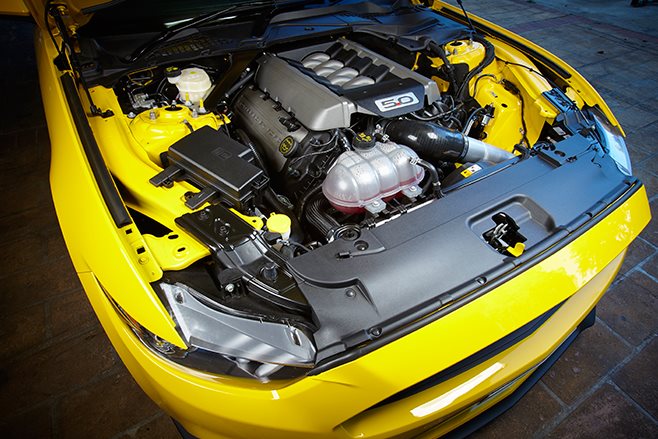 The Mustang looks pretty much stock from the outside, but a bunch of work has gone on under its skin to get the car straight into the nine-second zone. With some more fettling, the boys are gunning for an 8.8

While the car still looks stock as a rock, it’s a had a ton of work done to it, and on its first full pass at Sydney Dragway it ran a 9.3@148mph, putting it straight into the top five quickest stock-bottom-end Mustangs in the world.

As with most modern cars, there is very minimal room in the ’Stang to fit anything like a pair of turbos, so the bulk of the time has been spent getting the twin Precision 60/62 snails mounted under the car, at the rear of the gearbox. 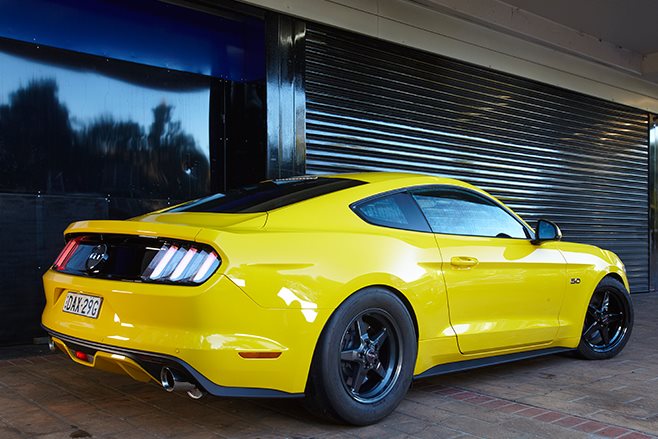 With the stock manifolds being just too small and with no room for four-into-one headers, a set of 2.5-inch log manifolds were made. The tedious job of completing the hot side took considerable time, compounded by the fact that both turbos needed to face the same way. Without left- and right-hand housings being available, the plumbing was a nightmare.

The stock oil pan was removed and fitted with turbo drains, and the factory oil pump, an item often earmarked as a weak link, was upgraded with aftermarket internal gears. Other modifications included a remote-mounted engine oil cooler with fan under the passenger-side guard, and a custom-made 100mm-thick bar-and-plate front-mounted intercooler.

The rest of the exhaust was ditched for a twin stainless three-inch XForce system, with 3.5-inch dump pipes off the turbos and twin 50mm Turbosmart wastegates, plumbed back into the system to comply with RMS engineering standards. The stock catalytic converters were also ditched for 100-cell high-flow units that allow the car to still pass emissions standards. 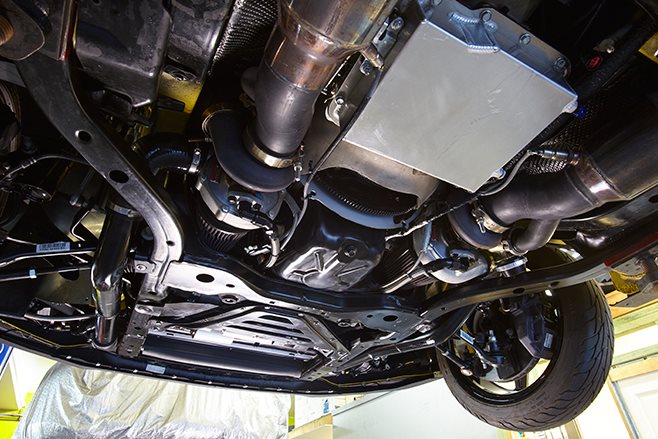 With precious little room in the Muzzy's engine bay, the twin Precision 60/62 turbos have been mounted underneath the car

With the Mustang up on a hoist the whole set-up looks pretty killer, and the upgrades continue at the rear. While the diff centre is still stock, the rear driveshafts were replaced with Ford Motorsport items that are rated as unbreakable and cost about $3000 a pair. Other rear end upgrades include ditching the stock suspension bushes for solid alloy units. While this may seem extreme in a new car, Nicholas claims you don’t even notice anything different on the street.

With big horsepower on a radial tyre, it was imperative that the rear shocks were zeroed in, so the boys opted for a set of Viking double-adjustable items, which they admit they haven’t had the chance to mess with, given the car has only done one launch and one full pass.

“We will need to get a handle on this as we intend to bump up the startline boost from 4psi to whatever the limit of the 305/45/17 Mickey Thompson tyres and the rear suspension is,” Nicholas says. 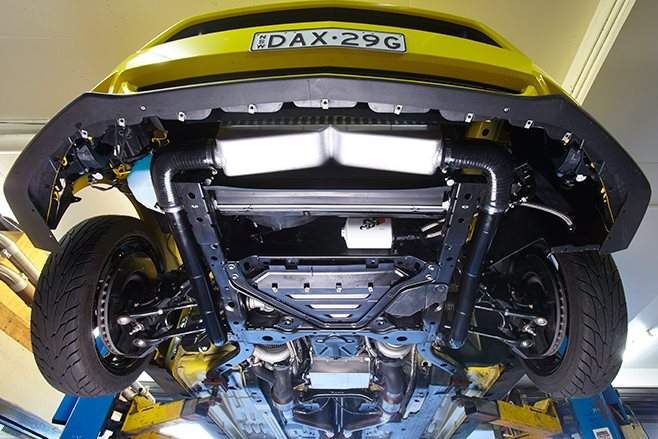 The biggest challenge with the car has been the factory ECU. It is incredibly complicated, with multilayer mapping and charting, and has a predisposition to keep returning to factory settings. The boys have tried every option to get the ECU changes to stick, but every few days the ECU would go into limp mode.

“We just couldn’t invest any more time in it,” Nicholas says.

“The Americans wanted to sell us a tune-up that we couldn’t modify or access, so there was no point to that,” Bill adds. “We wanted control over the tune-up ourselves and to be able to learn what these combinations like, not take someone else’s version of it.”

In the end, they put an EMS ECU in the car and went back to tuning and developing. It’s said to be the first for the Coyote motor. 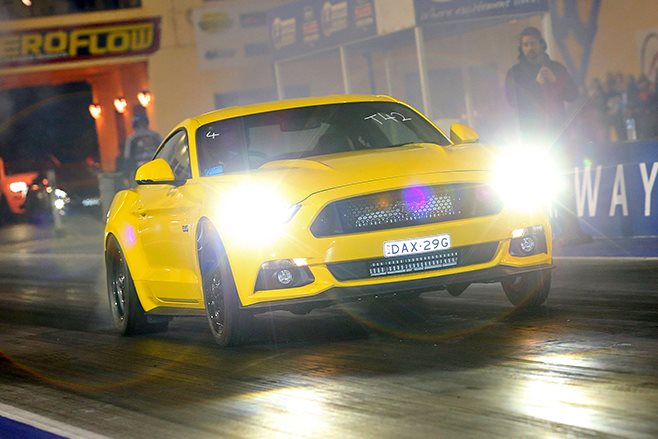 Naturally the fuel system needed to be upgraded and the factory in-tank pump now feeds a surge tank with three 400L-per-hour Walbro pumps that run up to a Turbosmart fuel pressure regulator, with Speedflow fuel lines and fittings throughout, and eight ID1300cc injectors.

The factory six-speed manual transmission has since been replaced with a Reid-cased two-speed Powerglide with all the fruit – including a straight-cut gear set, ringless input shaft and pump – and a nine-inch PTC mid-4000rpm stall converter.

On the dyno the little 5.0-litre cranked out 713hp at the rear wheels at 7200rpm on 14.5psi of boost. While the boys are not too keen to lean on the overall figure for a while, they will work on the launch for the next few meets once a rollcage and ’chute have been fitted. 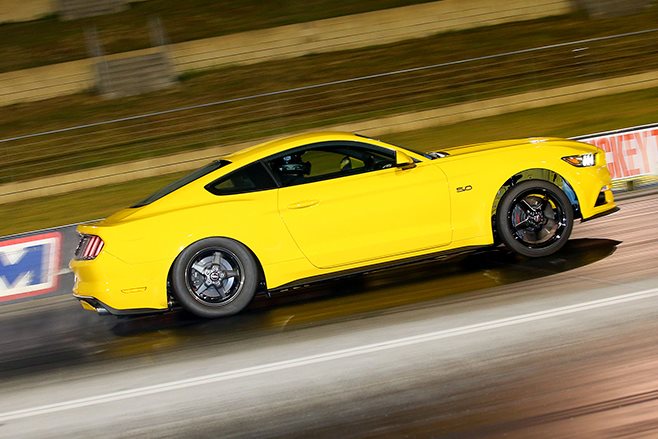 “We are confident of running an 8.8 with this combination,” Nicholas says. “We are currently finishing a whole new car, which will be supercharged instead, and we have our sights firmly set on the Australian record for both turbo and supercharged versions. The new car will have the factory six-speed auto to silence the knockers who grumbled about this car having a Powerglide in it.”

With the new car set to debut in a few weeks, there are exciting times ahead at Northmead Auto Centre. One thing’s for sure: These boys have the talent and resources to make it happen. The fact that the turbo car ran a 9.3 on its first full pass is evidence enough of the quality of the preparation.