As usual, it’s big! We’ve got a whole new website dedicated to SMOTY 2015, where you can check out the 16 finalists and download the full SM feature articles on each of the contenders.

Voting is open now, so check it out and vote for your favourite street machine to get them closer to winning the grand prize – a $20,000 cheque thanks to our good friends at Valvoline.

By voting you’ll also go into the draw to win the ultimate Summernats experience. You and a mate could be off to Canberra on us, with flights from any capital city, four nights’ accommodation and two gold passes to Summernats 29. We’ll even hook you up with a bunch of Street Machine gear and VIP passes to the exclusive Street Machine party!

Here are this year’s contenders: 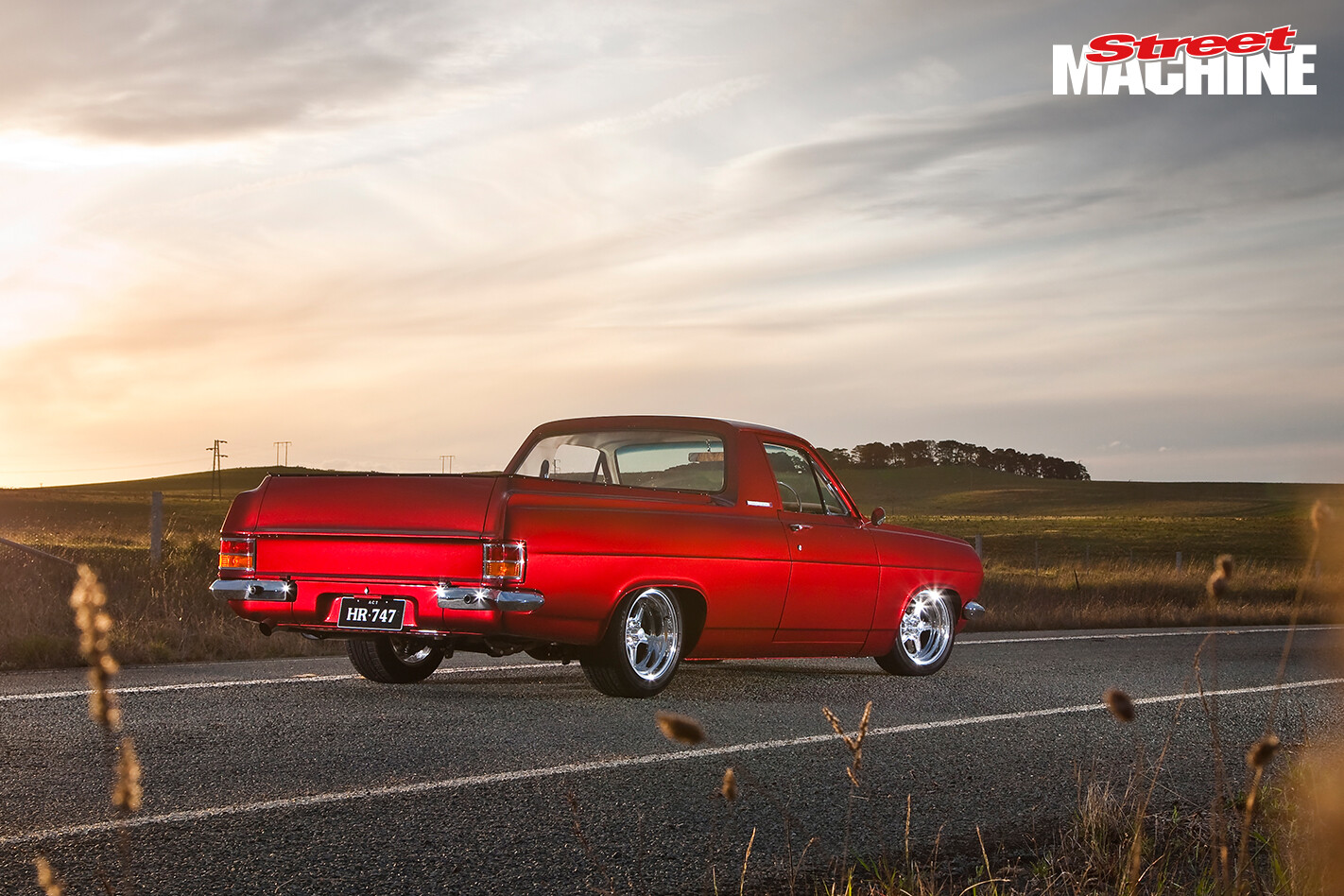 PURCHASED when he was 12 years old, Nathan’s ute received a decade of dedication to become an elite-level show-stopper. The Ruby Red pearl duco, timber tray and 15in Billet Specialties alloys contrasts effectively against a mould-breaking Nissan RB25 turbo conversion backed by a built Jatco trans and custom four-link rear end. It’s yielded a ute-load of trophies, including a Rare Spares Encouragement Award in the Elite Class at Summernats 28. FOR inserting a Hemi into an XY Falcon, Blake was expecting a lynch mob; instead he received nothing but appreciation. A McDonald Brothers twin A-arm front end allowed the fitment of the 572ci Hemi big-block, a bolt-on Mustang brake upgrade package and 20in Simmons FRs. Finished in HOK Galaxy Grey, the Falcon eschews chrome, with wheels, grille, bumpers and even the engine finished in black – the latter using Ultimate, a product never before seen on a car. 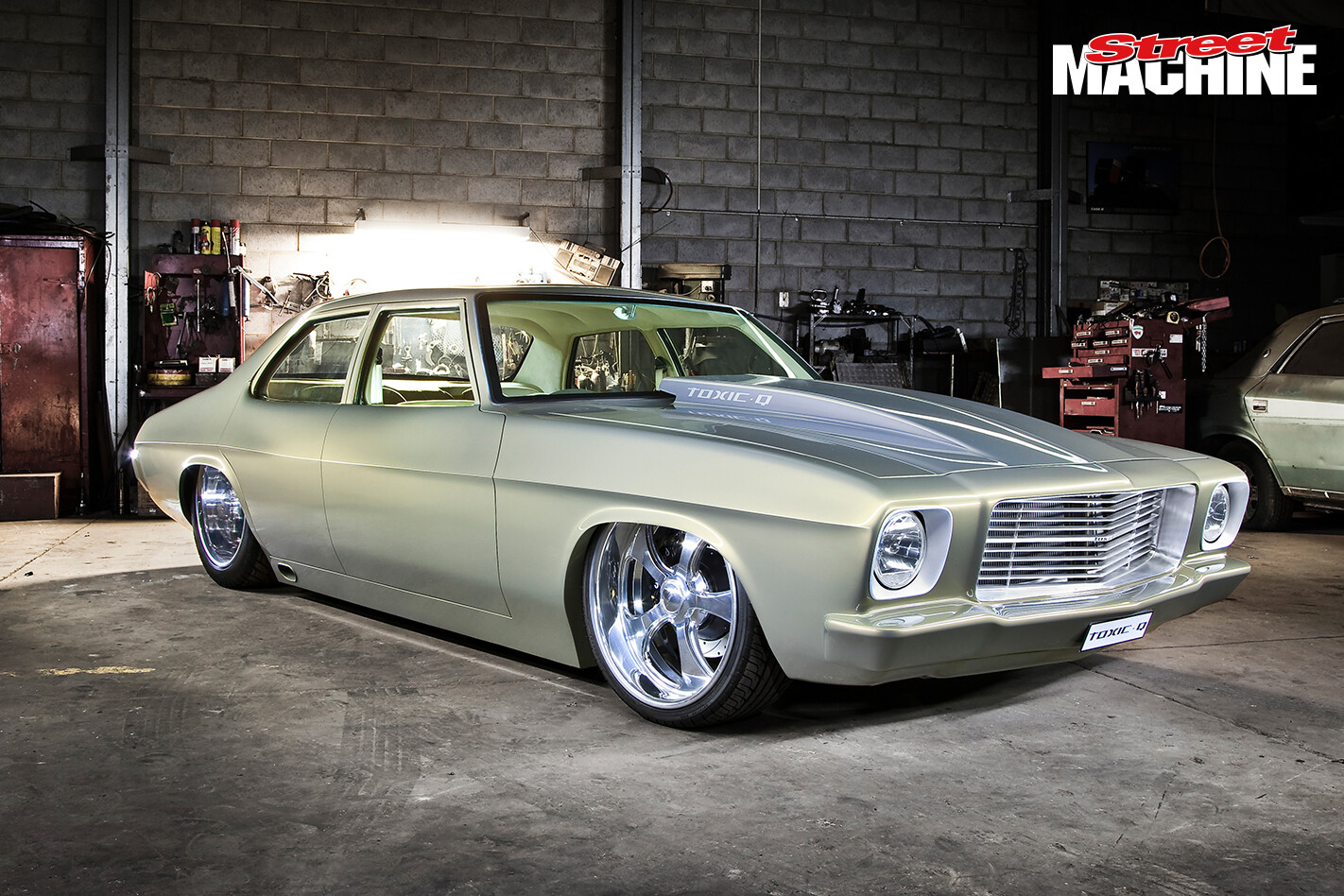 ONE of the sharpest, slickest HQ sedans to hit the show scene, the Ackovskis’ Kingswood is a rolling work of art. Debuting at MotorEx 2014, TOXIC Q features an eight-throttlebody 468ci Chev nestled in a clinically clean engine bay, overshadowed by a vast array of body mods: chopped roof, dropped sills, tucked bumpers and sharpened swage lines of such quality they appear almost factory. Lou started the project with a set of 20in Schott rims and worked up, leaving nothing untouched. COMBINING elements of both pro street and pro touring, Zane’s 500-cube, Wedge-powered Satellite is truly otherworldly. Wilky’s Pro Paintz retained the 1970 model’s unique side scoops but smoothed almost everything else; tucking the bumpers, flattening the firewall, raising the floor and fabricating tubs for the 20x15in Boyd Coddingtons. The Satellite won People’s Choice at the 2014 Brisbane Hot Rod Show, but is a cruiser at heart, retaining the factory front bench as proof of concept. LANDING on our soil as a stocker, Gary’s LS1-powered C10 underwent a ton of mods before it was debuted at Summernats 28. A fully detailed chassis resides underneath, while body-wise all edges have been sharpened, with the peaked style line continuing around the rear of the tub. Distressed leather trim and Classic Instruments gauges ensure a period feel inside, while ’bags and 22in Center Line Smoothies afford the C10 an incredible stance. Nailed a Top 60 berth and Top Pick-up at Summernats 28. 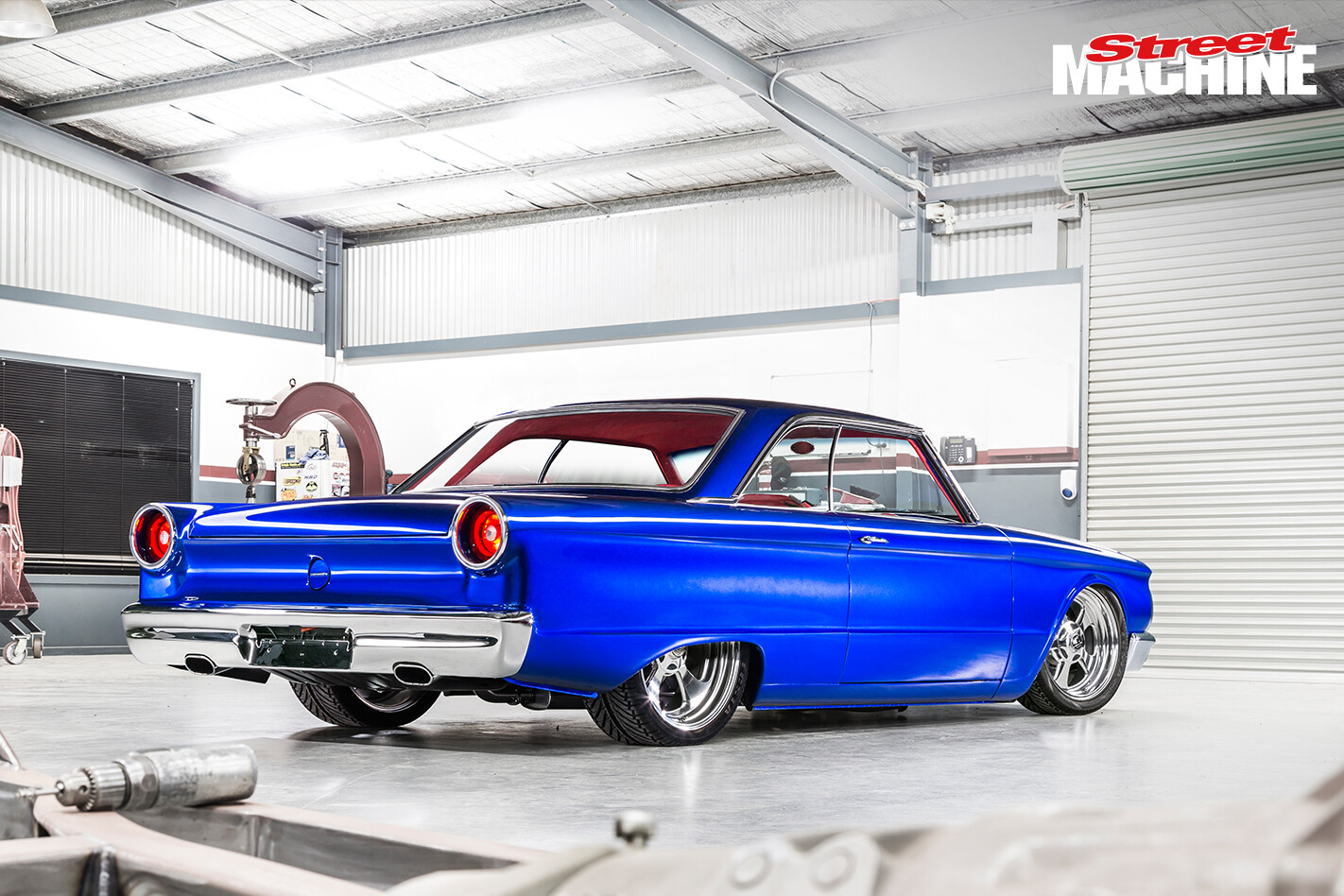 DEAN’S XP had been in the family for 35 years prior to its Summernats 28 debut. Southern Rod & Custom fully refurbished the coupe, replacing all the rust, paint and interior with fresh metal and personalised touches including PPG Blue Pearl duco and Mercedes pews wrapped in bright red leather. Mum’s old six was also binned in favour of a built 347ci Windsor running eight V8 Supercar-style throttlebodies, with airbags and Billet Specialties Vintecs dialling in the right amount of attitude. CONSTRUCTED to pro-tour the USA and rattle the establishment at SEMA, Rob’s Rides By Kam-built Chev Nova has re-written the rulebook in many areas. The 400mm Brembos, six-spot calipers, custom Ridetech front arms and Speedtech drop spindles all provided plenty of headaches as the team battled to mesh all the elements together. Custom bodywork abounds, and the inside is swathed in deep burgundy leather. The twin-supercharged 572ci Merlin big-block puts out 1500hp on pump gas. 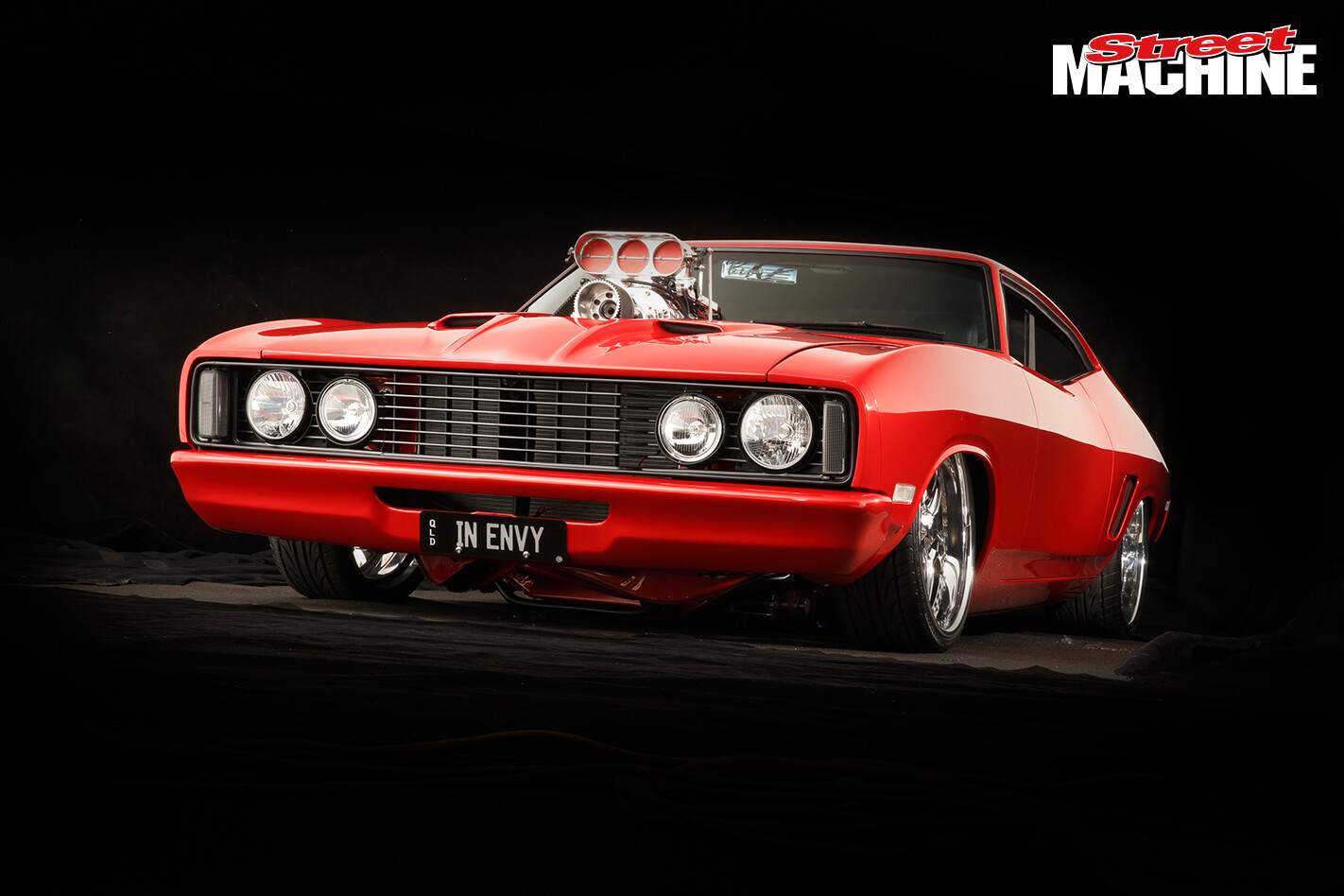 SOME one-family cars remain locked in a time capsule; not so Brock’s XC coupe. Bought off his dad for $20 back in 2000, a full Rides By Kam renovation has seen the car fitted with a blown and Bug-Catchered 383ci Dart Windsor, backed by a manualised TH400 and nine-inch. Built to drive, the XC has been trimmed in dark leather, includes twin billet cup holders, is doofed by a trick Pioneer audio-visual system and rolls on 20- and 22-inch Billet Specialties Patriots. Brock’s Dad loves it. ROB’S long history with VL Commodore turbos saw him ditch the 355 stroker supplied with his Torana in favour of a high-revving RB30. Strengthened inside, the motor is topped with a DOHC RB26 head and force-fed by a Garrett GT42-based custom turbo. Backed by a Powerglide running an insane 7200rpm stall converter, the Torana has made 760hp at the wheels while handling 41psi of boost! Not even tubbed, it has run an 8.71 on a set of drag radials. WHEELSTANDING 1000hp 582ci Monaros aren’t thick on the ground anywhere, let alone in the USA, but Greg’s HQ puts the ‘street’ in street machine; it’s about to compete in Drag Week 2015 in the US. Running the classic combo of big-and-little Convos, an octet of mechanical injector stacks thrusting skyward from the engine bay, and finished in a custom purple hue offsetting a traditional GTS-style interior, it’s bound to impress the Yanks with two wheels off the deck. OLD Skool by name, new-school by nature, Mick’s ’bagged Mainline hunkers down on a set of Bonspeed Quasar rims – 17x7 up front and an incredible 20x15 down back. Topped by a pair of Quick Fuel carbs, the chromed, polished and detailed blown 390ci Windsor was built to burnout-car specs, but don’t expect this ute on the pad too soon – air, steer, leather interior and thumping stereo all mean it’s a cruiser as much as a bruiser. HARKING back to the street machines of yore, Shane’s HZ runs a fully polished and detailed 355ci Holden stroker motor with a pair of 600cfm Holleys on top, 14-inch American Racing Indy ‘jellybeans’ underneath, wheelarch flares either side and a custom HX Statesman double grille up front. Modern touches include suicide doors, Commodore buckets, double-skinned bonnet and ’bags all ’round, getting it lower than any ute has a right to go. JUSTIN’S KINGGM generates over 500hp at the treads from a 408ci L98 boosted by a S480 BorgWarner turbo. While some modern streeters lack the panache of a classic, a full rebuild encompassing subtle custom body mods, smoothed engine bay and a custom-mixed bronze duco ensures Justin’s VY can mix it with its chrome-laded cousins. Enormous AP Racing brakes are hidden behind a set of Simmonses, just like the old days, albeit in 20-inch format! SOME things need no improvement – the factory colour, shape and interior of Australia’s Charger being three of them – but Mick’s VH sports enhancements where it counts. Rocking a built 408ci Chrysler small-block and backed by a 727 with a 5000rpm stall, the Charger is as comfortable cutting 10-second quarters as it is pootling around the ’burbs. With an all-steel reverse-cowl scoop and a set of big-and-little Weld Magnums, there’s no doubting the potential should Mick mash the pedal. MARK'S LC is so much more than ‘just’ a drag car. With 763 cubic inches of Outlaw-spec V8 not remotely contained by an enormous reverse-cowl scoop, and swathed from end to end in mesmerising PPG Crystal Bay Blue duco, this car is a show-quality stunner. Naturally aspirated, but running plenty of nitrous, the engine should be good for 2000hp; Mark is keen for a mid-six-second quarter once we all stop staring. 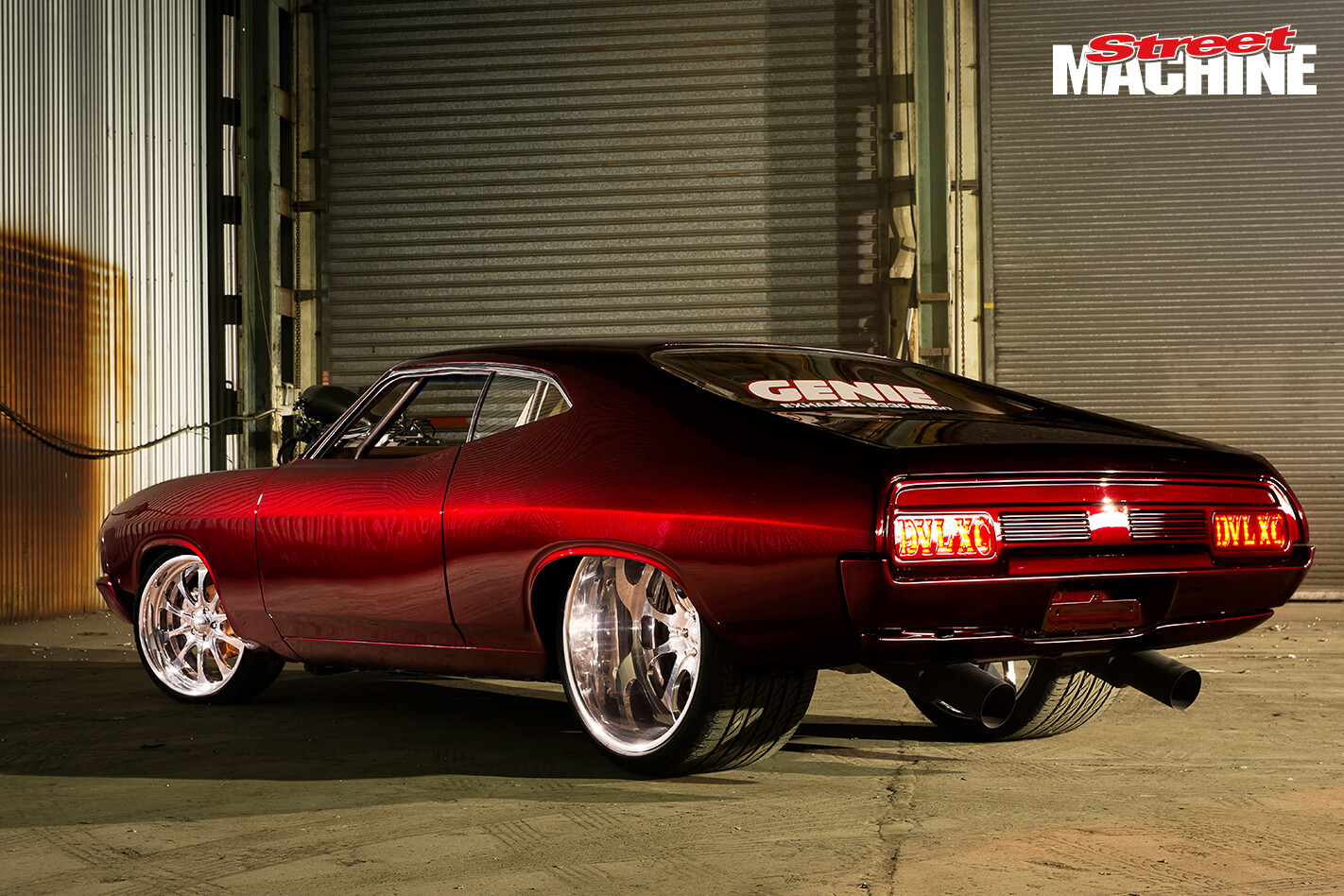 A DECENT candy paintjob is a winner in anyone’s books, but DVLXC’s HOK Brandywine Kandy is something else. The black base it’s laid over results in a dark hue until the light hits it, and then pop! By then you’re distracted by the 526ci Ford big-block, topped by an enormous Kobelco 16/71 blower and good for 2200hp. Destined for the burnout pad despite a beautiful two-tone leather re-trim, underneath the car runs epic wheelage – Intro Malibus measuring 24x17 at the back!