THERE are a few tried and true formulas for building a street machine that are guaranteed to earn admiration from your motorheaded brethren. We could lecture you on the clichéd terms — less is more, dare to be different — but it’s probably simpler to sit back and soak up these images of Chris Hardwick’s HT Holden panel van. It draws on elements of simplicity, balance, a less common body style and crisp aesthetics to create a knockout package. 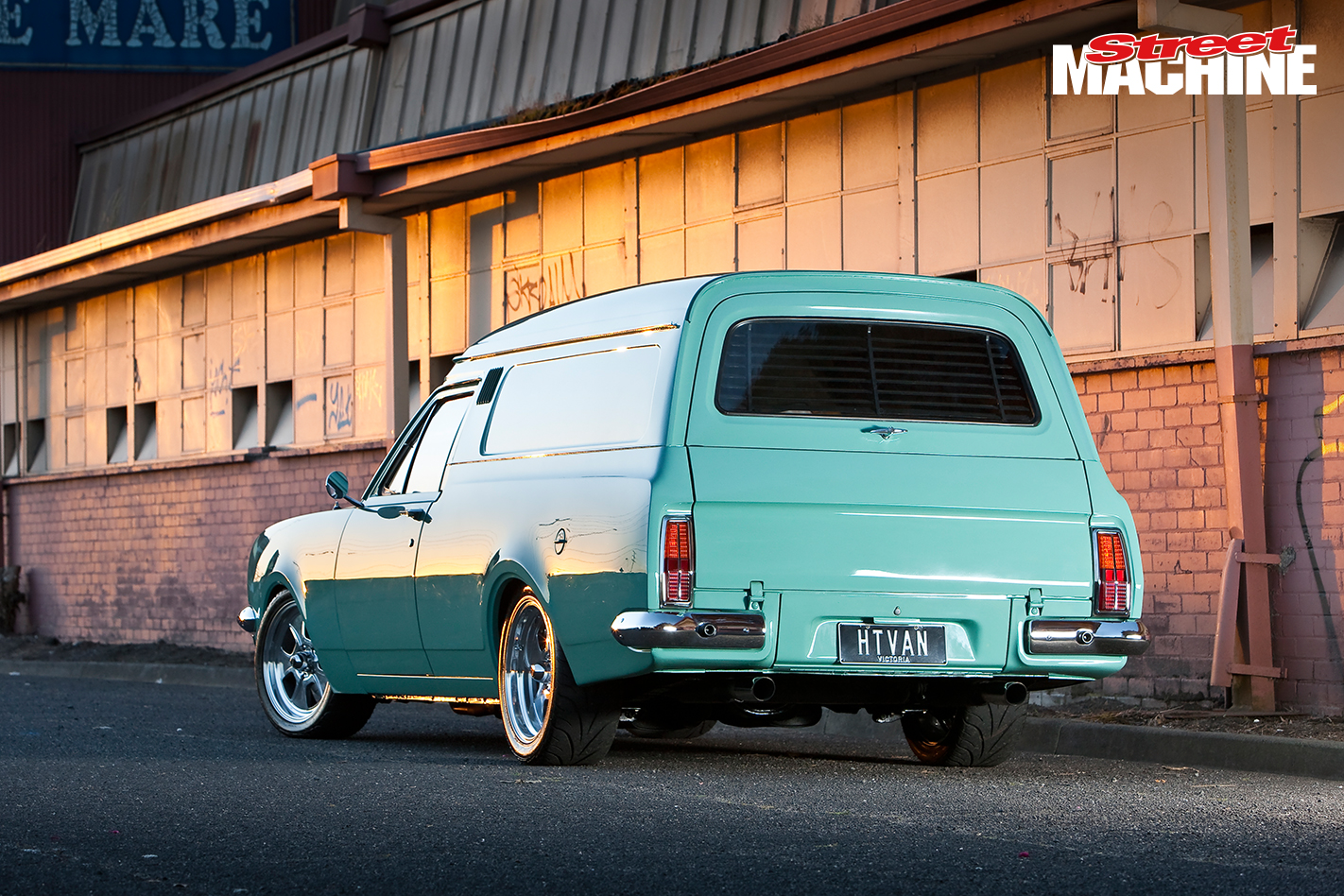 Normally the words ‘simple’ and ‘panel van’ are an oxymoron but Chris’s HT proves that a high-roofer isn’t tied to the traditional stripes or custom paths. “I’ve always loved the look of a well-finished, clean panel van,” Chris says. “In my 20s I built an HZ van to a very good standard with a nice 308, Turbo 350, nine-inch and decent wheels, but that went pear-shaped after a grub in a stolen car ran a stop sign and T-boned it. “I dabbled with a few cars and bikes over the years but got sidetracked establishing my own building business. In 2009 I decided to have a crack at another car.” 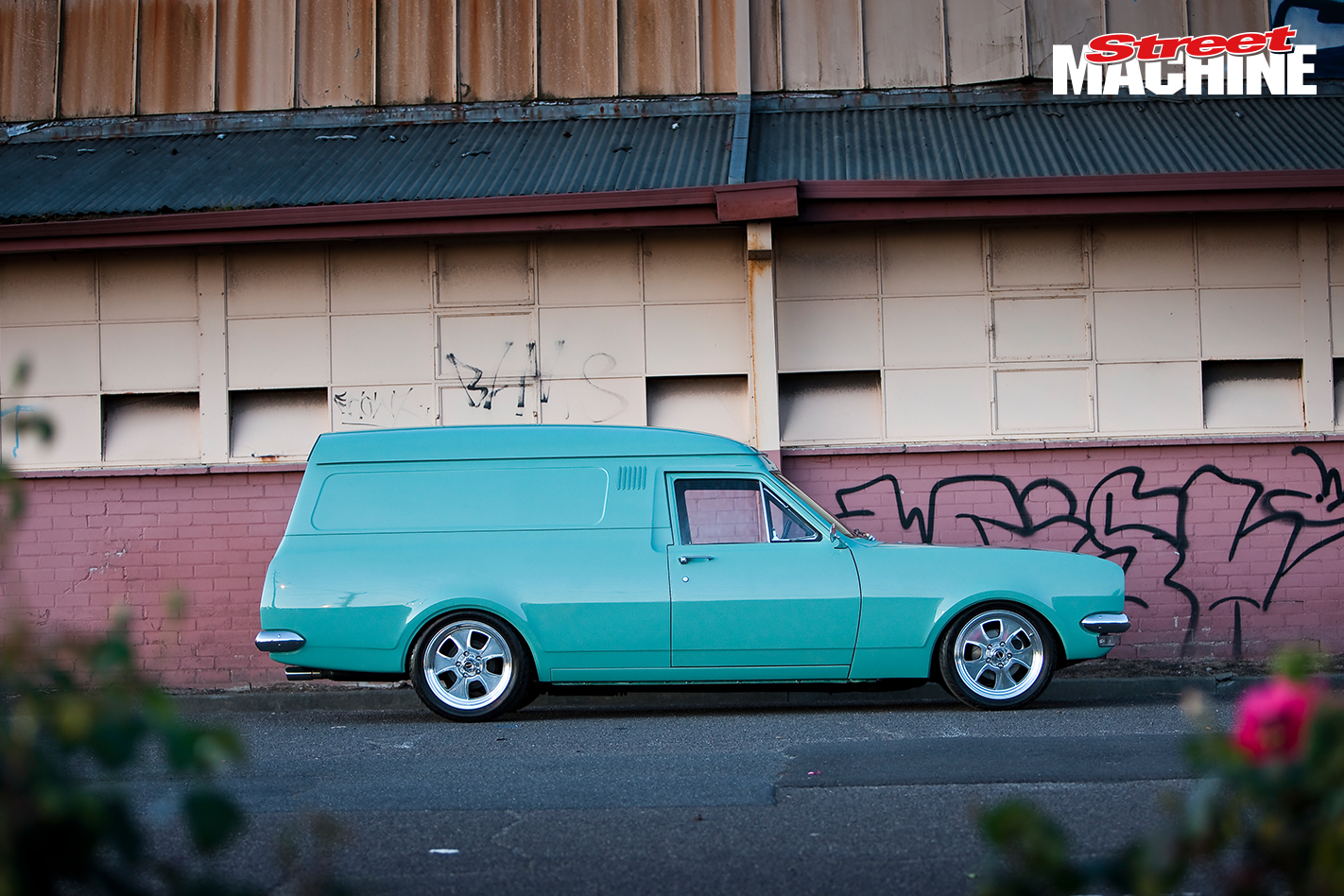 He looked at a few options before settling on another van, the only real plan being that the finished product had to be streetable with a tough motor and look as if it’d been bought from the factory fully optioned. “I’ve always liked windowless vans and they’re a bit of a rarity these days. This was the only real pre-requisite for the project and it’s probably why it took me a few years to find a decent one. It was a legit barn-find; the address was well and truly off the beaten track and didn’t even come up on GPS or in the street directory.” 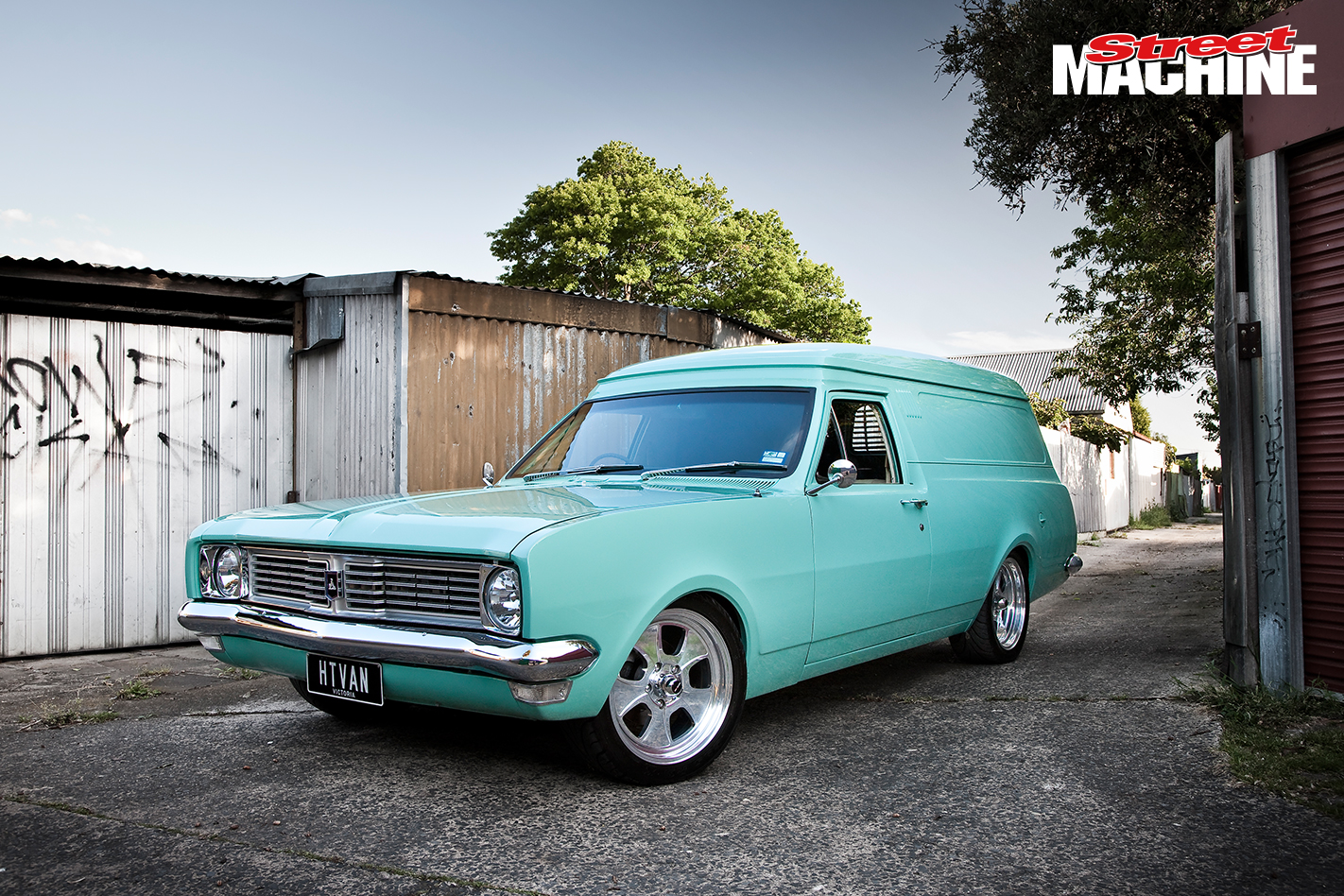 It was worth the sleuth work as the body was solid and straight, sporting very little rust. Chris stripped the van and also tackled the laborious removal of the old underbody deadener — in his  gravel carport — before it was shipped off to Andrew McBean at D&D Panels in Thomastown, Vic, for minor floorpan repairs and final body prep. The temptation to add a GTS bonnet and guards was ignored so as not to disturb the clean windowless lines; shaving the Belmont badges is the only deviation from stock. 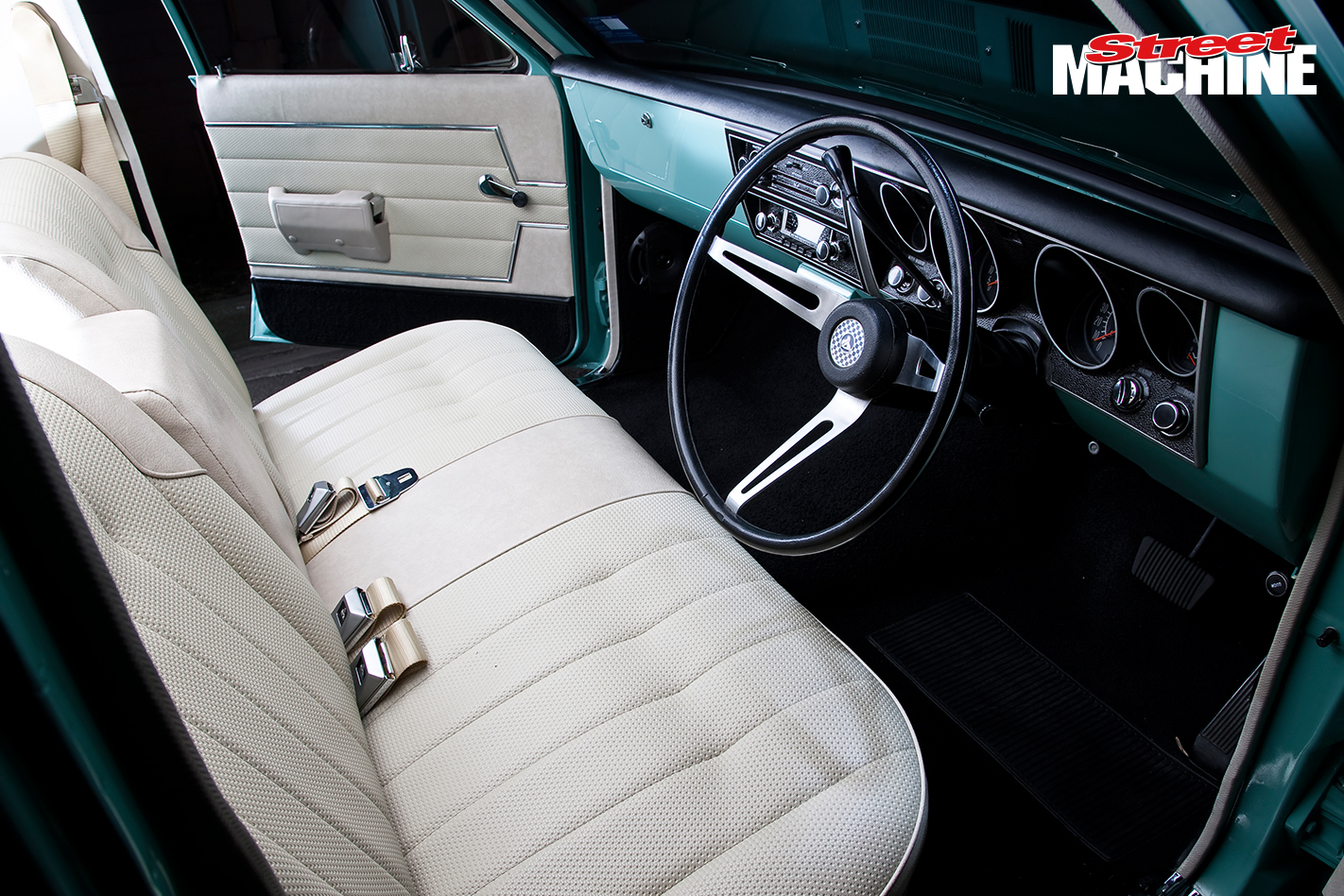 Andrew at D&D then drowned the HT in Pyrmont Green: “I kept with a stock HT colour as I wanted it to be era-correct. However, a touch of blue was added to really make it pop.” Sticking with a factory colour eased the often tedious task of choosing a top coat, and one look at the fresh chrome against the long, clean rear quarters shows he made the right choice. 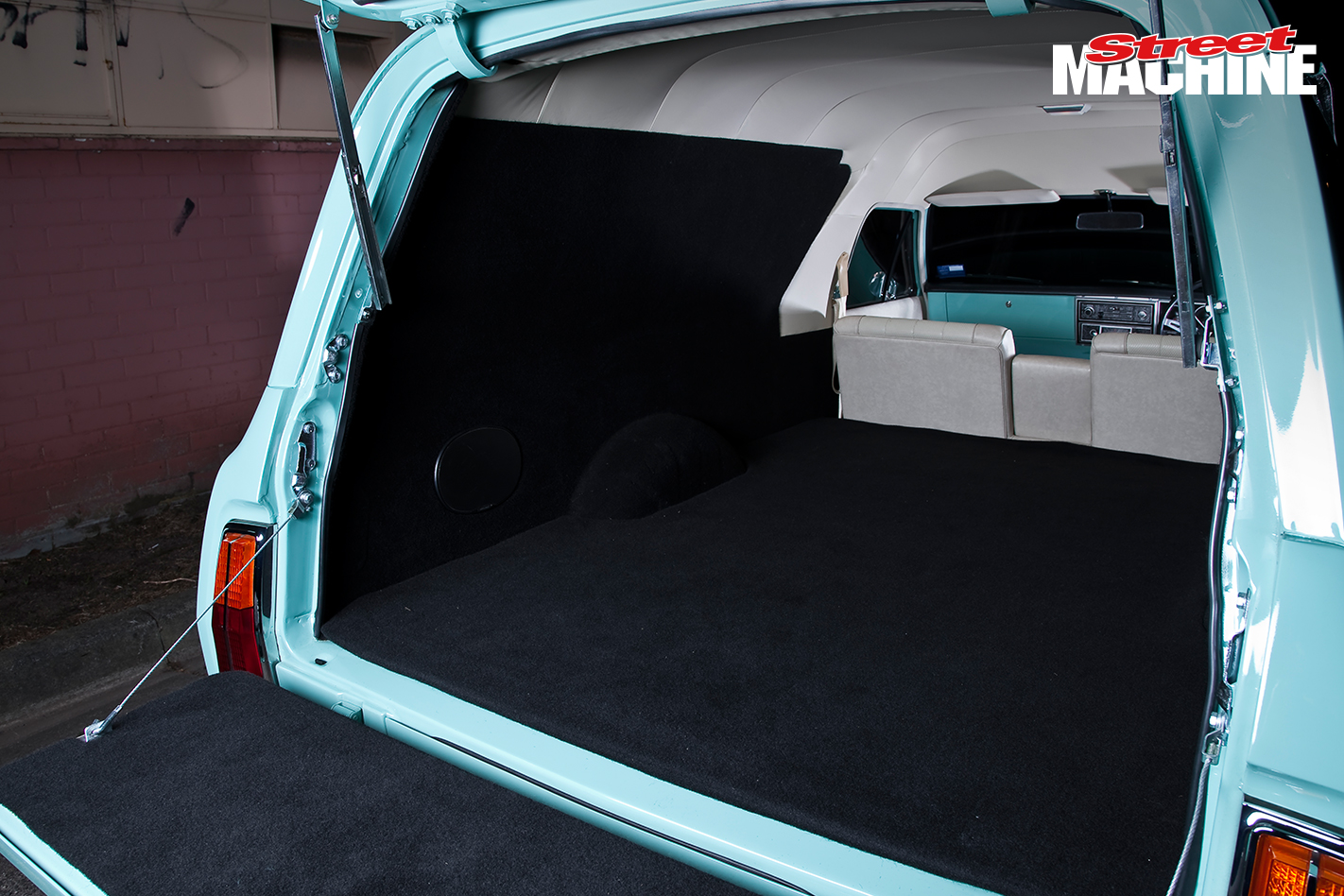 While the body was away, Chris knocked up an assembly shed to replace the carport and called on good friend Mick Mildren from Renegade Automotive and Marine to build the motor. Wayne Cartledge from Racecomp Performance in Craigieburn sorted the machining. “I told Mick and Wayne that I wanted something streetable, tough and reliable and decided that a 350 Chev was the go.” They sourced a new block from the States which was tickled up to 355 cubes and filled with a factory steel crank swinging Scat I-beam rods and Hypatec pistons. Wayne ported and polished the alloy heads, fitting Comp Cam valves and matching springs and retainers. Comp also supplied the 0.525in lift solid cam and lifters, which support Crow hardened pushrods and Crane shaft-mounted roller rockers. 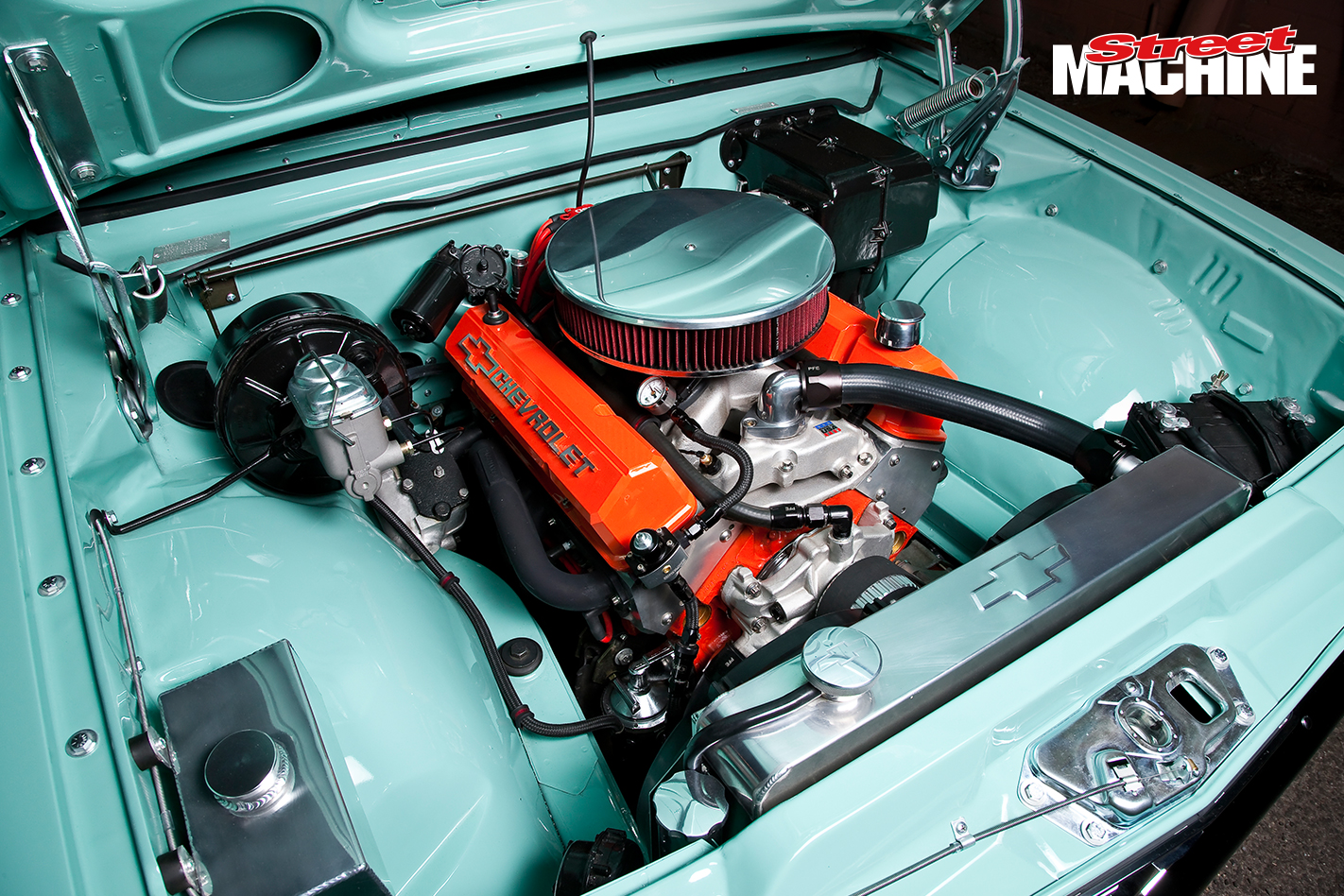 A Mellings high-volume pump lifts oil from an ASR sump. The ignition is all MSD and includes a 6AL-2 module, Pro Billet distributor and Blaster coil. A Quick Fuel 750 Drag Series carb and Edelbrock Air-Gap intake complete the engine package, while Pacemaker extractors and a twin 2½in system sort the exhaust duties. An Aussie Desert Cooler four-core aluminium radiator keeps a lid on temps and twin thermo fans make cruising in traffic a breeze. 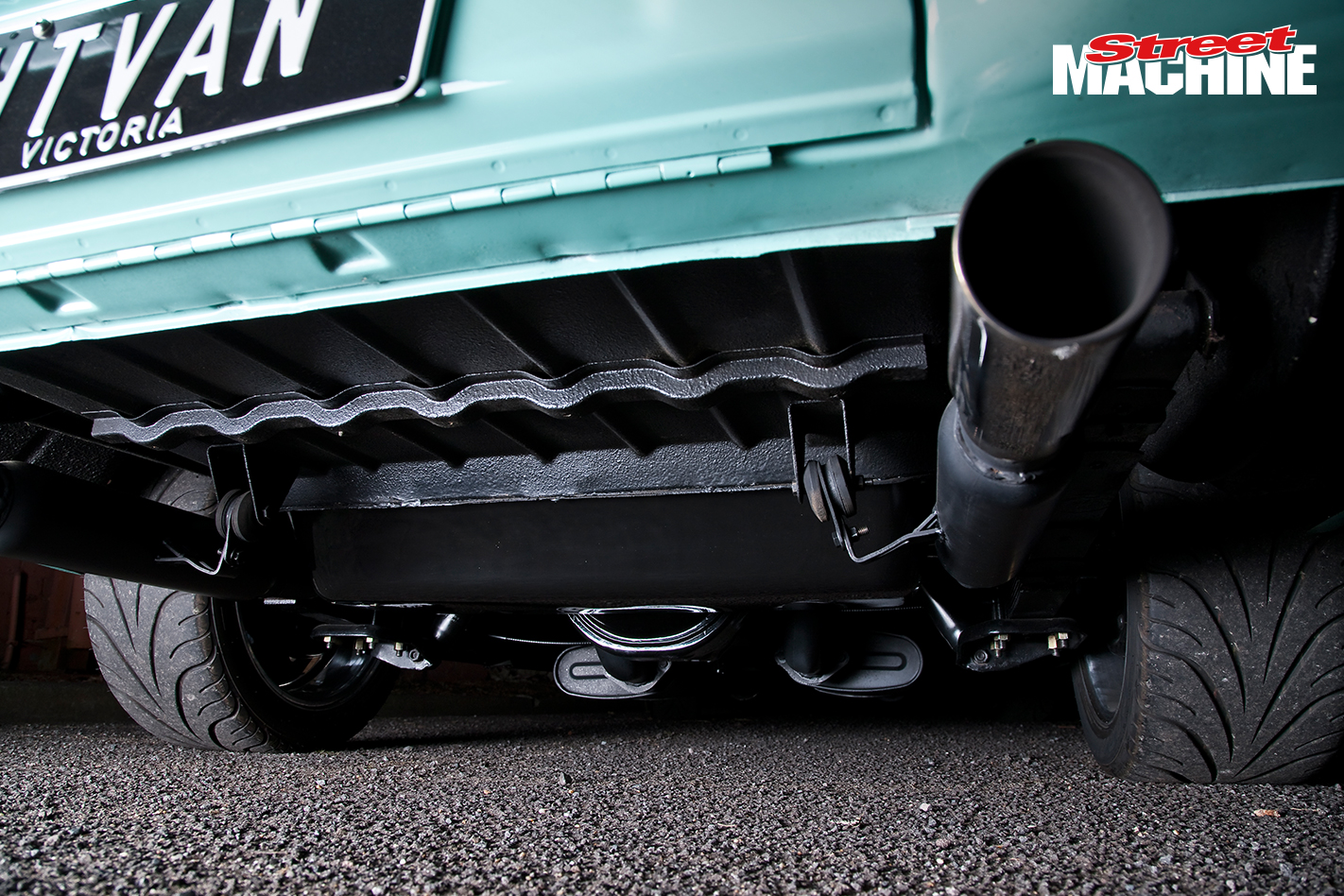 The tough and reliable theme continues down the driveline, with a Dominator 3000-stall converter fronting a Turbo 350 automatic fitted with heavy duty internals and a stage-two shift kit. A chrome-moly tailshaft connects to a nine-inch diff packed with goodies, including a Strange nodular iron case, Eaton Truetrac hemisphere running Richmond 3.89 gears, and 31-spline Dutchman alloy axles. In Chris’s shed, the HT came together pretty rapidly. With the new driveline completing the tidied engine bay and undercarriage, he turned his attention to the brakes, with HX front discs and HQ rear drums activated by a factory V8 master cylinder and booster. 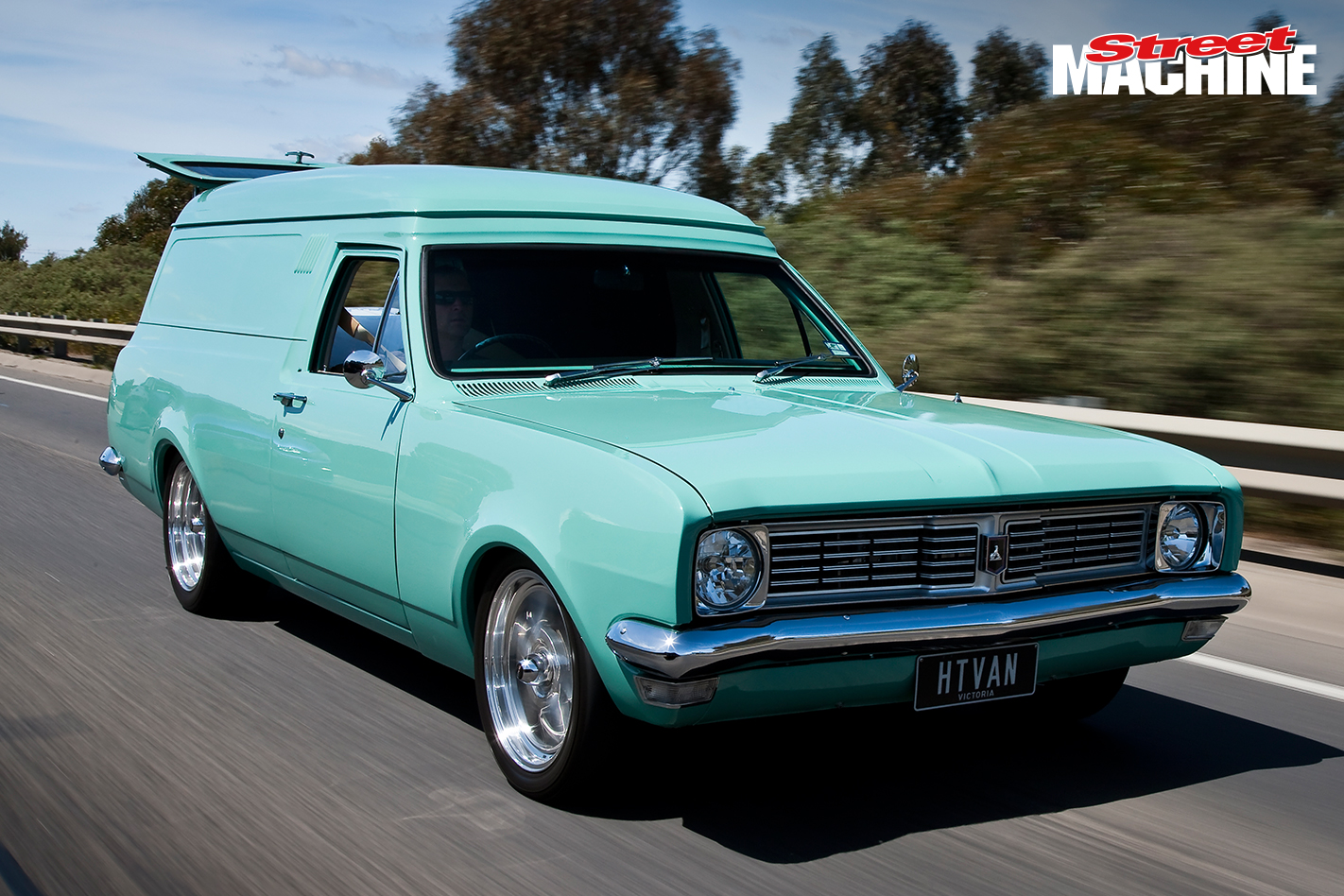 A healthy lowering job by way of King front coils and reconditioned rear leaves gets the van’s stance oh so right, while 17x7 and 17x8 Center Line Billet Competition Vintage rims fill the guards to perfection. 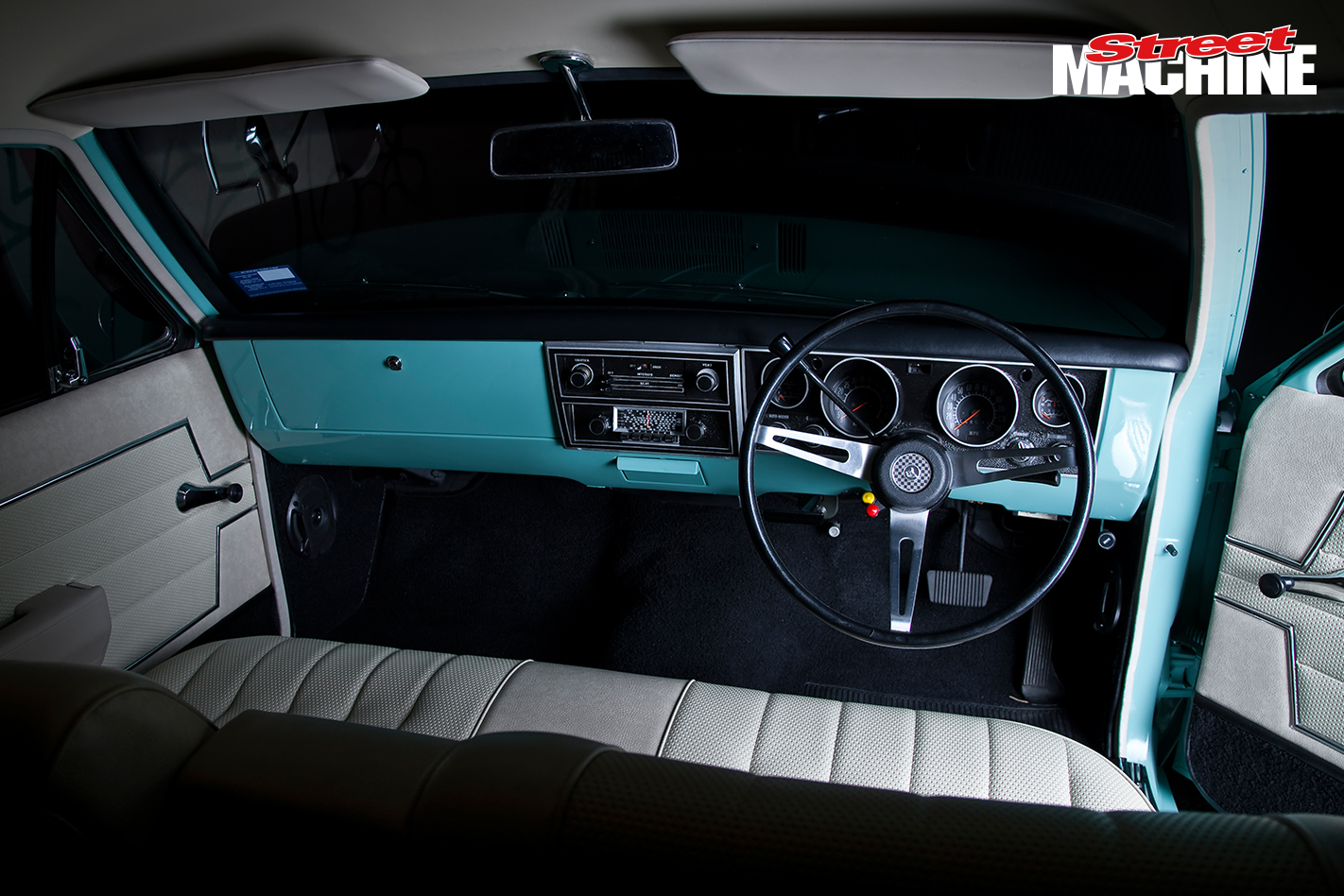 The interior is a mix of factory muscle and commercial appointments, an HT GTS steering wheel and sports dash sharing space with the stock bench and column auto. The bench was tweaked by C&N Vehicle Trimming in Sunshine, before being upholstered in Monaro-spec sandlewood trim to match new door cards. C&N also took care of the full-length headlining and black carpet, while a custom tailgate venetian is a neat touch. 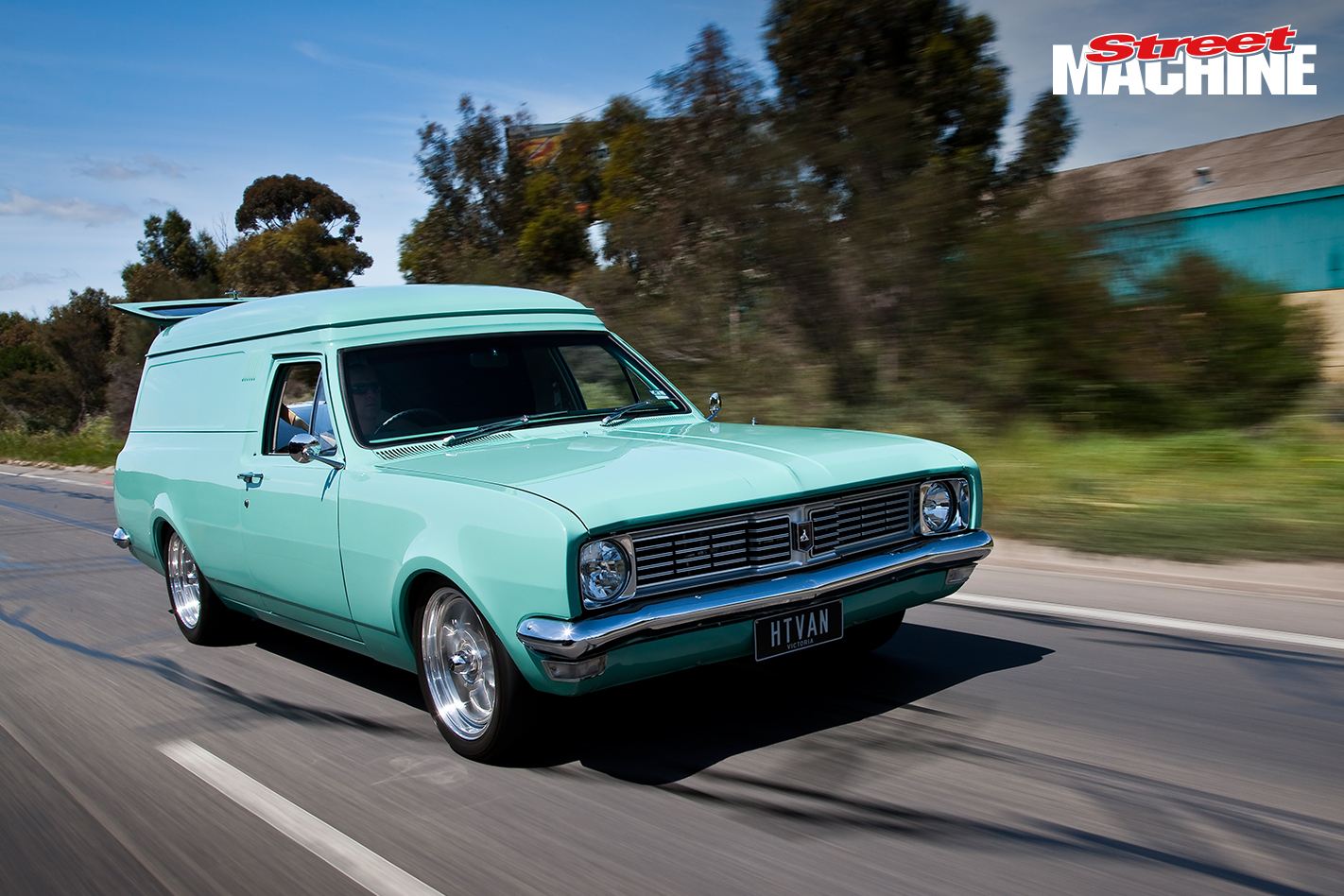 “It came together in about four months without any real hiccups. My better half, Jynese, and my mates were sure that I’d started a new full-time job in the garage but it was worth every minute as it turned out far better than I ever imagined.”

He didn’t waste any time hitting the shows and the HT won President’s Choice and Best Modified HK-HT-HG at the Geelong All Holden Day, and Top Street Machine at the Marsh Rodders 7th Show ’n’ Shine. 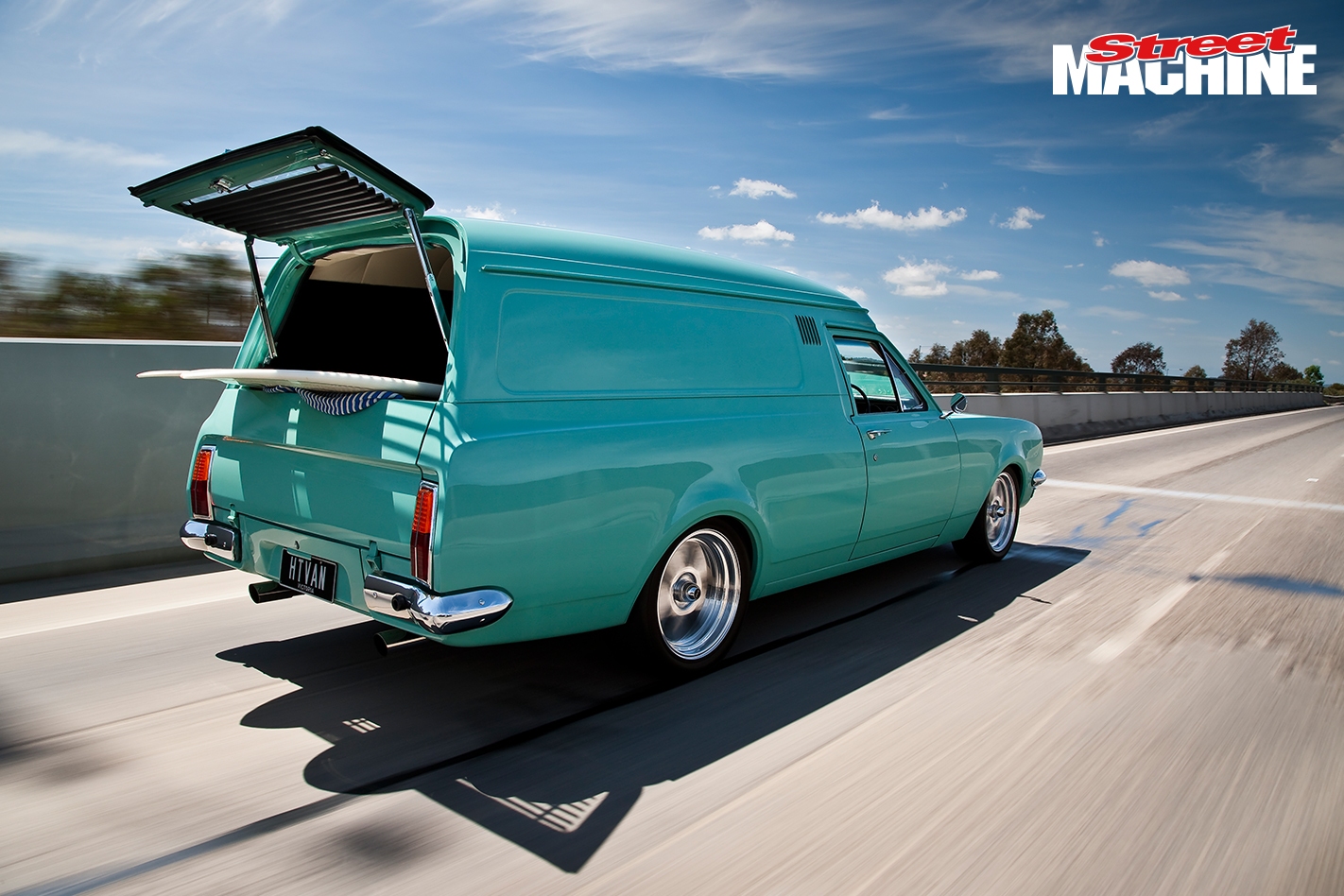 “With a couple of shows and trophies under its belt, it’s now time to get out and really enjoy the van. First up is some quarter-mile action just to see what it will do, so I’m planning on hitting Calder or Heathcote soon and letting it rip.”