THE CARS OF AUSSIE TV

Oodles of homegrown car action across 45 years of Aussie TV

A GOLDMINE for Aussie TV car aficionados, Matlock Police graduated from HG Monaros in its early black-and-white days through to Valiant sedans and Chargers over the course of its five-year run. The fictional town of Matlock was based on the size and population of Shepparton, and the constant string of bad guys were often behind the wheel of GT Falcons or hotted-up FJs and EHs. The pilot episode in 1971 was hugely popular due to its realistic storyline and a car chase where both a Falcon and pursuing police Monaro lose control and clean up trees; this action was actually the result of mistakes by the stunt drivers, but was left in for added impact. 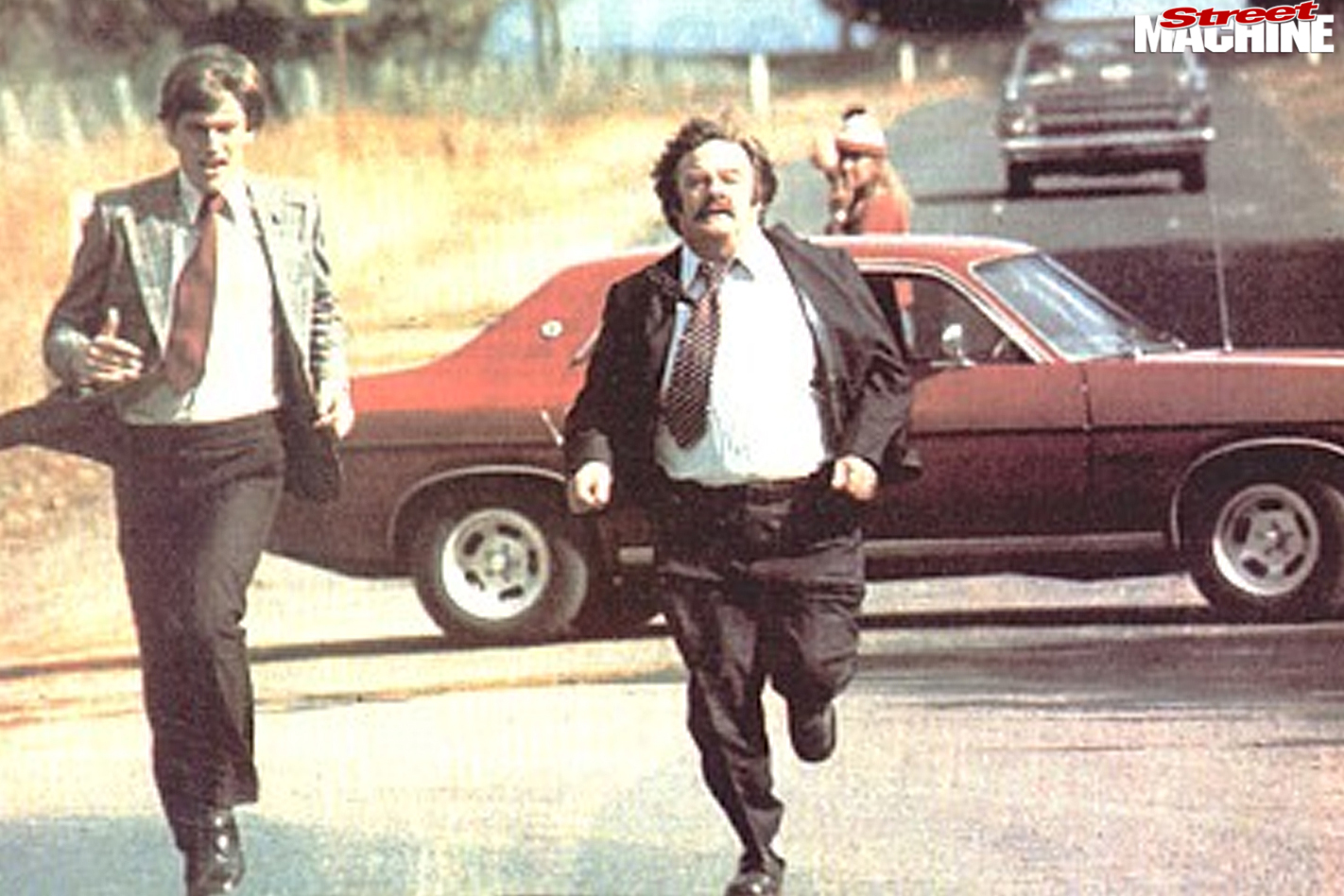 LUCKY Grills played the irrepressible detective Bluey in a time when political correctness were two words never used in the same sentence and the police was a force, not a service. Crawford Productions had a good deal going with Chrysler Australia, so the show featured some of the better Chrysler models, including VK Regals as undercover cars, regularly hard on the juice for body-rolling burnouts and handbrake slides. There are car chases aplenty, with Bluey and his crew in hot pursuit of Chargers, F250s, Bedford vans and even Rovers! Interestingly, as Chrysler didn’t build panel vans until the CL range, Crawfords requested a custom-made divvy van that was a VJ ute sporting a full Holden pano roof. It gets plenty of screen time in Bluey, but was later destroyed when used as a baddies’ van in The Flying Doctors. In 1993 ABC’s The Late Show featured a weekly send-up called Bargearse – clips from Bluey overdubbed for comic effect. It introduced the show to a new audience thanks to plenty of fat and fart jokes – or this ripper:
“Can I take your order please?”
“Chips.”
“Do you want fries with that?” 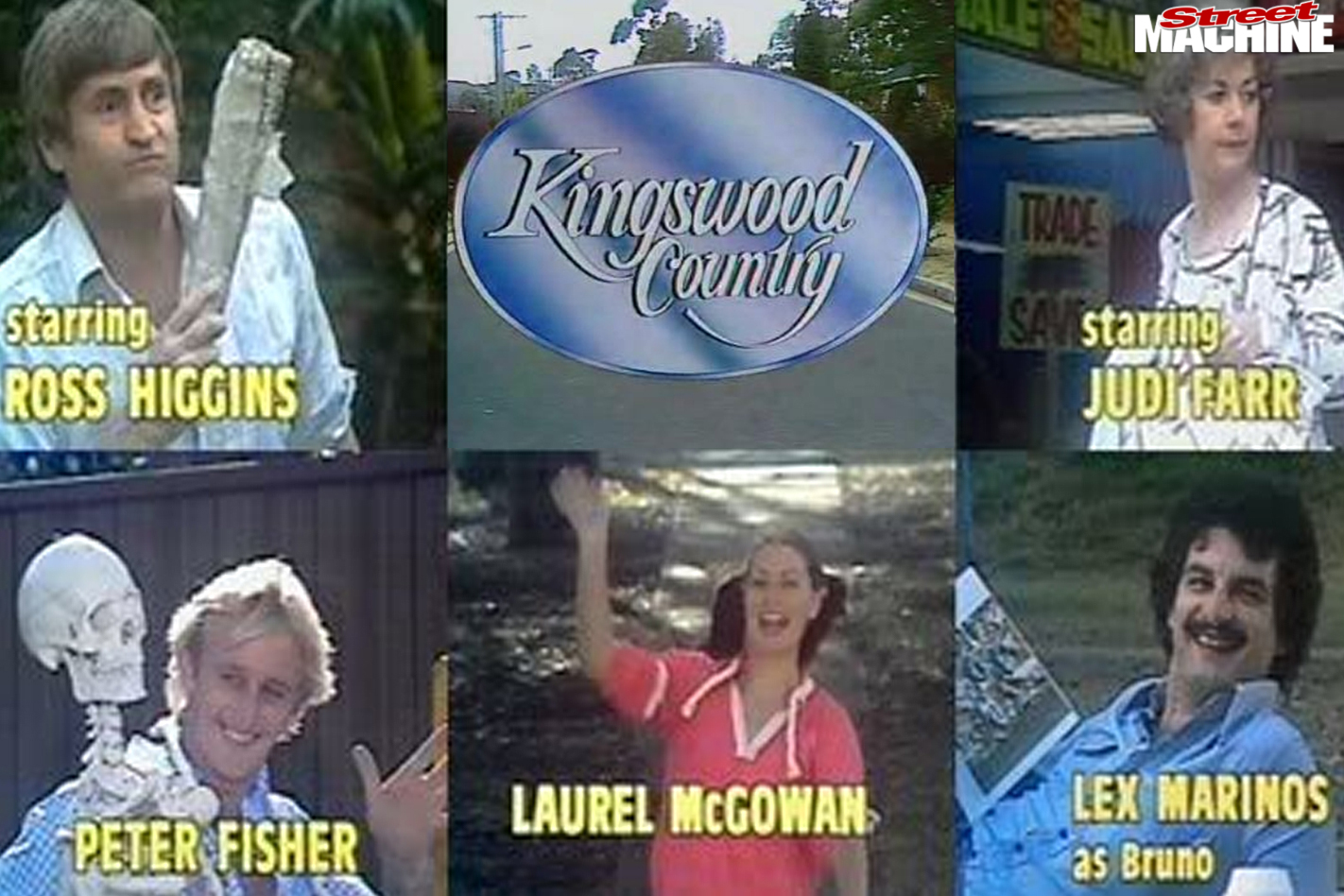 PROBABLY the most famous but never seen Aussie TV car, Ted Bullpitt’s Kingswood was a regular script inclusion in this sitcom, along with son-in-law Bruno’s purple Valiant and brother Bob the Datsun dealer. Ted’s blurted “You’re not taking the Kingswood!” became a catchcry for every 80s schoolkid whenever one of Holden’s finest would roll by. Kingswood Country ran for four years, but had a drawn-out demise after Judi Farr, who played Ted’s wife Thelma, left the show in its third season due to a contractual dispute. She was replaced with Sheila Kennelly, whose portrayal of Bruno’s mum Rosa became a full-time character as a live-in cleaner for the bigoted Ted while Thelma was ‘on a cruise’. The final nail in the coffin was when the Kingswood was sold and replaced with a Commodore in an effort to modernise the series.

SADLY forgotten by most, Kings was a drama about a working-class family from suburban Sydney and the goings-on at their panel shop. With the sons all being knockabout blokes, the shop’s Holden tow truck would often be dropping burnouts, or there’d be some high-speed motorcycle action, and the show’s early-80s production guaranteed streets full of now-classics. It was hard not to have a schoolboy crush on spunky Arkie Whiteley – daughter of artist Brett – better remembered as her role as the Captain’s girl in Mad Max 2. Kings’ all-too-short 19-episode run ended with family patriarch George (Skippy’s Ed Devereaux) dying in his favourite chair. 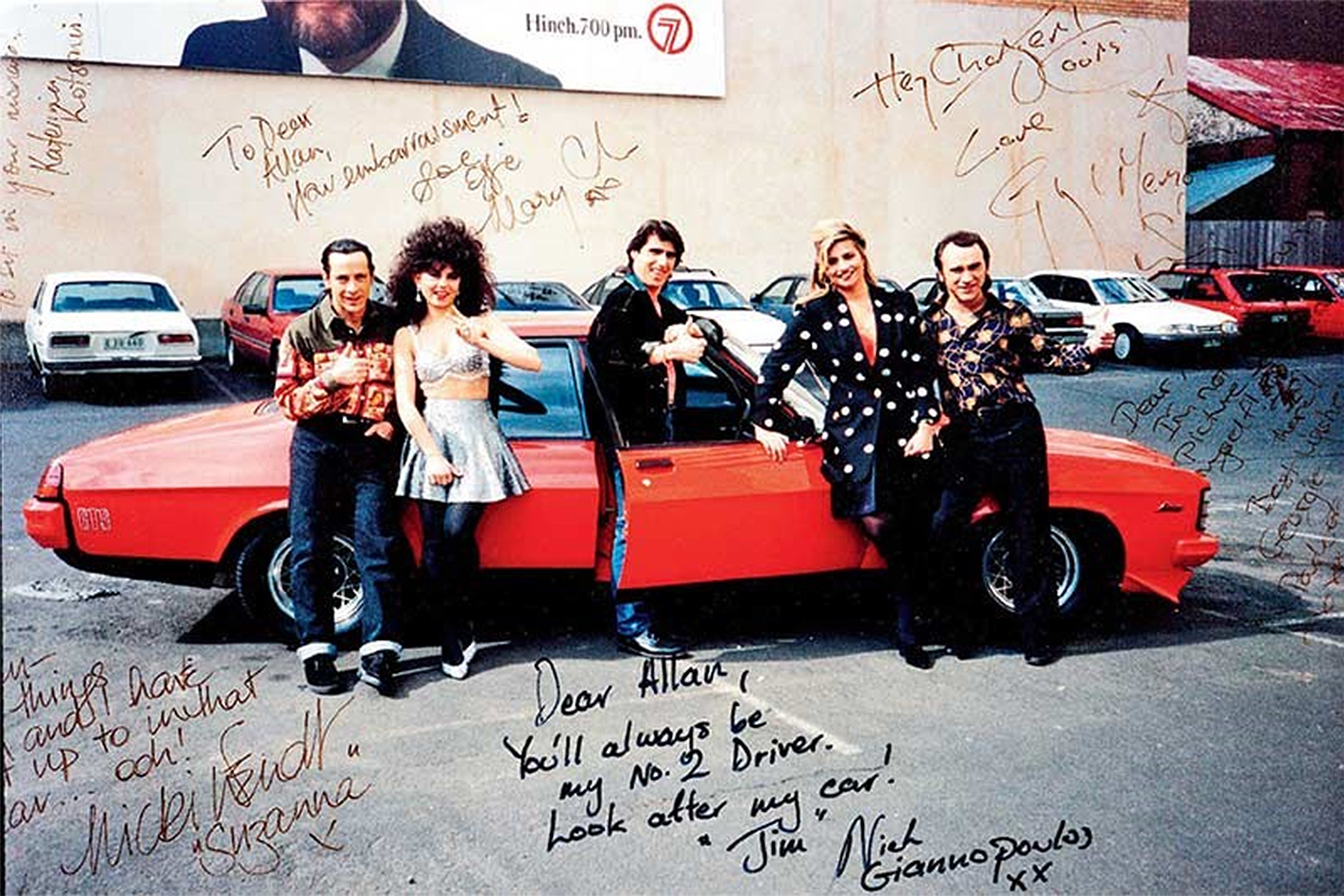 AUSTRALIANS of ethnic heritage do cultural humour better than most, and will happily take the piss out of themselves for a laugh. Such is the case in Acropolis Now, featuring Nick Giannopoulos and his Wogs Out Of Work team and set in a Greek café where the activities and personalities of the staff push the Greek stereotype to the nth degree. Talk of Monaros and Valiants sporting fluffy dice and mags is on the money, while Giannopoulos’s character Jim earns legit street cred with his hotwire-clad Mandarin Red GTS sedan. The show can also lay claim to popularising the term ‘Skippy’ in the Aussie vernacular, as a slang term for Anglo-Australians. 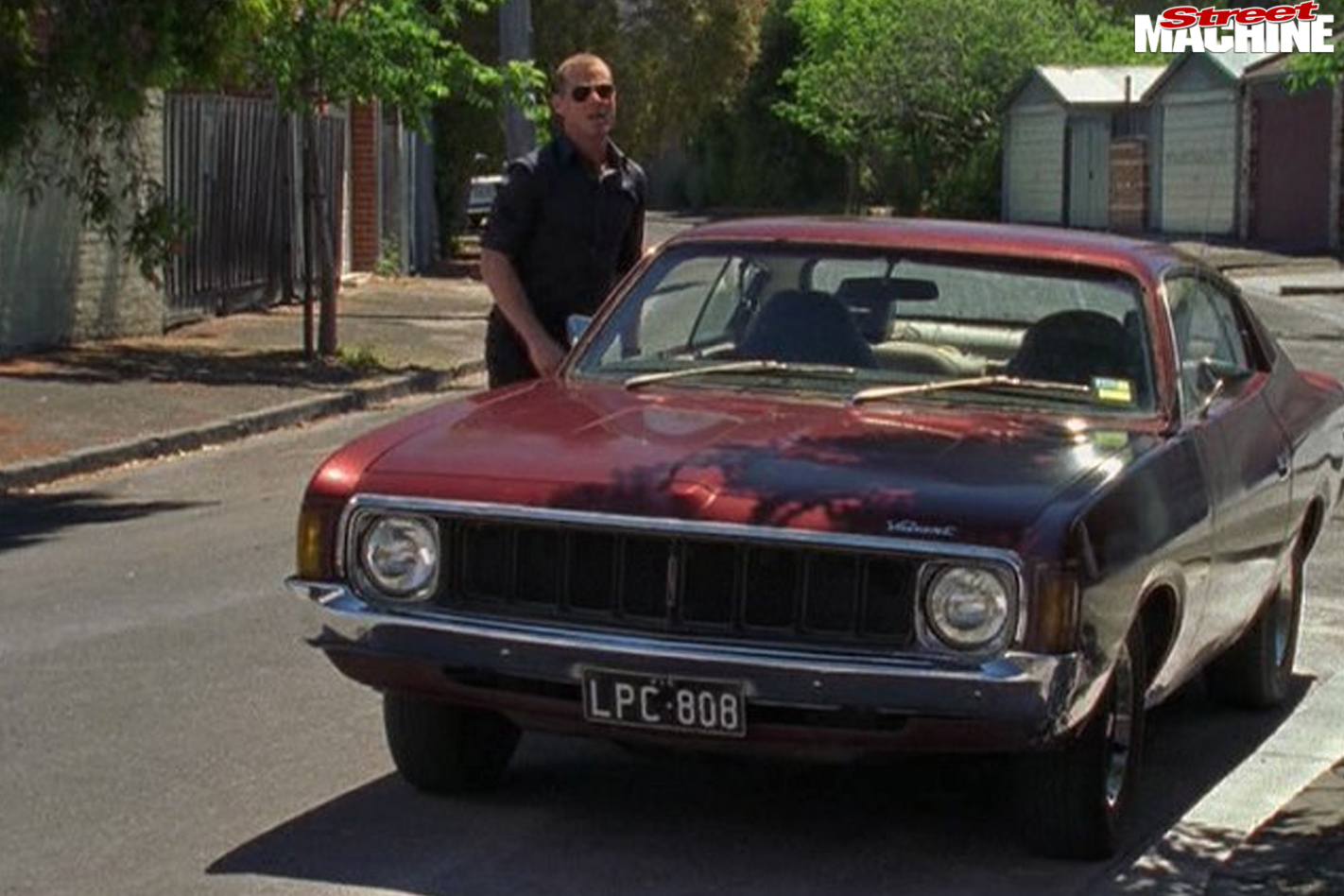 THIS show featured Marcus Graham playing ex-cop Elvis Maginnis, who was born into a criminal family but joined the force to keep on the straight and narrow. However, since leaving the police and buying a dry cleaning business, he struggles to keep on the right side of the law as his local reputation sees him drawn into a number of misadventures. His VJ Charger became a centrepiece for the show, and when it was torched in the final series it was like the death of a cast member. 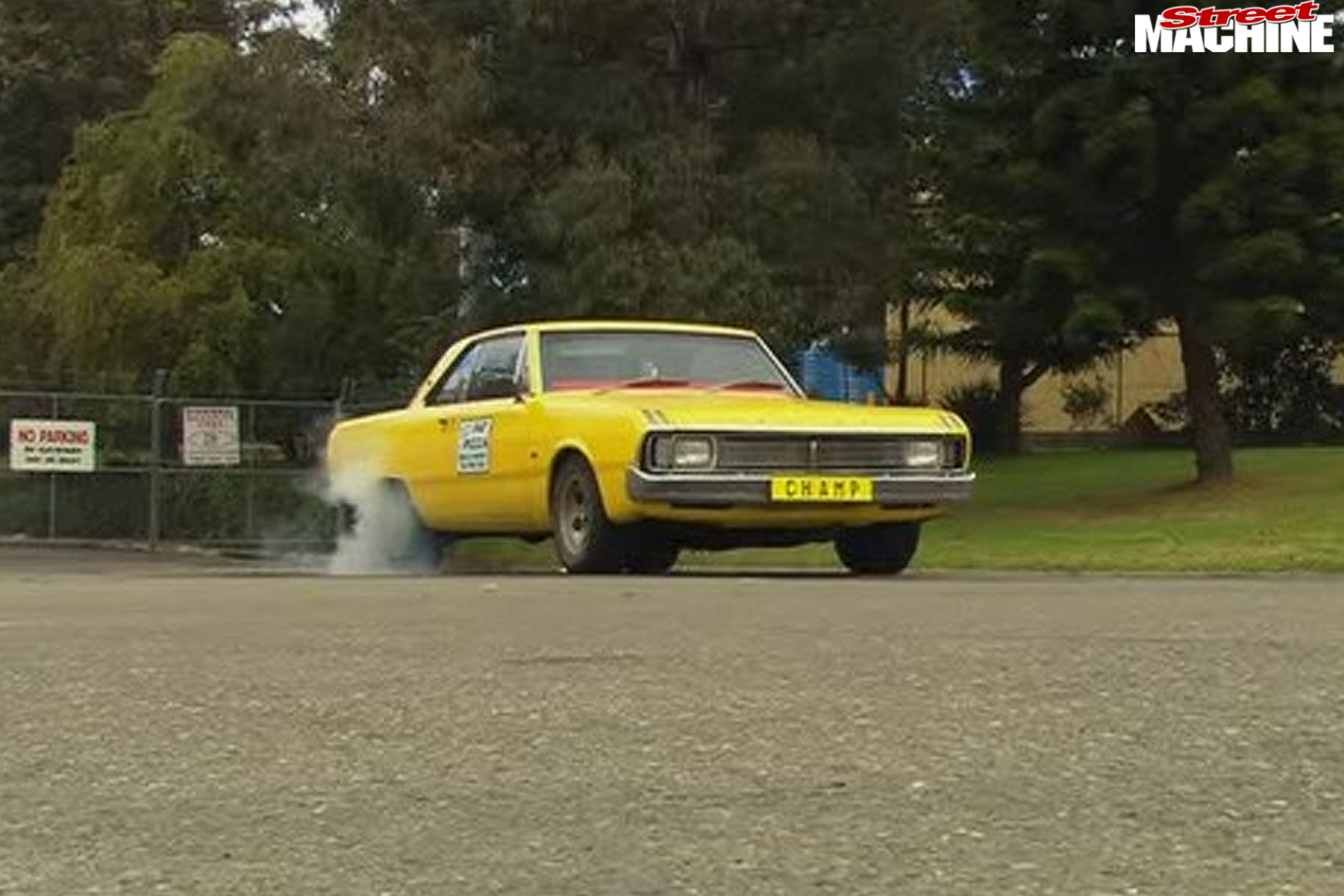 THE series that put Paul Fenech and his crew on the map. The core of Fat Pizza’s delivery fleet was a yellow VG Valiant hardtop, which would blaze its open diff with ease, and as well as scooters running full-width rear wings. But the crowning glory for Pizza’s car action was a young Pauly failing his driving test with Elliott Goblet – the PAC Performance RX-3 pulls a monster back-street burnout in lieu of a three-point turn. 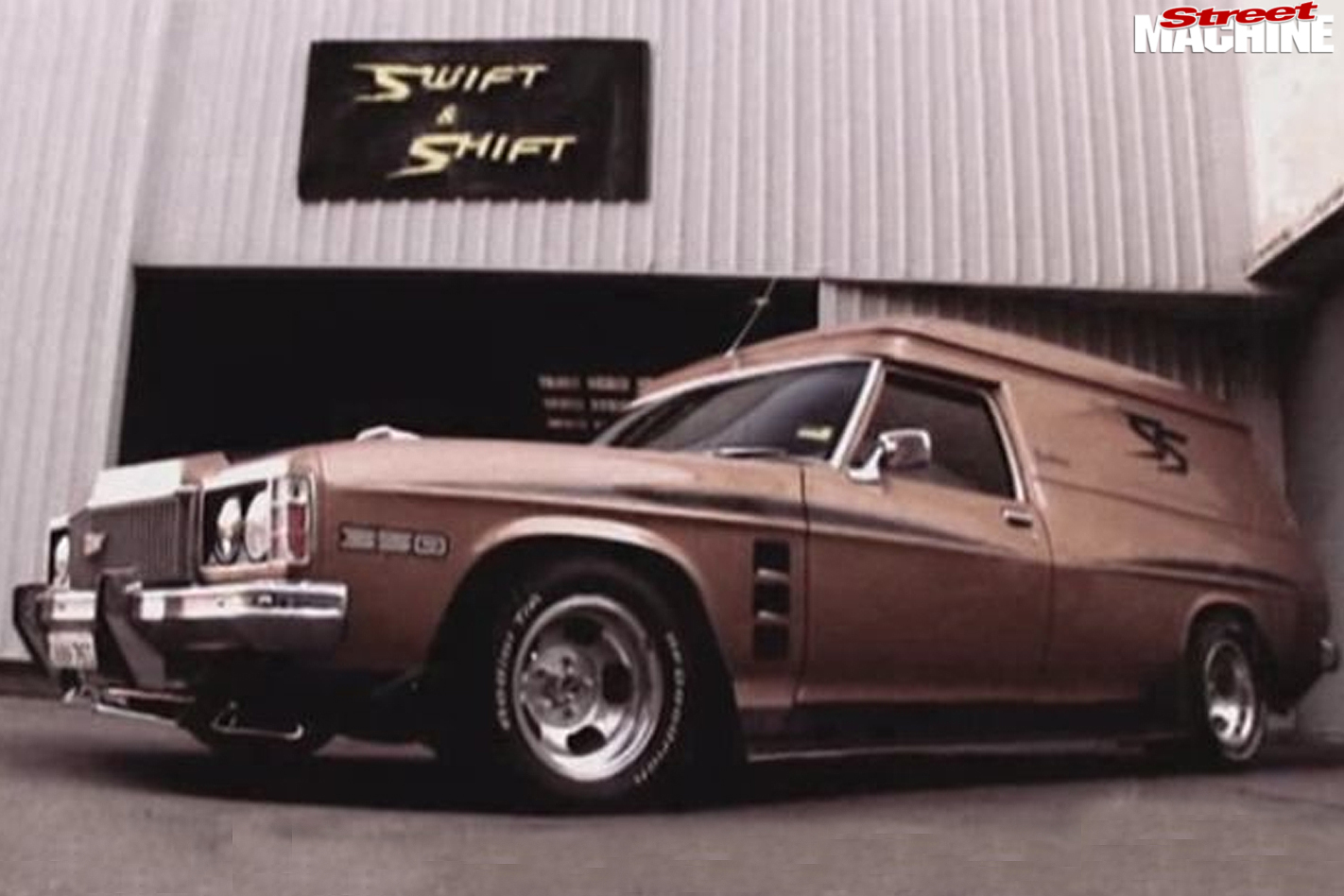 PIZZA’S Paul Fenech returned to the fictional Sydney suburb of Hashfield for another round of misfit action, this time based around the daily grind of an unconventional courier company. The white van antics come thick and fast, and Paul’s blingin’ Ford Econovan is a cracker. But the flashback to courier days in the 70s takes the cake, with Scott Barter’s gold Sandman strutting its stuff. 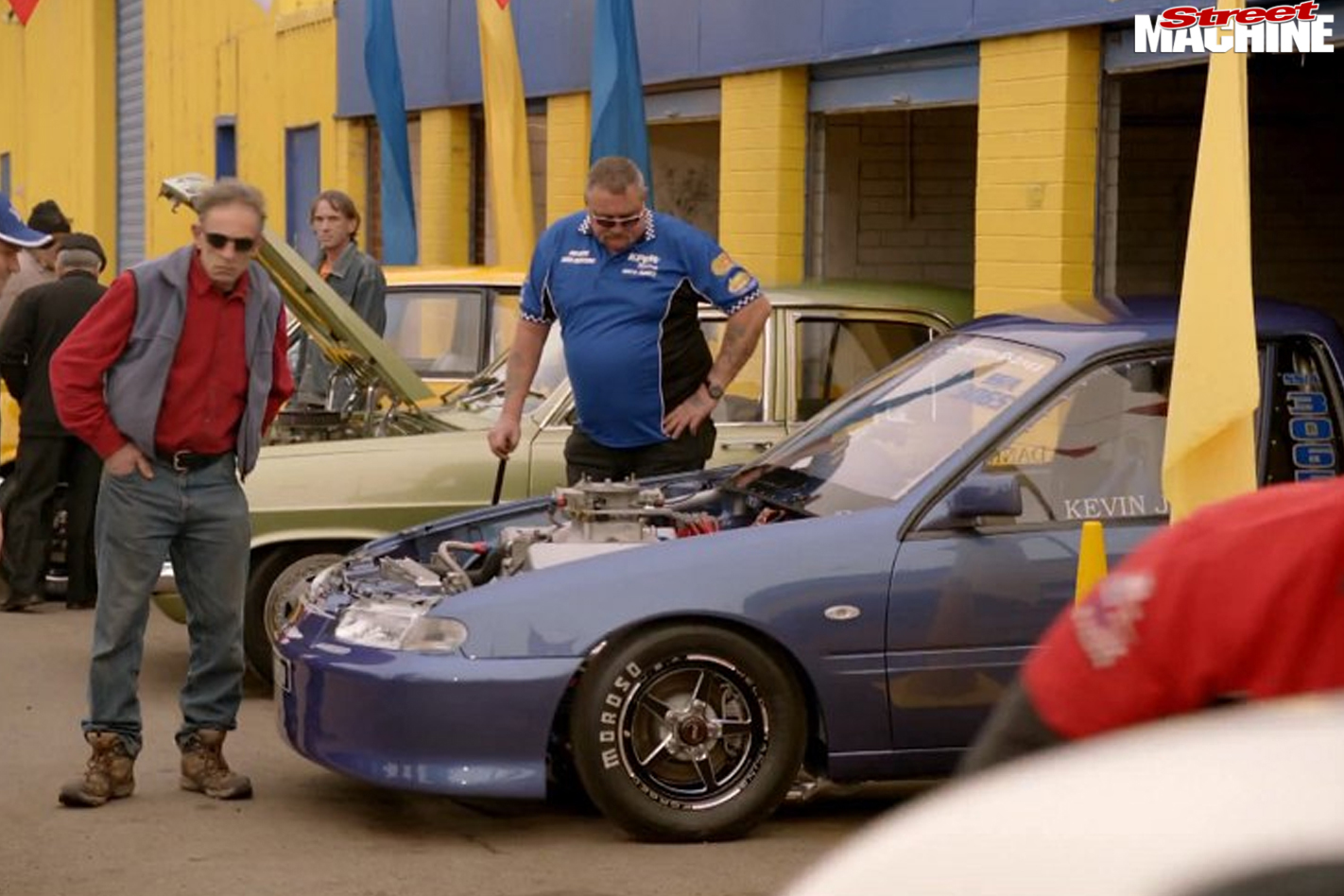 WHEN the word ‘bogan’ forms part of a show’s title, it’s easy to picture a V6 Commodore manging out a peglegging skid. But the premise of an upper-class girl, Bess, learning she was adopted from the outer suburbs hints that this sitcom offers a refreshing break from that stereotype. Her reconnection with the drag racing Wheeler family is well scripted and includes plenty of professional-level race footage from Calder Park, ranging from tough streeters to Top Fuellers, with some classic daily iron thrown in for good measure. A quality cast including Glenn Robbins and Annie Maynard is outshone by Michala Banas’s portrayal of the foul-mouthed Amber – she nails it!