TOUGH cars are an addiction, and it’s one the Younis family is heavily afflicted with. Tony Younis is a grandfather these days, so he’s probably old enough to know better, but his stable includes a ProCharged small-block LX hatchback and a wild eight-second Anglia, both of which are as black as the ace of spades. 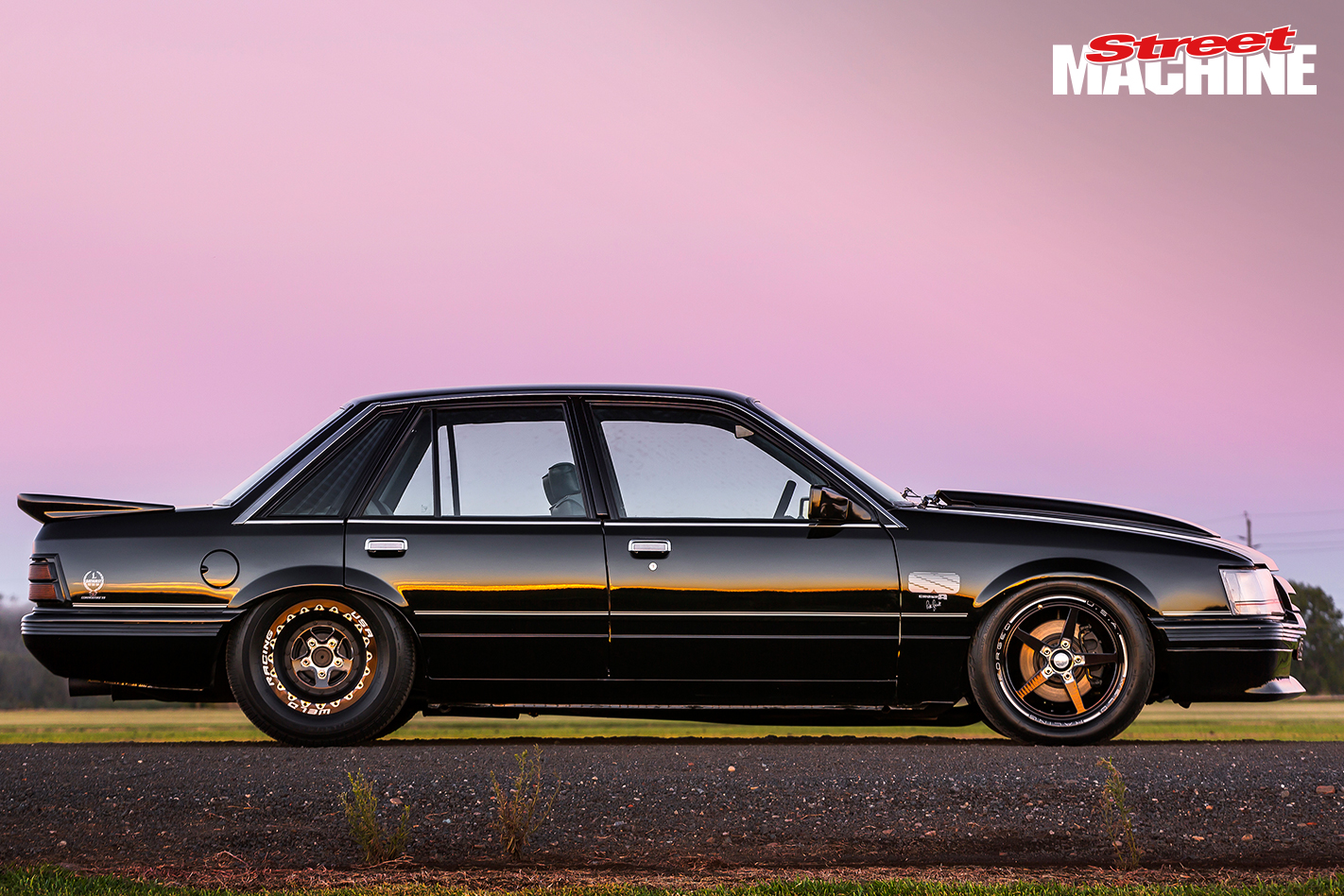 Tony’s youngest son Danny is busily forging a reputation as one of the rising stars of the skid scene in his FUKYEA Capri (SM, Dec ’14), and his eldest son Louis also has an impressive toy collection, including a blown and tubbed red six-powered LC GTR (SM, Apr ’12), an eight-second small-block LJ coupe, and – until recently – a blown ’57 Chev. 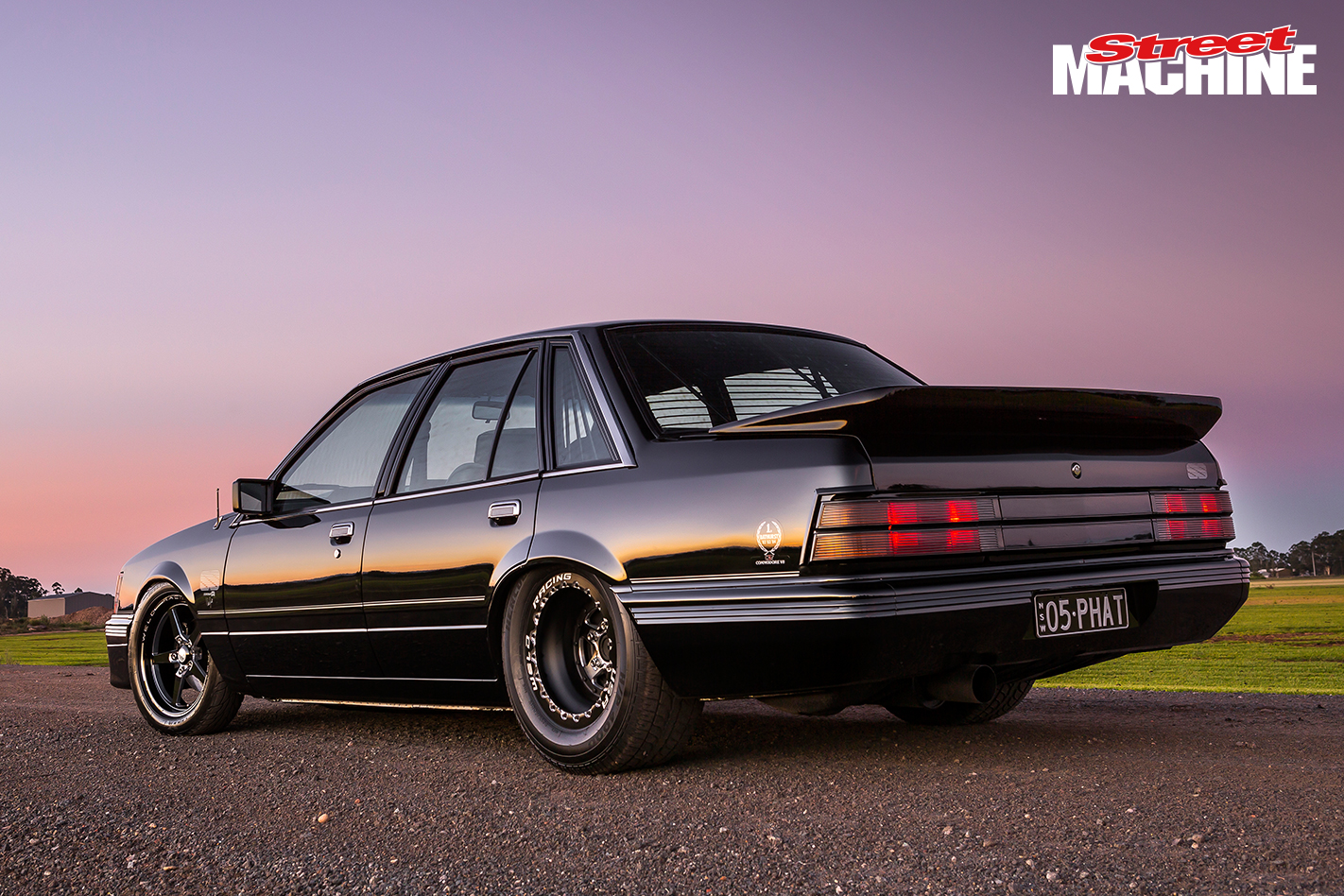 Having a shed full of mental street cars sounds all well and good in theory, but when your family quickly expands to include two kids under two, your priorities begin to shift from blowers and tubs to child seat anchor points and air conditioning. And while Louis had no shortage of staunch streeters in his arsenal, not one of them was even remotely suitable for practical and reliable family motoring. 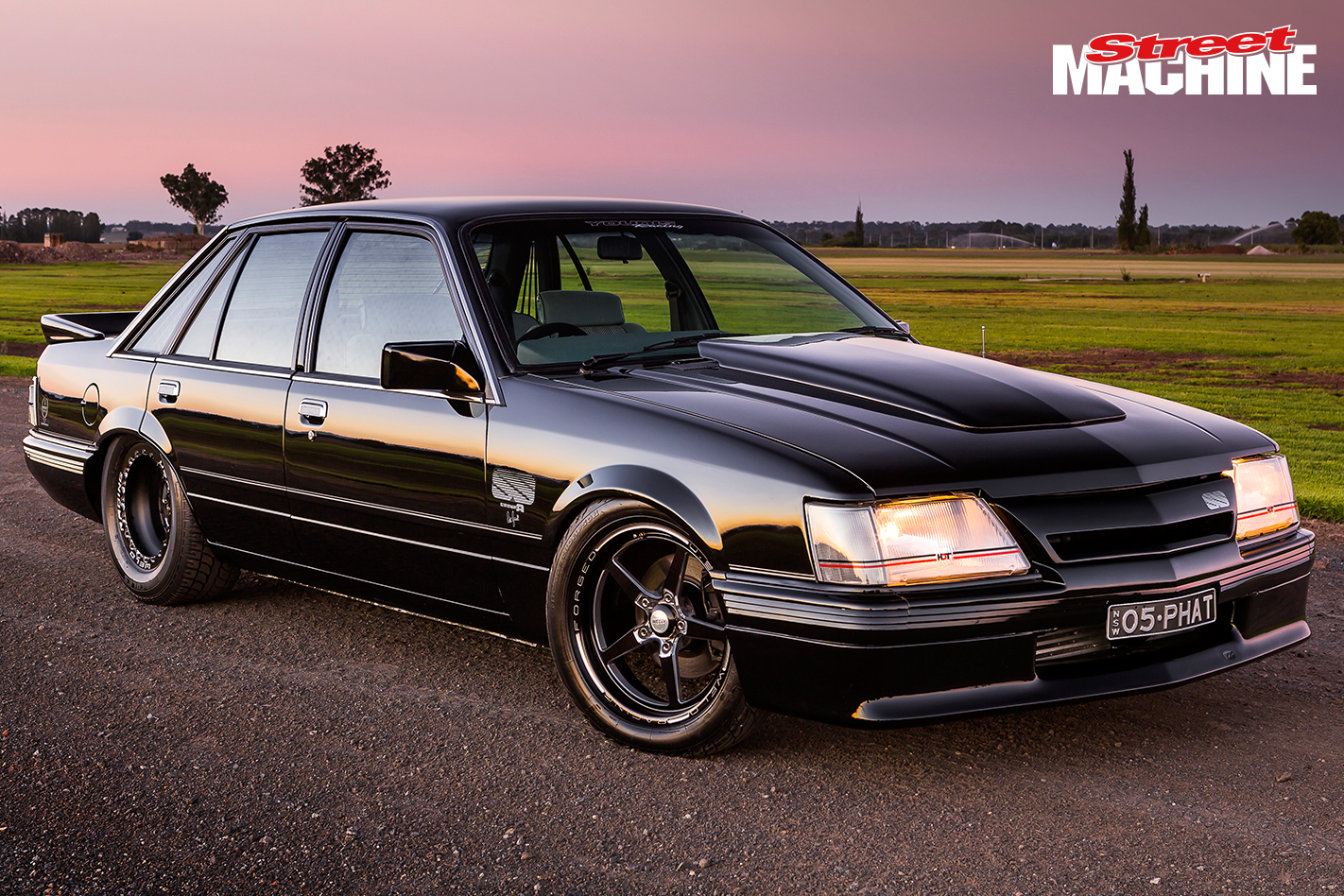 “This car was built with family in mind,” Louis says. “It had to be safe and simple, with a standard fuel tank to allow for plenty of boot space. It had to have power steering, air con, standard seats and seatbelts, and a full exhaust with two mufflers.” 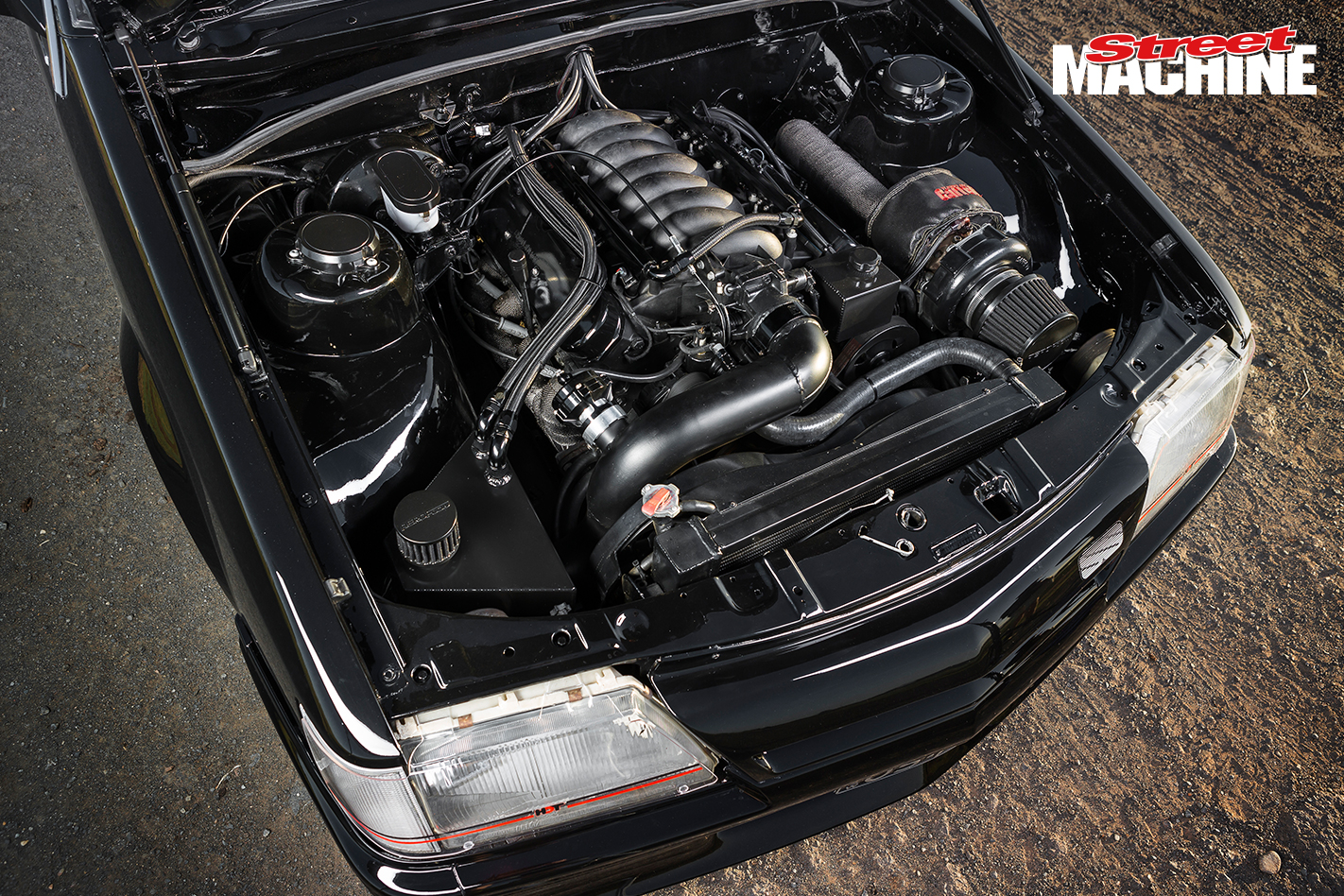 When he bought the car it had already been treated to an LS1 swap, backed by a T56 six-speed and nine-inch. It was a half-respectable little streeter, but the Tiger Mica paint, P-plate-special chromies and poverty-pack interior were not to Louis’s tastes. He sent the car to Pauly Abela at Pauly’s Restorations, who massaged the body and layered it in the traditional Younis Racing Black, before forwarding it on to Snap-On Apprentice of the Year winner, Wayne Grima at Grima’s Garage. 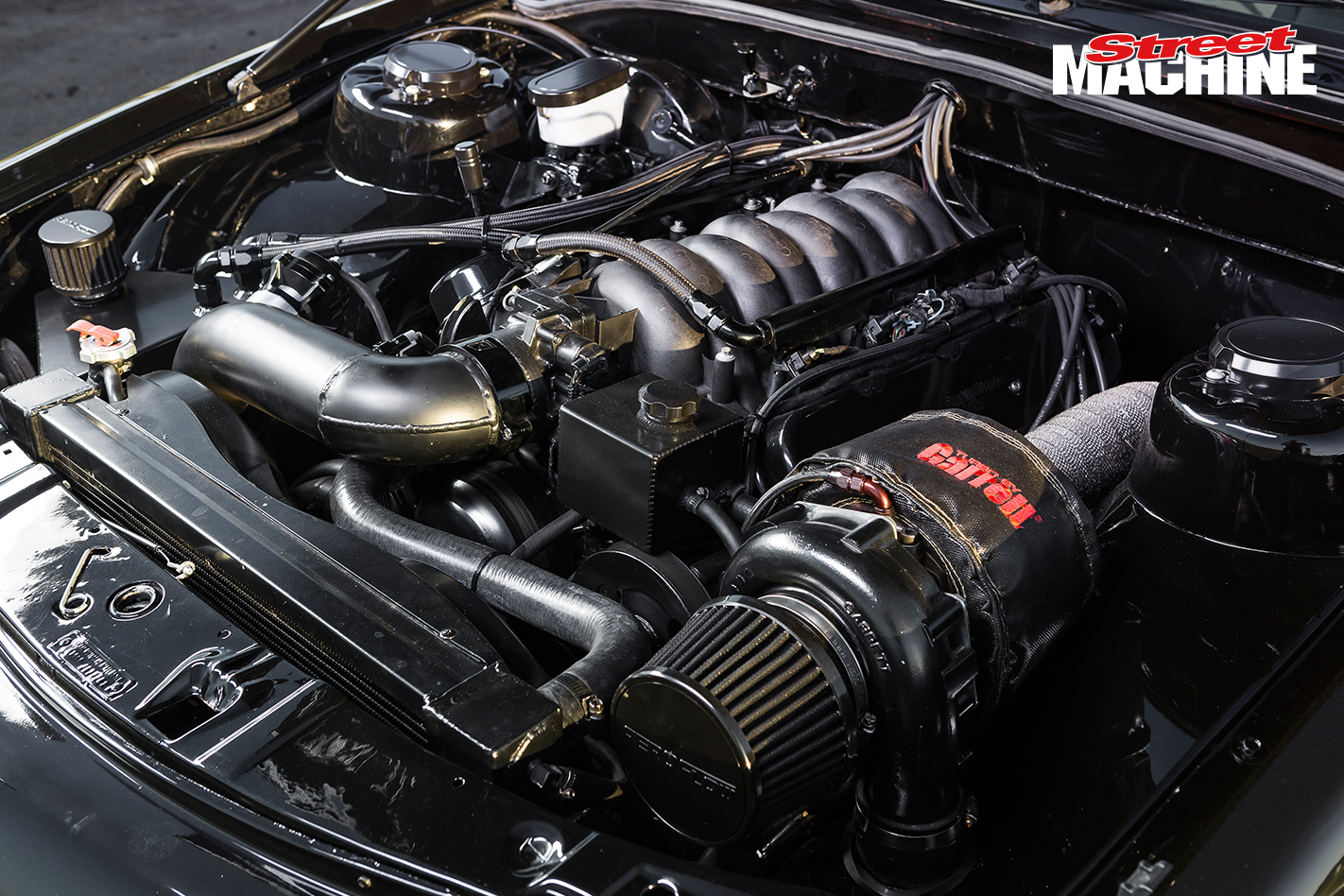 Wayne’s a great mechanic, but a bad influence, and we mean that in the best possible way! “The original plan was to throw a set of 19-inch Aeros on it and have Wayne give it a once-over and get the stance right,” Louis explains. “We were going to leave it with the aspo LS1 and six-speed. But the car came with a shortened nine-inch and a turbo kit. Wayne had some spare 15x8 Weld wheels and we sat one under it. He said: ‘Louie, this is more your style.’ He suggested going with a pro street theme and a Brocky replica look.” 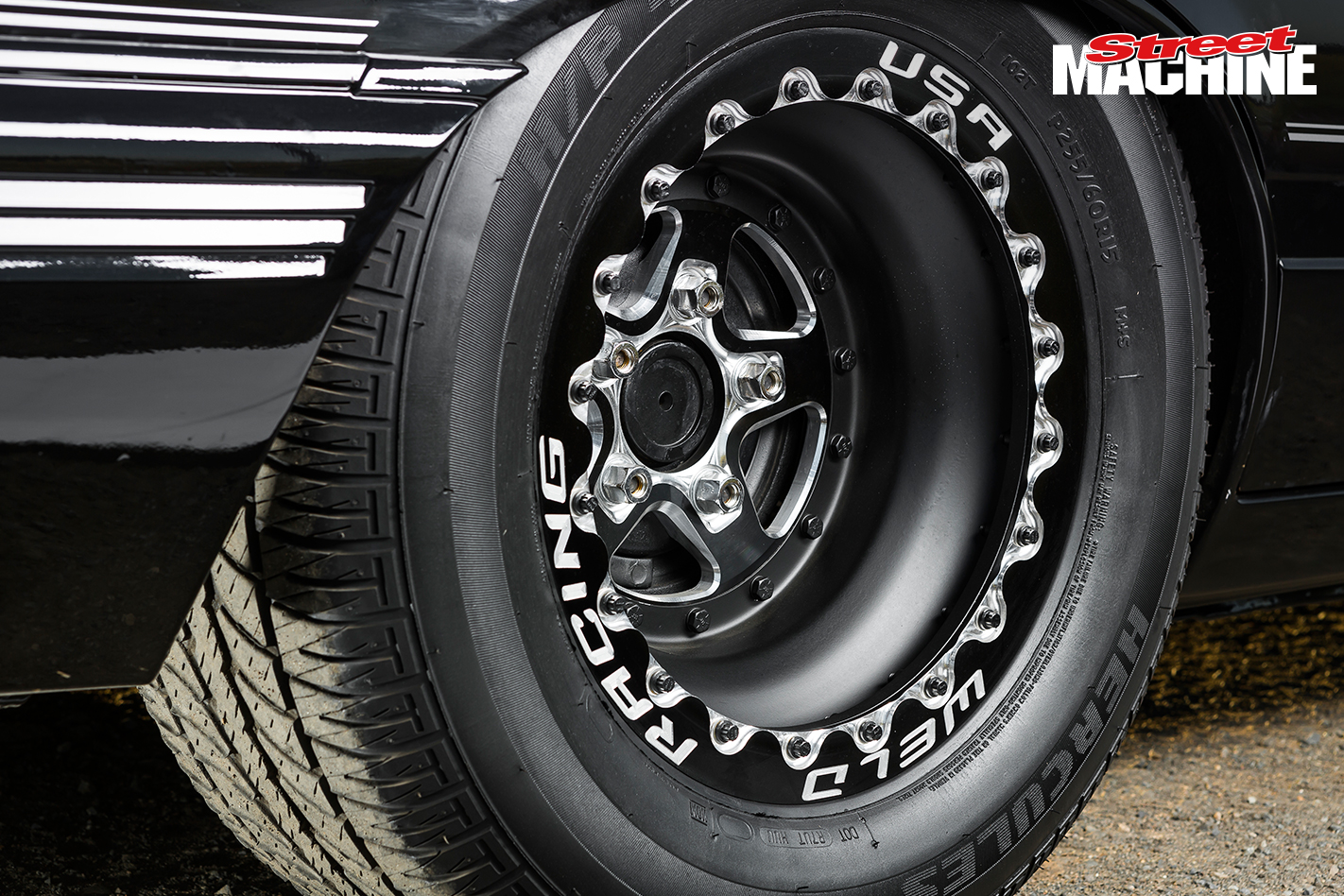 Before you know it, the supplied nine-inch was being further shortened to suit the Welds, and a set of tubular trailing arms and coil-overs were being installed. Next up, the T56, tailshaft and the other nine-inch were sold off to bankroll a transbraked Powerglide and Dominator converter. 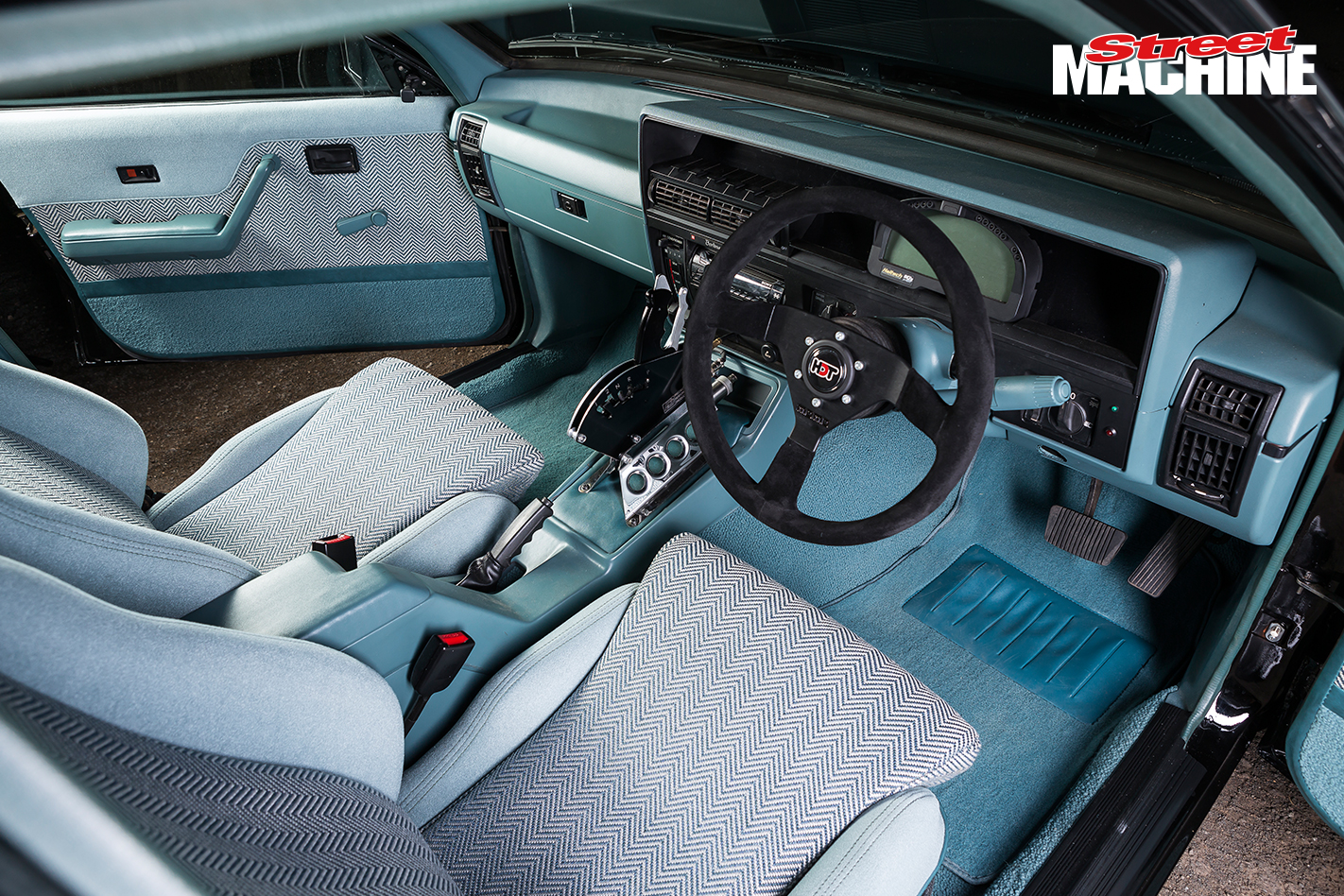 “Then Wayne said: ‘This turbo kit is here, what do you want to do?’” Louis laughs. “We pieced it together and it was missing a bunch of stuff, but we were in too deep so I just kept pouring money into it. At least the turbo turned out to be a ball-bearing Garrett GT42, so that was a win.” 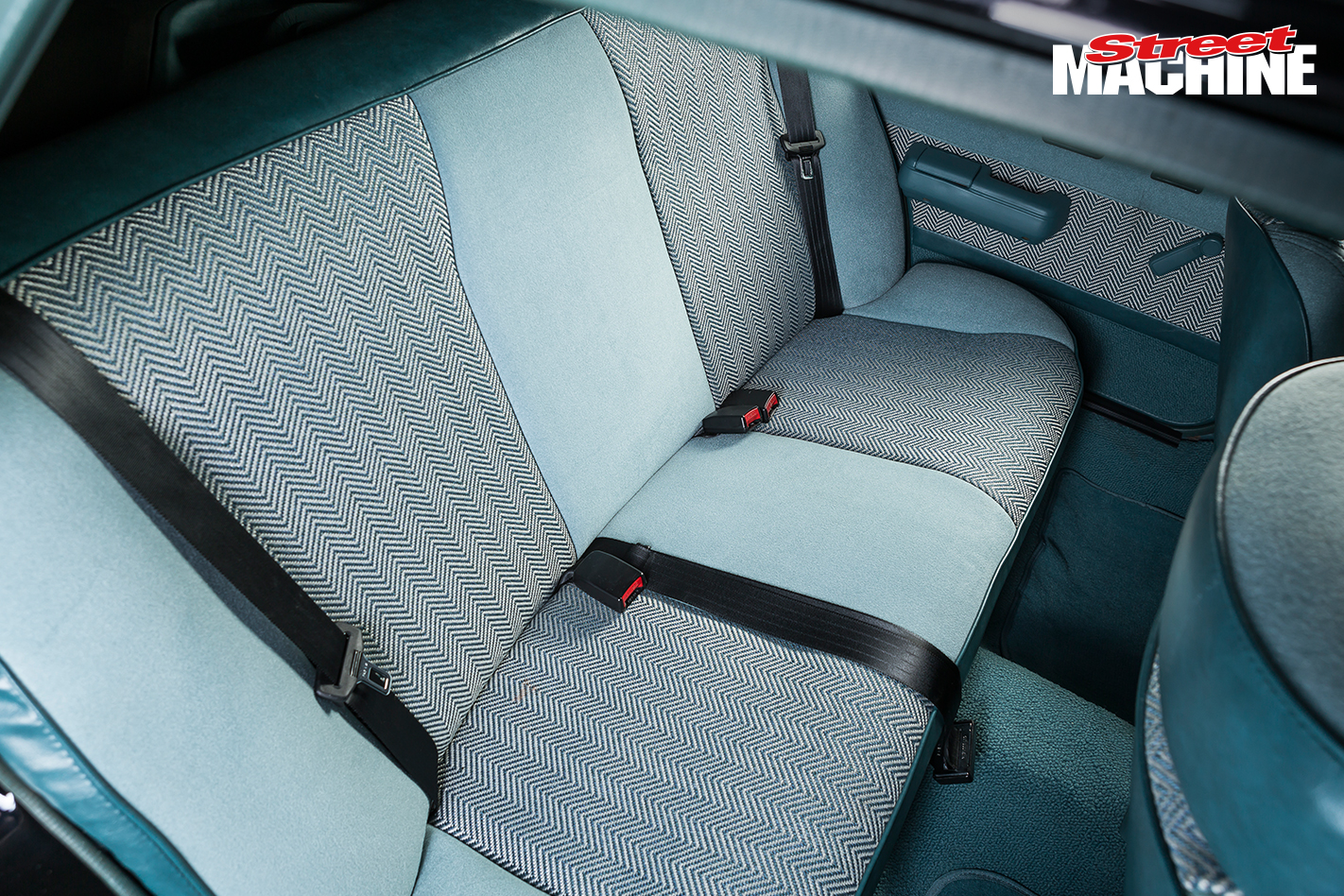 The engine itself is a bone-stock LS1 with a set of aftermarket injectors and valve springs, and it’s controlled by a factory VT Commodore ECU that’s been tweaked to suit by Luki at LS Autoworks. Even the fuel system is basic – a stock VL lift pump feeding a surge tank, with a Bosch 044 main pump. Louis estimates that the modest combo is good for somewhere in the neighbourhood of 500rwhp on pump fuel, and he’s looking to fetch nine-second quarters out of the car on 255 radials with the baby seats in the back. 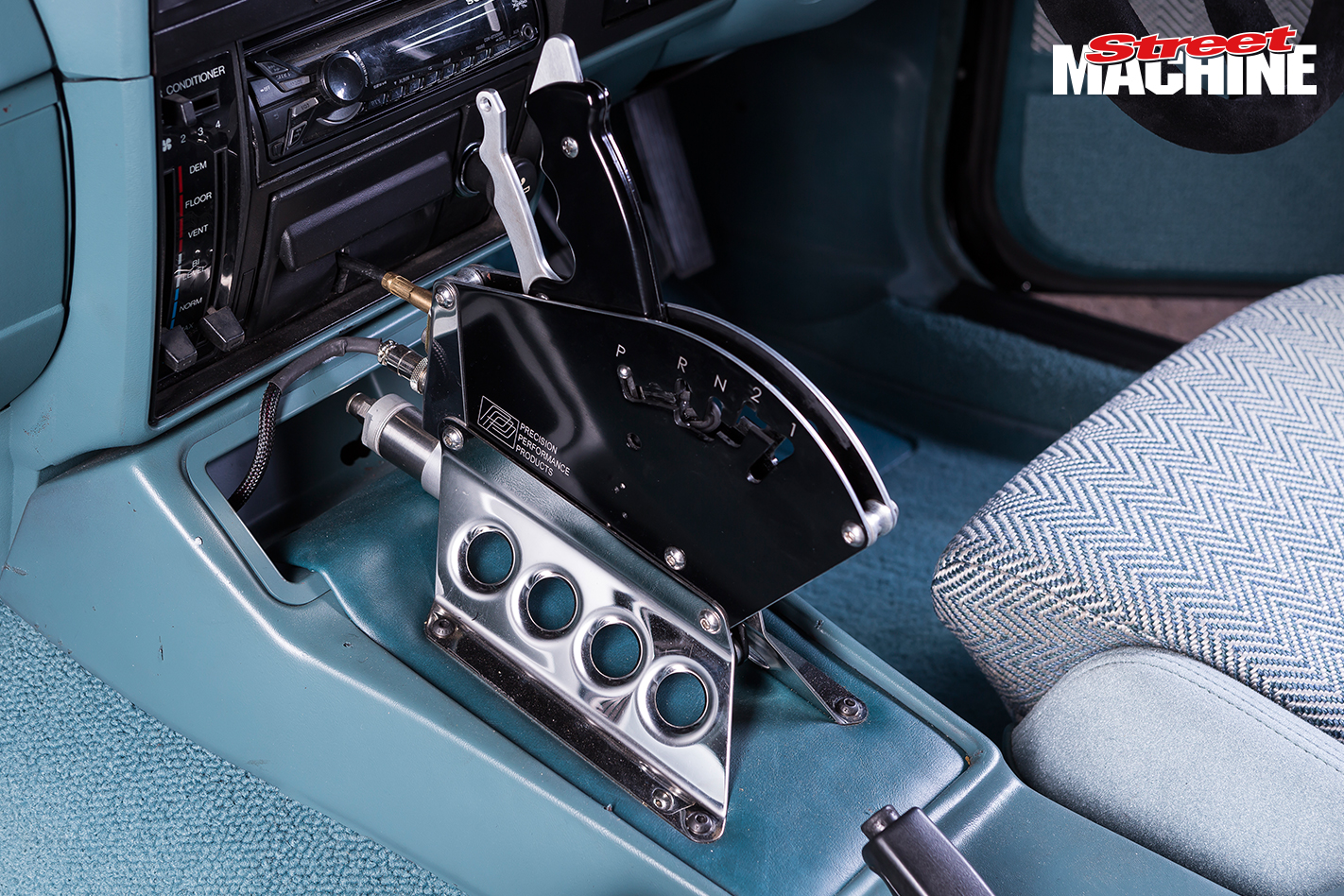 As the finishing touches on the VK came together, the snowballing continued, and the ’57 Chev was sold off to make room in the shed. The Welds that Louis first had fitted were removed in favour of beadlock-equipped rears and 17-inch fronts, which necessitated the switch to a set of coil-over front shocks. 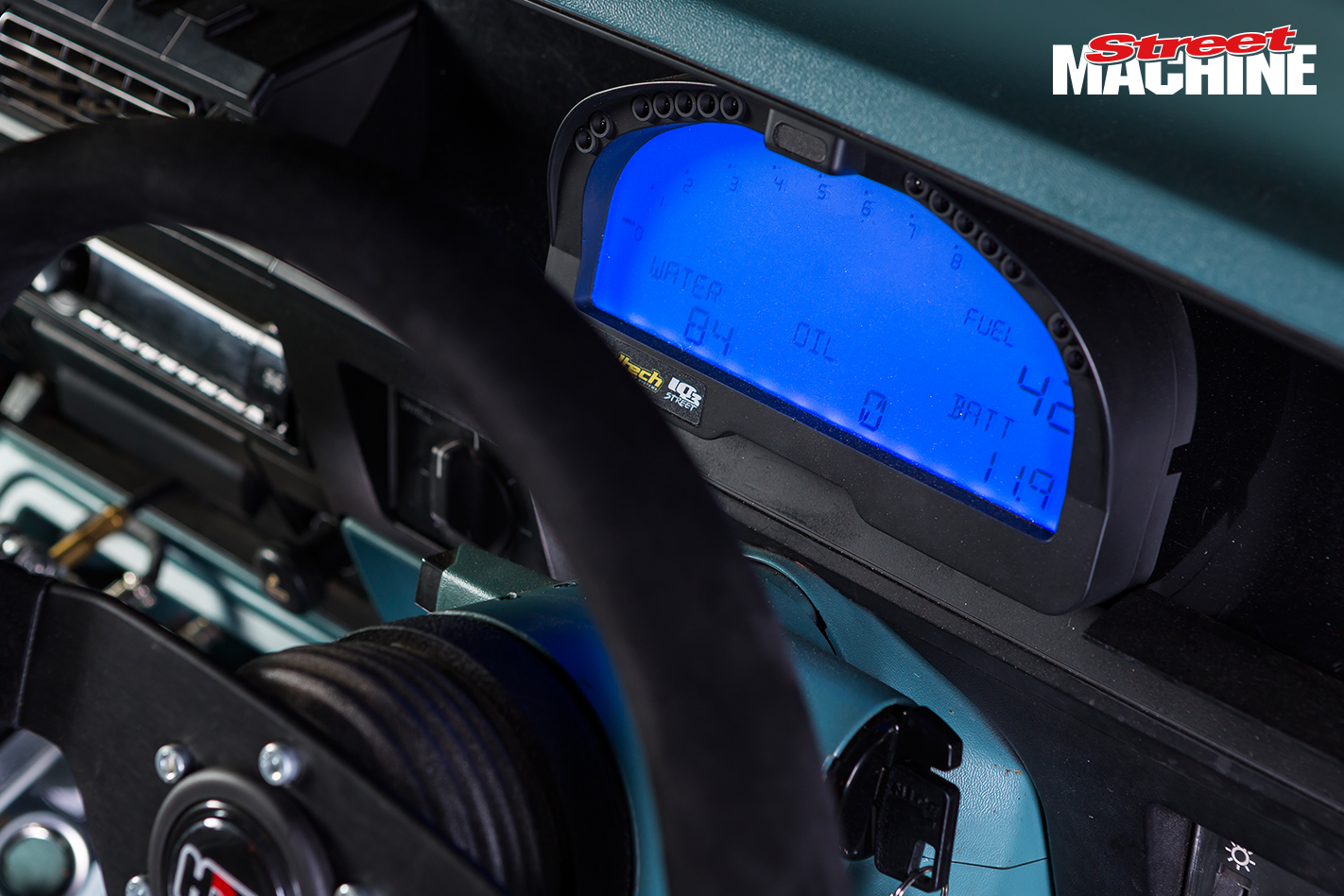 The factory brown velour trim had to go, and Louis’s modest plans of sourcing a second-hand Cerulean interior were shelved when he stumbled upon a set of hard-to-find Scheel seats for sale online. It was yet another unplanned expense, but it nails the HDT theme and finishes the car off a treat. The Precision shifter was chosen to match Louis’s black Torana, and the Racepak dash was his first ever Father’s Day present. 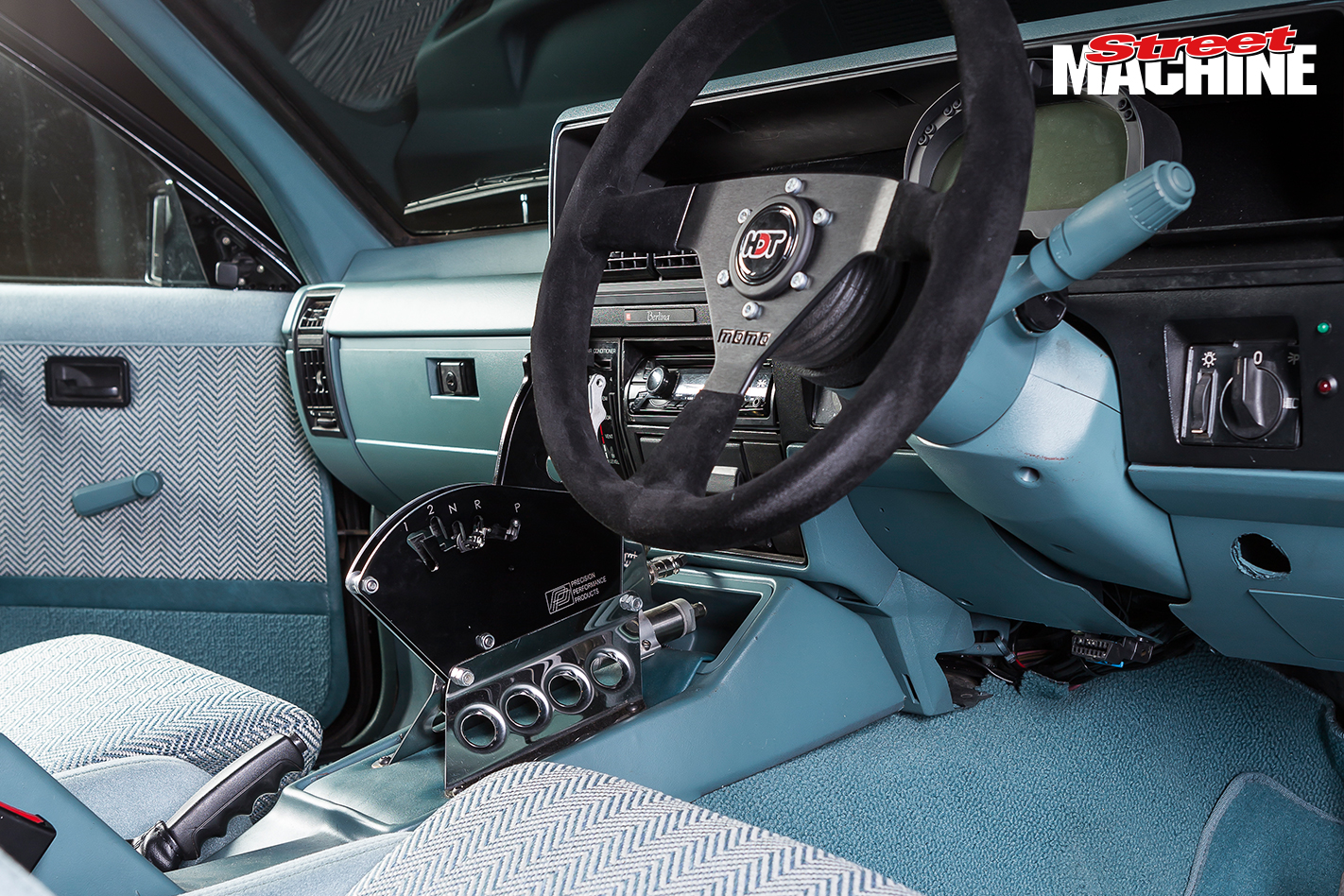 “The car just kept getting better and better as it went,” Louis says. “At first it was going to be a basic untubbed, manual, apso LS thrasher, but it ended up pretty full-on. Luckily Wayne kept geeing me up the whole way through, and the budget tripled, but I’m glad. The response I’ve had has been unbelievable. I’m not a huge Commodore guy, but so many people love the car. 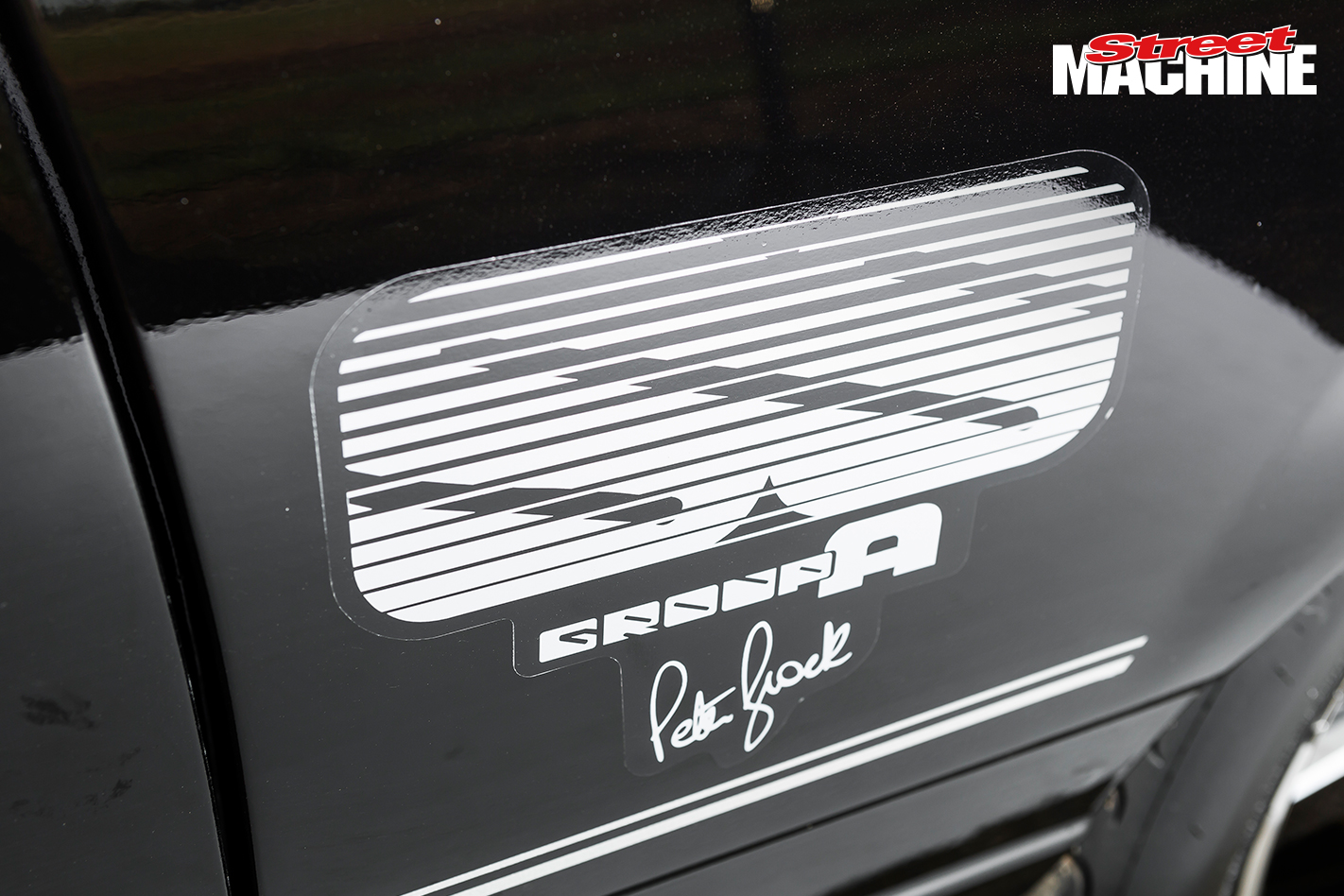 “It’s still family oriented and safe, but it’s also fast when the family are out of it,” he continues. “I really want to do Drag Challenge; it’s one of my favourite events because it’s all about strip cars and the street. I hate missing out – it’s depressing if I’m not there. We’ll ’cage the car, fit some radials and go for gold. I’d love to do Drag Week in the States – it’s a goal, but it’s also a big maybe at this stage.” 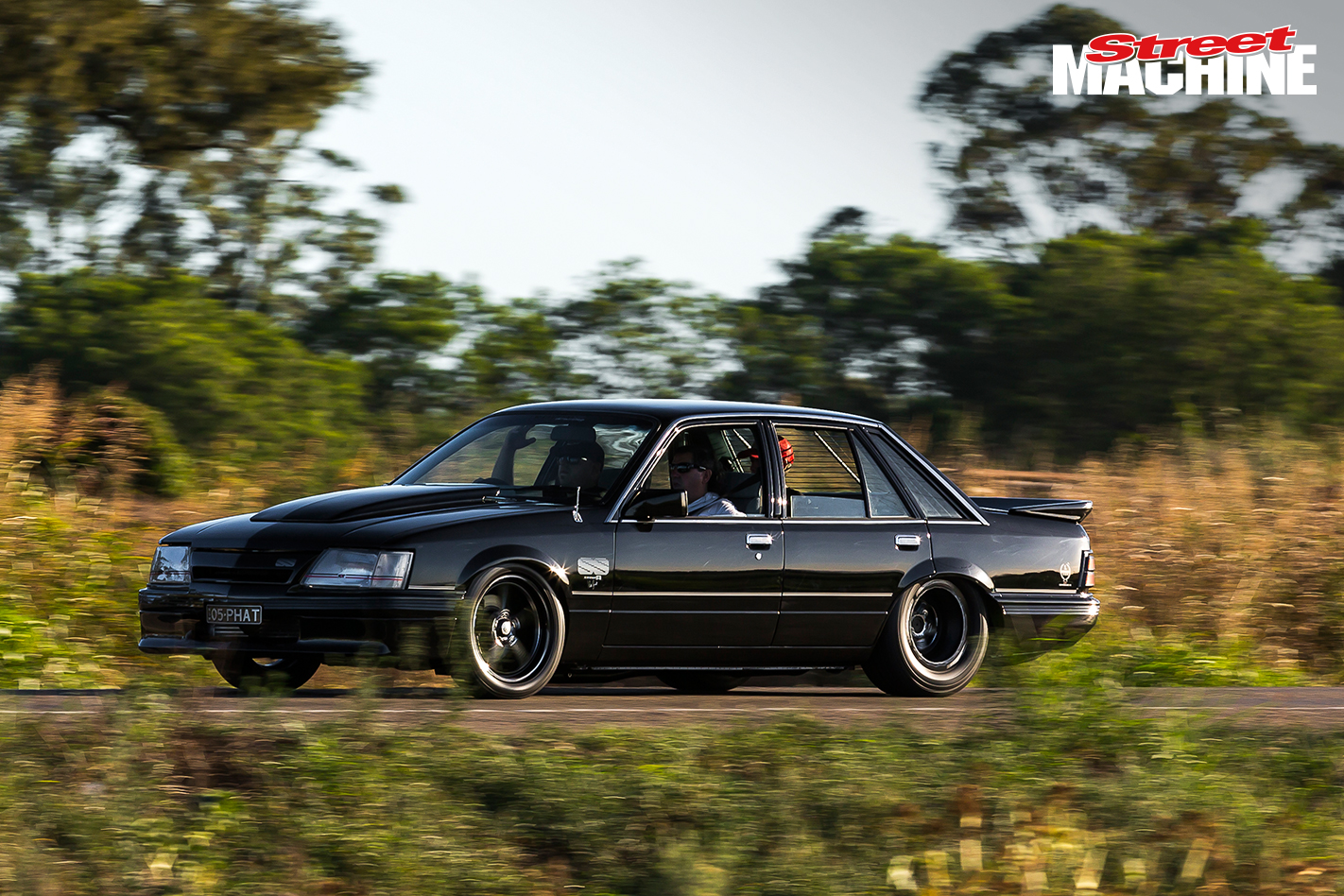 This latest toy is a big departure from the norm for Louis – no chrome bumpers, no tubs, no blower and no carbies! So what does he make of the finished product? “It’s my first EFI car and my first turbo car – I’ll be honest; I’m hooked!”

THANKS
My wife for her continuous patience when it comes to my hobby; my family, especially my dad and brother Danny; Wayne Grima at Grima’s Garage – the man behind the build; Pauly Abela at Pauly’s Restorations for paint and panel and everything in between; Dean Sammut, the sparky that never hands out bills; Damien ‘Chubb’ Lowe and Jason Lowe at Lowe Fabrications for the advice, parts and countless phone calls; Luki at LS Autoworks – turbo and tuning guru; Carl and Paul the trimmers; Scotty and Mouse at Rocket Industries; Jason at Dominator; Al at Al’s Race Glides for the shifter; Zoran at Black Track Towing; everybody else that lent a hand