This Holden LC Torana GTR was a 10-second six-cylinder machine with an old draw-through turbo. But now it’s got EFI and a new boosted 202 under the bonnet, look out!

WHEN it comes to turbos, Jeremy Cullen is what the geeks call an early adopter. He’s been running a turbo six for 20 years on his genuine LC GTR, although it was initially a pretty low-tech affair utilising a draw-through carby set-up. 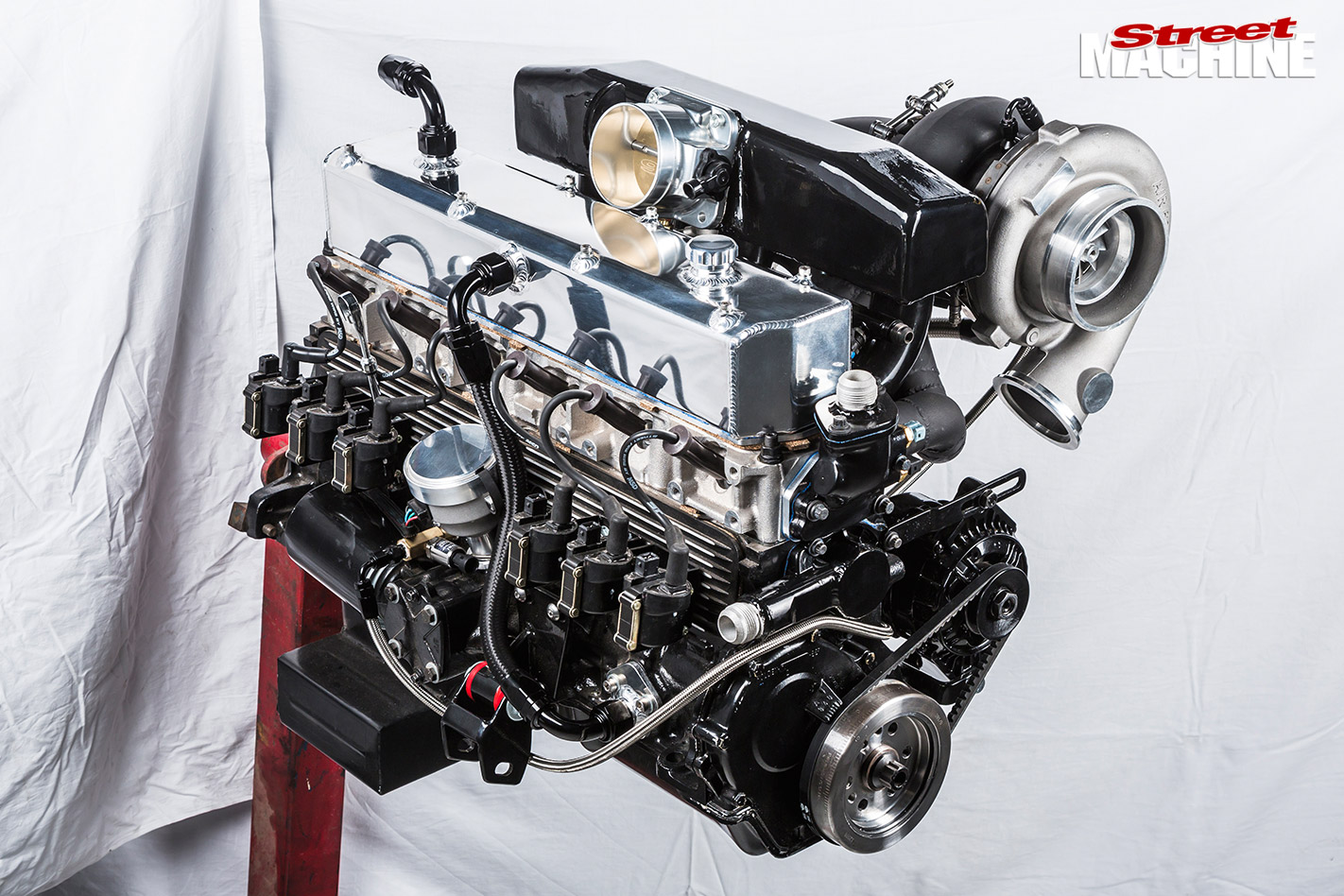 The use of a Davies Craig electric water pump tidies up the front, while a row of Bosch coils have been mounted neatly along the block

“I’ve had the LC since I first got my licence; it’s my first car,” Jeremy says. “I decided to go EFI and started building a new engine. That was sort of dragging on a bit and halfway through building the engine I thought I’d give the car a bit of a birthday as well. I stripped it back to nothing and started again with it. The turbo and intake manifolds were done at Moolap Mufflers, but the pipework from the turbo to the manifolds I did myself.” 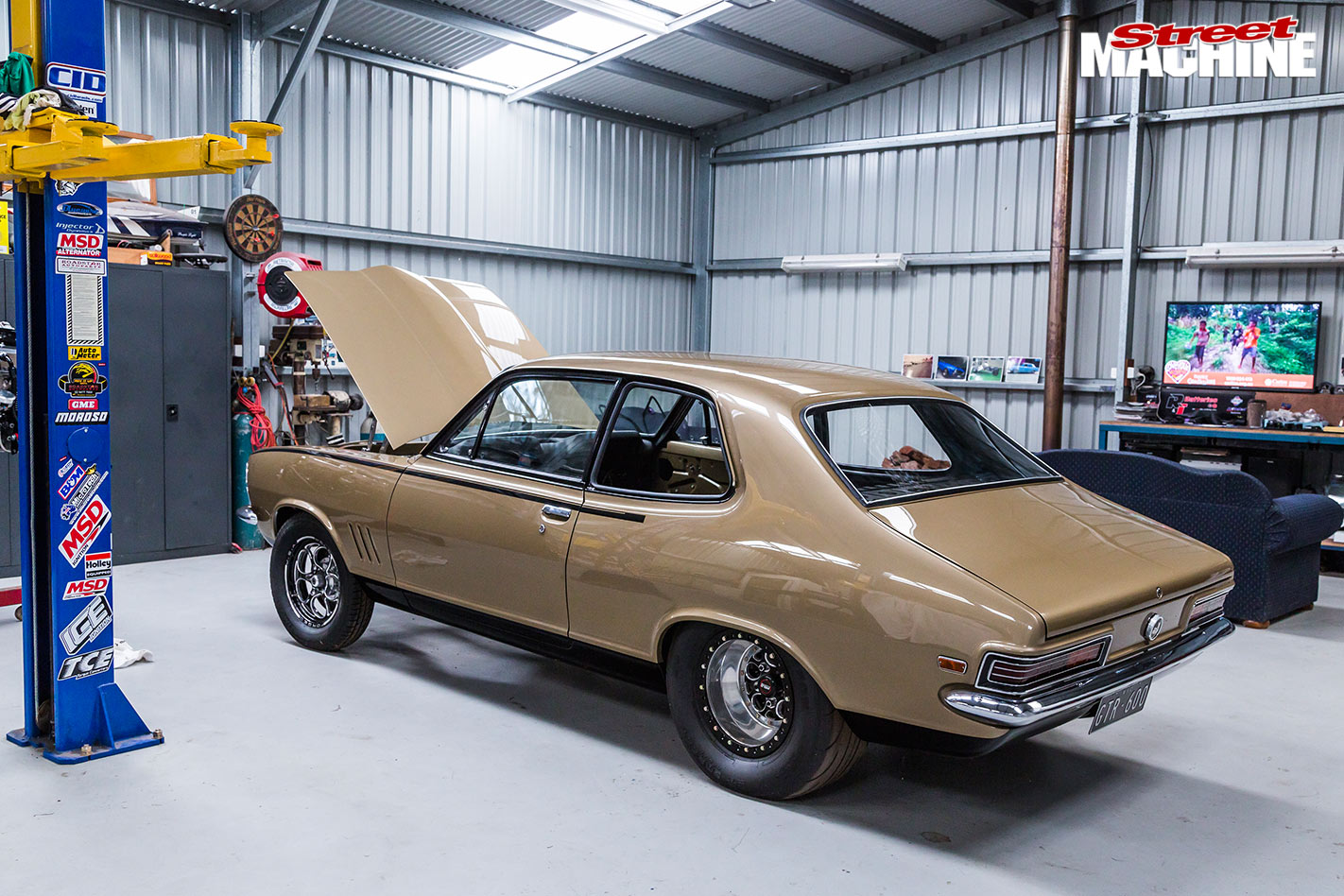 Jeremy’s LC was no slouch with the old combo, but turbo and fuel delivery technology has moved along so much in the past 20 years that he knew he could get a lot more out of it. “I put EFI on the old engine set-up and it was on there for a couple of years. It ran 11.2@118mph with the carby set-up, and when I went to EFI and E85 I ended up running 10.7@128mph on 22psi of boost.” 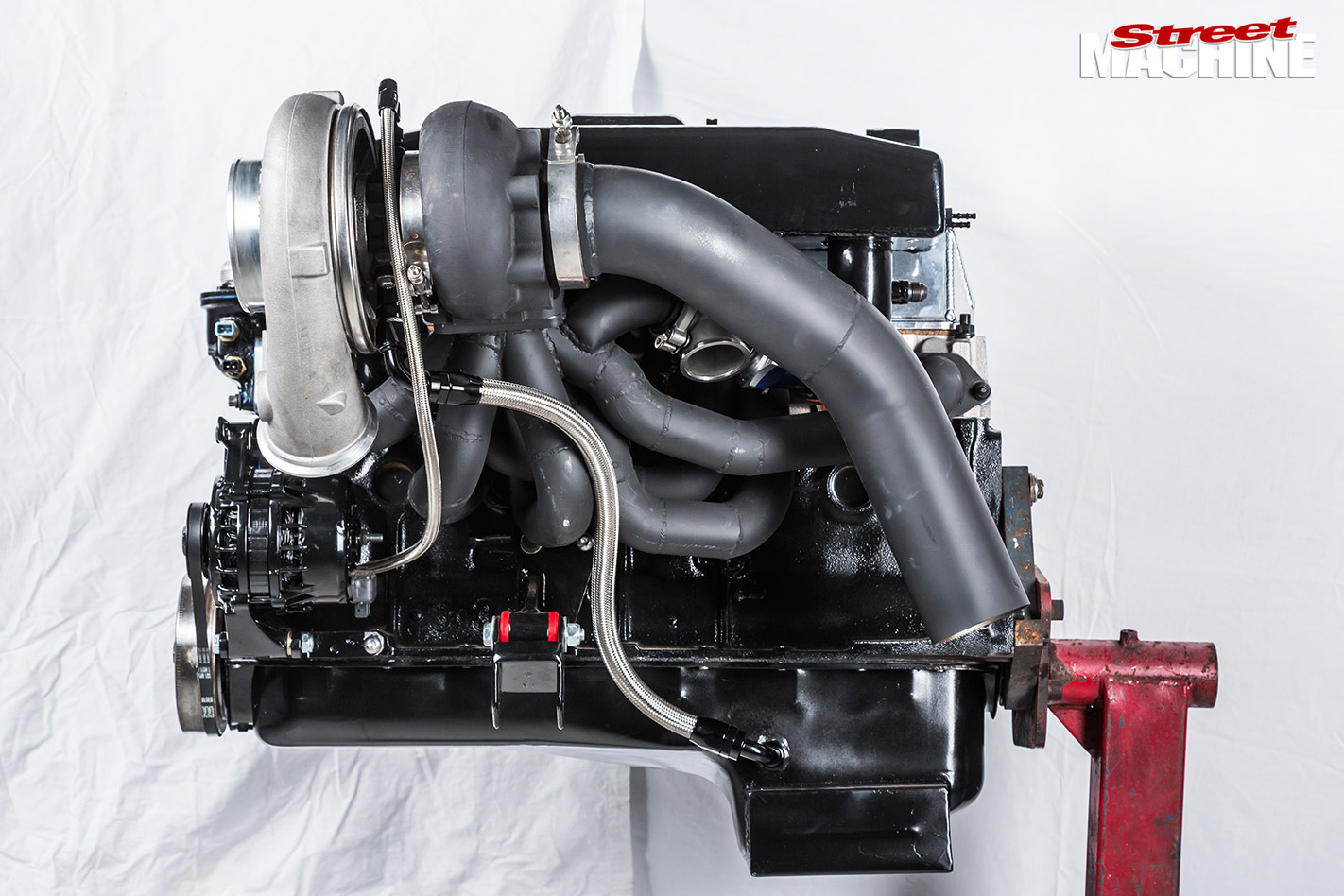 Jeremy wanted to make sure everything stayed under the bonnet, so the turbo piping required some pretty tight packaging

That’s pretty stout by any measure, but there was a pretty good chance that Jeremy had a time-bomb on his hands, so the new combo has been built using a black engine as a starting point. It has the advantage of having a fully counterweighted crank, and the bottom end now has an ARP stud kit and stud girdle to keep everything rock-solid. Up top there’s another stud kit to make sure the head stays bolted down, but while the old block was O-ringed with a copper head gasket, this time around Jeremy has been advised that a Cometic head gasket was the way to go. “It’s all new to me, but apparently they’re the go these days. Time will tell,” he says. 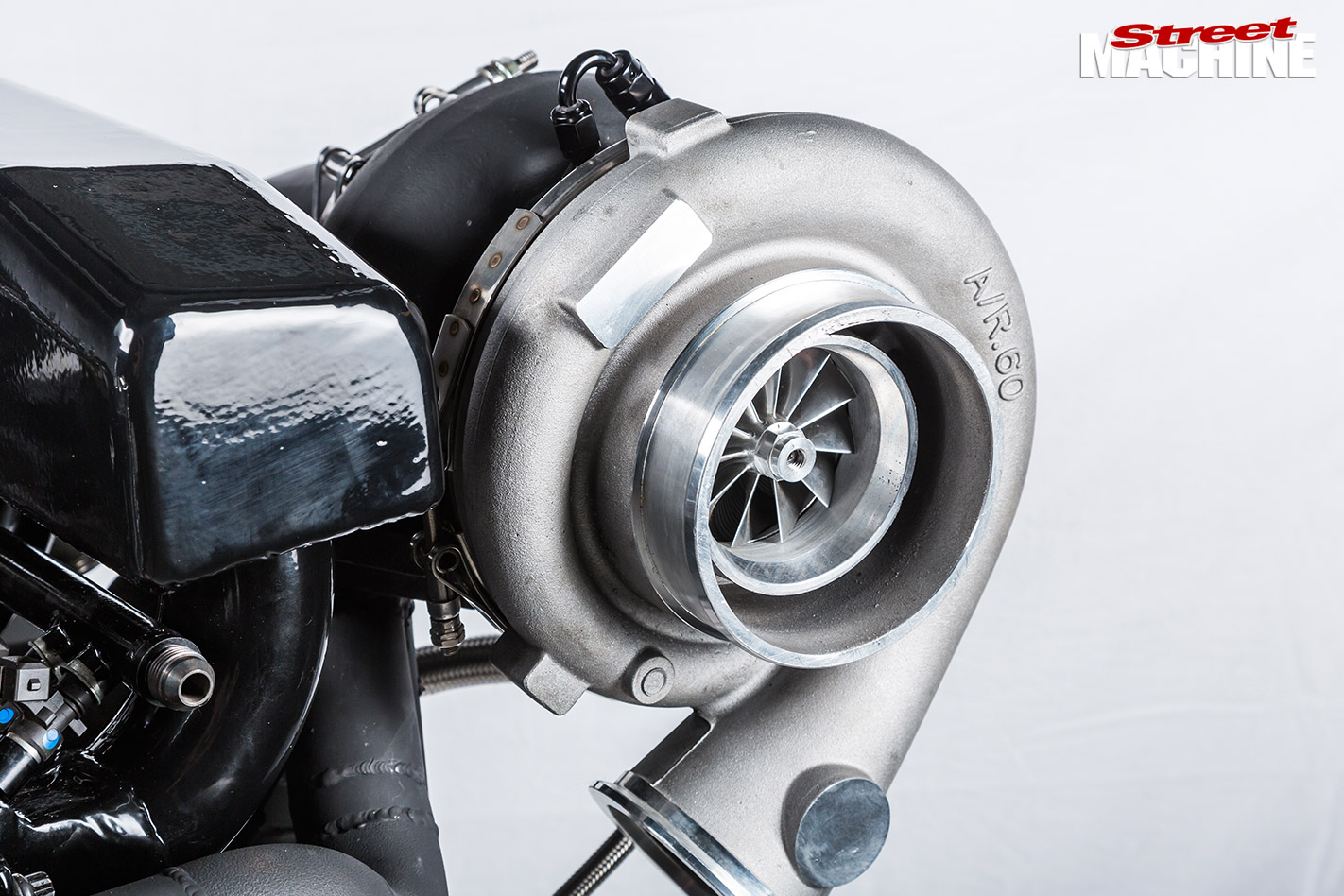 Another change that will make a huge difference is a massive jump in compression ratio. In the bad old days, you had to run very low compression to allow for the added boost of the turbo, so the old donk was just 7.0:1. The new engine is built with 9.5:1 compression, which means it should be pretty decent even when it’s off boost. 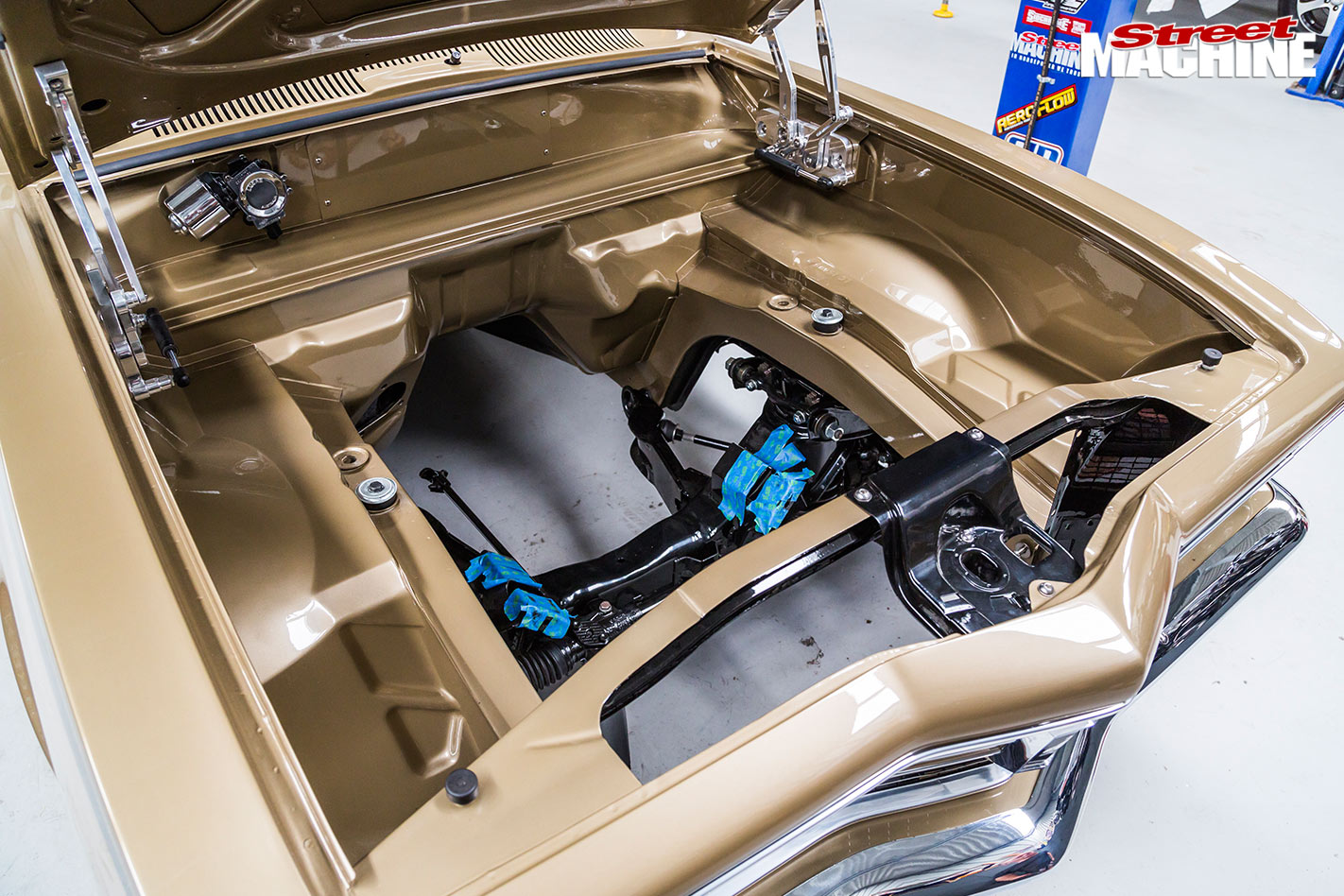 The old motor required water/methanol injection and a diet of avgas to stave off detonation, but it’s a lot easier to manage these days thanks to data acquisition and computer-controlled engine management. “It’s got a wideband oxygen sensor, a MAP sensor, water temp is tied in there as well and there’s an air temp sensor,” Jeremy explains. “You can also control the ignition timing with the Microtech ECU.” 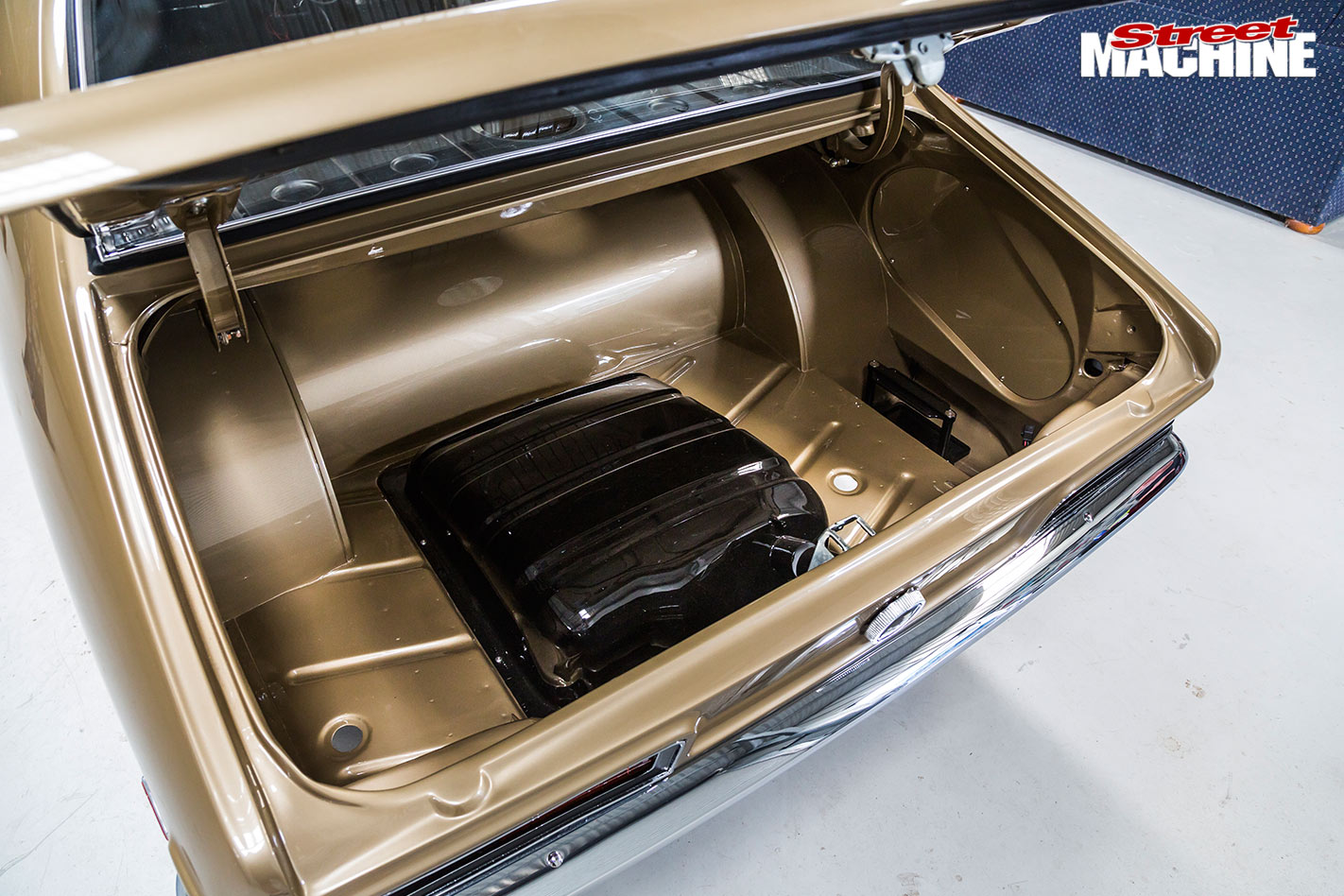 The rebuild included a set of tubs and an 85mm stretch to the rear wheel openings. The detail in the boot is just as nice as the rest of the car

Jeremy has also updated the top end of the motor with a 12-port aluminium Yella Terra head, which was sent off to Bullet Cylinder Heads in South Australia for a CNC-controlled porting job. The intake manifold – while looking similar to an OEM unit from a VK Commodore – has been custom-made. It features large-diameter runners that have been adapted onto the flange of the stock manifold, but with a much tighter radius to tuck everything a lot closer to the engine. The plenum has roughly doubled in volume and a 90mm Proflow throttlebody has been used. There is no intercooler either, partly because it’s not absolutely essential when you’re running E85, but mostly because Jeremy didn’t want to cut dirty great holes in his radiator support panel. 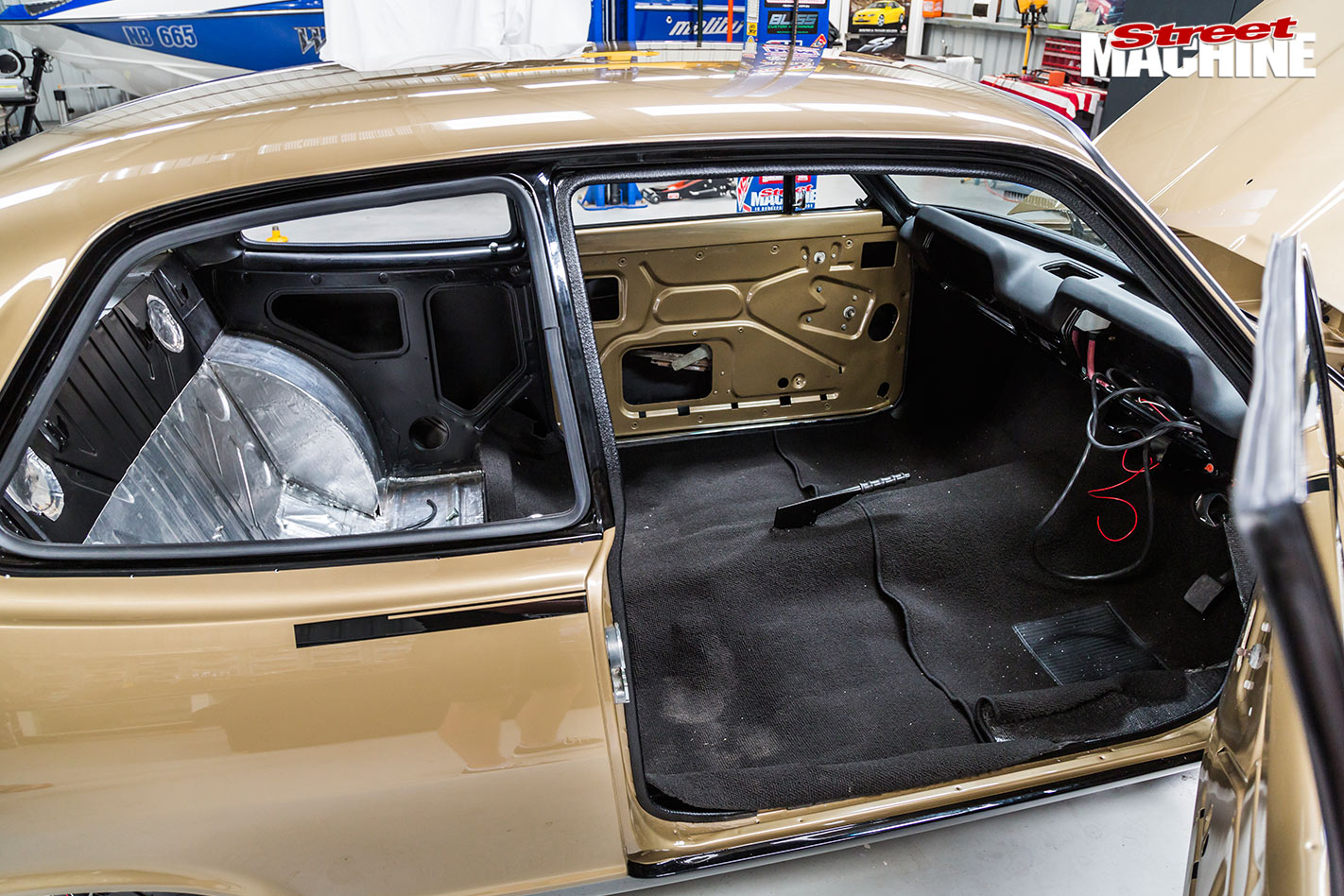 Jeremy has also stepped up a bit in the turbocharger department: “The old motor ran an XR6 turbocharger, but I’ve gone to a GTX42, which is quite a bit bigger on the intake side, but the exhaust housing is the same. I was quite happy with the way the XR6 turbo performed, but Craig Dyson [from Dyson Bros Racing] recommended the GTX42 and said I’d be able to make as much power as I want. The motor’s built to handle 25psi and it shouldn’t be any problem to make 500hp-plus at the wheels. My old one was about 445hp, so if I could run a low 10 or maybe crack a nine, that would be great!” 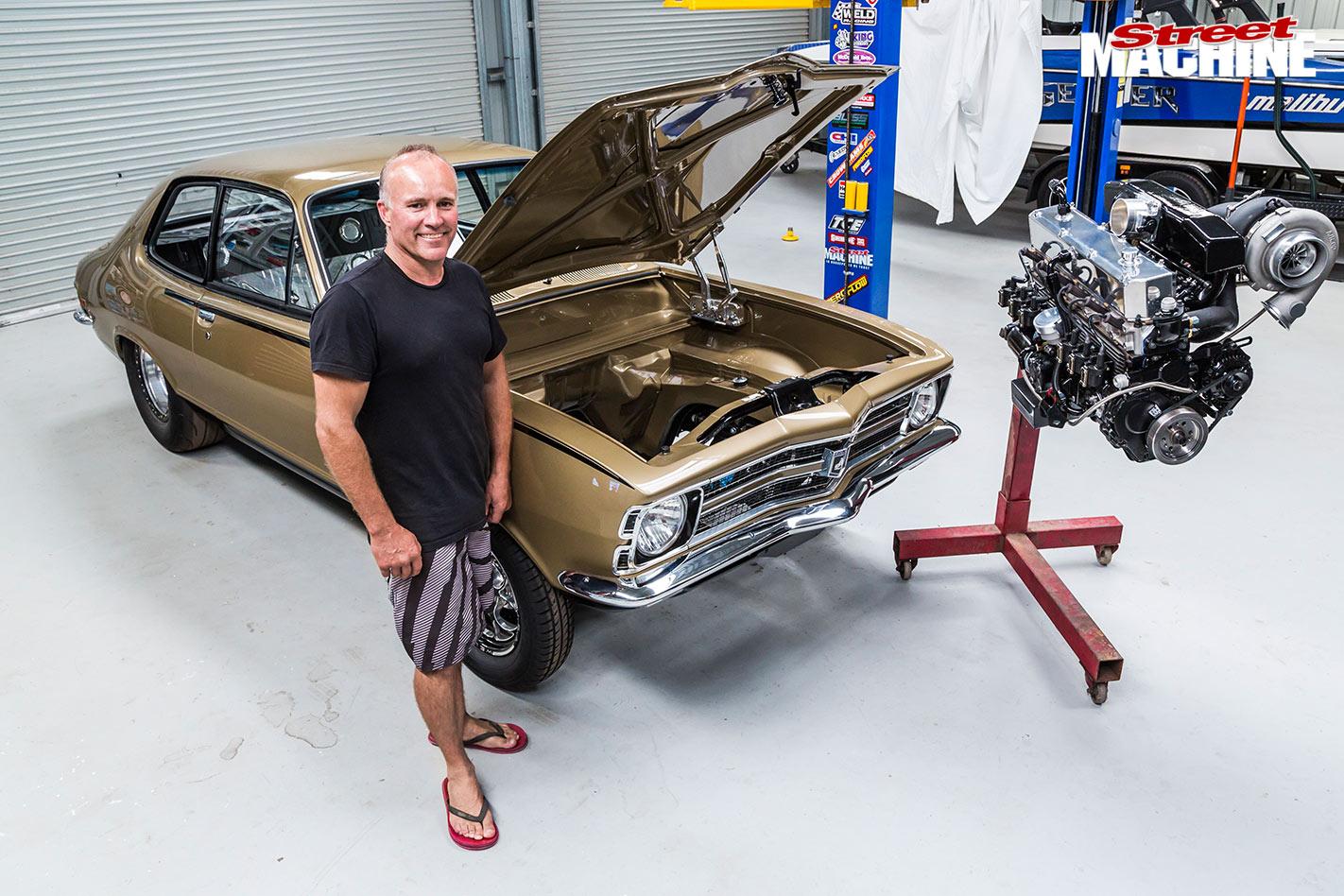 Jeremy’s smile is even bigger now, as the engine is in the car and it’s all running. He plans to bring it to Summernats and hopefully make the Top 60