When you’re mates with one of Australia’s top Outlaw 10.5 drivers, your project car is never likely to be lacking in the attitude department. Stan Karanikolas is mates with Paul Mouyahet, the world-famous Doorslammer driver, and also holds the keys to this tubbed, twin-turbocharged LS-equipped IS200 Lexus, which has killed it on the show circuit and is about to hit the strip.

“I bought it off a mate of Paul’s,” Stan explains. “Paul put me on to the car about the same time as Peter Cleary, another mate who builds race cars, did, and I bought it. I already had an IS200 I was ready to chop up, which was a limited-edition yellow one, but then this one came up.” 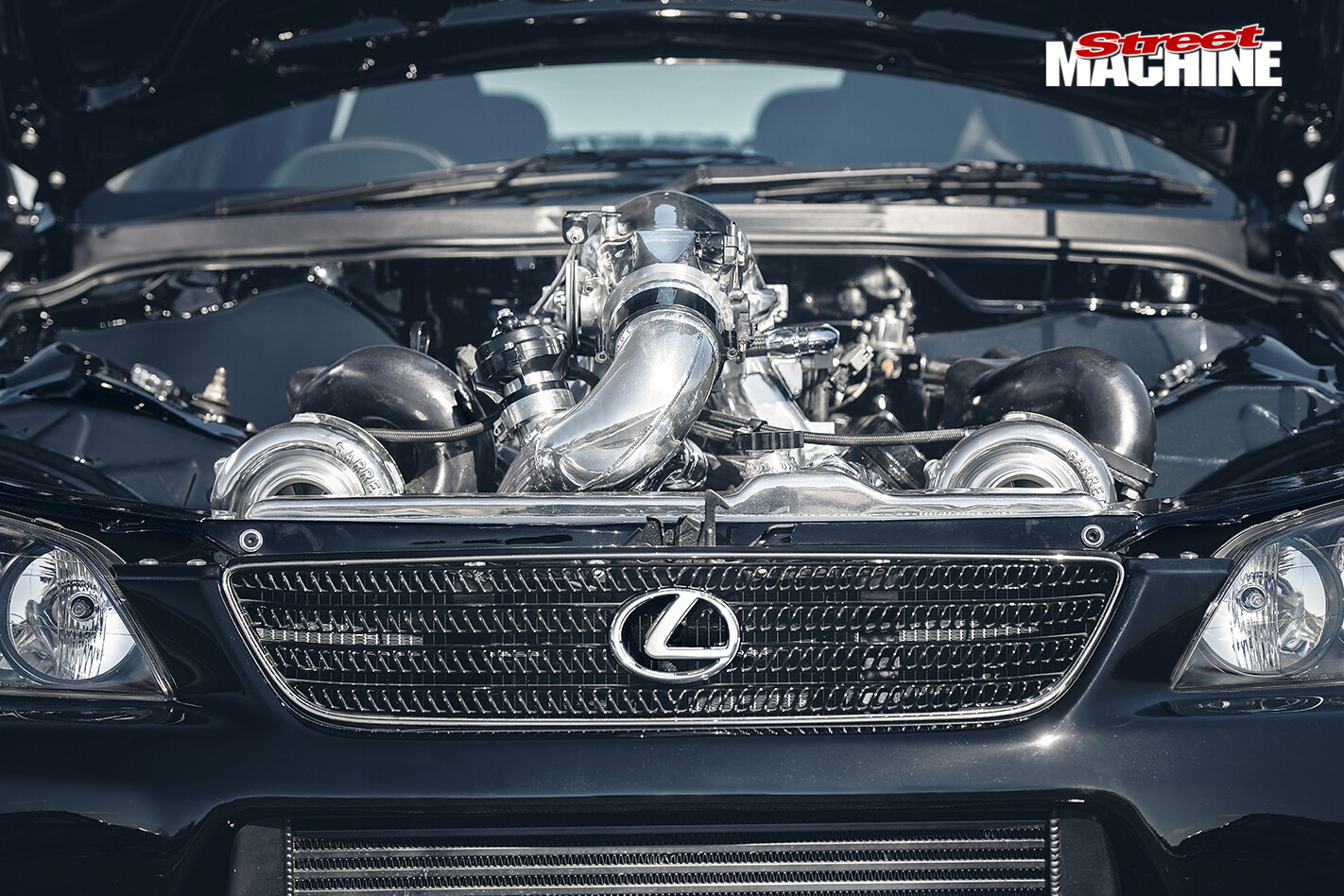 Looking at the little Lexus objectively, you can understand why you’d be drawn to one to make into a race car; they’re dirt-cheap to buy, the driven wheels are at the correct (rear) end, and they have a roomy engine bay. There are even a growing number of Lexus IS200s and IS300s prowling Aussie streets chock full of Chevy alloy bent-eight. But Stan’s reasoning was a little simpler.

“Everyone is doing Commodores or Falcons, and I wanted something out of the ordinary,” he says. “The plan was always twin-turbo LS in an IS200, because everywhere you look you see Commodores with blowers and turbo Falcons, so I thought this would be something pretty different!” 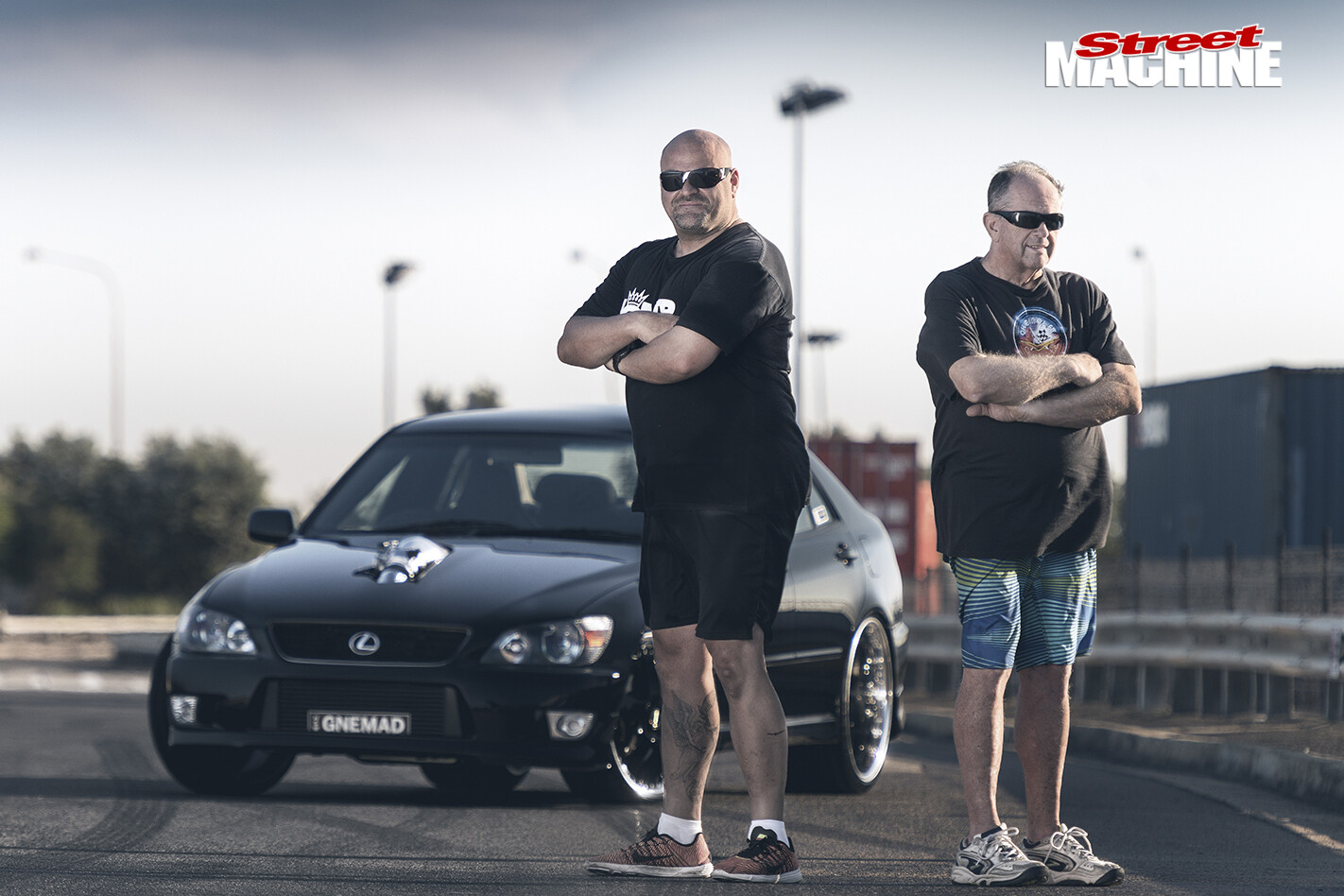 GNEMAD’s heart is an L98 six-litre, as found in manual VE Commodores, with the Gen IV packing Manley forged pistons and conrods, Comp springs and stainless valves, topped by a Holley high-rise intake manifold. The Haltech PS2000 ECU controls everything from the twin 12-inch thermo fans to the Bosch ID2200 2200cc injectors, while the combo is oiled by a Canton sump and fed by a trio of Holley Dominator fuel pumps.

“The engine only had a quick tune at CV Performance as we did it the night before Summernats, but it still put out a very respectable 590rwhp on 9psi. But we have 1000rwhp in our sights when [CV’s] Con and Vic Elfes turn the boost right up.” 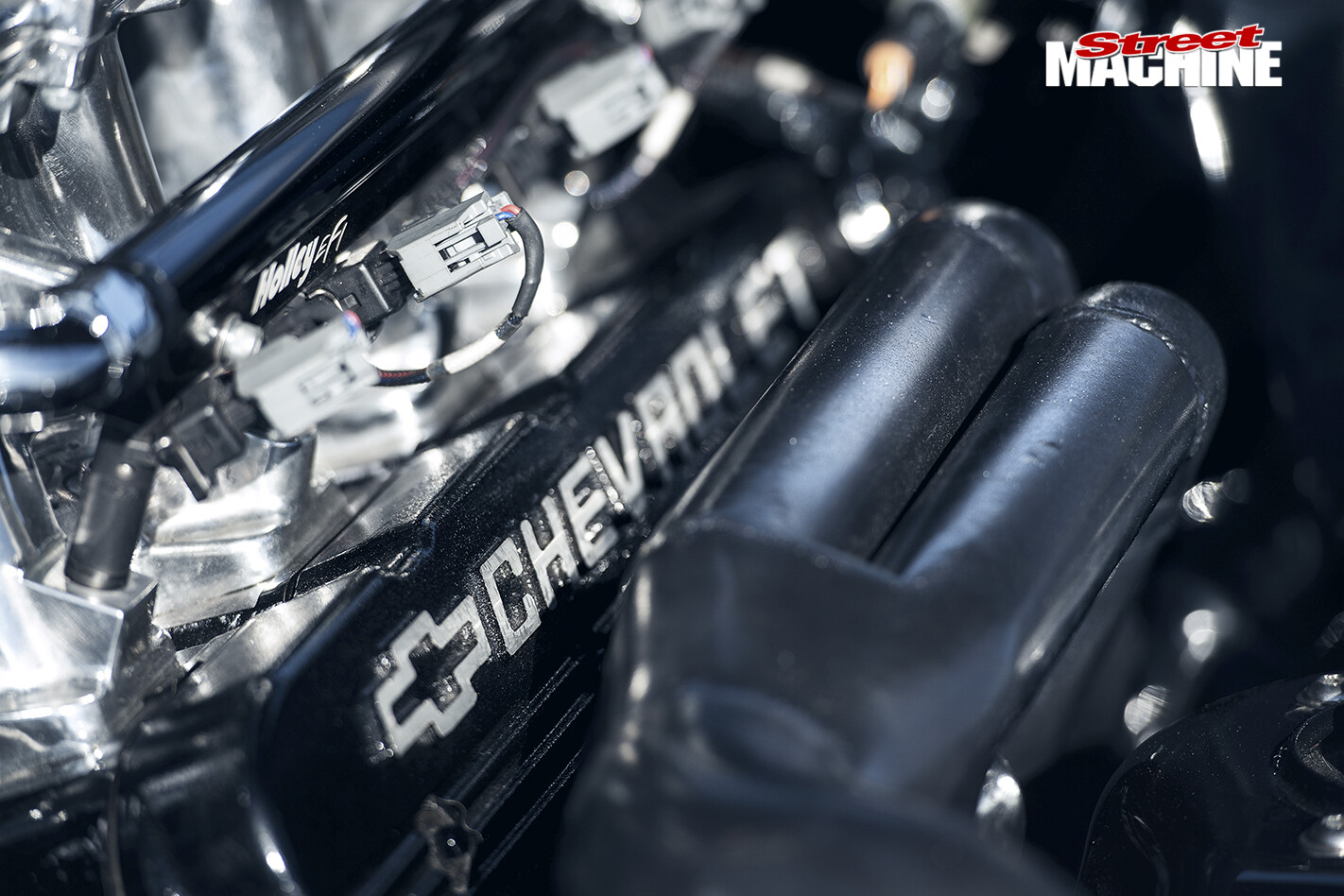 The real showstoppers in this combo are a pair of Garrett GT3582R turbochargers, modified by Precision Turbochargers in Wetherill Park, Sydney. Sitting right out front in the breeze, they’re mounted on custom headers Stan himself whipped up, running out the back via a twin three-inch exhaust system.

“I did all the pipework fabrication on the motor, but Peter Cleary at Pro Racing is a mate of mine and he did the chassis, ’cage and heavy fab work,” Stan explains.

Peter is known for quality chassis work and he has done a real job on the rear end, with mini-tubs opening up enough space to slide in a full custom sheet-metal nine-inch, Strange coil-overs and custom four-link control arm set-up. 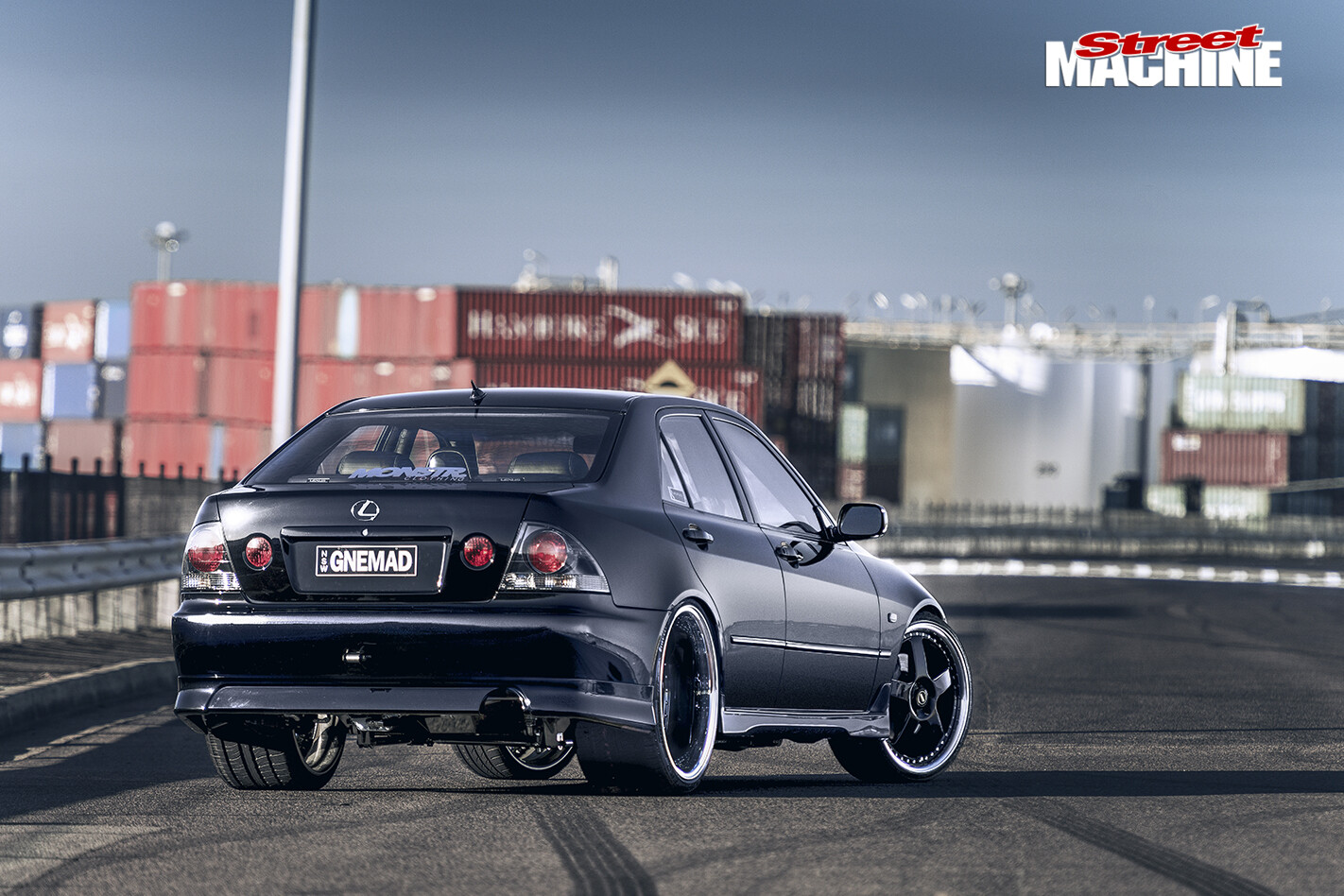 “The nine-inch is a full-on diff that Peter built using a Competition Warehouse sheet-metal housing with custom axles and all the good gear,” Stan says. It hooks up to the back of the Pro Outlaw-spec two-speed Turbo 400 transmission built by Protrans, with a TCE torque converter and custom driveshaft finishing off the driveline.

A custom fuel tank has also been jammed underneath the IS200’s pert bum, and holds a lot less E85 corn syrup than the original production unit, although Stan really only needs a range of a bit over 400m.

It’s hard to miss the Simmons FR 20x9 and 22x12-inch wheels, but the gigantic hoops do a good job of hiding the twin-turbo Toyota RZ Supra four-pot front brakes and Wilwood four-pot rears. They’ve been done in jet black to match the bodywork, although will be swapped out for a set of smaller strip wheels and sticky rubber when the time comes to really wick up the IS. 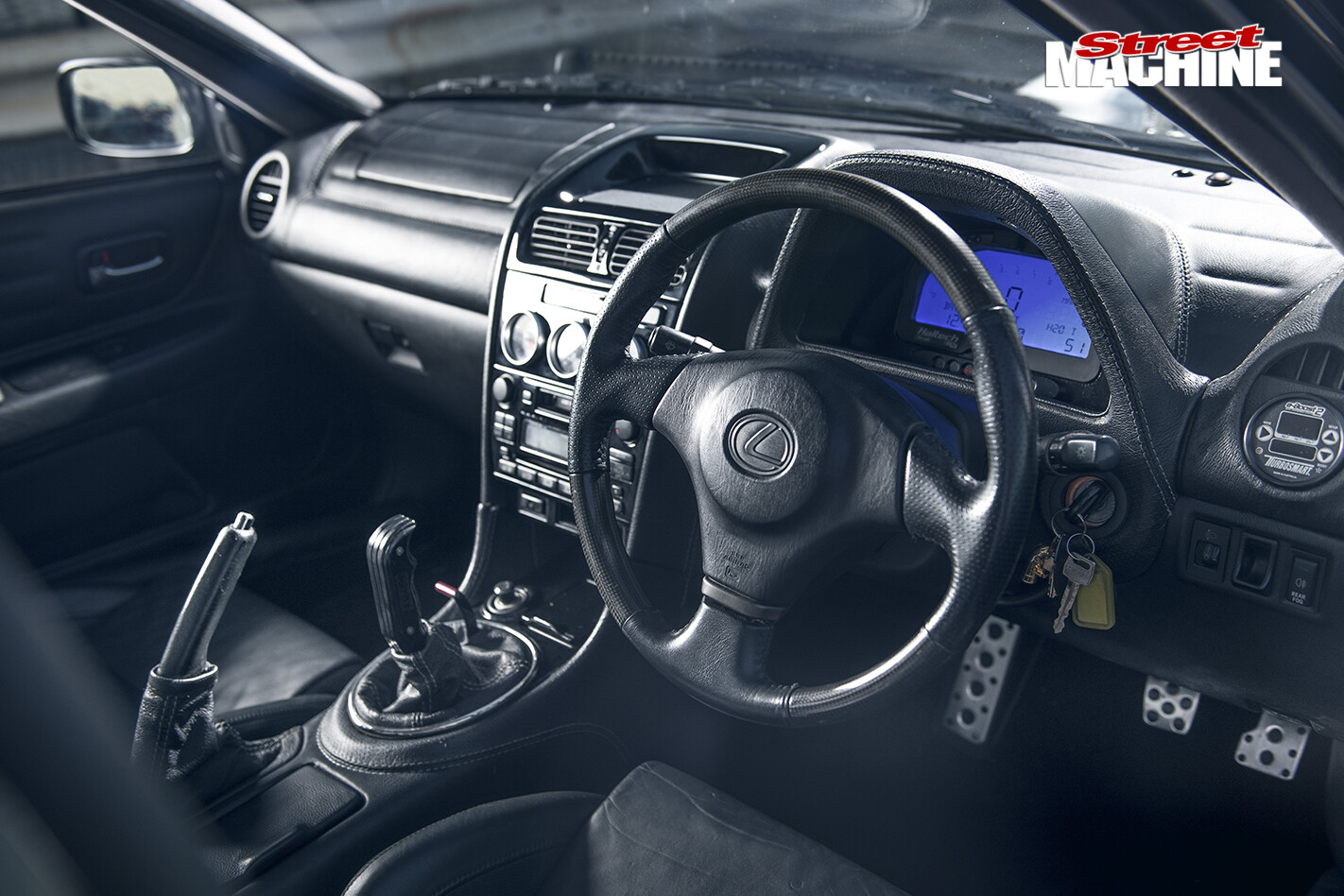 Thanks to the original Lexus independent rear suspension, the rear end only needed a mini-tub to swallow a pair of 12-inch-wide rollers, though more work was done up front, with a fully smoothed engine bay that looks slick and features a false firewall.

“The body was 90 per cent done when I got the Lexus, with that rear end alreadydone,” Stan says. “Theo from Fleet Spray Painting got the shell ready for paint, I had the engine bay and the boot area redone, and then the car was sprayed black with a light blue pearl by Pedro at Fleet Spray Painting.” 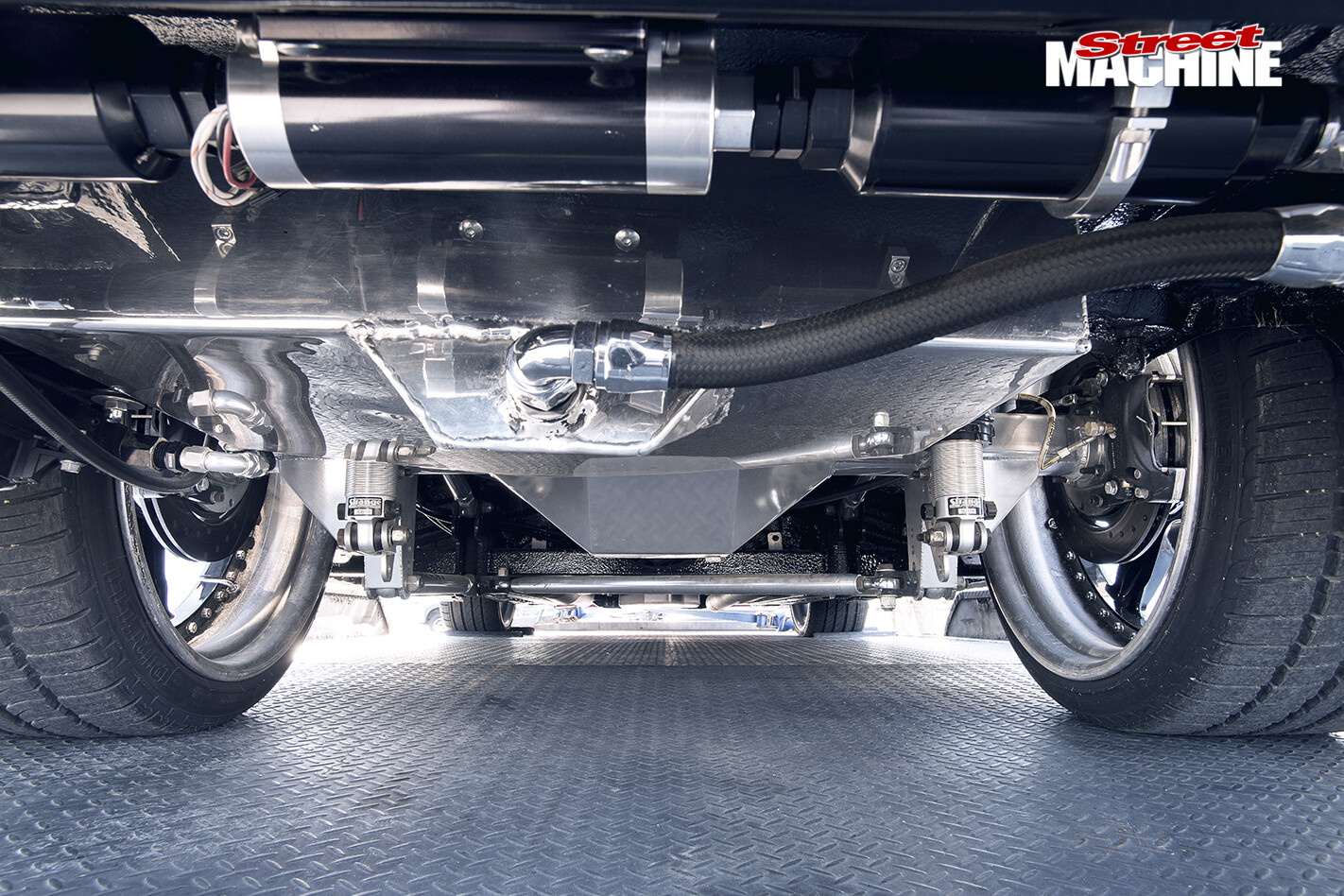 Inside, the heavy luxury Lexus trim was binned in favour of a Haltech IQ3 dash, Hurst Pro Ratchet shifter and a pair of carbonfibre Recaro seats, paired to a carbon steering wheel. Pro Racing’s ’cage has been tucked tightly against the interior to give Stan the maximum amount of space possible.

Amazingly, for a race car, Stan left the stock stereo in the front end. “It’s hard to beat standard Lexus stereos,” he laughs, quickly adding, “but who needs one when you have revs and turbos to listen to!”

All that detail work was part of Stan’s plan, with GNEMAD landing in the Summernats 29 Top 60 Elite hall and wowing the judges with its bad-arse engineering and slick finish. Amazingly, it didn’t take anywhere near as long as most Elite-level builds, although the race-ready stone guard underneath certainly helped that timeframe! “I think from the time I picked it up to the time I unveiled it at Summernats was about 18 months,” Stan says. “The hardest part of the project came down to time, it was the big killer, and having the money there.

“Probably around the middle of this year I’ll start racing it, as I wanted to show it first before I ruin it racing. I wanted to run it in the radial class, but I’ll see how I go.”