THE Yanks will barely know what’s hit them when Jamie Farmer’s XH Falcon ute shows up for Hot Rod Drag Week in September. Dubbed the Dirty Bird, this Toowoomba-built monster is a sleeper and a half – that is, as long as Jamie leaves the tarp on and the cover over the pair of 69mm BorgWarner turbos mounted behind the cab. “I think the Americans will love the Bird,” Jamie tells SM. “They don’t have utes over there, and apparently they like ’em!” As SM readers may recall, Jamie featured in our pages in May 2007 with his old nine-second, twin-turbo Windsor-powered Capri streeter, and again in May 2009 with his twin-turbocharged BBC-powered Mustang. But the Dirty Bird is something else.

The ute remains untubbed and is fitted with 275 radials, as is Jamie’s preference dating right back to his nine-second Capri. “I’ve been running radials since around 2003 and I don’t think anyone was running them in Australia before that,” he says. “Back then we could only get the blemish tyres, too!”

“We built this car in a few months,” says Jamie. “The whole idea was to make it look like anybody could do it. Even the fab work on it; I just got the apprentices at work to do it, so that way someone would look at it and go, ‘Shit, I can do that!’ 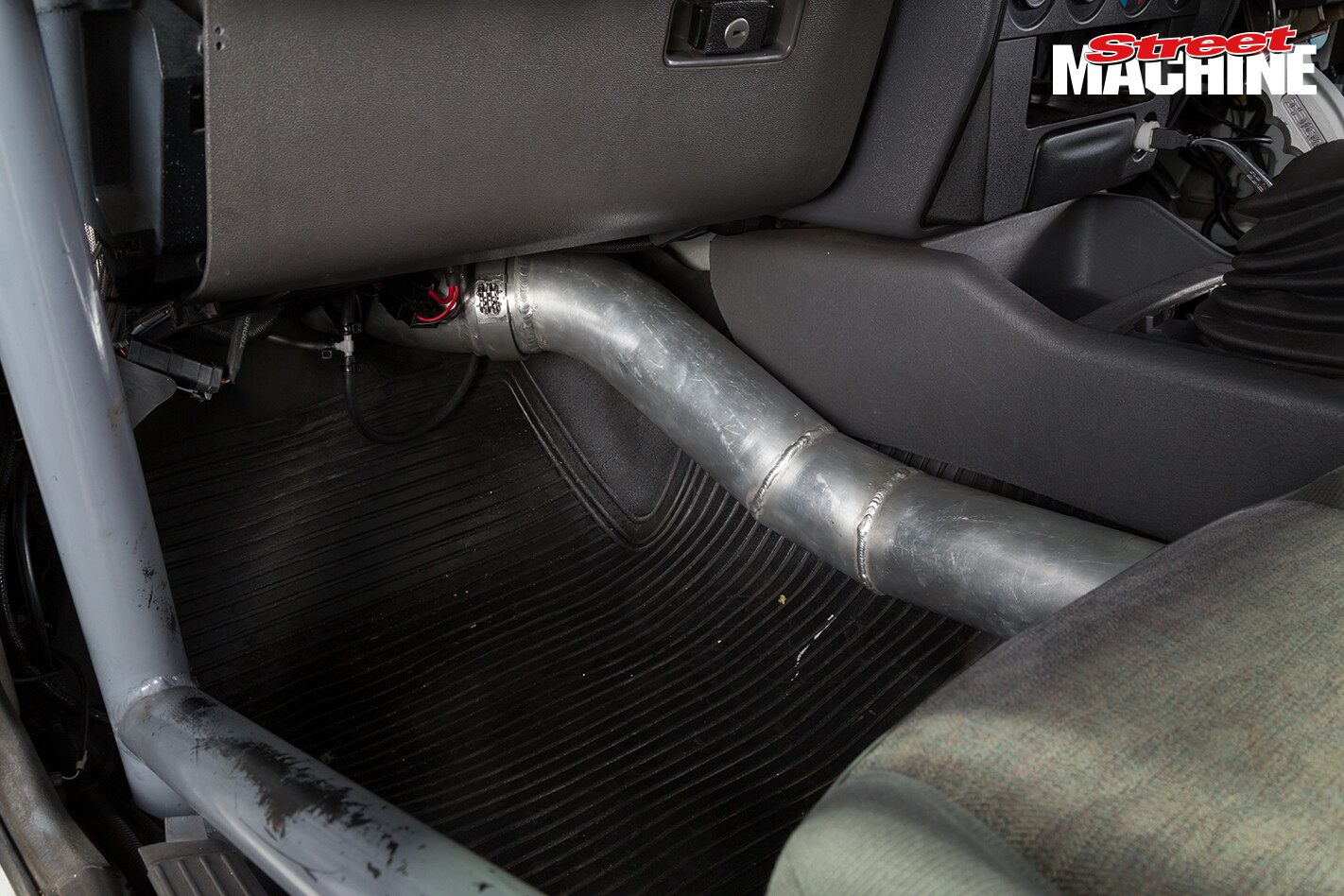 “So even though the car has got some nice bits in it, we’ve spent a bit of time on it and used some second-hand parts and it only owes us about 20 grand. And it’s already gone an 8.70 and it’ll easily go into the sevens.”

The Abott Engines-built 383ci stroker is an LS1 aluminium small-block out of a VT Commodore with ported 241 heads, CP Bullet pistons and an Eagle crank and rods. It’s got standard valves, Lunati dual valve springs, Straub Technologies bushed rockers and a 228/234 turbo-grind camshaft

The motor is a second-hand 383-cube LS stroker with the aforementioned turbos. The stroker motor is an LS1 aluminium small-block out of a VT Commodore with ported 241 heads, CP Bullet pistons and an Eagle crank and rods. It’s got standard valves, Lunati dual valve springs, Straub Technologies bushed rockers and a 228/234 turbo-grind camshaft It runs on E85 and is making over 1000hp no sweat. It’s got a Powerglide and the 8.8-inch diff out of Jamie’s Mustang, while an MS3Pro ECU controls the show. 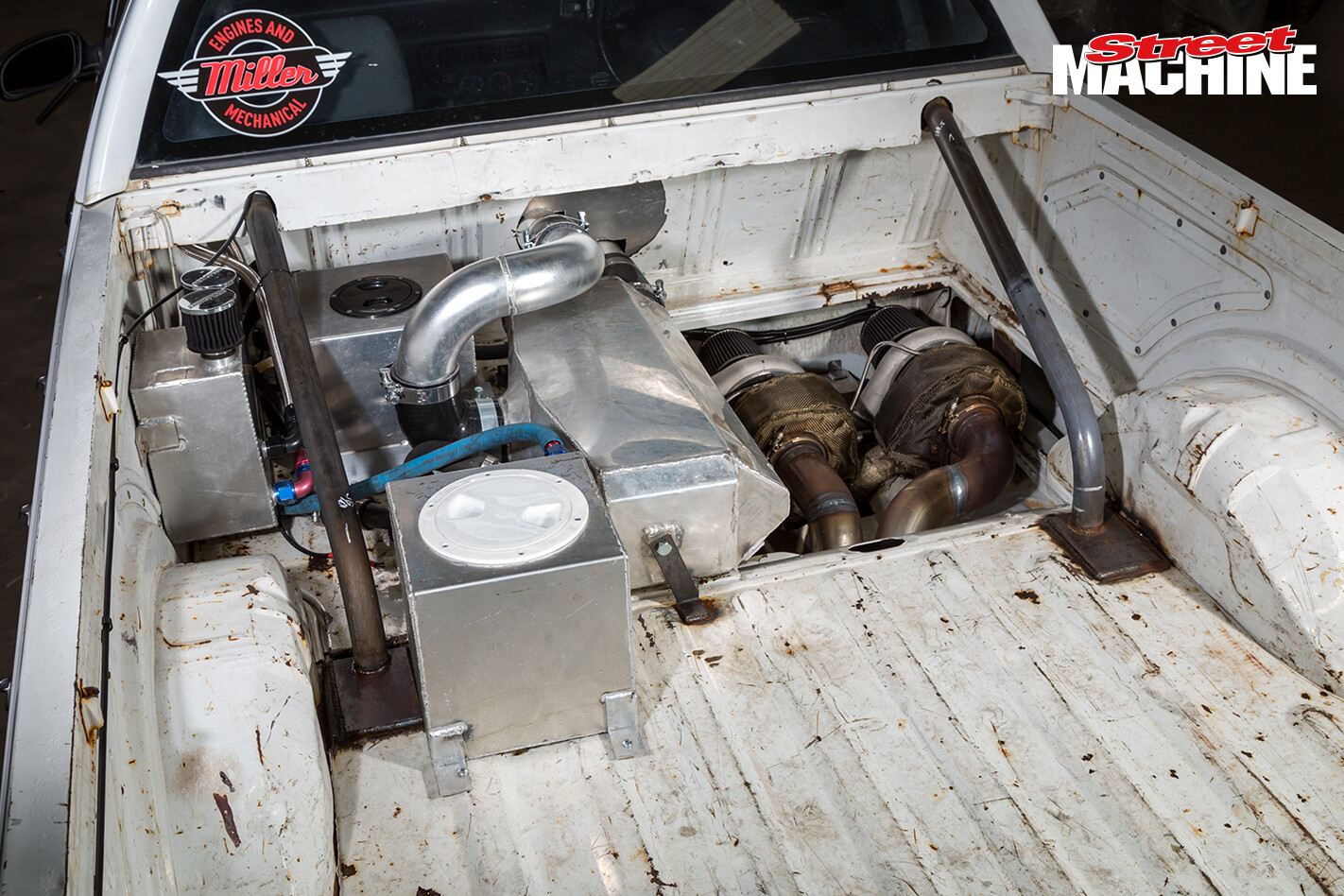 In addition to saving space in the engine bay, another advantage to having the intercooler and heat exchangers for the transmission in the tray is weight distribution. “Utes are nose-heavy enough as it is when you try to race them,” Jamie says. “This way it adds a little more rear-end weight”

The stock intake is still there, with VE exhaust manifolds feeding into a twin 2.25in system that links back to the turbos. “And I’ve got twin 3.5in dump pipes on it that have got caps on them, which goes to an exhaust system,” Jamie explains. “So to change it over from street to strip I just put the caps over the dumps”

The ute is packed with hand-me-down parts, including the Transmission Specialties 5000rpm stall converter, which was formerly used on a nitrous car. The two-speed Powerglide came out of out of Robby Abbott’s Mustang, while the 8.8-inch diff is from Jamie’s Mustang, which recently went the whole nine inches. Jamie has only taken it out to the track twice, where it has made constant gains, culminating in a best run of 8.72@158mph. “We’re only running it on 21 pounds of boost and it’s a really soft tune, and it’s doing it easy,” says Jamie.

Aside from trying to show that anyone can do it, another big reason for Jamie building the ute is as a test mule and rolling advertisement for his burgeoning performance parts business, Enemies Everywhere. “With Enemies Everywhere, we’re doing things like beadlocks, reluctor wheels, and a really nice anti-rollbar system, which the Dirty Bird has got on it,” he explains. “So basically this is a product development vehicle for Enemies Everywhere. The anti-rollbar system is really unique and really well made. We tested it on the car and when we were happy with it, we put it on the market. And the ARBs we make have gone berserk; actually, we’re selling shitloads of them over in the States as well as Australia.” Needless to say, Jamie is looking to Drag Week as a chance to mix business with pleasure.

“We’re basically sending the Dirty Bird over for a bit of fun and to push our Enemies Everywhere products,” he says. “I’m running it in the Small-Block Power-Adder class, which is capped at 8.50, so I want to run as close to 8.50 as I can. But when it finishes doing Drag Week in America it’s doing Street Machine Drag Challenge, where it will run sevens.” “The car is just so streetable, it’s not funny,” says Jamie. “We drive the car around in Toowoomba a fair bit, and it’s done a few race meetings. We’ve done a few big trips. We drove it out to Roma – a four-hour trip – and the roads are pretty average out there. So far it hasn’t failed us”