ORIGINALLY built on the hit YouTube show Mighty Car Mods, Ben ‘Mechanical Stig’ Neal’s Barra-powered ’87 Toyota Cresta has since become a two-time Drag Week finisher with a PB of 8.18@168mph to its name. The proprietor of Benny’s Custom Works is set to bring his 275 radial-equipped beast to run in the Speed Pro Six-Cylinder class at Drag Challenge Weekend at the end of November.

Amazingly, this well-travelled drag warrior actually started off as cheap transport for a mates’ trip Benny was going on in Japan. “We arranged for my mate Steve to buy the Cresta in Tokyo and had it shipped to Asahikawa in Hokkaido for a road trip with Marty from Mighty Car Mods and Al from The Skid Factory,” he says. “It originally had about 80hp at the wheels and it was the slowest thing in the world, but we covered more than 1800km in it!

The Cresta was runner-up in the Six-Cylinder class and 13th overall at DCW 2019, with a monster wheelstand to round out the weekend. While Ben has wanted to race both Drag Week and Drag Challenge in the same year, shipping times have so far prevented him from achieving that goal.

“The plan was to bring it in to Australia and sell it, but in between us leaving Japan and the car arriving here, we thought up building a 1000hp Toyota 1GZ V12 or a turbo 1UZ V8. Unfortunately, both options were out of the budget and the project stalled. Fast-forward six months and Woody [Al’s offsider on The Skid Factory]suggested a Barra, so we were back on. My mate Paulie did all the chassis work and ’cage at his place before we had even measured the engine bay to see if the over-height 4.0-litre was going to fit!

“We put that thing together in pretty much two weeks,” Benny continues. “The original build was so rushed, but we came together as a team. It was never intended to run bottom-eights; we were shooting for 10s and to maybe try for a nine, and it ended up going 9.9 on its first day at Sydney Dragway.”

That first build incorporated a stock bottom-end FG II Barra that ended up running mid-nines. Benny replaced that with his first built motor from Empire Mechanical before he sent the car to the USA for Drag Week 2018. This basic motor build was updated with a more serious Empire-built combo following Drag Week 2019, which made 1265rwhp on E85 at Summernats 33 during the Haltech Horsepower Heroes finals.

“That’s probably the highest power figure it’s ever made,” Ben laughs. “It normally makes around 1100rwhp on a Mainline hub dyno in Sydney. It runs around 38-40psi when it’s set to kill, but I can also turn it down to 26psi. We do have a 45psi map available, but we haven’t used it.” 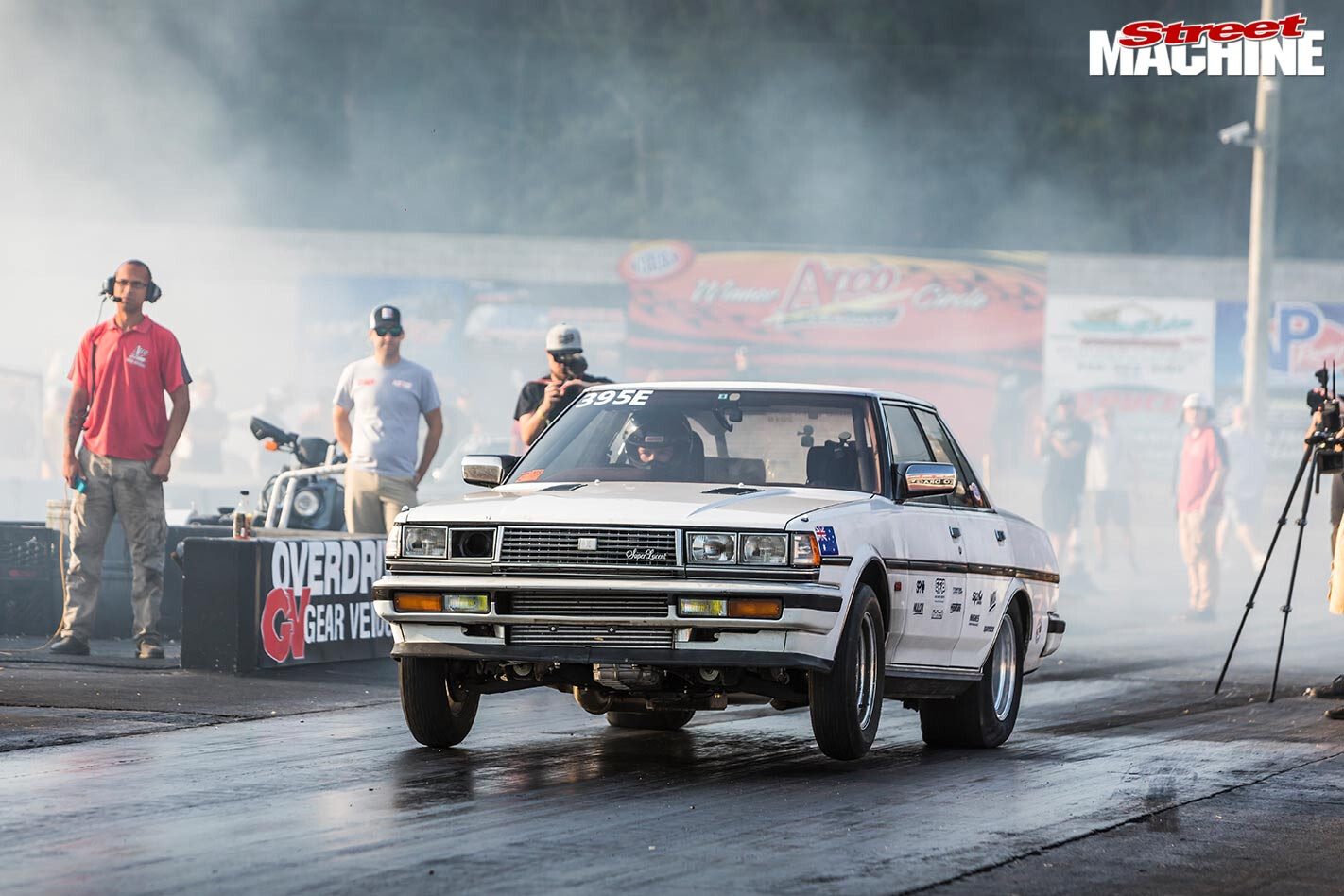 “The drivetrain has had a bunch of work done to it,” says Benny. “The Hughes TH400 has had a freshen-up, and I changed to a bolt-together Hughes converter before Drag Week last year. The 9in was running 3.5 gears, but we did 3.23 gears for Drag Week 2019, with an aluminium Moser third member, full spool, 35-spline axles – the lot.”

This current Barra is based around an FG I block and head, with a heat-treated Ford crank, Spool rods and Spool-spec CP pistons for “around 9.5:1” comp, according to Benny. He has stepped up to fitting fire rings and a copper head gasket, with a Horsepower Junkie billet oil pump and a BA Turbo baffled sump (as Ford removed the baffling from later-model pans).

Will we see the Cresta in the USA again? “I’d definitely like to do another trip to Drag Week, as we’ve never really run the car to its full potential over there. But it is a matter of having the money to be able to do it, as it isn’t a cheap exercise.”

Engine management is taken care of by Haltech, jam-packed full of goodies like an Elite 2500T ECU, iC-7 dash and a TCA-8 EGT box, with six of the eight probes monitoring individual cylinder exhaust gas temps for datalogging, as well as engine protection, while the other two monitor intake air temps.

“The Barras are pretty basic,” he says. “It isn’t a million-dollar bottom end; there isn’t a tonne of crazy work in it. What you put on the outside to make power is more important than exotic internals, and the base motor doesn’t cost a lot, unlike 2JZs now.”

Behind the Barra is a Hughes Performance bolt-together converter and transbraked Reid-cased TH400, with a nine-inch diff hanging off a ladder-bar rear end that replaced the stock Toyota IRS set-up.

“While it doesn’t look like much has changed over the years, the whole combo is pretty much new compared to the last DCW,” says Benny. “I have a different diff and converter, plus we’ve got new Shockworks front struts instead of the $70 Monroes it went 8.1 on, and we’ve raised the ride height so it doesn’t do wheelies or smash pans. We haven’t raced it, so hopefully we don’t go backwards!

“The goal for Drag Challenge Weekend is to attend, firstly, and then to finish the weekend,” Ben says. “If I can nab a class win, that’ll be great, but there are some big players in the Six-Cylinder class, so I’m wondering if I’m bringing a knife to a gun fight.

“It’d be nice to run a seven, but we’ve had so little track testing time and I really just want to go to the track for a start. We’re also entered in Summernats Slam, which I think will be a cool event. I’m really interested to see drag racing mixed in with some Summernats flavour.”