DRAG racing is a sport best served dry, so when grey Victorian skies opened up on Heathcote Park Raceway just before the Australian Ford Forums Nationals were to be held there, the outlook for the weekend’s racing was a bit bleak.

For the past 11 years, the Australian Ford Forums have partnered with Heathcote to put on a drag event for their members over the Queen’s Birthday weekend. At this time of year, the temperature at Heathcote hovers around the ‘pretty cold’ mark during the day and drops to ‘bloody freezing’ at night. Nevertheless, you’ll always find more than a few ladies and gents from all over the continent making the trek to Heathcote, some even camping in the pits. They dress in layers and huddle around glowing fires, just waiting for a taste of sweet drag racing action. 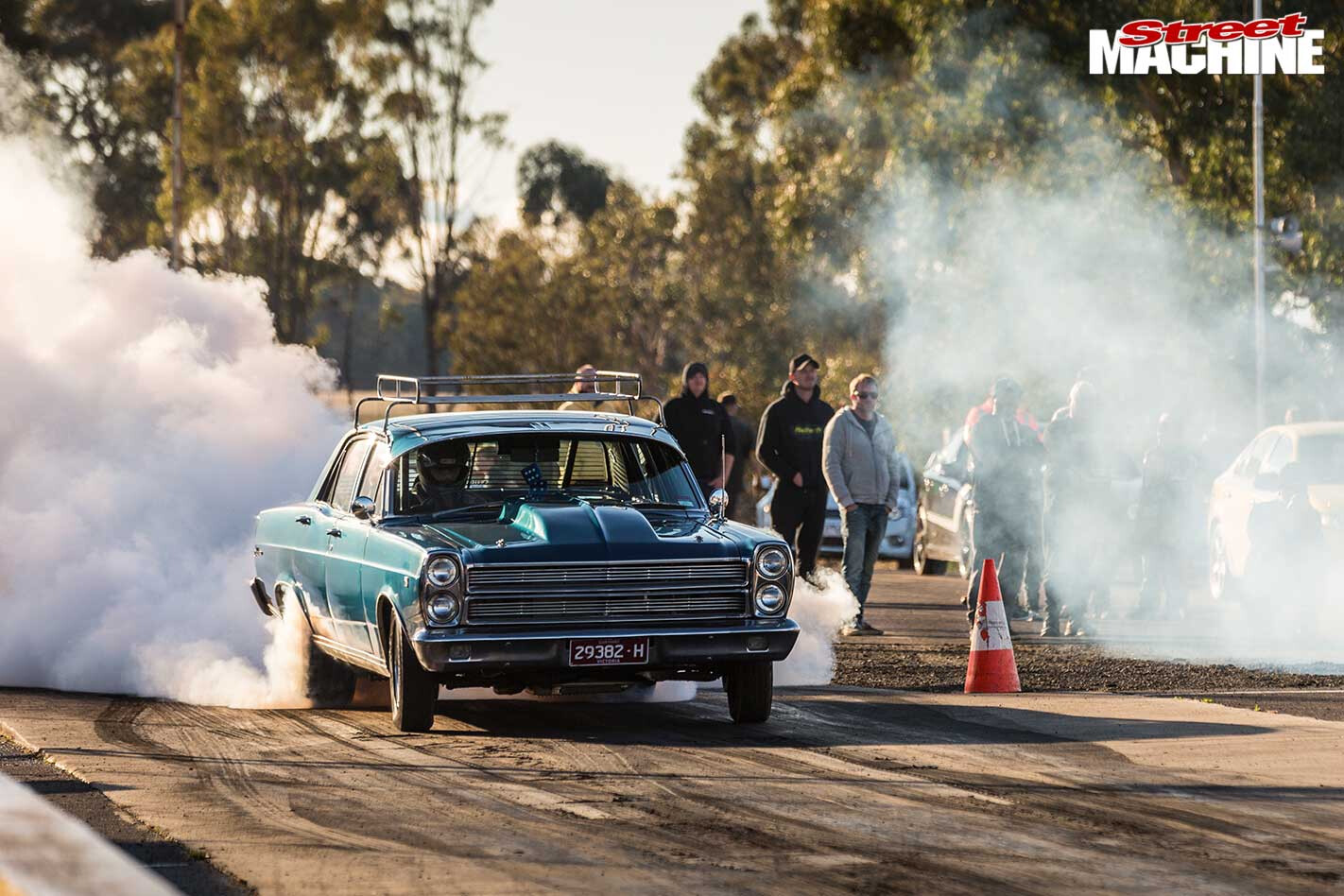 The usual schedule is test ’n’ tune on Friday arvo, more testing on Saturday morning, and racing from lunchtime onwards. The format is a DYO Chicago shootout, and the classes are split by dial-in into 8.00-10.99, 11.00-12.99 and 13 & Over, along with an Outlaw class for any car that’s not running a Ford engine.

MORE Our top ten at the Ford Forum Nationals

The AFF Nats has gone from a small meet to having almost 100 entrants at this year’s event. Though most were from Victoria, there were quite a few who made the journey from SA, NSW and even Queensland to compete and catch up with friends. It’s certainly one of my favourite aspects of the event – there’s a bunch of fellow Blue-bloods from Canberra that I enjoy having an annual chinwag with. The atmosphere at Heathcote is always warm and friendly, even if the drizzle and frozen ground aren’t. It’s one of the many reasons even the Queenslanders are happy to forgo their warm variety of rain for the frigid Victorian stuff! Unfortunately, this year the rain really set in on the Friday, so much so that the track was soaked and the test ’n’ tune was called off. Saturday dawned with clear skies and no wind, but the track simply refused to dry out by lunchtime, so both lanes were opened up for a continuous parade of race cars to warm things up and lay down some fresh rubber. With more than half the day gone, a vote was taken and the decision to scrap the DYO racing was made. Instead, entrants were invited to test ’n’ tune, and the staging lanes filled with racers eager to have a crack.

Whoosha, a Ford Forums stalwart and co-organiser of the event, made the best of the situation. “We’ve done really well to only get washed out once in 11 years of holding the Nats,” he said. “When we realised we wouldn’t have time for both testing and racing, I asked everyone which they’d rather do. Most said they’d rather just make as many passes as possible, and it wouldn’t be fair on the interstate guys if they got knocked out after only one run. So we just ran test ’n’ tune for the rest of the day. Plus, it’s not every day you get to chuck laps both ways on the quarter!” 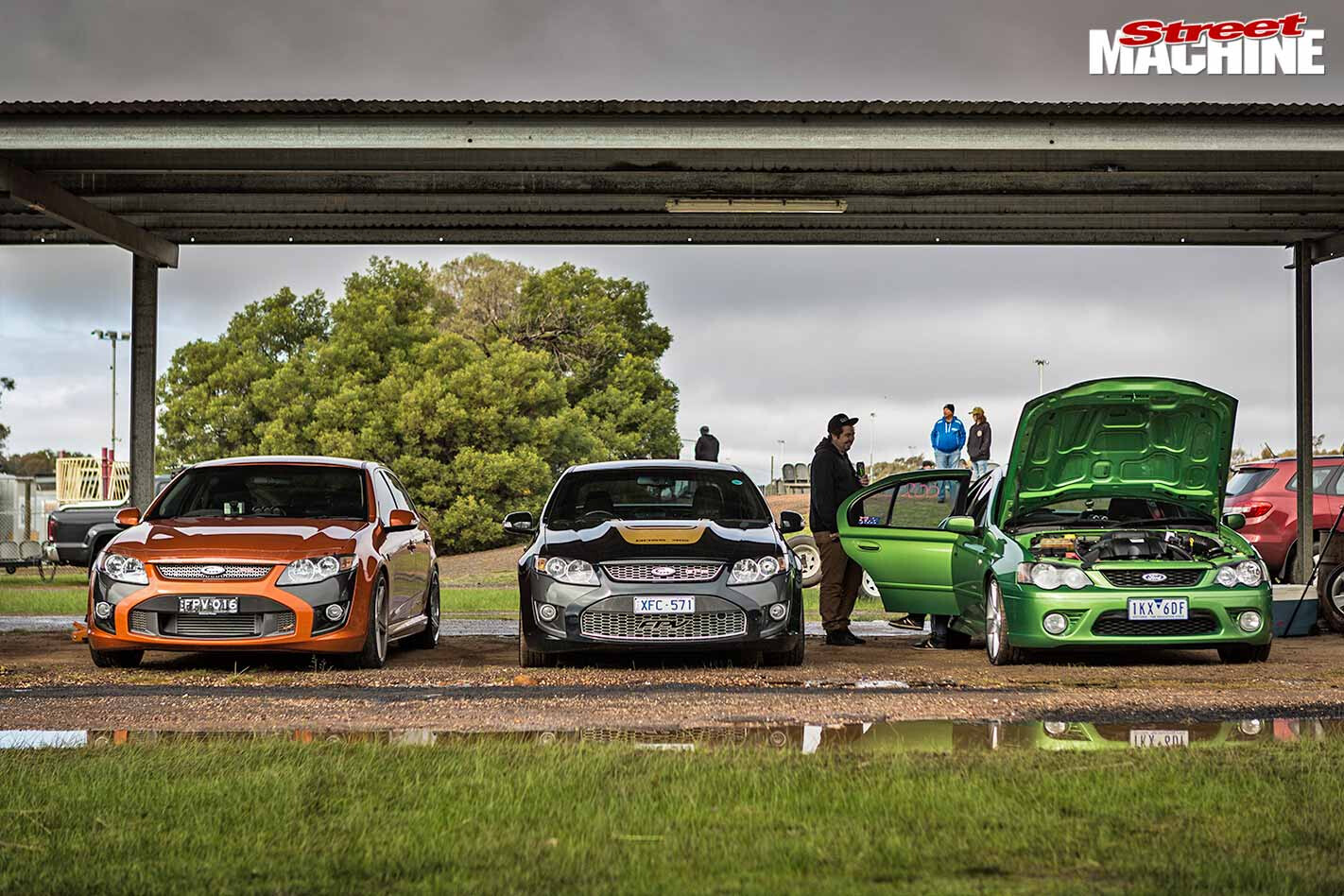 The cars were predominantly Falcons both old and new, though there were quite a few Aussie Fairlanes rocking decent mumbo as well. Boosted Barras were a common sight, thanks to their ability to make easy power and their practically bolt-in fitment for older Falcs, but there were more than a few racers flying the worked SOHC flag, too. As with any event where old Fords congregate, the air was filled with the snarls of angry Clevos and Windsors. Due to the soggy weather, every car wore sprays of mud along its flanks.

With the dew setting in quickly in the evening, the AFF Nats was done and dusted for another year. While most racers packed up and headed home, some stayed for the test ’n’ tune the next day, when the weather (and the track) would be kinder. Planning to stay the extra day is definitely a hot tip – and you can also check out the Mid-State Mopars event in neighbouring Bendigo.

Hopefully next year’s event will be a return to the Nats of old, with chilly air, bench-racing around campfires and plenty of PBs. 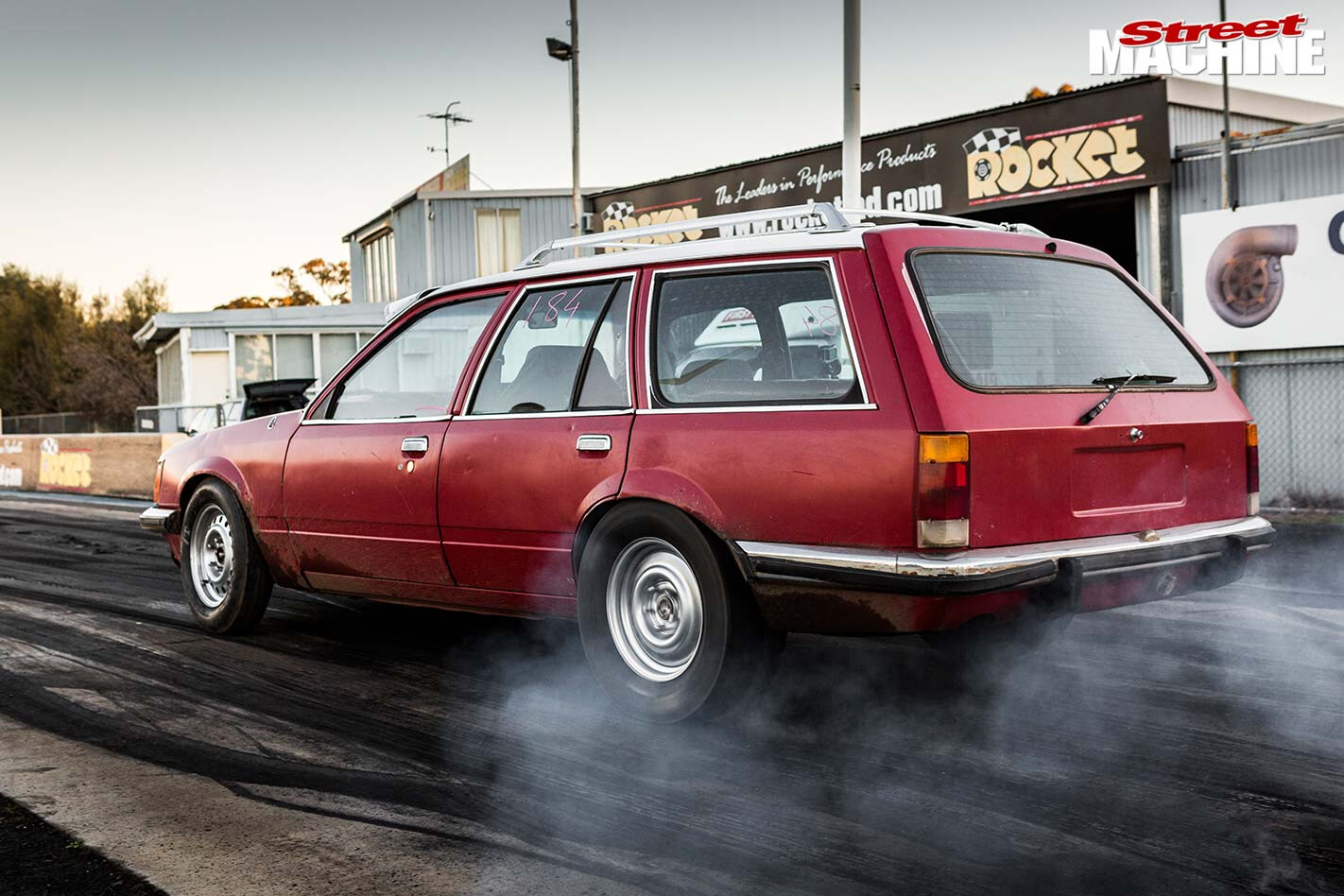 1. It may be a Commodore, but turbo Barra power meant Kyle Breed’s VH wagon was welcome at the Ford Forums drags. Built for just $4K, the stocker engine runs a GT45R turbo and runs through a rebuilt BTR auto. “I’ve done 60 passes in it as it is; it’s been on the burnout pad and we paddock-bash it. I drive the arsehole off it and I’ve only changed the oil once,” Kyle laughed 3. James Facey, his dad and a bunch of mates decided to try their luck at racing on a really tight budget with this EA S-Pak. “It’s bone-stock, and we threw in an old Snort turbo kit and some scrap bits we had in the shed,” James said. “We put it together in two weeks.” Unfortunately the 191,000km motor didn’t like having boost shoved into it and promptly popped the rear main out before it could even make a pass 4. Brett Seymour bought this evil XA sedan as a shell 18 months ago and has transformed it into a stomper. Power comes from a 560rwhp, 427ci Windsor with Kaase heads, screwed together by ZOX Performance. The XA’s current PB is 10.2@134mph, recorded at Willowbank 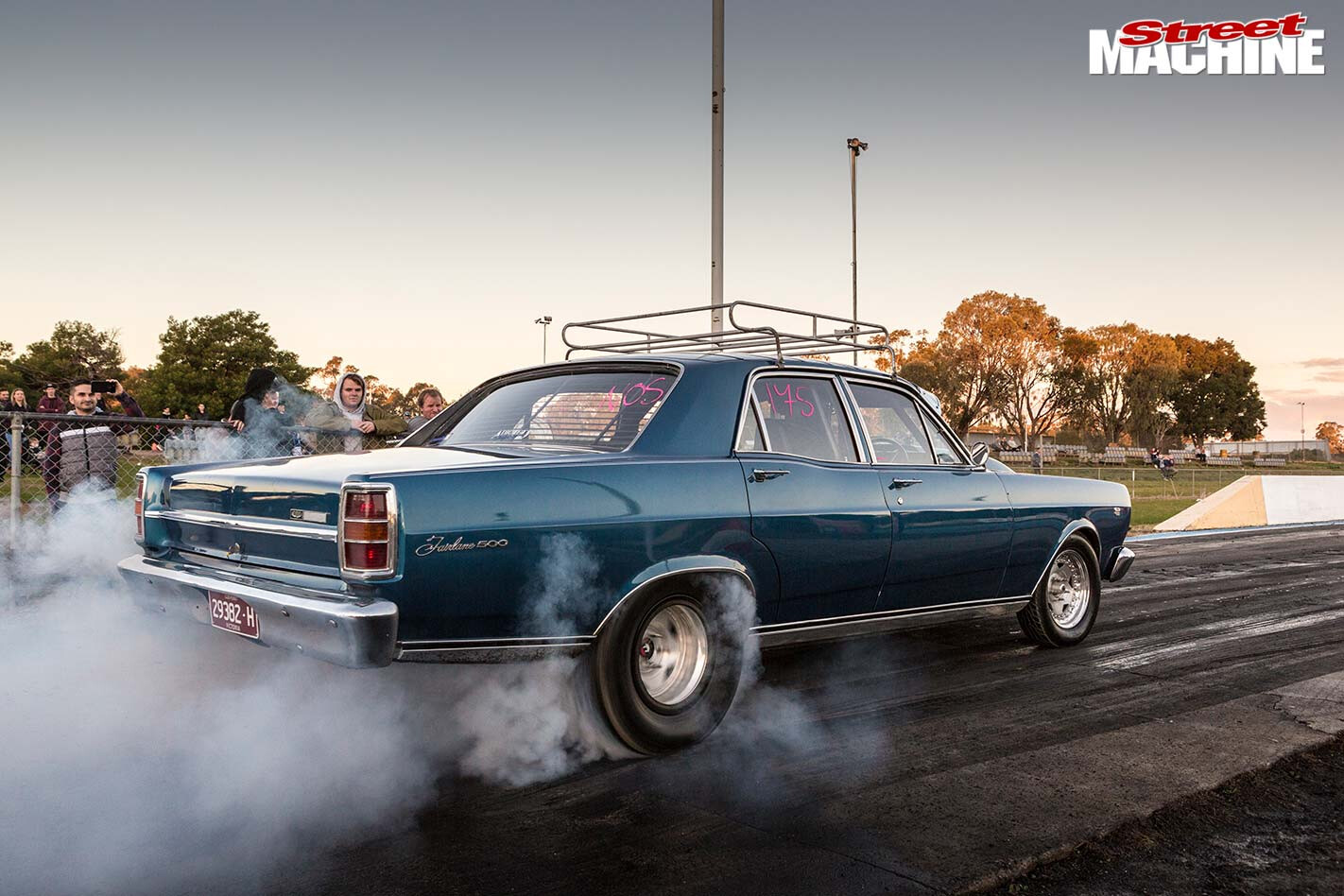 5. Greg Richards and Laura Pendlebury were out in the ‘Fairly-Fast-Lane’ ZC Fairlane for their first passes since Drag Challenge 2017. The big beast is running a new combo, with a 427ci Dartbased Windsor backed by a transbraked AOD four-speed auto. Greg is hoping the car will dip into the nines before long 6. With Scotty busy behind the wheel of the Toxic Avenger Territory, Bubba Medlyn was deputised to pilot Turbo Taxi for the day. Bubba not only shouted us a set of fresh 275 radials, but was kind enough not to beat Scotty’s then-PB, running a tenth off that to record a best of 11.60@120mph. Thanks mate! 7. Ray Arbon’s AUIII wagon is one of the very last V8-powered Falcon longroofs ever made. Ray has upgraded his with a set of GT40P heads, a Comp cam, Pacemaker extractors and a Kenne Bell 2.1L supercharger. Ray ran a new PB of 12.27sec at the Nats 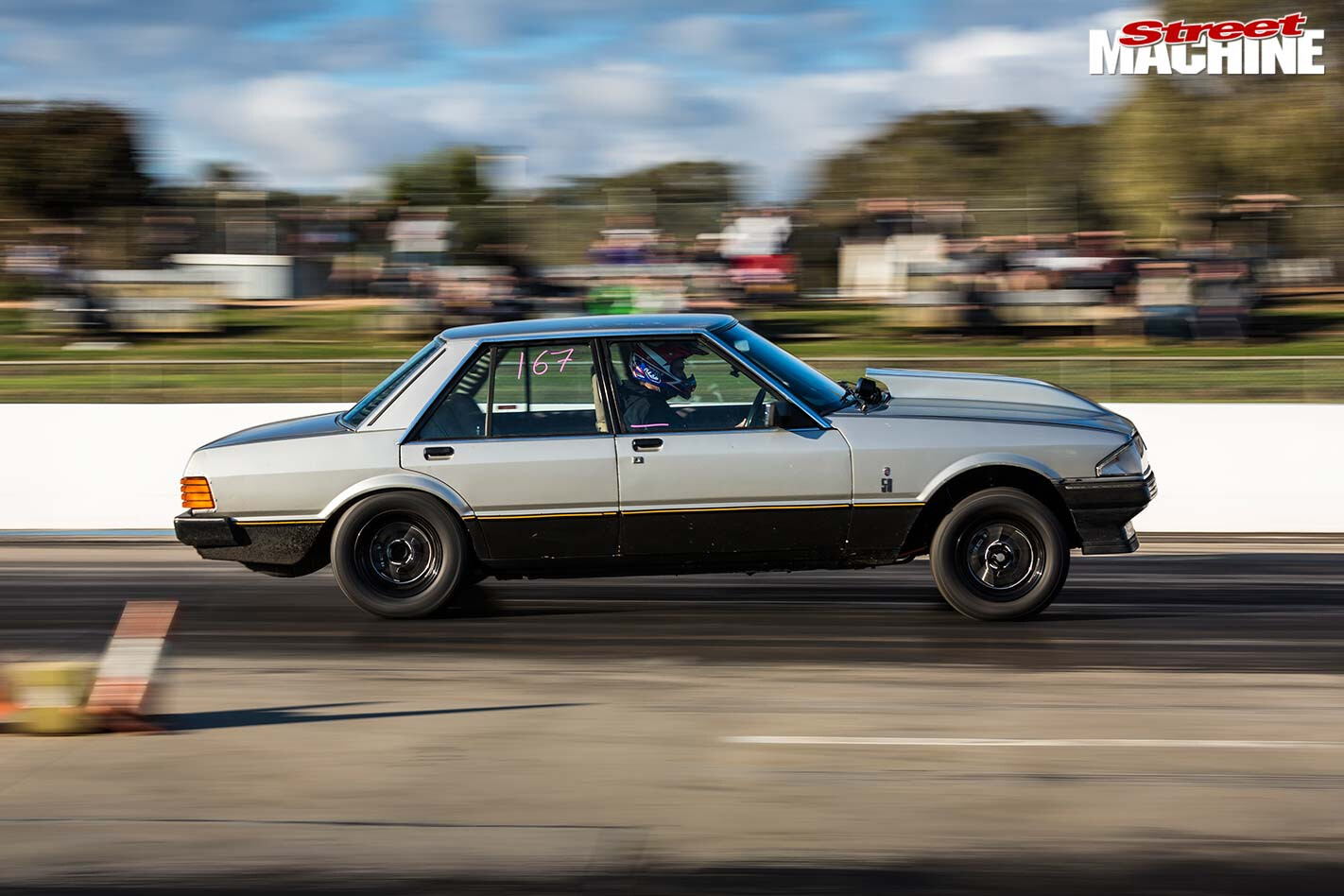 8. Paul Kent reckons his XE Fairmont is “a bit of a dunger”, but with an 11.3sec pass at the AFF Nats it certainly doesn’t go like one! The 351 Clevo runs a set of 4V heads, a dual-plane manifold and 750 Ultra HP carby. The secret sauce is a 100-shot of giggle gas, and the 4.11-geared BorgWarner diff helps as well 9. Danko Knezevic’s Capri has so far run in the 8.60s, putting the power down on leaf springs and 275 radials 10. Drag Challenge veteran Jarrod Wood had his immaculate XT Falcon (SM, May ’18) set to kill, running a best of 10.09sec – his best-ever pass at Heathcote 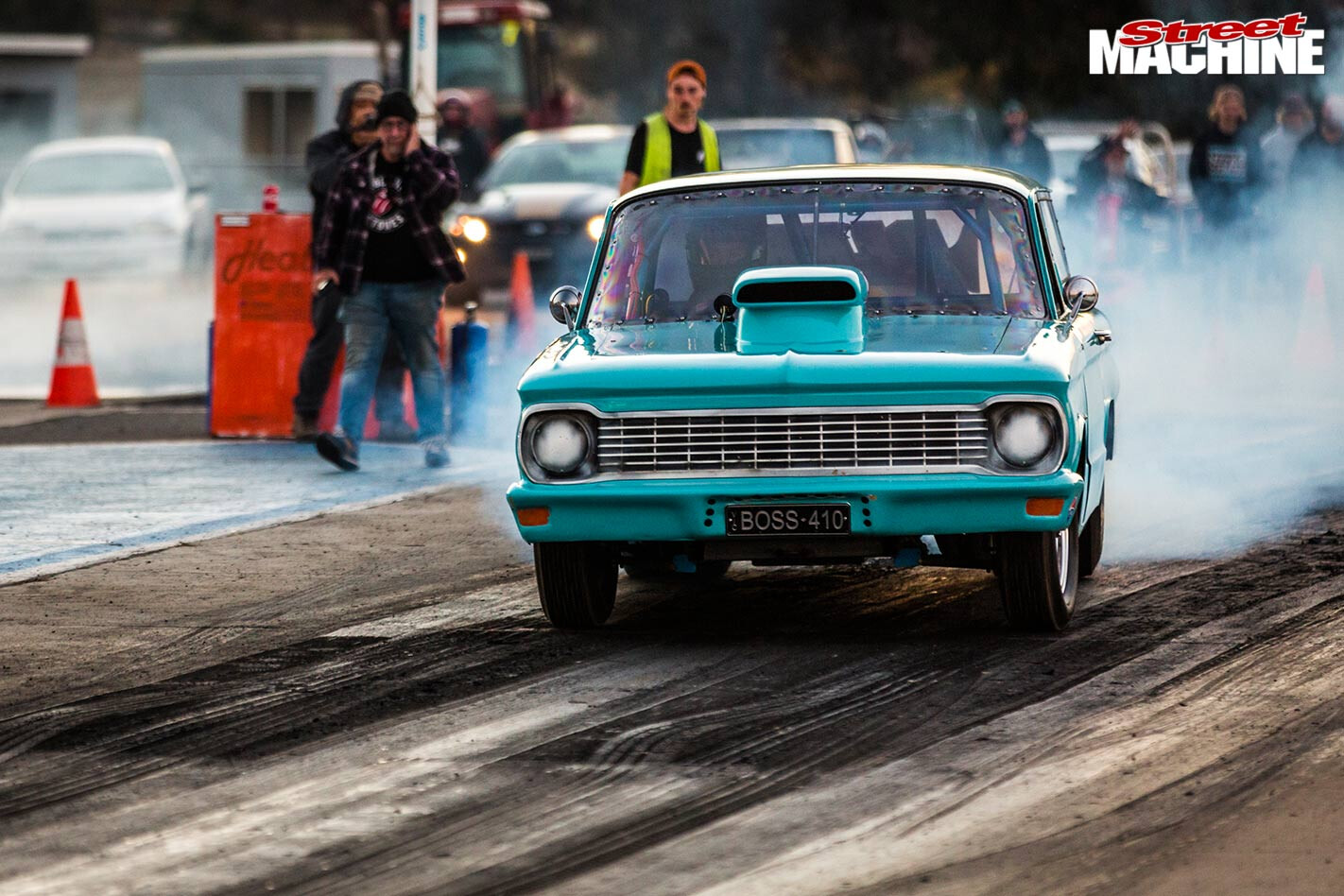 12. Whoosha has been involved with the Ford Forums and the Nats for years. His TE Cortina has served duty as both a drag car and a skid pig, and the current bottom end is an AU 5.0L, with Edelbrock Performer heads, Victor Jr intake and 650 double-pumper. Whoosha’s PB is 12.78sec 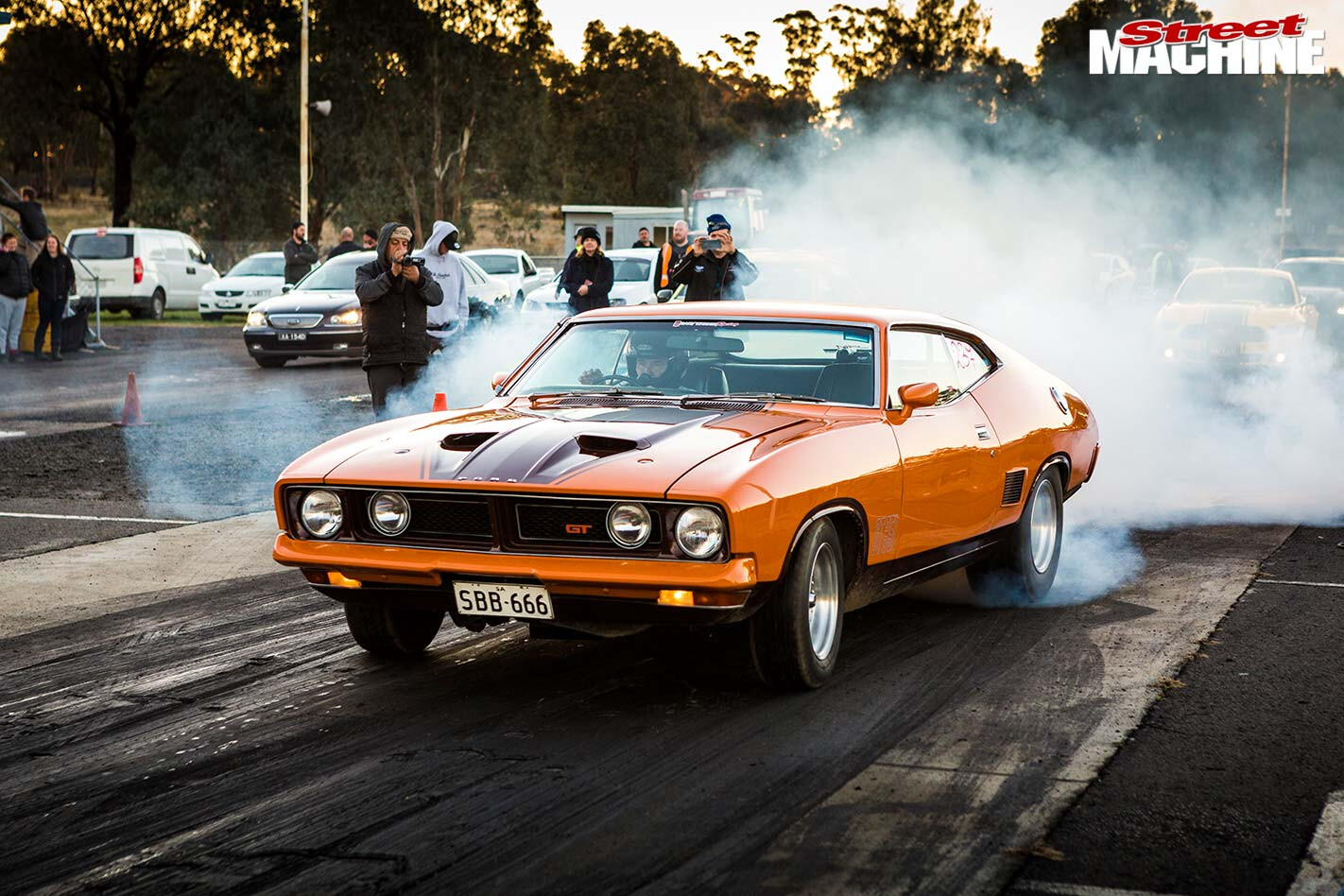 13. Sean Johnson has owned this sweet XB for 28 years; 26 of those with a big-block under the bonnet. The new motor is an SVO-block 572-cuber with a Scat crank and rods, Blue Thunder heads, Trick Flow single-plane and SV1 carby. The old motor’s PB was 10.47; Sean is now hoping to dip into the 9s 14. This sanitary TC belongs to SA’s Nick Efthimiou, who has run a 10.9@126mph PB in the little moredoor. Underneath those straight white panels is a classic quick-Cortina combo: 302 Windsor, C4 and 9in, with an anti-roll bar and adjustable shocks