This article on Brentyn's coupe was originally published in issue no.18 of the Street Machine Hot Rod magazine

IF Brentyn Wakefield’s mug looks familiar, you’ve probably seen him hosting the My Garage Rules program, which has a definite hot rod bias. Brentyn’s love for the modified four-wheelers started as a kid, when his dad towed him around rod shows, but it wasn’t fully cemented until his mid-20s. 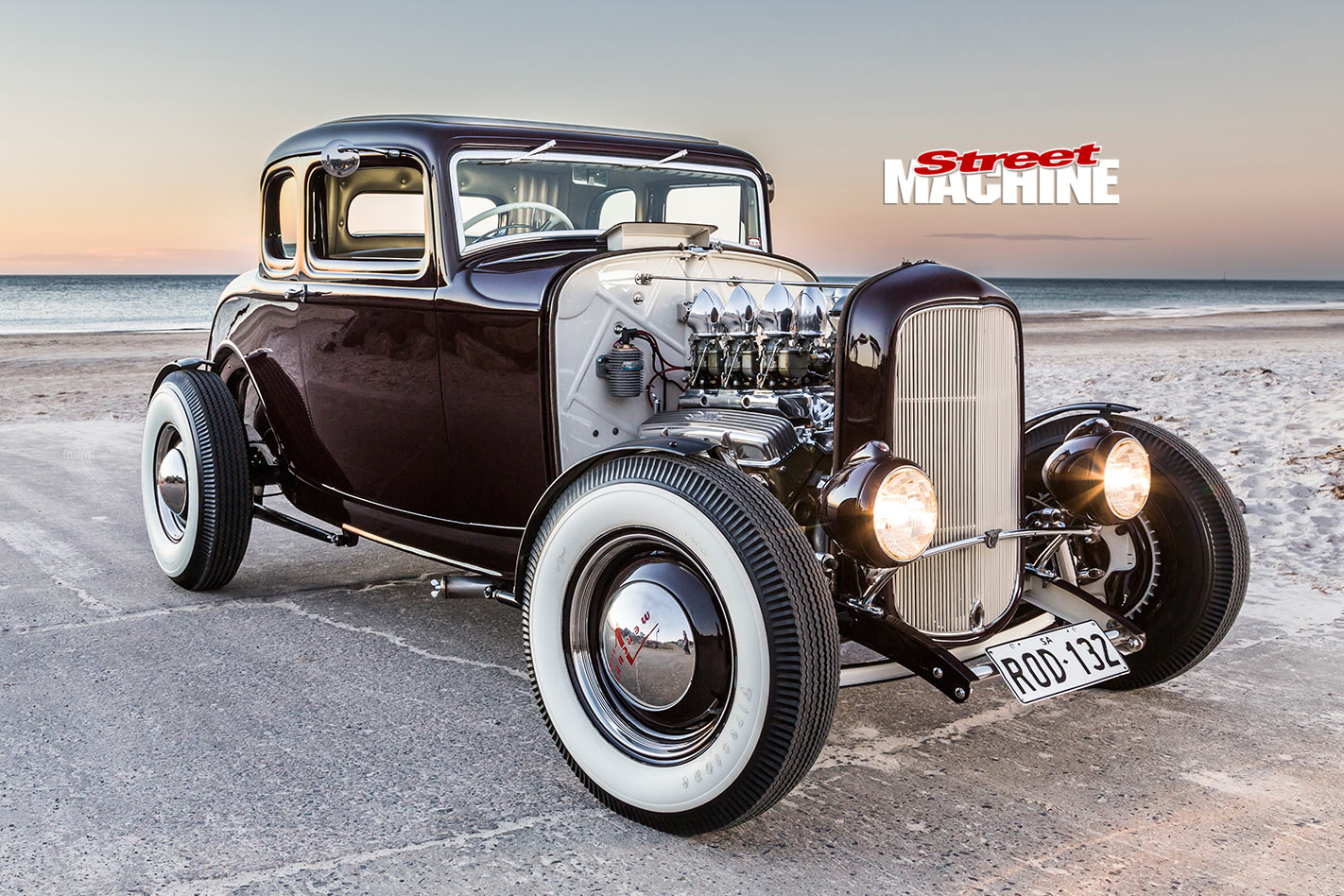 “I was offered a ride in a T-bucket at the Great Aussie Rod Run,” Brentyn recalls. “That was it; I was hooked!”

Based in South Australia, he refined his tastes over many years of ogling the local Rebels Hot Rod Club cars before Bill Mussett’s black ’32 three-window coupe became an object of desire, providing inspiration for his own build. 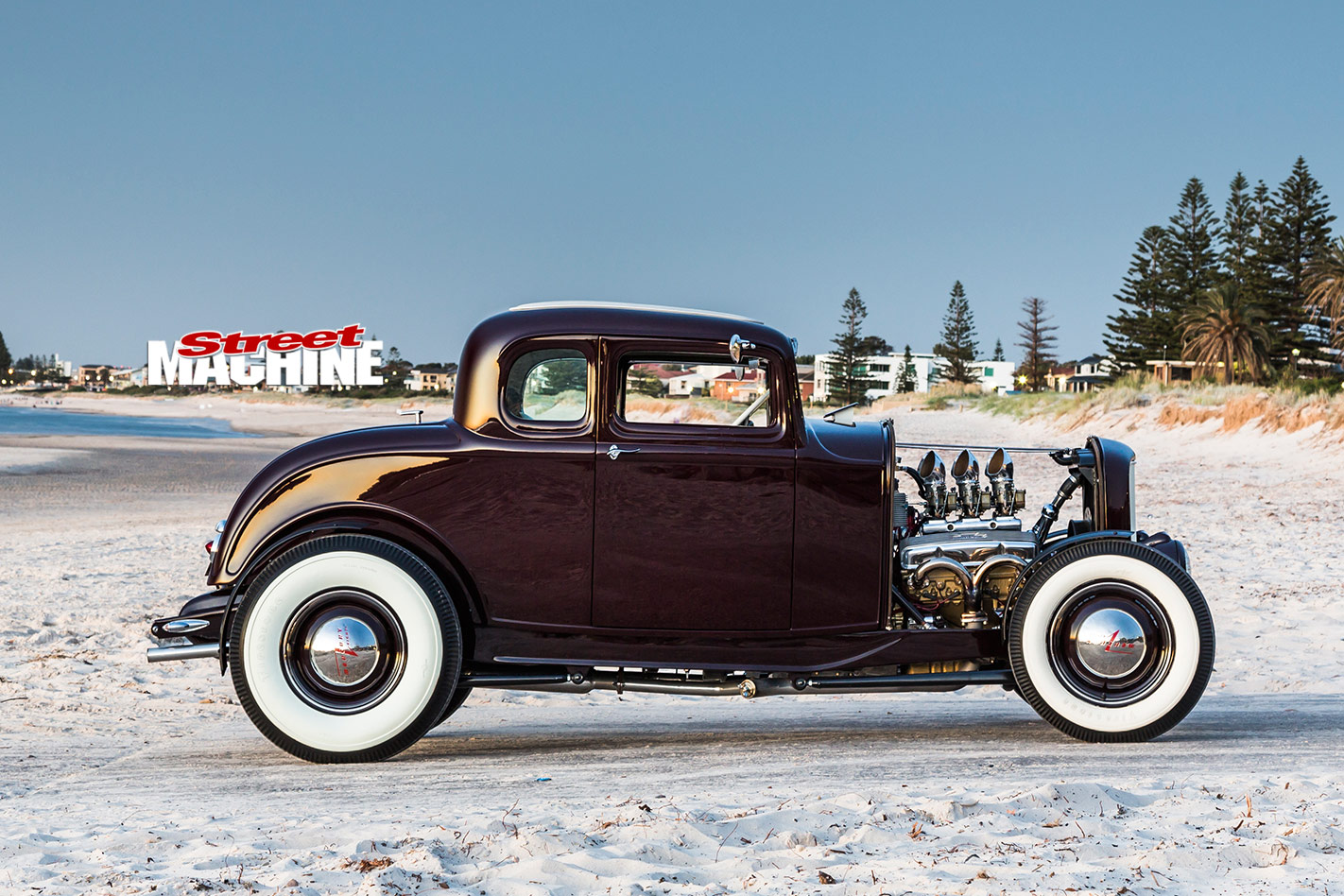 Brentyn says he tracked down John Mearns of Acme Speed Shop to ask about the colour. "He not only told me, he also posted a small piece of painted metal – I was blown away by the kindness. That’s why I now call the colour ‘John Mearns Maroon’

In 2005, he flogged off his VC Valiant sedan to finance his dream, but he worked from an unusual starting point. 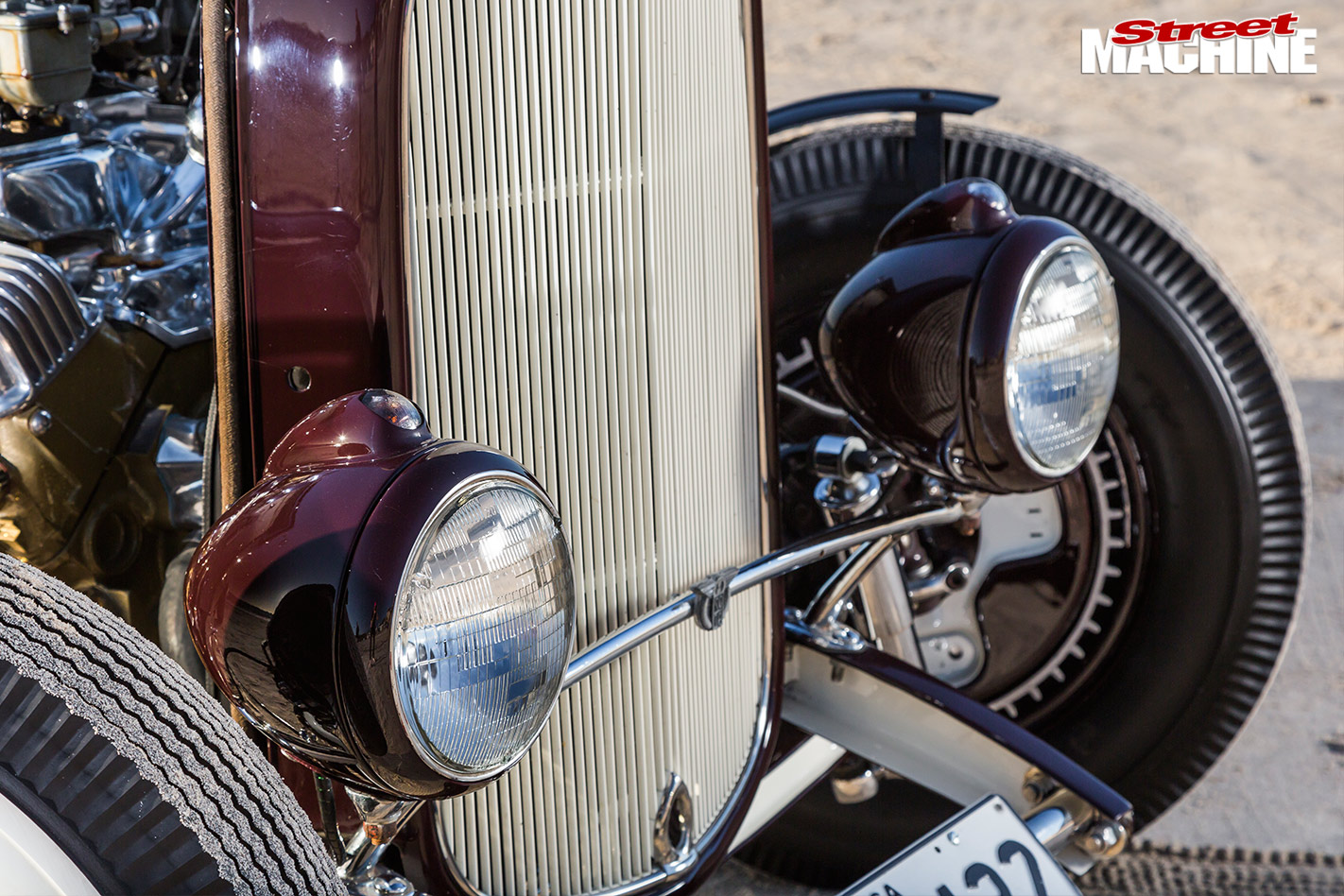 Headlamps are 682C Guides on a ’31 bar, while the indicators were robbed from an Austin 7. “Michael Ahrens suggested I remove the Super Bell logo from the front for a more traditional look,” Brentyn says. “I kept it on the back and had Travis Birmingham pinstripe it”

It wasn’t long before he tracked down an ex-drag car item in New South Wales, complete with 94 Holleys, which he later swapped out for 97 Strombergs.

Next, he commissioned Queensland-based C&W Components to build a ’32 chassis. On top, he opted for a Deuce Customs body after seeing them at an Adelaide car show. The rolling chassis headed to Dandenong, Victoria, where Deuce Customs provided a steeled-out ’glass ’32 five-window coupe with a steel Brookville front cowl vent and even a wind-down rear window for a period-correct feel. 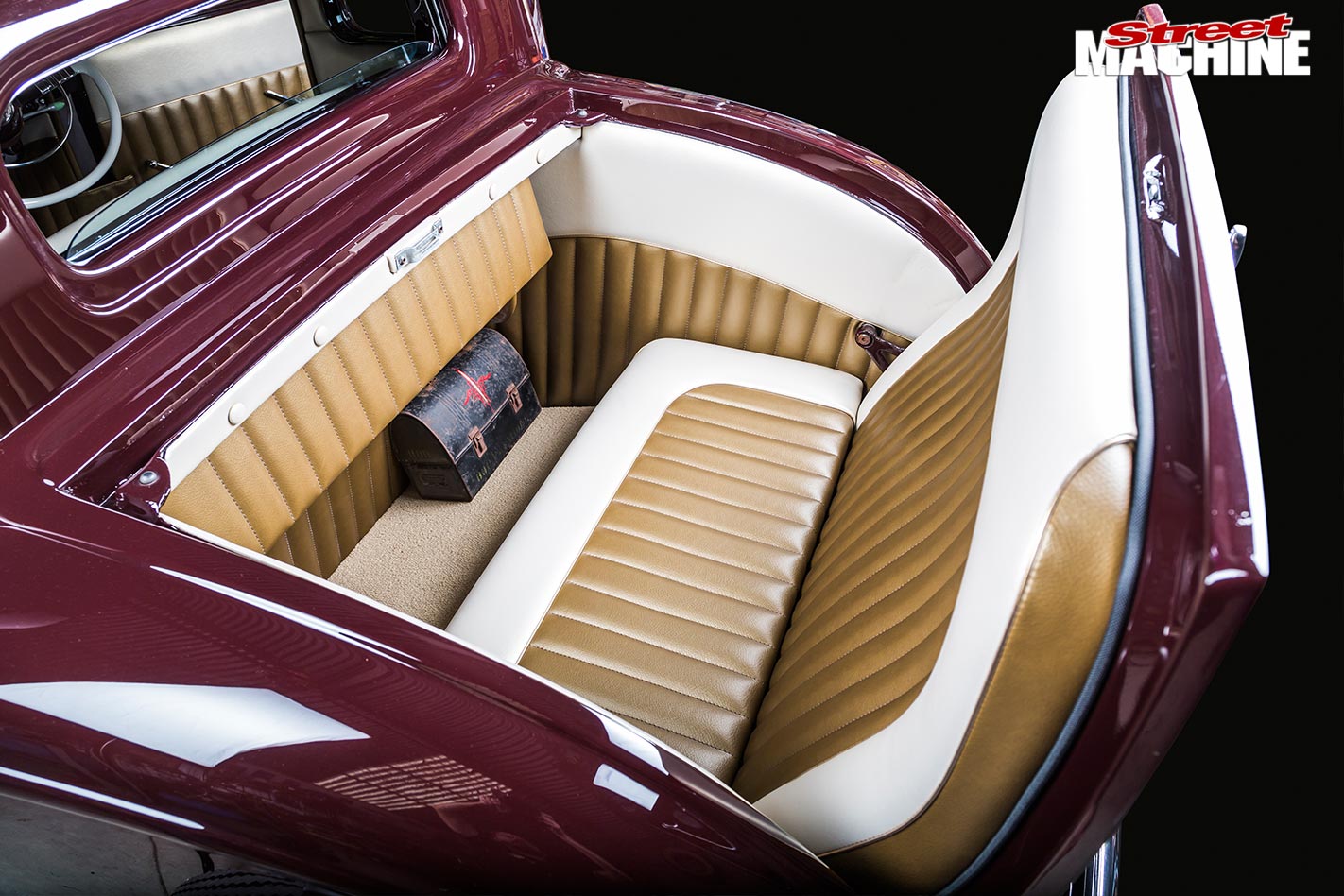 With the body and chassis mated, everything was going swimmingly, when life well and truly got in the way.

“My daughter Georgia contracted a cancer in the form of a brain tumour, so I stopped the build to concentrate on her,” Brentyn says. 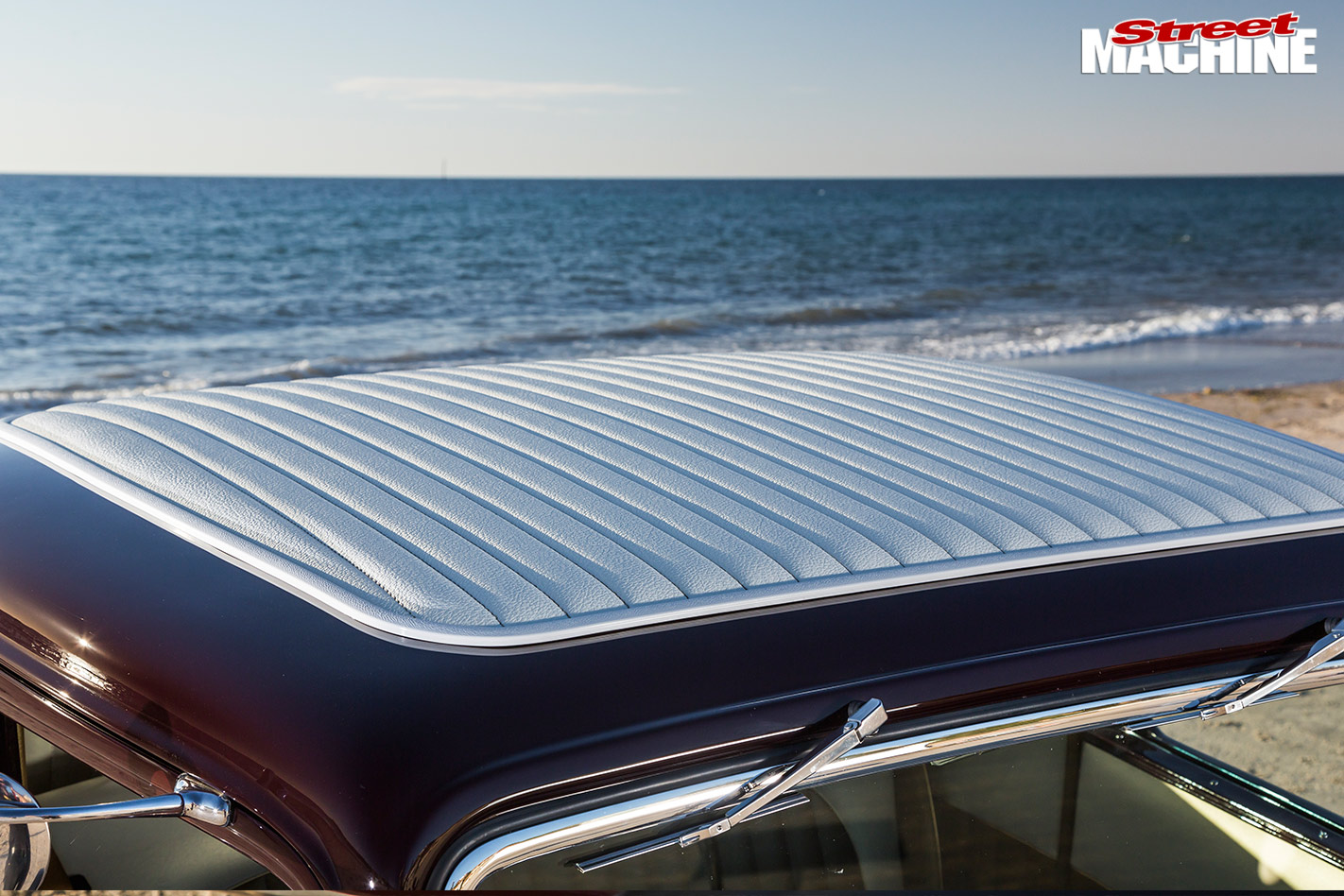 On top, Brentyn’s added a Juliano’s faux roof insert kit. “Michael and Ashley Cave even measured up an original ’32 insert, then replicated the exact measurement on mine,” he says. “It’s a black vinyl kit, which didn’t suit my white theme. Trying to find white capping was near impossible, but through the HAMB I was put onto a boat company in Florida that had one roll left”

Thankfully, Georgia fought off the big C over a period of a decade and is now a happy 16-year-old, albeit with a disability. Once things started to look up for Georgia, Brentyn’s thoughts turned back to his ’32.

It helped that mate Michael Ahrens gave him a nudge-along to get the coupe completed. 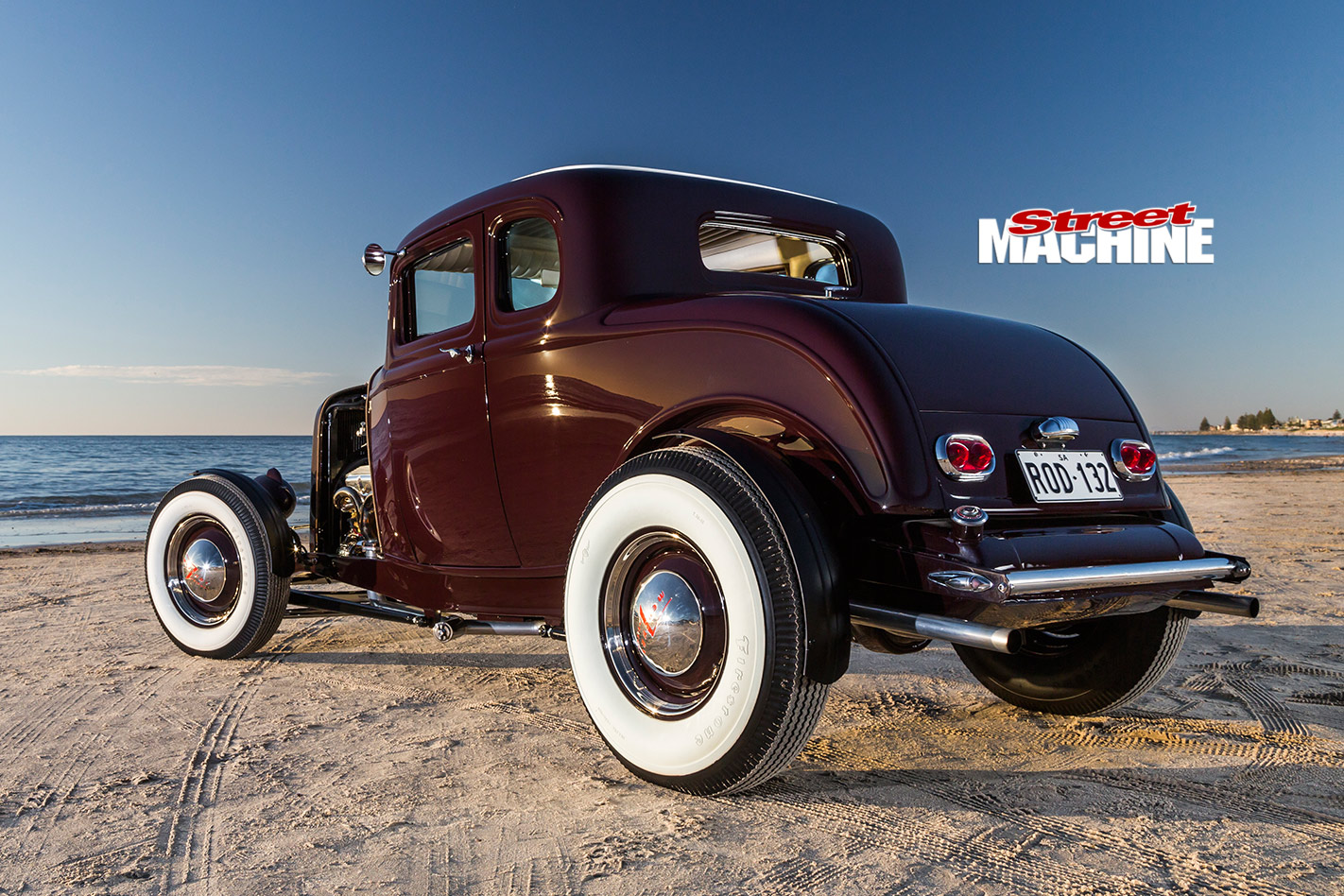 A ’52 Buick was relieved of its tail-lights, while indicators were previously on an Austin A30. The fuel cap is an original Dual-Loc Jr gasoline cap – a 50s aftermarket accessory

“Michael said: ‘We have got to get this hot rod on the road; you need a hot rod,’” Brentyn laughs. “He soon came over to go through some ideas of what I wanted and what could be done. He was a great motivator; I can’t thank him enough.”

Michael adds: “I’d like to think that I helped bring to life the picture in Brentyn’s mind of his perfect car.” 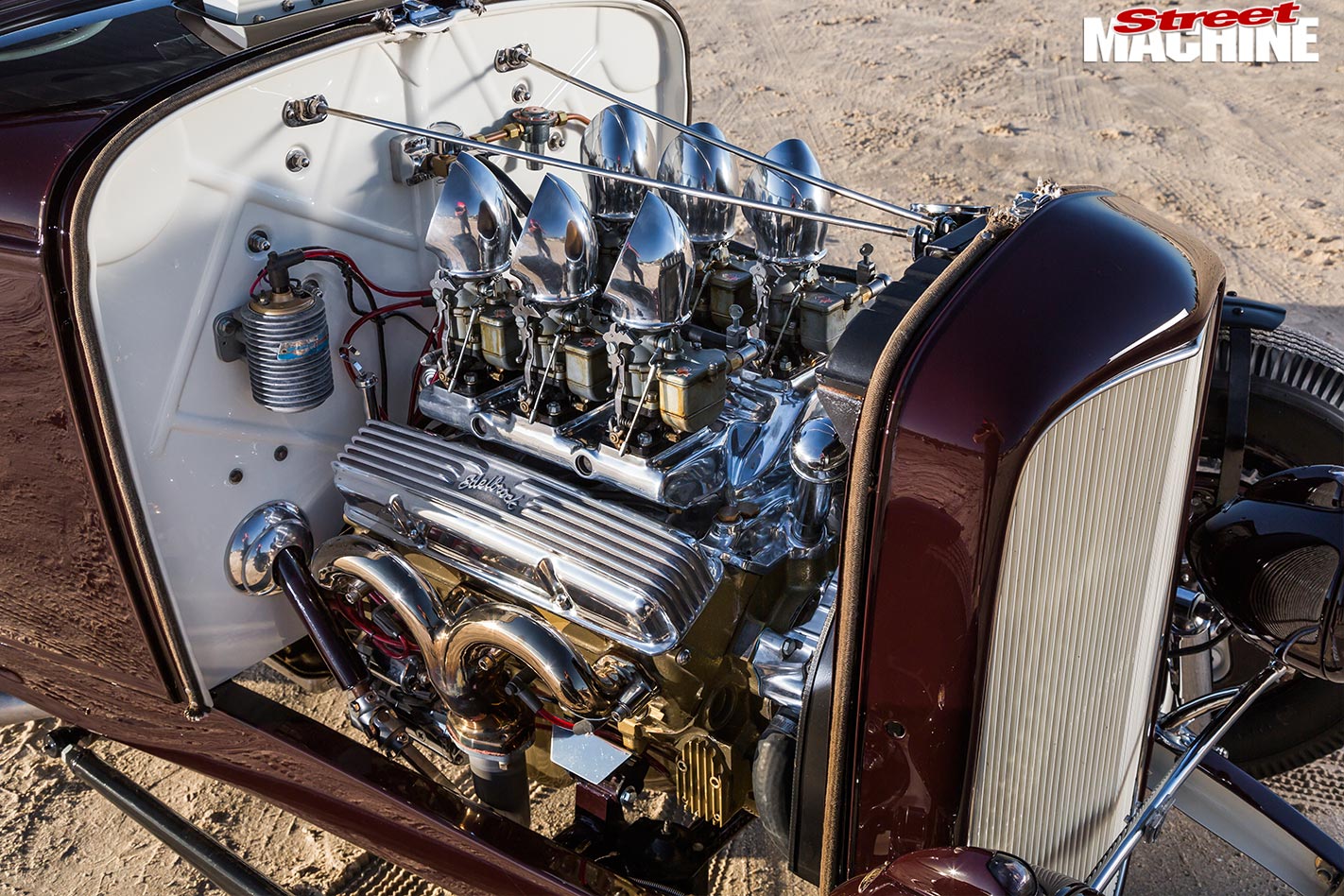 “I loved the X1 intake, as bigger is better and six carbs is over the top, and if you know me, you know I like being OTT,” Brentyn laughs. “I added six large-logo Stromberg 97s, which I bought locally then had rebuilt by Max Musgrove of 97-Express in Utah

Among the ideas that the pair bandied about was an overall traditional theme. 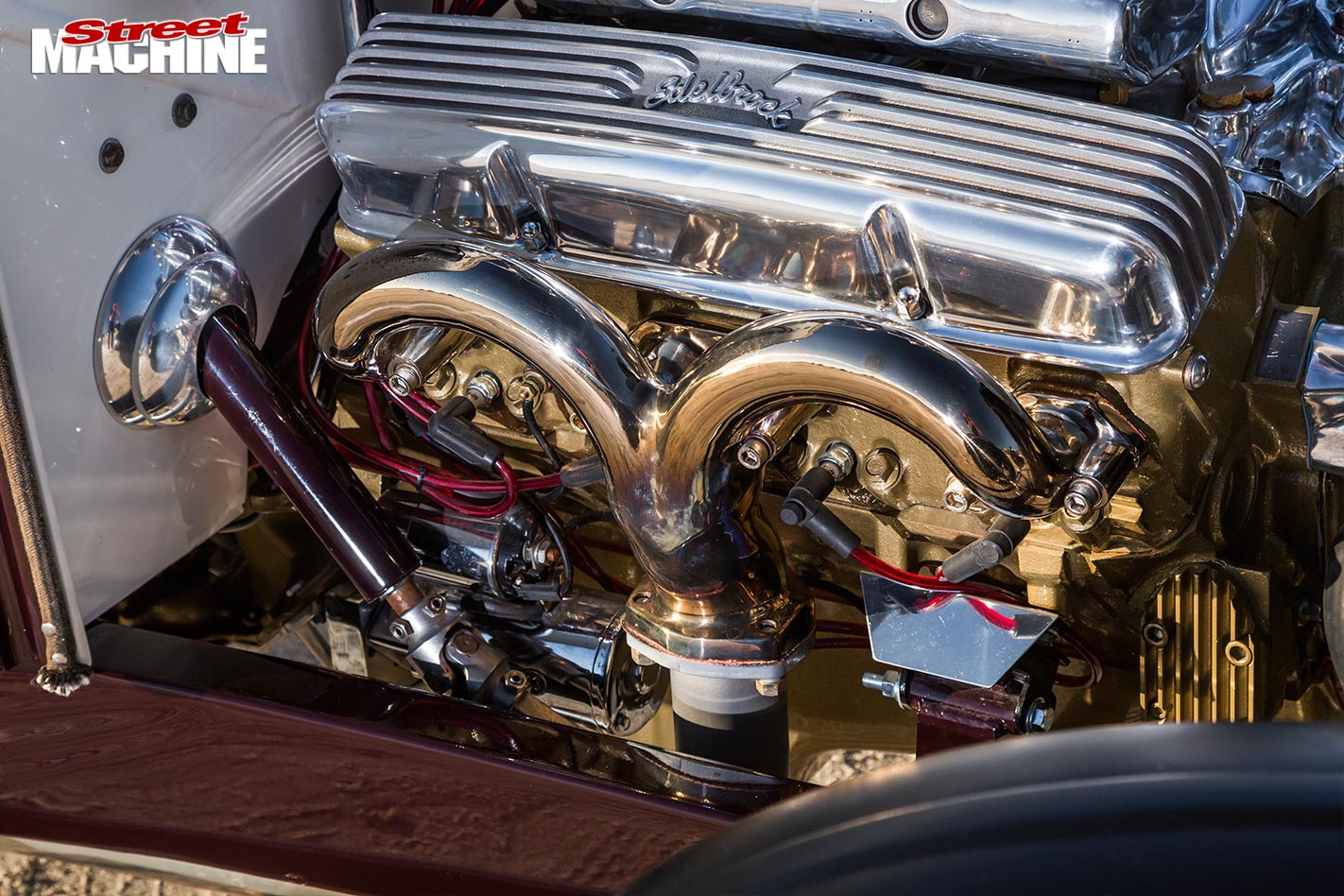 “To make the ’glass body look like it’s an old, traditional car I added pieces from the 40s to the 60s, and I purposely left the cracks in the chrome for character,” Brentyn says. “It had to flow from front to back so that it all tied in.”

A few alterations from the decade-old coupling were required, so the coupe went to Michael’s for tweaks. 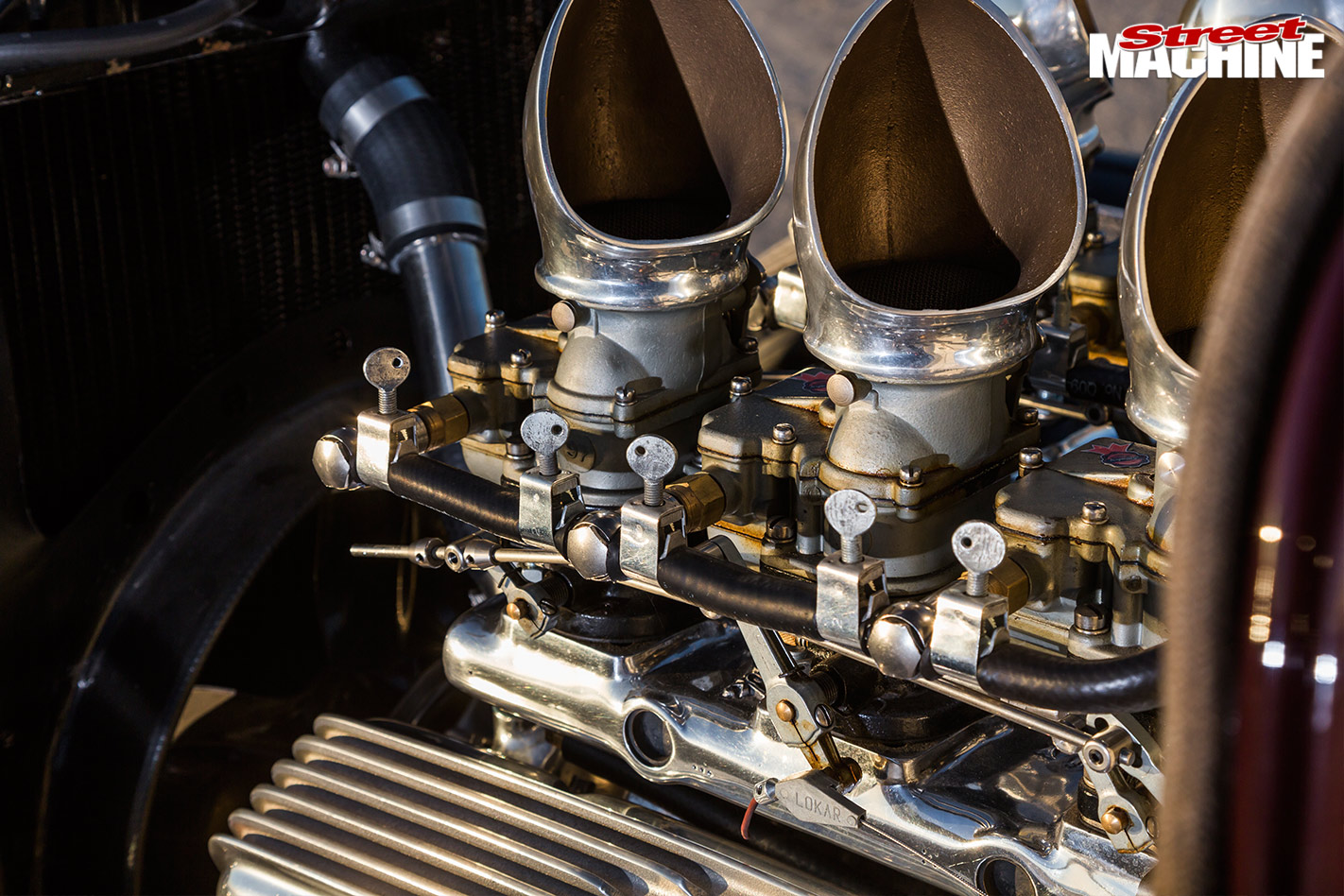 To get the 97s working, Clive from Stromberg noticed in one of my Facebook posts that my progressive linkage was going to foul with the fuel lines. So he sent me a pair of prototype fuel fittings for my centre carbies – they have a notch to clear the linkage. That was pretty rad!”

“We decided to swap the 46-inch front axle for a 48-inch, as well as adding an inch either side to the nine-inch diff, which allowed for cycle fender bracketry,” explains Michael, who also changed out the four-bars for split wishbones – ’40 Ford up front and ’28 Ford for bottom rear. Next was the exhaust; 2.5-inch to the corked party-pipes, then two inches to the back.

“I did a lot of small jobs, including drilling holes in all of the right places to make it look old,” Michael says. He then wired it up before it headed home for further fit-up. 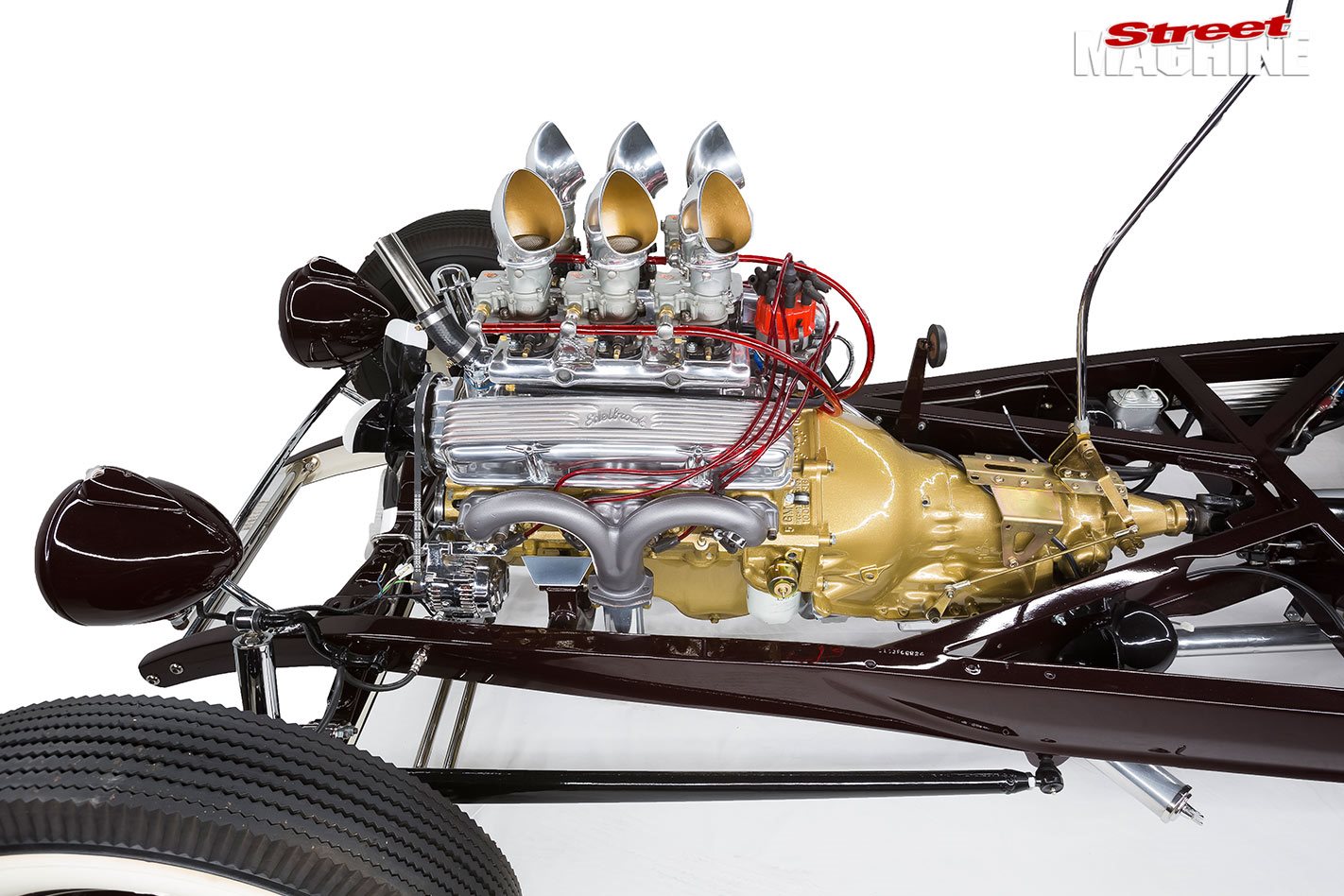 The vintage Blue Streak coil stealthily houses a Bosch electronic jobbie. And another sneaky item is the firewall-mounted Filt-O-Reg fuel regulator, which Brentyn has drilled out so a hidden Holley reg provides the required psi. An original Stewart Warner Motor Minder vacuum gauge is also mounted on the firewall

For the car’s heart, Brentyn went for a 350ci Chev cratey and had Stuart Lisk from Outlaw Speed Shop lend a hand with assembly. Behind, he’s bolted a trusty TH350 with a mild shift kit and a 2500rpm stall. 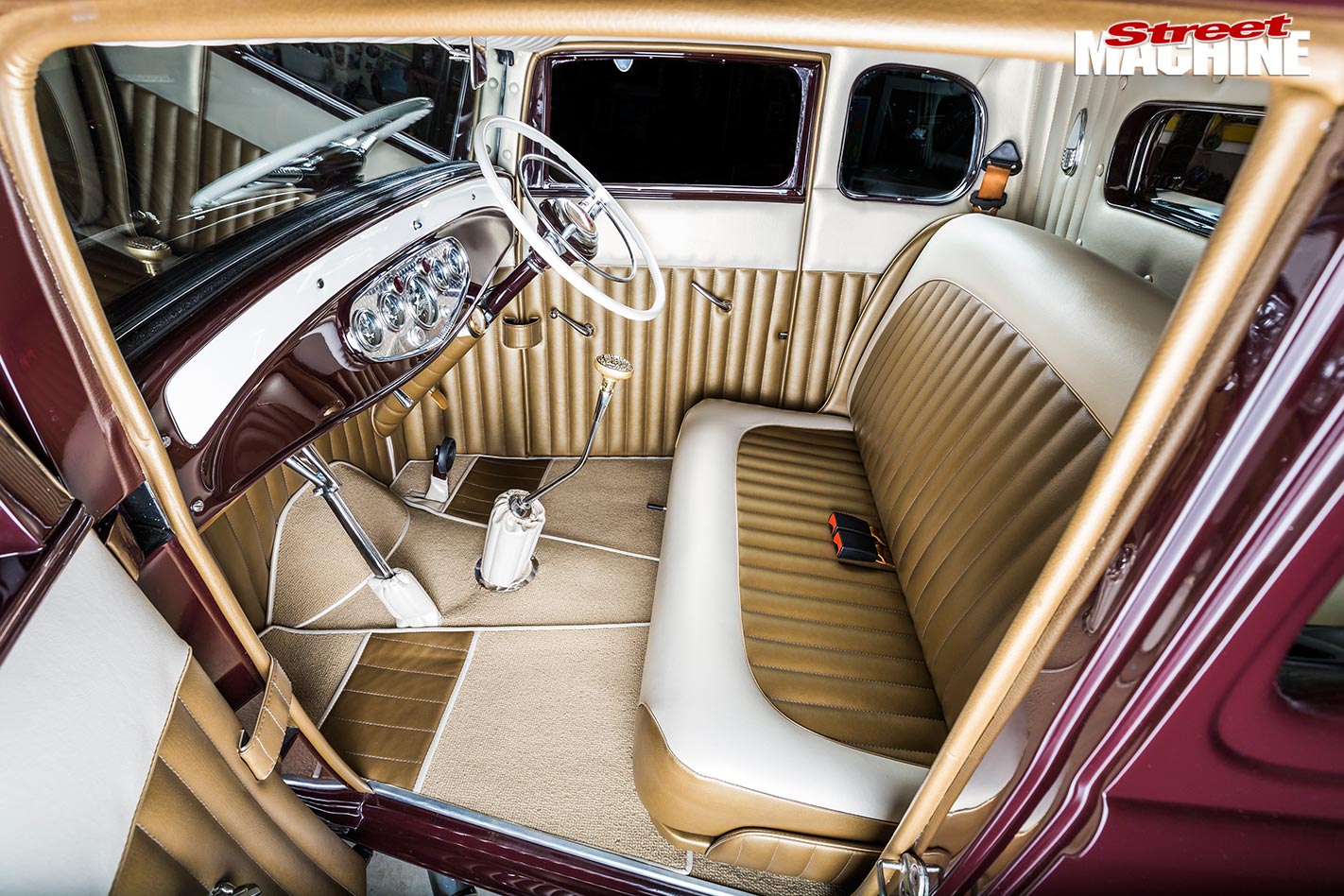 “There’s pleats everywhere; the gold headlining is made to look like the pleated roof, even the pedal and shifter boots,” Brentyn says

The brakes are a mix of discs and drums, though you need to look carefully to realise. Hiding beneath the Al Fountain Buick drum covers with ’40 backing plates are Rod-Tech discs, while a pair of 10-inch BorgWarner drums live out back. On all four corners are 16-inch ’40 Ford steelies with original ’40 Mercury V8 caps shod in Firestone wide-whites. 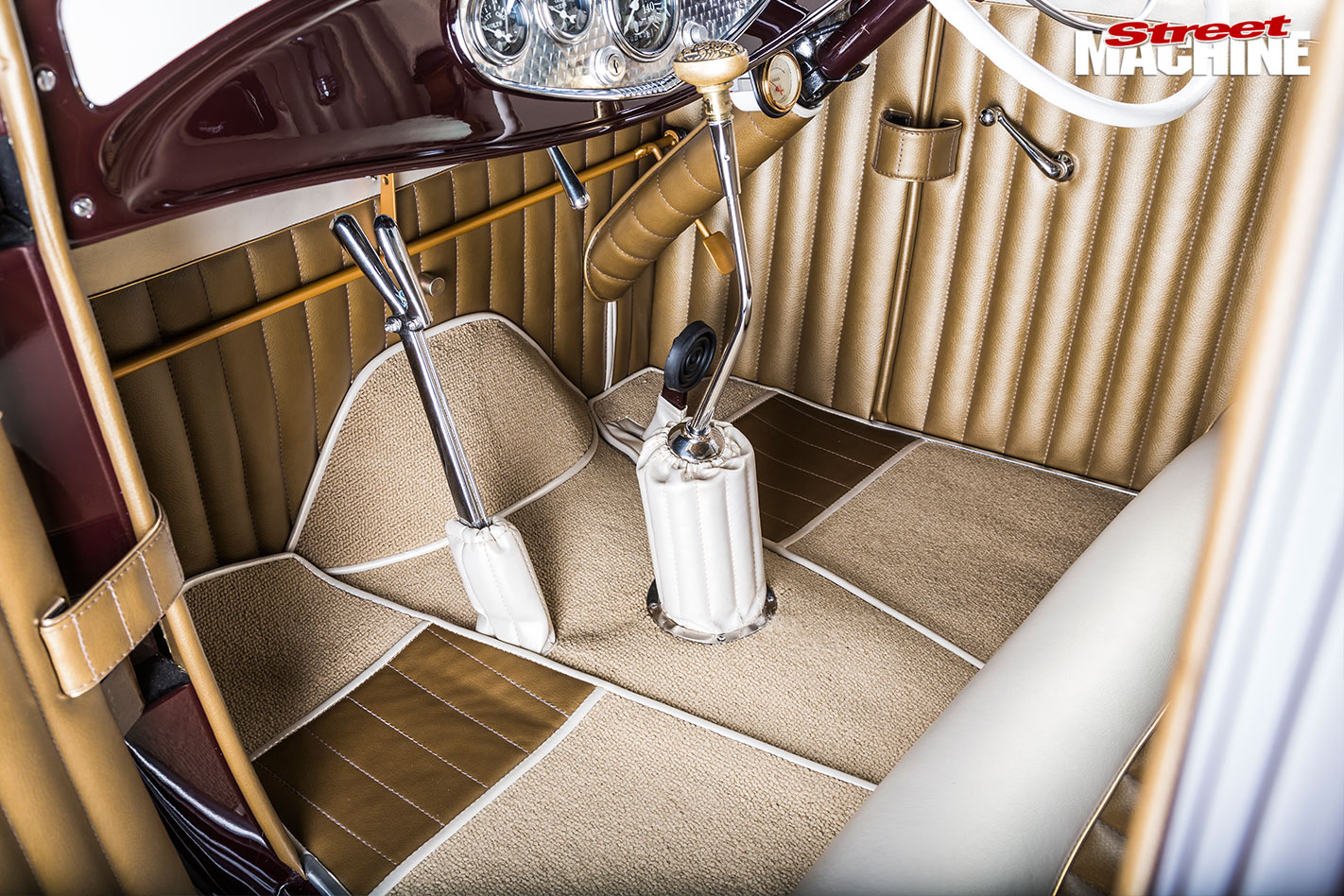 While those specs are certainly in keeping with many old rods, the piece de resistance with Brentyn’s ’32 is the colour. Given that there’s nothing new in the world of trad rods, Brentyn went with a hue he’d lusted after since viewing a 1936 Ford coupe on a Mad Fabricators DVD. While he’s nicknamed it ‘John Mearns Maroon’, it’s actually Bordeaux Red from a ’48 VW Beetle, teamed with Corinthian White. Auto Transformers was tasked with laying on the contrasting hues. 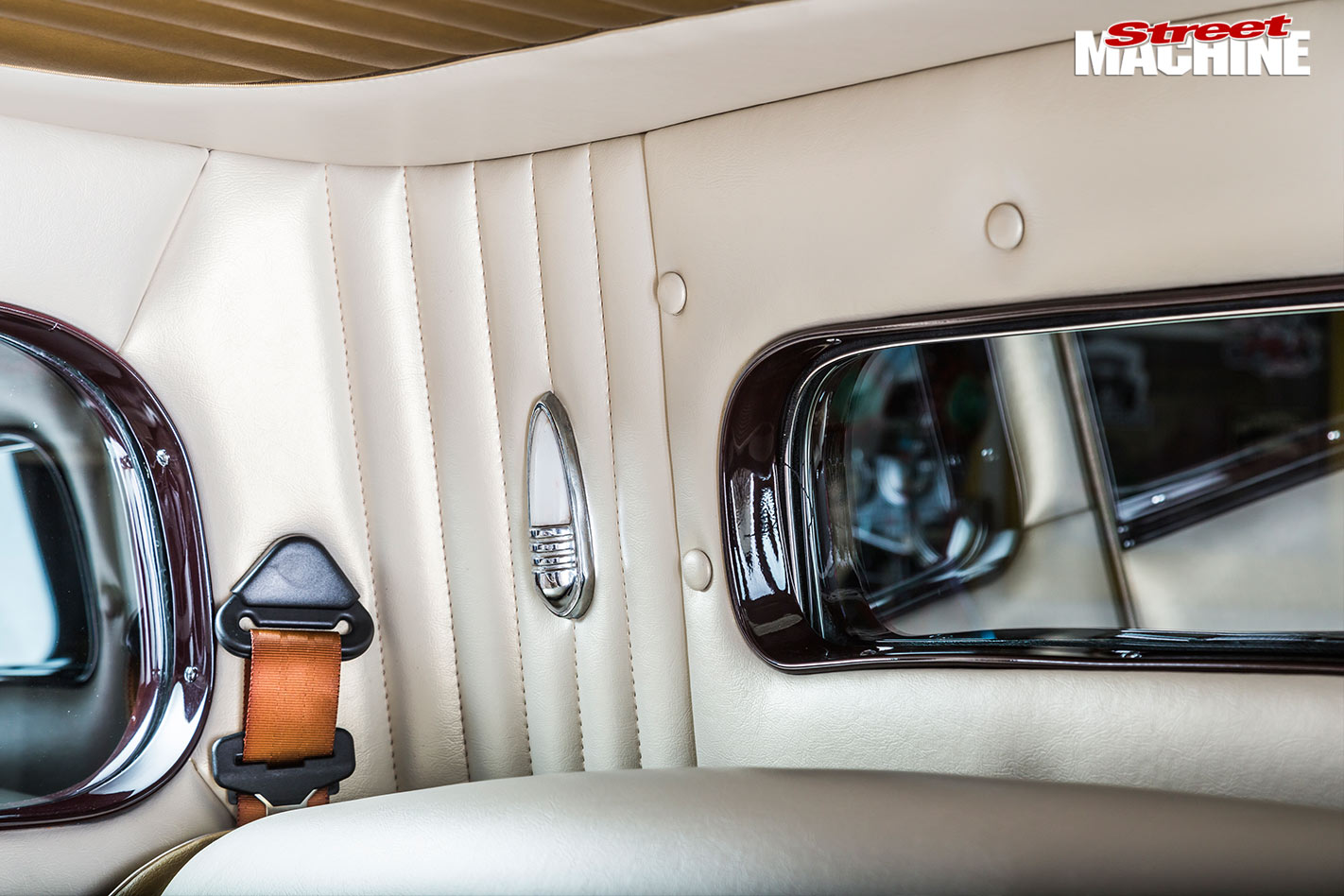 Inside, Pete Bray of Light Pass Motor Trimming is the wizard behind the mid-50s tuck-and-roll interior. Working to a tight deadline as Brentyn rushed to get the ’32 to the 2016 Boogaloo Invitational, Peter swathed everything in Holden Old Gold and White Pearl vinyl, topped off with OEM GM sparkle bead trim. Finishing it off is a ’46 Ford Super Deluxe wheel with a nostalgic-look 16-inch Lokar shifter and a bevy of Stewart Warner black-faced crescent-moon gauges.

The coupe made it to the 2016 Boogaloo, where it was enthusiastically received, but Brentyn didn’t build it for the accolades. 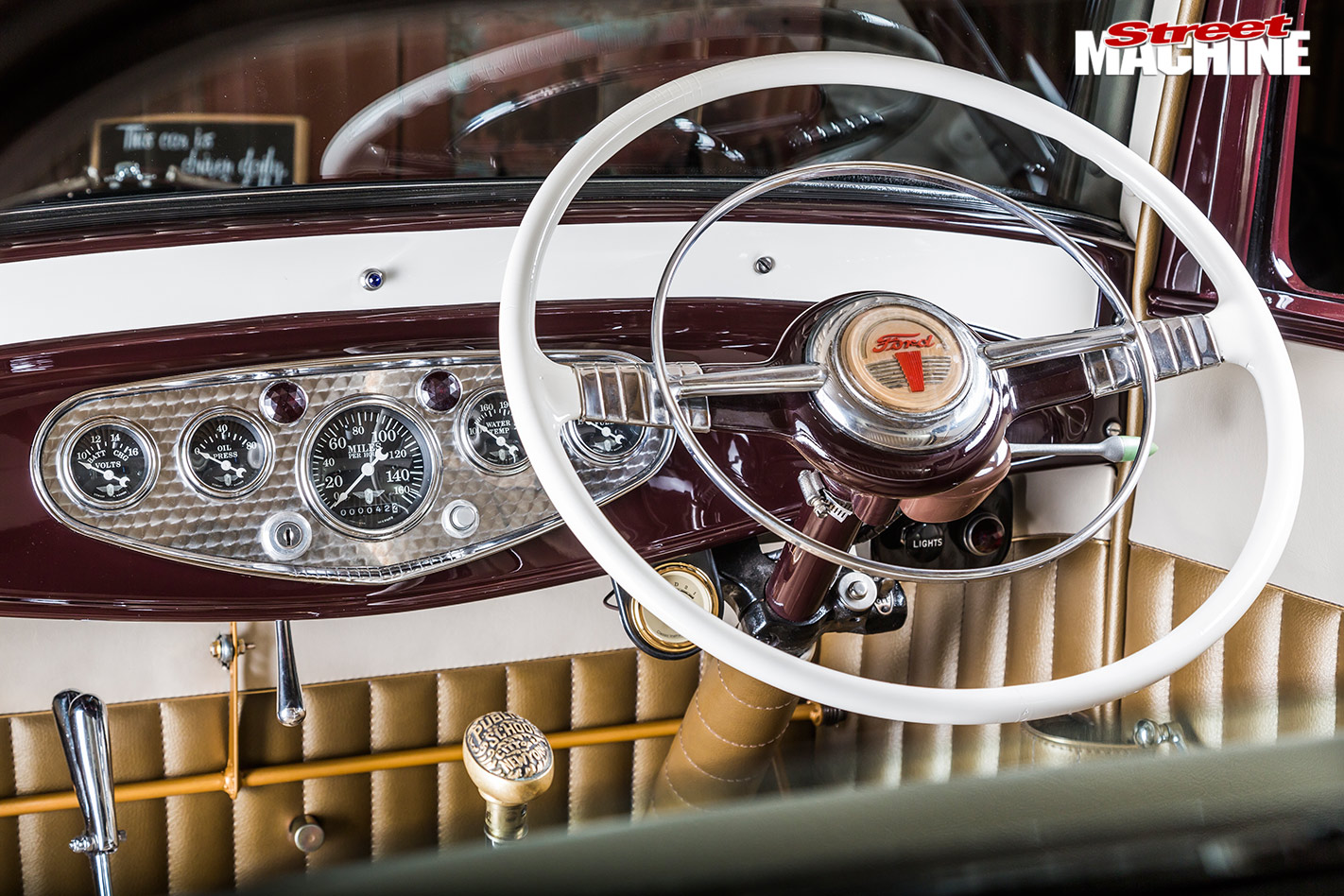 The tiller is a ’46 Super Deluxe on a ’40 column, with a Foxton indicator off the side. The indicator lights in the dash are from a B17 bomber

“Driving it for the first time, you couldn’t wipe the smile off of my face,” he says. “Now I’m just enjoying the hell out of it. I drive it everywhere; I park it to go to Kmart, wherever!”

He admits he gets a big kick out of being stopped by regular folks who love the car. 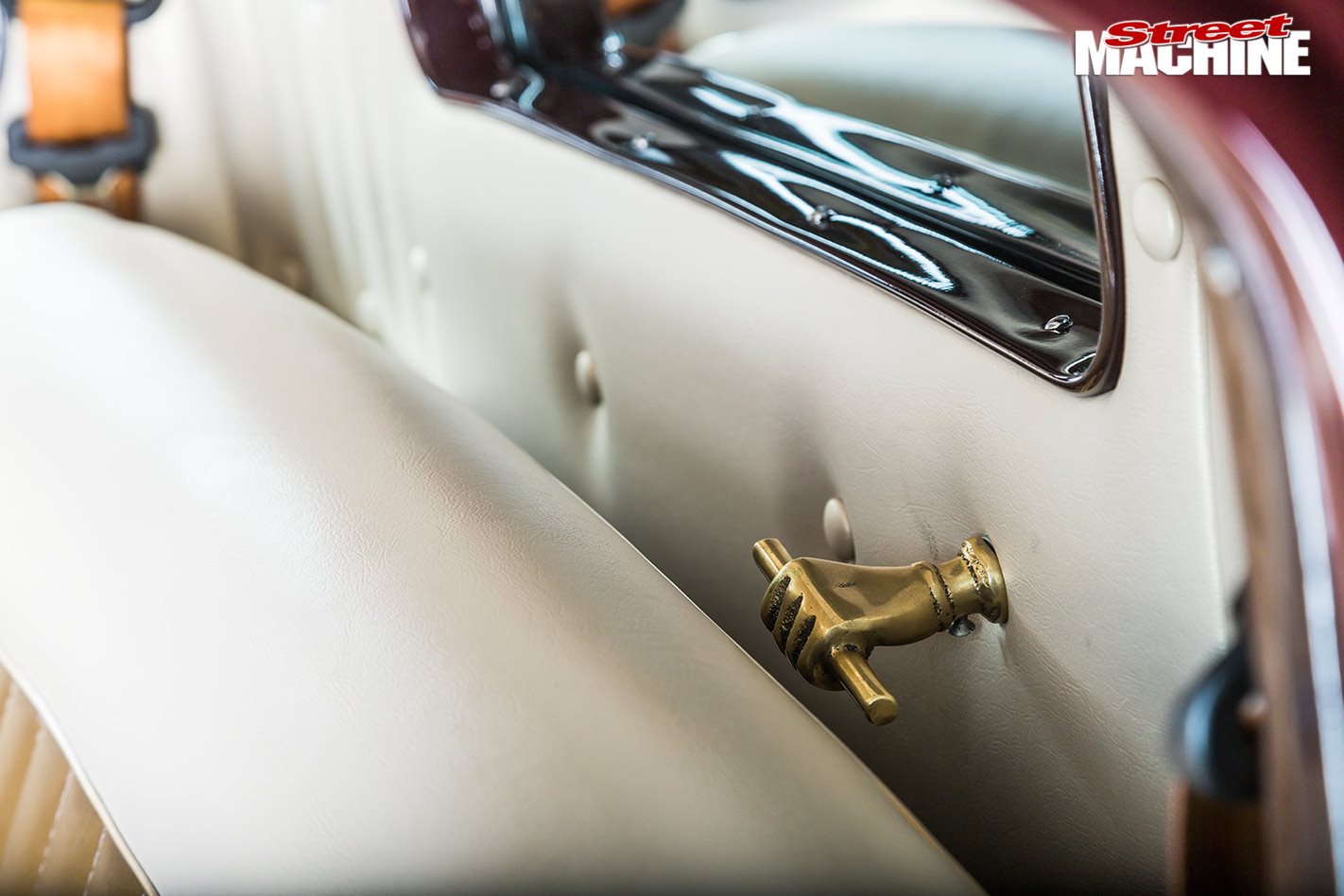 “Especially kids,” he says. “I offer for them to hop in and pretend that they’re driving. It’s the only way to create future hot rodders!

“I also recently drag-raced in a hot rod bracket at AIR. It was great fun, although I had far too much wheelspin. But hey, it was my first time. I managed a 15-second quarter-mile. It will go quicker with grippy tyres, and maybe the driver,” he laughs.

Watch it for yourself on My Garage Rules. 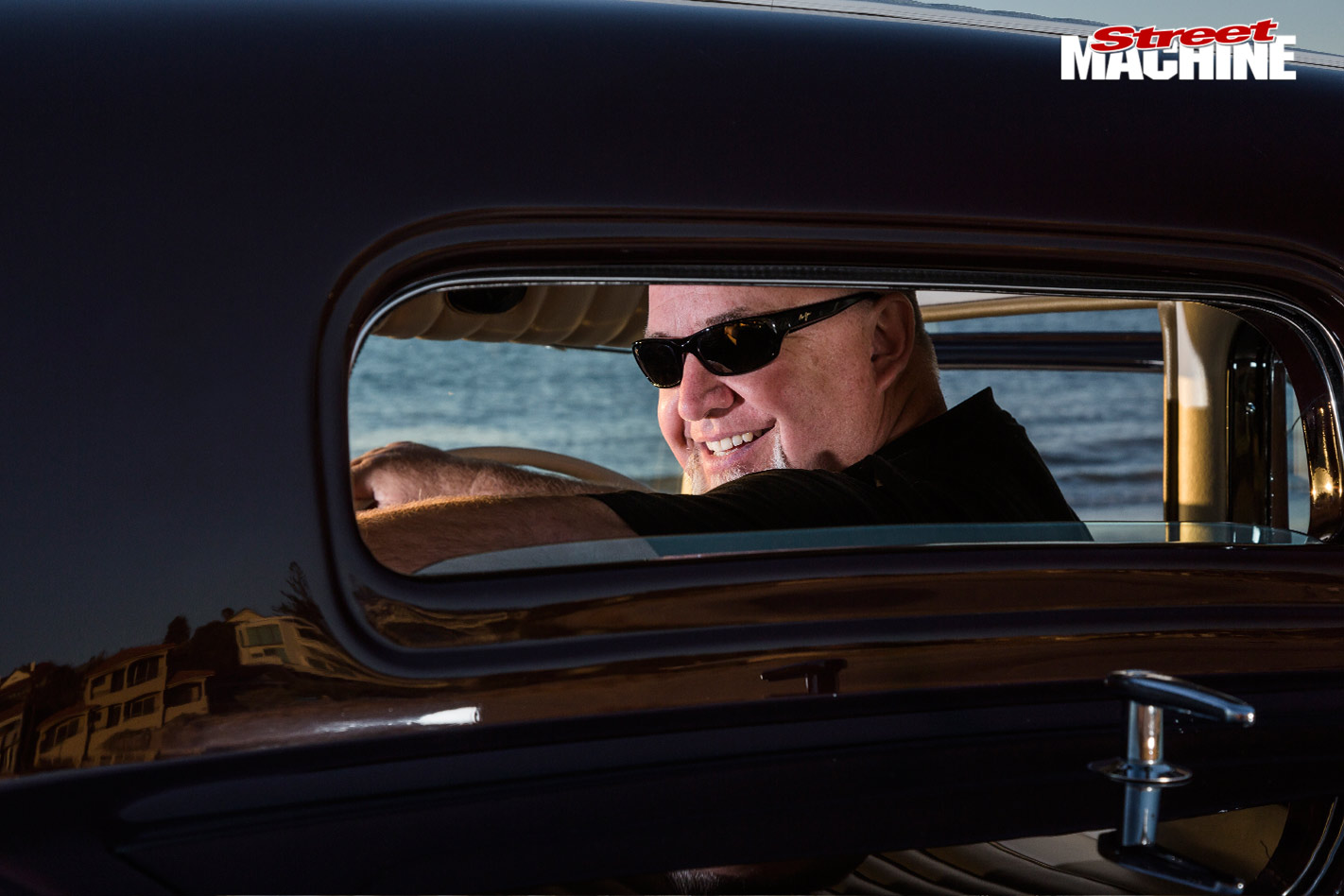