Body by Elvis, heart by Chrysler, radiator by Norm.

This article was originally published in the December 2007 issue of Street Machine.

Norm Hardinge must be one of the hardest-working blokes in the hot rod and street machine community. He goes to every major show in the country, including Summernats, and always takes a truck-load of his Aussie Desert Cooler products with him. Somewhere in between all that he managed to find the time to build another killer hot rod and, of course, go salt lake racing. This project started right after Norm got his ’40 Ford pick-up on the road. 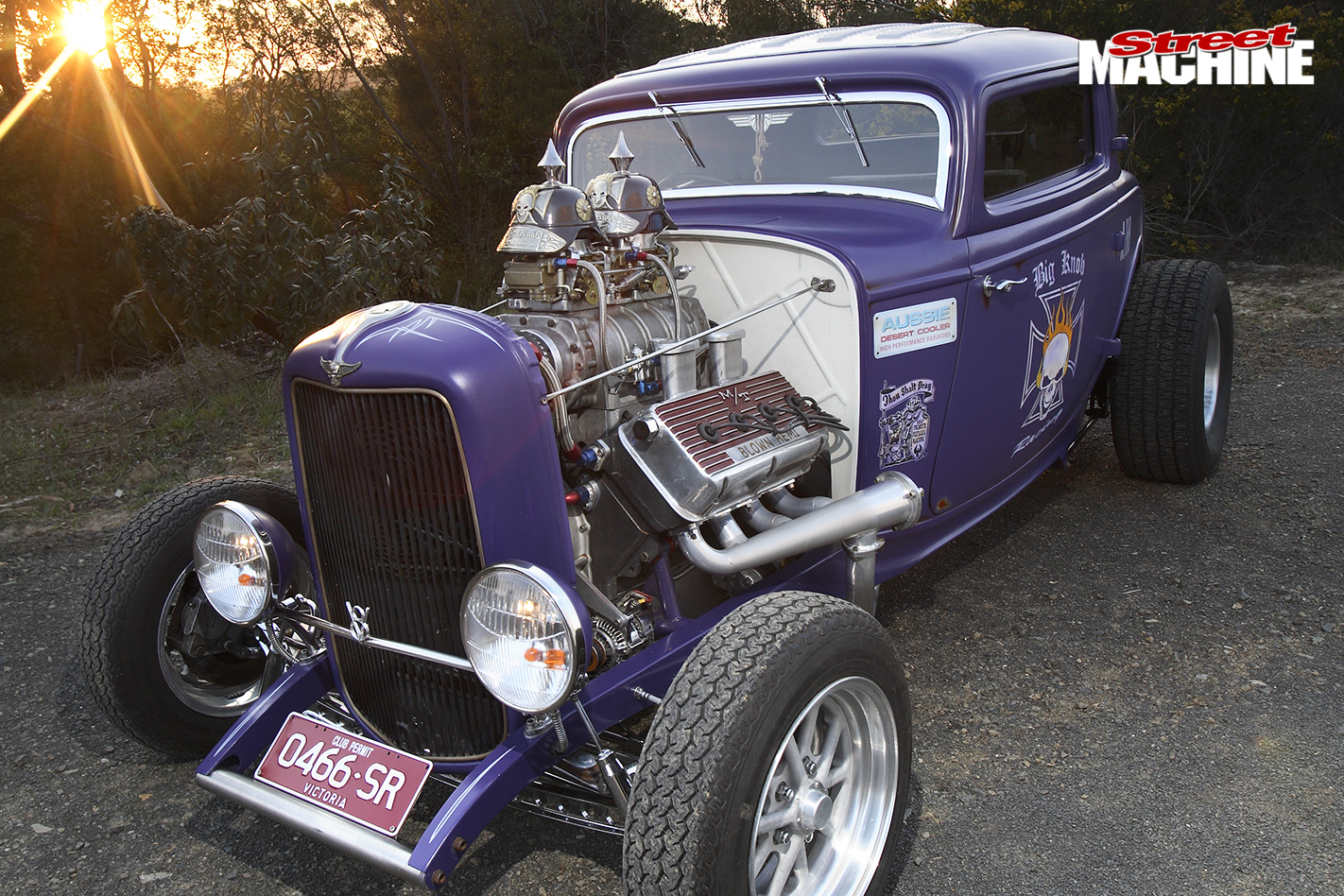 “As soon as I finished the pick-up in 2000 I thought I’d build a flathead-powered Model A pick-up. After a bit of swapping I ended up with an improved A coupe and a Hemi. I was flat-out with the business and couldn’t find the time to get to it,” Norm says.

A bit later, Elvis entered the building and said: “Uh-huh-huh, what are you doing with that body there, Norm? How about we put it in my trailer and I’ll get it a-rockin’ and a-rollin’ for ya?”

Okay, that’s not what he said, but before long the car was heading back up the Pacific Highway to Rod Bods by Elvis in Nabiac. 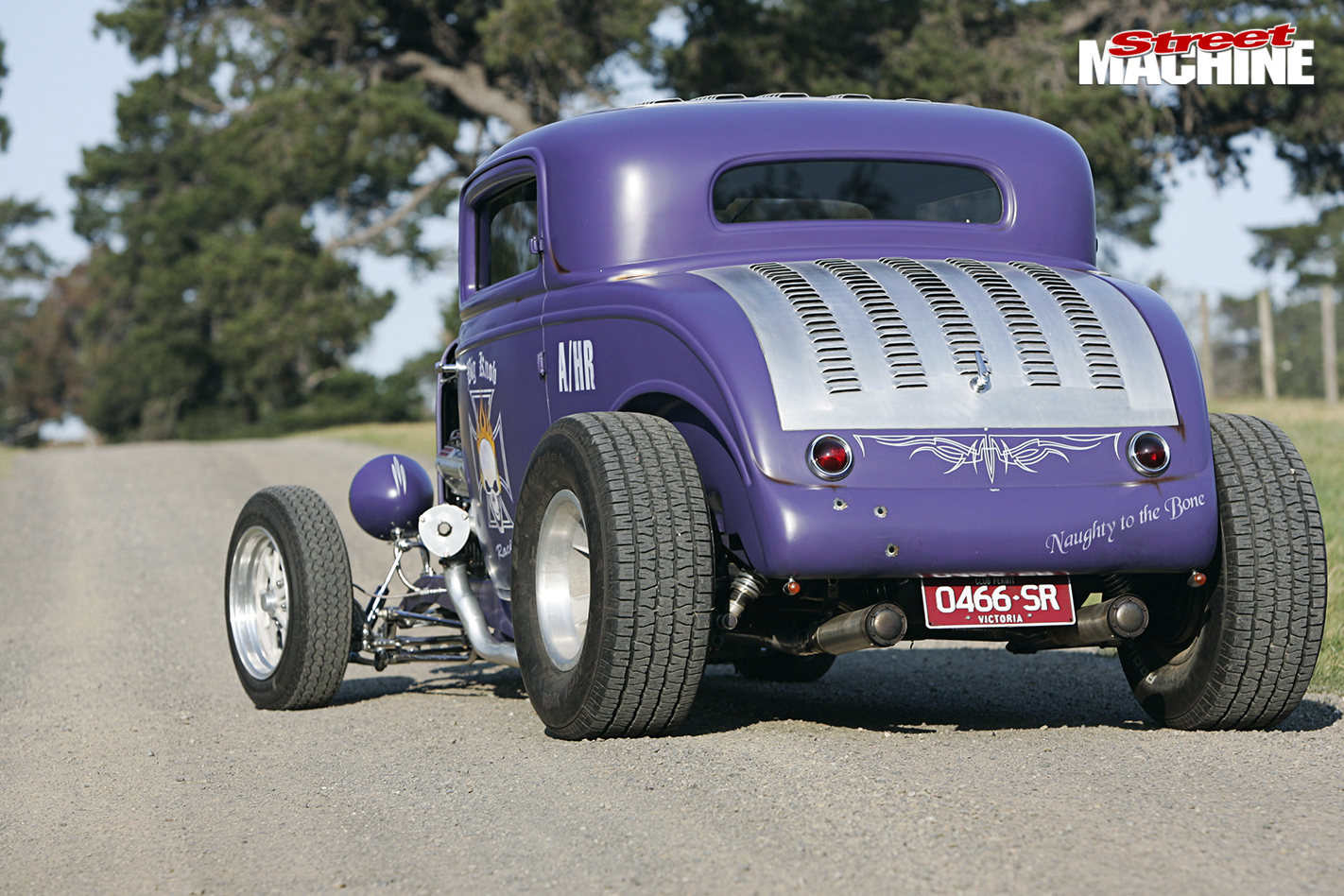 “I told Elvis I wasn’t in a rush to get it back but a few months later he rang me and asked when I wanted it done. I said: ‘You’ve sold it, haven’t you?’ and he said he had someone interested in it. I told him to sell it and we’ll work something out,” Norm recalls.

It wasn’t too long before Elvis had some news: “I got another call to say the body was ready, but it had undergone a bit of a transformation — it was now a ’32 three-window coupe. You can’t really beat a ’32 coupe and a Hemi.”

Well, there’s probably one thing that tops it: a blown Hemi. 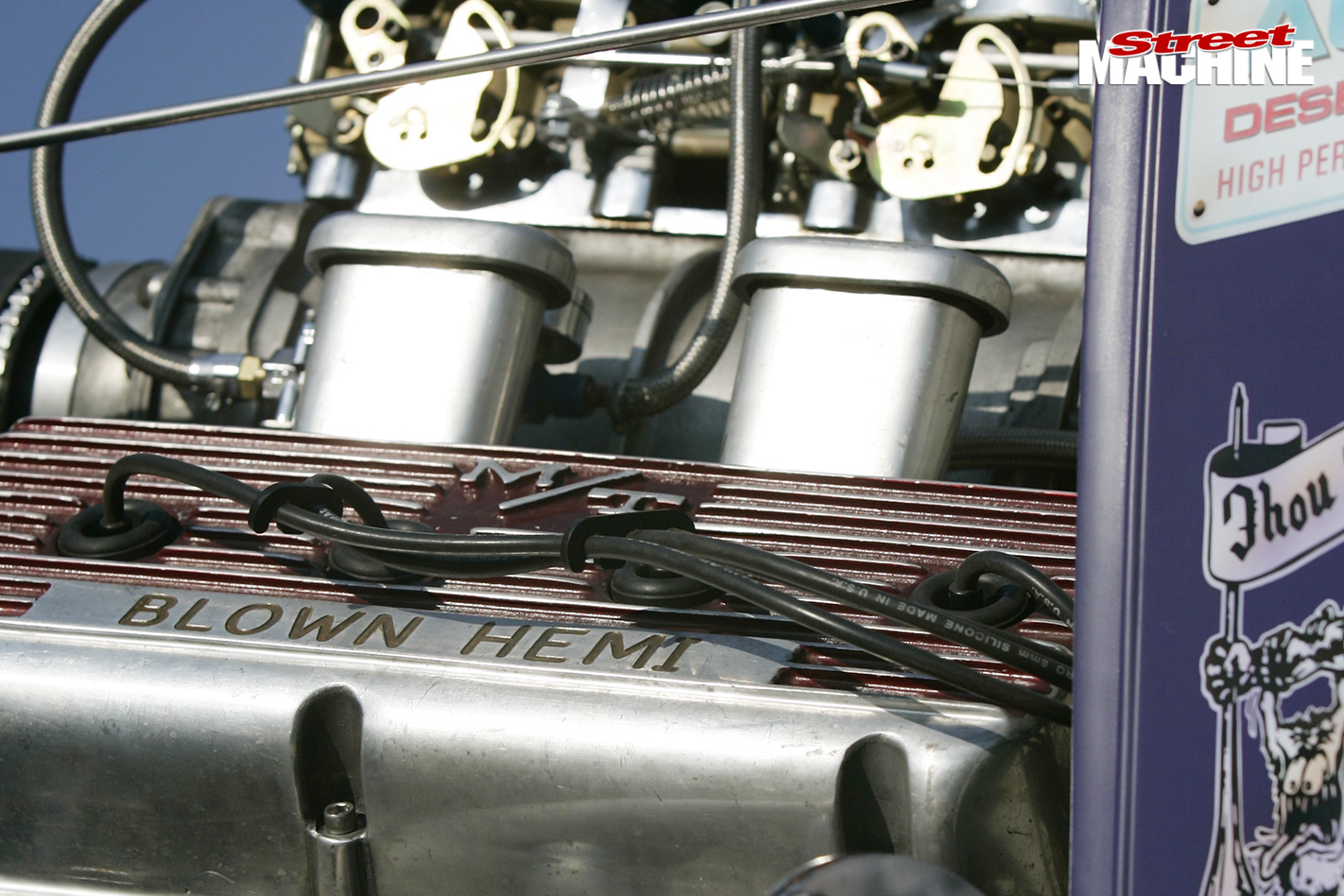 Norm’s mate Rod Hadfield sourced a motor described as a runner: “I guess it must have run at some stage — probably 1958! When we pulled it apart it was pretty stuffed but that’s just how it was, so we dealt with it. There’s not much you can do really,” Norm says.

Steve Russell was called in to sort out the once-proud 392 Chrysler and get it ready to handle the extra boost of the soon-to-come 6/71 blower. A set of forged 8.5:1 pistons was slotted in and a Crow Special camshaft got the nod. Norm lists the valves as ‘big’ and the valve springs as ‘monsters’. The rest is pretty much how the Chrysler engineers built it and we all know how good they were. 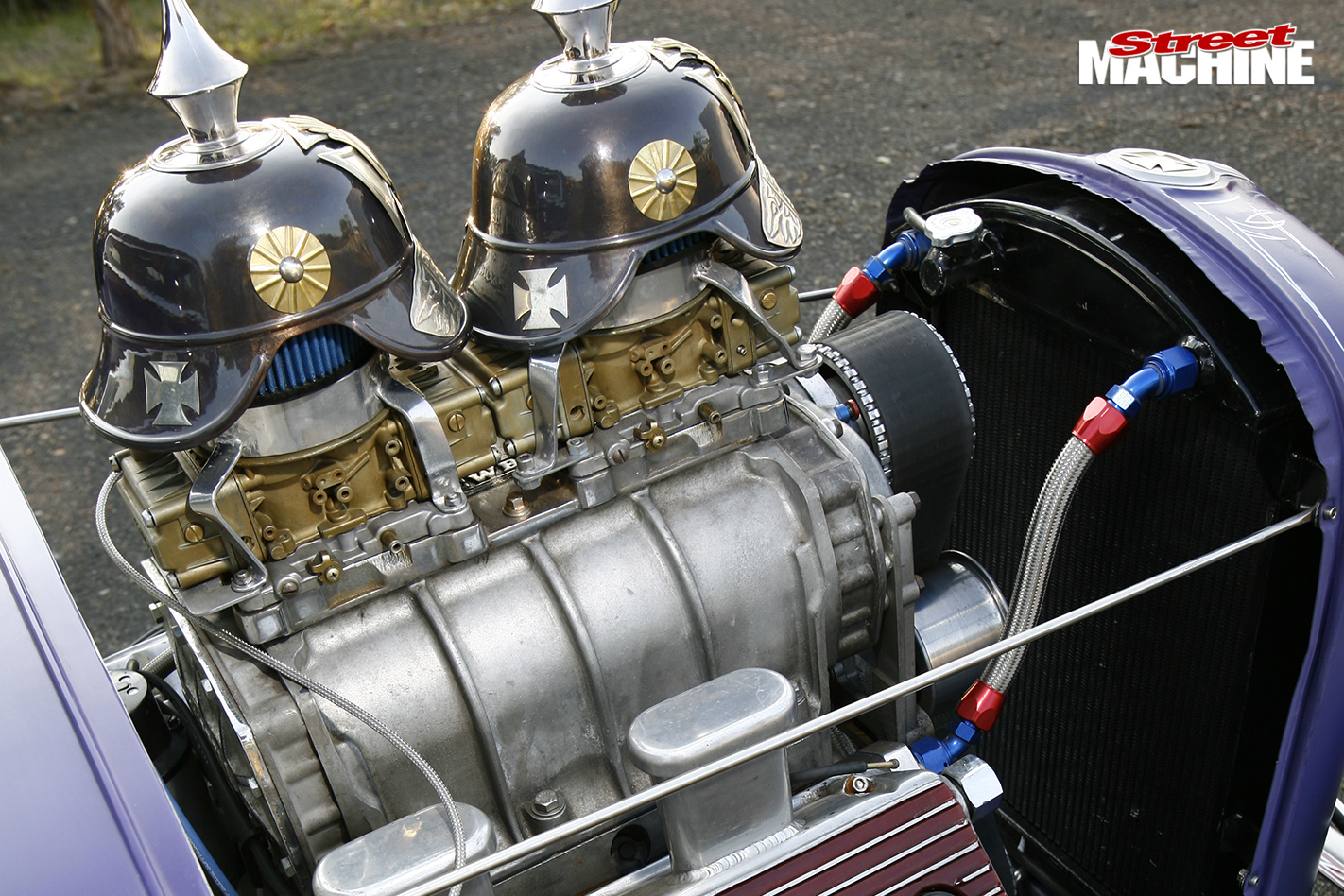 There’s a giant alloy sump keeping the engine well supplied with lube, and the blower is a brand-new unit which has been left unpolished because shiny just wouldn’t look right on this car. Feeding the fuel in are a couple of 660cfm Holley centre-squirt carbs that came off the salt lake racing car, which runs a tunnel ram. The carbs are boost referenced — sort of: “They’re referenced to suck juice like crazy! It hasn’t been tuned up properly; we just set the timing to 10 degrees and drove it to Sydney and back. It cost me 900 bucks in fuel!”

Yep, the maiden voyage in the coupe was up to the 2007 Rat Rod Day — Norm and Rod left Melbourne one hour after they got the car running! Some people call that faith; others wouldn’t be so kind. 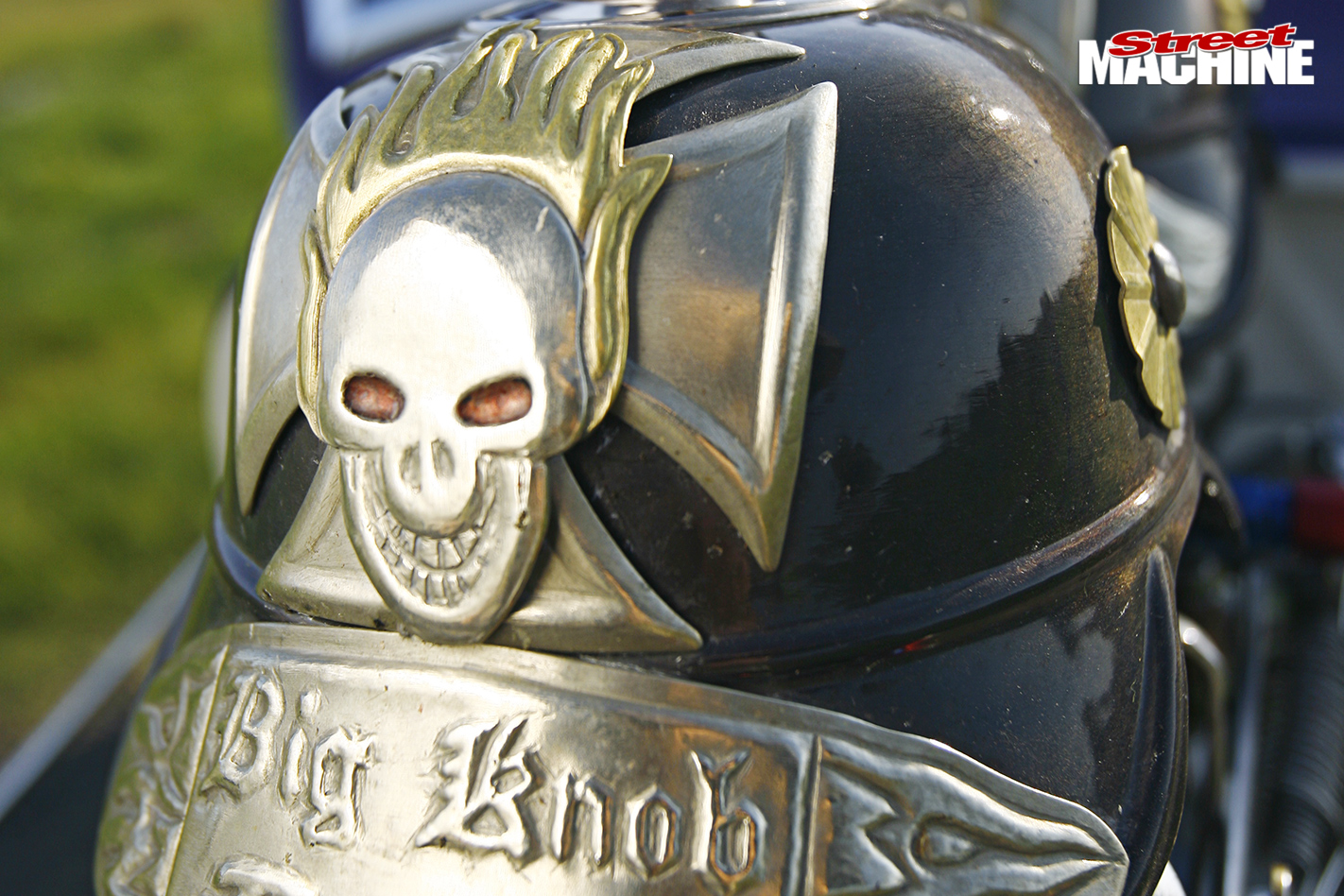 “We were meant to be going up in Rod’s blown Ardun T coupe but he rang me a couple of months before the day and said: ‘I still haven’t got the motor back and it just isn’t going to happen — you better get your car finished!’ He’s lucky he didn’t ring a day later because we wouldn’t have made it!”

It was at the Rat Rod Day that Norm picked up his first trophy — Top Closed Rat Rod — which went right along with all the stone chips and sore arse he got from the trip to Sydney and back. We’re not sure why Norm’s complaining, though; it was probably much more comfortable than Rod’s Model T coupe would have been.

But we’re getting ahead of ourselves. With the new body back from Elvis, there was only a day or so of bodywork to do before Norm sprayed on the paint. 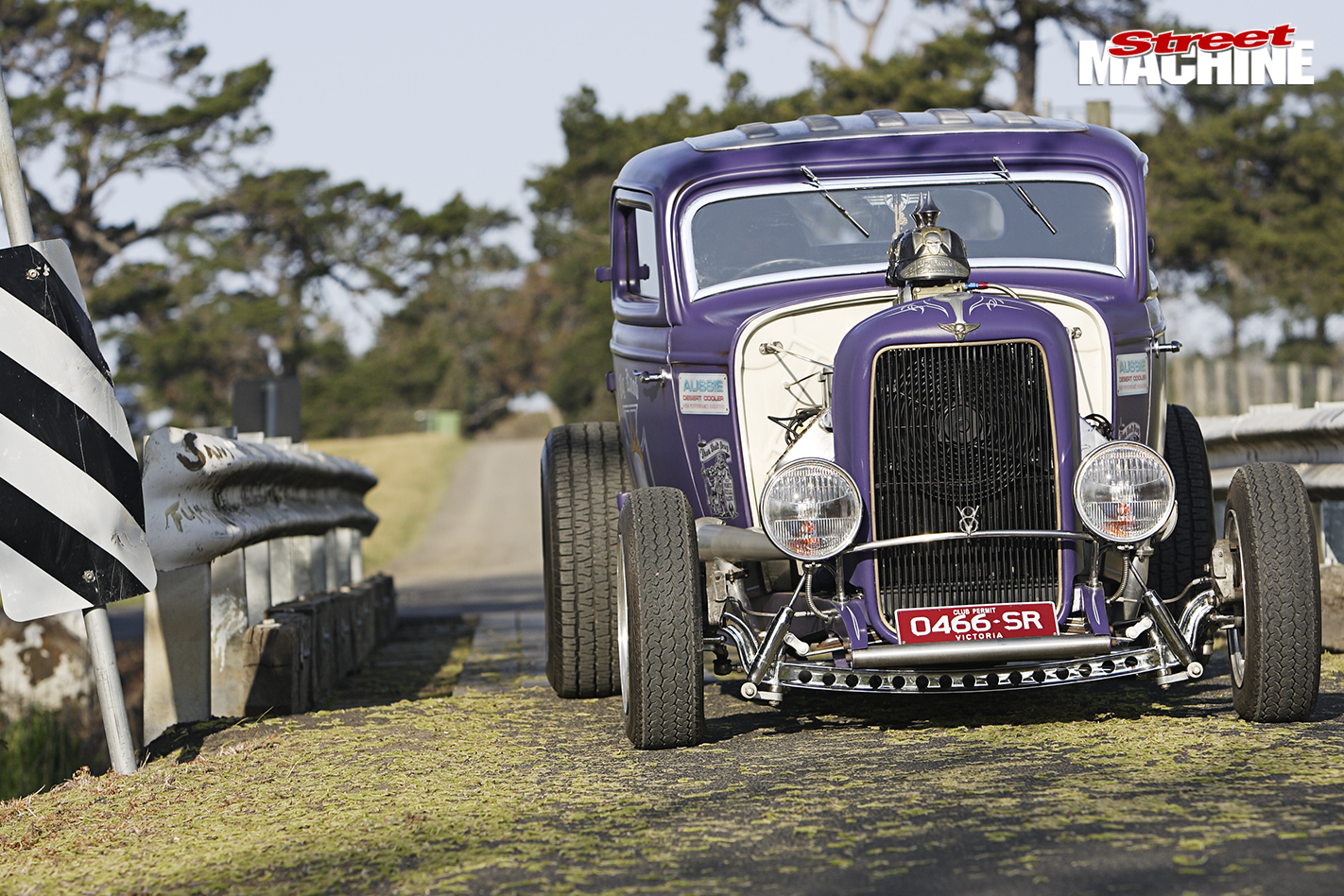 “I wanted to paint it flat purple but wasn’t sure what shade, then I saw a Street Machine cover with some purple across the top and it was just the colour I was looking for,” he says.

The whole car was built to look — and race — like a nostalgia drag racer, hence the Big Knob Racing Team signwriting and A/HR class designation on the side of the car. Some airbrushed patina was applied by Nicky and Myk, complete with strategically placed rust stains — a tough look to get any other way on a fibreglass car.

There’s also some old Ed Roth ‘Thou Shalt Drag’ artwork on the cowl but Norm has updated it to read: Support Nostalgia Racing not Street Racing. “The car will attract enough attention from the coppers anyway,” says Norm. 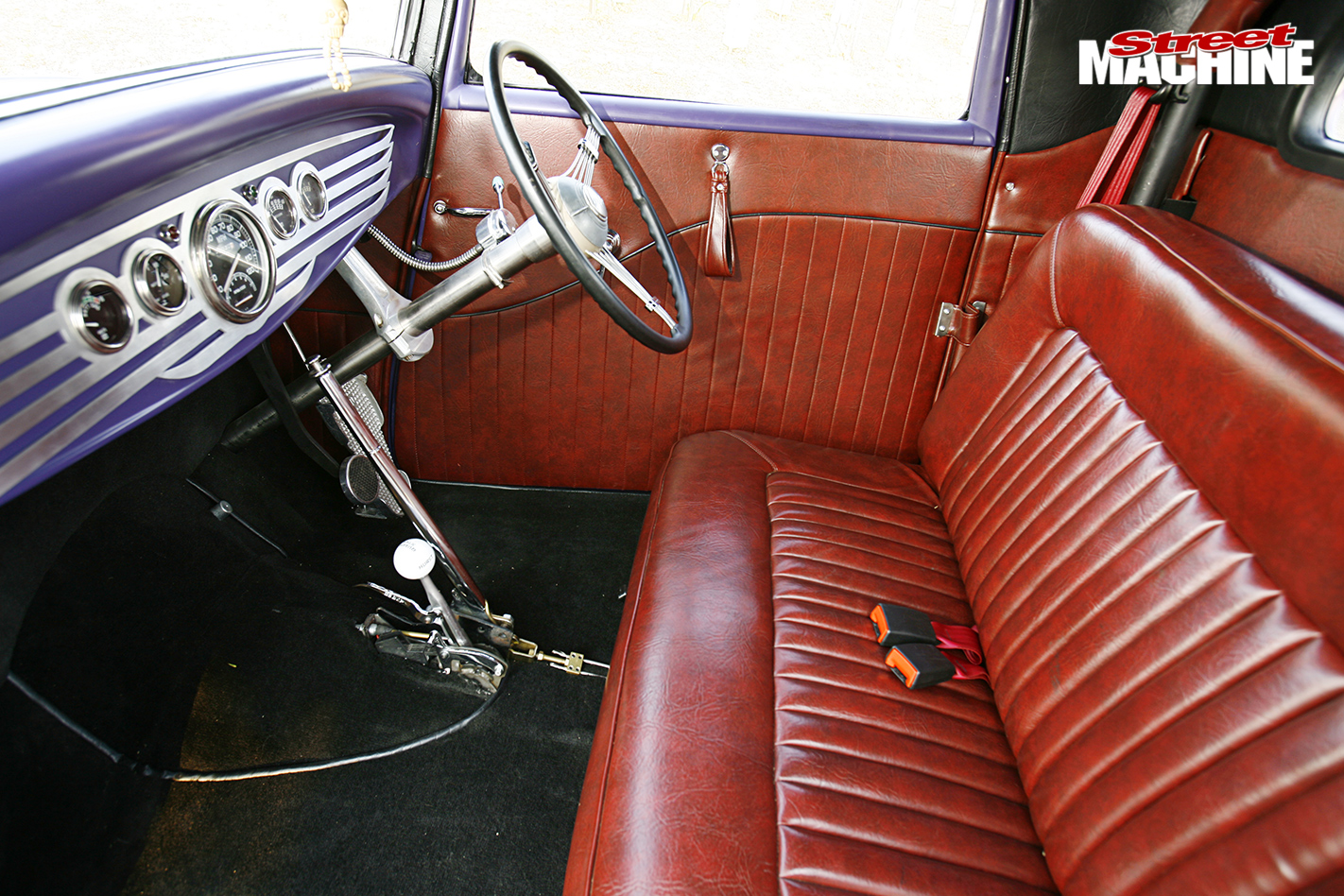 Back in the 60s, spindle-mount spoked wheels and Halibrands were the hot ticket. Norm has replicated that look with a set of Dragway spokes leading some of Rod’s Haddybrand wheels wrapped in Michelin and BFG radial rubber respectively. Norm has mudguards for the car but he left them off for the photos.

Although it might look a bit rough and ready — which is the whole point — swing the door open and you’re greeted by a very flashy interior. Norm likes to drive his cars and it’s much nicer when you’ve got carpet and something covering the seat. The oxblood tuck and roll was stitched by a young hot rod chick called Ket, and it’s as neat as any job you’ll ever see. Neat, considering it was her first full trim job.

The dashboard has been dressed up with a laser-cut aluminium surround that Norm designed. 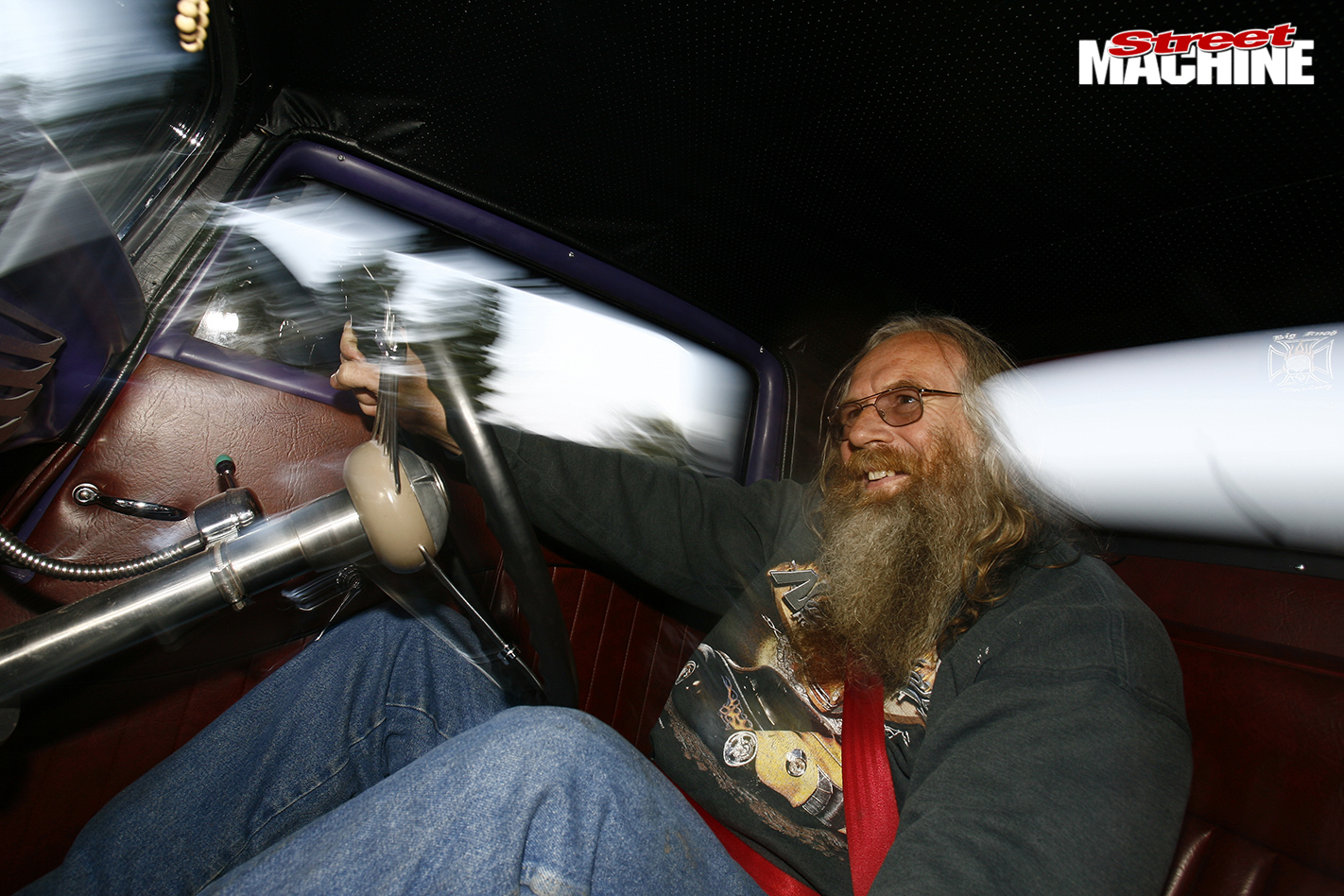 “I didn’t want just anything from the shop but some kind of aircraft-looking thing,” he says. It houses a combination speedo-tacho from a Harley-Davidson and a quartet of Stewart Warner gauges. Shifting duties are handled by a Hurst Quarter Stick, a Moon pedal meters the grunt and directional control is handled via a reproduction ’40 Ford wheel.

Air cleaners don’t usually get much ink in features about cars but on this rod, it would border on criminal not to mention them and the story behind their creation.

Tom Peach is a good friend of Norm’s. He does a lot of work on classic cars and Norm often helps him out with his cooling requirements. In return, Tom always asks whether he can do at least one thing on Norm’s cars. When Tom asked this time, Norm replied: “I want to do something with the air cleaners. I dunno, old German helmets or something.” 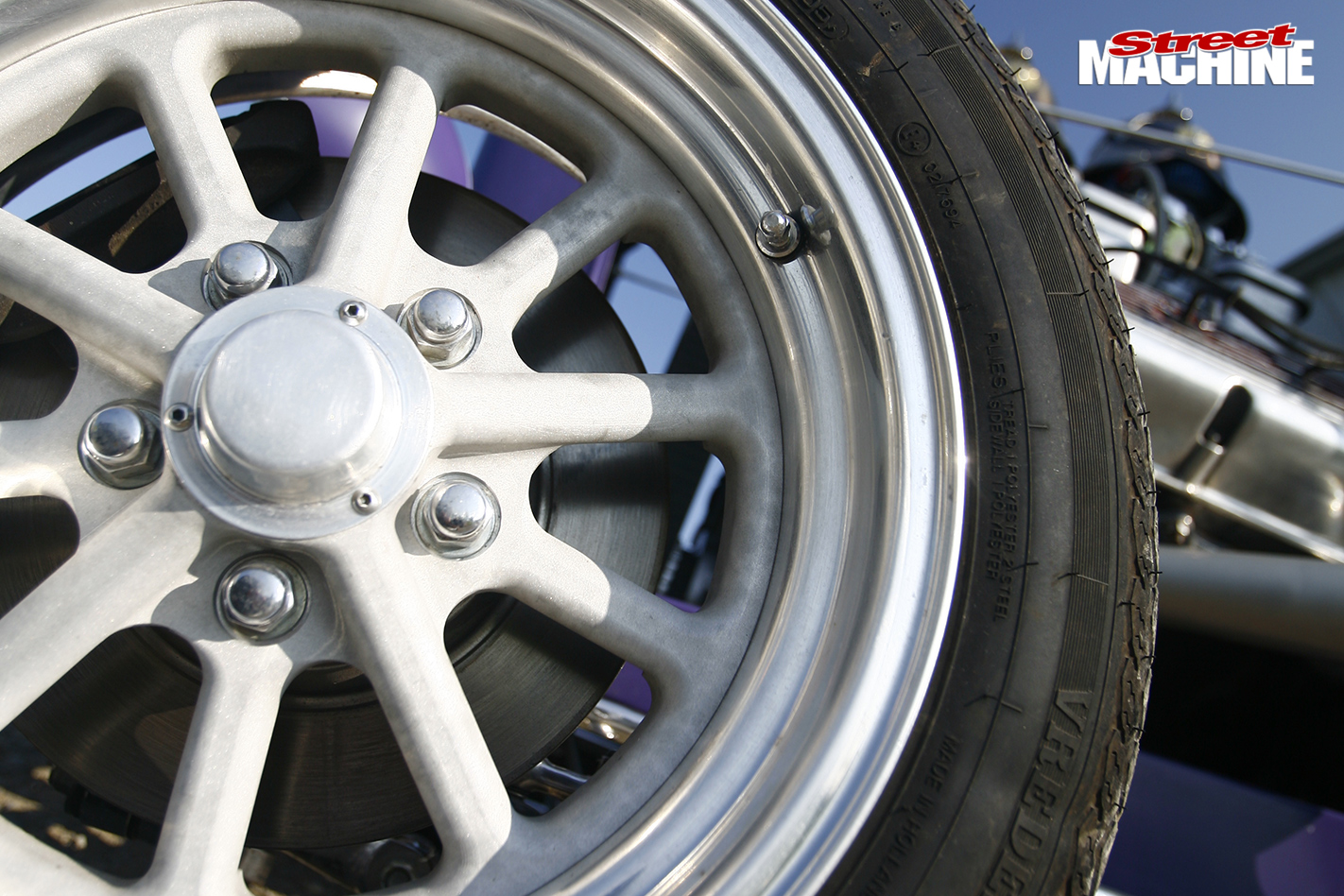 Norm explains: “Tom went and did some research and that’s what he came up with. He built one and his son Stephen did the other but you can’t tell them apart. They’re exact replicas and you can even wear them! The only thing he changed was replacing the German crest with the Big Knob Racing logo.”

That detail underlines Norm’s whole attitude to his cars — there’s always room to have a laugh. 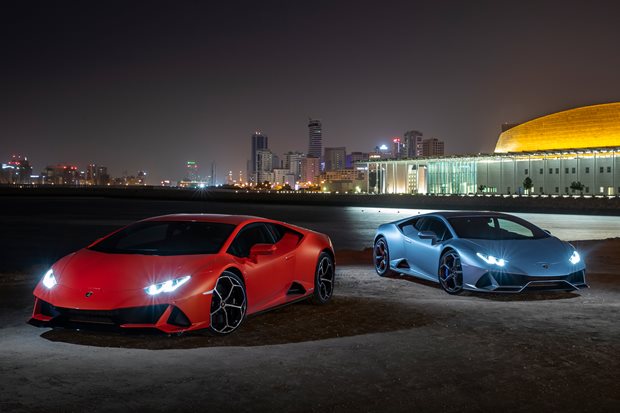