YOU’RE looking at one of Melbourne’s toughest street cars, Paul ‘Patto’ Paterson’s epic ’67 Camaro. The fat-tyred, 3800lb, 548ci fat-block F-body has run 9.40@146mph aspirated, with another 300hp worth of giggle-gas up its sleeve spare! And to think it wasn’t even the car Paul intended to buy.

A quick way to tell the difference between a ’67 and ’68 Camaro is to look for the quarter-window, as Chevy removed it for the ’68 model year. There are also minor differences in tail-light design, and the panels don’t easily interchange between the years

“I went up to Queensland to have a look at a pro street ’57 Chev, but it wasn’t any good,” says the auto sparky. Instead, he came home with this ’67 Camaro after falling head over heels in lust with it.

“A mate of mine had one years ago and I love the lines, especially those rear quarters, which are just awesome,” says Patto. “I’ve actually had it 10 or 11 years as I tend to hang onto stuff. I just wanted to build a tough big-block street car; I’m not interested in making it a race car.

MOREPro touring LS3-powered 1967 Chev Camaro SS
Patto admits he didn’t start this build with a dunger, saving plenty of heartache. “The Camaro was in good condition when I started,” he says. “It was Atlantis Blue with a black vinyl roof.” The PPG Jet Black was sprayed by Troy Fava six years ago, while the panels were massaged by Western Smash Repairs in Sunshine 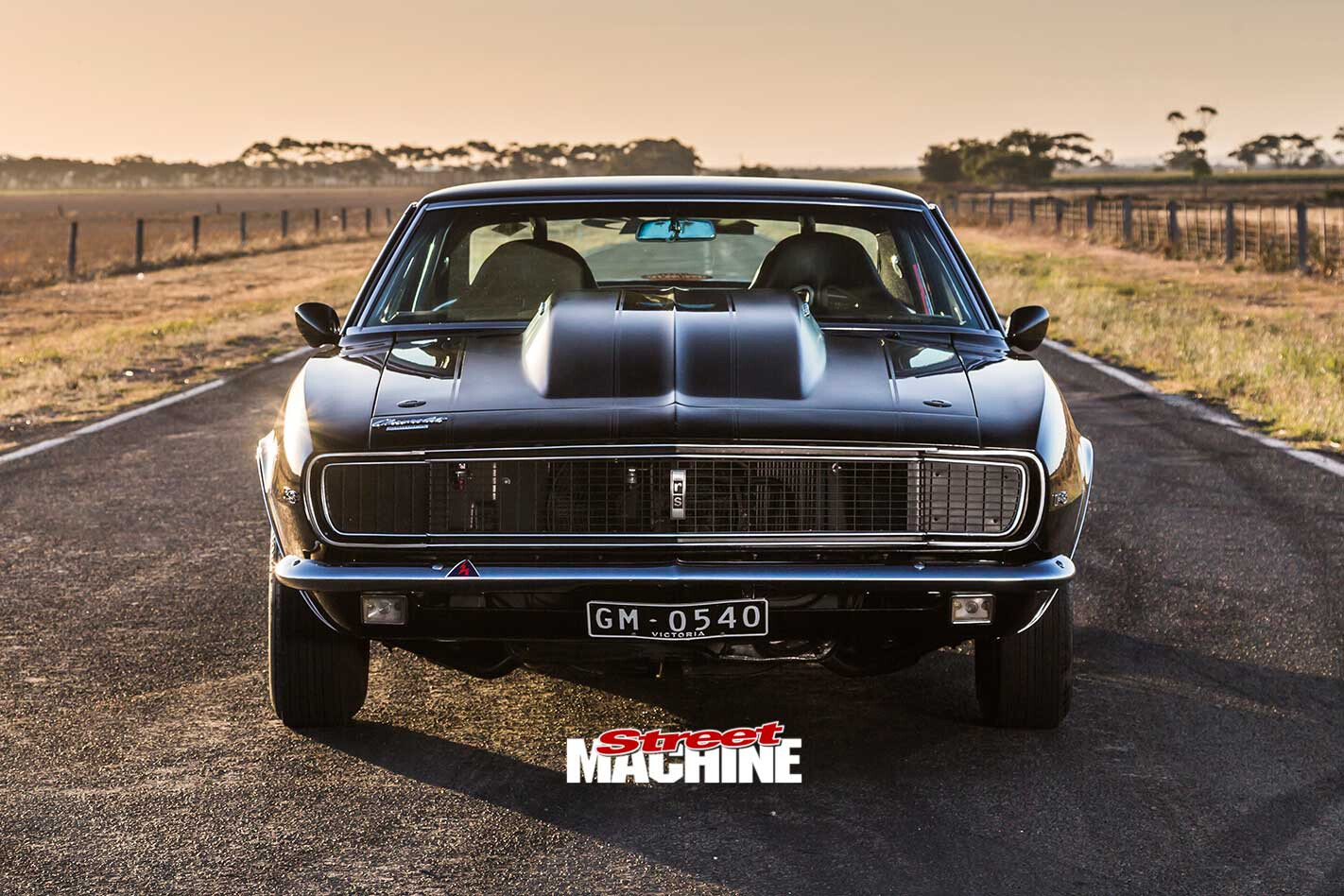 While Chevrolet made nearly 65,000 RS models out of the 220,000 Camaros in 1967, heaps more would have been sold if they came kitted out like Patto’s is now, with a nitrous-huffing 548ci Merlin big-block under their bonnet.

MOREBarra-powered 1967 Chevrolet Camaro SS
“I’ve done 99 per cent of it myself,” says Patto of the build. “I’m an auto electrician by trade, but I’ve played with cars since I was 14 or 15. My old man has always had Customlines, so that’s where it started I think”

“I bought the engine off my mate Michael Vergis, whose big-block nitrous ’65 Impala was in Street Machine a few months ago (SM, Jan ’19),” says Patto. “It was due for a tidy-up as it’d been together for a while and had cracked pistons and that sort of stuff. So we did a new rotating assembly, alloy heads, shaft-mount rockers and all that.”

MOREPro touring big-block 1968 Chev Camaro
Fitting big ’n’ little Center Lines to a 60s muscle car is a great way to end up with a killer-looking ride. Patto’s span 15x5.5 up front and 15x8.5 out back, wrapped in Continental front-runners, with Mickey Thompson 275/60 Pro X fatties behind 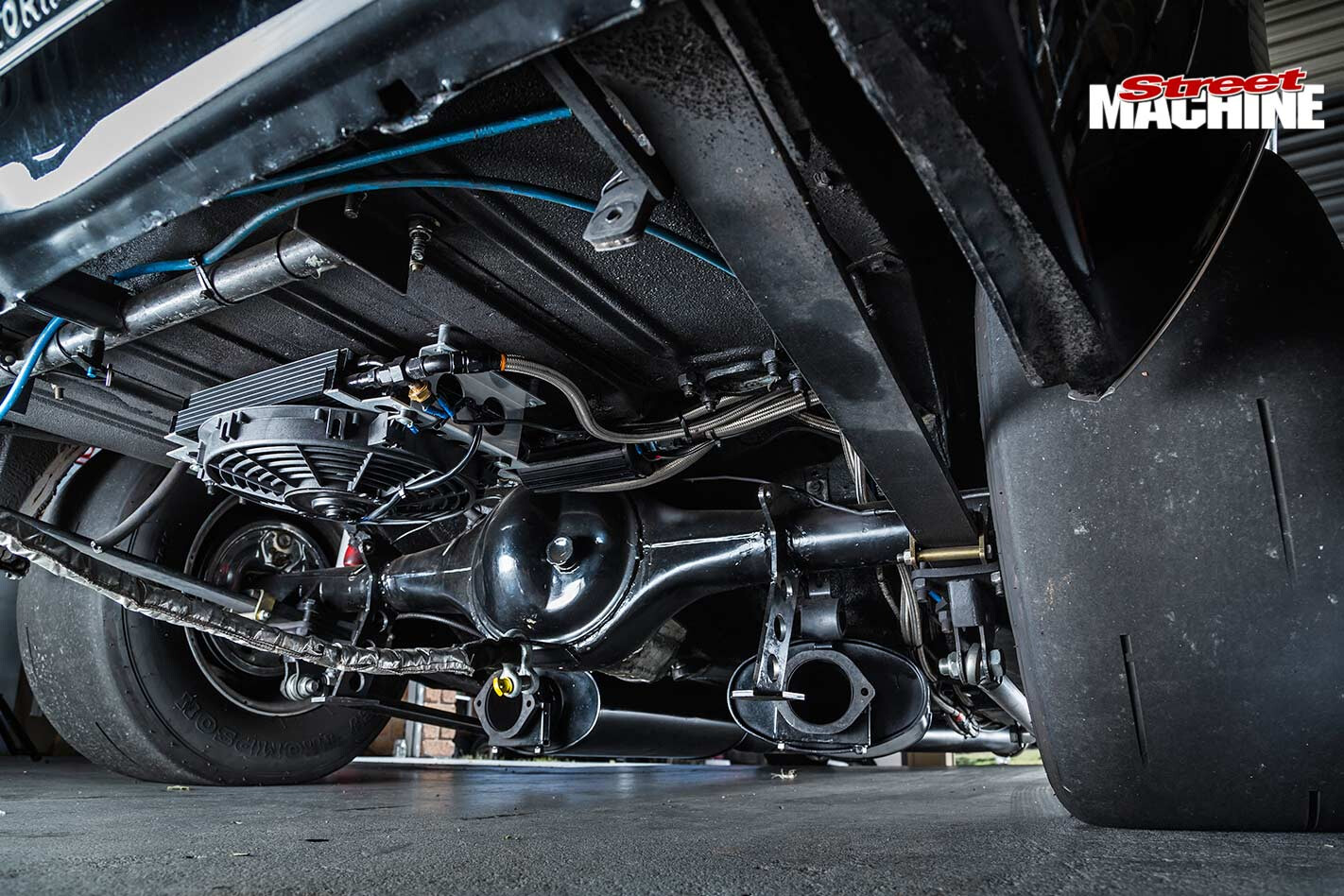 The Camaro doesn’t rely on high-tech trickery to stay stable at speed. “There are tube control arms with built-in camber adjustment, and Comp Engineering three-way shocks up front, with Calverts out back,” explains Patto. “The wheels go straight up, and it goes where I tell it. It just runs nice and true”

While it came with a two-speed, the Camaro has grown a three-speed TH400, packed full of good gear like a full manual reverse-pattern set-up, alloy drum, 38-element sprag and transbrake. It bolts to the big-block with a custom bellhousing that incorporates a scattershield, shrouding the TCE 9.5-inch, 5800rpm nitrous converter.

900 horses’ worth of Merlin big-block Chev, with another 300hp of laughing gas up the sleeve? Yep, that oughta be enough to make this classic muscle car get up and go!

Out the back behind the custom three-inch tailshaft fitted with 1350 unis and Strange Engineering yokes is a nine-inch diff that runs a Strange centre, 4.11 gears and Moser 31-spline axles. The fat and skinny 15-inch Center Line Auto Drags help complete the Camaro’s wicked pro street vibe. 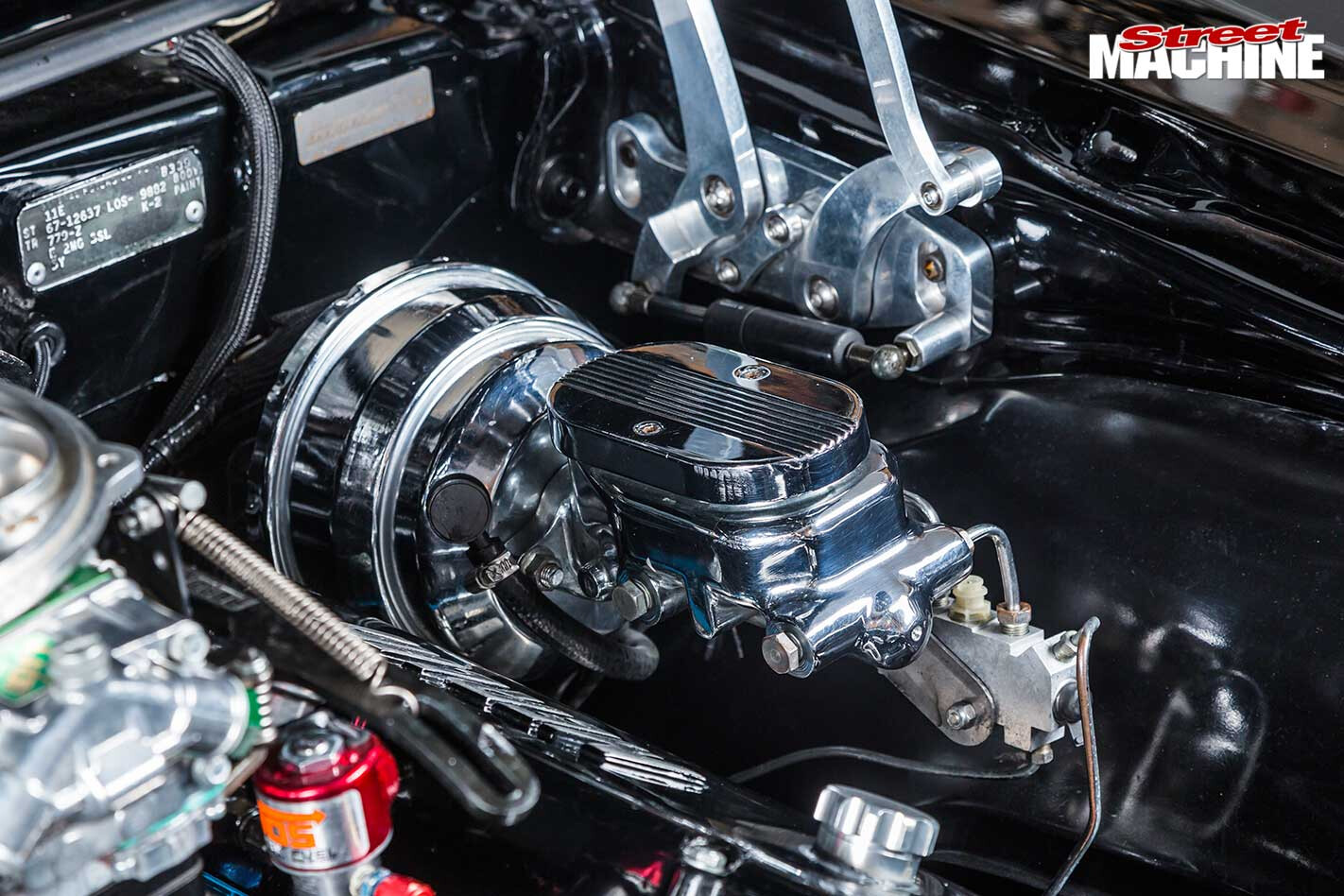 “We take it out plenty and it gets driven heaps,” Patto says. “It doesn’t get hot on the road, and it has power steering in it, so it drives great. Cops don’t bother as they must think that’s how these cars came back in the day.

“The only thing that gives it away is the four-inch full-steel reverse cowl. I actually used to have a six-inch cowl but I couldn’t see around it, so it had to go!” 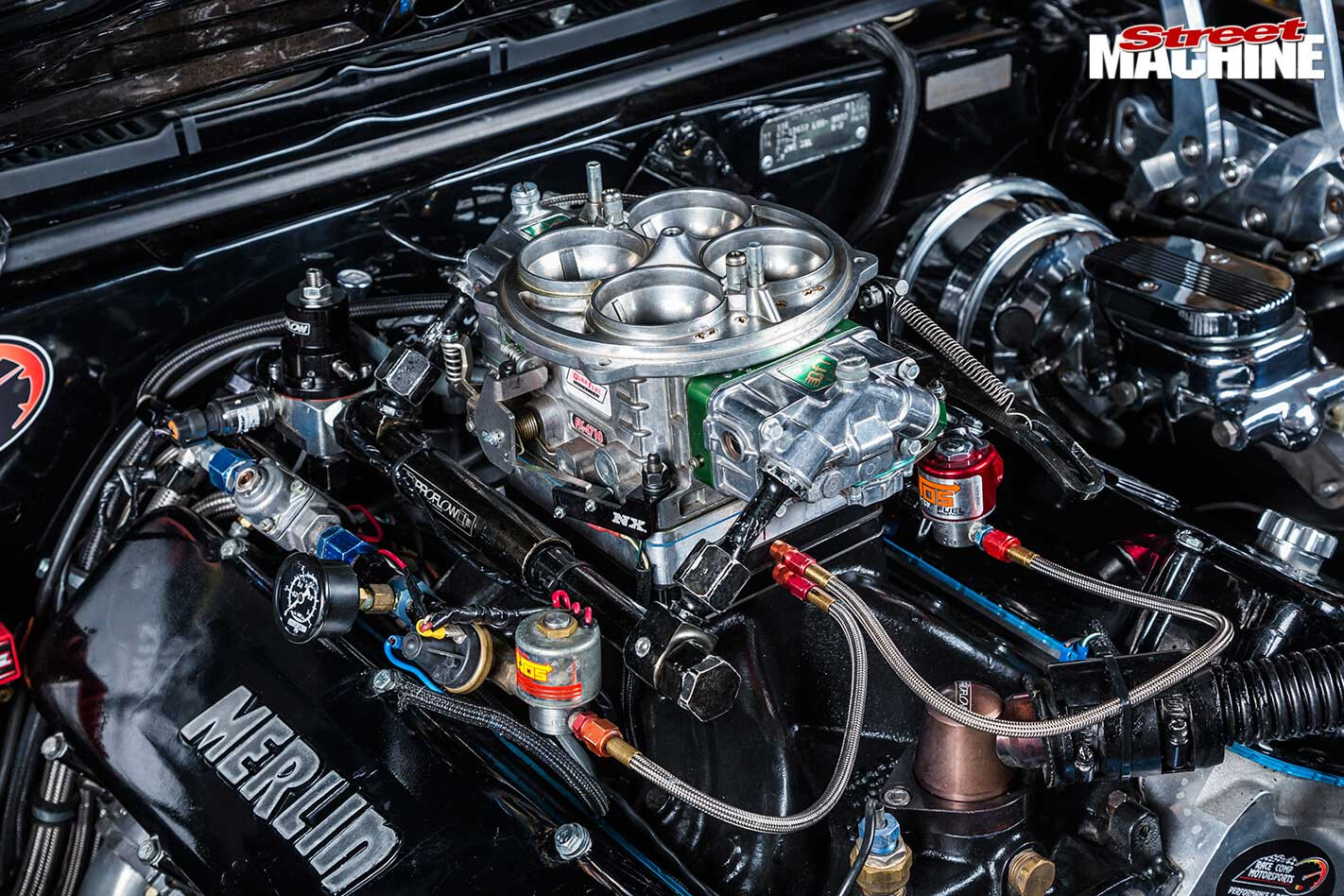 While it sees plenty of road miles, the nearly-nine-litre V8 isn’t maintenance-free like Aunty Donna’s ’05 Camry.

“Staying on top of the maintenance is a bit of a pain as you’re always checking clearances and lash,” Patto says. “I get away with the solid-roller on the street as I’m pretty conservative with valve-spring pressure and that makes a huge difference. I’d like to do Drag Challenge but it’d be too much on that engine; it’d kill it! I don’t want to be leaning over the front guards rebuilding half an engine, putting lifters in by the side of the road.” 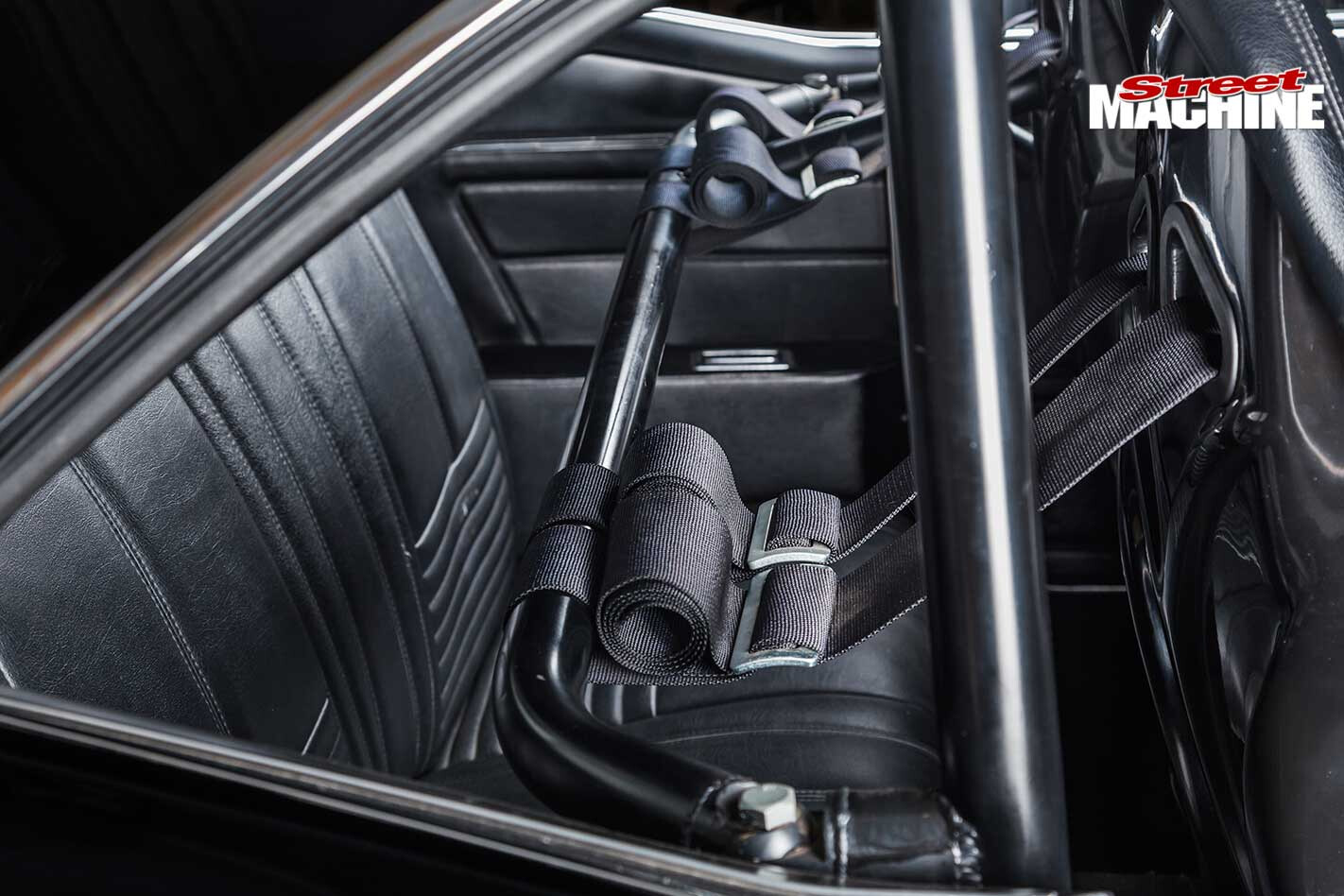 Patto is able to tread that fine line between having something too wild for the street and having an all-out race car, as he’s comfortable with how the Camaro performs its split duties. As the bloke whose name is on the rego papers, he’s the only person who needs to be at peace with the car.

As the speedo drive was removed from the gearbox, Patto uses a Jaycar heads-up display to work out how fast he is going. “It is handy for night-time,” he says. “It sits on a rubber mat on the dash and it doesn’t move around, even coming off the transbrake!”

“I didn’t want to put a ’cage in it, but that was a minimum requirement for ANDRA,” Patto says. “This car is one of the fastest cars I’ve owned, and I’ve had heaps of cars over the years. I could put it on a diet, but it is what it is. How far do you go with them? Do you gut them and turn ’em into a race car? Then you can’t use them on the road!” 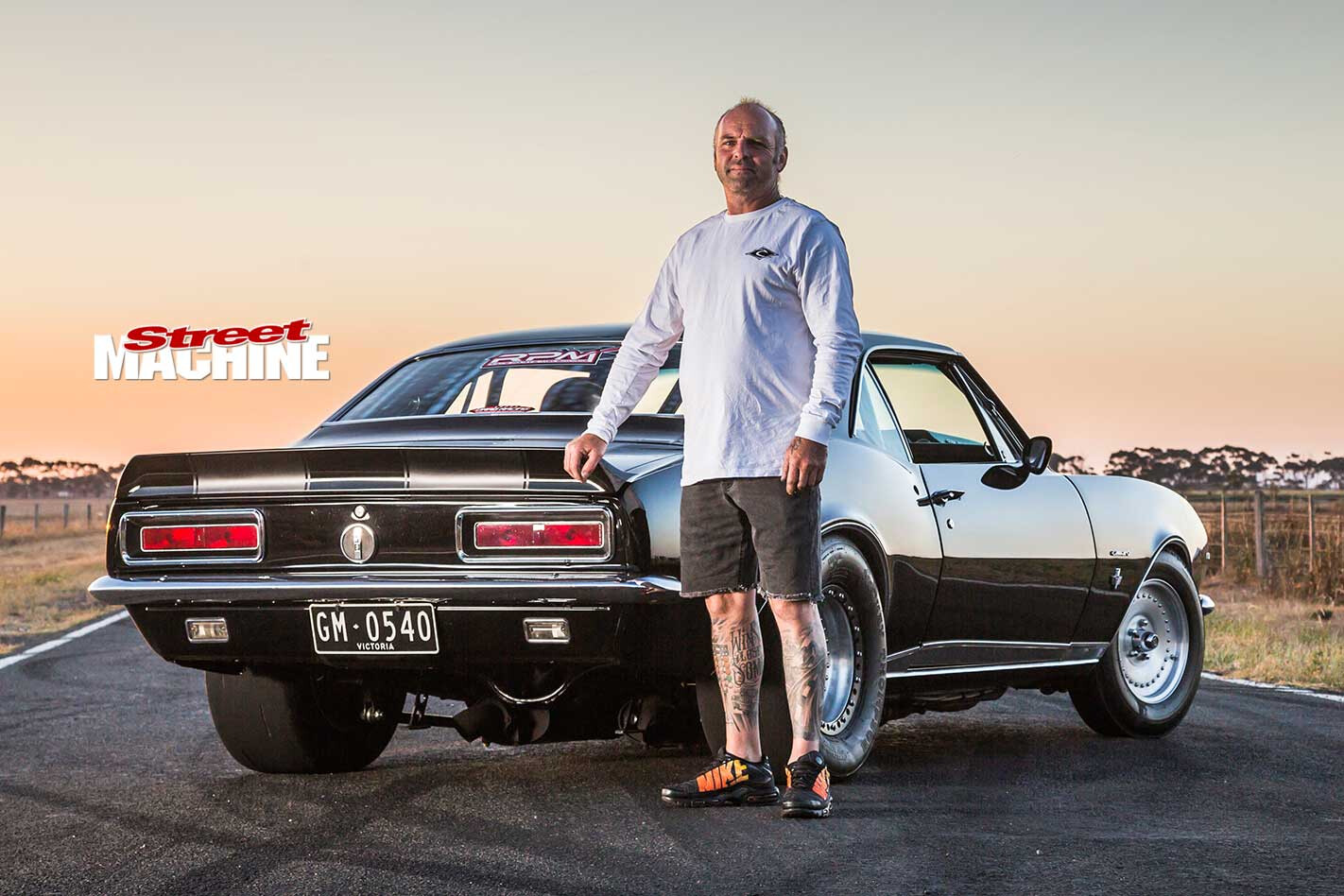 THANKS
James Melmoth from MCE; Wayne Cartledge from Racecomp Motorsports; Jason from Burko Transmissions; Danko from Adicted Performance; Zoran at Competition Engines; Jason at Dominator Race Parts Melbourne; my wife Carolyn and my kids Jorgia and Jesse for letting me do what I love