George located his ’67 RS in the States as a restored, matching-numbers, two-owner car. “It was a clean body with no rust, the interior was a great colour and in top condition, plus the previous owner photographed the complete resto, which was the key to my purchase.” 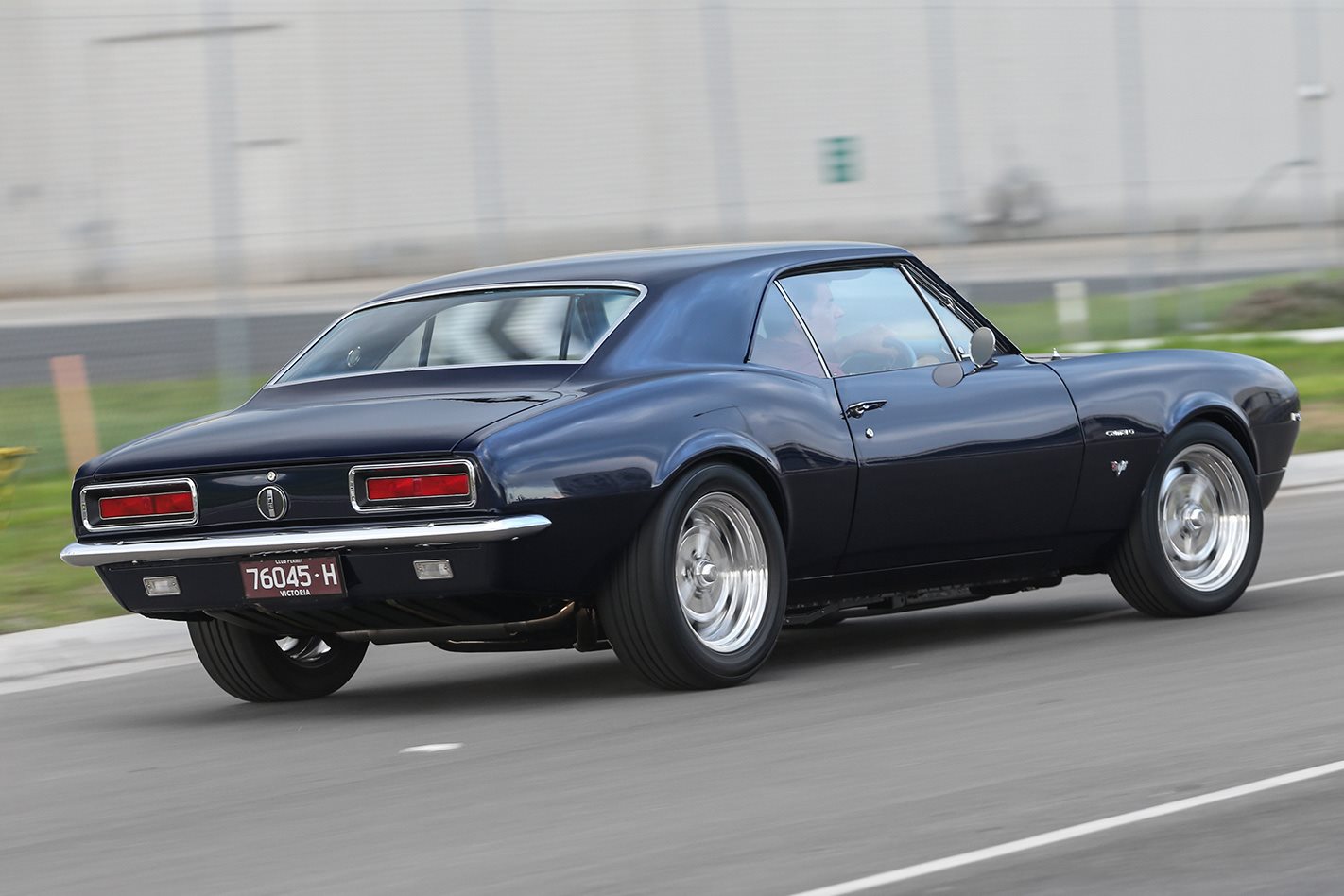 “We wanted to accentuate the body lines, with a few subtle modifications for our interpretation on how a ’67 would roll off the line today,” George says. “We didn’t want to bling it up; instead just let the body do the talking”

The car landed in Oz in 2011, and headed straight to Mike McCrudden at Glenlyon Motors in Brunswick East, Victoria. “George arrived with a reasonably original, unmolested Camaro. He had a wishlist, but it then grew,” Mike laughs. “I said to George, if you leave it LHD everyone will think that you bought it like that. Make it RHD and people are going to know that you built it.” 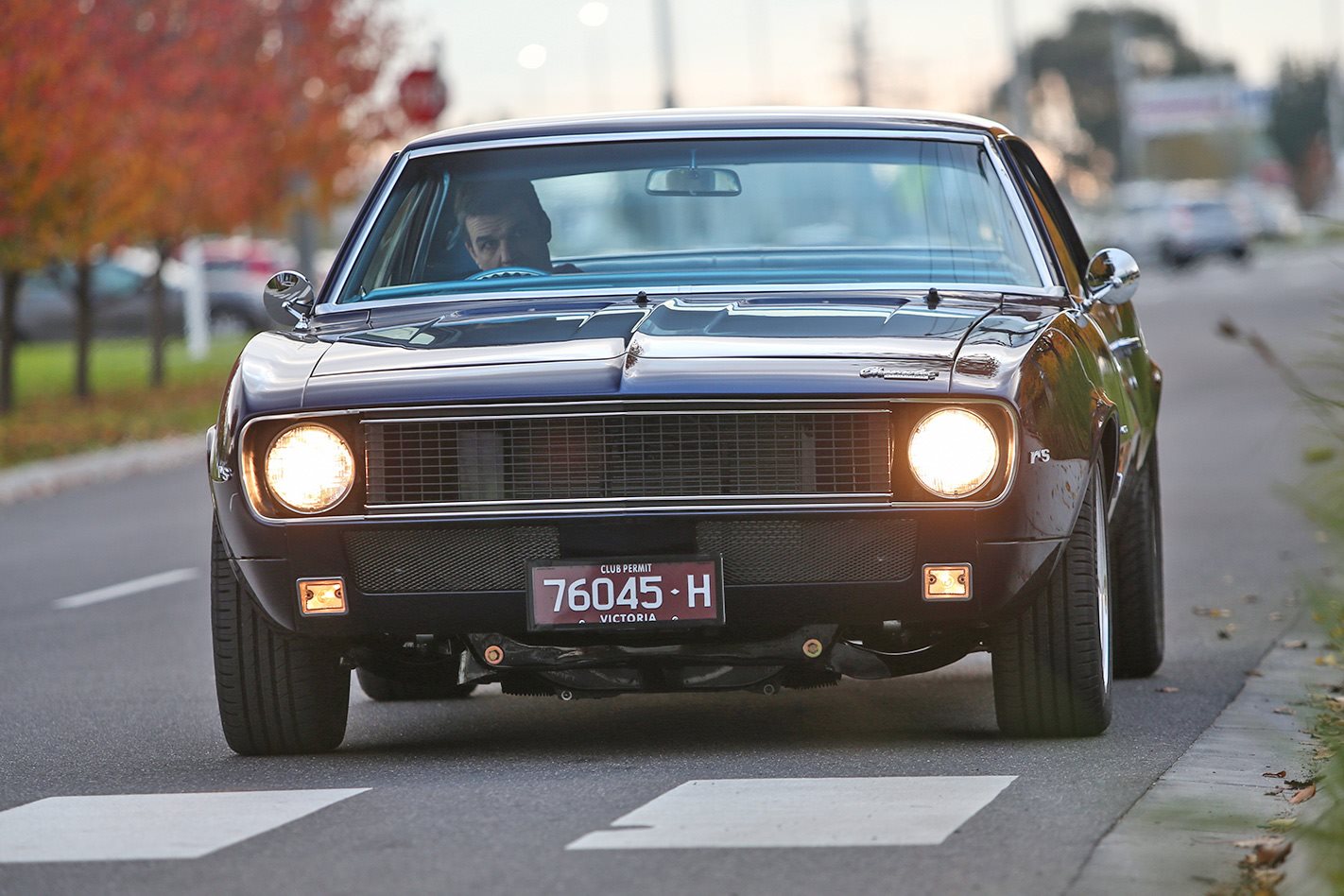 Miles Johnston crafted a pair of mesh inserts for the stone tray holes, which creates a visual diversion from the missing front bar. It’s a simple and effective nod to the pro tourer style

The inevitable snowball ensued. “I just got deeper and deeper, so I went pretty much the whole hog,” George says. 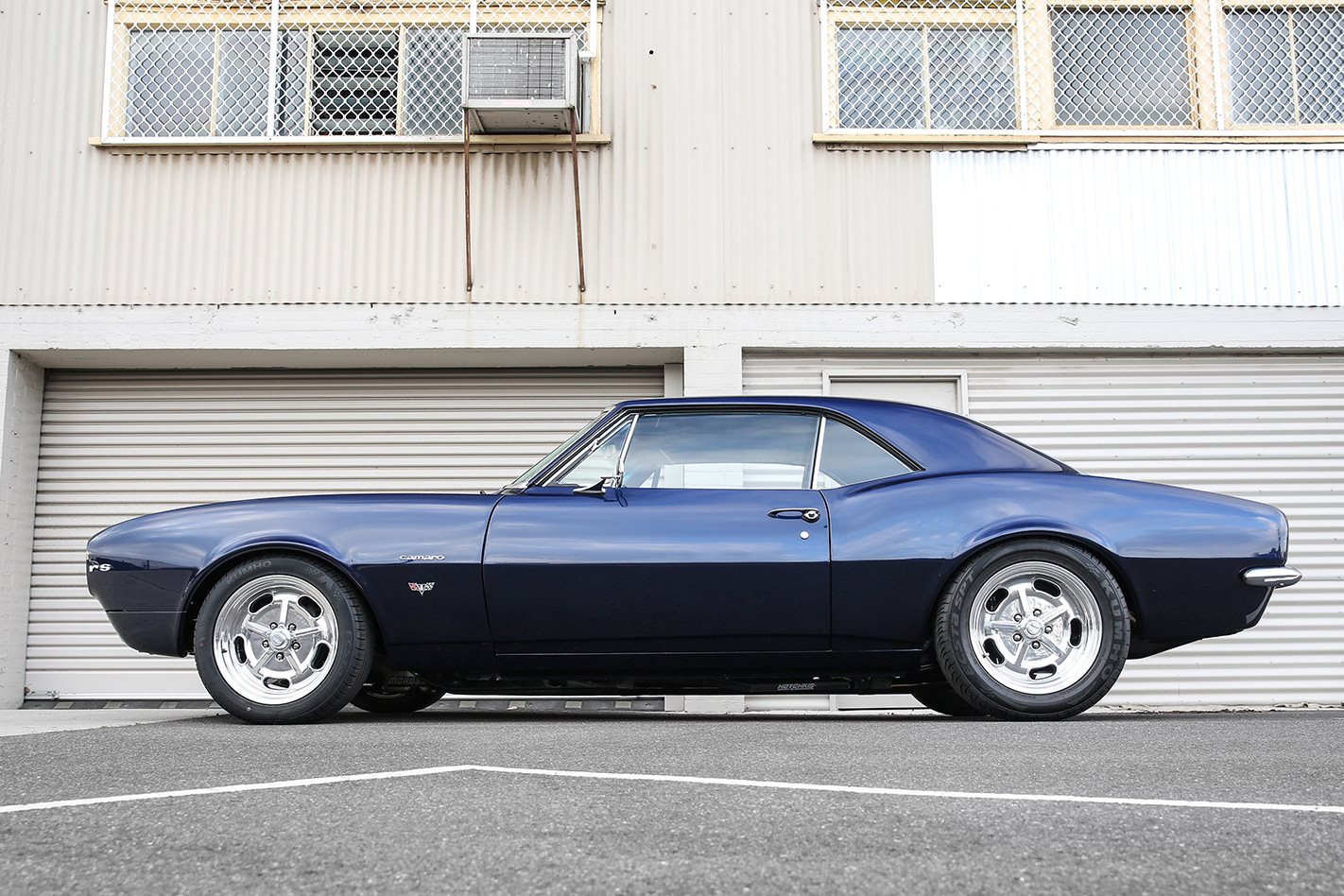 Over the next five years, Mike became the custodian of the RS, adding his expertise and calling in other professionals where needed. “Overall we agreed that the objectives were neat, hidden and tough,” George says. “Mike made lots of custom-engineered parts. He has a great attention to detail and we were pretty much on the same page.” 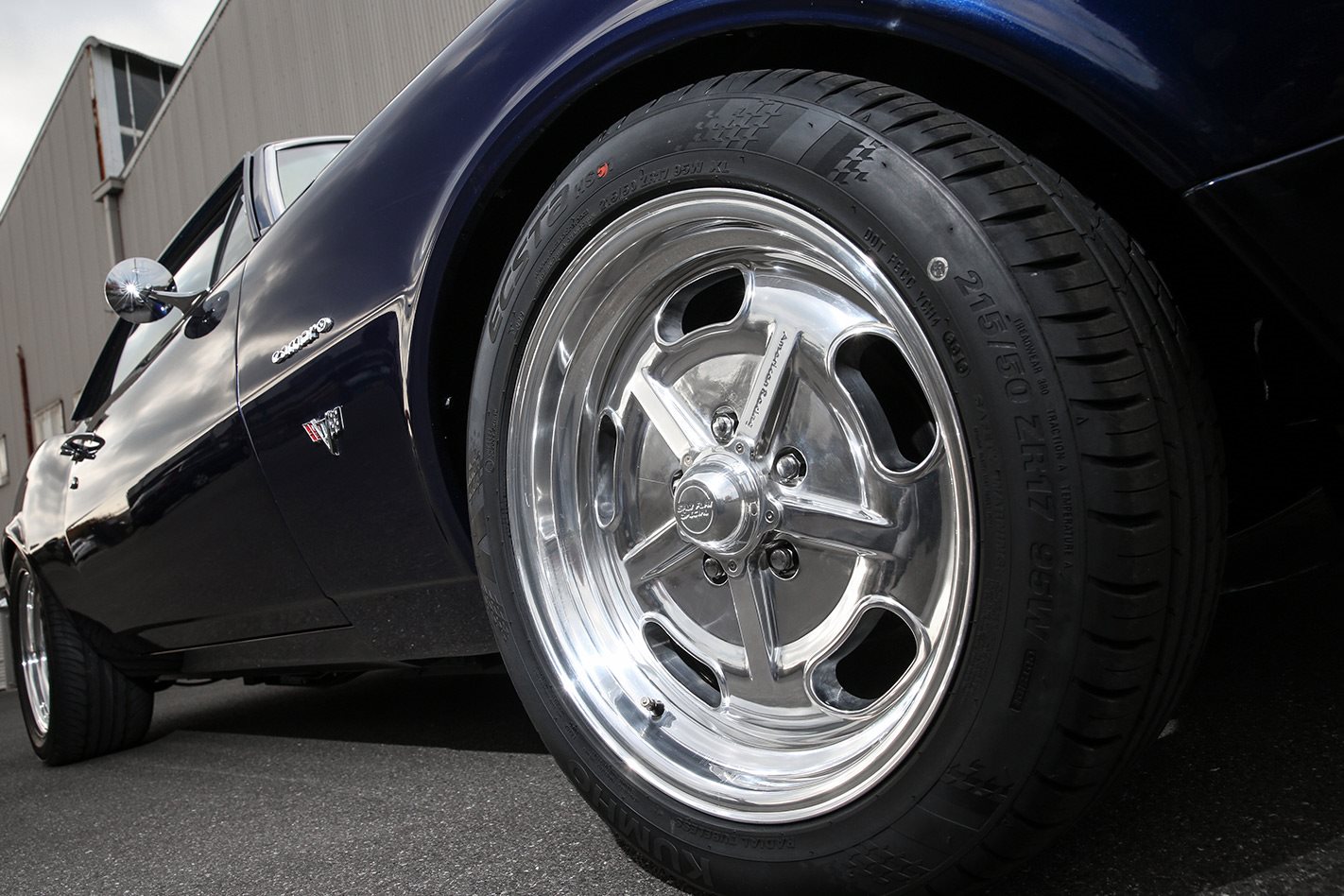 Mike and the lads at Glenlyon Motors stripped the Camaro of every last nut and bolt before embarking on the rebuild, which included the RHD conversion, a flat firewall and a heap of
performance upgrades, starting with the clapped-out SBC. 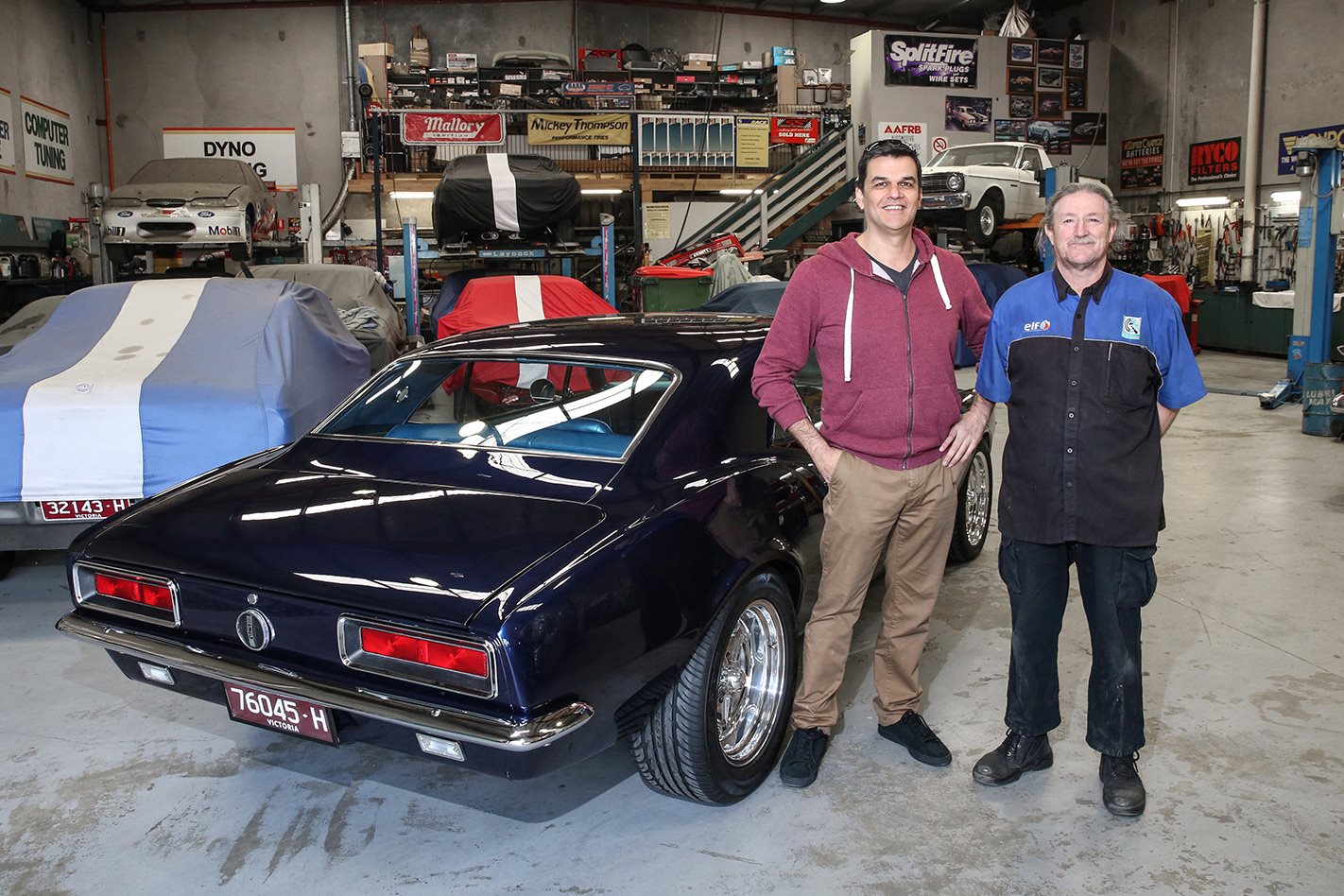 “People need to be dedicated to the car and the build process,” Mike says of his clients. “It’s the last few months that customers get itchy feet, as the final 10 per cent can take as long as the 90 percent; it looks finished, it even drives, but it’s not yet refined”

“We rebuilt the factory block so it’s still matching-numbers, even though nothing inside is original,” Mike says. First it copped a balance and blueprint thanks to Donnie at Wellco
Engine Reconditioning. Mike then added the go-fast bits. Up top is a Holley 650 DP feeding an Edelbrock Performer Air-Gap manifold through to Trick Flow heads packed with Trick Flow
lifters, pushrods, valves and springs. Below is a same-brand 284/290 cam. Mahle forged pistons pinned to six-inch Scat I-beams swing off a forged crank. “We believe it’s good for 420-
440fwhp – a bit of punch, but nothing stupid. It gets to 6500rpm pretty quick,” George smiles. 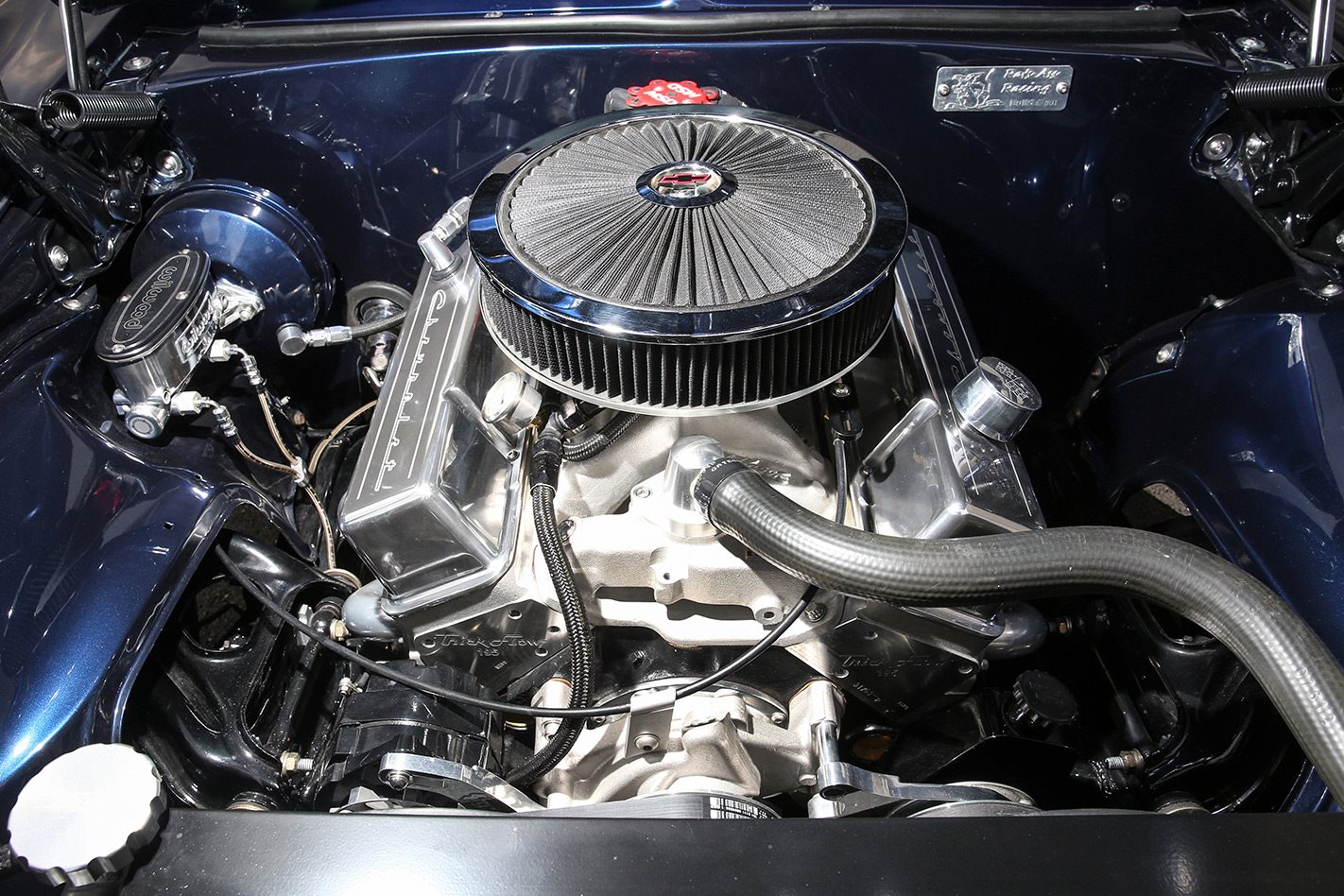 Under the bonnet, the guys opted for a minimalist look. Frank Campisi rewired the car, hiding the mess of spaghetti in the process. “If I can figure out a way to get rid of the water hose and accelerator cable, I will!”  George says. The Glenlyon lads also flattened the firewall, relocating the wiper motor and heater behind the dash

Behind that, George opted to bin the ’Gilde that it arrived with, opting for a rebuilt, factory-style M21 crunch box. The Glenlyon fellas reconditioned the ’box with new gears, keeping
the factory ratios. Further back, they beefed up the 8.5-inch GM 10-bolt with 3.7 Richmond gears, Truetrac centre and 31-spline axles. 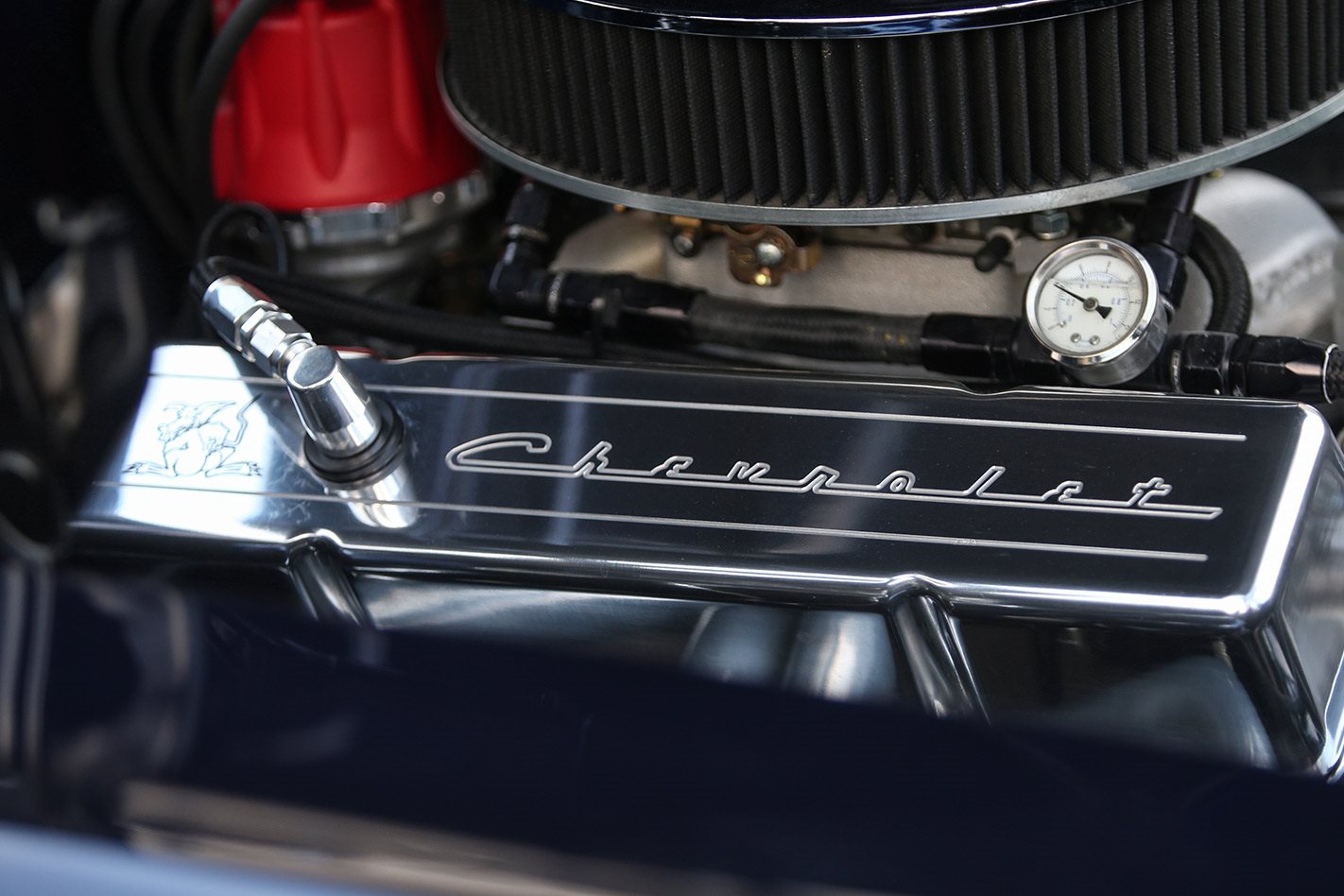 Underneath, Mike added Hotchkis sub-frame connectors and sway-bars for rigidity. QA1 adjustable coil-over fronts and a Hotchkis leaf-spring rear take care of the ride comfort, while
braking is now thanks to Wilwood four-spot calipers and discs up front with the original GM drums at the back. George opted to roll on 17-inch American Racing rims. “The only bling on
the outside of car is the wheels,” he says. 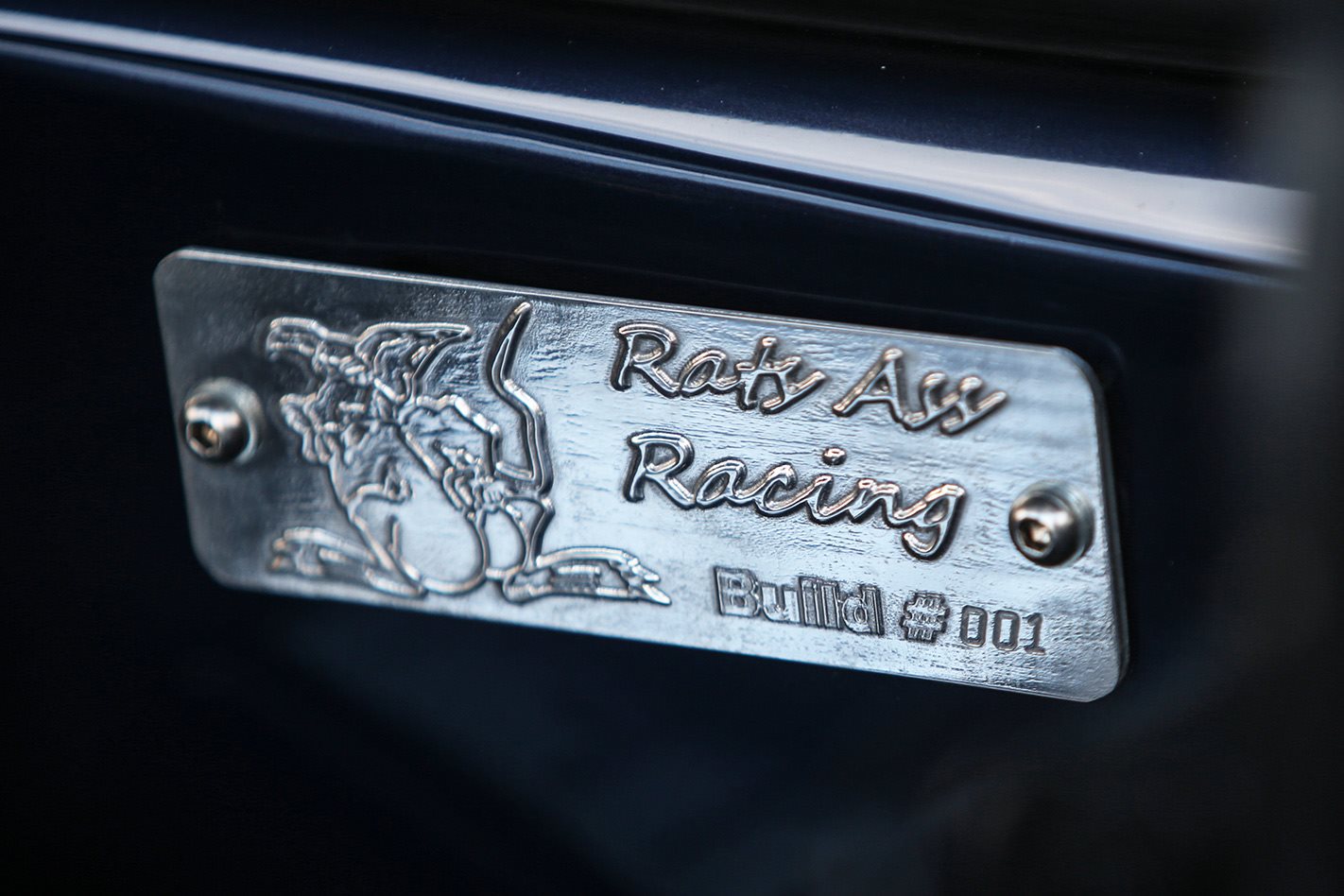 If Mike whips you up a full rebuild, you get a li’l under-bonnet plaque. Build #2, by the way, is the stunning orange Torana SM gave away last year, but George’s Camaro got into Glenlyon Motors first, having called shotgun five years ago

Outside, the hue is close to standard, with a modern twist. “The original GM colour is Deepwater Blue, a rare option at the time,” George says. “I wanted to keep the same combo as the
VIN number, though I went with Lotus Nightfall Blue, as it has more flake. Rob and Sharee Rowe from Superior Panel Services not only prepped and coated the Camaro, they also went to
town on the finishing touches to make sure all lines were tight.” 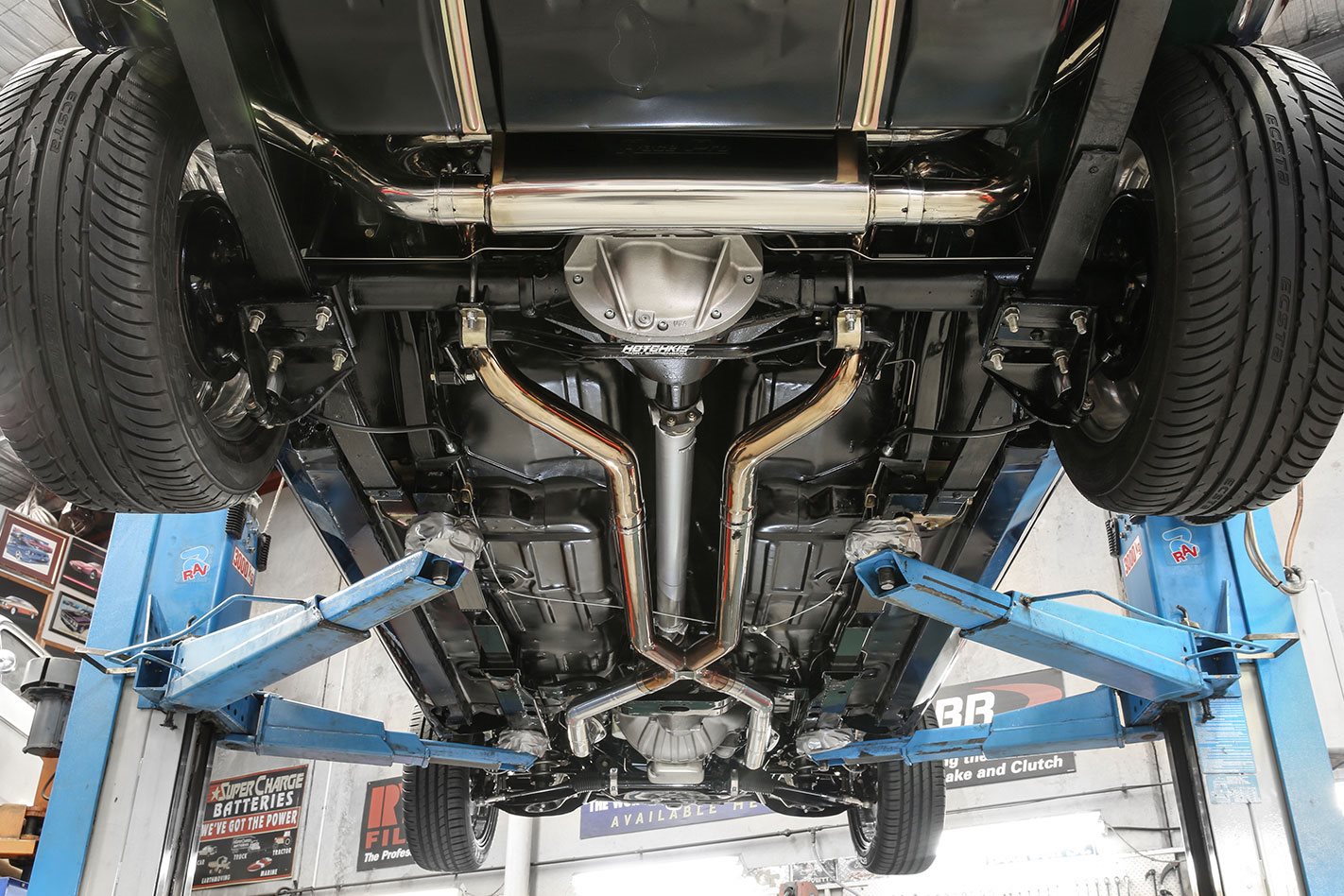 “While I’ve gone for a pro touring style, I didn’t want tubular control arms with urethane bushes, as I preferred rubber for a more comfortable ride,” George says. “I didn’t want a kidney-slapper!”

Next the RS headed back to Mike for the final fit-up. “The new stainless-steel window trims wouldn’t go on,” Mike says. “So I called Miles Johnston from Thunder Road as he’s probably
the only bloke I know that can do it. It left us for a six-week trim fit and stayed for six months. Miles is more pedantic than me! He did around 20-30 tiny things that weren’t 10/10
that came back here perfect.” Amongst the raft of mods are the radiator cover panel and front mesh inserts. Did you even notice it was sans bumper? “Most people don’t realise it is
missing. The inserts blend in with the nice subtle finish,” George says. 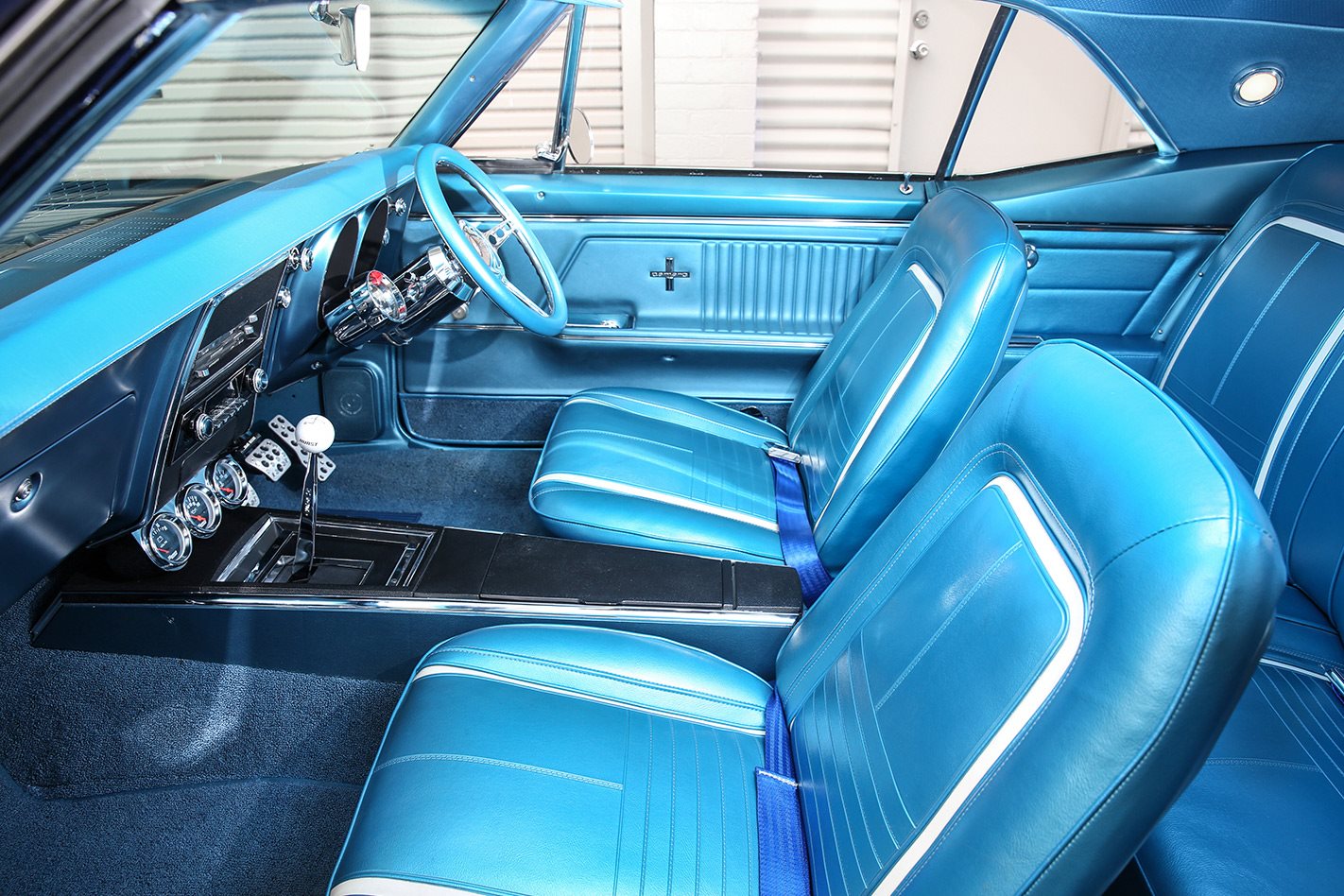 If you can tear your eyes away from the amazing Deluxe Bright Blue pews, you’ll notice the additions of a Budnik wheel, Ididit column, a couple of extra gauges and the first-gen Camaro Hurst shifter. You won’t notice the RetroSound radio though, as it mimics the original while providing modern features

Inside, the mods are spartan and well-thought-out. The eye-popping original trim remains untouched, accentuated with a Budnik tiller attached to the Ididit column, with a Hurst shifter
taking centre-stage. 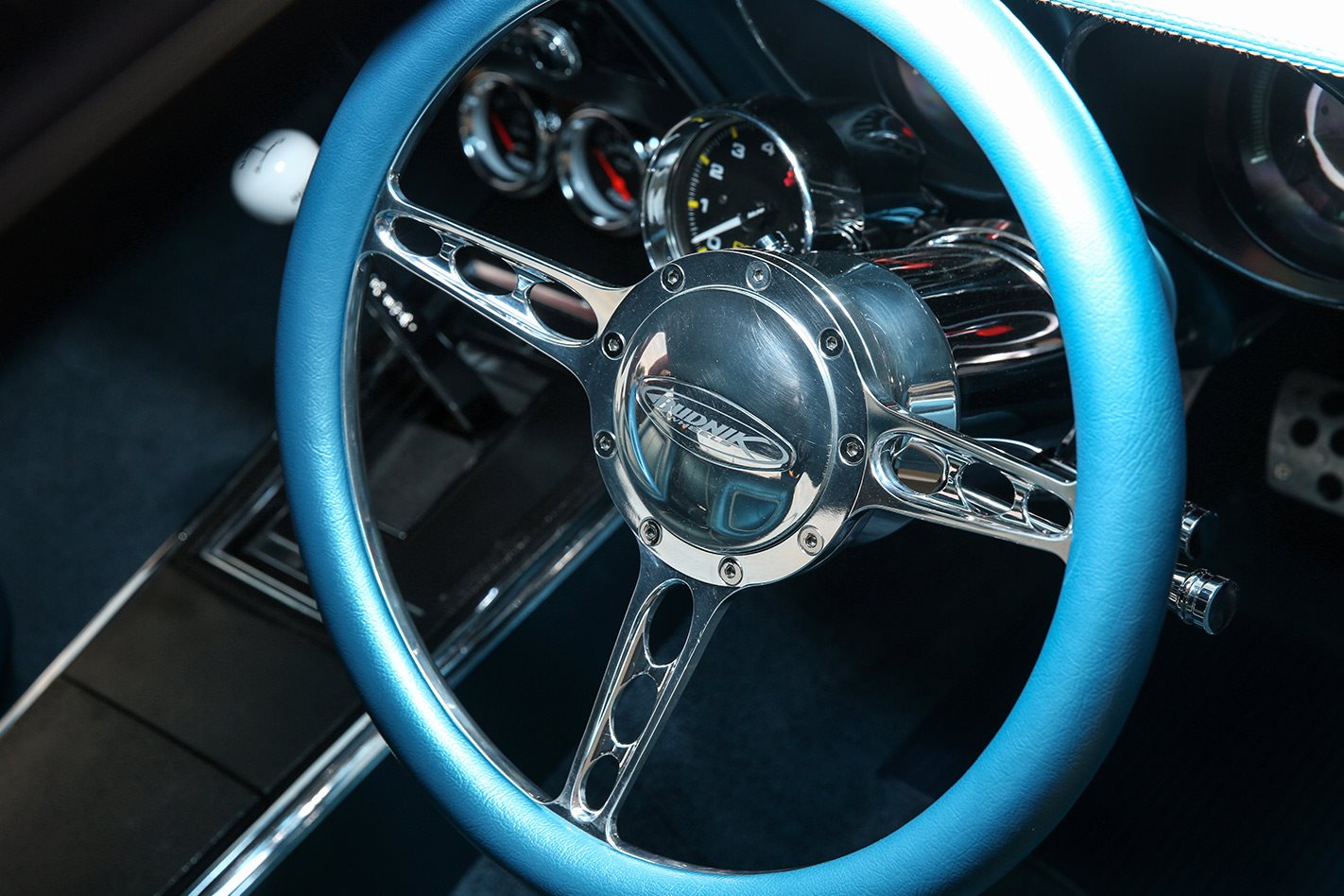 I’d ask George how comfy those seats are, but the photoshoot was his first real drive of the car. “The detail Mike has done to get it driving and reliable is amazing. It starts, stops,
doesn’t leak and will spin up pretty easily if the foot slips off the clutch. Apart from the paint that’s a bit over-the-top, it’s a fully functioning car,” George enthuses. 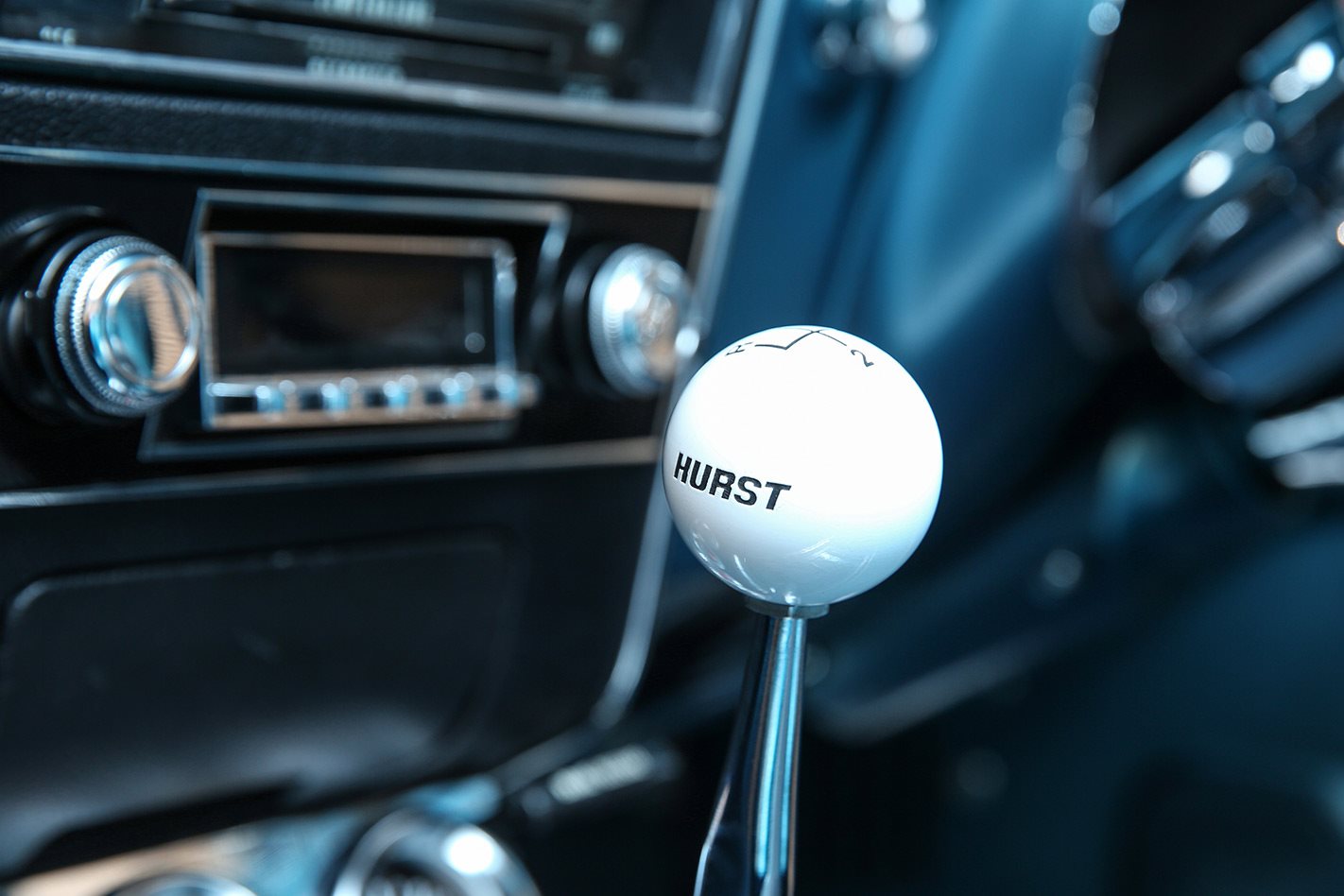 “Now I just want to put some kays on it! My boys Max and Alexi were five and six years old respectively when the car arrived from the US. Now they’re 10 and 11, so have spent most of their lives talking about the day we get to cruise the Camaro. I’ve already been offered good money to sell it, yet I can’t envisage doing it as it’s my childhood dream that’s become a reality.” 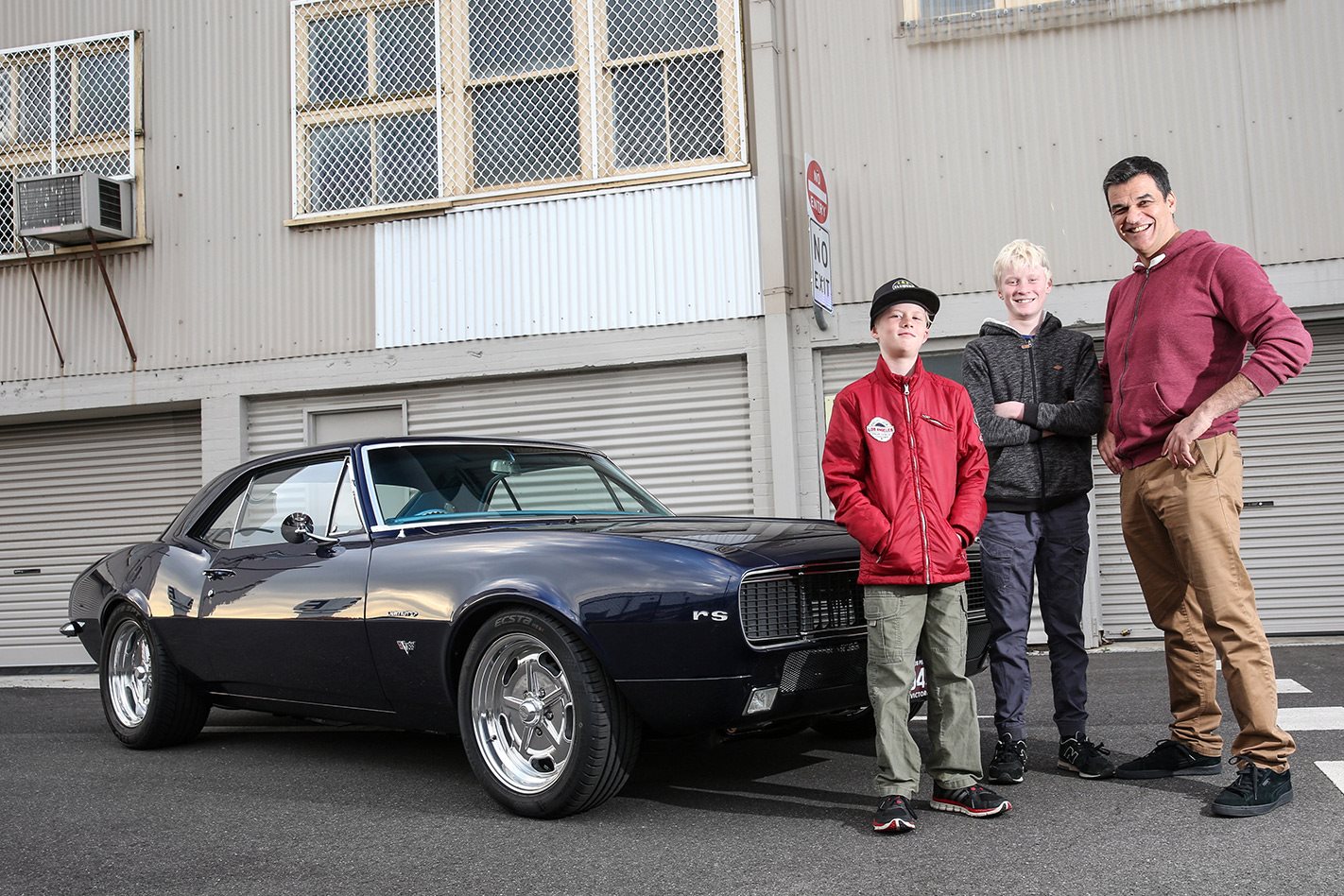