WHEN the sheets slipped off Adrian Woodley’s dazzling twin-turbo big block-powered ’68 Camaro at Summernats 26, you could have been forgiven for pigeonholing it as a chequebook build. Such is the quality of the car. But that couldn’t be further from the truth.

“It was just a bare shell with a rooted floor when we started,” Adrian said. “The dash and chassis were the only things holding it together, so we hacked out the firewall, plenum and rear parcel shelf and went from there.” 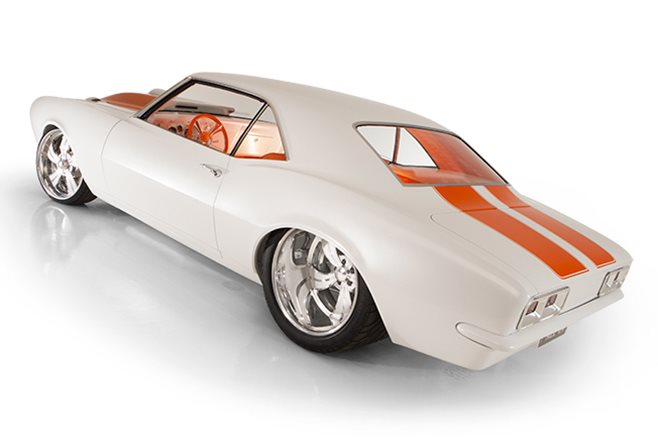 By ‘we’, Adrian is referring to the select group of blokes who contributed to the construction of this homebrewed masterpiece. The build only took two years, and when you consider that just five pairs of hands touched the car prior to its Meguiar’s Great Uncover debut, that’s very impressive.

The Camaro is a true owner-built machine and Adrian has the scars to prove it. Midway through the build he suffered a momentary lapse in concentration and copped an angle-grinder to the face, knee and arm. Sounds nasty but after a snappy trip to the emergency room, 10 stitches later he was back on the grind! 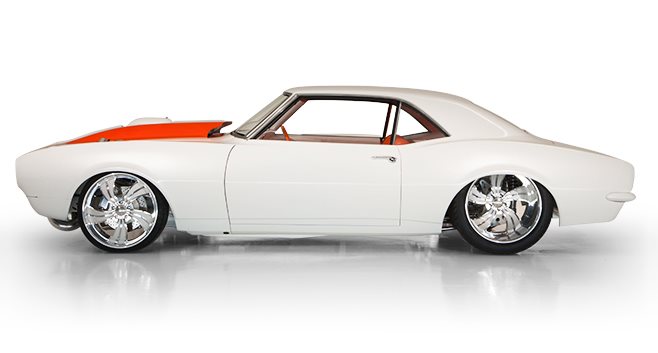 Adrian’s an auto electrician and his youngest brother, Blake, is a third-year apprentice painter, so he laid down the striking PPG Snowflake White paint and searing O’So Orange RS stripes. He also assisted Adrian with the bodywork, travelling down to Canberra from Wollongong each and every weekend to keep things ticking over. 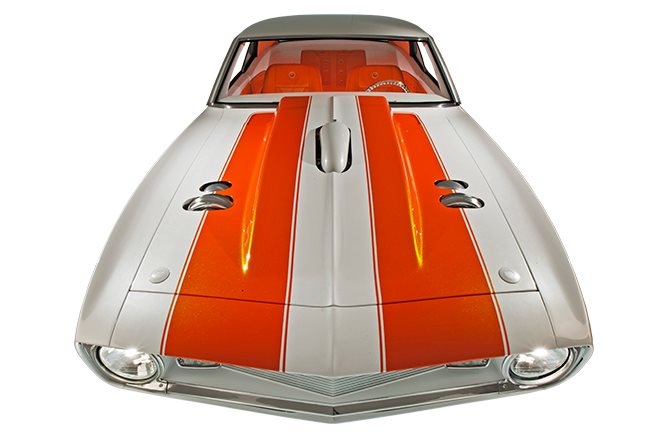 “Everything was no frills,” Adrian said. “I didn’t set out to build a show car — I just wanted something tough that had big power to take to Powercruise and thrash. But we had to put a floor in it and we got carried away with that. It came up really well so I thought: ‘Well, we might as well keep going’.”

The inspiration for the colour scheme came from the legendary Z11 pace car. 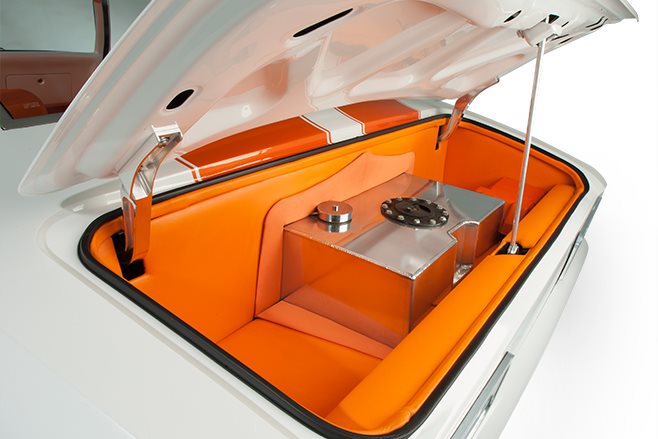 “I did a lot of work on Garry Reid’s ’34, so I was round there quite a bit. He had a model car collection in his office, and there was an orange and white Z11 Camaro pace car in it. I thought that the white and orange paint with orange trim looked tough as shit,” Adrian said. “When I said I wanted to paint my car white everyone said I was mad but when we rolled it out of the booth, they were scrambling to take it back.”

It might be a classic Camaro colour combo but Adrian’s ’68 wears it with a particular zest, due in no small part to a long list of owner-prescribed and performed body mods. 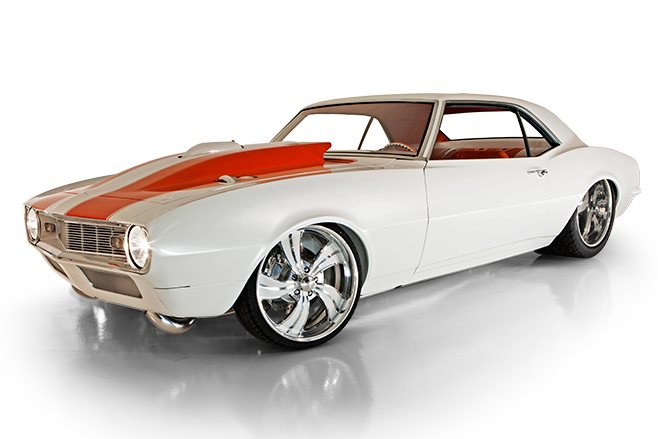 The rear bumper was shortened 4in and recessed into the body, while the front bar was turfed completely. The fuel filler and boot lock were shaved and the rear plate frenched, while the rear plenum, boot jamb and beaver panel were all seam-welded. The sills were extended and rolled to where they meet with the chassis rails, and the rear guards were tubbed and stretched four inches for the monstrous 15x20 Showwheels Twisted Vistas and 18½x29x20 Mickey Thompson boots.

The custom metalwork is even more intense beneath the bonnet, though it’s the breathtakingly detailed 510 cubic inch big-block that commands your attention. 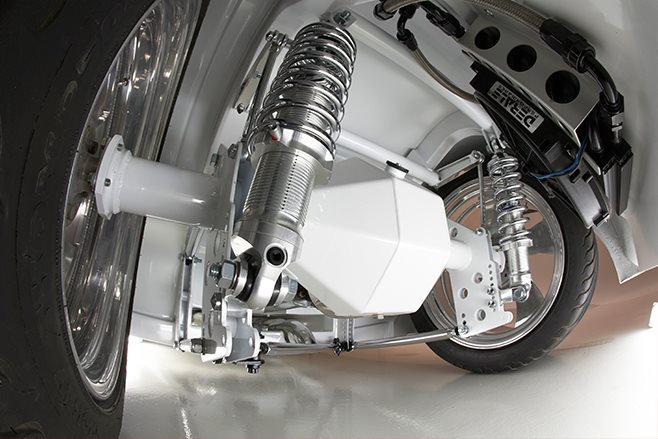 “It should make around 1600hp at the tyres but it’s yet to prove that on a dyno,” Adrian said.

The long motor was built in Ohio by Jacobs Proformance and shipped here, where Adrian and crew pulled it down to double-check the clearances and tolerances.

“Then we put some boost in it,” he said.

Indeed they did — with one of the finest-looking forced induction systems in the land. 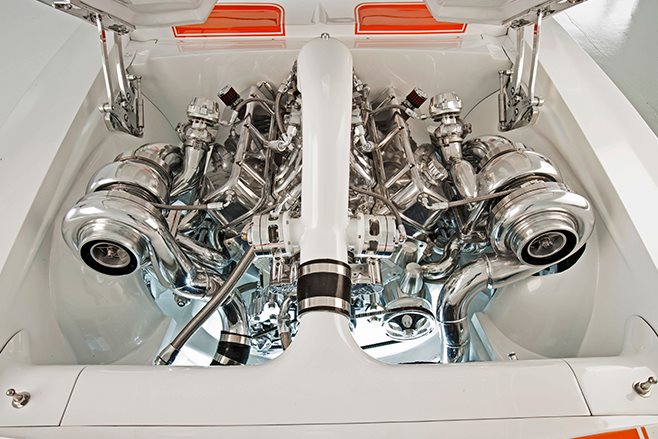 Never before has 1600rwhp looked so good, detailed to perfection and nestled in a beautifully symmetrical engine bay. Deleted wipers and a remote booster and master set-up keep the custom flat firewall clean as a whistle

A matching pair of whopping 72mm BorgWarner turbos are spooled by custom ceramic-coated turbo manifolds that, like the rest of the set-up, were built by Rick from Sumofab.

From there, dirty gases head south via a pair of four-inch dump pipes, while clean ones depart north, bound for a custom air-to-air intercooler so finely crafted and so beautifully integrated with the engine bay that it presents as part of the car’s bodywork. The inlet charge then rockets straight down the gullet of the hungry big-block via a modified 850cfm Holley carb and an Edelbrock Victor Jr manifold. 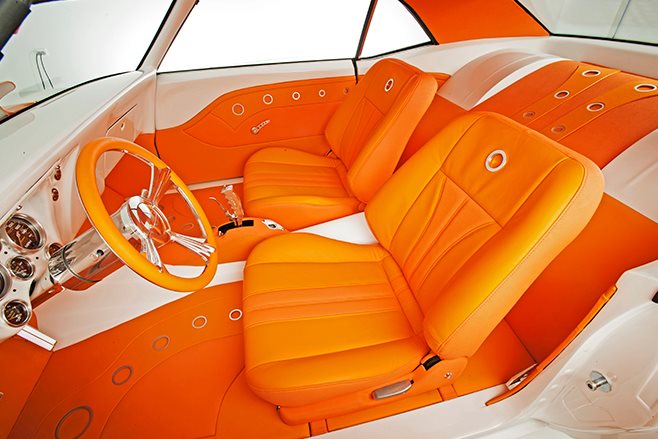 The custom sheet-metal dash houses Auto Meter instruments in a fibreglass cluster and blends seamlessly with the door trims, just as the sills are blended into the door jambs and the C-pillars with the tubs and parcel shelf. Little touches like the trimmed steel housing for the Hurst shifter and the bespoke billet trim rings complete the picture

The engine bay was essentially reconstructed to accommodate the monster driveline and associated hardware. The firewall features pronounced scallops for dump-pipe clearance, and it was redone three times until Adrian was happy with the shape of the trans tunnel.

Incidentally, that tunnel was built around the gearbox on the garage floor, using no fewer than 68 pieces of hand-formed steel. The inner guards were seam-welded to the front quarters after being modified to clear the massive turbochargers. 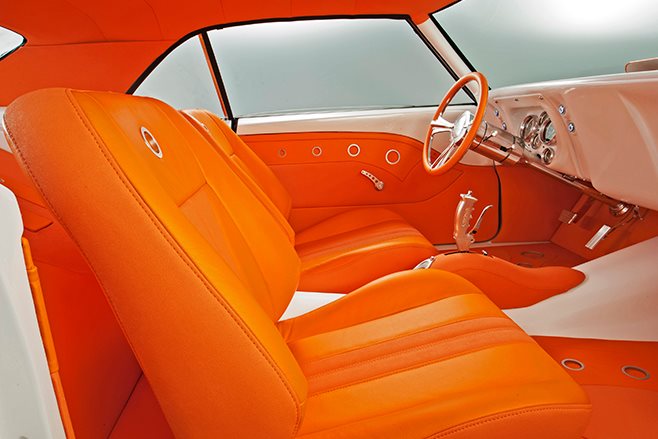 According to Adrian, the biggest challenge was the plenum. “We removed the grilles and wipers and figured out a new way to mount it but because the fuel pressure regulator, brake master cylinder and coolant reservoir are all mounted under there and need to be accessed from time to time, it still had to removable.”

With the fabrication work complete, it all had to be made to look pretty so the rear housings, exhaust system and wastegates were ceramic coated, while just about everything else was laboriously polished by Adrian and a good mate on a buffing wheel in the back shed. 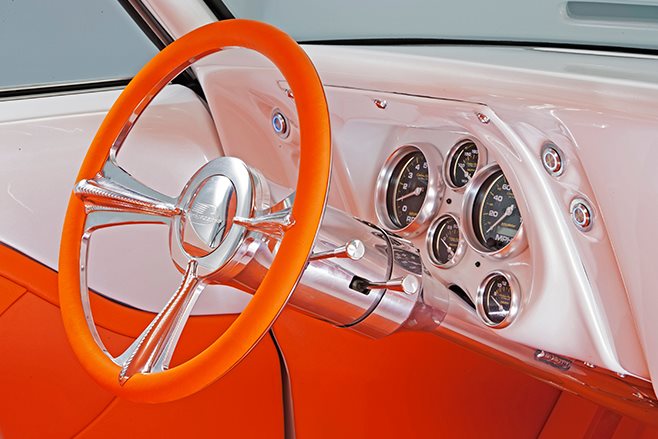 There’s plenty of bolt-on bling too, like the Jegs billet water pump, Billet Specialties pulley system and March Performance alternator and power steering pump, both of which are mounted with custom laser-cut polished aluminium brackets.

Rounding out the driveline is a Dedenbear Raceglide equipped with a TCE 3800rpm converter, which feeds the grunt to a sheet-metal nine-inch with a Strange alloy centre and Moser 35-spline axles. That’s mounted via a custom four-link with AFCO coil-overs to a three-quarter chassis, which in turn is matched to the standard Camaro K-frame. 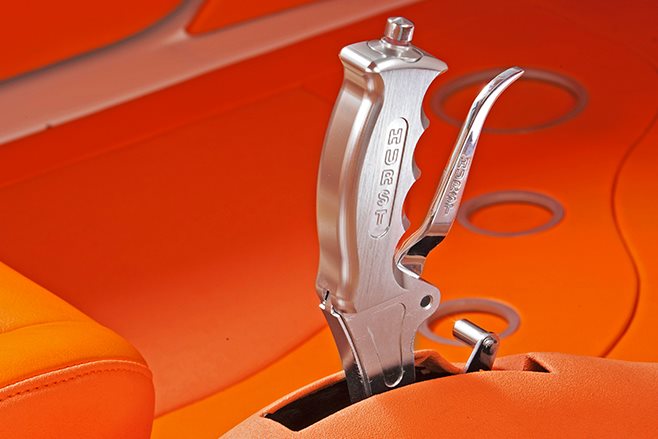 As per the original design brief, the car has bulk grunt and a chassis and driveline ready for action. But its Summernats 26 debut earned a Top 20 plate and was met with such critical acclaim that it’ll be a while before Adrian’s ready to smash the tyres off, though he did swing some hoops on the grass on Saturday evening.

“Looking at the car every day in the garage I got kind of numb to how good it came up but when it was unveiled it restored some perspective — it was pretty overwhelming. I’ll do the show thing for a while and then I’ll take it to Powercruise. But I’ll have to learn how to drive it first; it’ll probably scare the shit out of me!” 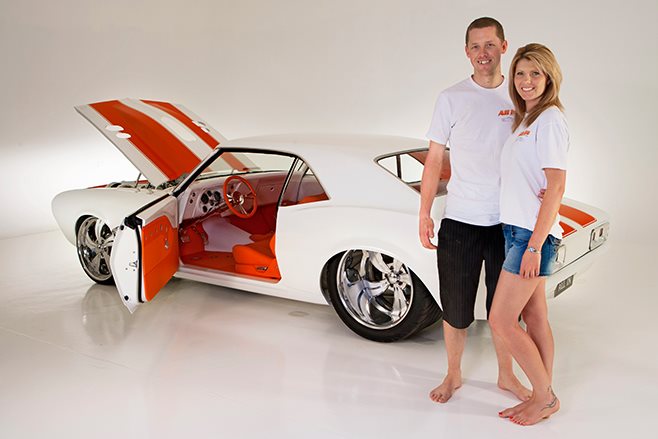