FOR the longest time, turbocharged race cars were considered the underdog by many in the street car scene. Lacking the power of the blown and bottled cars and with agricultural turbo technology lifted from already outdated diesel truck engines, these cars were admired for achieving with what they didn’t have as much as for what they did. But fast-forward a few years, and here you have Craige Lewis and his killer twin-turbo TD Cortina running regular seven-second passes on the strip and cruising on the street!

It all started for Craige about 10 years ago when he was out looking for an XW Falcon, but instead stumbled upon this Cortina. “It had just 59,000km on it with a tough 347 Windsor in it and it was very neat. I found it on eBay,” he says.

Craige took the then Polar White Corty out to Sydney Dragway, where it carded a 10.9-second pass and was booted off the track for having no safety gear! This prompted Craige to give the car a full overhaul. He contemplated rebuilding the engine with an F2 ProCharger on it, but after some consideration decided that more cubes and turbos was the go. We’re glad he did!

The rebuild resulted in the Cortina losing its factory white hue, with body and stunning new Sandstorm Metallic paintwork handled by Dave at DRC, Grubbie and Steve Bosilkovski. Mods have been kept to a minimum and anything not painted is either black, chrome or polished alloy – grille, wheels, interior, everything. It pulls off the mild sleeper image so effectively that only those in the know would guess how fast it truly is. Craige has entered the car at a few local car shows and even come away with some trophies.

The Dupont Sandstorm Metallic paint suits the Cortina perfectly, coupled with the factory-styled pinstripe, badges and skinny-and-fat Billet Specialties Street Lite wheels, which measure in at 3.5in and 10in widths respectively. There is no real clue that this li’l weapon has 1800hp under the bonnet!

With the plan for the engine involving more cubes and two turbochargers, Craige made sure the extra power was backed up with mini-tubs, rollcage and radial tyres. When you consider the early performances of this machine, it seems he got it very right!

It all starts with the Dart 8.2-inch-deck iron block, Sonny Bryant crankshaft and Trickflow 220cc cylinder heads. Then there’s the small matter of the pair of 70mm Precision turbochargers that sit below the bonnet line, sucking in massive amounts of air and stuffing every last one of the 363 cubic inches with their evil, pressurised best.

But the interesting part of this donk is that, while arguably the best turbo race engine shop on Earth contributed to the build with tuning advice, it was in fact bolted together Down Under. Take a bow, Frank from Dandy Engines! Dandy collaborates with US-based Pro Line Racing on many of its more hardcore builds, as the American shop’s knowledge and experience in state-of-the-art turbo mills is second-to-none.

There isn’t much room in the little Cortina’s engine bay, but the boys managed to squeeze everything in that they needed, including all the plumbing for the turbos and exhaust. They even found room to build and fit a custom radiator with thermo fans to keep the 363ci SBF cool for street duties

This bad boy is filled with top-shelf gear like Oliver rods and Diamond pistons, but it’s the contents of the heads and the intake tract accessorising that are of most interest. With instructions coming to them from the custom Pro Line-grind camshaft via Aussie-made Jet Engineering pushrods, the Ferrea valves, PAC springs and Jesel lifter/rocker combo get the good stuff in and the bad stuff out in short order – the latter leaving via a set of awesome custom stainless headers that Matt from Pro Street Industries put together. Each four-into-one supports a single Precision turbo with the leftovers exiting behind the front wheels. On the intake side of the equation, each turbo blows into a common pipe fitted with dual ProCharger blow-off valves that aims straight at the Accufab 90mm throttlebody.

There is no intercooler in sight! Craige doesn’t have a need for it, as he runs the beast on E98 methanol on race day and E85 for street duties.

The fabrication in the engine bay is stunning, and every bit the match for the metalwork in and under the Cortina. Underneath you will find tubs, anti-roll bar and a fabricated Ford nine-inch. In the cabin, there’s a multi-point rollcage, which is needed with the 200mph barrier fast approaching! The front seats have been replaced by a pair of RCI race seats retrimmed in brown vinyl by Aqua’s Auto Skinz. There’s a newly fabricated dash in there as well, and the old factory gauges have been replaced by new Auto Meter items that give Craige and the crew all the information they could ever need. Engine sensors galore make their way to the Holley Dominator EFI and all of them are recorded for future reference and analysis after a run.

It’s not just the engine management, tuned by Kon from Wollongong Automotive Services, that’s important in the horsepower equation, as power without control means next to nothing, especially when you’re trying to get around 1800hp to the ground via Billet Specialties Street Lite wheels wrapped in Mickey Thompson 275/60 Radial Pros. Power management is what small-tyre/stockish-suspension street car racing is all about.

There is still room for some groceries, even though most of the boot area is taken up with the wheel tubs and a tank that gets filled with ice on race days to cool the transmission down after each run. The other tank is for water overflow, engine breathers and a diff breather

The Holley Dominator ECU looks after a host of items including boost control and delivery. Unlike a conventional boost controller that senses intake manifold pressure and alters the amount of boost accordingly, the ECU senses exhaust back-pressure and applies a regulated feed of carbon dioxide (from a bottle in the cabin) to the wastegate. Not only that, it’s adjustable in fraction-of-a-second increments and by miniscule levels of boost pressure, so you can ramp power in (or out) as you go down the track.

The interior largely remains stock except for the front RCI race seats, B&M shifter and the usual Auto Meter gauges. It complements the subtle, tough but practical theme of the car, which is what Craige was aiming for all along

Fellow racer Fred Soleiman from Protrans was called upon to build the two-speed ’Glide to back the potent Ford, and he didn’t pull any punches. The Cortina now benefits from one of Fred’s top-shelf Reid-cased Powerglide builds and a PTC converter – both up to the task of getting the power down without robbing too much of it along the way – and without going up in smoke!

The boot houses an ice-filled tank on race day that cools the transmission down after each run. Craige drives the car up to the startline, launches, completes the run, then drives it back to the pits. How good is that? Also in the boot is a 65-litre fuel tank that sends the juice up front via a Holley Black pump to a header tank that then feeds the stout small-block by way of an Enderle 100 fuel pump.

The Ford nine-inch rear end uses Race Products 40-spline axles with 3.5-ratio Pro Gears. QA1 coil-overs plant the rear, and there’s Wilwood gear at each corner to stop the killer Cortina after another 189mph-plus run. It’s doubtful they’d do a great job of pulling up the seven-second bullet by themselves though, so there’s a Stroud ’chute mounted just above the number plate. Craige mounts it come race day and swaps the stock boot lid to his race version, which has a custom wing mounted to it. So far he has run a best ET of 7.50@189mph on the quarter-mile and 4.80@153mph on the eighth.

Is there more in it? We asked Craige that exact question, and all we got was a smile. When pressed, he said he’d like to run 200mph with the car but that it’s too heavy to do it and he doesn’t want to cut it up. The driveline might find its way into a notchback Mustang in the future. That was just about all we could get out of him.

Craige has logged a heap of timeslips at the drag strip and quite a few miles on the street. “I drive it frequently on the street, whether it’s for a cruise with the family or even taking the kids to school,” he says. “It runs and drives perfectly, even in hot weather.”

He isn’t kidding, as we’ve seen the videos of it on the street. A genuine seven-second street-and-strip car? You betcha!

Craige’s Cortina is transformed into a ballistic missile with ease come race day. Craig simply swaps over to E98 race fuel from the regular pump E85 and a different tune is loaded on the Holley Dominator ECU. He then removes the standard boot lid and replaces it with another equipped with an alloy wing. The rear number plate is removed and a custom chrome-moly parachute bracket installed, with the number plate then re-attached a fraction lower. Yes, it is all about the street-car ‘look’. Even the tyres remain as per street duties, with the M/T 275/60 Radial Pros packing more than enough grip to get the job done. Lastly. the exhaust pipes are dropped, and Craige is then ready to pump out another mid-7sec pass at around 190mph! 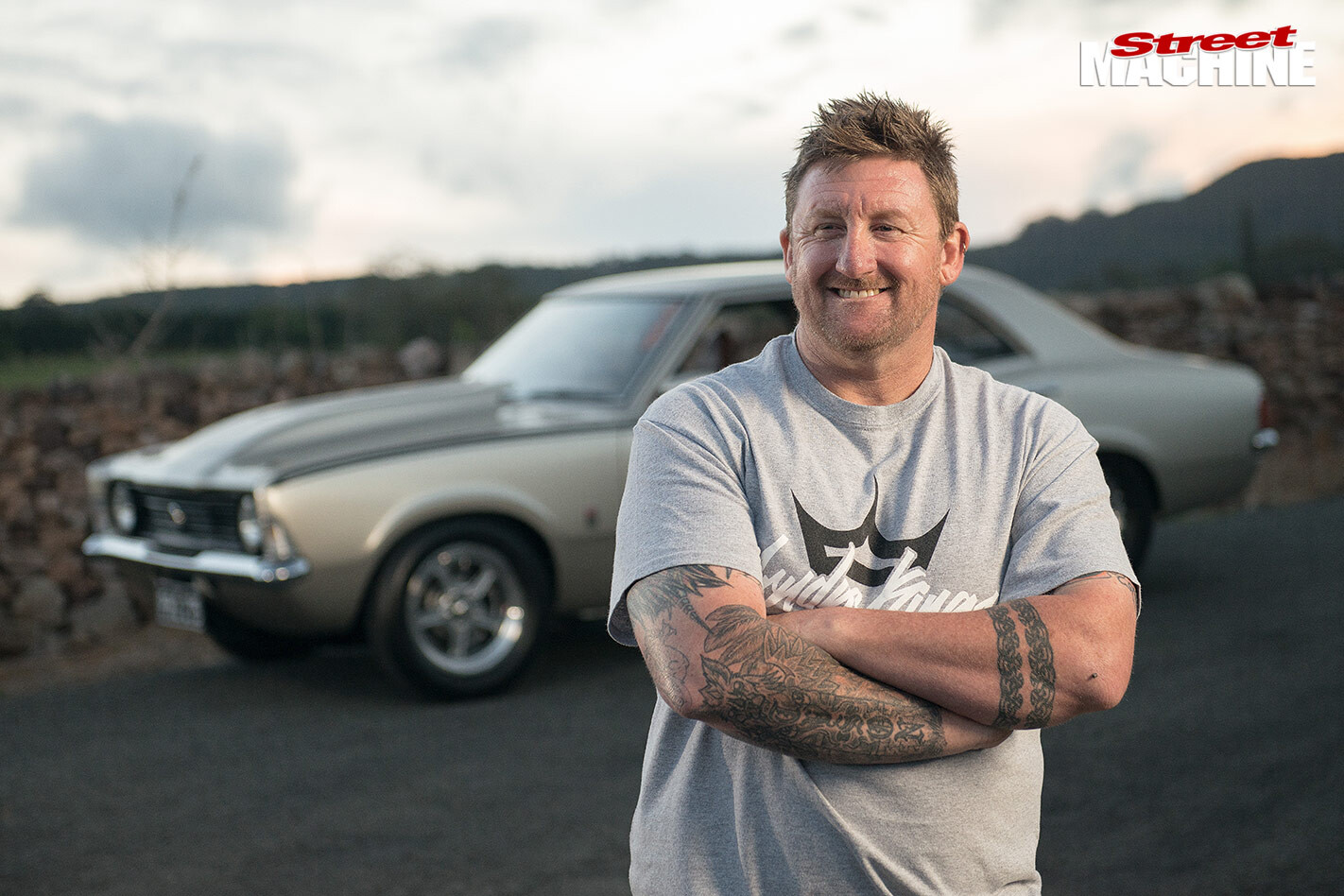