IN THE 20-odd years that this Torana has been in David Hellyer’s keeping, it has gradually evolved from a modest 253-powered SL/R 5000 replica into a Summernats Top 20 stunner. It also happens to be one of the quickest naturally aspirated sedans in the country, having run a stonking 7.57@178mph on its very first outing.

5
"It's a unique feeling; it's like a truck running up your arse!" says David of the Torana's mid-7sec performance

“When I first bought the car I stripped it down, built a 308 for it and put a drop tank and V5 Simmons rims on it,” David says. “I used to get hassled by the cops and defected a lot, so eventually I decided to pull it off the road and turn it into a drag car.”

In went a set of mini-tubs and a VN-headed nitrous 308, which netted a healthy 10.3@130mph pass. David raced it for a while before the inevitable happened, and he went in search of more power. The solution was a turbocharged, methanol-ingesting 355ci Holden, but after kicking off his concreting business, David never found the time to race the car in that guise. 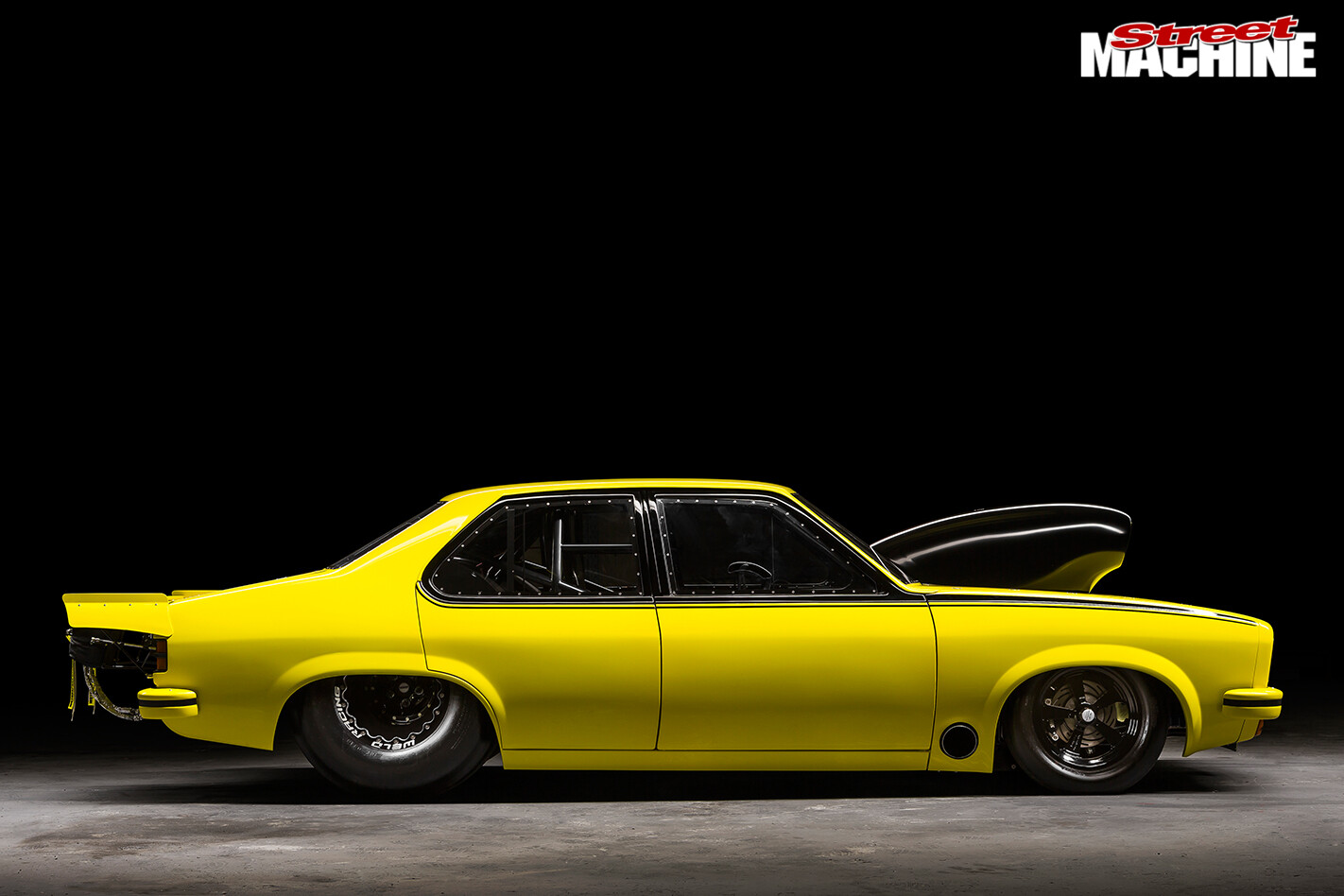 “Four years ago I pulled the covers off it, stripped it to nothing and started again,” he says. “I probably should have started with another shell, but for sentimental reasons I wanted to stick with the same car – not that there’s much of it left!”

Setting out to build a car to take on the top dogs in the Pro Street Unblown ranks, David enlisted JL Racecars to take care of the chassis and fab work. “It’s a three-quarter chassis with double frame rails, basically a Pro Stock style of car,” he says. “It has stock front rails, and a chrome-moly strut front end.”

5
In spite of the Torana's innumerable other merits, the way it sits is David's favourite aspect of the car

The steel roof and rear quarters remain, albeit modified to allow for a set of Mickey Thompson 33/16/10.5 tyres. The remaining body panels are fibreglass items from Alfa Fibreglass, though you’d do well to pick it, such is the quality of the work by Kingpins Kustom Paint & Panel, who were tasked with the body and paintwork. You can’t miss the colour – it’s a practically fluoro shade of HOK yellow that Owen Webb quite rightly suggested would make the car pop during its unveiling at MotorEx 2015. The engine is a thing of great beauty – 632ci and 1300hp of unassisted, unadulterated good times. BK Race Engines took a Donovan alloy block and stuffed it full of rad gear, including a Callies crank and rods and Diamond pistons, lubricated by a Peterson dry sump pump, and topped with a pair of Big Chief alloy heads with Victory titanium valves. A CFE sheet-metal tunnel-ram wears twin BRE 1150cfm carburettors, with an MSD crank-trigger ignition set-up setting fire to the fuel. Fred from Protrans pieced together the Turbo 400 transmission, while the rear end runs a Pro9 alloy housing and 40-spline Strange full-floating axles, and is suspended by AFCO coil-overs. The wheels are Weld AlumaStar 16x16in beadlocks out back and 15x3.5in American Racing on the steering end, and they look the business, accentuated by the ground-hugging stance.

5
At this level every gram counts, so the interior is a sea of carbonfibre. There's no shortage of barwork though, because safety was an absolute priority

Inside the cabin it’s carbonfibre for days, with the centre floor, door trims, tubs, and seats all fashioned from the lightweight stuff. With its alloy block, chrome-moly chassis and fibreglass body panels, the car weighs a neat 2700lb with David on board, which helps explain why it’s so damned fast. In testing at Sydney Dragway in July, David first ran the car out to the 60, then to half-track, before driving it out the back door for an 8.0 on its first full pass, complete with a pedal and the ’chutes out early. The following day he’d planned to just run a 60-foot time to find his feet again, but with the car tracking nice and straight, he stayed into it. “The missus picked me up at the other end and she screamed that the car had gone 7.6,” David says. “I was stoked.” The main goal of the build was to take the top spot on the APSA Pro Street Unblown list, so to comfortably clock an unofficial class record on the car’s second-ever full pass was a big achievement. David went on to back it up with a string of 7.6s, then put a bit more power in the car to run as quick as 7.57@178mph. That’s a serious pass for a naturally aspirated car on a 10.5in tyre.

5
Those enormous Mickey Thompson-shod 16x16 Weld beadlocks are held in place by a Pro9-housed 9in with 40-spline Strange full-floating axles. AFCO coil-overs smooth out the bumps

“Once we get it sorted it’ll be consistent, too,” David says. “It’s basically a six-second car with a seven-second engine, because I wanted it to be safe and reliable. I could have gone with a turbo set-up or a blown Hemi and it would have looked the part, but I want to just go rounds and enjoy my racing with my wife and kids. 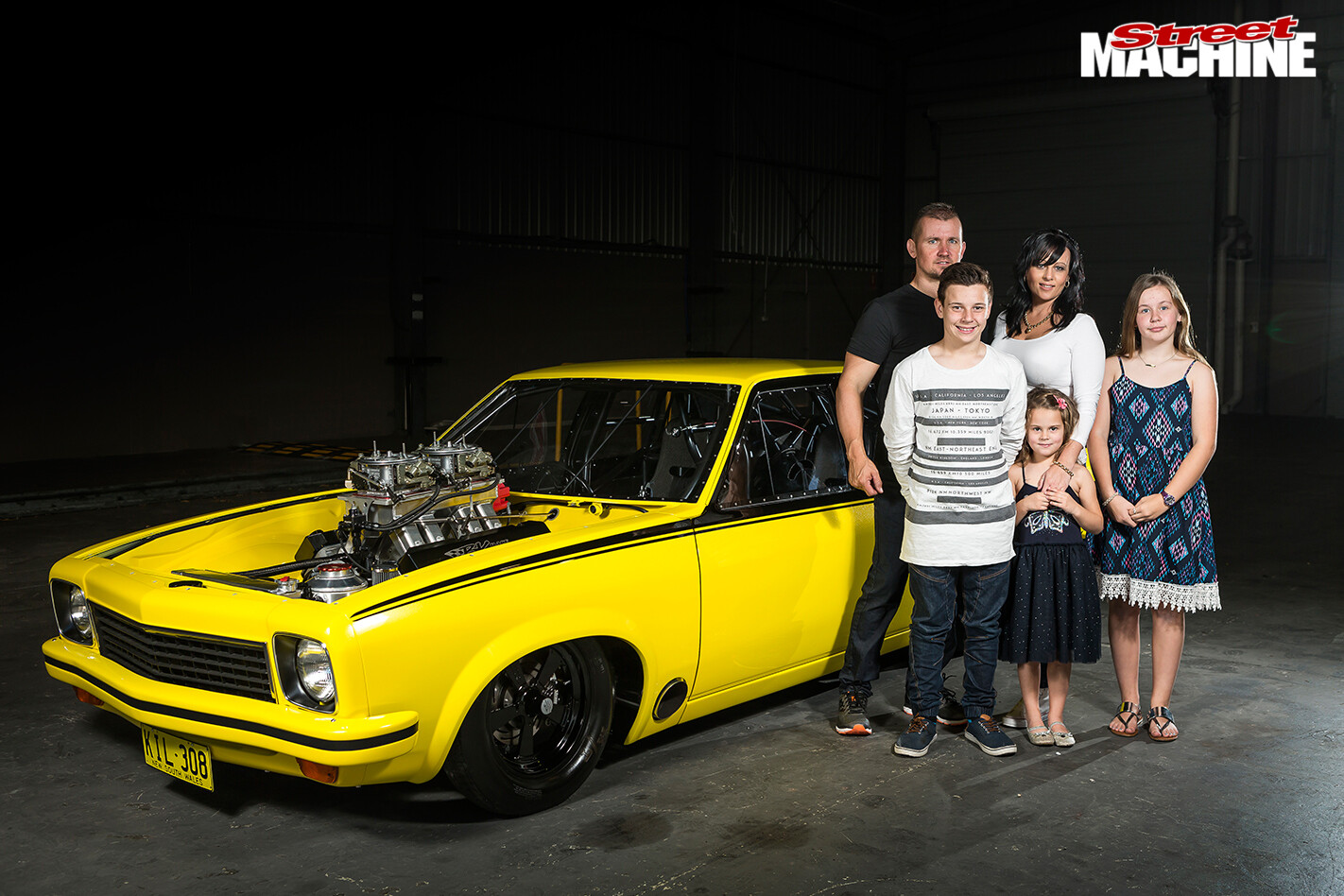 “It did 1.09 to the 60 straight up. Billy [from BK Engines] says to just hang on and have faith in the car. It skated for the first 60 feet each time, but after that it was all right. It still has a bit of power taken out, so it might go a 7.4 once it’s sorted. All I was chasing was a high seven, so I won’t expect anything else out of it.”

Towards the end of the build the bills were starting to pile up, but with a dozen hassle-free passes on its first outing and the car safely back on the trailer in one piece, David knew he’d invested wisely. “Everyone that worked on it is the best around at what they do, and it shows,” he says. “Considering the car went out and ran 7.57@178mph at its first meeting, I wouldn’t change a thing. Now I just want to race the shit out of it!”