THERE are plenty of different ways to go fast these days, but if you start with a big donk and a little car you’re way ahead of the curve.

When Bob Porobic first went in search of a new project, a Torana was at the top of his list for that very reason, but he eventually came to the conclusion that every man and his dog had a V8 Torry in the shed, and lusted after something a little less commonplace.

Enter a 253-powered Gemini complete with engineer’s papers. Smaller, lighter and more unique than a Torana, it seemed like just what Bob was after so he handed over the cash and dragged it home. 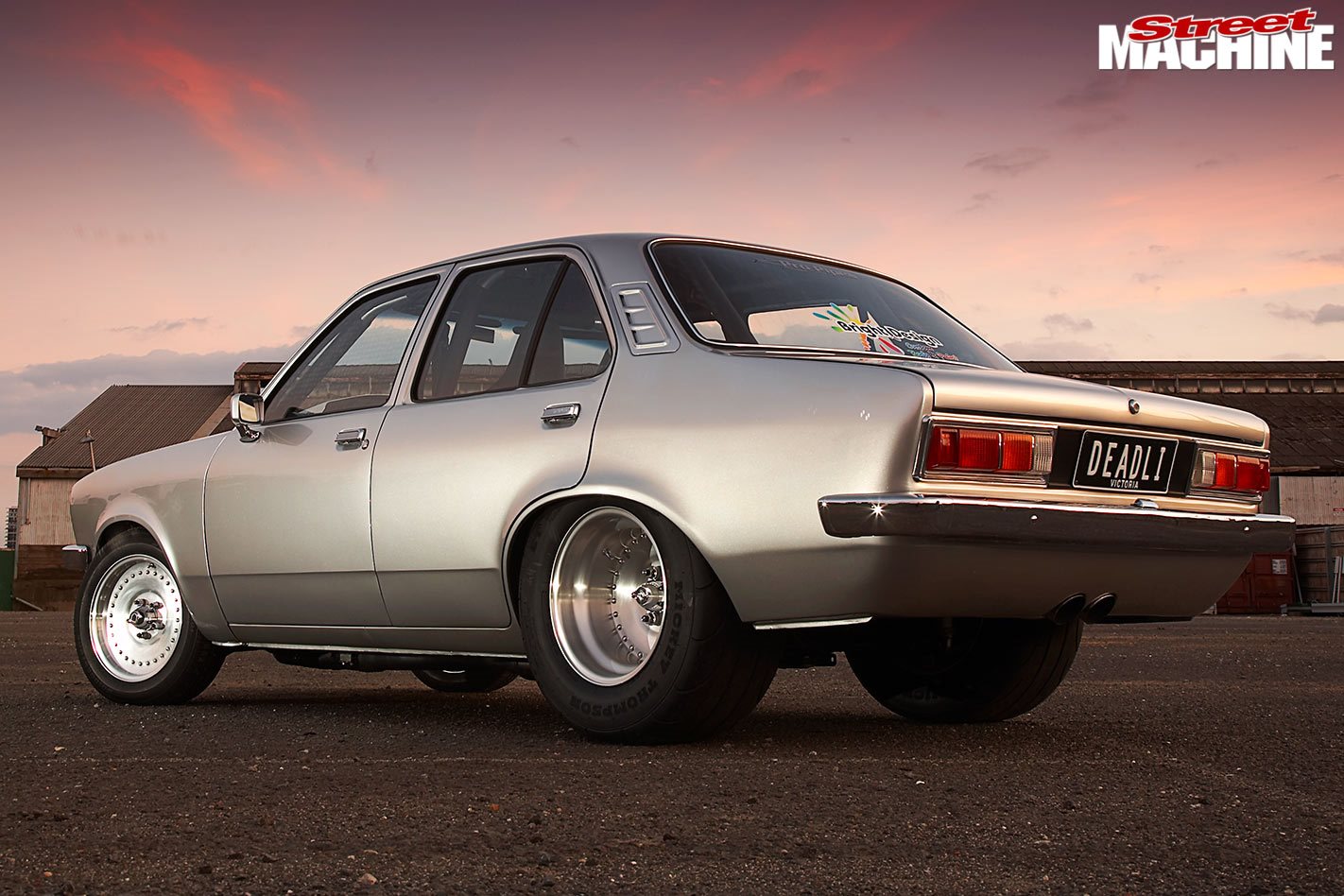 Bob’s a self-taught fettler, but going off the list of trophies said Gem would eventually accrue, he gives little if nothing away to most seasoned pros.

“Yeah, I’m pretty fussy,” he grins. “I like to try to keep busy, I’m not one of those blokes that can just sit around and do nothing on the weekends.”

Step one was to strip the shell bare and ship it off to Soda Workz Soda Blasting, and with the paint removed, what lay beneath was not a pretty sight, so Bob got busy with the repairs. Then on went the stunning custom silver duco along with sweet “realfire” flames by Bob’s better half Michelle at Bright Design. 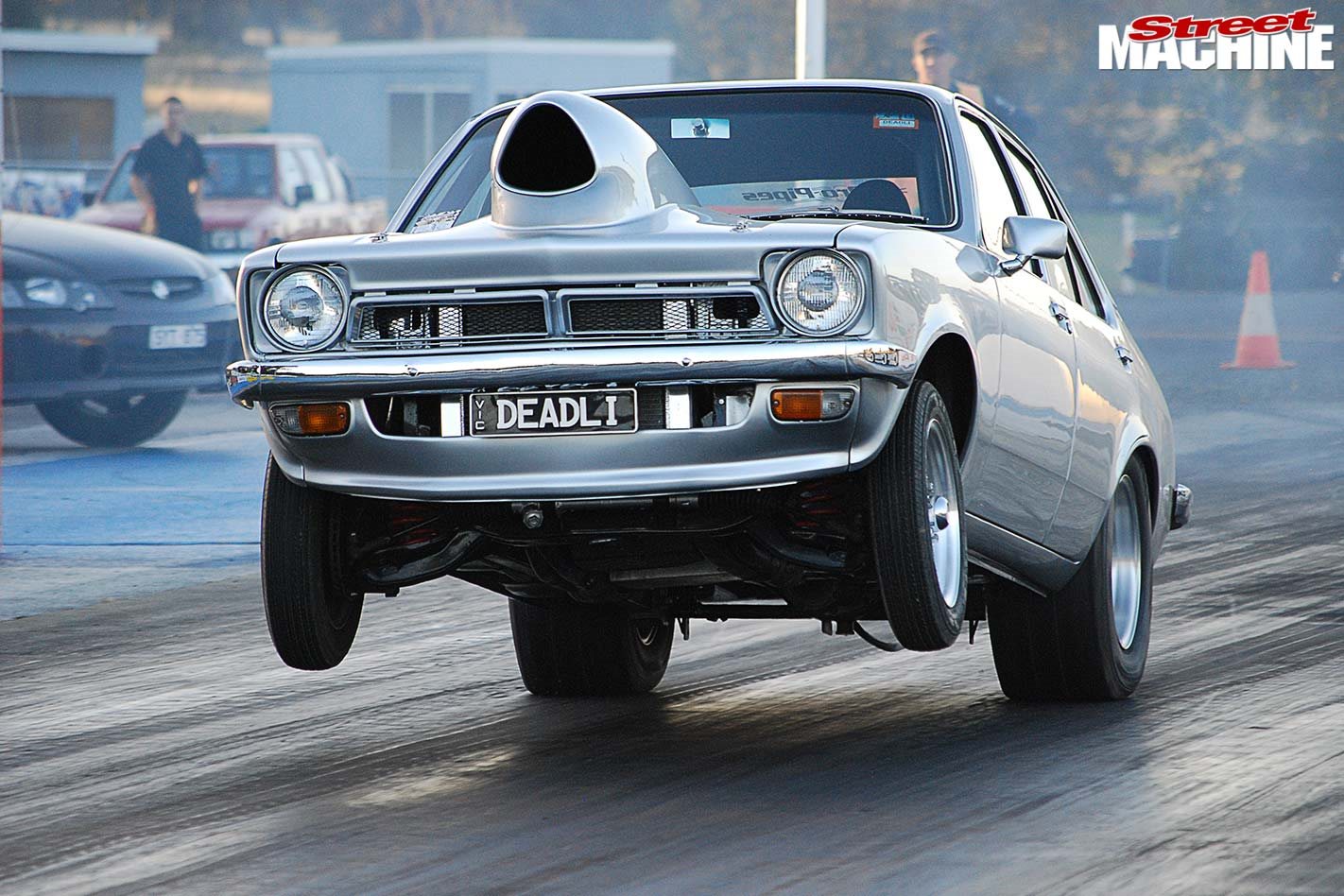 “She also airbrushed on the rusty screws running along the back of the firewall. Most people see them and ask when I’m going to fix it, and when I tell them that they’re airbrushed on they can’t believe it because they look so real!” said Bob.

The body was looking a million bucks, but that was only half the problem. The other half was that asthmatic old 253. Its replacement is a monster 383ci Holden with a mind-numbing 635hp on tap. 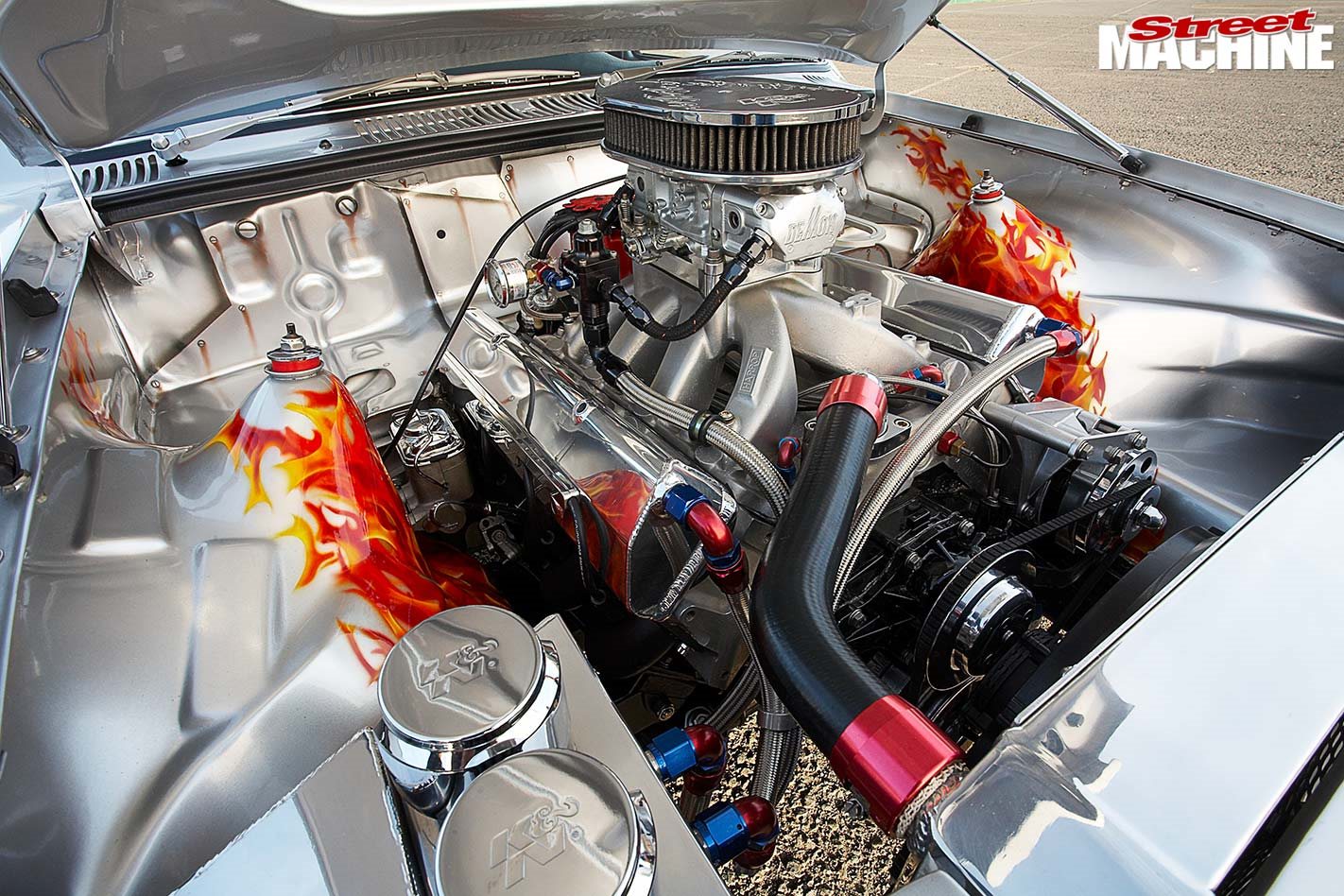 A billet Auscrank stroker shaft, H-Beam rods and CP forged pistons provide the extra cubes, while a set of tweaked Yella Terra Dash 9 heads, a custom roller cam, Harrop manifold and 1050 Barry Grant carb make the absolute most of them. A naturally aspirated 635hp is a hell of lot from a Holden V8, and Bob acknowledges it’s running on the ragged edge.

Out back, a set of tubs, a four-link rear end, Strange coil-overs and a pair of Center Line Autodrags in epic 295/50/15 Mickey Thompson Radials are all about going fast in a straight line, and it’s something the Gemini has proven quite astute at, pulling both front wheels well clear of the Calder Park blacktop and powering through for a best of 9.57@144mph.

Likewise the interior fits well with the car’s primary goal of getting from one end of the quarter to the other in as little time as possible. A six-point ’cage prevents the 635hp bent eight rattling the poor defenceless Gemini to pieces and looks after occupant safety in the process. RCI race buckets and harnesses do the same, while a full complement of Auto Meter Sport Comp gauges keep Bob well and truly in the loop. The highlight of the cockpit though is the VS Commodore dash in which said gauges are displayed. No matter which way you slice it, shoehorning a dashboard from a full-size family Commodore into a pint-sized Gemini is not without its challenges. 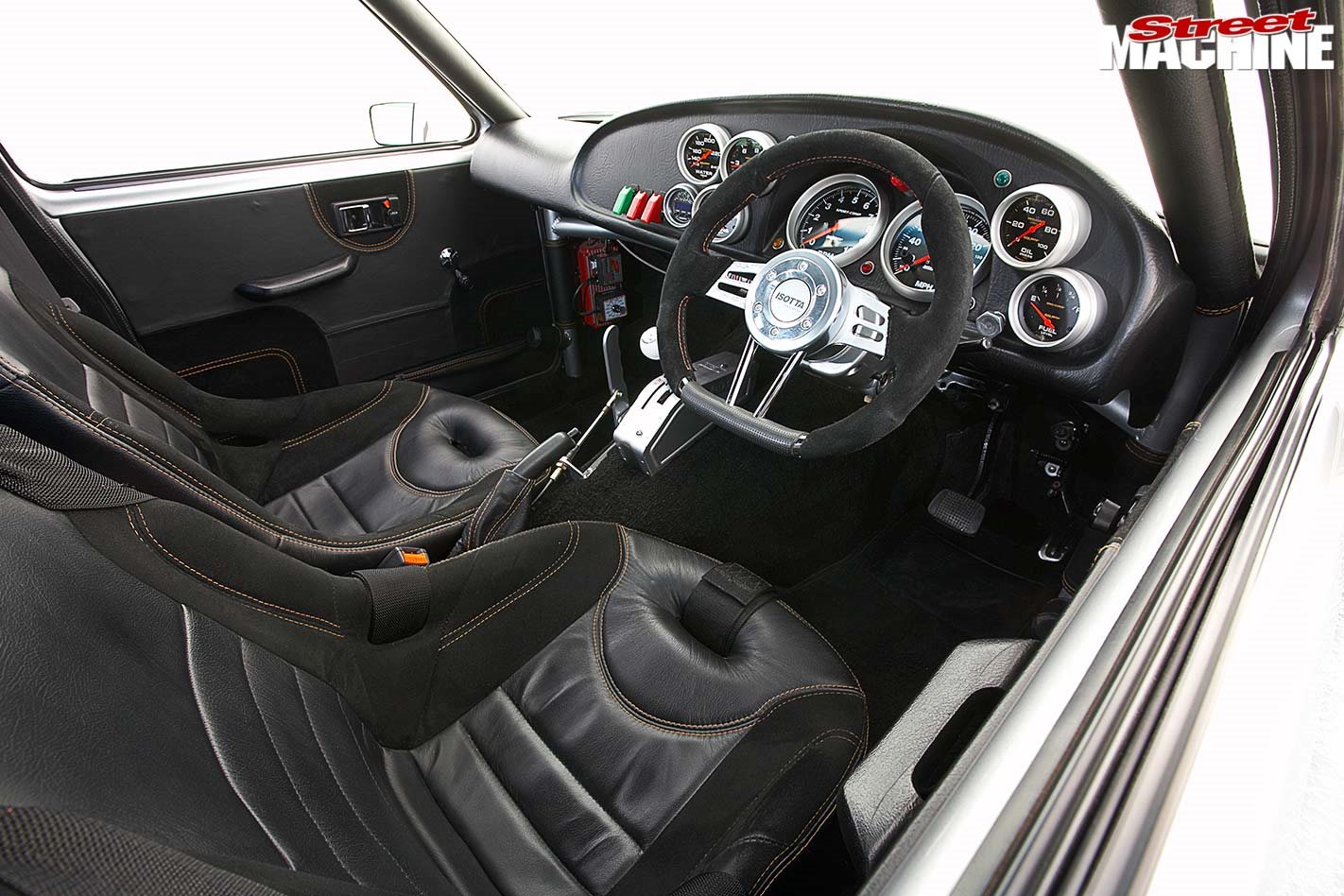 “To be honest, it was a nightmare,” Bob said. “I’m usually up for a big task, and the more people tell me it can’t be done, the keener I am to have a crack at it, but I wish that I never started that dash.

“It was too wide, too long and too hard! I reckon I would have had it in and out about a hundred times trying to make it fit around the rollcage.”
Race orientation and nine second timecards don’t mean that a car can’t be pretty, and this one’s collected a swag of trophies in both the show and go arenas, cracking the Top 60 at Street Machine Summernats 23, and picking up silverware for everything from top sedan, top engine bay and top interior to crowd favourite powerskid at events such as Springnats, Gazzanats and Powercruise.

“We’ve done really well with the car since it’s been finished,” said Bob. “We’ve been pretty much everywhere with it except for Brisbane, and we’ve got plans to get there in September for Powercruise.

“When you tell people you’ve got a Gemini they go, ‘Oh yeah, a Gemini’ and shrug it off. But then when they see the car and how fast it is and that it gets driven on the street all the time, they’re shocked.”

With its wild, wheels-up launches and solid nine-second timecards, it must be a pretty wild thing to drive on the street, right? 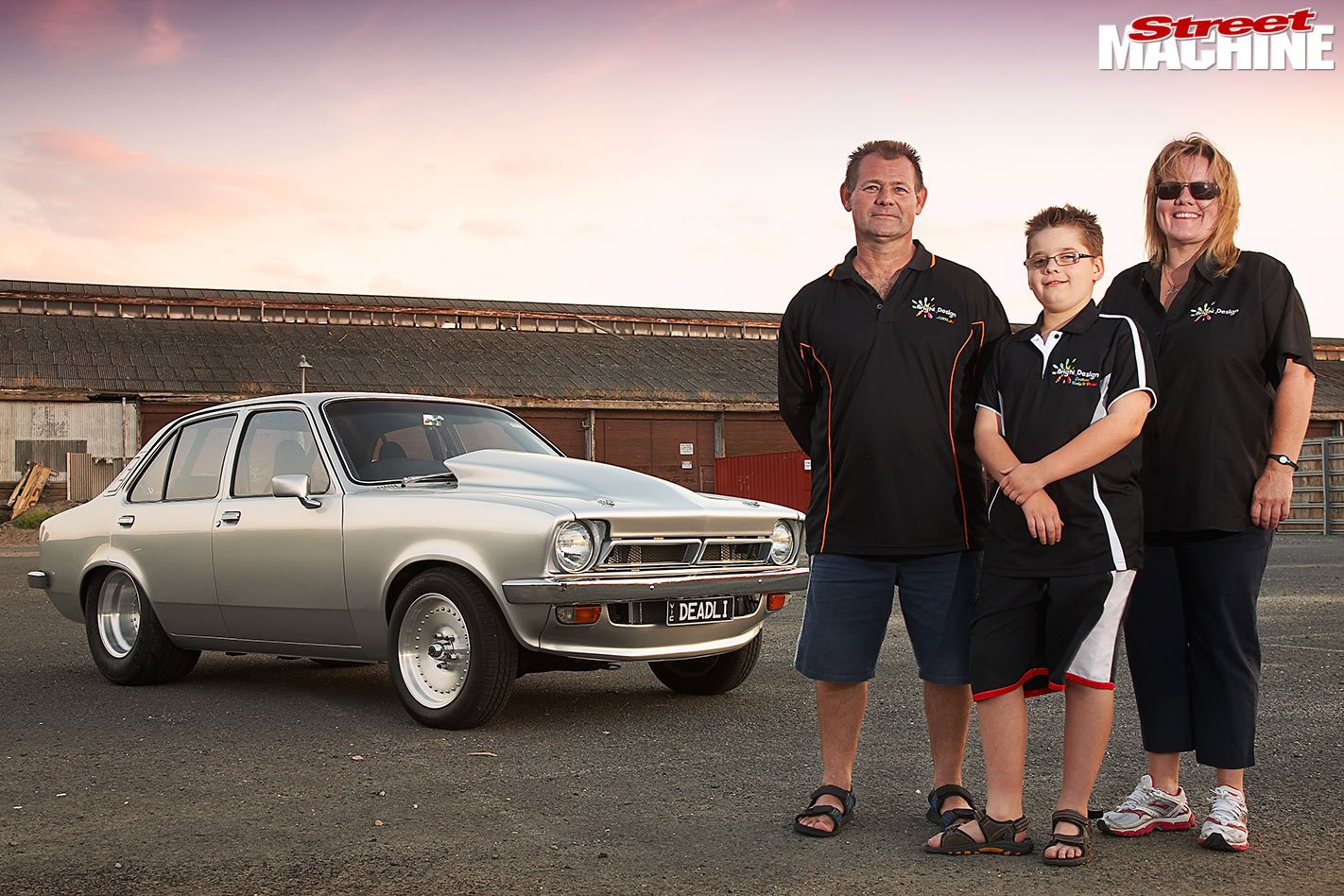 “Well, put it this way; I’ve spoken to people who have Hayabusas and R1s and this thing is faster than their bikes. I reckon that it’s probably one of the five fastest street registered cars in Victoria.

“And for a car that we often drive up and down Chapel Street at two or three in the morning, I’ve had three canaries and one EPA visit in 13 years so it’s not too bad.”

This is the part where we normally talk about future plans for the car, but sadly, it’s where things for DEADLI take a turn for the worse. Less than 24 hours after our shoot at Heathcote at Easter, Bob was mid-way through a tyre-torching Powerskid when the car turned at the wall and hit hard.

“It hit at the front then spun the rear around and hit the rear quarter, the beaver panel and the bootlid,” he said. “It’s on a rotisserie at the moment and it’s not in a good way. I can fix it, but it’ll take a while. We were always going to do a colour change anyway, but we’re wishing it wasn’t under these circumstances!”

THANKS
Danny Drewitt at SOC Upholstery, Craig Brewer at Pro Pipes and Race Cars, Nej Dalipi at Soda Workz Soda Blasting, Frank and Lou at Dandy Engines, Darren Reid at Street & Strip Performance Exhaust, Danco Knezevic at Addicted Performance, my wife Michelle and children Danny, Stacey and Zack, and son-in-law Jarrod for all their time and support over the years