After dancing around tracks in the drift scene, Braeden Kendrick now rooster-tails gravel with his Brock-a-like VK Commodore rally car

DRIFTING? Sure, there might be mad skills in hanging a car’s tail out at exactly 90 degrees and melting bitumen, but with no need to get to a finish line before the next bloke, surely it’s a bit like kids at school being given Certificates of Participation rather than First Prize? Not for Melbourne’s Braeden Kendrick. Having been busted too many times for street stunts, drifting seemed to him like a great way to have fun.

Formula Blue on a VK – legendary! It’s a standout anywhere – and one solid colour means it’s easy to repair

“I did all the dumb shit,” Braeden admits of his antics in his first car, a VH Commodore SL/E. “Until one day, I collected a semi-trailer. I did a fair bit of damage. So I decided to go to the track. I liked the look of drifting. Nissan Silvias and Skylines were the popular cars, so I ended up buying a Silvia.”

Braeden’s VK has a set of taller, tougher Pedders springs and Koni adjustable dampers. Since these pics were taken, the poly bushes have been replaced with standard rubber to better cope with the rough rallying conditions. Future plans include installing well-respected, rally-developed MCA dampers

Braeden’s Silvia was powered by a turbocharged Nissan SR20 DOHC four-cylinder. “I developed that vehicle over a period of about two years,” he says. “I put a lot of work into the suspension and did maybe 10 track days until the SR20 blew up.”

For now, the front brakes are twin-piston VT Commodore items (for a bigger pad), and the rears are Skyline, all run from a twin master cylinder system that allows the rear bias to be adjusted to flick the car into a corner. Braeden will be installing Japanese-spec Skyline four-potters up front soon. They’re bigger and offer a better variety of comp pads

Braeden then bought another ’caged-out Silvia shell, installed his old car’s suspension and shoved in an LS3 V8 crate motor that was intended for his crash-damaged Commodore.

But eventually, Braeden decided the drifting-past-gum-trees sport of rallying would be more fun. “With drifting, you drift five corners 1000 times,” he says. “In rallying you drift 1000 corners once!”

The search was on for a suitable car. “I wanted something rear-wheel drive, and I love the early Commodores,” Braeden says. “I learned with the drift Silvias that you spend a lot of money and time doing a ground-up build. I’d just started my business [Fast Track Towing & Transport], so I had limited time to dedicate to building a car.”

“They’re my favourite wheel,” says Braeden of the HDT Aero wheels that he rooster-tails with. “When the internet was first invented, I was a little kid and the first-ever video I downloaded was a bloke doing a burnout in an HDT VK with Aeros.” Most rally tyres are 15-inchers, so there’s tyre availability to consider, too

“I bought this one out of South Australia. It had some good-quality parts in it,” Braeden says of the VK Commodore you see here. It had been built with a later-model injected Holden V8, a six-speed Tremec T56 manual gearbox and a nine-inch diff. It also included the six-point rollcage with intrusion bars: “With drifting, you slide onto a sand trap. In rallying, you slide into a tree,” Braeden reasons.

Since buying it, Braeden has invested more than 18 months of spare time giving it a freshen-up. The Commodore was stripped and painted in that classic Formula Blue by Ben at InLine Collision. The car received a mechanical once-over, too: “The engine was already in the car with that manifold, but we went over the whole top end and valvetrain,” Braeden says. “It had a few bent valves. The extractors had holes in them, too, which caused a few issues, so we had to fix a few things before we tuned it.”

Braeden isn’t sure of the V8 bottom end’s provenance – the freshen-up revealed only that the pistons were stock and there was a roller cam – but Braeden has an ‘if it ain’t broke, don’t fix it,’ outlook. And it doesn’t seem broken! “They’re a pretty tough little motor,” Braeden says, before cheekily adding, “and they sound a heap better than an LS!”

The Holden 304-cuber allows the car to compete in the PRC (Production Rally Car) class. It develops around 200kW at the wheels on 98-octane juice thanks to a cam, COME intake, K-Motion dual valve springs and careful tuning of the Autronic management. And yes, Braeden is embarrassed his air cleaner was left at his workshop for the photoshoot!

One of the reasons for the engine’s tractability – Braeden spins it up to 6800rpm – is the free-breathing COME intake manifold. Holden’s intake manifold works great on-road to around 5500rpm, but this one benefits from the bigger lungs provided by COME’s shorter-runner, bigger-volume and double-bladed piece. The cooling fan is now a thermo; it lightens the load on the drive belt and reduces the risk of the fan holing the radiator in a mild front-end shunt. “A little tap onto a tree could push the fan into the radiator,” Braeden explains. “With thermos, there’s more chance you can keep going.”

A Tremec T56 six-speed lives behind the Iron Lion. Behind that, a one-piece tailshaft takes the torque to a Ford 9in with 4.11 gears. Buying the VK with this expensive driveline hardware already aboard saved Braeden big bucks and plenty of development time – two commodities he learned plenty about when building his two Silvia drift cars

Frank at Allsparks tuned the car (liberating 200kW at the treads), with Peter from PET Racing – a guru with Autronic ECUs – also in on the session. The result is a ripper on the dirt. “The five-litre, the six-speed and the nine-inch with the 4.1s – it all works really well as a combination,” Braeden says. “It drives really well out of the corners; if there’s a bit too much wheelspin you can pop third and the grip and torque gets you going.”

The Commodore’s standard under-car fuel tank is in the firing line for gravel damage, so it’s been replaced by a boot-mounted fuel cell. There’s twin Carter lift pumps and two Bosch 044s – one set switched-out as a spare – feeding the fuel rails

The suspension – arguably more critical in a rally car than in other comp cars – has also had a once-over and will be developed further as Braeden settles into the rhythm of rallying. “Some blokes run a lot of caster; they destroy front caster bushes. They come loose; they’re double lock-nutted – sometimes they’re replaced every event,” he says. “Rubber is better for the car as it doesn’t shake the car to bits; it needs a bit of give. If the bushes don’t give, what does? It’ll destroy the car.”

The monkey bars were in the car when Braeden bought it. The dash panel has been abbreviated to the minimum required and packed full of essentials, including a bespoke wiring harness with easily accessible relays and fuses for everything

So far, Braeden has completed one full rally. “It was about 130 kays of flat-out running through the bush near Heathcote,” he says. “That was called the Nissan Nightmoves – put on by the Nissan Car Cub Australia. I’ve also done the first Victorian round of the Australian Rallycross series at Winton. It’s a new series and is a mix of dirt and tarmac; you race door-to-door with five cars at once!”

Like elsewhere in the car, durability is paramount in the tough conditions of rallying. It’s noisy, too, so there’s a Terraphone intercom system

Braeden’s co-driver is Ari Paterson. “I met him through the rally community,” he says. “He broke down one night and I gave him a tow. Since then, he’s put his hand up [to navigate].

“It’s an awesome buzz,” he says of his chosen sport. “Flying through the bush at midnight, helmets on, fishtailing; then there’ll be a group of 30 or 40 spectators by the edge of the road in the middle of nowhere. Even when you’re on a transport [non-competitive] stage, you’re out in the bush driving through hills and valleys. It’s terrific.

“But you know what?” Braeden concludes with a chuckle. “It’s only a matter of time until we bin it!” 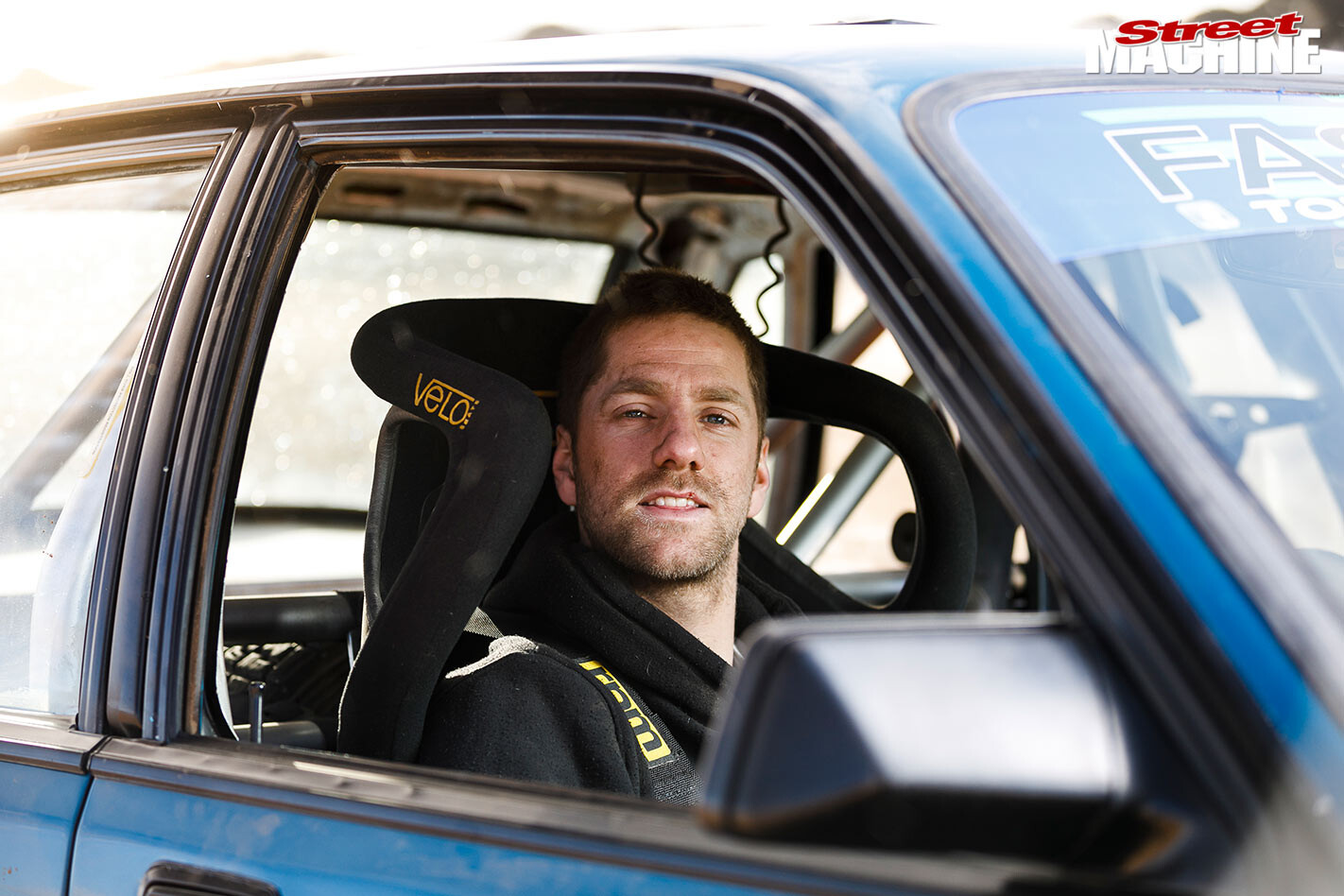