YOU need balls the size of small planets to swing the gas-axe into a 1000km-old HSV GTO Coupe. HSV’s ‘Monaro with the lot’ looks horn, goes hard, and handles and stops just fine. It’s the pinnacle of modern muscle, so to hack one to bits in a bid to improve it is a pretty ambitious undertaking. But Paul Halstead is an ambitious kind of bloke, the sort who wouldn’t let anything stand between him and his ultimate Monaro.

The side skirts are custom-made from steel, with carbon fibre inserts

So with a head full of ideas and some very detailed concept drawings, he fronted up at Waddington Street Rod and Restoration Centre in Castlemaine, Victoria.

“Paul approached us with the drawings and he told us that he was purchasing the car,” Kelvin Waddington explains. “He had told the artist exactly what he wanted, right down to little things like the size of the tyres and the extension on the bonnet. He designed the car himself; they were all his ideas and we stuck to them the whole way through. He didn’t want to get away from that Commodore look but he still wanted his own design.” 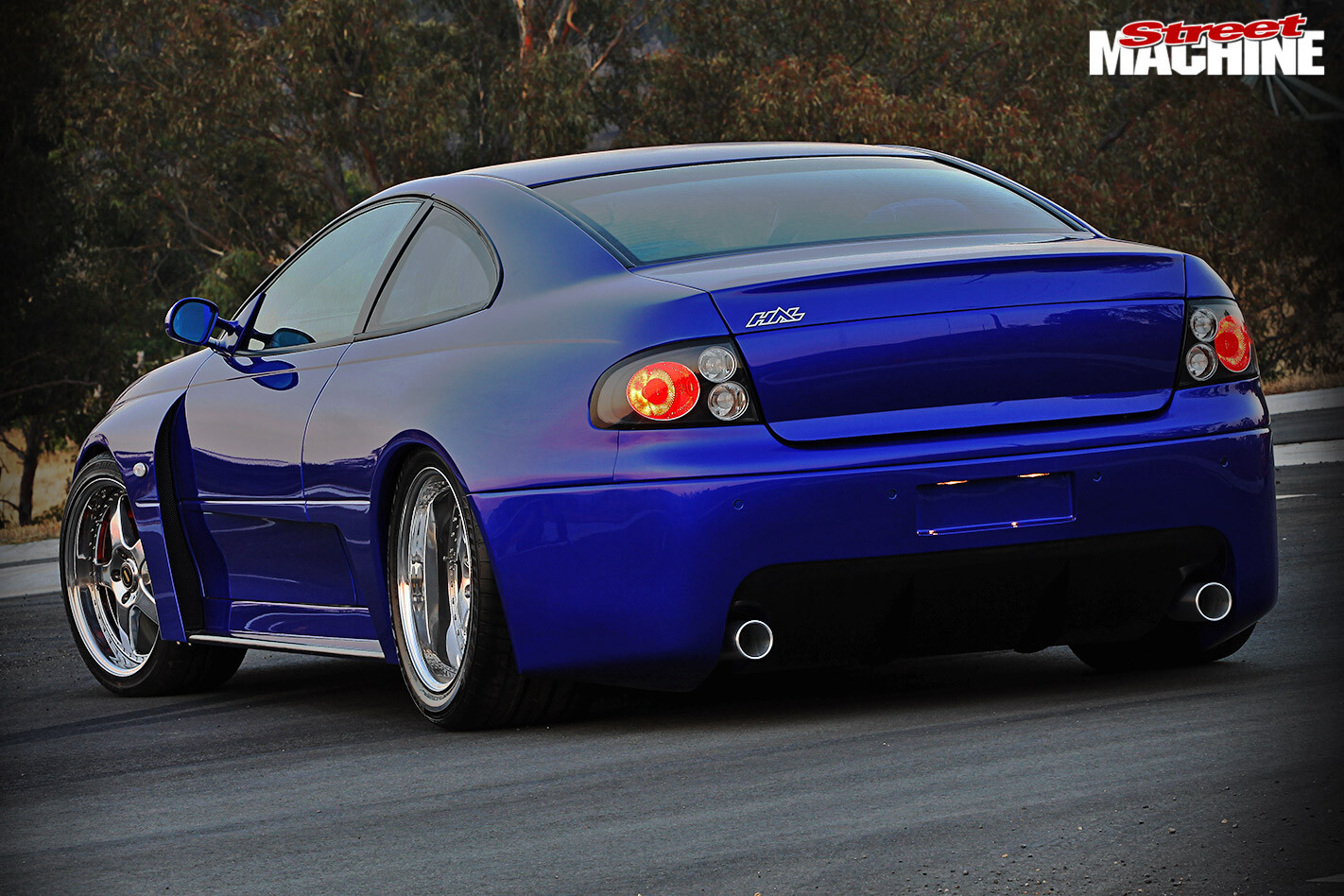 Deck spoiler was deleted, while custom boot garnish hand-made in steel continues the profile of the tail-lights across the boot. The rear bar is a one-off custom item with carbon fibre diffusers and frenched numberplate. Park-assist carried over from the factory bar

Waddington invested a hefty 1100 work-hours in the body to achieve the desired shape. That might seem excessive but it only takes a glance at the build photos to understand where all that time went. Every single panel on the car has been subjected to painstaking customisation, with much of the work done the traditional way — in good old-fashioned steel.

The roof chop is one of the most brilliantly executed body mods, where some innovative thinking side-stepped what’s normally the most expensive part of the job: custom glass.

An original turret skin and rear windscreen were used, with the rear glass laid over, shifting the turret slightly forward. This was countered up front by slicing 20mm off the top of the laminated windscreen. Side windows are also OEM, with the door and rear quarter glass just countersunk lower into their respective panels. It’s a great way to save coin on a roof chop without sacrificing that sought-after chop top look, and because all the stock glass still bears the ADR stamp of approval, legalities are a walk in the park too.

The bonnet is more subtle. It looks standard at first glance but a double-take tells a different story. The bonnet skin was unpicked from the frame and split in two. The frame was then extended 30mm and trial-fitted before the skin was extended to match, now drooping down over the grille and headlights in a manner not unlike an XM Falcon. While the skin was off the frame, new nostrils were hand-made in steel, filed up and TIG-welded in, before the frame and the skin were put back together and fitted to the car. Subtle yet effective.

In standard trim, the LS7 cranks out 505 wild ponies. Wait ’til the blower goes on! Neat alloy tank is for the dry sump

The rear quarters have also been radically modified, built around 345/35/19 tyres on massive 13in-wide Simmons FR19 wheels. The guards were widened by a little more than 100mm each side. As well as the outer sheet-metal, the inner arches had to be fabricated to accommodate the whopping great hoops and achieve the aggressive stance. The side scallops in the rear quarters feature functional rear brake ducts, allowing the big AP Racing anchors to keep their cool whenever the car is driven in anger. Despite the radically widened track, the factory Monaro rear suspension configuration remains, and does a great job aided by Öhlins gas shocks — trick!

Likewise, the factory HSV 3.9:1 rear end is still in place, as is a T56 six-speed manual ’box, though that’s now mated to an HSV W427 clutch. Quite appropriate really, when you consider that it’s sandwiched against a 427ci V8. More specifically, a dry-sumped LS7 Corvette crate donk. The beauty of the LS engines is that they’re more or less interchangeable, so once the GTO’s 346ci alloy small-block had vacated the engine bay and a mega-dollar custom billet dry sump had been fabricated, the monster 427 was a cinch to fit.

“There’s not a lot of difference in geometry with the physical size of the engine, and the rest of the drivetrain is factory bolt-in stuff, which made the job so much easier,” Kelvin says.

The leading edges were extended 30mm over the front indicators to match the revised bonnet profile, while the guards copped a massive pump. The front bar is a completely custom piece, which was redesigned from scratch when the original design didn’t work in the flesh

LS V8s aren’t the most presentable of motors but the lads have taken steps to make the engine bay a whole lot easier on the eye, such as relocating the coil packs from the top of the donk to down on the rails. Paul then sourced those wicked carbon fibre rocker covers. As well as adding an exotic touch, they tie the carbon fibre treatment on the outside of the car into the engine bay. That nicely crafted alloy reservoir on the passenger side of the bay is for the dry sump; the alloy radiator is from PWR. The Di Filippo extractors sport huge 17/8in primaries, chosen by Paul because there’s a sniff of boost on the cards.

The roof is chopped 55mm using a modified Holden turret

“I’ve got my eye on a billet under-bonnet blower,” he says with a grin, adding that those bonnet nostrils aren’t just for decoration, but for channelling cold air into the pump, once it’s fitted.

The cabin features mostly standard equipment but the seats, door trim inserts and headlining were retrimmed in blue suede. The most significant mod is the two-inch reduction in headroom but the car retains all the factory niceties because it’s been built for regular road use.

The guards were widened more than 100mm each side, with side scallops and functional rear brake ducts, and custom tubs

“Paul drives it; the whole concept was built in a way that it could be driven daily,” Kelvin says. “Sometimes we’ll start building a car and then the customer will get fresh ideas and we’ll change it along the way. Before you know it, you’ve gone from an apple to a pear. That wasn’t the case with this car — it’s exactly what Paul wanted from the start.”

HSV-style nostrils were hand-finished in steel. Unlike stock ones, these are functional. The leading edge of the bonnet extends 30mm, over the grille and headlights

That strict adherence to the game-plan really shows in the finished product. A clear concept, well-laid plans and the right people have come together to create what is undoubtedly a masterpiece of modern art.

Radically profiled doors were fabbed from one piece of sheet-metal

PAUL Halstead is a larger-than-life enthusiast who doesn’t do things by halves and loves muscle cars. If the name rings a bell, you probably remember the Giocattolo, the supercar he produced in the late 80s. That car may be history but his passion for building fast, exciting machines remains, as evidenced with this car.

What was your aim with the build?

I really liked the Monaro, so I thought: “Why not start with a modern car and do what I want to do?” I was mindful that I was setting out to modify a car I thought was beautiful. When you mess with someone’s design, you want to be really careful. We didn’t try and shape it differently; my objective was to design the car Holden would if it didn’t have to cater for everyone.

Kelvin says the finished product is 99 per cent as you envisaged it.

If I showed you the drawings, it’s almost exactly what they delivered. We changed the front because I tried to make it like a Group A car and it didn’t work. Beauty in a car is not for one out of 10 people. The roof, sides and rear looked great but the front didn’t so we redesigned it.

How do you plan to use the car?

I drive it. With the Öhlins suspension that Walkinshaw Performance did on it, it’s beautiful to drive. With the 427 and the exhaust it’s quiet but menacing. At 80km/h you can jump on the throttle and it’ll light the tyres up, which is pretty exciting.

You’ve got a new supercar in the works, we hear.

I can’t really say too much at this stage. We are building a complete lunatic car, really over the top. I’m doing it because one day they dig a big hole and throw you in it, and until then, life for me is about building the best cars you can. It’ll be two years away, because one thing I really hate is when people make all these promises, like ‘I can build a car that’s better than a McLaren F1 road car’ and never deliver. But I intend to build a car that’s pretty special. It’s a one-off, and when it’s finished, if a manufacturer wants to join me in a partnership then we’ll have a go. And if it fails, then it will be my toy, I’ll drive it and I’ll enjoy it. What it won’t do is send me broke again because I’m 63 and I don’t want to start again — it’s too hard.