With 2400rwhp on board, Rob Salvador's aim was to have the quickest LS-powered car in Australia

ROB Salvador’s House of Power business has been building and tuning LS-based weapons for the better part of nine years. Rob's been constantly developing and honing his craft to the point where he is now aiming to have the quickest LS-powered car in the country. 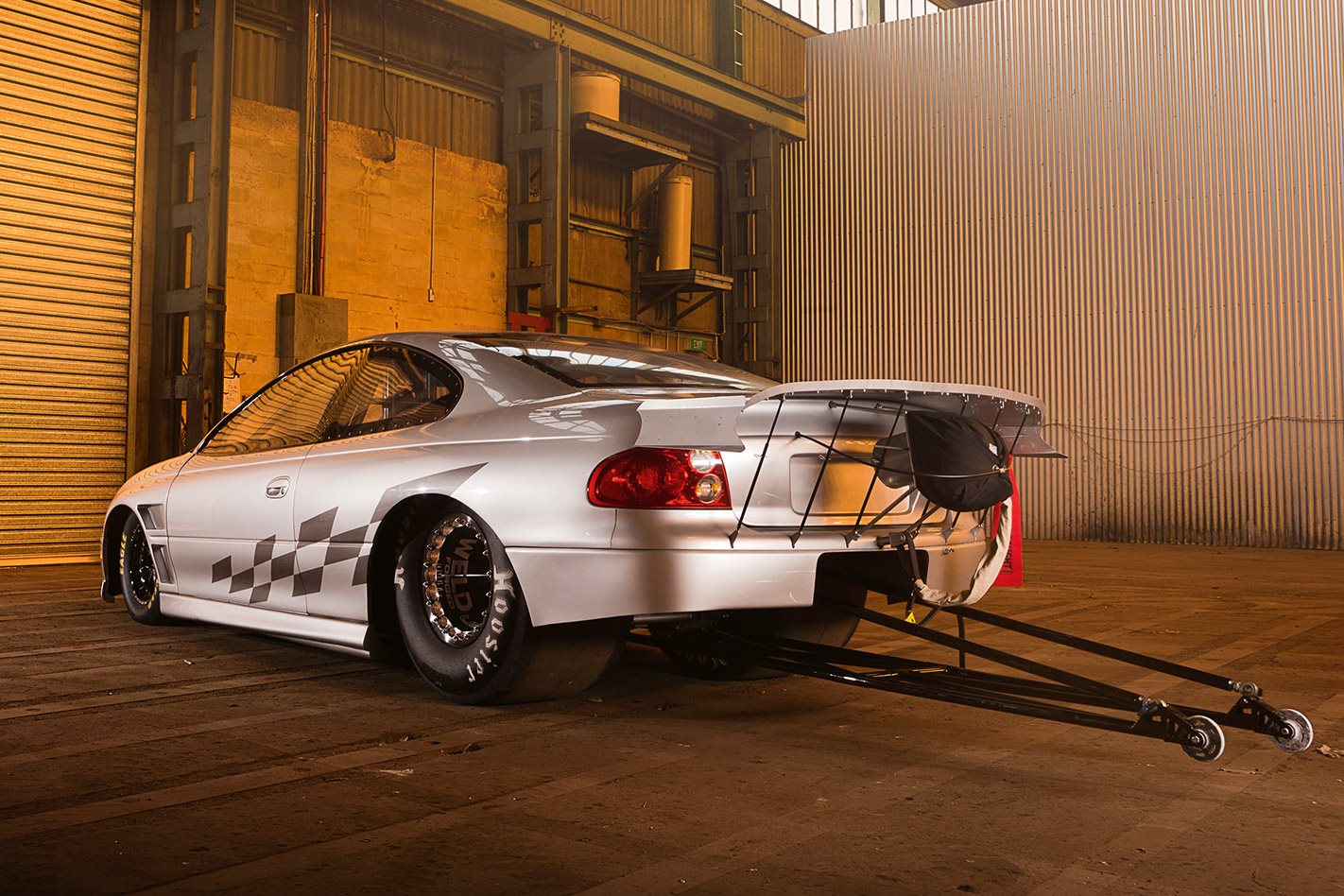 The GTO left the Holden factory in Phantom Black, but a hailstorm and then a resurrection by Hutter Performance in the US turned it into a stunning race car

His previous race car was a Commodore ute that ran low nines on a heavy dose of nitrous. That car has since been sold, although it’s still in the workshop getting a ProCharger fitted for its new owner. Rob wanted to step it up a notch or six, so he went looking for a purpose-built drag racer. 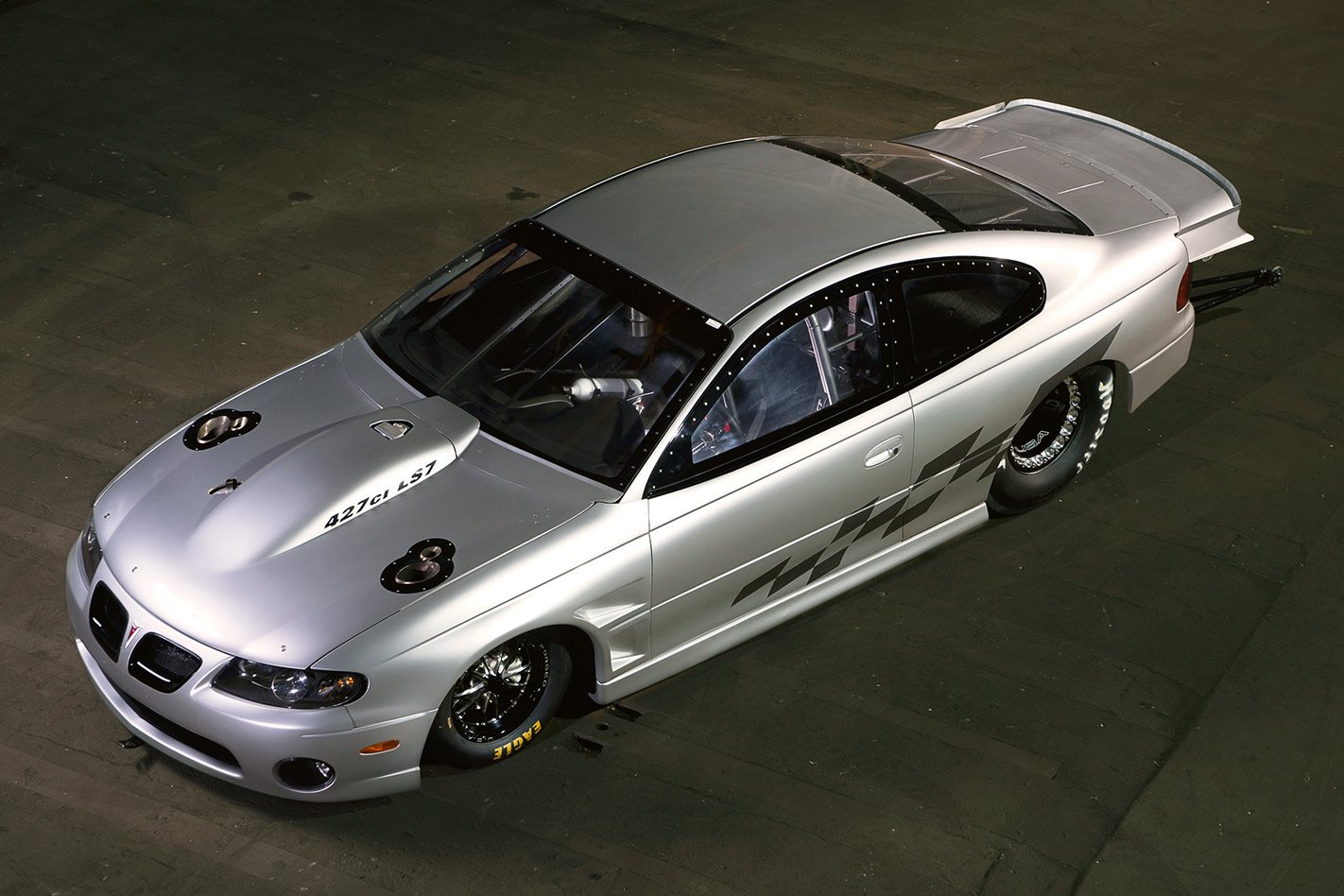 The roof and quarter-panels remain steel, but every other panel has been replaced with lightweight Kevlar. Sadly, those awesome top-exit exhausts had to be changed to keep the rule-makers happy

He couldn’t find anything locally that suited his requirements, and the prices he was quoted for building a car didn’t make things any easier. “They wanted drug money just for a rolling chassis,” Rob says. He also felt the technology being offered wasn’t up to speed with the best from the USA, in particular chassis built by Jerry Bickel in Missouri.

“I also wanted something people could relate to and someone told me about a Pontiac GTO that was ready to go. It was built by Matt Hutter from Hutter Performance. They used to build and race NASCARs but decided to go drag racing. His dad, Ron, is 71 years old and has a wealth of knowledge,” Rob says. 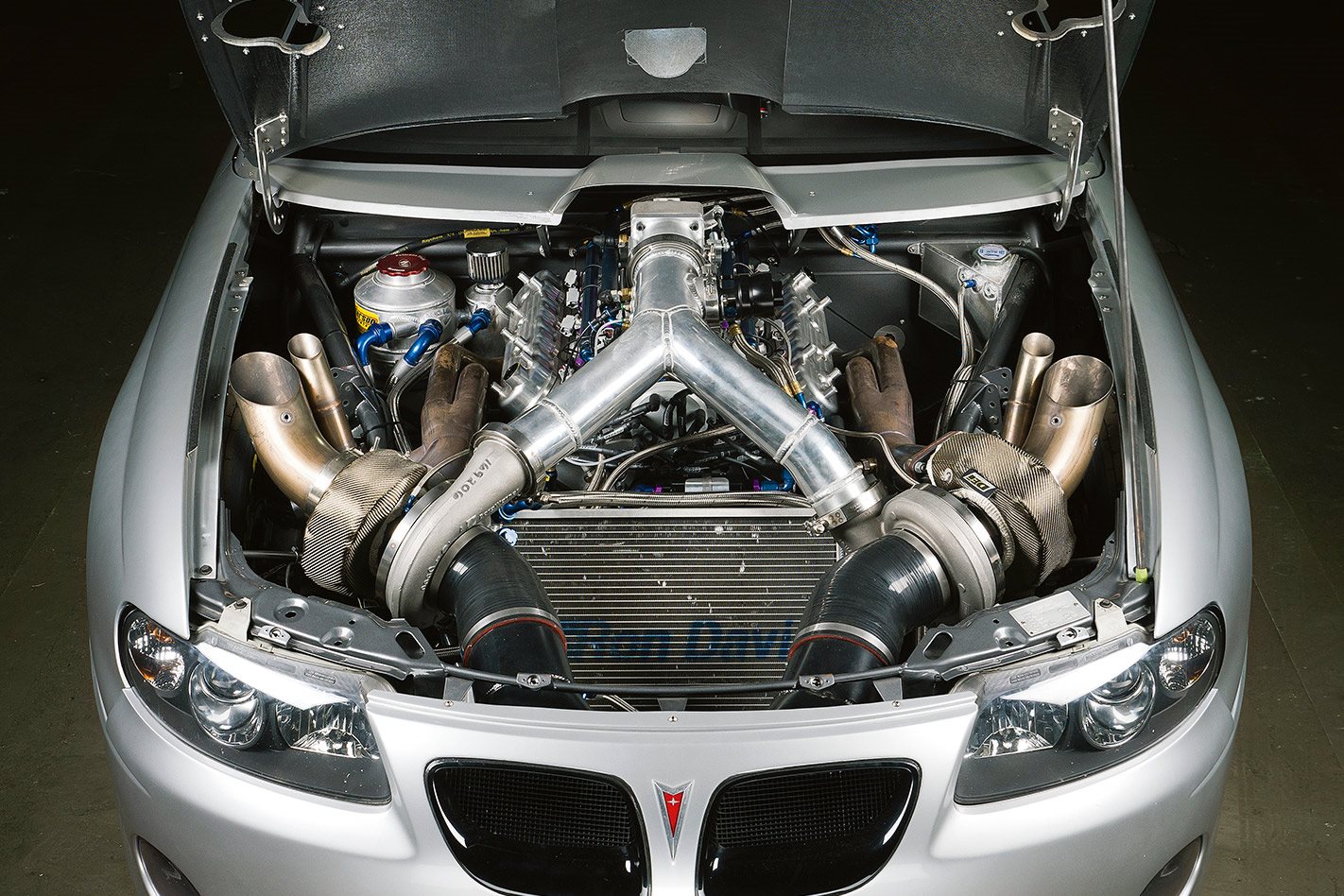 It’s amazing that such a little motor can make 2400hp at the wheels! Running the car on methanol means no intercooler is required and simplifies the plumbing substantially. Ducts running from the grille openings ensure plenty of cool air gets to the turbos

When Hutter was racing it, the car was fitted with a naturally aspirated 427 that made 1050hp. The car was good for 7.80@170mph – impressive enough, but that’s just where Rob is starting off with his own engine!

“I’ve already run 7.49@152mph; the car was doing 170mph at half-track but we were just testing and doing licensing passes.” Going on those indicators, the maths says the car could get into the 6.30s, but Rob’s a bit more realistic: “I think the car has the potential to go 6.50 and that’s what we’re aiming for.” 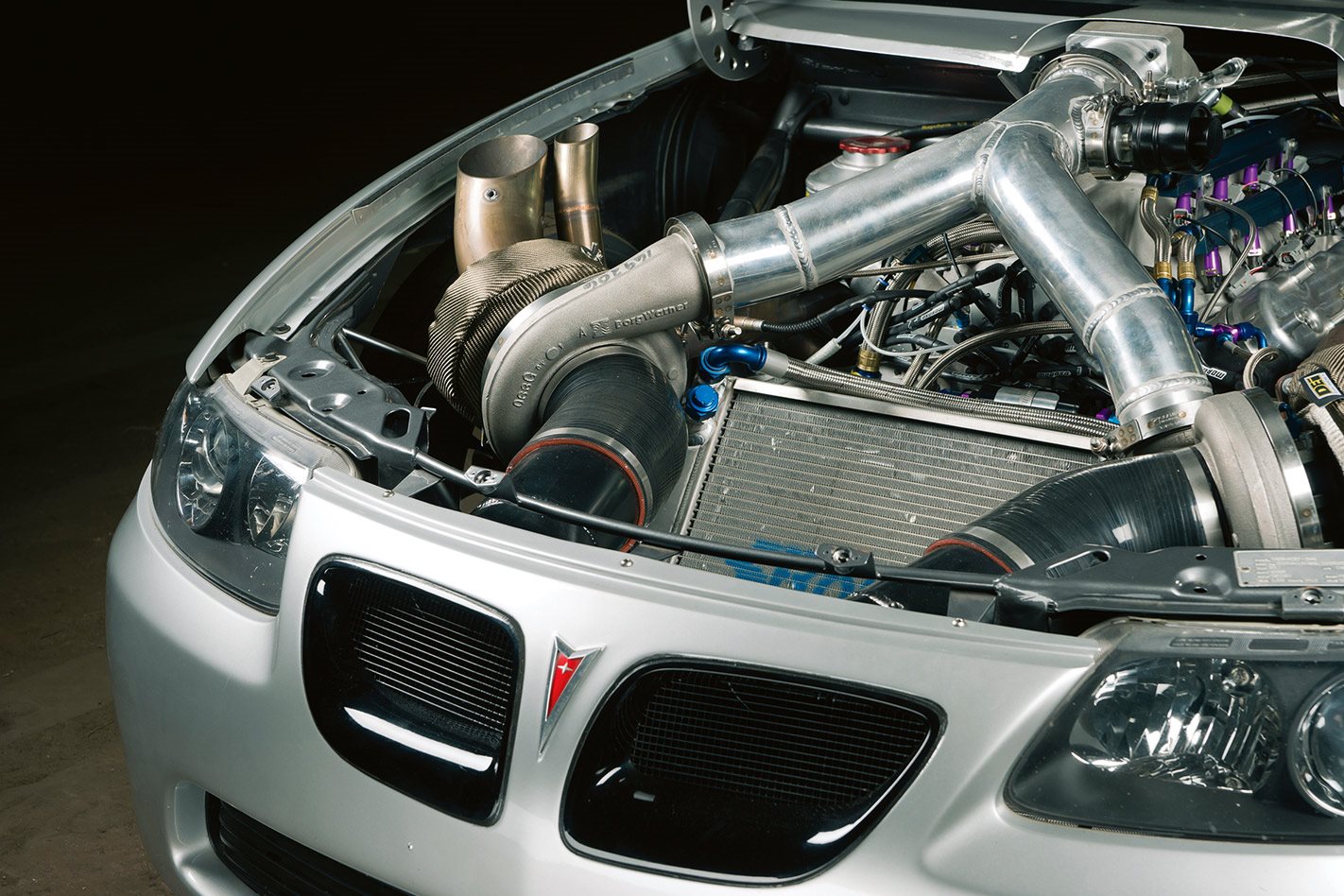 Running those numbers takes some serious mumbo, and that’s not a problem with somewhere in the vicinity of 2400hp available at the rear wheels. Those astronomical numbers are often thrown around these days, but they’re usually from much larger displacement engines. Getting it out of a small-block – albeit a fairly large small-block – is an impressive feat.

Rob started the build with a cast-iron 427ci LSX block that has been filled with quality gear. The Bryant crank, Oliver rods and Diamond pistons are all forged. There is a Comp Cams large-journal solid-roller cam fitted with somewhere around 770thou lift, and a set of beefy half-inch pushrods from Manton to ensure flex is minimised. 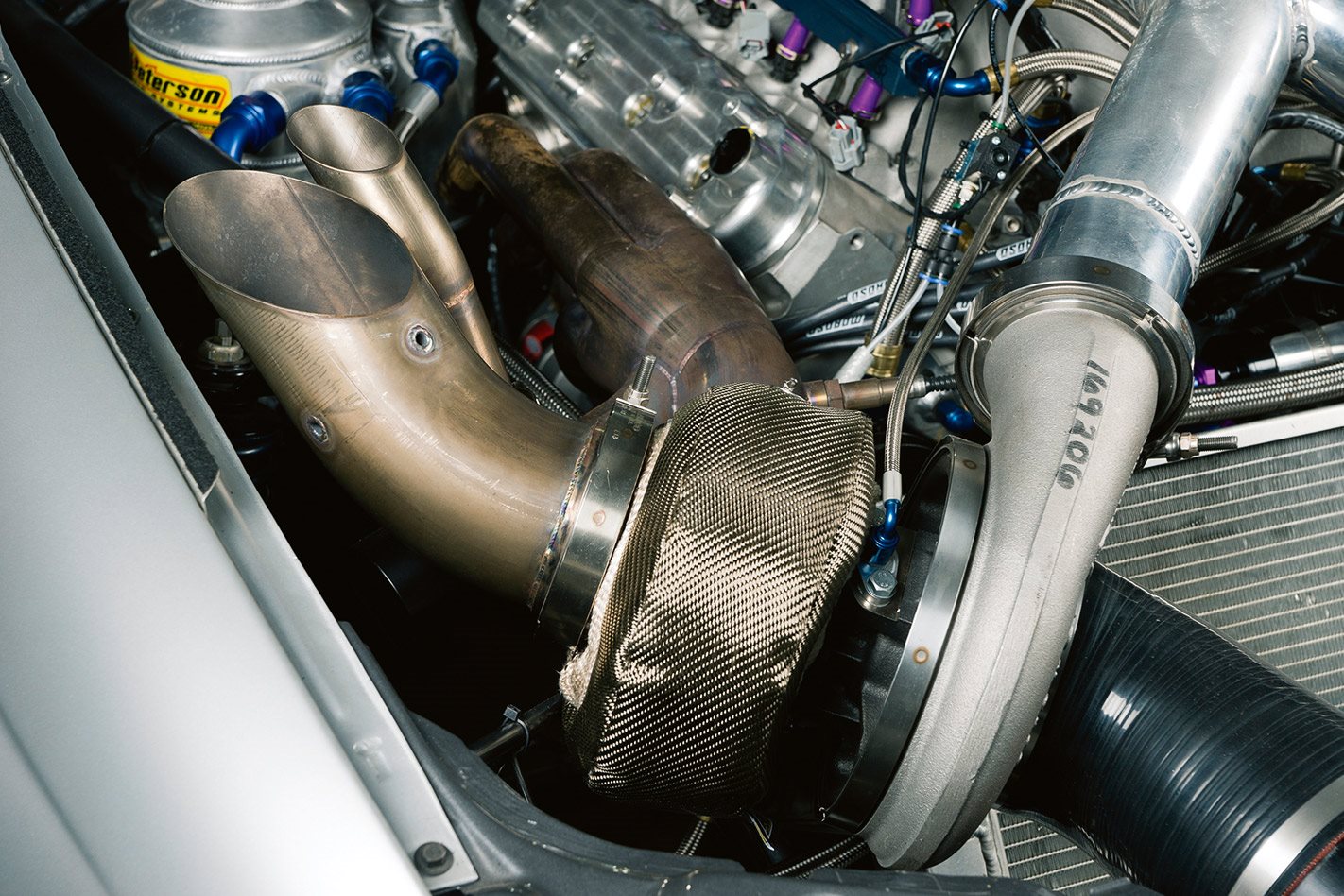 The turbos aren’t all that big compared to what some people are running, but the benefit is the boost comes on earlier. No bumping it into stage on the transbrake for this car

The Trickflow 235cc heads have been CNC-ported by Baker Engineering in Michigan and fitted with titanium intake valves and Inconel exhaust valves to handle the extreme temperatures that come with thousands of horsepower. Up top there’s no fancy-looking billet intake or high-tech wizardry, just a Wilson Manifolds 105mm throttlebody feeding through a 90-degree elbow into an Edelbrock single-plane intake. 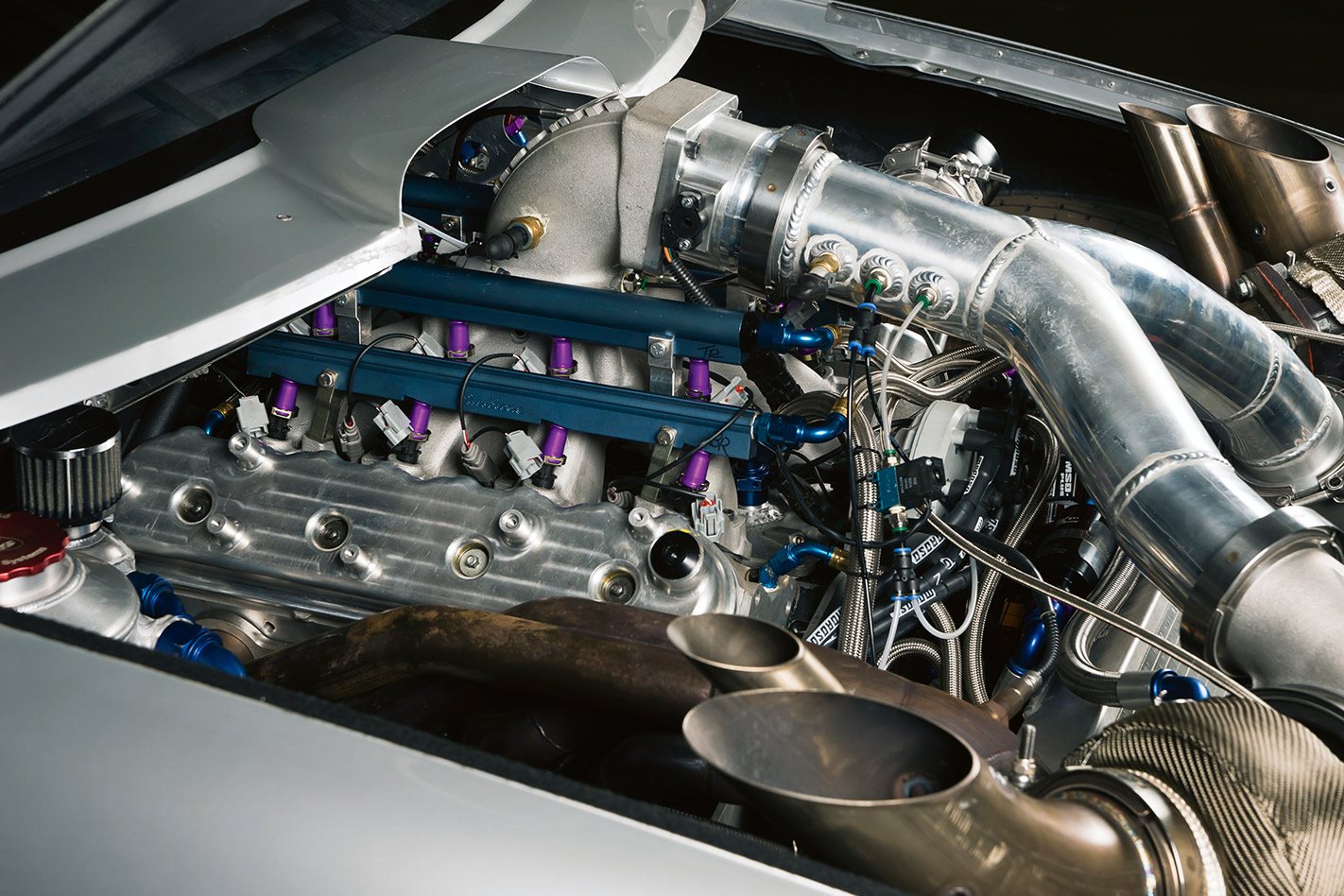 Rob takes the KISS approach to his engines, and clearly it’s working. Check out the shot of the engine bay, it’s about as simple as it gets when it comes to turbocharger plumbing; the air comes in from the front, the turbos get spun up by the exhaust gases, the boosted charge gets shoved into the manifold. Running the car on methanol means no intercooler and about 16ft less tubing, along with significant weight savings. 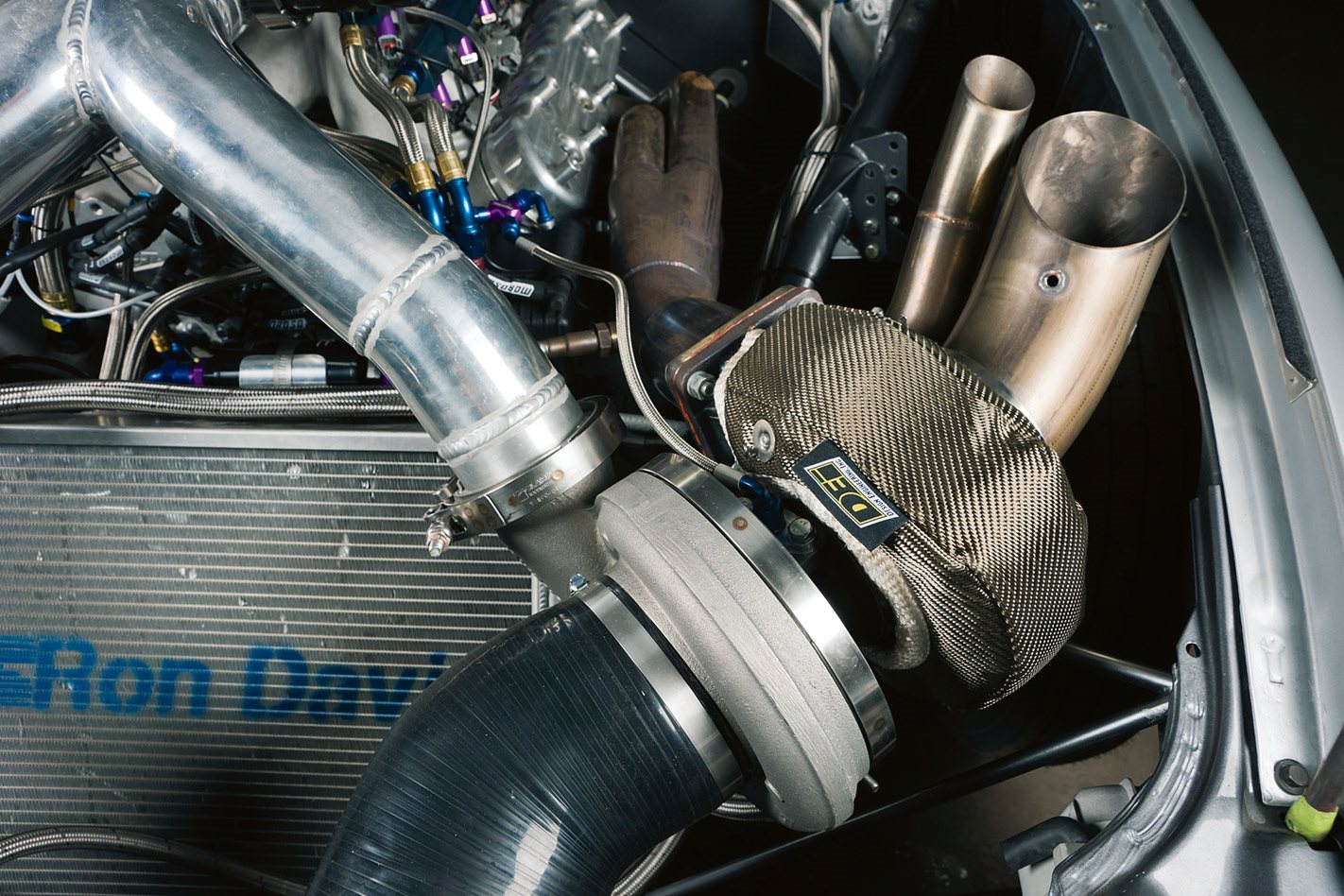 Where the real magic happens is with the set-up of the turbos, and not surprisingly Rob doesn’t want to give too much away. Basically, they’re not that big, which allows them to build boost very quickly. “It’s almost instantaneous,” he says. “I don’t have to bump the car in on the transbrake once I’ve built boost, I just stage like normal.”

What may be surprising to some is that the car is fitted with a three-speed, not the standard two-speed Powerglide that most drag racers prefer. “It’s a Rossler transmission based on a Turbo 400. I went with the three-speed because it works better with the turbo engine.” 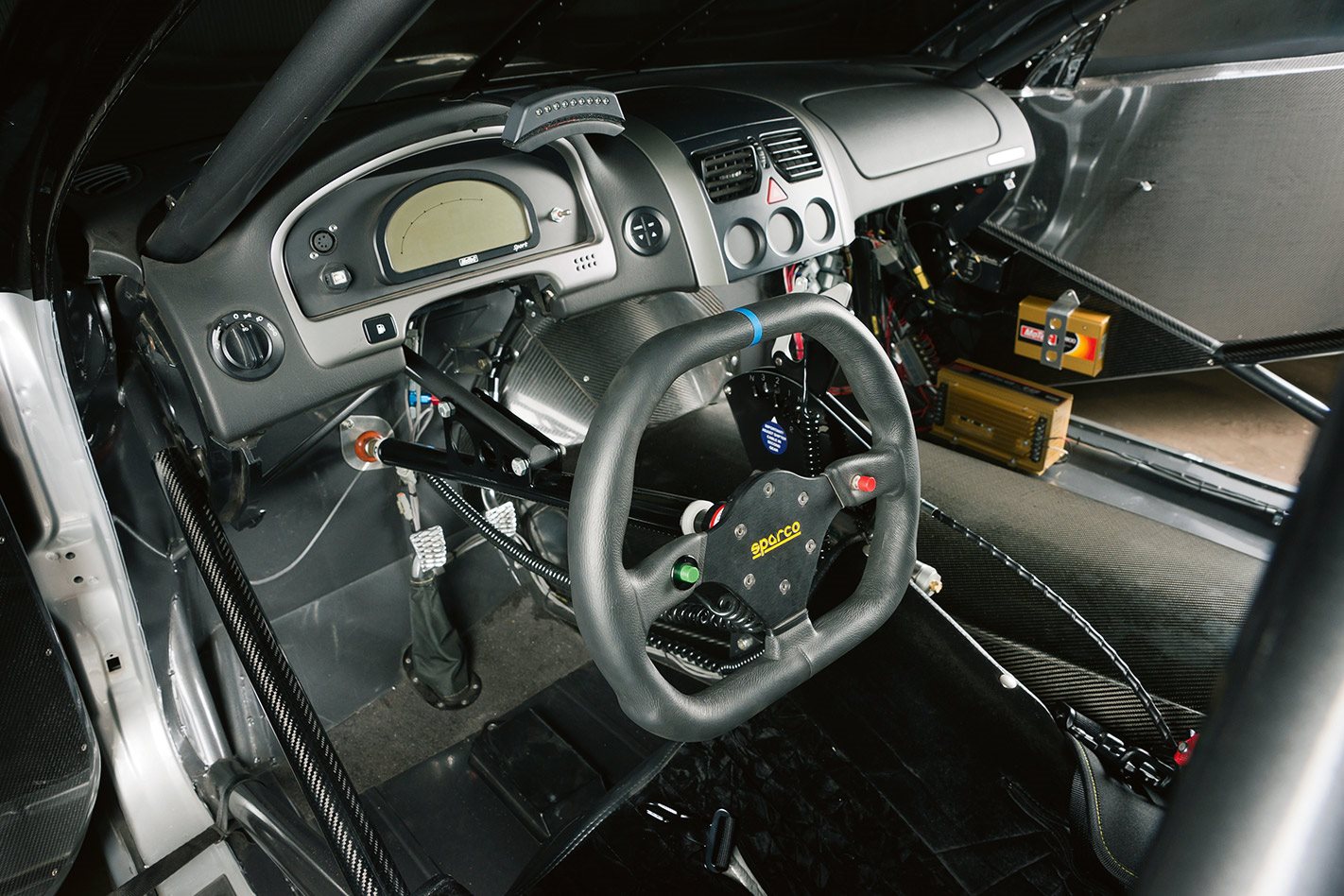 The standard dash is still there, although a MoTeC dash replaces the factory gauges and we’re pretty sure the a/c doesn’t work any more. The MoTeC system not only runs the show but also logs crucial engine data, an important part of any motorsport these days

The interior is unchanged from how it was raced in the US, but Rob will be making a few changes for ergonomic reasons. The rest of the painted metal and carbonfibre surrounds are as good as it gets, and with a chassis and rollcage built to Pro Mod specs, it’s more than capable of handling any amount of power Rob can throw at it. 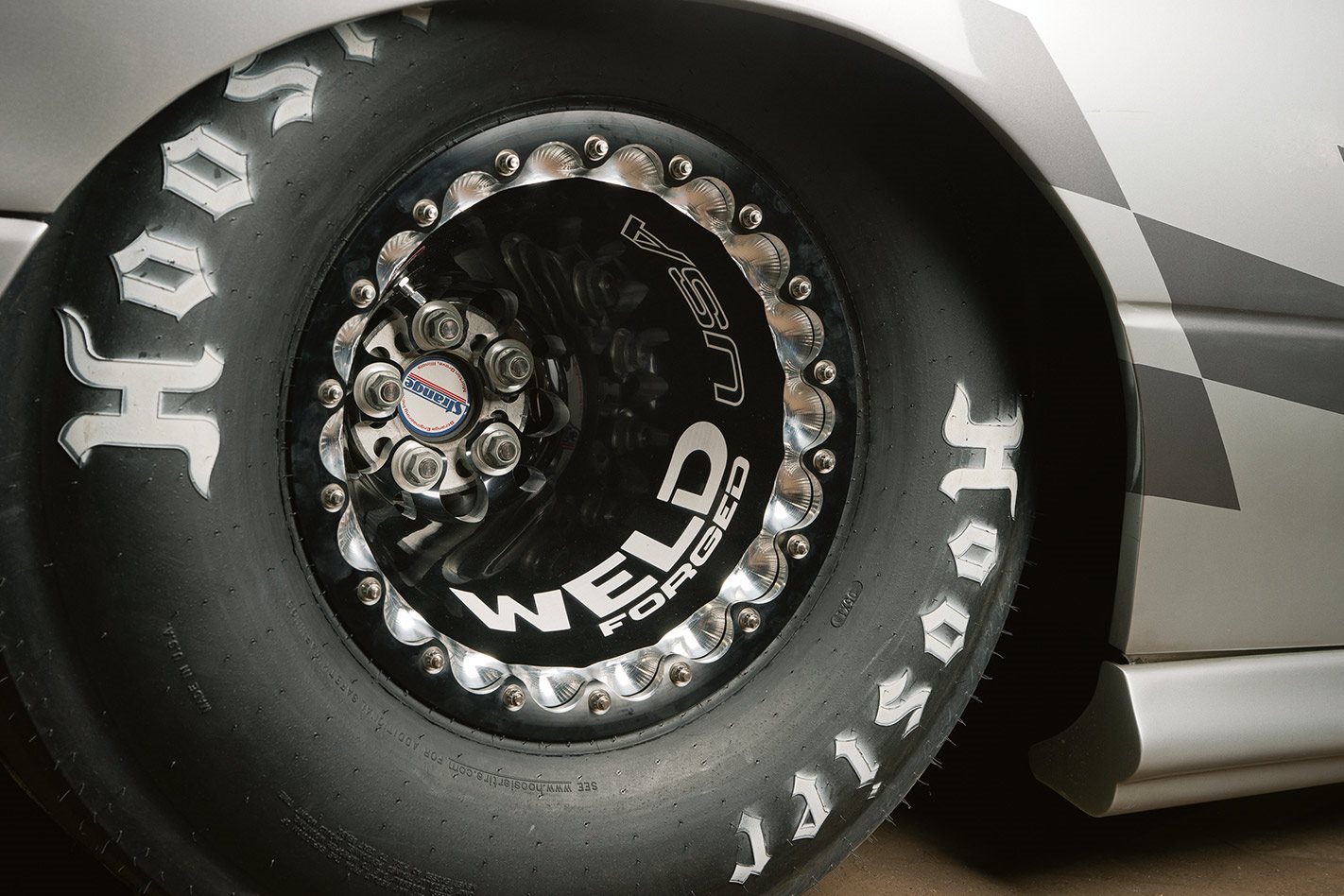 So, it’s sounding like all Rob did was buy a race car and chuck a new engine in it, but that’s far from the case. It was already a good thing, but Rob had a few ideas of his own and commissioned Hutter Performance to do the work before it shipped. “I changed the front suspension, the wheelie bars and the wheels, put a titanium pedal box in it and basically tried to get as much weight out of it as I could,” he says.

Unfortunately, after some impressive performances during testing, the powers-that-be have decided that Rob needs to put 150lb of weight back into the car. It might be because the car 60-foots as quick as a Top Doorslammer, and they don’t want to be stealing too much thunder from the big boys. 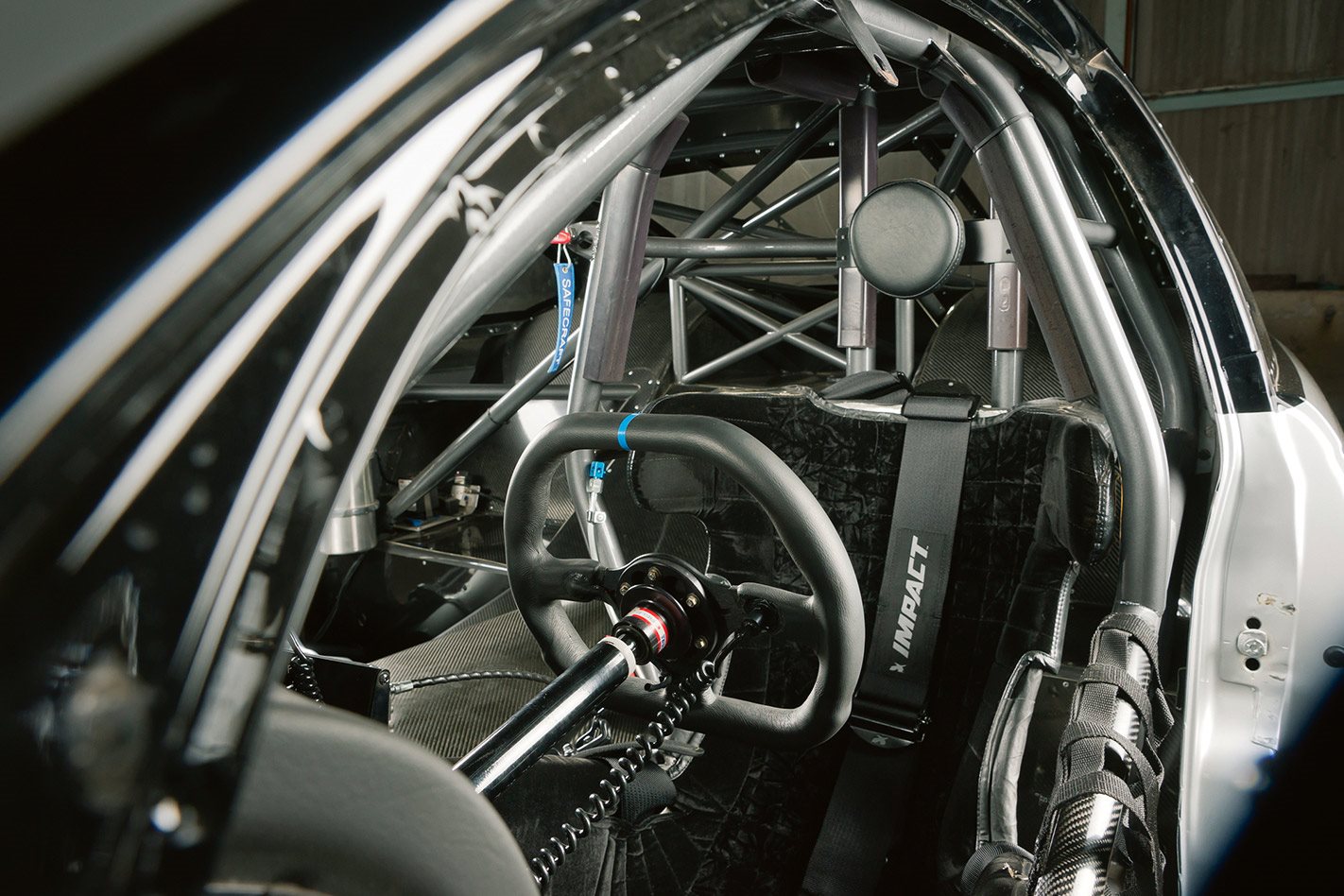 With the aim of having the quickest LS-powered car in the land, Rob’s got his work cut out for him chasing the boys at CV Performance. One thing is certain, the competition will bring out the best in everyone, and who knows, an Aussie might end up having the world’s quickest LS before long. That would be cool.