Built as a streeter, Anthony Fabris's Holden HK Monaro ended up so good he barely drove it

Looking back on Anthony Fabris's Holden HK Monaro. Built as a streeter, it ended up so good he barely drove it

THE theory of evolution explains that our parents determine our genes. I spent my first years strapped into the rear seat of Mum and Dad’s HK Belmont so I bleed red, not blue. In my teens, I jammed my P-plates behind ‘Betsy’ Belmont’s bumpers and inspired by my collection of Street Machine magazines, I dreamed of making Betsy look really nice, though that never happened. 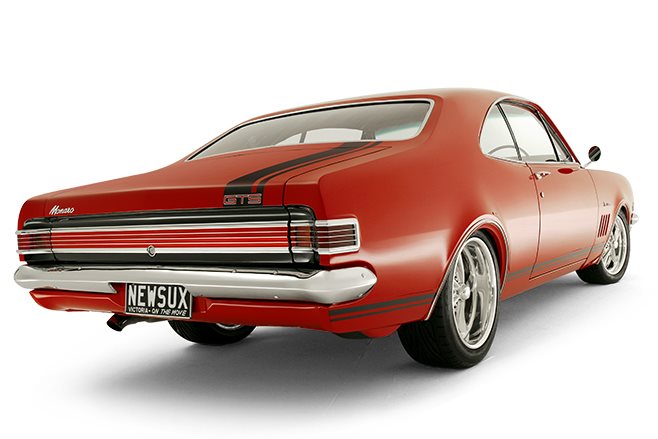 So, yeah, HKs are like family to me. That explains my excitement when I first met Anthony Fabris’s stunning resto-custom HK Monaro. It’s the latest in a line of GM street metal that Fabris is responsible for which, although varied in theme, is consistent in its high quality.

Anthony bought this Monaro from its original owner, a Victorian farmer.

“I’ve always liked the HK Monaro,” admits the Melbourne street machiner and home builder. “It’s the first of the line. When I saw one in the Trading Post I decided I’d buy it and build something I could drive.” 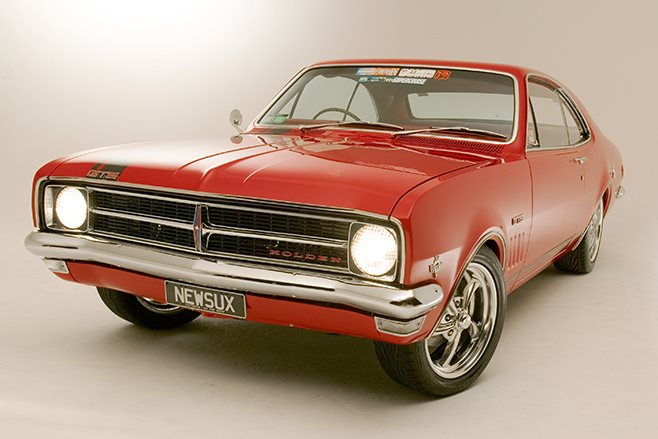 Anthony’s a hands-on man when building his cars, doing as much as possible himself in his own workshop, while commissioning experts to perform the specialist tasks. He sums up his involvement best himself: “The only things I didn’t do were the paint and the interior. Everything that’s not red, I painted.”

The Standox Formula Red was applied by Max at M&R Motor Panels in Brunswick, Melbourne, who also painted Anthony’s Walkinshaw more than a decade ago. There are no sheet-metal changes to the body; Max and the M&R team merely lightly fettled the panels before painting. 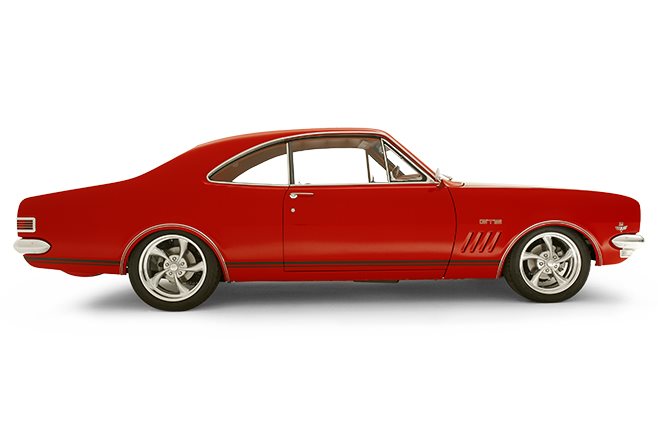 “I didn’t want to chop into anything or mini-tub it,” says Anthony, quite sensibly. “Even the battery is where it’s supposed to be.”

With two cars’ worth of components to work from — a six-cylinder Monaro was purchased as a parts car — trim and panels weren’t much of a problem but Anthony did have to spend some wallet-wilting cash on a few components. 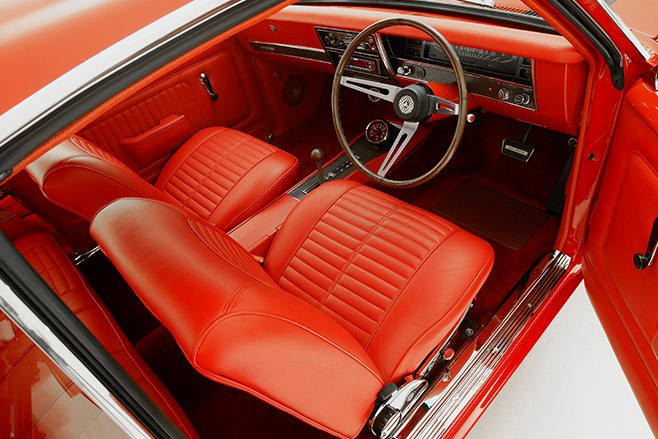 “I bought the boot lock ring off eBay,” he says. “That was a GTS-only item, brand-new, new old stock. Three hundred bucks. The gear knob was another $300. Some other parts were easier — I bought plenty of parts from Phil Bartello, a well-known HK-HG specialist down here.”

Anthony buffed and polished most of the HK’s Monaro-only stainless exterior trim himself. “Some of the more pitted pieces were fixed by a bloke in Mount Gambier, Ashley Ward, an ex-jeweller. He got it all looking much better than new.” 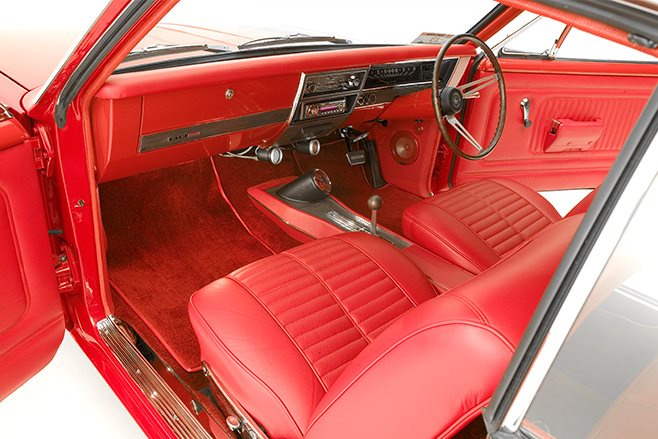 The richly-textured cabin best defines the ultra-factory theme of the car.

“It’s all the original interior but in leather,” says Anthony. “It was all done by A-Grade Motor Trimmers; they did the Chev too.” 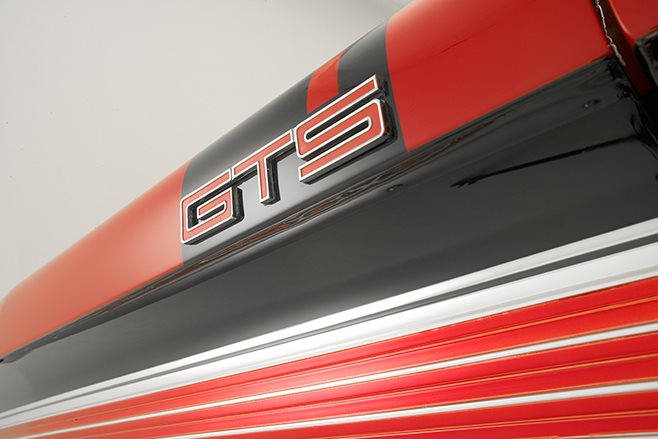 Re-chroming has revived the edges of the speedo, heater control bezels and interior lights, while repainting the suede black clock faces completed the detail. The tacho uses brand new VDO internals hiding inside the classic — but flawed — Smiths original. The only deviations from standard inside this Monaro are two extra gauges, for oil pressure and temperature, hanging above the tacho.

Up front, the engine is a 2004 GM Performance Parts small-block Chev, straight from the crate — well, except that Anthony required a CRS-modified sump to suit the HK’s front crossmember. Why not fit a regular HK/Chev sump? 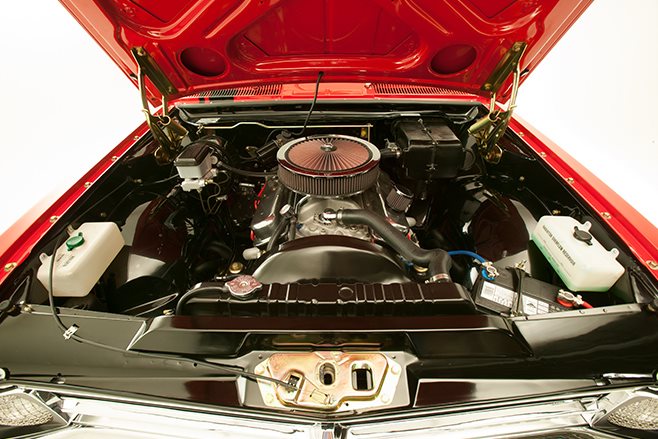 “The one-piece rear main seal,” says Anthony. “There are lots of updates in this engine compared to the 60s and it’s all brand new. Really, it’s not worth rebuilding an old engine unless it’s matching numbers or you’re chasing big power and need the hardware.”

Before installation, the crate donk was wired and fired on an engine stand. As it turned out, this one had a small oil leak from the timing cover. But why not use the injected Holden Gen III? 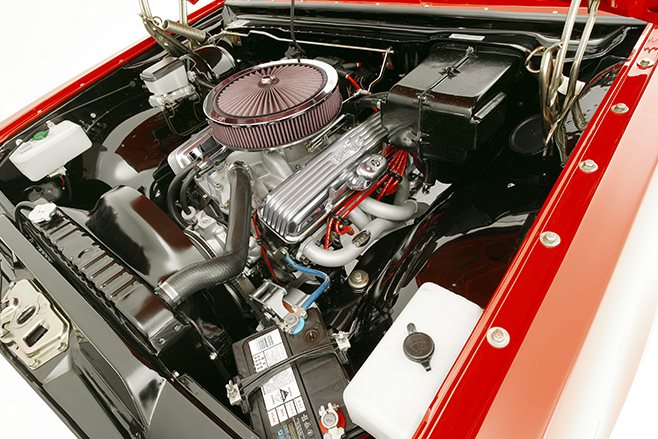 “I didn’t want to spend too much money and I wanted to keep it simple.”

Feeding the crate engine is a Holley 750. All components, standard and aftermarket, have been subtly detailed to provide the pristine ultra-factory appearance. With little more than a stocko air cleaner in place of the K&N, and a set of painted rocker covers, this engine bay could win a concours.

The muscle mumbles through a set of Genies and a single stainless 2.5-inch mandrel-bent exhaust. Power? GM’s performance division claims 330hp at the flywheel on unleaded. Anthony can’t argue. 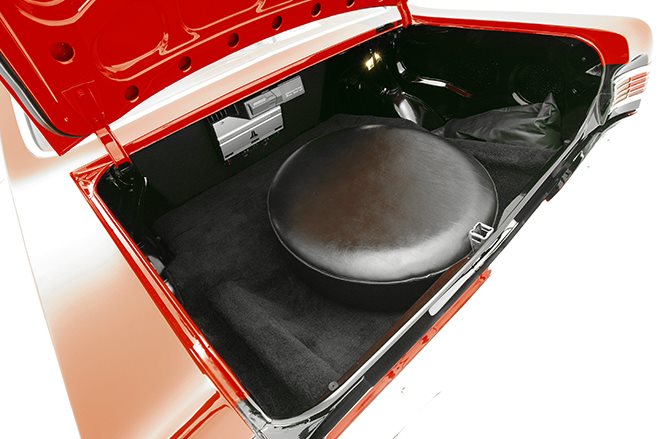 Although there may be a 350ci V8 where the factory installed a 327, the driveline represents a bigger step away from the HK’s original specs. Jim Walton, of Jim Walton Trans in Heidelberg, Melbourne, an old drag racer, built the TH350 three-speed transmission behind the Torque Converter Engineering 2800rpm stally. The rear axle is a 31-spline nine-inch built by Street & Strip inside a CRS housing complete with Commodore discs. The front brakes are alloy-bodied WB Holden calipers over vented Leyland discs, visible inside the 17x7 Billet Specialties wheels (rears are 18x9). Anthony installed Koni dampers, nylon bushes and CRS lowered spindles too. 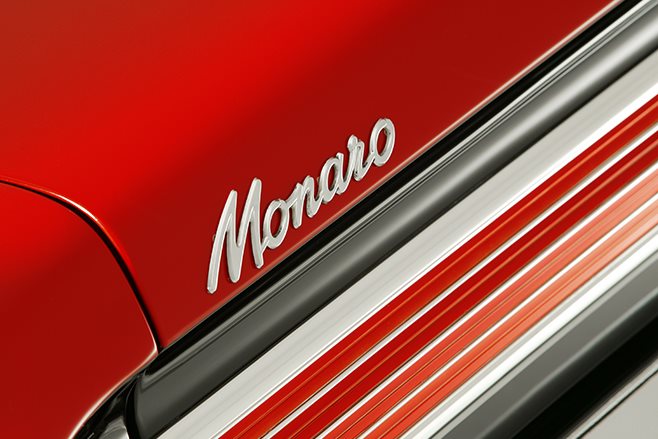 Underside, everything has been street detailed.

“I stripped it to bare metal then painted it with Stoneguard and black two-pack,” says Anthony. “You could eat off it but I didn’t go nuts with colour or detail. I did the shocks and the sway bars and some other bits in silver two-pack. All the bolts are cad-plated; that makes them a gold colour.” 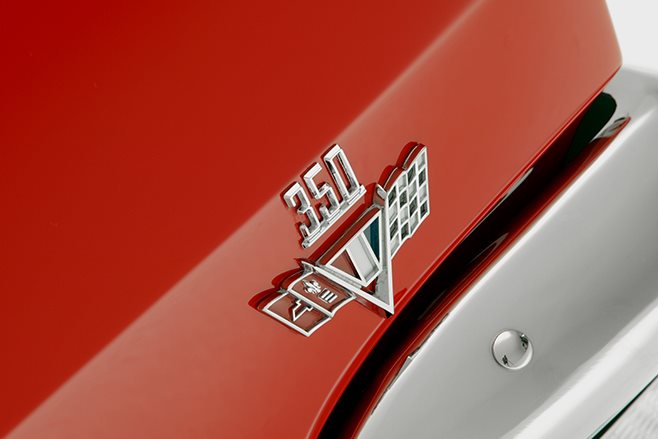 After several holidays and car-buying trips to the US over the years, Anthony is considering shipping the Monaro to the US for one of the greatest drives on the planet — the Hot Rod Power Tour. That will go a long way to addressing the fact that the Monaro has been driven only a couple of hundred clicks since its debut at Summernats 2006, despite Anthony building it as a driver.

“I haven’t driven it anywhere,” he says. “It just turned out too good!”

Anthony Fabris was the first-ever Horsepower Hero after winning the dyno comp at Summernats 9 with his supercharged Holden VL SS Group A Walkinshaw. 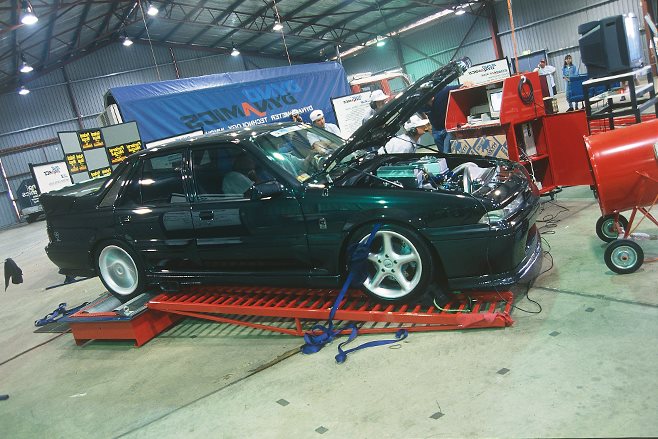 This bitch black beauty also put on an enviable smoke display in the burnouts and lives on — rebuilt and re-specified with twin turbos and 1000hp — in the hands of Canberra’s Steve Santos (SM, July 2006). Anthony also crafted one of Australia’s most appealing Tri-5 Chevs, debuting his 502-powered ’55 at Summernats 2000. It secured a Top 20 award with its near-perfect factory-style body and paint laid over the upgraded big-block powertrain, and ran Harrop brakes.