WHY these Ford Futura Sports Coupes aren’t more popular Down Under is completely beyond me. They’re just like our beloved XR Falcon sedans, but with two less doors and stylish Mustang-like rear flanks, they’re arguably way cooler. 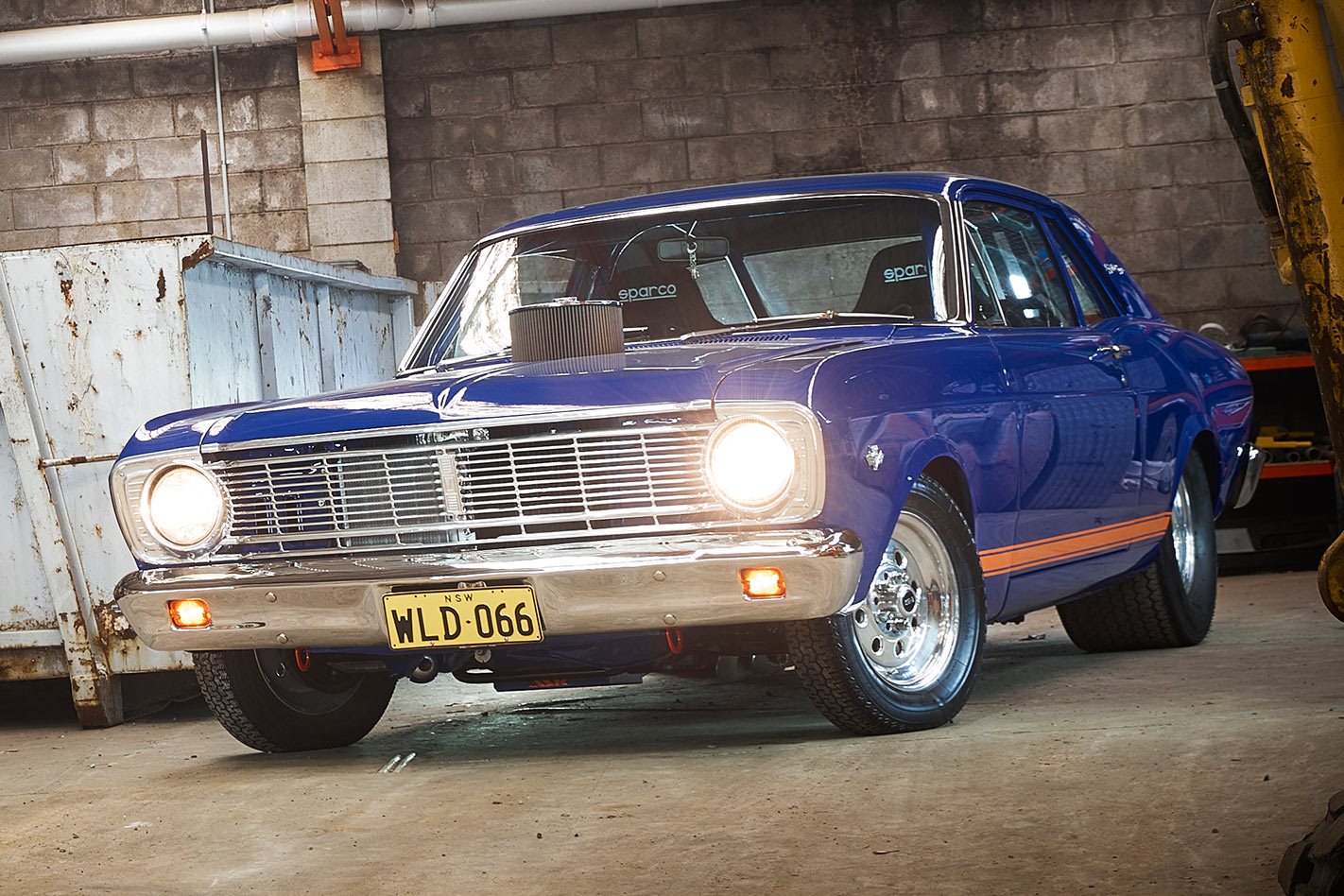 They’re not especially sought after in the US either, and therefore are relatively cheap to acquire and easy enough to ship out to Australia. You could convert one to right-hook with factory parts and create a two-door XR GT tribute, or do as Nick Labara has done and elect to build a fat-tyred, big-powered pro street stonker. 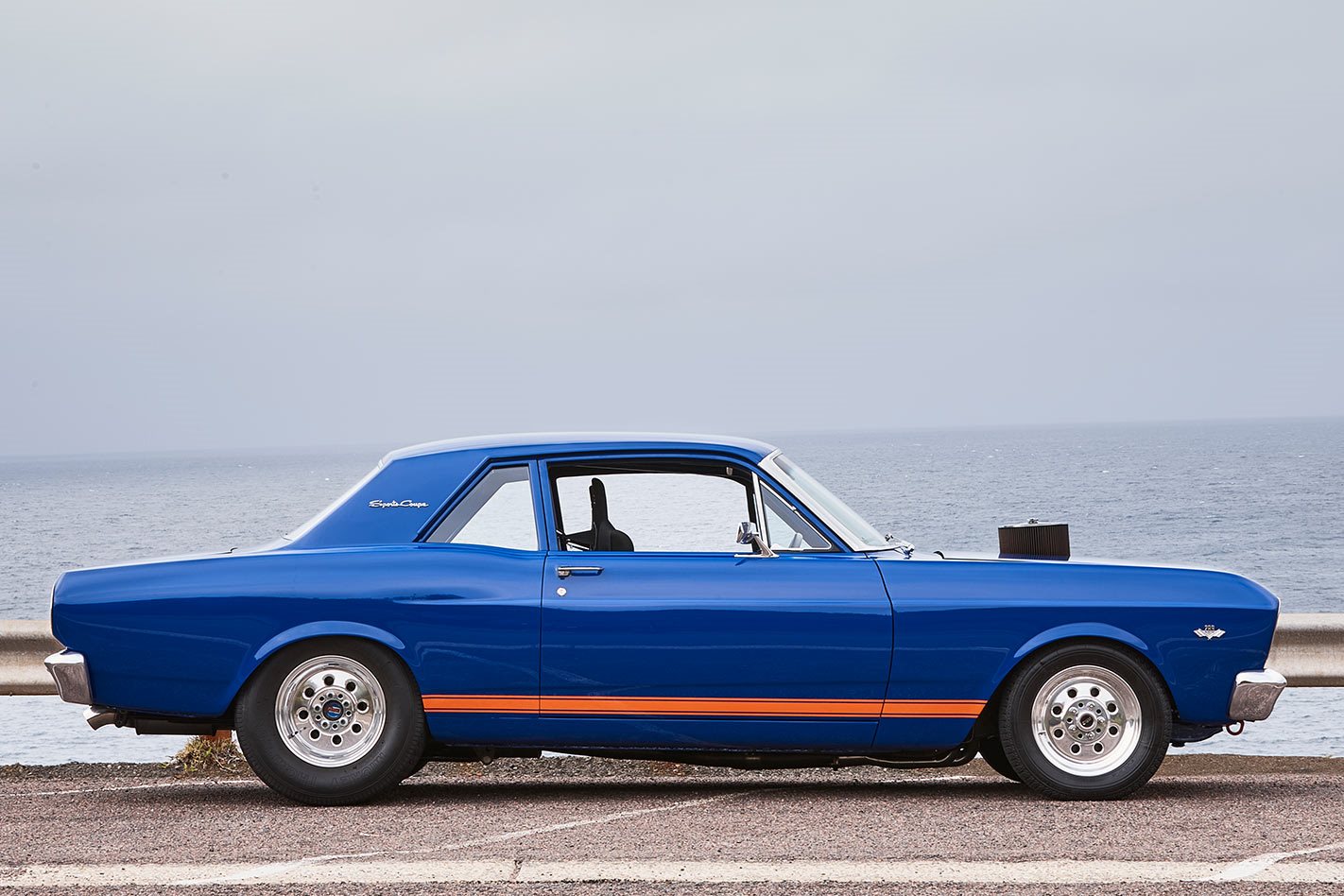 The team at Exclusive Customs laid on the wonderfully bright custom-mixed paint, called Dannik Blue, along with orange GT stripes, which help Australianise the look

Nick had been hunting for an XW-XY Falcon for a couple of years to no avail when he chanced upon this ’66 Futura Sports Coupe for sale locally. Still left-hand drive and fitted with a 289ci Windsor, Top Loader and nine-inch combo, it was painted metallic blue, in great shape, and tubbed to accommodate a set of hefty rear tyres.

“Right from the start I wanted to race it to see what it could do,” Nick says. “I put a C4 in it and took it to the track and all we could achieve with the 289 were 12s. That’s what prompted me to do a full nut-and-bolt restoration and up the horsepower and cubes, hoping to achieve low 10s.”

After a pow-wow with good mate Andrew Schrader, Nick hatched a plan. He would rebuild the car from the ground up, converting it to right-hand drive and transforming it into a right and proper Aussie street-and-strip weapon in the process. 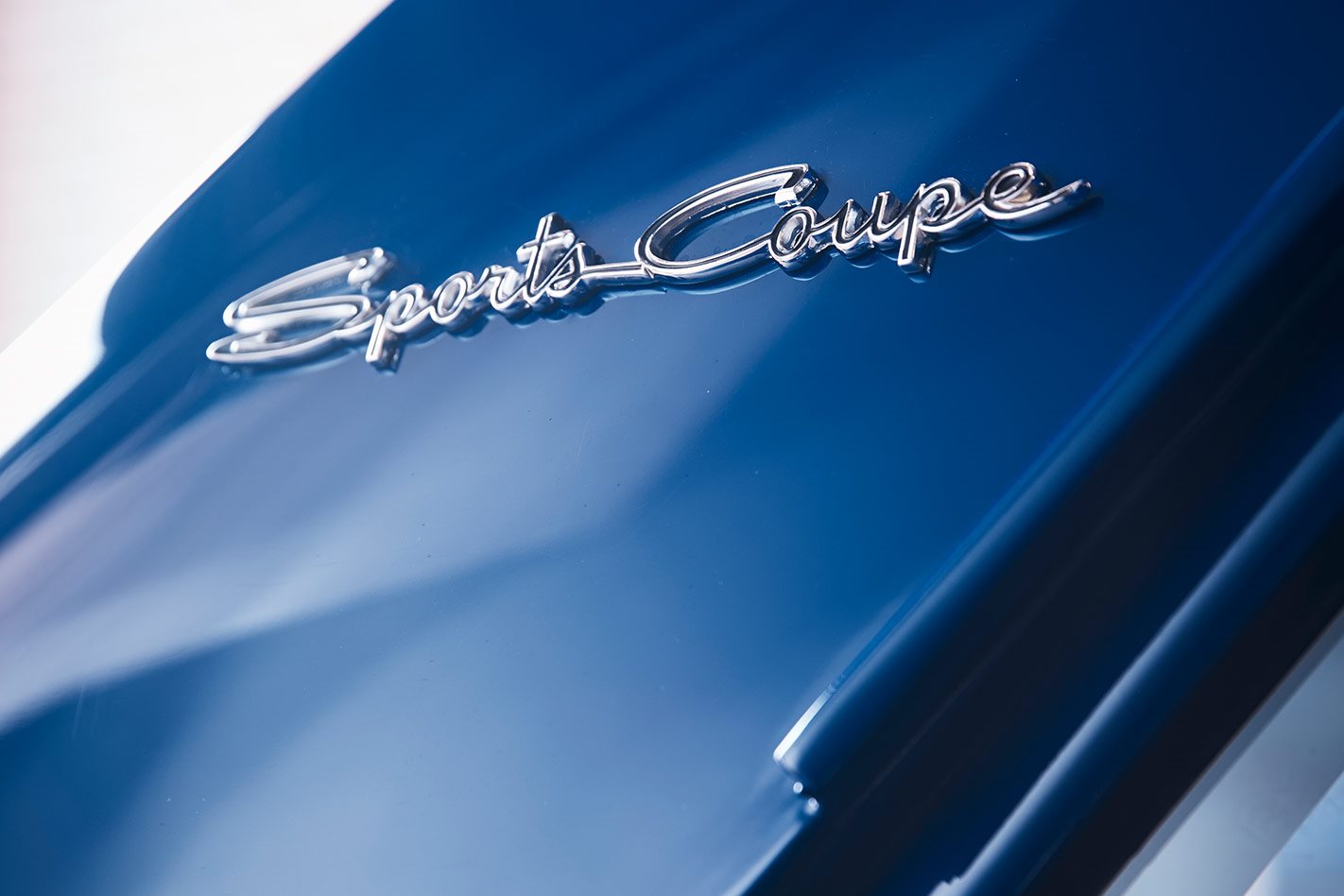 The fuel filler has been shaved but the body is otherwise standard, right down to the unique Sports Coupe badging on the C-pillars

The first port of call was Miller Chassis, where Dave was briefed on the right-hook conversion, along with strengthening the chassis, smoothing the firewall and trans tunnel, and replacing the existing rollcage with a more current, tech-inspected set-up with removable side intrusion bars. 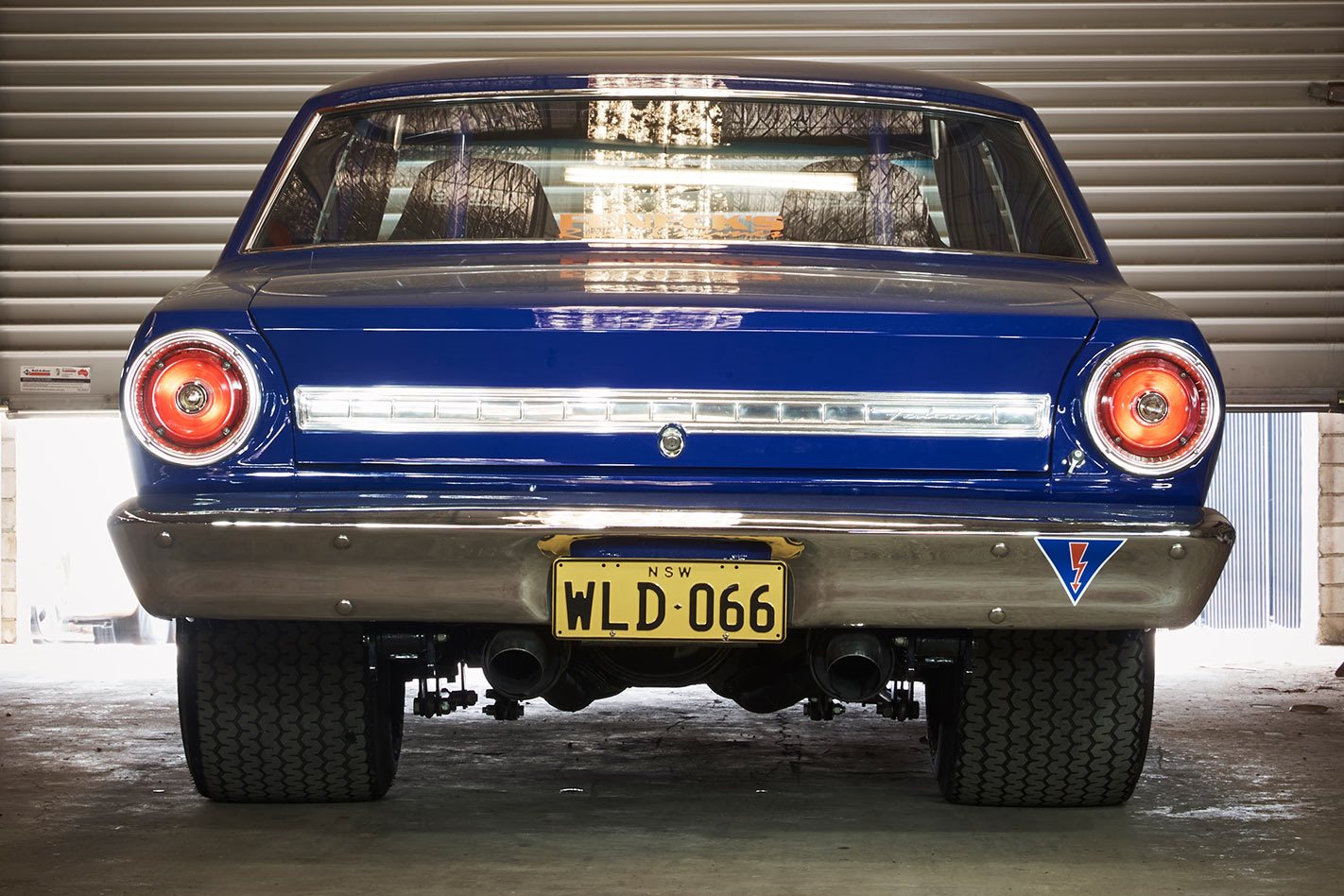 The coupe was already tubbed when Nick bought it – enough to swallow 15x10in Weld Draglite wheels wrapped in enormous 15.5x29in Mickey Thompson tyres. The rear leaf springs have been shifted inboard and decked out with CalTracs, while the dampers are from Strange. Suffice to say the car has a considerable grip on the earth

Nick was over the moon with the quality of Dave’s work, but the same can’t be said of the panel shop that first attempted the body refinishing on the car.

“After Schrader mixed the perfect colour, we took the car to a panel shop where it was resprayed, but the end result was disappointing and not worth talking about,” Nick laments. “I have to say I was shattered.” 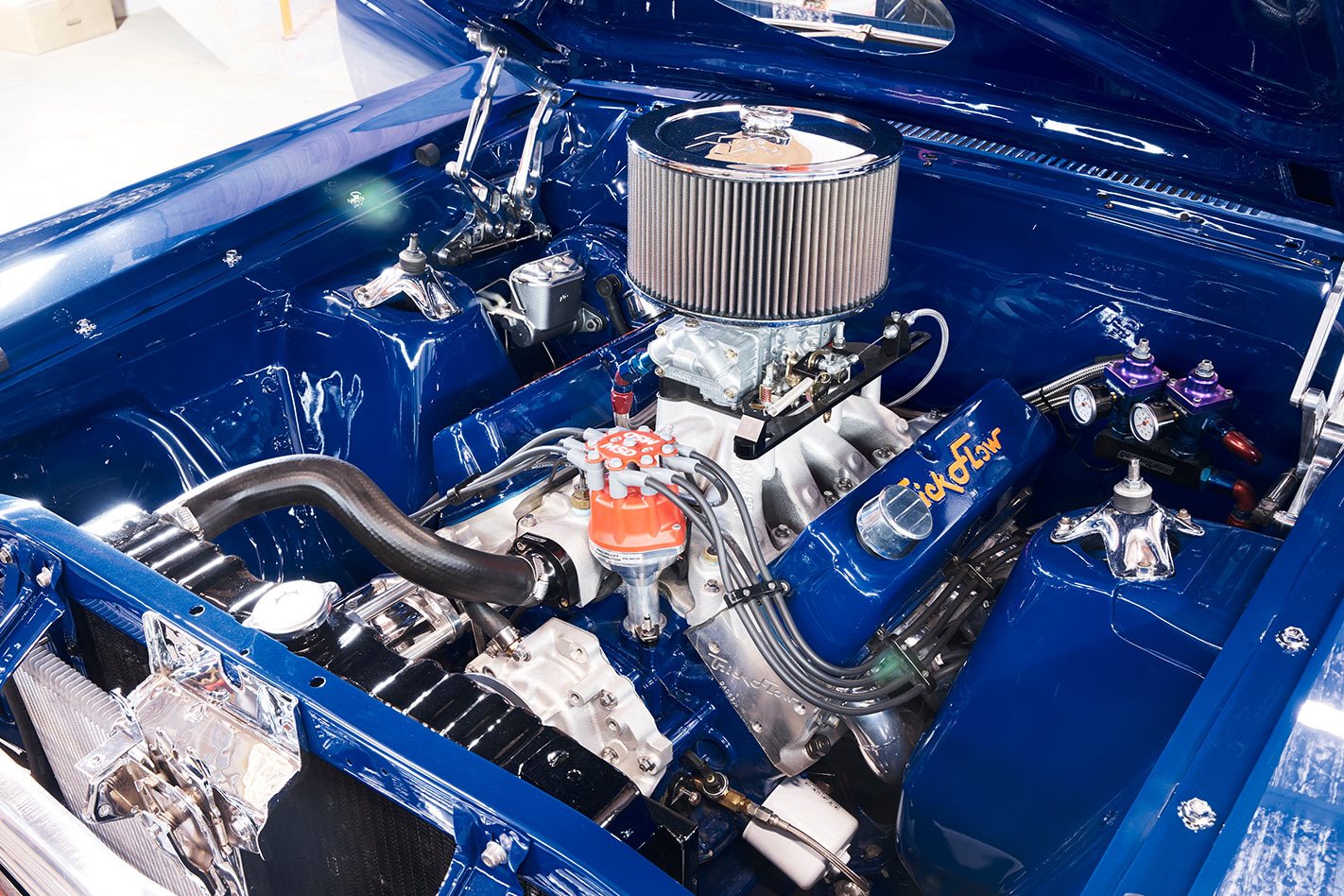 The Feneck Race Engines-built 427ci Windsor sits in a superbly presented engine bay, surrounded by a flat firewall, oodles of colour-coding and a neat set of billet bonnet hinges. It’s good for around 450rwhp on pump fuel, and it’ll make significantly more than that once the nitrous plate goes on

He did some research before calling Exclusive Customs at Heathcote, NSW, which has a reputation as being one of the leading paint and panel businesses in the custom car game. Jason Coburn from Exclusive viewed the car and discussed the best approach to rectifying the Futura’s paint and body woes, then he and brother Glenn got stuck into the job.

“Exclusive Customs went over and above to keep me happy and to complete the job the way it should have been done in the first place,” Nick says. “It came out perfect and I was very happy.” 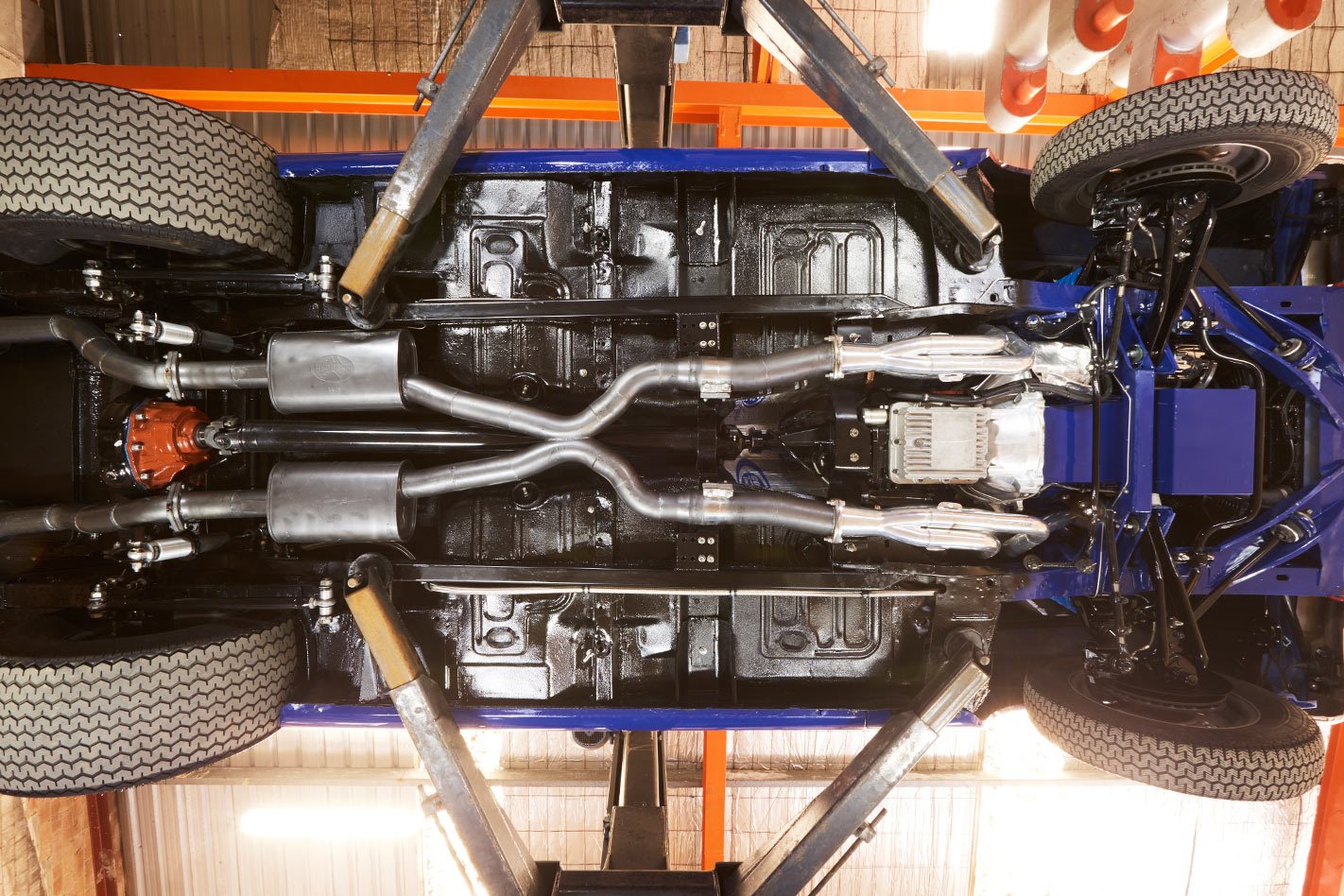 The car was taking shape, but the whole reason for the rebuild was to make it faster. To that end, John at Feneck’s Race Engines was enlisted to build a tough Windsor that would put the old 289 to shame. To a Dart block he added a Lunati crank, Carrillo rods and JE pistons for a final capacity of 427ci. The camshaft is a custom solid-roller, while the heads are Trick Flow High Port items, topped with an Edelbrock Super Victor and 1000cfm Holley carb. It’s a stout pump-fuel combo that spun the chassis dyno to the tune of 448rwhp, with tyre slip on the rollers. 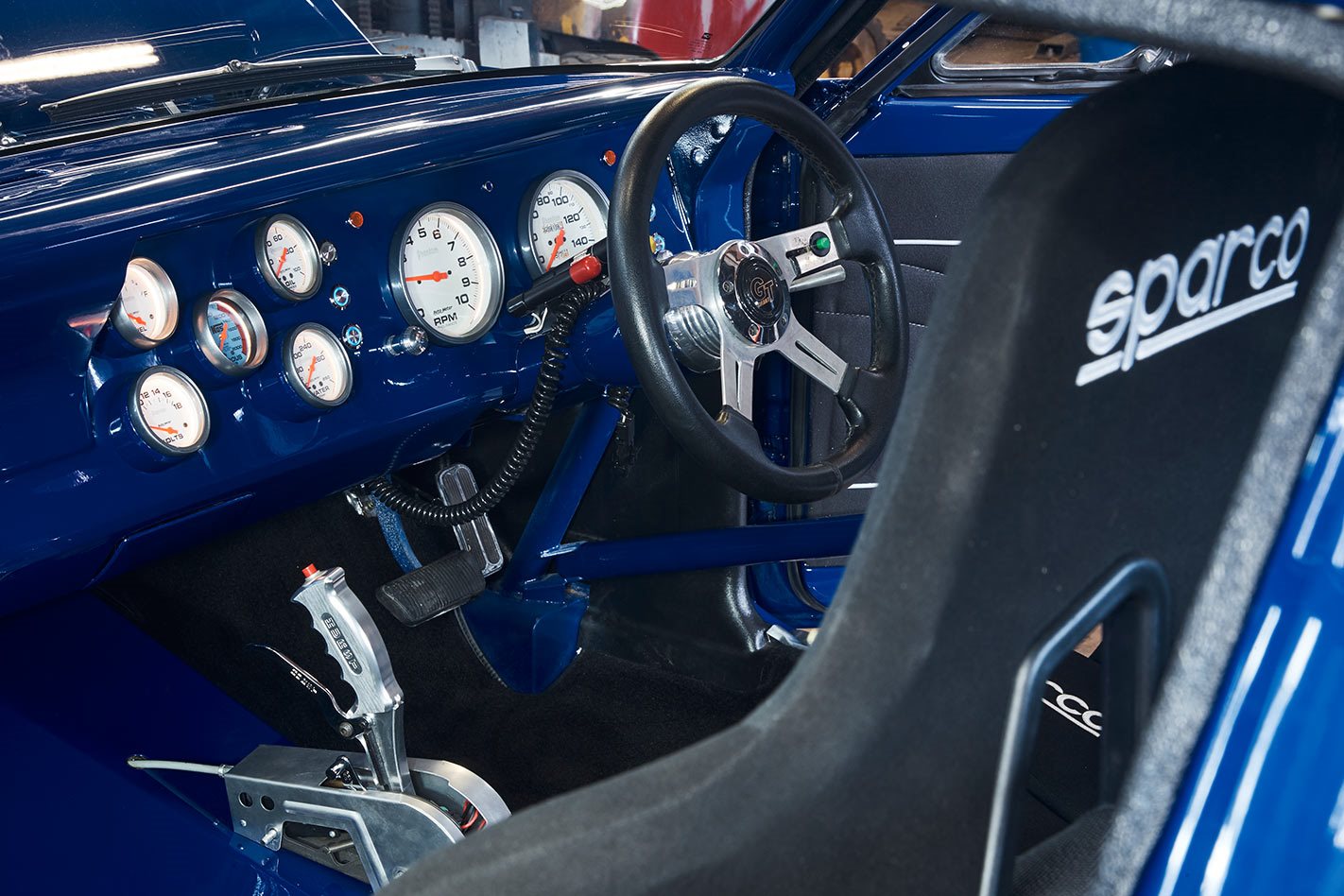 Sparco Evo 3 seats are decked out with RaceQuip harnesses, and there’s a full ’cage with removable side intrusion bars by Miller Chassis

“John was meticulous in the way he built the engine and his work was flawless. There really are no words for what he did for me,” says Nick. “He was a major part of the set-up of the running gear and I can’t thank him enough.”

The engine is backed by a 4800rpm TCE converter and transbraked C4 transmission, with a braced nine-inch rear end equipped with a Detroit locker, Currie axles and 4.3:1 final drive gears. 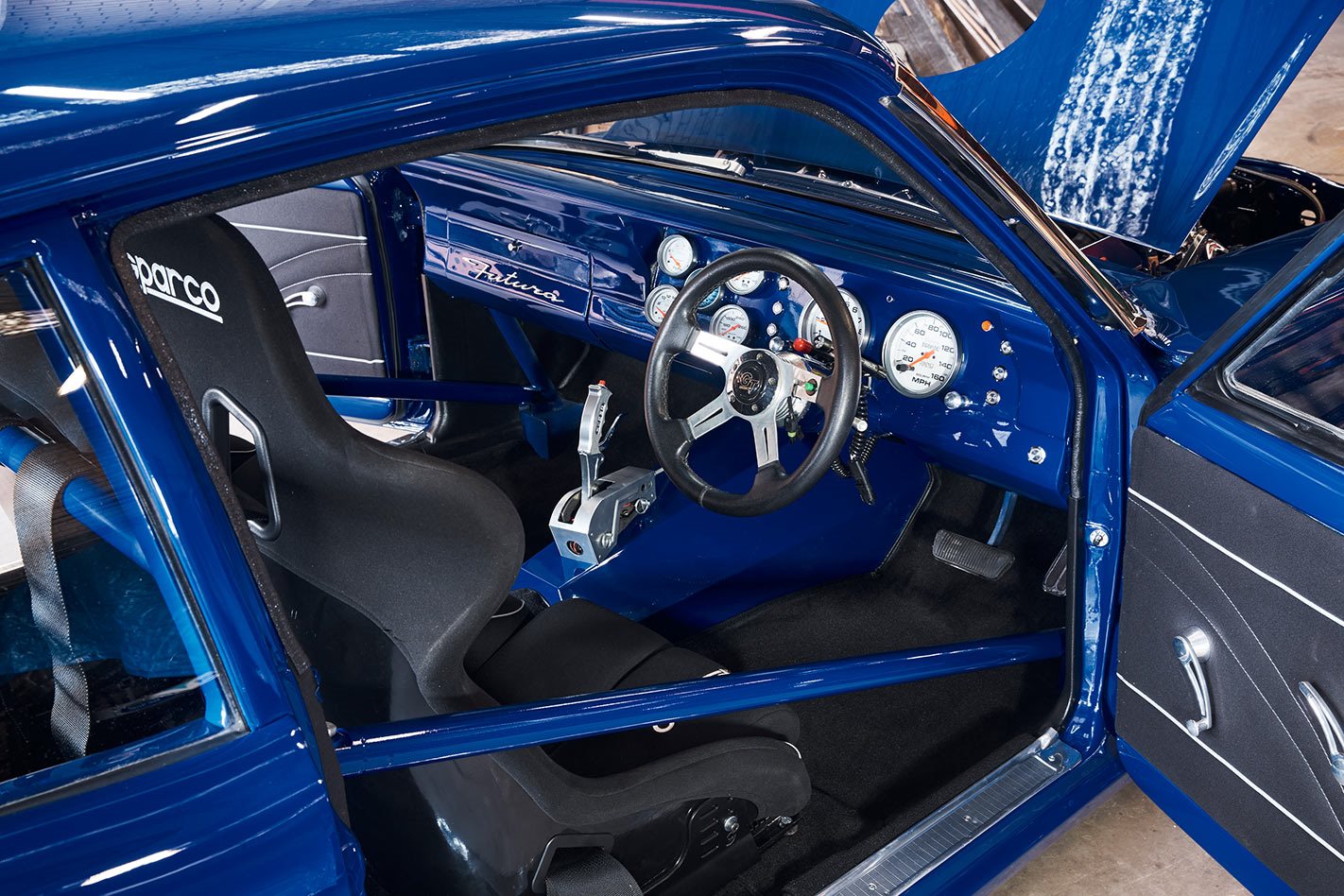 A&T Auto Trimmers in Kirrawee looked after the black velour re-trim, including the custom door cards

Straight off the trailer, the coupe came dangerously close to realising Nick’s goal of a low 10 on the first pass, with a 10.50@127mph. He’s hoping tuning and set-up tweaks will yield an extra few tenths, and as soon as he coaxes a 10.2 out of it naturally aspirated, he plans to put it on the hose. “The engine was built for nitrous, so I’m really happy with mid-10s on the motor so far,” he says. “With the nitrous I’m hoping it’ll run into the bottom nines.” 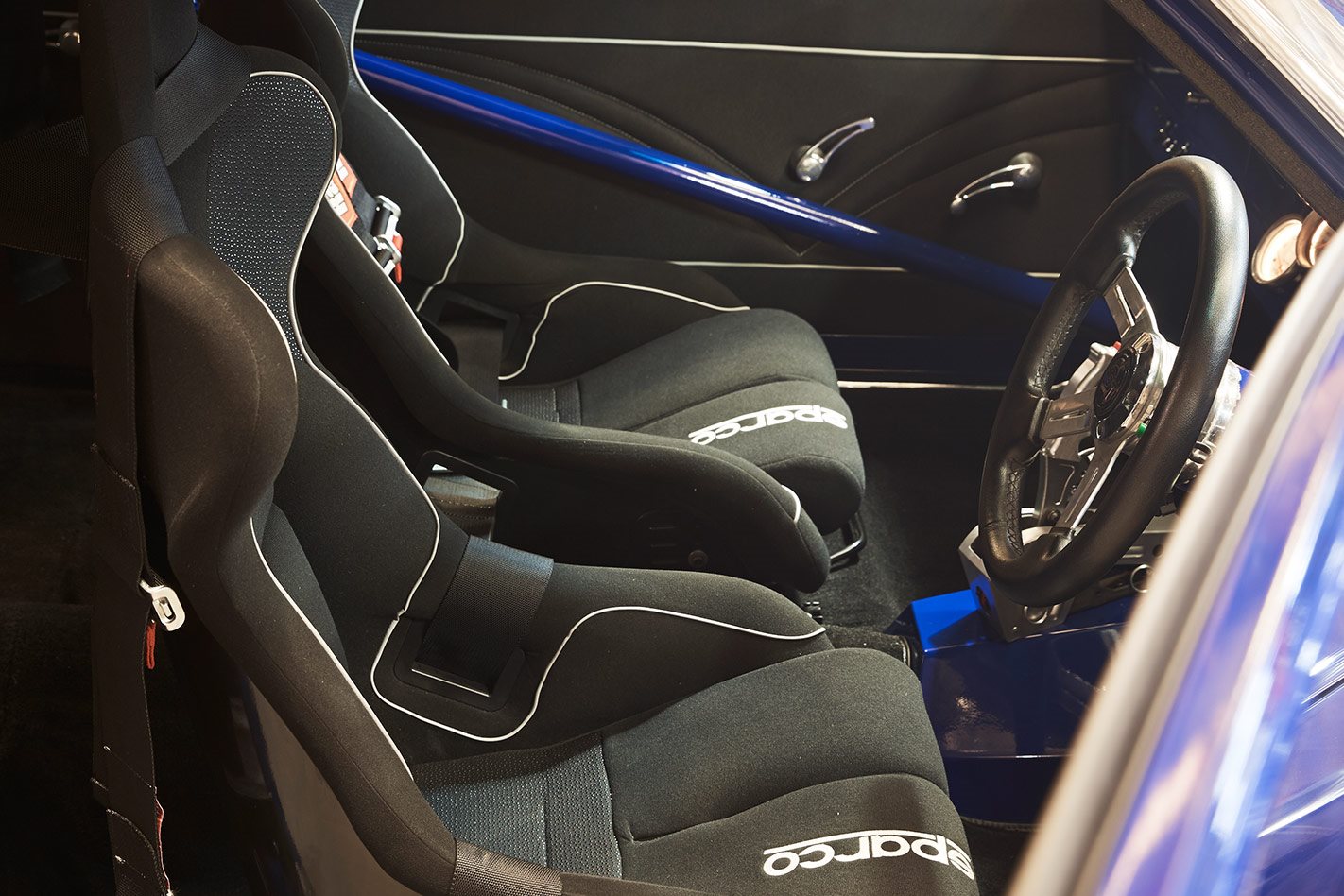 Those goals aside, Nick enjoyed the build so much that he’s already planning another one!

“After working on this car and seeing how perfect it turned out, I’m already in discussions with Andrew Schrader and Exclusive Customs about our next project, which will be a tough XW or XY streeter,” he says.

No rest for the wicked, eh?