TUNED red sixes are often little more than high-performance hand grenades. But they can be reliable tyre-shredders, as Adam Slorach has proved. The blown 202 in his famous NUMNUTZ HR ute makes 435hp at the crank and cops a thrashing at burnout competitions all over the country, yet he does it all without building a new donk every other show.

Not only has Adam won the Street Machine Summernats burnout comp with his smokin’ six shooter (and taken out the six-cylinder class three times), but he’s also notched two Top 10 finishes in the world’s biggest burnout competition —Burnout Masters. And while Adam has had a quiet 2016 on the burnout scene, he’ll be back with the ute at Summernats 30.

So what made him choose a Holden six over, well, just about any other engine in existence? 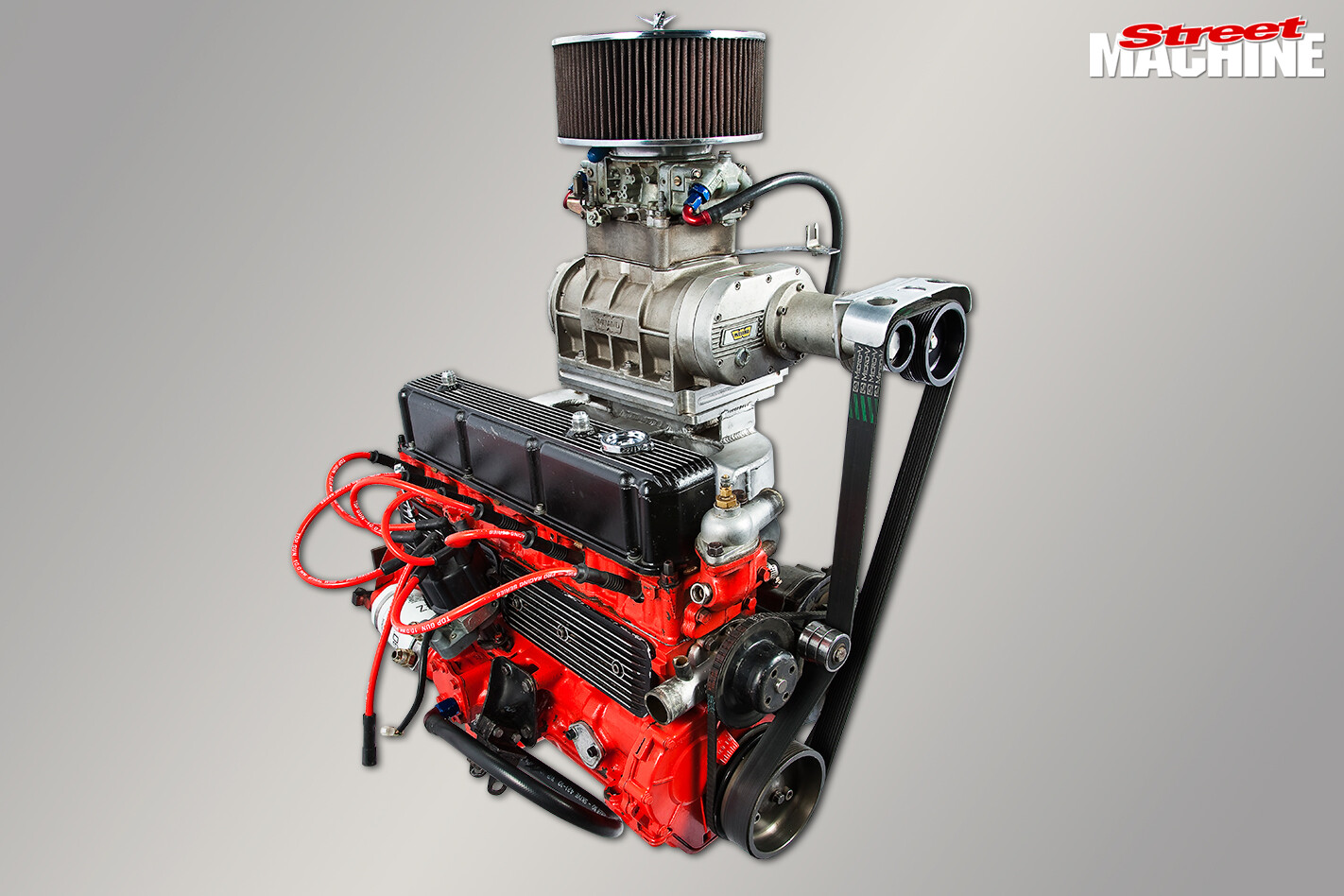 The blower kit itself started off as a Weiand 177 small-block Chev set-up, with a 10 rib belt. They've since customised it to feed the little 202-cuber with 14psi boost

“It’s what I had and something I liked. I’ve seen so many people give up on them,” he says.

Adam didn’t develop this winning combination on his own; he’s had a fair bit of help from Rod Rainford at Advanced Engine Developments. In sorting out how to keep it humming, they’ve come up with a perfect compromise between power, longevity and price. It’s such an attractive deal that they have some customers keen on similar combinations.

Adam starts off a build by selecting a blue or black motor block. Why? “They come with the good crank and rods.”

He doesn’t believe in using unobtainium parts in his 400hp builds, so you won’t find anything more fancy in the bottom end than a set of Starfire rods with ARP rod bolts and a blue or black motor counterweighted crank, which they nitride before fitting. As you’d expect, they use ARP head stud and main stud kits throughout the engine but other than that there’s nothing too exciting about the reciprocating assembly; even the pistons are boring. 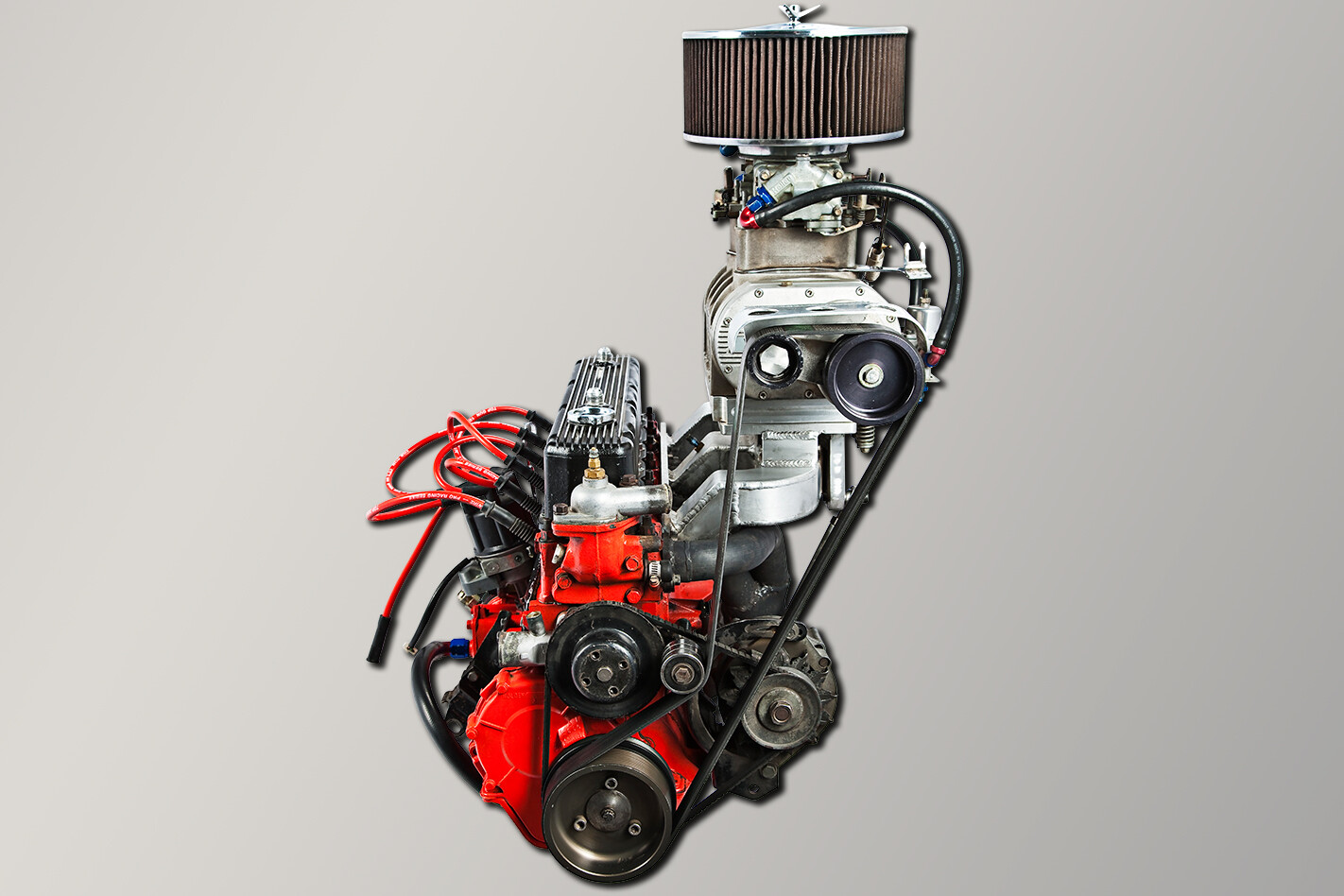 “We’re just running muck-metal pistons. You can put $1000 pistons in them but the block is always the weakest link and the pistons will only fail if you get the tune wrong or if you spin it too hard,” Adam says.

Instead they take a set of $300 flat-tops and machine dishes in the tops to yield a compression ratio of about 10:1.

Sounds high for a blower, and it would be for pump fuel, but Adam runs methanol through his screaming six and that’s a lot more forgiving when it comes to the big squeeze and bang.

If you’re surprised at just how pedestrian the bottom end is, it’s even less thrilling at the top. No late-model 12-port or trick alloy heads here; Adam runs nine-port red heads with copper head gaskets, though they do O-ring the block and head.

While the head that’s on his current motor runs XU-1 valve sizes and has received a fair bit of work in the ports and combustion chambers, he says the head from his previous build was so simple that you’d wonder how it ever made 400hp — but it did. The fully ported head pushed it up to the 435hp mark.

The valve springs are beehives like you’d find in any LS1, and Adam mates them to decent retainers, locks and Yella Terra roller rockers. “The valve gear does get a fair pounding,” he laughs.

Continuing the ‘nothing special’ theme, the camshaft is a solid Crow custom grind with about 0.550in lift.

2
The blower intake is a custom sheet-metal unit built by Adam's mate Clinton Heywood. Inside it's all secret stuff, with baffles in just the right places to even out flow to all the cylinders

“It’s not a hydraulic roller or anything, just a flat-tappet solid cam,” Adam says.

Down below, they build a custom pick-up into the fully baffled sump, which draws oil into the pump through an external line. The burnout ute generates serious G-forces when he whips it around so oil control is important.

“If you come hooting in on a big pad like at Springnats, you’ll see the oil pressure gauge swing a little bit but unless you go dry sump, you’re always going to suffer that.”
And believe it or not, that’s the core of your 400hp motor. Adam reckons a basic engine (minus blower, manifold and carb) costs as little as $2000-$3000, which means you’re not losing the house if something does go wrong. Not that anything goes wrong these days.

“Back in 2008, I had my motor out after every single comp because of one little failure or another,” he says. “It’s taken a long time and a lot of fucking up to learn what works.”

Nowadays his ‘little engine that could’ is one of the most reliable beasts in the field. In fact, he only pulls it out to freshen it up every two years, which is why we took the opportunity to snap some shots while we could as it’s not out of the engine bay very often.

“That engine now would have done at least two Springnats, two Summernats, two Bathurst Autofests and two Mt Gambier Autofests, and that’s doing all the demonstrations. The last comp I did, I smashed 16 tyres,” Adam says. “It definitely would have done a couple of hundred tyres, plus plenty of Powerskids and all the other stuff.”